Choosing an entry-level monitor can be just as difficult as choosing any top-shelf monitor. Because you still have to make decisions about how much you want to spend on various features. Do you want G-Sync? It’ll probably cost you something like $80.

Likewise, if you don’t want a feature, knowing that can save you some money. As always, it helps to have some idea of what features matter to you.

The SB230 and SB270 are identical in all ways except one. Their names give it away. The SB270 is a 27” monitor, while the SB230 is a 23” monitor. Because one is larger than the other, the smaller weighs 8lbs, while the larger weighs 11lbs. That’s really the entire difference between them. 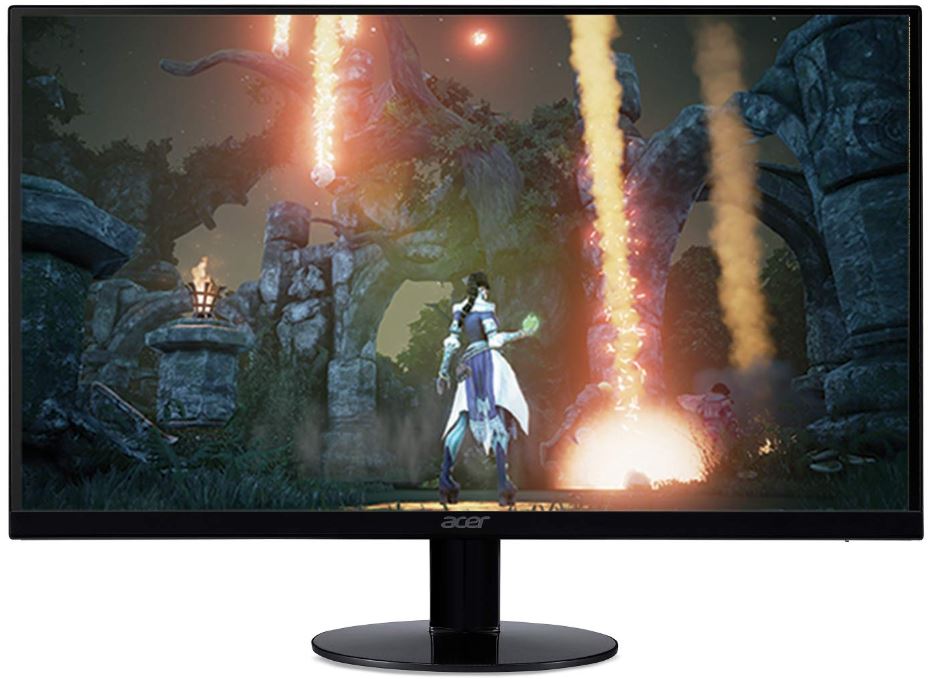 Even though these are entry-level monitors, both the SB230 and SB270 have a handful of mid-range features. Features like FreeSync, and greater than standard refresh rates. And that makes both of these panels pretty respectable, especially relative to their approachable cost.

Both the SB230 and SB270 use a very standard, very minimalistic bezel. Once again, this is heavily implied in their name, Ultra-Thin Zero Frame Monitor. Each is nearly as thin as the bezel Acer uses on their top-shelf Predator monitors. Viewed from an angle, these panels are devastatingly thin. It makes them terribly stylish, though also a little bit more fragile while you’re moving them.

There’s something else all budget-based PC monitors have in common. All of them include the least expensive, least impressive monitor stands that you can possible imagine. The stand used by the SB270 and SB230 is not an exception. It’s close to the dictionary definition of a basic monitor stand.

The small circular base doesn’t take up much desk space, and its design is made of some attractive glossy black plastic. It may attract fingerprints, but if you keep it dusted, the stand does look great. The problem isn’t appearances. The problem is that these types of stands provide essentially no adjustability.

And unfortunately, that’s pretty much the case with both the SB230 and SB270. Their absolute biggest flaw is they have no height adjustment, and only the barebones tilt adjustment you would find from similarly priced monitors. Though this problem can be avoided if you decide to remove your monitor from the included stand, and use your own monitor stand instead.

On the backside of each monitor, you’ll find one HDMI port, one VGA port, and one 3.5mm audio jack. It might be worth noting there’s no DVI input, or DisplayPort input. Though that shouldn’t be a huge issue because neither of these panels require features or bandwidth unique to those formats. You’re not going to be running 4K through these 1080p panels, after all.

You’re probably best off by connecting with an HDMI port. If you connect through the VGA port, you may end up with less vivid color, and an inability to access those higher refresh rates. That’s simply because the VGA format is somewhat old. As an older format, those cables carry limited color capabilities. They’re also incapable of transmitting sound, which is something HDMI can tackle.

Both the SB230 and the SB270 feature AMD Radon FreeSync, a dynamic sync technology. When enabled, the general idea is that your monitor will change its refresh rate to match the FPS output of your graphics card. This can prevent screen tearing, and more importantly, keep your games running smooth. 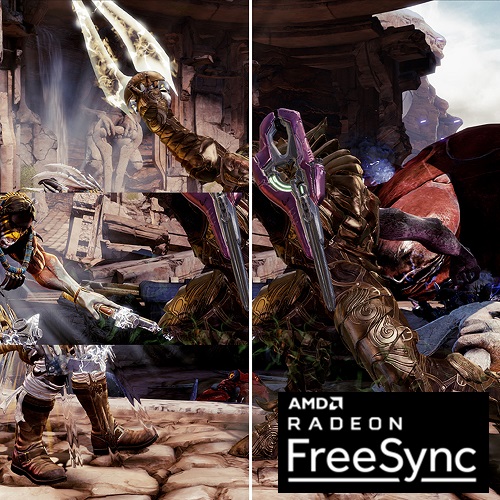 In other words, it’s a good technology to be paired up with a budget-oriented monitor. Because in nine out of ten cases, a budget monitor will be connected to an equally budget PC. When your games start dropping in framerate, FreeSync keeps everything looking considerably smoother. You can definitely still tell that your framerate has dropped, though.

You may find yourself noting, these panels do not support FreeSync 2. The second version of FreeSync has to do with support for higher color bitrates for special features these panels don’t have. It’s not something you need to think about, unless you’re willing to literally double your budget.

For most people in most circumstances, the best PC monitor screen size for 1080p content is roughly 24”. If you go much lower than that, you gain very little. And the very largest you want to make a 1080p monitor is about 27”. Beyond that, you’ll find the panel actually begins to look and perform like 720p.

The SB230 and SB270 are both at two extreme ends of this spectrum. The 23” monitor represents the best 1080p can provide, while the 27” represents the largest you can make a 1080p panel before it becomes a bad idea.

Monitors work by flashing an image at you, called a frame. These frames are shown, one after another, to create the illusion of motion. For the past two decades, a refresh rate of 60Hz was fairly standard for nearly every PC monitor. That indicates a monitor is capable displaying 60 frames per second. 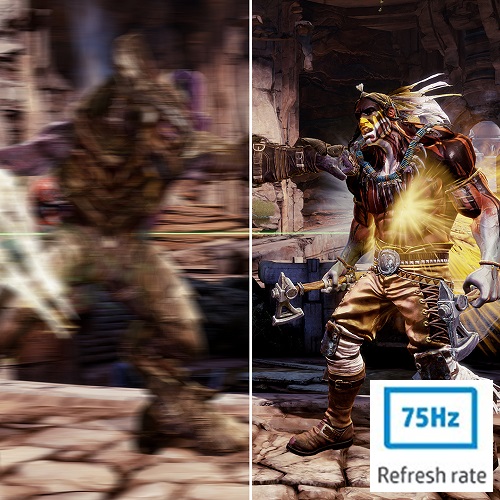 Turning to the Acer SB230 and SB270, both panels enjoy a refresh rate of 75Hz. The increase to 75Hz means these monitors will display roughly 20% more frames than most monitors. And it’s a visual difference that nearly anyone should be able to spot and appreciate. For non-gamers, it really just means your mouse pointer will feel a little smoother as you move it around. For gamers, the difference can be far more substantial.

Though either of these panels perform reasonably well with videogames, it would be a mistake to consider them gaming panels. Outside of the console space, PC gaming monitors have moved to 144Hz. Picking up a 144Hz monitor is one of those things that can quickly tack an additional $60 or so onto the price of your monitor. But if you happen to play high framerate videogames, like FPS games, it’s something you won’t regret picking up.

Moreover, both of these panels can achieve a response time of 1ms. Usually switching to an IPS panel would mean enduring response times closer to 5ms or greater. But response time isn’t something to obsess over. Though often touted as a gamer feature, a top-notch response time is actually a fairly minor bonus. 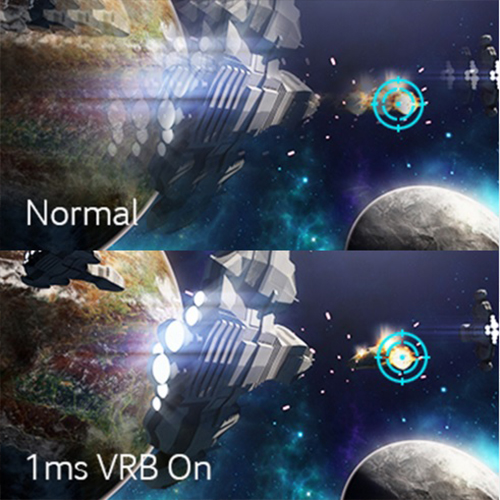 It’s something that can help marginally reduce motion blur, but the difference is so small, and occurs so infrequently, that people generally have a tough time seeing it. Motion blur is something that these LED based monitors aren’t very good at creating, but it could be more than a decade before we see anything like an affordable OLED alternative.

In any case, it’s only when response times become absolutely terrible, as they almost always are with televisions and projectors, that it becomes necessary to observe them carefully. The 1ms response time provided by the SB230 and SB270 Ultra-Thin Zero Frame Monitors go head-to-head with any of the best LED monitors on the market.

It’s something that occurs because of the way IPS panels are manufactured, so it’s not technically a defect. Usually, the bleeds are in one or two spots near the edges of a panel. And usually, it’s impossible to identify these backlight bleeds unless you really go out of your way to spot them. You might have to turn off the light in your room, and then view your monitor at an angle.

But sometimes you get a panel which has terrible backlight bleeding. Sometimes these backlight bleeds can be devastatingly obvious from a glance. Anytime you’re getting a new monitor, there’s always a small chance you’ll end up with a dead pixel in the display. That’s something you just have to accept, and be prepared to deal with if it occurs.

Likewise, anyone who decides to choose an IPS monitor should be prepared to potentially end up returning their panel if they happen to receive a panel with terrible backlight bleeding. Horrible backlight bleeding is usually removed by a quality check, especially when you’re dealing with a respectable brand like Acer. But some people have different standards about the quantity of acceptable IPS bleeding.

If you’re interested in gaming, and you’re willing to spend a bit more, it’s worth considering a 144Hz in place of the 75Hz these panels provide. But you would also need a PC that can churn out higher framerates.

Acer monitors like the SB230 and SB270 include a three-year warranty. It’s not very common for monitors to have problems that require the use of a warranty, but it’s nice to be protected. Acer also has a reputation for reasonably good customer support. 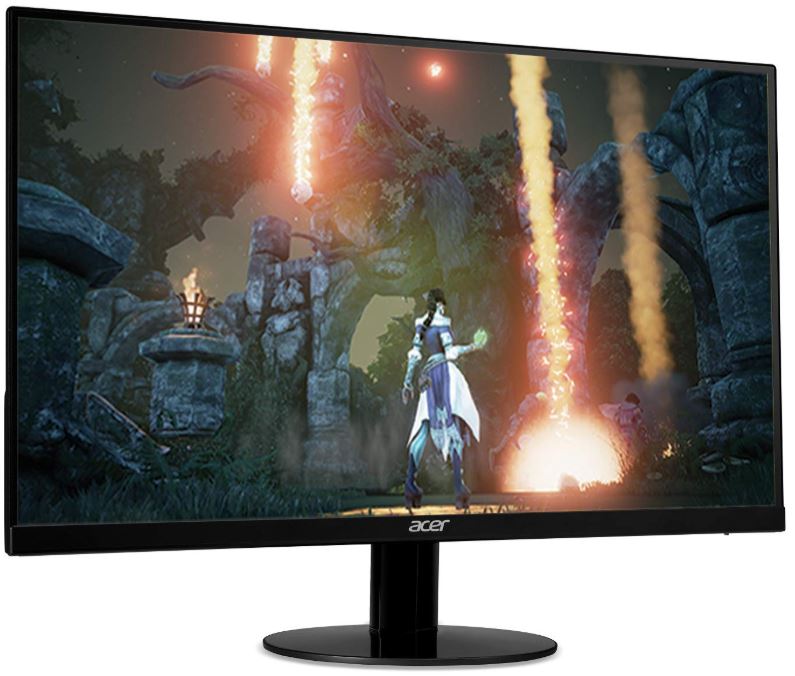 Both of these monitors were made for people on a tight budget.

The SB230 is a good choice for someone who’s sitting very close to their monitor, and someone with significant space limitations. Though 23” is a little small for the tastes of some people, the SB230 is definitely the best looking version in this series. It has all the power of the SB270, and it’s about one third less expensive.

The SB270 is a good choice for someone who wants the biggest 1080p display they can get their hands on. If you wanted to move to a 32” panel, you’d also want to upgrade to 1440p. But gaining those extra five inches is terribly expensive. You would basically need to double your budget.

In-Depth Review and Testing of the Lepow Portable …
December 3, 2019