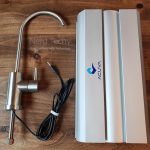 When you pour yourself a glass of water, you want to know that it’s safe. That pretty much goes without saying. The same is true when you use water to make pasta, or even just to wash your dishes. The point being, we take extra care with the water that’s going into our bodies. You might go swimming in the local lake, but you wouldn’t want to drink the water. In most places, if you’re using municipal water, you don’t have to worry about microbes. You might have to worry about other contaminants, but at least you’re safe from germs. That said, there are several situations where you might be worried about germs in the water.

For one thing, you might be using well water. Depending on where you live, that water may not be 100 percent free of pathogens. For another thing, you might have degraded plumbing, or your city’s water supply might have problems. For these and other reasons, you might have very real concerns about hos sanitary your water is. But regardless of the reason, a UV water purifier is a great way to keep yourself and your family safe. And a purifier that installs in your sink will keep your water clean where it matters most.

We’re about to review the Acuva Arrow 5 UV-LED Water Purifier. This is an ultraviolet sanitizer that kills germs in your water before it comes out of the tap. It even includes a little smart faucet to dispense the water. This is all well and good, but we wanted to take a look under the hood and find out how well the Arrow 5 really performs. We’ll look at the physical design, and how it installs. We’ll look at how it’s used and how much use it can handle. Then, we’ll talk about how effective it actually is at sanitizing. After that, we’ll know everything we need to know to give a fair judgement. Let’s get started, and see how well this UV sanitizer works!

Before we talk about the specifics of the Arrow 5, let’s talk about UV sanitizers in general. What is it that separates them from a traditional water filter? To begin with, let’s look at a countertop filter like a Brita. This type of filter is what’s referred to as a particulate filter. It’s made to remove particles, such as silt, minerals, and other very fine materials. In addition to that, this type of filter is typically made out of activated charcoal. Charcoal absorbs heavy metals like lead and arsenic that can be hazardous to your health. It also does a good job of soaking up chemical contaminants. 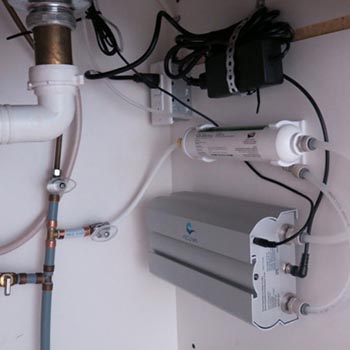 That said, charcoal filters don’t kill microbes. To be fair, they can filter out some larger bacteria. Anything that gets through is going to be very much alive. The same is true for viruses, which are too small for a charcoal filter to capture.

By contrast, UV water purifiers are engineered specifically for killing viruses and bacteria. They do this with ultraviolet radiation, a form of light that’s invisible to the naked eye. When UV radiation comes in contact with living cells, it destroys DNA, and the cells die. It has the same effect on RNA, which is the main genetic material for viruses. Either way, the result is the same; the germs are dead, and your water is safe to drink. Incidentally, UV light also kills most types of mold and algae, which can be just as dangerous as germs.

With all of that in mind, a UV purifier by itself is only capable of killing germs. It won’t remove heavy metals, toxins, or particulates. To be fair, most inline purifiers have a small particulate filter to protect the purifier itself, but that’s about it. So what do you do if you’re worried about particles and metals as well as germs? For an inline system, you could put a reverse osmosis filter in before the UV purifier. This will cost more than a UV purifier alone, but it will protect you even better. 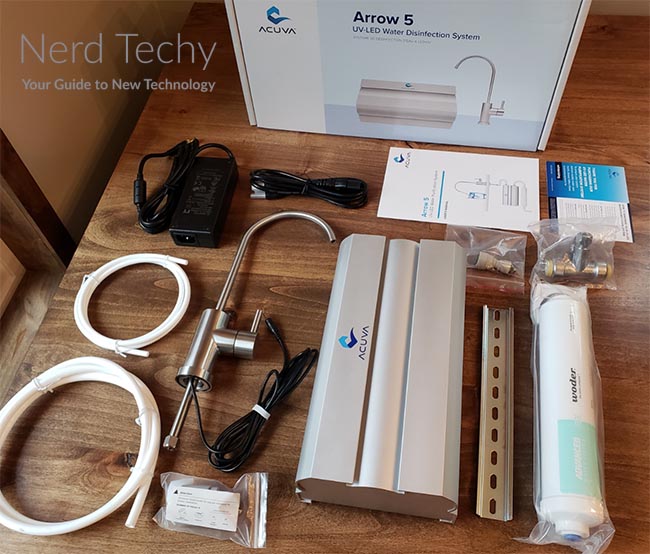 The Acuva Arrow 5 UV-LED Water Purifier is a complete kit with everything you need for the system to work. To begin with, you get the filter unit itself. The housing is roughly rectangular in shape, and measures 11 inches wide, 6.3 inches high, and 3.5 inches deep. It’s constructed from high-quality aluminum, with a durable finish and an Acuva logo on the front. The input and output connections are located on the same side, with the DC power port in between. 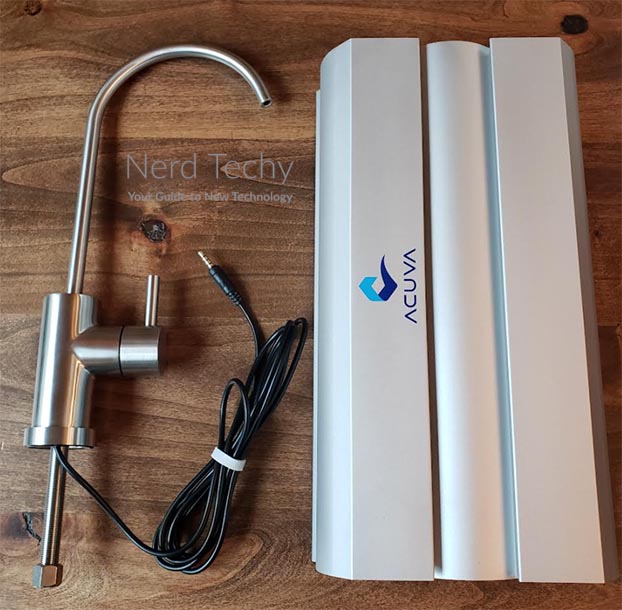 This is an in-line filter, and it connects with a PEX line, which is included in the kit. The nice thing about PEX is that it works in RVs and boats as well as in your home. So no matter what you’re outfitting, you’ll be well-prepared. In addition, you also get an assortment of valves and connectors, as well as Teflon tape. You won’t find yourself running to Home Depot to pick up that one thing you need for installation. Not to mention, the entire kit is covered by a two-year manufacturer’s warranty. If any of the parts fail, you’re protected. 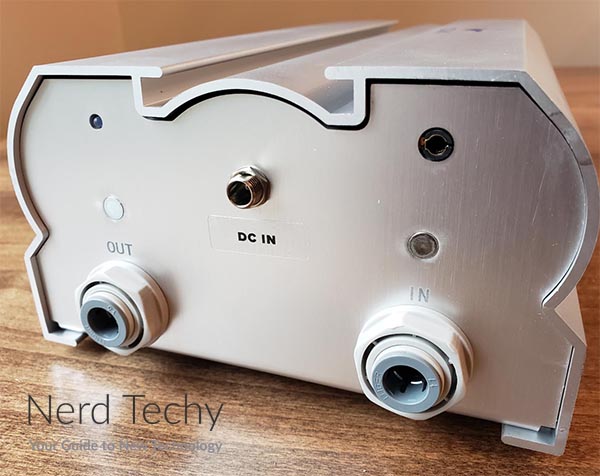 A pre-filter and a smart faucet round out the kit. The faucet has a tall, slender design, and is designed to sit off to the side of your main faucet. It’s built so that it’s easy to fit a glass or a tea kettle underneath, without performing a lot of maneuvers. The brushed nickel finish is very easy to keep clean, and matches most kitchen décor. There’s even an LED light ring around the base that lights up when the faucet is on. 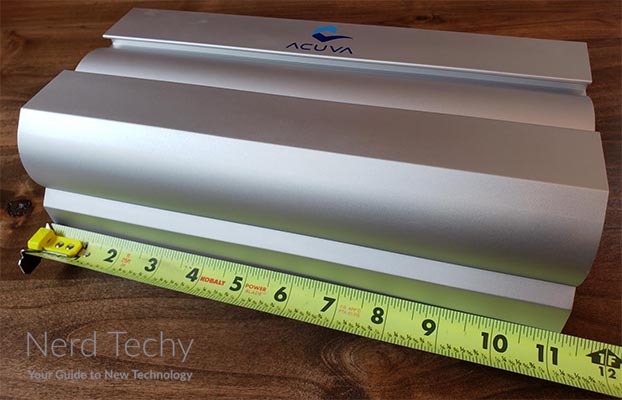 As you can see, the Arrow 5 is an installed, in-line purifier. That’s great for your home, boat, or RV. But what if you need a sanitizer for camping, or for taking on the road? In that case, you’ll need a handheld water sterilizer. These are portable, and don’t need to be installed, but you’ll need to use them manually. 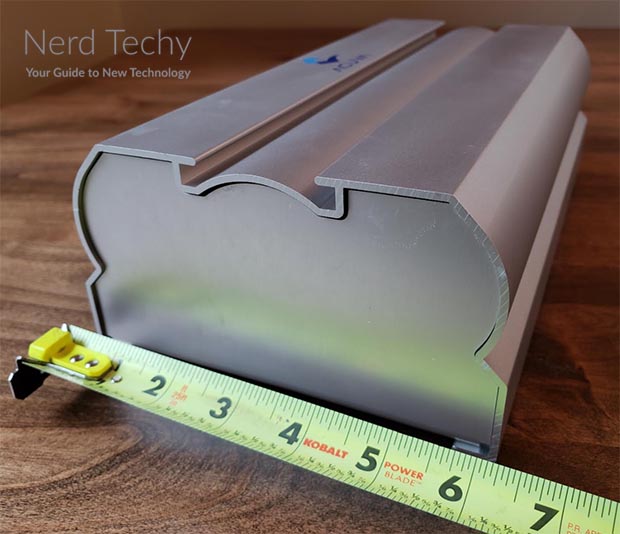 If you’re used to in-line filters delivering a slow trickle of water, you’ll be impressed by the Arrow 5. It flows at a rate of five liters per minute, or roughly 1.3 gallons. That’s a little more than half the flow rate of an ordinary faucet, so you don’t have to stand around waiting. If you’re filling a six quart pasta pot, you’ll get the job done in a little over a minute. And you can fill a 20-ounce water bottle in just a few seconds. All in all, we had no complaints about the flow rate. 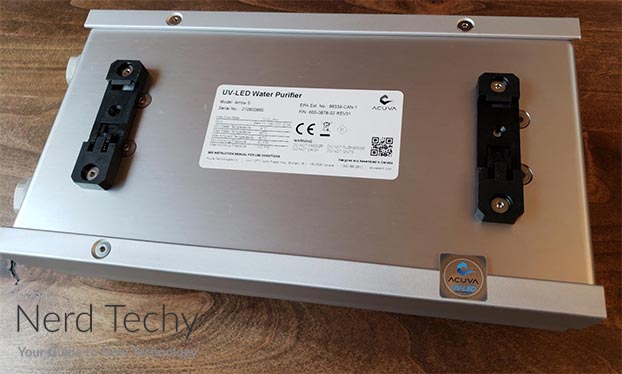 In terms of longevity, the purifier is rated for a life cycle of 10 years, or 900,000 liters. That’s nearly a quarter million gallons of water, which is truly an absurd quantity. With three of these purifiers, you could sanitize an entire Olympic-sized pool. For drinking, cooking, and even washing, you’re looking at more than enough water. Keep in mind that your performance may vary. For example, the vibrations on an RV will tend to wear out any electronics faster than they’d wear in a house. But no matter how you cut it, this is a very long-lasting purifier. 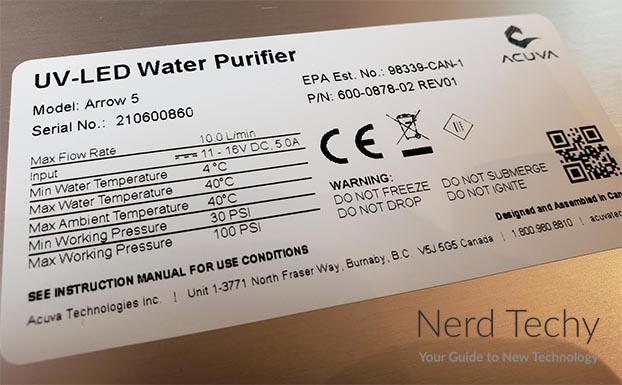 When you turn on the faucet, the purifier light automatically activates. The ring light on the faucet will also illuminate, to let you know the purifier is working. When you shut the faucet off, the purifier will not shut off right away. It will remain lit for five seconds, in order to sanitize any water that’s still moving through the unit. In addition, it will run an automatic cleaning every 12 hours even if it’s not in use. This ensures that any water inside the unit remains free of germs. So if the light on the faucet randomly turns on every now and then, don’t be worried. It’s just the purifier keeping itself clean. 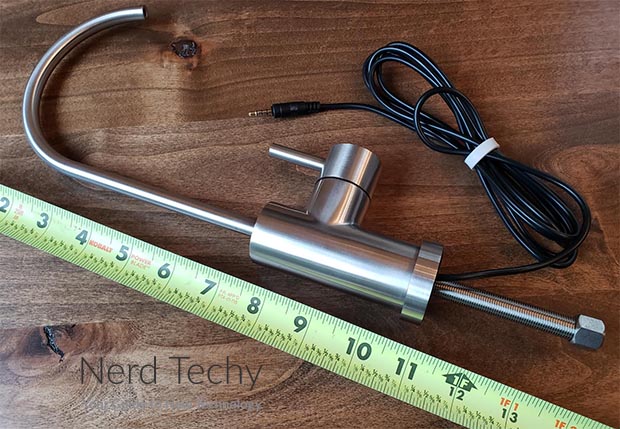 The Acuva Arrow 5 has been lab-tested and proven to remove over 99.99999% of E Coli bacteria. Better yet, it was able to maintain this rate of sanitization even when flowing at its full capacity. So, why would manufacturers want to test E Coli in particular? To begin with, it’s one of the more common bacteria to be found in contaminated water. For another thing, it’s one of the hardest germs to kill with UV light. As a result, the rate of killing E Coli has become the industry standard for measuring UV effectiveness. For what it’s worth, the Arrow 5 has also been proven to kill more than 99% of viruses. 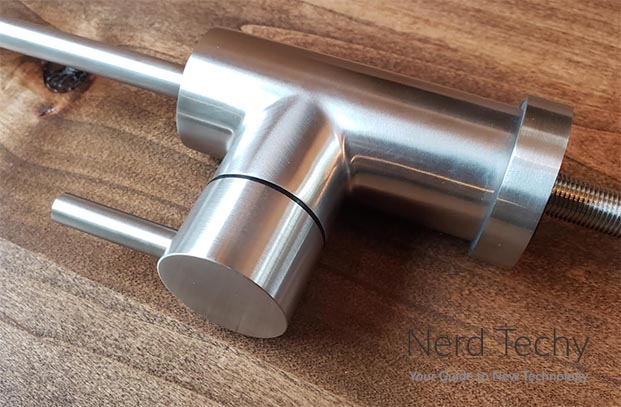 In addition to being very effective, this purifier also doesn’t use a traditional UV bulb. Instead, it utilizes an LED, which is much safer for use with water. Ordinary UV bulbs contain mercury, which can get into your water if the bulb is damaged. By contrast, LED’s are harmless. The last thing you want your purifier to do is decrease your water’s safety, so we’re calling this a win. 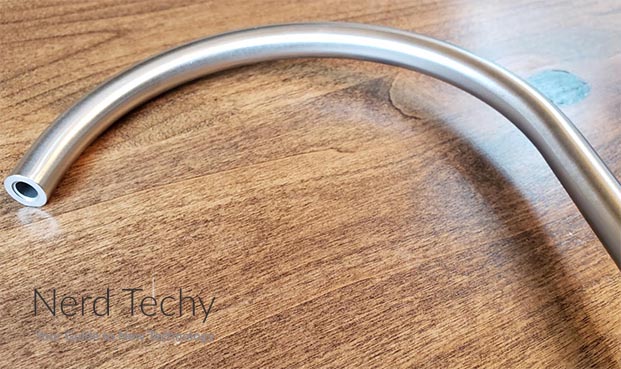 As we mentioned, the kit includes a pre-filter, which removes particulates and chlorine. The standard pre-filter is rated for 1,000 gallons of use, and needs to be changed after that. However, you can also order the optional, advanced pre-filter. This filter lasts for 4,000 gallons, and removes heavy metals and more.

But what if you want to sanitize more than just your water? A portable UV wand can clean solid surfaces and fabric. And you can carry it with you wherever you go. 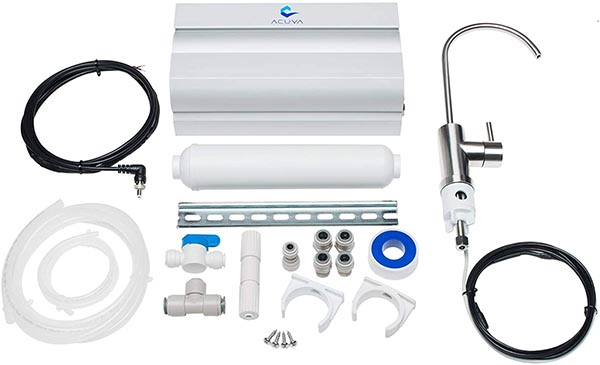 The Acuva Arrow 5 UV-LED Water Purifier is a powerful, in-line purifier that will kill just about anything. It’s easy to install at home or in a boat or RV, and it comes as a complete kit. Not only that, but it has a high flow rate, much faster than most in-line purifiers. There’s a lot to like here, and not a lot to complain about.