Earbuds are made with different kinds of priorities in mind. Sometimes they’re made for people who care about sound quality, and nothing else. Occasionally, they’re made to put comfort ahead of all other concerns. But in all cases, earbuds are making these kinds of tradeoffs. It’s just a matter of finding earbuds that make those trade-offs in a way which makes sense for you.

The Aufo Wireless Earbuds are surprising. For starters, you look at these earbuds, and you see what appears to be a pretty generic pair of buds. They could be mistaken for a thousand other similar pairs, using their humble black chassis, which doesn’t draw the eye. But inside that chassis, the technology behind them is actually rather modern. 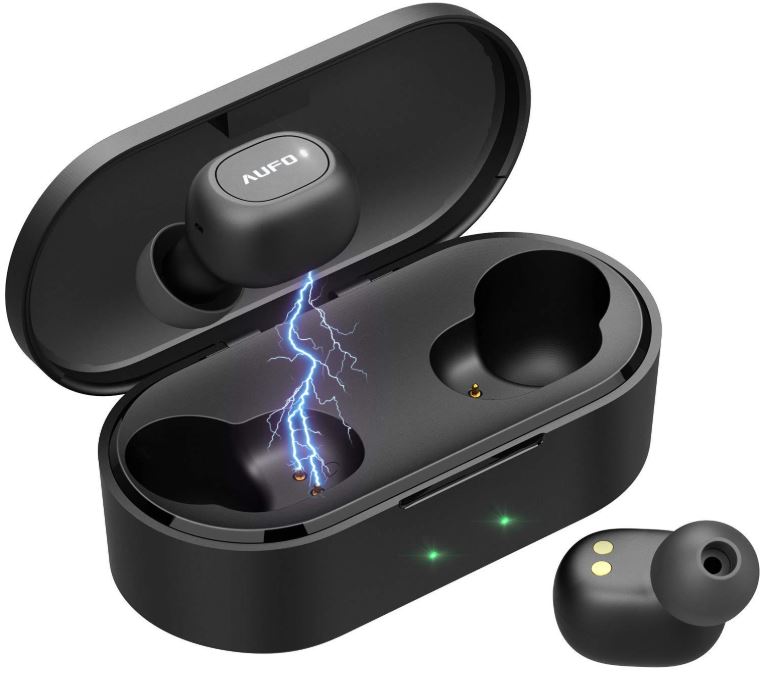 Another big distinguishing factor for the Aufo Wireless Earbuds is their charging case. It’s got one of the larger battery capacities you’ll find among true wireless earbuds like these ones. It’s actually almost three times larger than the case used by a couple of Philips earbuds. That also means the charging case is a little bit bulkier, but provided you’re not looking for some kind of ultralight setup, it’s not so bulky as to bother you.

At the end of the day, what really matters are your own priorities. For people who are going to put battery life ahead of other factors, these earbuds are probably going to end up looking pretty good. Though the Aufo Wireless Earbuds do have their high points and low points.

When it comes to style, earbuds usually go one of two routes. The first route is to make earbuds which have some kind of distinctive style. These are usually made with bright colors, like red. The second route is to make the earbuds look as common as possible. That means some kind of matte black chassis, that’s muted and indistinct. And again, the second route is where Aufo Wireless Earbuds have decided to go. 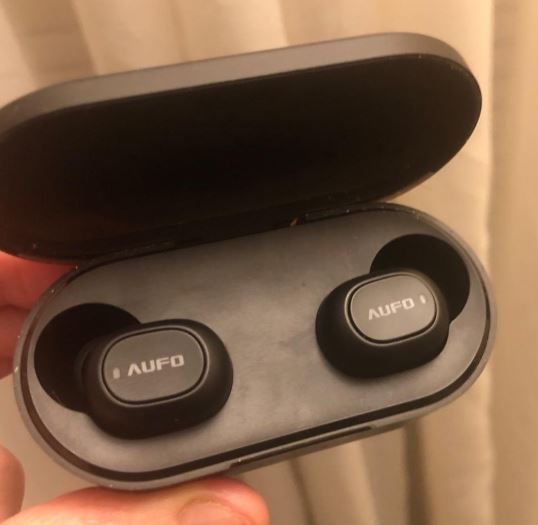 Though they do take a few steps to help distinguish their design, those steps aren’t something you’d notice at first glance. For instance, the case has some slips of black rubber along the side. That gripping can help you get a better hold of the unit while your hands are wet. That’s far better than the slippery plastic cases you so often see.

Speaking of moisture, the IPX7 waterproof protection makes these some very thoroughly protected earbuds. You could confidently wash them off in the sink, or wear them into a shower. Though you’d want to second guess taking them into a more aquatic environment, and certainly wouldn’t want them underwater for more than a couple of seconds.

Aufo Wireless Earbuds include a standard set of three ear tips. That includes a medium, large, and small size. They also include a second set of replacement tips for the future. Though even if you’re using these tips quite often, they do tend to last for an enormous amount of time. You could probably squeeze two years out of a single pair of ear-tips without much worry. 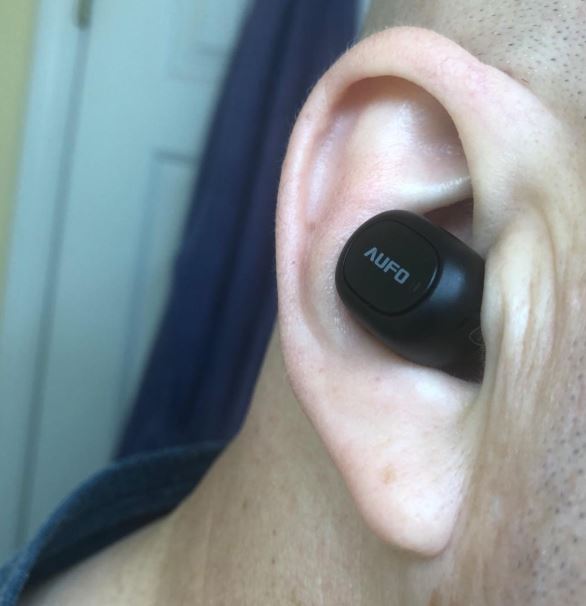 They’re designed to sit comfortably in your ear. Though they’re using standard, generic parts, that is a good thing and a bad thing. It’s a good thing because these generic parts are generic for a reason – they work. And when something is already working decently, why fix it?

The second thing that is good about using these generic tips is cost – they play no small part in helping to make these earbuds a little cheaper than they otherwise would be. Unfortunately, there are no adjustable sizes when it comes to ear-fins. But admittedly, that’s a more obscure feature. And it’s something that matters more for people who are principally interested in active, athletic activities.

Running Bluetooth 5, you can anticipate around 30 feet of wireless connection distance with this kit. Since most people are probably going to end up connecting these earbuds with their smartphone, that should provide more than enough distance for most people. It’s also more than enough for people who are thinking about making the occasional connection with a TV or similar stationary audio device. 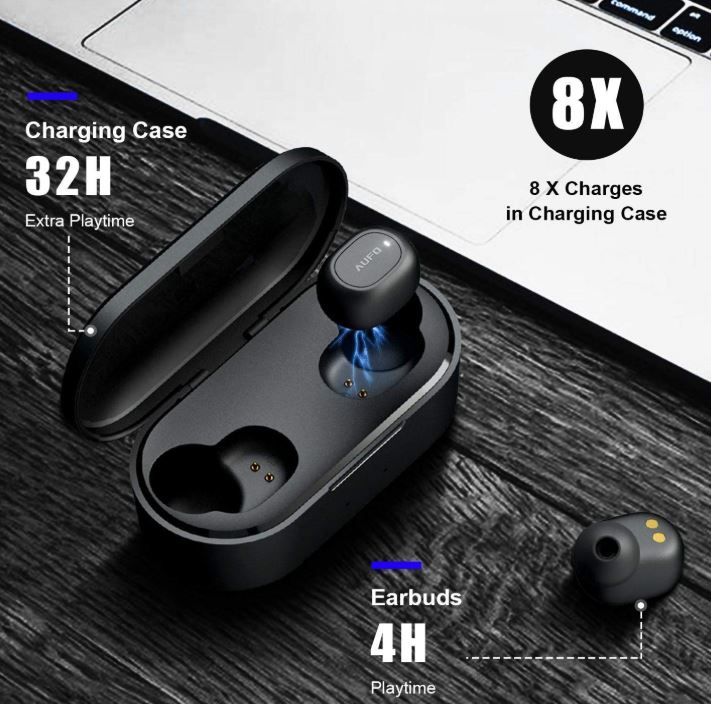 There’s a one-step pairing process. You don’t need to trigger a Bluetooth button or otherwise get involved. After an initial setup of the earbuds, you pretty much just take them out of the case and can start using them. That also allows the earbuds to automatically shut off when you shove them inside the case for charging.

If you need to get a greater connection distance, you usually end up paying for it, in one way or another. You might literally be paying more, or you might be paying more with respect to battery outcomes.

According to official estimates, you’re able to draw about 4 hours from one charge. Though the actual times you get will depend on your own circumstantial factors. When it’s freezing outside, the battery inside your earbuds and charging case are going to suffer. When it’s scorching hot, your battery performance is going to suffer. But provided you’re not in the Arctic, or in the middle of the desert, you can anticipate getting about 4-hours. 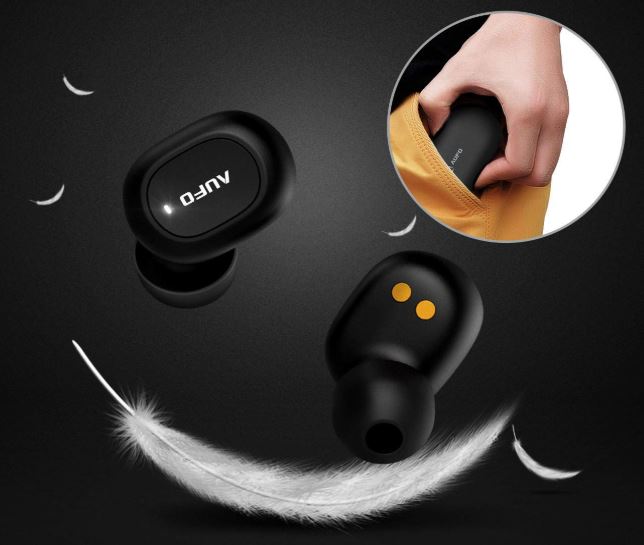 Cranking your volume all the way up is something that can squeeze down those battery expectations towards the 3-hour mark. Though that’s still just a sliver ahead of a lot of similar earbuds, many of which approach as little as 2-hrs of playtime after you start looking at high volume usage situations. And that’s still pretty decent.

It does take the better part of two hours to fully restore the buds, and recharging the empty case can take an afternoon. That’s something which is to be expected of any pair of earbuds which doesn’t use some kind of quick recharging features.

Wireless earbuds have to go over a number of hurtles. One of those hurtles is that earbuds are small. Smaller drivers have a tougher time producing certain tones, have a tougher time sounding loud with clarity, and so forth. They also have smaller batteries to draw from, meaning less power from which to craft their sound. And overcoming those hurtles is the task of basically any good pair of wireless earbuds. 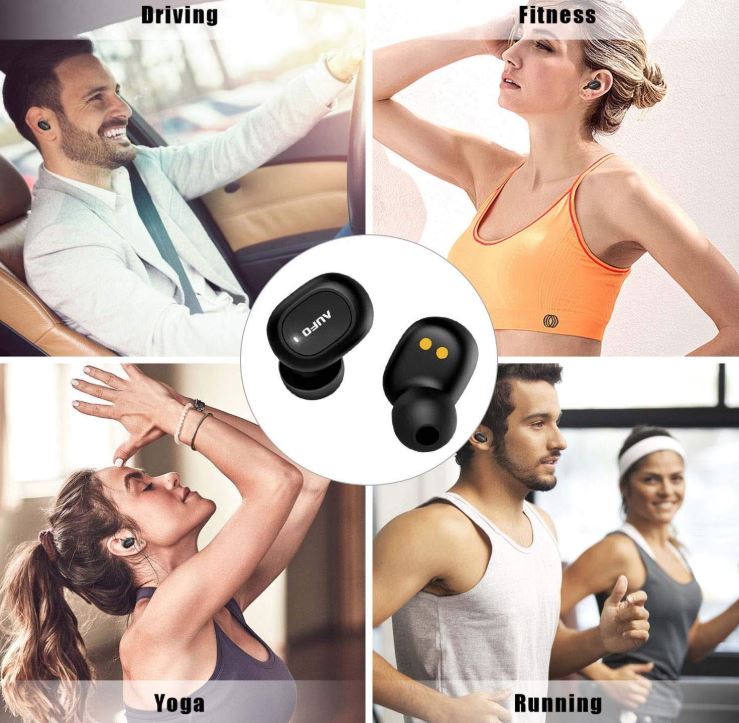 The Aufo Wireless Earbuds have gone about that by trying to make their earbuds have a balanced sound. Another thing that really helps earbuds sound their best is when you can get the right levels of protection from ambient noise. In this case, you do get a decent amount of protection from noise through the standard silicone ear tips. Though they’re ultimately going to perform not much better than other silicone tips in respect to their ability to block noise.

Aufo hasn’t actually included any extra noise cancelling technologies, like active noise cancellation. Nor have they gone out of their way to make passive cancellation a little stronger with memory foam ear-tips. So it’s clear that these earbuds are fairly middle of the road when it comes to noise isolation.

When it comes to the bass tones, which are the most plague portion of the tonal range for earbuds, you’ll find performance that’s just a bit above average. Earbuds like these are never going to deliver sensational bass. Even the pairs that go out of their way to make things a little better can really only put Band-Aids over the larger problem. You can’t make stellar bass tones when you’re working with small 6mm audio drivers, and you’re manipulating small quantities of air within the ear canal.

It’s really only when you start pushing out towards over-ear headphones that bass tones can really come into their own. Nevertheless, the Aufo Wireless Earbuds do manage to make their bass have its own sense of personality. It’s got energy and well defined edges, helping make your music sound a lot truer to life. And they manage to do that without artificially inflating the tones to the point where anything sounds unusual or obnoxious.

There’s a hands free call feature that provides the basics for call support. But calling doesn’t seem to be a priority for the Aufo Earbuds, in general. Your music will automatically start/stop when you send/receive calls, but that’s pretty much it. You can’t find native smart-assistant controls or anything like that.

These earbuds include three sizes of ear-tips, a user guide, a charging cable, and the charging case. Basically, all of the things that you will need to get started listening. As is always the case, you’re going to want to fully charge the earbuds and the charging case before using them. That helps maintain battery performance in the long run. 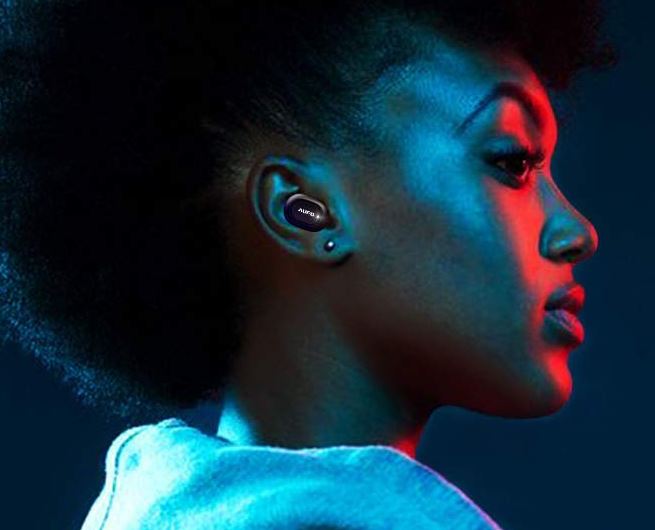 Who Should Choose Aufo Wireless Earbuds?

If you’re someone who likes to enjoy their music at volumes that might be unhealthy, then you’ll probably be impressed by what the Aufo Wireless Earbuds can do for you. They’re loud if nothing else. They’re also reasonably portable. Of course, anything can be made somewhat small. But great portability is about getting lots of details right. Details like the grip pads along the side of the charging case.

It’s small things like that which make the Aufo earbuds a great choice for someone who’s off the grid for an extended period of time. That greatness is also reflected in the battery lifespan. Most people who aren’t going out on some kind of camping trip are going to be satisfied with a battery that’s as small as 12-hours. But if you’re in a position where you don’t want to be recharging your headphones on a somewhat regular basis, then the Aufo Wireless Earbuds will work quite well.