Bang & Olufsen is one of the most iconic brands in audio. Based out of Denmark, they’ve been cranking out premium audio gear ever since the 20s. When they first went to market, B&O was known for producing equipment that had a better sound than anything else on the market. Over time, their brand grew and evolved into something that has the same luxurious overtones as an LV handbag.

Today, it’s the design that stands out the most about B&O. Just as Apple is known for incredible material design, B&O takes this to a whole separate level. Many of their top-tier products are best described as a work of art. In most cases, this is reflected in the price. With some of their offerings priced higher than an economy car, B&O products are often something that only the wealthy can afford.

With their Play line, B&O is going back to their roots. The play line is an ‘affordable’ line of audio gear directed towards the average consumer. We put the emphasis on affordable because, at first glance, it will actually appear to be quite expensive. But once you understand the engineering that goes into each device, you’ll see that their price is comparatively good value.

The key selling point is this: Beoplay speakers sound good. Really good. Most of their hardware falls strictly into the Audiophile category. Even though this is the primary focus, you still get some of that incredible industrial design that B&O is known for.

We’ve already reviewed several Beoplay devices and found nothing but good things to say. In this review, we’ll be taking a look at the E8 – an exciting new pair of earbuds that is designed to compete with other true-wireless Bluetooth earbuds. B&O claims that these tiny earbuds pack the same high quality sound you’ll find in their full-size headphones. Can they live up to the hype? Can they live up to their price tag? To answer these questions, we had to try them out for ourselves. 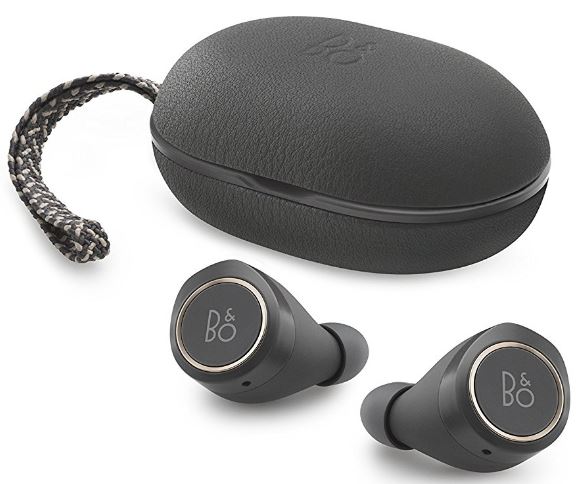 Wireless technology used to be about convenience. Wireless routers were more convenient than wired networking, but they didn’t perform as well. Wireless headphones were easier to use than wired models, but they didn’t sound as good. Both of those facts are no longer true, but the True-wireless earbuds were an exception.

Standard Bluetooth earbuds have a single cable that connects one earbud to another. True wireless earbuds are technically two independent pieces of hardware. The Beoplay E8 is B&O’s first pair of true wireless earbuds, and they’re almost too small to believe. They look like a pair of high end earplugs, and appear almost as if they disappear into your ear canal. They have an extremely attractive enclosure, and put out some pretty good sound. But the main issues that plague True-wireless earbuds is poor battery life and disappointing sound quality. For these to get our seal of approval, they’ll have to excel in both categories. 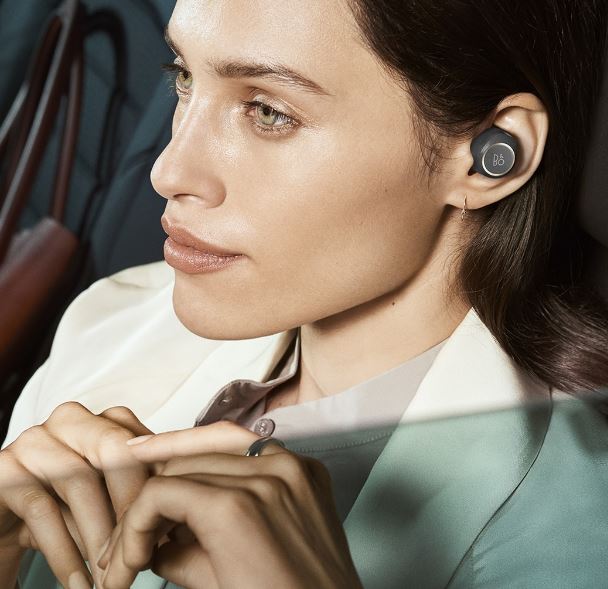 Each E8 earbud is incredibly compact, roughly the same size of your thumb. There are two main components. The tip is located in the bottom corner, and juts off to the side. These earbuds aren’t identical, but are rather mirror images of eachother. This is because the soft tip is ergonomically directed straight into your ear canal, giving you a better seal. To help you differenciate, each earbud is labelled with an L or an R for Left, or right respectively.

One of the nice things about this design is that the earbuds sit flush against your ear. They’ve got a large, somewhat oblong shape that is ergonomically designed to move around the internal cartilage of your ear. 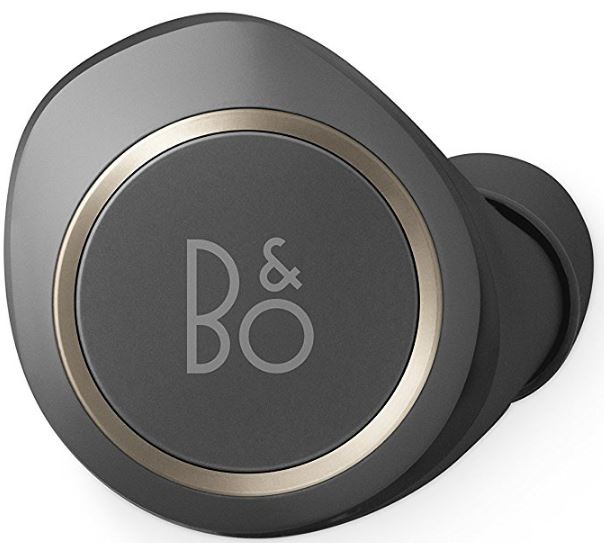 While the inside of the earbud is simple black plastic, the rear is covered with eye candy. This is the part that you’ll be able to see on the side of your ear, so that’s where looks could the most. The end cap is perfectly circular with an intended B&O logo. The metal rim has a very precisely engineered look to it, which creates a unique duality. On one hand, they are fairly professional looking and unassuming. But once you take a closer look, they have a very premium feel to them.

Creating a pair of high end Bluetooth earbuds is never easy. Some of the most eye-catching designs are very in-your-face, which many consumers consider to be gaudy. But there is nothing tacky about the E8’s, and the design is strictly timeless just like most of the products B&O creates.

Like most true-wireless earbuds, the E8’s come in a handy charging case. You’ll notice that there are two metal pins on the inside of the earbud. When you place them inside the case, these pins make contact with a battery and charge the earbuds. 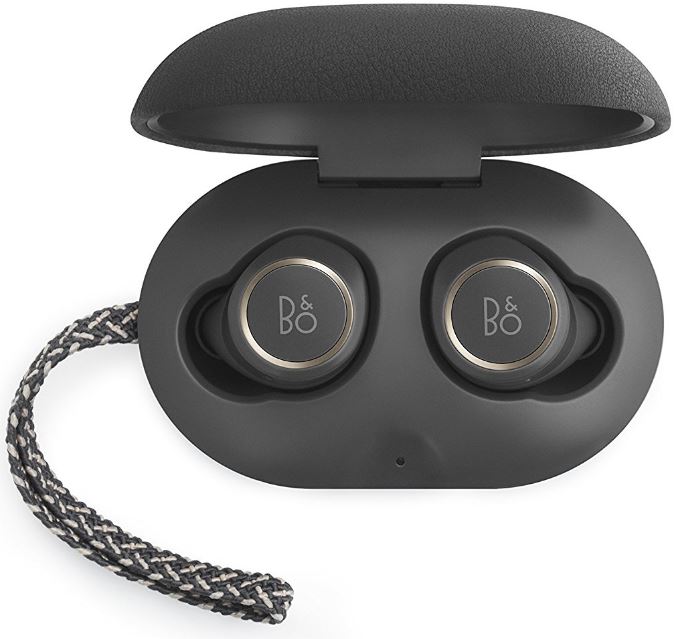 This design allows B&O to overcome a very common problem. Because each earbud is separate, every component needs to be doubled. You need two receivers, and two batteries. Given the incredibly small size of the batteries, you don’t get a whole lot of life out of them. Each earbud can provide you with four to five hours of uninterrupted music playback. Our tests found that this measurement was accurate, and in one case we even hit 8 hours on a lower volume. However, you’re not going to have to run and grab your charging cable after each 8 hour session. The charging case itself has a battery inside, which allows you to juice up the earbuds while you’re on the go.

The battery case effectively doubles your usable life. You can have two five hour sessions before you’ll have to run back and grab the charger. Additionally, the charging case has a very impressive material design. It’s smooth to the touch, and the earbuds clip in magnetically. This adds to the premium experience, and is significantly better than any other charging case we’ve used. 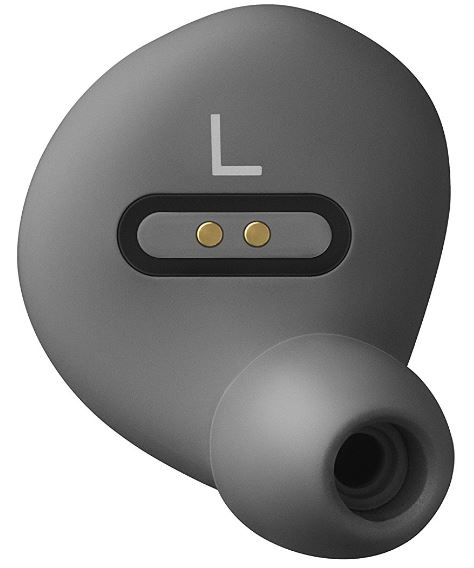 Since there are no visible buttons on the E8’s, it doesn’t appear that there are any controls. This wouldn’t be unexpected with a True-wireless earbud, as many models simply rely on your audio source to control the volume and tracks. In reality, B&O has a very discreet an unique control scheme that we found to be incredibly intuitive.

This control scheme is one of the best systems we’ve used on a compact earbud. You’ll figure it out almost immediately, and won’t spend any time trying to fumble around with a tiny and awkward inline remote. 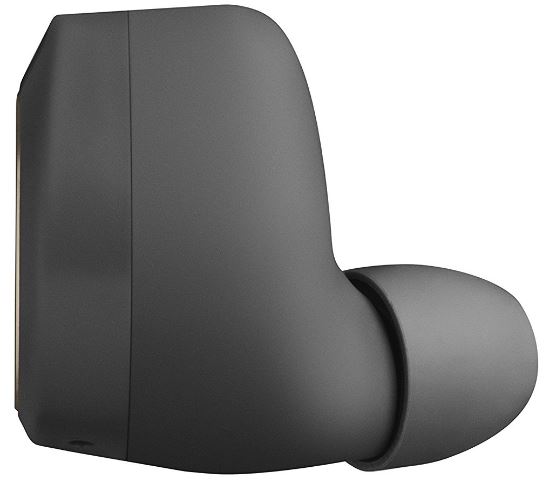 With so much hype surrounding the B&O Brand, we couldn’t wait to hear how they sounded. At this level, it’s no longer about being ‘good’ or ‘bad’. High end audio devices have a unique sound signature. Just like a tuned guitar, the manufacturers create a style of sound that is uniquely their own. You can find this in midrange earbuds as well as high end models. Consider beats audio. Everyone knows that brand is synonymous with explosive bass, and it’s one of the main selling points of those headphones. But B&Os sound signature is much more refined. They’re known for offering a refined balance, but it’s not quite studio grade. Instead, B&O adds a bit of color to their sound, giving it a slightly warm overtone.

The E8’s are a little different. The precision was definitely there. Listening to them is like hearing a story from somebody with an immense vocabulary. You start to hear simple, but subtle elements of your music that you wouldn’t normally find. The sound of fingers sliding along a fret board, or the delicate after-strike or a tom drum. This is what’s referred to in the audio community as articulacy. The drivers are so accurate, that even the most subtle elements of music are brought to life. 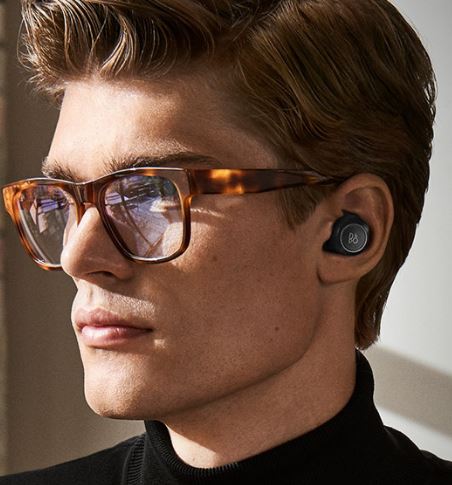 What was different about the E8’s is the bass. The lower end frequencies are heavily pronounced, adding to the warmth of the earbuds. It’s both explosive and powerful, but cautious and defined. With an aggressive electronic song, you get the powerful slams of digital bass. With acoustic music, the bass guitar has a smooth but cohesive feel along with the rest of the frequencies. These aren’t going to be the only earbuds you hear being described as “bass heavy.” But very few earbuds can do so with the same level of precision and detail that you’ll find here.

The unfortunate reality is that many true-wireless earbuds sacrifice comfort for portability. This is because there are a few simple realities that just can’t be avoided. True wireless earbuds are heavy, and they are compact. This means that there isn’t much for the earbuds to use to anchor themselves to your ear. B&O’s unique solution was to have a small plastic hook that slips inside your inner ear cartilage. Surprisingly, you don’t feel it much at all. But what it does do is provide a counterweight to offset the heft of the earbuds. They sit comfortably in your ear without putting any pressure on your ear canal. Without a doubt, they are one of the most comfortable pairs of earbuds we’ve had the pleasure of using.

The main drawback for most consumers is going to be the price. B&O has many Play series headphones, some of which are more affordable than the E8’s. But the reality is that you’re paying a premium for the compact size and ease of use. If you’re on a tight budget, you’ll want to stay away from B&O. These are premium headphones, but a low price isn’t one of their selling points. 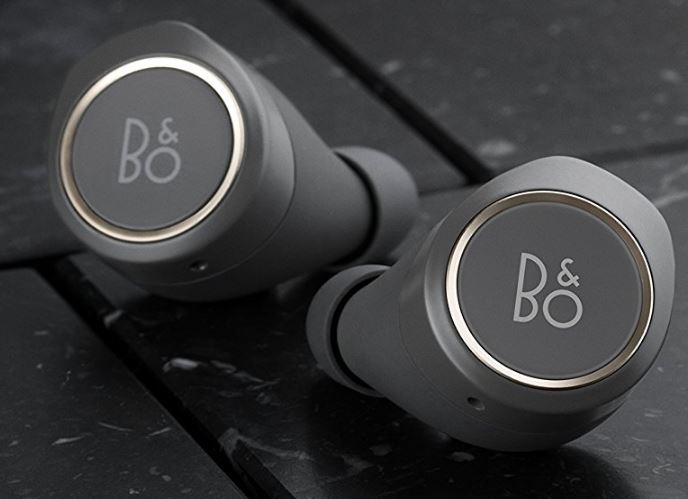 There are plenty of true-wireless earbuds on the market, and many options are extremely affordable. But this market has been dominated by low-cost imports where value was the main priority. While these earbuds are getting better, consumers are typically making significant compromises. Fortunately, B&O has come up with a solution for consumers who aren’t willing to compromise.

The Beoplay E8 Earbuds sound just as good as larger earbuds. They’re extremely stylish, and they have excellent battery life for the form factor. We’d recommend them to anyone who truly loves music. If you already own a high end set of headphones, you know first hand how hard it is to go back to low-end models after hearing what your music is really meant to sound like. But B&O earbuds are a different story. The sound isn’t just better, it’s different. You’ll hear your favorite songs through the colored lens that creates a unique sonic environment that audiophiles all over the world are fanatic over. If you’re looking for a convenient way to learn why B&O is such a popular company, the E8’s are a great way to do it.