Mesh networking is an increasingly popular trend in the home networking industry. As networking has moved away from the 2.4 GHz standard and started relying on the superior bandwidth offered over 5 GHz, the one downside was that range is reduced. To make wireless networking continue to be reliable in larger homes, many consumers are choosing to use mesh networking equipment.

Netgear’s Orbi is one of the most popular Mesh networking systems on the market, but like many competing models it’s been designed with the needs of home users in mind. Because businesses tend to occupy offices that have a lot more space than the average home. In these situations, having large-scale, consistent networking coverage is more important than ever.

The Orbi Pro is very similar in design to the standard Orbi. Both the internal specifications as well as the communication protocols. Where it differs is the software. This router is designed for small businesses that don’t have a full time computer technician. It is designed to be administered by anyone, even without a lot of experience with technology. Does this networking system perform just as well as a professional option? To find out, we decided to try it out for ourselves. 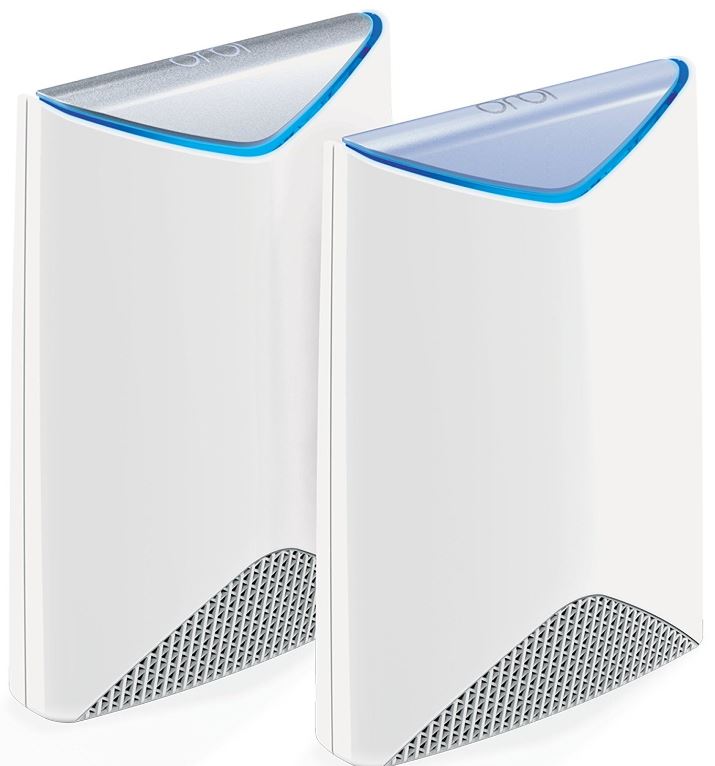 Mesh networking hardware operates by distributing the task performed by a router across multiple separate nodes. Instead of your connection decreasing in signal strength the further you get from the main router, you can positon a number of these units around your office for complete coverage.

In our review, we’ll be testing the 2-pack Orbi system which is designed to cover up to 5000 square feet. You can also purchase a 3-pack which covers 7500 square feet. If you need additional coverage, you can always purchase a satellite add-on which adds 2500 square feet of coverage to any existing system you have up and running.

While these Orbi’s are very similar internally to the consumer hardware, they do come with an all new design that is both modern and professional looking. The Orbi Pro is rated to have up to 40 devices connected at once, which is a significant improvement over the original. Additionally, Orbi has added a ton of great software features that are especially useful in a corporate environment. To see how this model differs from the consumer alternative, we’ll be going in-depth. 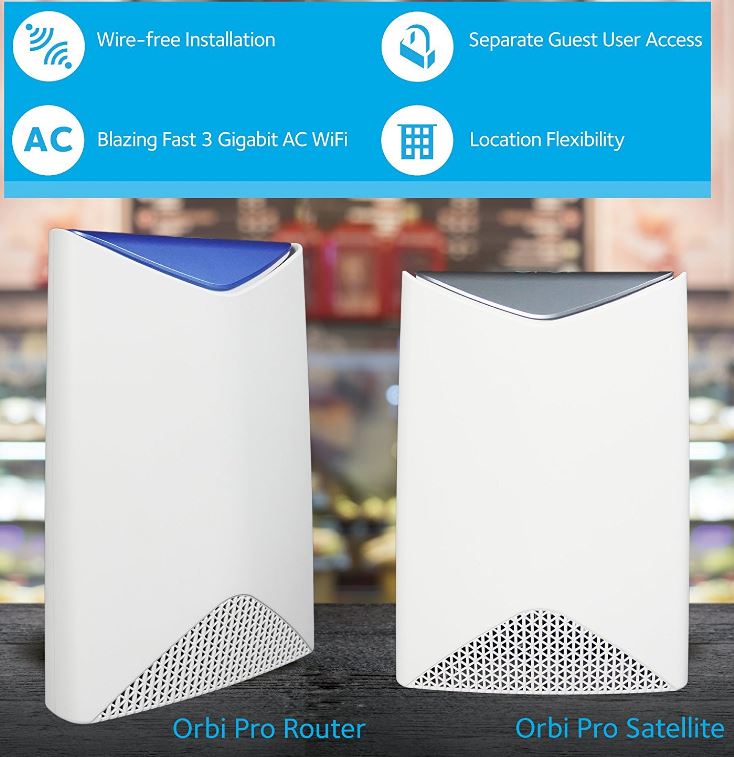 One of the most obvious differences between this Orbi and the consumer model is the appearance. The Orbi pro has a very sleek and professional look to it, featuring a smooth white exterior with blue caps. This design strikes a good balance between a ‘high-tech’ look as well as keeping things professional. But this design isn’t all about looks. It’s also for function.

Home users don’t have to worry about tall buildings all that much. The router is designed to broadcast outwards, but anything above four stories could result in limited range. The Orbi pro is different. You can sit it flat on a table, or on a roof. When it’s laying horizontally, you’ll get more width and less height. This is great for businesses that only occupy a few floors. But if you’ve got offices on different floors, a good alternative is to mount them on the wall. When vertical, the signal goes up more than it goes sideways. A good system with vertical mounting is to place them on the walls on either side of your offices, so the signal will travel better towards upper and lower floors.

The routers have an excellent cooling system on the bottom consisting of a mesh vent and a small silent fan. While they don’t make much noise, they are able to effectively reduce the temperature in high usage conditions. Finally, you’ll find four Ethernet ports on the back. These ports are designed to act as bridges. Any devices that don’t have WiFi connectivity, or devices that have an older, slower standard, can use these ports as a wired connection. 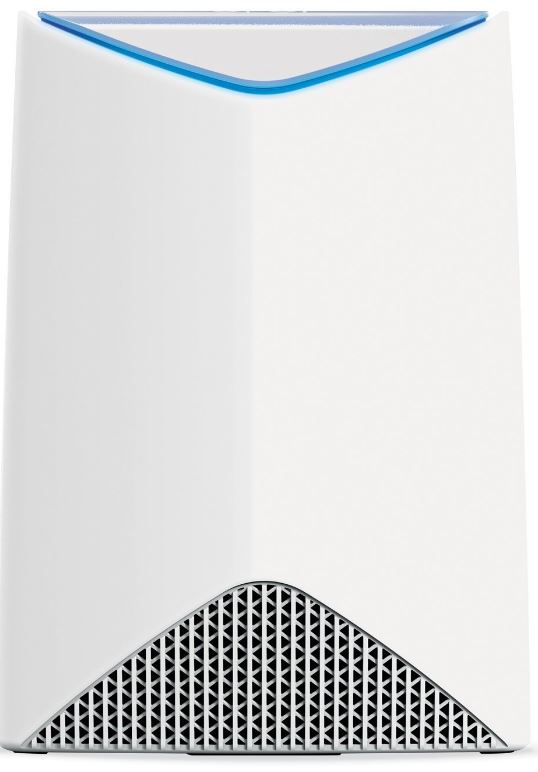 There are many extenders and repeaters on the market that appear to operate in a similar manner to mesh networking equipment, but the internal components are actually quite different. The marker of a true mesh device is something called a backhaul channel. This means that there is a separate method of wireless communication reserved specifically for communication between modules. You’ve still got the 2.4 and 5 GHz frequencies used for consumer facing 802.11ac, but there is a channel that is entirely separate. The advantage of this system is that the frequencies used for backhaul are generally free of interference, so there is no bottlenecking that occurs when channels are overloaded with data.

Systems that use the client facing frequencies for backhaul effectively half your total bandwidth. If you had an AC4000 router, it would need to reserve 2000 Megabits to transmit data from node to node, leaving only 2000 Mbits available for consumer communication.

Since this router is a 4×4 MIMO device, you might think that you’ve got 2 channels for consumer devices and 2 channels for backhaul. But in reality, it’s actually an 8×8 router. You’ve got two 2.4 GHz consumer channels, two 5 GHz consumer channels, and four 5 GHz backhaul channels. Despite it’s true specifications, it’s sold as a 4×4 MIMO device because that is all that you’ll have access to as an end user.

Overall, this design allows you to get the same high performance you’ll find in single point routers while retaining the benefits of a distributed mesh system. This might not be the only system on the market with these specifications, but what makes this model different is the backhaul channel. Orbi advertises only the bandwidth you actually get to use. If you see a router advertised with similar specifications that doesn’t include a dedicated backhaul channel, you’re effectively halving your true bandwidth. 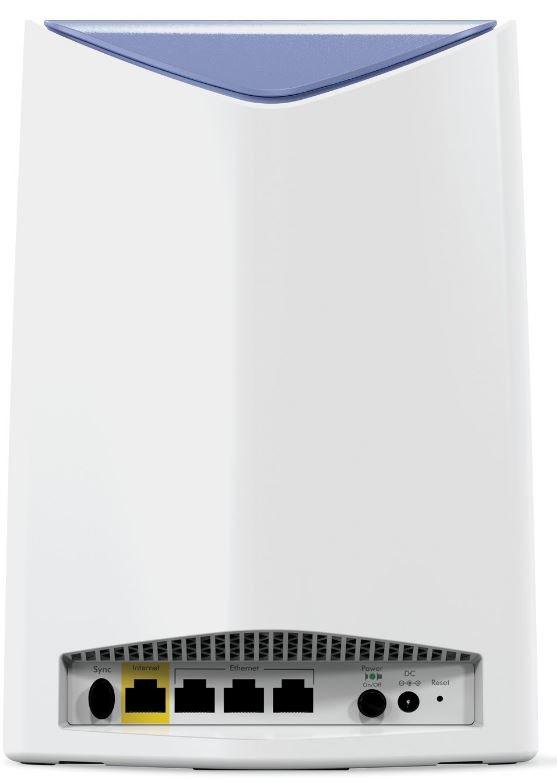 This system is designed so that anyone can set it up, regardless of technical ability. This is done through a simple web interface that takes you step by step through the entire procedure. It walks you through setting up a private company network that is both encrypted and password protected. You can also set up a number of client facing guest networks. These networks do not require a password, but have limitations set on them by you. This platform isn’t quite as advanced as some expensive corporate routers, but the advantage is that anyone can work on them.

Another key advantage is that this router is programmed to be used with your current router, if you wish. The Orbi home router is designed to replace your existing networking platform, and doesn’t have a well-developed method to work concurrently. The advantage of being able to use both is that you won’t risk breaking your existing networking system. Many small and medium sized businesses have paid a technician to set up a specific corporate network, so the Orbi system can simply be an expansion on what you already have.

The web interface has a plethora of usage controls for both internal and public users. You’re able to restrict the websites they view, the amount of bandwidth they use, and also prioritize your private network so that client bandwidth doesn’t take away from your internal systems.

One of the main upgrades in the Orbi Pro is the software’s ability to handle a lot of connections. You can have 40 simultaneous users all with their own allocation of bandwidth, nearly doubling the 20 users supported on the home Orbi. In our tests, we were able to get more than 40 users connected. But when you exceed this rating the load balancing software doesn’t work as well. If you have a slower internet connection, it’s possible that users 41 and up may experience a laggy connection. 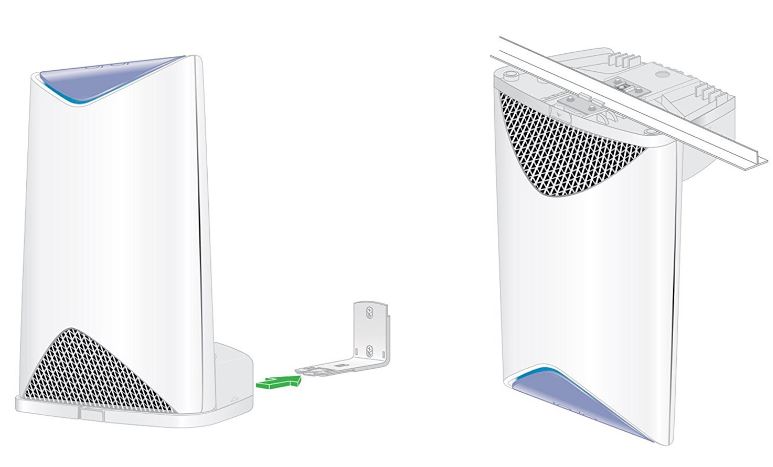 Orbi claims that you can cover over 2500 square feet with just a single Orbi. This means that our two-pack should provide a solid connection across 5000 square feet of space. Our tests found this to be accurate. We set it up in the NerdTechy office which is roughly 4300 square feet across two floors. Everywhere inside the building had a stable connection, and we could still get a signal outdoors.

The one thing we did notice was that placement was very important. You’ll want to make sure you mount it horizontally to cover a large floor, or vertically for taller, skinnier offices. As long as we did this correctly, we got the kind of range we were expecting.

When testing bandwidth, one of the key things we noticed was that bandwidth was pretty consistent regardless of the range. As with any router, there is a reduction in speed as you move far away from the main module. But this drop wasn’t anywhere near as extreme as with many competing products.

The theoretical maximum bandwidth of the backhaul channel is 1.7 Gb/s. On the 5Ghz consumer channel you get 867 Mb/s, as well as 400 Mbps on the 2.4 GHz channel. In our tests, we found that we could get 517 Mbps when close to the router, and 465 Mbps within a 2000 square foot range. The lowest speed was saw was 197 Mbps, which was towards the end of it’s range.

In the real world, it’s unlikely that any single user will get this full speed. Most of the time, you’ll have many users sharing the same bandwidth. Fortunately, even corporate connections are generally slower than this. In our eyes, this router is powerful enough for almost any medium or small business. 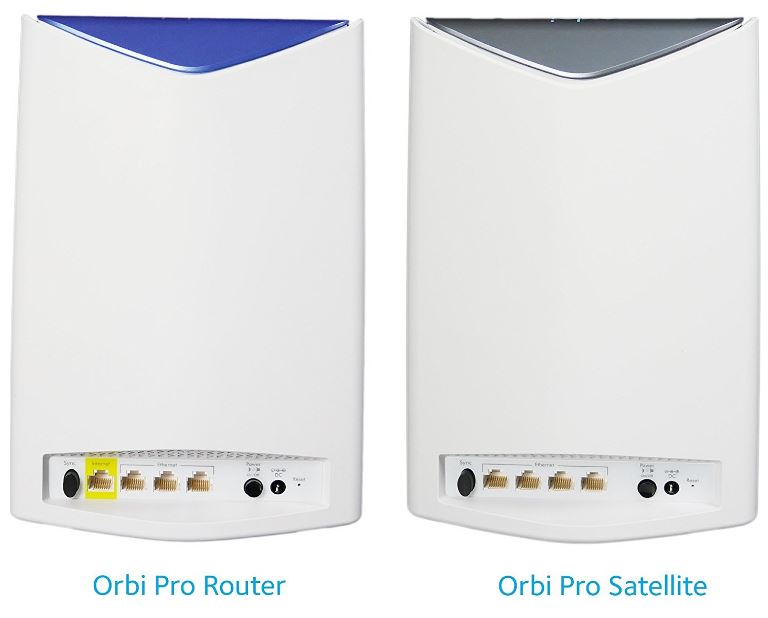 Although the web interface was extremely comprehensive, we found it to be a little sluggish. Experienced users are likely going to want to rip through the settings as they know what they’re looking for. As a techy, we found it a little frustrating to have to go through the entire process step by step. If you’re inexperienced, the added ease of use will make this an asset. But if you know your way around networking equipment, you can expect this model to take longer to set up than competing options.

The Orbi Pro takes everything we loved about the original Orbi, and ads on a whole new layer of features that are specifically designed for small and medium businesses. The most impressive addition is the ability for the router to set up multiple separate networks. You can have an open guest network for your visitors and clients, a semi-private network for employees, and a locked down network for your servers and other important business infrastructure. 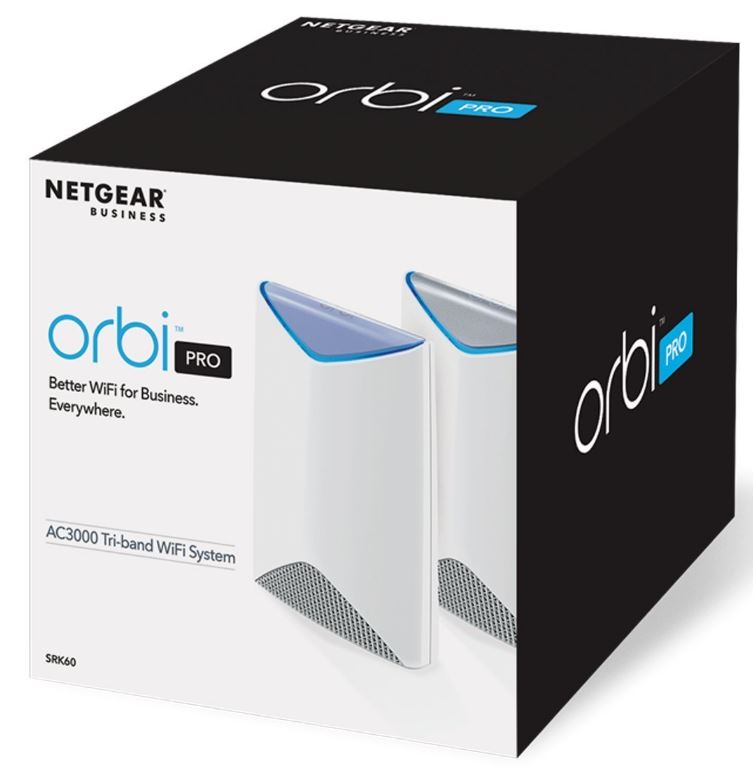 Even though you can set up an extremely complex network, you don’t need to have any special technical skills to get everything up and running. The Orbi Pro is designed to be simple to use and easy to understand. For any business that’s looking to create a professional grade network without having to hire a technician, we highly recommend the Orbi Pro.

If you’re just looking to set up a simple consumer device, we’d recommend that you pass on the pro and get the more affordable Orbi. If you want to see what other options are available from other manufacturers, you’ll find a few of our favorites available in our roundup of the best whole home mesh networking system.