Just ten short years ago, WiFi was nothing more than a luxury. Today, wireless connectivity is so prevalent that the United States has considered classifying it as a utility. The technology has rapidly developed over the years, improving bandwidth, range, and speed. Many technologies have promised to fix the issue of “dead-spots” found throughout the household, but many have come up short. According to Netgear, a company that’s been providing wireless networking solutions for over a decade, the solution will be found in “Mesh Routing” technology.

Mesh technology has been around for quite some time. If you recall the “One Laptop Per Child” initiative founded over 10 years ago, mesh technology promised to bring internet access throughout many rural third world countries. Essentially, mesh works by adding multiple nodes into a network, and allowing communications to be routed more efficiently throughout them.

With the OLPC project, communications would simply hop from laptop to laptop until finally reaching the primary router. Historically, the problem with mesh is that it works a bit like a game of telephone, with several opportunities for the data to become corrupted. Netgear has found a more effective way to implement mesh technology with their brand-new Orbi High-Performance Wi-Fi-System.

Netgear doesn’t refer to Orbi as a router. It calls it a “WiFi-system”. That’s because it’s not just a router, but also an extender and a signal optimization system. The kit includes two pieces, a base and an extender. The router has a blue top, while the extender is white. 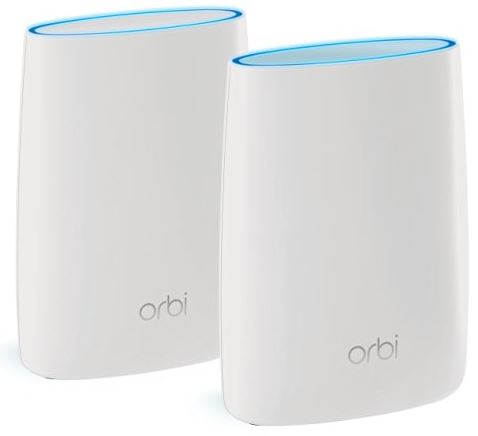 The system supports three bands, both the standard 2.4GHz and 5GHz, plus a dedicated 5GHz channel not usually accessible with the 802.11 standard. On the back, you have three gigabit Ethernet connections and a USB 2.0 port. The system is designed to be easy to set-up, making it one of the most customer friendly range extenders on the market.

Recently, significantly more networking appliances are being released with design in mind. Take for example our recently reviewed Linksys EA9500. The router is sharp, angular and covered with antennas. Many products are sold with this same aggressive design. Orbi has a unique look that is certainly refreshing. The smooth rounded surfaces of the device have a very decorative look to them, almost like a piece of pottery.

It’s two primary competitors, Eero and Luma also feature designs that are pleasing to the eye, but their incredibly compact design restricts the performance of those devices. Orbi, on the other hand, came up with a format that was both easy on the eyes but also large enough to house the powerful networking hardware required for this type of application.

The communication standards used by Orbi are what sets this system apart from competitors. Signal quality issues are most commonly caused by overcrowding of wireless channels. Every router operates in two different sets of bands, 2.4GHz and 5GHz. Each band only has a specific set of channels available, determined by the 802.11 standard. If routers tried to use their own channels to tap into some of that unused airspace, they simply wouldn’t communicate with any devices. 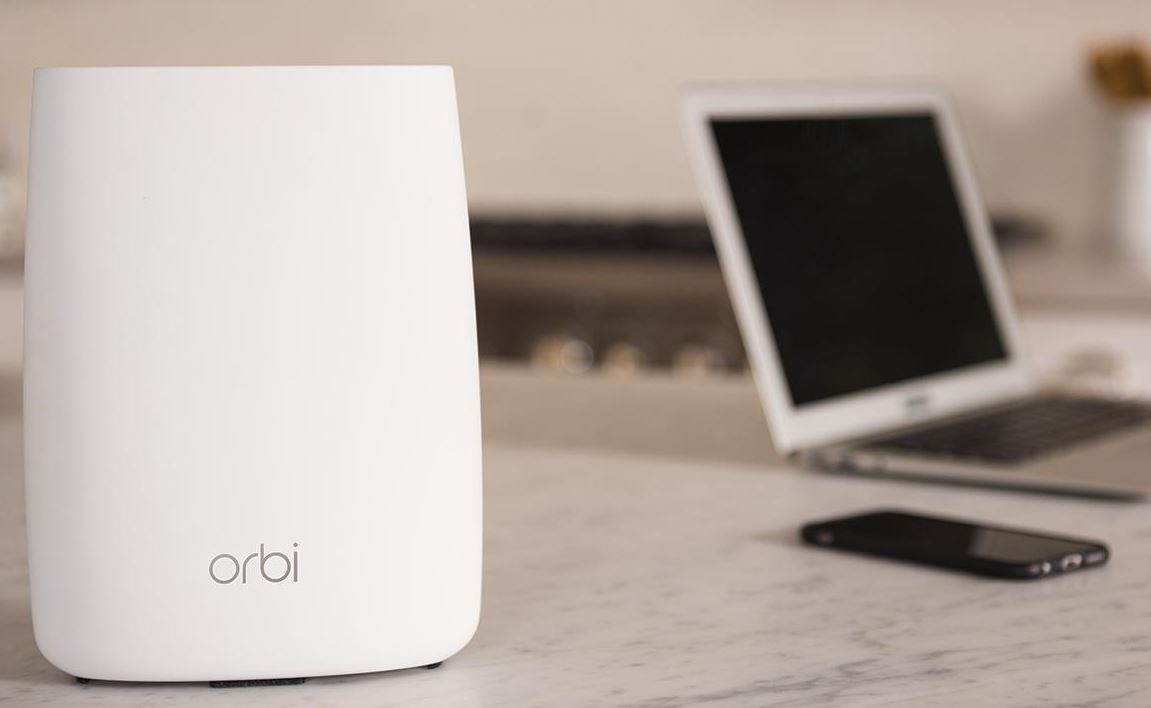 Netgear is able to solve this problem with its 2-part system. The router and the extender have their own dedicated communication channel. The extender is able to access a part of the 5Ghz band not normally used by consumer electronics, and leverages this in order to receive a clear signal back to your primary router. This means that even if you place the extender in a part of your house with no Wi-Fi signal, it should still be able to communicate with the router. The other two bands in its tri-band radio are used to cover the standard wireless spectrum, offering the latest 802.11ac connectivity.

Netgear clearly put some time into designing the set-up procedure for Orbi. First, the user simply connects the router into their existing network with a standard WAN port. Then, the top of the extender is illuminated by LED lighting.

As you walk around your house, the color will change depending on the quality of its connection with the router. A blue ring around the top of the extender lets you know that the connection speed is ideal, while an amber light means that the speed is inhibited. Pink tells you that the extender is too far away from the router. The entire procedure should only take a couple of minutes. Since the system provides over 2000 square feet of coverage, the majority of customers should be able to simply plop the extender down in the center of their house. 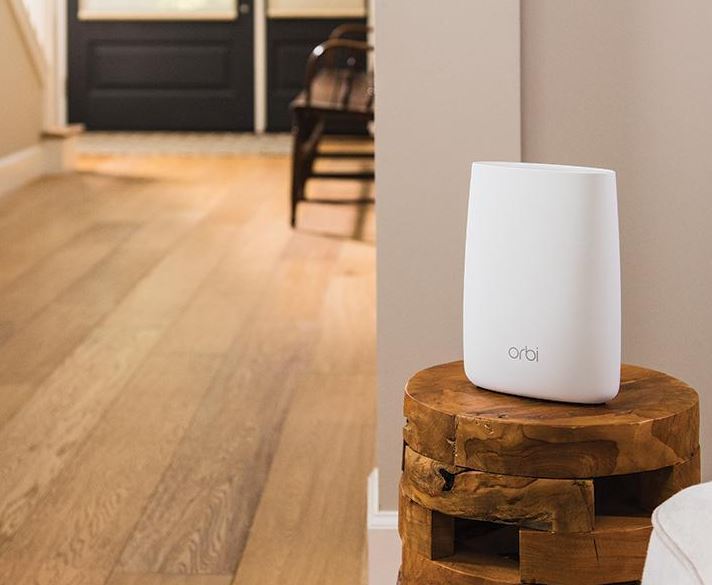 It’s clear that the Orbi platform supports high performance networking, but how does it synergize with your existing home network? Many early extenders simply re-broadcasted the wireless signal from another location. If you’re already experiencing network congestion, this will just compound the problem.

Orbi takes advantage of “Multiple User, Multiple Input, Multiple Output,” (MU-MIMO) technology in order to work with your existing home network. If you have seen the MU-MIMO in use with other routers you know that this means there are multiple separate radios, with each client on your network receiving his own dedicated channel. This system ensures that one users high bandwidth usage doesn’t slow down other users on the network. But Orbi offers something a little more advanced. Their MU-MIMO system doesn’t work with just its own internal antennas, but also your existing home network. Whenever you connect to your wireless network, your device will select either Orbi or your existing router. You won’t have multiple radios all competing for the same signal space. 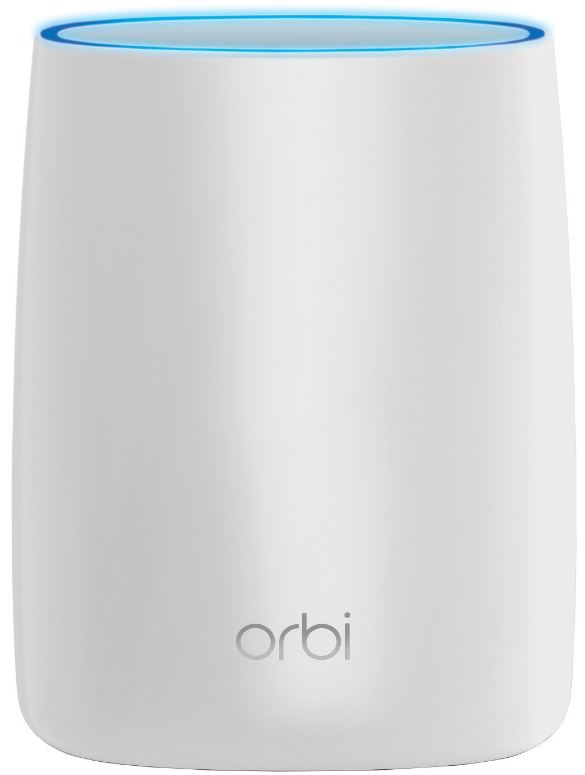 On the extender, Orbi has three gigabit Ethernet ports as well as a USB 2.0. There are still many devices on the market that do not have wireless networking. IPTV receivers are particularly guilty. With Orbi, you can simply plug one of these devices directly into it to create a wireless bridge. Because it’s communication channel in inaccessible from standard wireless radios, this also makes the Ethernet port a great way to secure your connection in critical environments. 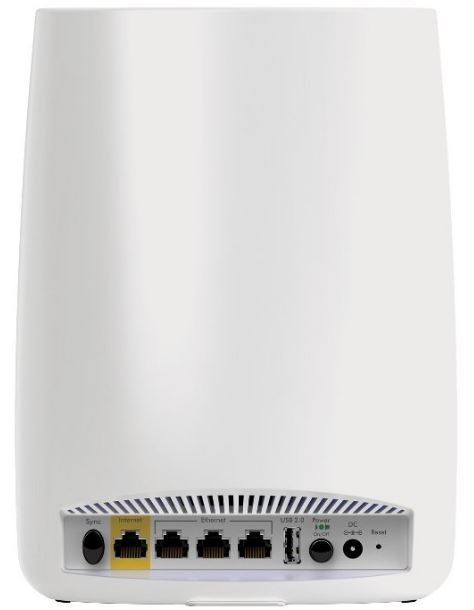 Any traffic that travels from Orbi to its own router will not be susceptible to security breaches. Many netbooks and mobile devices do not have an Ethernet port, requiring you to connect via USB. Unfortunately, Orbi only offers USB 2.0 so it’s unlikely you’ll be able to take advantage of the bandwidth it’s capable of. Then again, it’s rare to see a device that doesn’t have Ethernet or Wi-Fi, so clients will be more likely to use the wireless connection.

The standard Orbi kit allows you to cover over 2000 square feet with just a single extender. A second extender can be purchased, bringing the total to 4000 square feet of coverage. It’s unlikely that home users will require such massive coverage, because these figures only refer to the distance that Orbi itself services. Factoring in the area already covered by your wireless network, the actual span will be 50 to 100% greater than Orbi’s range. 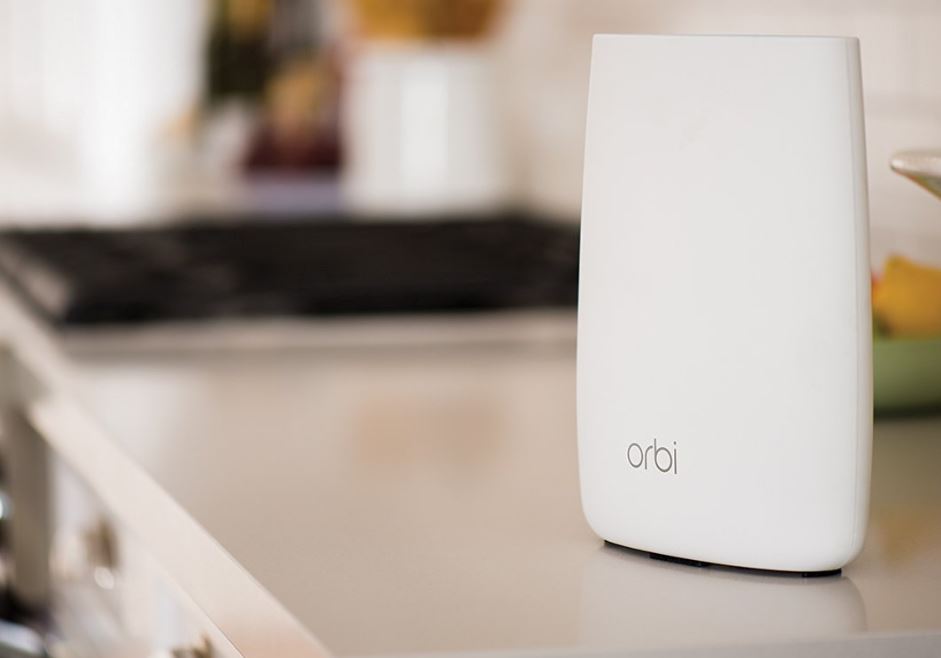 Business intelligence data cited by Netgear claims that the average family home has over 11 wireless devices. As we move everything on to the cloud, are devices are not simply downloading occasional pieces of data. Today, our devices have a constant stream of information travelling back and forth at any time. Many industry professionals have been waiting for some large tech company to invent a new communication protocol that disrupts the entire industry. But with Orbi, that may be unnecessary. This simple wireless system has combined a few modern technologies, added a little bit of engineering and created something that directly addresses the biggest problem facing wireless communication today.

The Orbi High-Performance WiFi System is priced as a premium product, but still offers significantly more value than comparably priced routers. This is because it works in harmony to completely replace your existing network. Orbi can be strategically placed to compensate for the areas that are difficult for your existing router to reach.

So, should you purchase this WiFi system? If signal quality tends to be a big issue for you, we would absolutely recommend Orbi. It may seem like this is simply one of many wireless extenders available on the market, but as of writing there is no system commercially available that even comes close to it. Orbi hasn’t quite hit the market yet, but in just a few short weeks it should be arriving to customers throughout the United States.