Wireless networking has come a long way since it was first released. Early routers offered bandwidth even lower than available broadband internet speeds, and they suffered greatly from interference and poor signal strength. Many users who take advantage of online gaming or use mission-critical connectivity software have turned to wired networks as the only reliable way to get lightning fast ping speeds and reliable throughput.

There are many different wireless communication standards available, each with their own set of benefits and drawbacks regarding bandwidth, range and power. Linksys has been selling wireless networking hardware since the earliest days of the technology, and their EA9500 router is listed as one of the most powerful routers on the market. Leveraging multiple technologies with an advanced quality-of-service management software, does this product live up to the marketing, or is it simply overkill for most users? Let’s take a look. 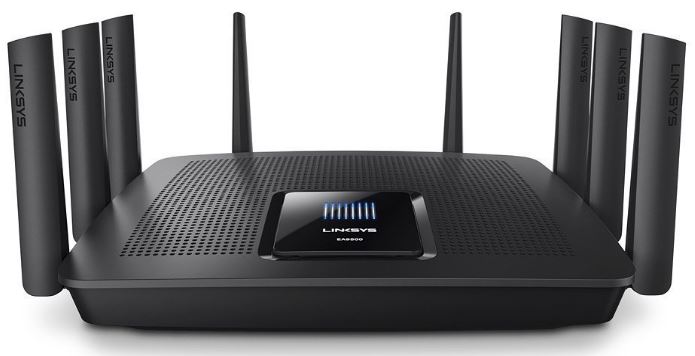 Upon removing the EA9500 from the box, the first thing you notice is the sheer size of the router. Nearly twice as large as competing products, this router definitely looks like a brute. With 8 uni-directional antennas, some have described it as looking a bit like a spider.

On the back of the device is a plethora of different connections. You’ve got the rocker switch that controls power, an indented reset button, 8 separate gigabit Ethernet connections, a clearly labelled WAN port and two USB ports. One of them is blue, indicating that it runs on the new USB 3.0 standard, while the other is a standard white USB 2.0 port.

The EA9500 is the first to be released of the second generation of tri-band routers. Based on a chipset made by Broadcom, the 4×4 MU-MIMO. The awkward naming convention of this chipset is actually an acronym describing the function of this technology. Multiple-User Multiple Input Multiple Output (MU-MIMO) is a technology that takes the limited bandwidth available in a WiFi network and dynamically allocates it based on the client’s individual needs. 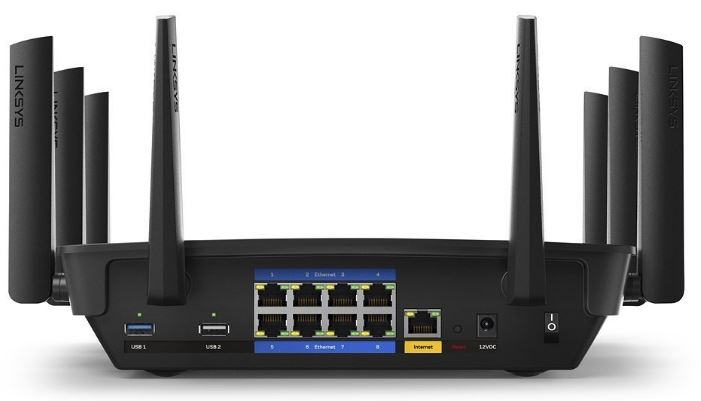 With a single band router, every high-speed connection reduces the speed of the connection other uses can receive. Because this router features multiple bands and multiple channels, no single users can take advantage of the incredible bandwidth this router offers. But even when you have many uses performing high volume data transmissions, every user’s connection will remain responsive and speedy as they essentially are given their own individual channel to connect to.

The total bandwidth offered by the EA9500 is 5,333 megabits. But no single user is going to be able to take advantage of this speed, as it’s divided up between the different channels. Each of the 5 GHz streams can receive 2,166 Mbps each. The 2.4 GHz band tops out at a theoretical max range of 1,000 megabits, although this speed is rarely reached in real-life scenarios due to the range issue of the band. 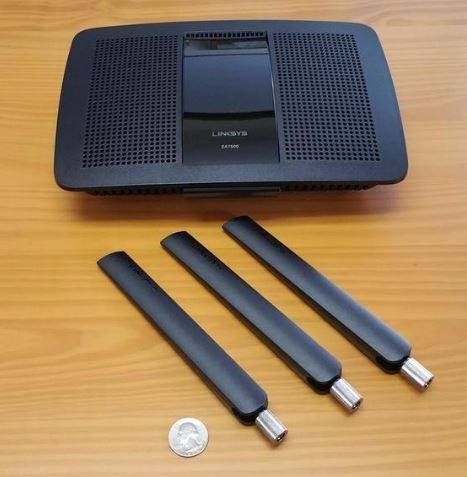 How Frequencies, Channels, and Standards Work

The router is designed to work under all modern WiFi communication standards, including IEEE a/b/g/n/ac. The 802.11b/g/n standards all operate under the standard 2.4 GHz radio frequency, while 802.11a is strictly a 5 GHz standard. 802.11ac is the newest and most powerful standard, capable of switching between 2.4 GHz and 5 GHz as needed. There are many different devices that operate in the 2.4 GHz frequency including cordless phones, microwaves and other consumer electronics.

That means that this frequency can be very crowded, and getting a clean connection in an urban environment is challenging. The 5 GHz frequency is used much less regularly, so you often get a cleaner connection. This frequency is also known for penetrating obstructions more efficiently. Even when going through several walls, bandwidth tends to remain high. Of course not every device supports these new channels, so the inclusion of all previous 802.11 standards means that even older devices can still connect to the EA9500 at their maximum theoretical connection speed. 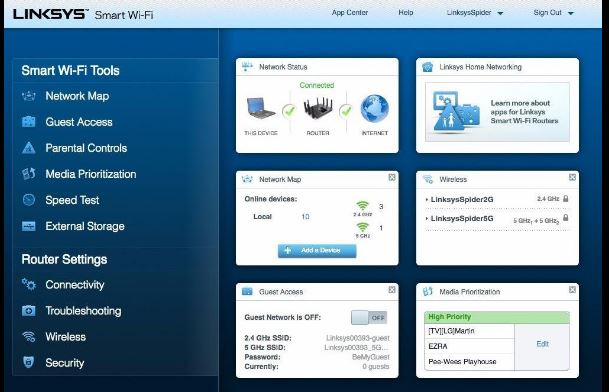 The specific chipset the EA9500 uses is identified as the Broadcom BCM4709, which features a dual core 1.4GHZ CPU. There are two other routers on the market with this chipset, manufactured by Netgear and Asus. All of these routers feature a BMC4366 2.4 GHz wireless radio with quad Skyworks power amplifiers. The 5 GHz radios are also consistent, although taking advantage of different amplifiers, the RFMD 5542. These are actually two independent 5 GHz radios, improving signal isolation between clients and reducing noise.

While all three routers have 128 MB of ROM, the EA9500 has only 256 MB of RAM compared to the 512 MB found in the other routers. While the EA9500 has been slammed in other reviews due to the lower ram, we believe this will make no difference in real-world applications.

RAM is only used for a few things: To store the Mac address table, to perform Network Address Translation, and store connection data for each open thread. Typically, the two things that can slow down a router are high volume traffic on an encrypted VPN (as the router needs to recalculate the checksum for each packet as it resolves the address) and resolving a large number of open connections (bit-torrent is the biggest cause of this).

If you were using this router in a data center on a gigabit fiber optic connection with hundreds of active users, you might need more than 512 MB of RAM. But it is incredibly unlikely that home use would ever result in an environment that couldn’t be handled by the hardware in this router. Including 512 MB of RAM in a consumer product is clearly an example of manufacturers simply trying to make their products look good on paper, and it’s nice to see that Linksys is committed to building a product that actually performs well instead of buying into marketing hype. 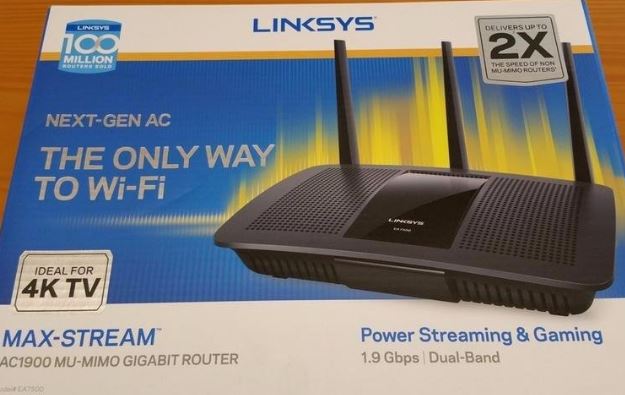 Tired of all the tech-talk? We all know that in the real world, wireless communication devices rarely perform at their maximum theoretical values. You’ll be happy to know that even in our real world tests, the EA9500 performed better than any router we have ever used.

For our close range test, we tried transferring a large file from a server connected to the gigabit LAN port, and transferred it to and 802.11AC device in the same room as the router. We were blown away by the speed, averaging 685 Megabits per second. The speed was not drastically impacted by range either. Going to a room on the opposite side of the building, through multiple walls, we still received a transfer speed of 498 Megabits per second.

The 2.4 GHz frequency is not nearly as capable, but our speeds were still impressive. In the same room, the file transferred at 243 Megabits per second. At long range, we saw 120 Megabit transfer rates.

Ping speeds were impressive, and remained consistently fast no matter how far away from the router we were located. During our testing, we did not see any signal dropouts even when transferring multiple large torrent files with hundreds of connections each. 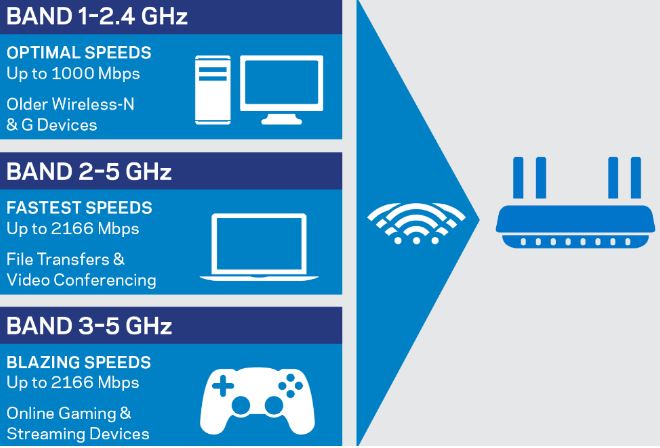 There is no doubt that the Linksys EA9500 AC5400 Router is one of the most powerful routers on the market, but most home uses will not be able to take advantage of the impressive features. For starters, there are not tablets or phones on the market that are capable of these kinds of speeds. Imagine connecting a firehose to your garden sprinkler. Water is only flow at the rate of the slowest part of your connection. If you purchase this router now, your connection will be future-proofed to take advantage of the faster WiFi chipsets that will be released in the future, but the immediate benefit is minimal.

Even if you pair this router with a custom laptop or desktop computer featuring a wireless card that can handle the bandwidth this router is capable of, you still need to factor in the speed of your internet connection. There are a few places in the united states that offer 1000-megabit fiber optic internet connection to consumers, and these are really the only type of connections that require such a powerful router. Even if you are running on a 100-megabit fiber connection, which is still incredibly expensive and rare, you will be able to utilize a fraction of the bandwidth this router is capable of. 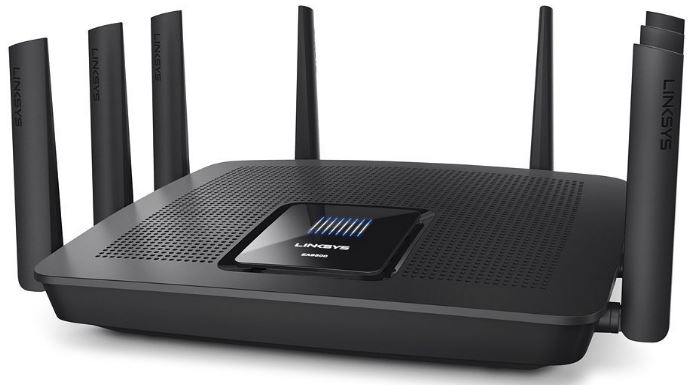 If you’re running a home server with internal storage capable of read speeds upwards of 500 megabits, this router will allow you to have devices accessing your data at full speed. If you have an extremely fast internet connection and want to take full advantage of your purchase, this router is possibly one of the only products that will allow you to do so wirelessly.

Lastly, if you are simply looking for a high end product that will last for many years without becoming obsolete, the Linksys MU-MIMO AC5400 / EA9500 is probably your only choice. But for the majority of home uses, this product is overkill.