Working with an unreliable WiFi Connection doesn’t just push you away from your most comfortable spots in the household where you can fully immerse yourself and do your work – it can cause all sorts of headaches. As more and more homes are starting to become “smart”, even your average appliance/device is in need of a stable internet connection in order to function properly, thus securing access to an all-around high speed internet connection is a priority.

The most important thing with WiFi connections is their ability to provide excellent speeds to multiple devices simultaneously. If you’re trying to secure access for all your devices, you’re going to need something that resembles a small company type of network, and not simply a router with a single repeater located twenty feet away. The best way to go about it is by utilizing multiple access points so not an inch gets left uncovered and the signals don’t get in each other’s way.

The downside thus far was that these things were either too expensive or too complicated for the average person to get a grasp of, meaning that it took a while before companies began simplifying the process and at the same time making it more affordable. 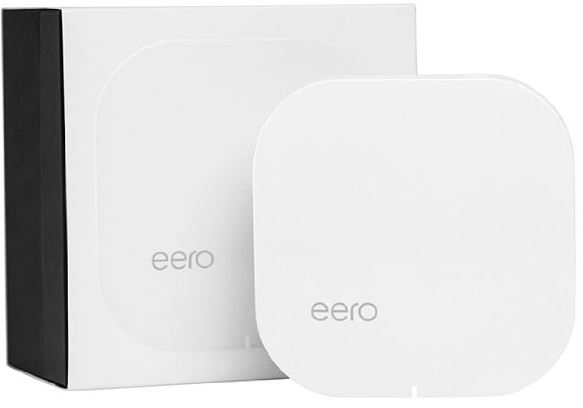 The concept behind Eero was to take WiFi connections you’d normally find in professional settings and make them accessible to the average household while doing so in a series of small white boxes. These boxes connect to your phone with a simple app and let you retain full control over your new stable network.

The Eero Home WiFi System is a class of its own and so far very few devices can compete. Think of it as a few white, small, minimalistic-designed units that you simply place in different areas throughout your house. Three Eero units is enough to cover a regular mid-sized home including the backyard. The main Eero unit simply connects via cable to your modem (using the latest Gigabit-fast WAN port) and other units are simply placed in power sockets around the house. 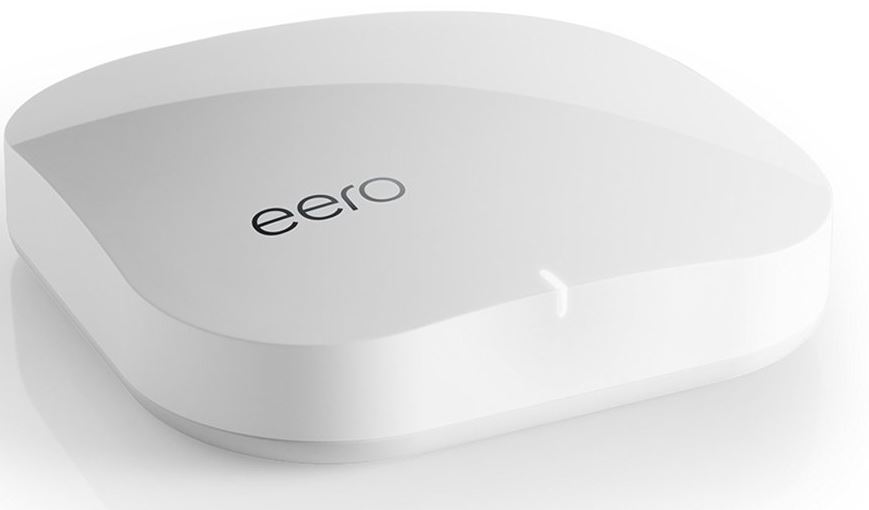 As soon as you’ve plugged them in (the setup should take a grand total of 2 minutes), it automatically bands these units together, binding them into a single network. After that it starts transferring data between the different units so you end up getting the same speeds in every area of your house, while retaining full control of it even when away from the main unit.

If you’re relying on a single router exclusively you’ll be missing out because the Eero can switch between regular 2.4GHz and 5GHz frequencies (in case of unexpected signal interferences) and provide you with different paths so all data can be transferred efficiently. The units also take advantage of separate radios in order to differentiate between your devices (laptops, phones, tablets) and other Eero units. This makes it vastly superior to the average router and it will strengthen your connection by a significant margin. If your work can’t do without a stable internet connection, the Eero is an absolute must. A single network can support up to 10 Eero units and this is especially useful if you’re running a resort/workspace where you’ll have a lot of people connected and prefer to have every inch covered on equal terms.

One thing you’ll notice if you’ve been relying on a single router, or even comparative to the average extender – the Eero is a system that not only covers all areas of the house but also equalizes speeds across the board thus users can enjoy it irrespective of their location. Eero’s software is extremely flexible and it will help you adjust your connection for multiple devices, while the main operating/managing software is a simple app.

The connection management is mostly cloud based and it will be easy for you to receive software/security updates the minute that they’re released. You will always be prompted about chances in relation to your network, the devices connected as well as the history. Nothing slips by the Eero. On top of that, the system comes with a Bluetooth connectivity feature in case WiFi alone isn’t enough. You can choose to deactivate this feature if you don’t have Bluetooth devices that could use the connection, but for those who do this is definitely an advantage being that most devices on the market lack it.

Parental Control/List Of People Who Connected

If you’re paranoid about people hacking into your network or simply prefer reports on internet activity you can later examine, you can easily do that using the “weekly digest” feature. It basically gives you a report that contains all information related to the activities, and only a single person (administrator) has access to the data.

As you can imagine based on the photos you’ve seen, the founders designed Eero with simplicity in mind. They made it suitable for most interiors, and the units self manage. However, the control system is top notch because it gives you full control over your network via a single app. All you do is download it on your iOS/Android device and it connects to your Eero units via Bluetooth. 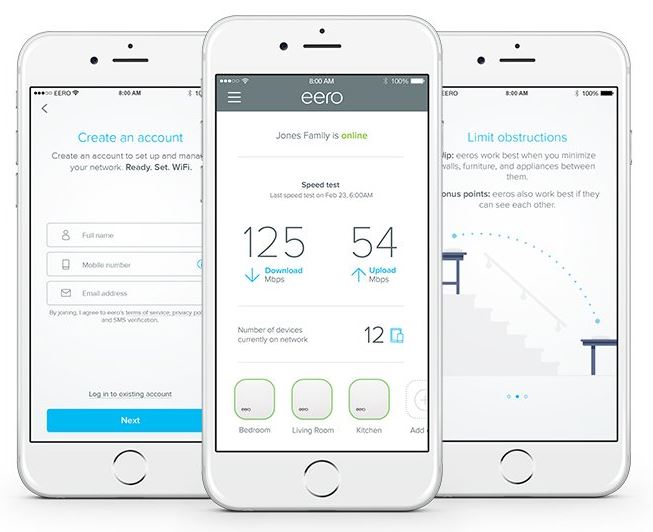 Eero App offers full adjustability over your network and you can everything from checking the current speeds to inviting devices to connect to it and being prompted whenever someone makes a connection attempt. You can send network information (like a user+pass combo) via text message with the press of a button. Another benefit to the cloud system is that it automatically does routine checkups, makes updates and improves security. The whole system has minimal maintenance.

A single Eero is around 5×5 inches (12x12cm) and with its simplistic design it should be suitable for most interiors. When it comes to internal mechanics, it comes with 512MB RAM memory, 1GHz processor and 1GB storage space. It’s compatible with IEEE 802.11a/b/g/n/ac networks.

Final Thoughts – Is It Worth It?

The bottom line is that the Eero Home WiFi System is top-tier – it functions in a different way to your average extender and entirely removes buffering/the need to reset your router. The way it was designed is to allow for an extremely fast data transfer between multiple Eero units (without the need for cables) – therefore no areas are left without stable coverage. It looks simple and it is simple but it gets the job done. Granted you’ll need a few minutes to set everything up and the only downside is that it doesn’t work without the app.

The Eero App provides absolute control over your networks, connected devices and usage history. It’s also suitable for company working spaces/small residential buildings because if your guests request connection information, you can message it to them in a second. Finally, the fact that this device is almost entirely self-managing is beneficial because it detects and fixes its own problems so you’re not forced to restart your router at all. This type of technology was previously reserved for commercial buildings only and now it’s available for the average household so it should make the top of your consideration list.