These days, most of our devices charge via USB. Smartphones, tablets, and yes, even many laptops now charge using USB Type-A or Type-C. As a result, a USB fast charger will cover most of your needs. But despite its ubiquity, USB is far from universal, particularly among laptops. For one thing, USB Type-C provides a maximum of 100 watts, which isn’t enough for many laptops. For another thing, many manufacturers have been using the same chargers for years. Why ditch the same barrel-style adapters you’ve been using for years? As the saying goes, if it ain’t broke, don’t fix it.

Unfortunately, there’s no single standard DC charger. In fact, there are dozens of standards, used by various manufacturers for various products. This wild west atmosphere is no problem when you first buy your laptop. You just use the charger that’s included with the package. But what happens when the charger breaks? Sometimes, it can be difficult to get a replacement from the manufacturer, or exorbitantly expensive. And if you’re looking for a replacement, you can end up going down a rabbit hole of options. In many cases, the most sensible thing to do is just to buy a universal charger.

Today, we’re going to review three of the best universal 12-volt DC laptop chargers for your car. We’ll start with the Aisilk Universal 100W Laptop Car Charger, a long, durable charging cable. We’ll continue with the Belker 90W Universal Laptop DC Car Adapter Charger. This charger has a fob in the middle, with a second USB charging plug in the side. We’ll finish up by reviewing the Outtag 65W Universal Laptop Car Charger. This charger has a more traditional design, with a rectangular adapter built into the cable. Which one is the best choice for you? Let’s take a closer look, and see how these three chargers compare. 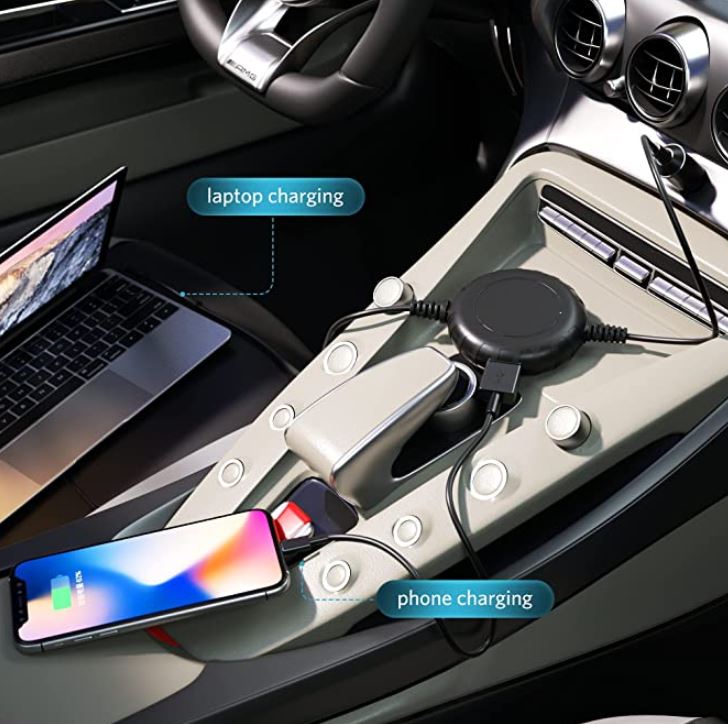 The short answer is to look at the name. For example, if you have an M5 tip, you’ll need an M5 replacement. But that name isn’t always easy to find. In this case, you’ll need to check your charger’s specifications. Here’s a quick overview of how to determine whether or not you’ve got the right charger.

There are three numbers that determine the amount of current in a charger: volts, amps, and watts. Getting these numbers right is important, particularly the voltage. If the voltage is wrong for your laptop, the charger flat out won’t work. Most laptop chargers deliver three, five, six, nine, 12, or 18 volts, but there are some outliers. Check your owner’s manual if you’re not sure. 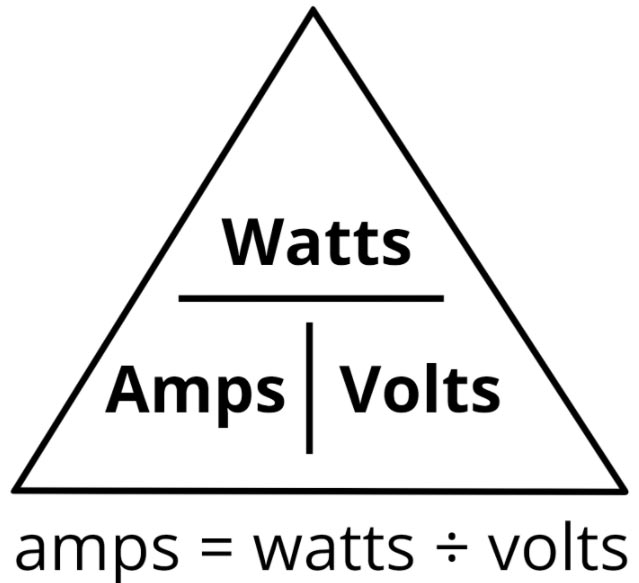 Volts are a measurement of a circuit’s maximum capacity. Many electronics manuals describe a circuit as a river, with electricity flowing through it instead of water. In this analogy, the voltage is the width of the river bed. But the same width river can flow with a different intensity. To continue our river analogy, amps are a measurement of the current’s intensity. You can have a narrow river that’s barely more than a creek, but it’s whitewater rapids (low voltage, high amperage). Or, you can have a wide river that flows so slowly it looks still (high voltage, low amperage).

Amperage, unlike voltage, does not have to be perfectly matched to your laptop. If you have a high-amperage charger, it can still be used to power a lower-amperage laptop. The reverse is not true, though. A lower-amperage charger won’t have enough juice to power a higher-amperage device. On occasion, you can get away with using a lower-amp charger if there’s not much difference. This is rarely advisable, though. If your laptop needs to draw maximum power, it could trip over-power circuitry in the charger and shut down. If that safety feature fails, it could even get hot enough to start your charger on fire.

To carry our river analogy to its conclusion, wattage is a measurement of the volume of water. In real world terms, it’s a measurement of the total electrical power. Determining the wattage of a circuit is simple. You take the voltage and amperage, and multiply them together. For example, a standard USB charger delivers 5 volts, 2.4 amps. 5 x 2.4 = 12, so the port is delivering 12 watts of power. Conversely, if you know the wattage and voltage, you can easily determine the amperage. For example, suppose your charger delivers 100 watts at 10 volts. 100/10 is 10, or 10 amps. You can do the same thing to determine voltage from wattage and amperage. This is a useful skill, since not all chargers will list all three numbers. But if you know at least two of them, you can determine the third one.

In addition to the amount of power delivered, another important charger feature is the polarity. On a barrel-style plug, the outside and inside of the barrel function like the prongs on a standard cord. One is positive, and one is negative. Unfortunately, there’s no set standard as to which is which. Some chargers have the positive contact on the inside, while others have it on the outside. This is an important thing to get right. At best, you’ll blow your laptop’s polarity fuse. At worst, if your laptop doesn’t have one, you can burn out the entire machine. You might even start a fire. You’ll certainly need a new charger. 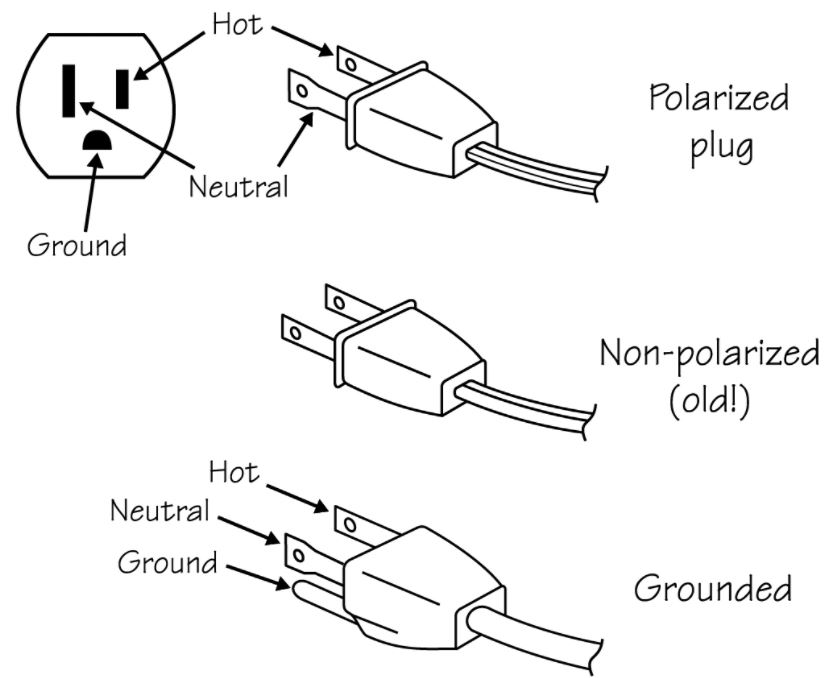 In contrast to the current and plug polarity, the diameter isn’t terribly complicated. DC charger plugs are measured in millimeters, as is appropriate for their small size. There are also two numbers: the outside diameter and the inside diameter. Normally, these will be indicated as “OD” and “ID.” For example, a plug might be listed as “4mm OD x 1.7mm ID”. Some manufacturers will omit the “OD” and the “ID” altogether. That’s just fine. As should be obvious, the smaller number will be the inside diameter. 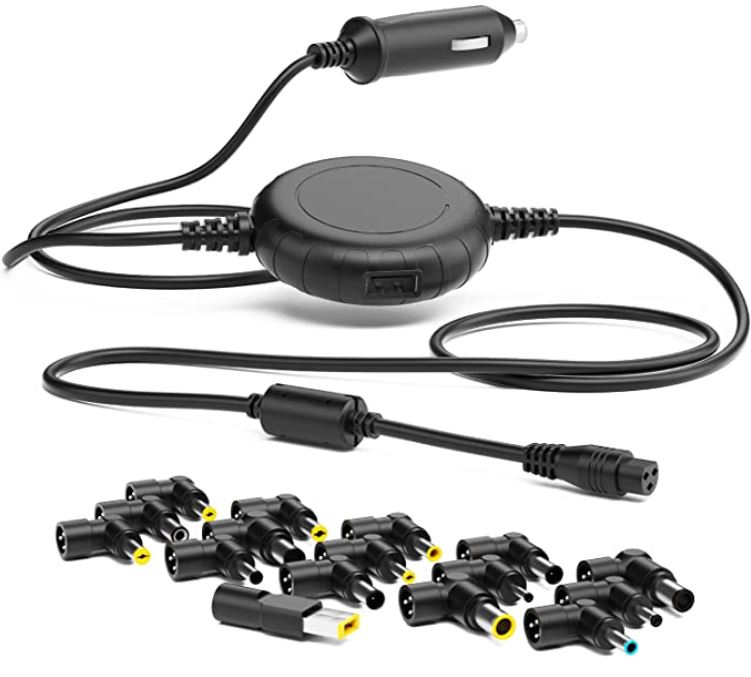 The Aisilk Universal 100W Laptop Car Charger consists of a 6.2-foot black cable with a fob in the middle. This fob measures 2.7 inches in diameter, and is constructed from durable ABS plastic. All of the material is black in color, and is tough and durable. The adapter fob is fire-resistant, and contains circuitry for short circuits, overcurrent, overvoltage, and overheating. In the side of the fob, you’ll notice a USB port, which can bs used for charging your smartphone or another device. You can do this freely, without interfering with your laptop’s charging process. 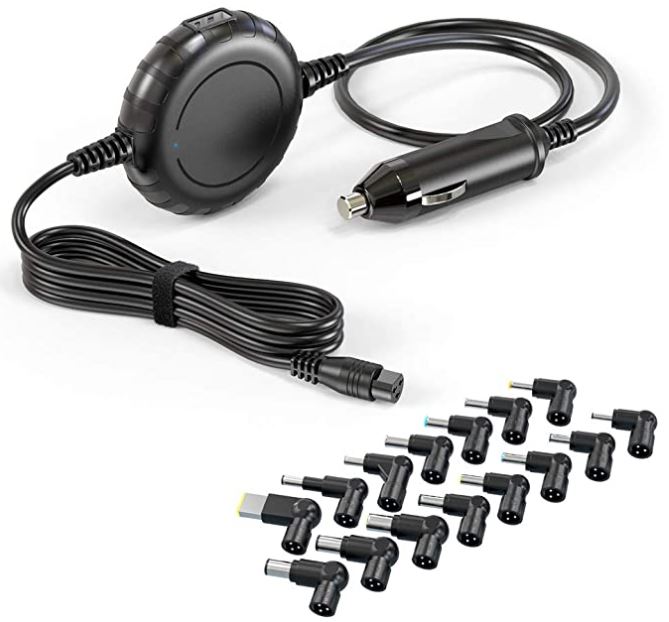 Belker is a well-known manufacturer we’ve reviewed in the past. For example, they make some universal AC laptop chargers that we very much liked. So we were eager to see how their DC car charger stacked up to the AC version. The first thing you’ll notice is that the cord is a bit longer than the Aisilk’s. It measures 1.8 feet from the plug to the fob, and 4.9 feet from the fob to the adapter tip. This gives you a total of 6.7 feet to play with. And as with the Aisilk charger, there’s a USB charging port in the side of the circular fob. You also get similar safety features. Surge protection and short circuit protection are built into the circuitry. 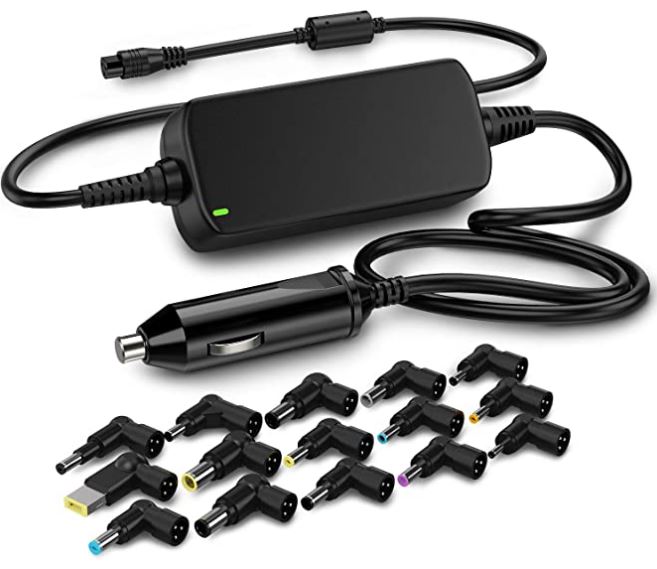 The Outtag 65W Universal Laptop Car Charger is a bit different than the last two options. It has a rectangular adapter in the cord, rather than a circular one. But it’s still well-engineered, with protection from high temperature, short circuits, and over-voltage. In fact, Outtag provides a 30-day money back guarantee and a 12-month warranty. That’s not half bad for an inexpensive charger! You also get plenty of reach, with a total length of five feet.

As you can see, there’s a lot of overlap between these three cables. The Aisilk Universal 100W Laptop Car Charger and the Belker 90W Universal Laptop DC Car Adapter Charger are nearly identical. Both come with most of the same adapters, and have a similar design. The only real difference is the adapter in the middle of the cord, which is purely cosmetic. The Outtag 65W Universal Laptop Car Charger is a bit different, since it comes with many different tips. That said, if you have a choice, the Outtag or the Aisilk will be ideal. The added USB port in the side of the fob is just too good to pass up.