Inverters are burdened with the difficult task of converting DC power to AC power. For smaller and more portable pure inverters, more often than not, that means converting from the DC current of a battery to the AC current used by most household appliances.

AC generators have their place. If you’re willing to transport and burn fuel, endure fumes, and ignore the roar of an engine, then common gas power generators can be used to replace an inverter. But for making use of lithium ion powered battery stations, there’s not many ways to get around the necessity for a pure sine wave inverter.

With the right inverter, you can be ready to safely power appliances and sensitive electronics alike, including computers, audio equipment, game systems, applicants, battery chargers, refrigerators, heaters, and so on. Whether you’re a truck driver on the road to bring the comfort of home with you, or you’re just looking to be prepared for a blackout, finding the right inverter is the first thing you need.

Selecting an inverter isn’t that tough, and you don’t need to be an electrician to make sense of how to choose one. But it does help if you know a few things to guide along your selection. You’ll want to understand the difference between modified waves and pure sine waves, take a quick evaluation of how much use you anticipate to place on the inverter, and reflect on the build quality relative to the stresses you’ll be placing it under.

The two common types of wave formers created by inverters are true sine wave and modified sine wave. The second category is one you’ll most likely want to avoid. Modified sine wave inverters are less expensive because they’re creating what is essentially an imitation of a pure sine wave. Unfortunately, this imitation is far more likely to damage sensitive electronics, and it tends to produce EM interference.

Further still, a variety of ground-fault interrupt devices aren’t going to properly operate with these types of inverters. By contrast, pure sine wave inverters are constructed to produce AC that’s nearly identical to the current running in the walls of your home. And pure sine wave inversion is specifically equipped to help support sensitive electronics. 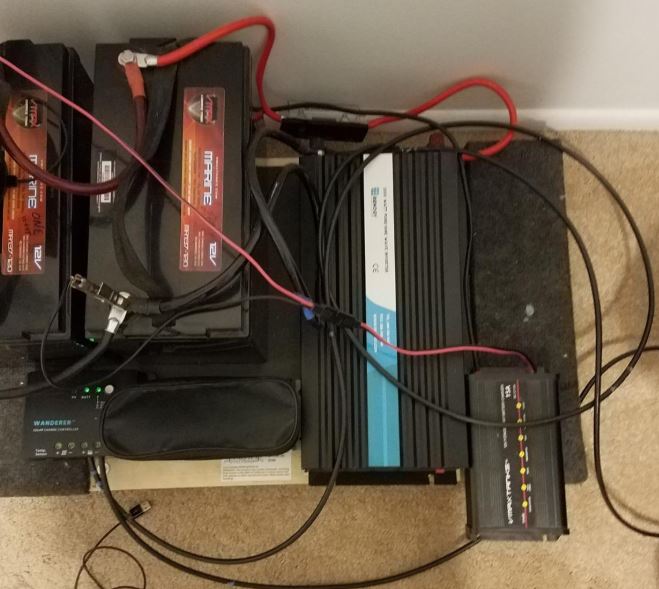 Smaller inverters often use fewer AC power plugs, but may favor car lighter adapters or USB ports. These types of inverters are generally for very light-duty work, like recharging a phone. But somewhat larger inverters are necessary if you plan on operating heavier equipment.

Pure sine wave inverters aren’t usually complicated to use, but given the potentially dangerous nature of electrical equipment, it’s critical to select inverters with a full range of safety features. That’s necessary for avoiding injuries as well as minimizing maintenance issues. Things to look for include cooling capacity, under voltage protection, and overvoltage protection. The latter two ensures damage doesn’t happen if voltage dips outside the normal range.

Often times, manufacturer’s will post mention of matching specific safety standards. Generalized safety standards are useful for determining whether or not it’s safe to operate the equipment. You may also want to look for. For example, SAE J1445 indicates electronics have been prepared to hand the harsh vibrational conditions, as may be necessary by trucking or RV campers.

Inverters that aren’t built as well may cost less out of the gate. But they can cost more in the long term if they reduce battery life, damage your devices, or need extra maintenance of the electrical system of your vehicle. In short, a low-quality inverter can be a potential safety hazard. 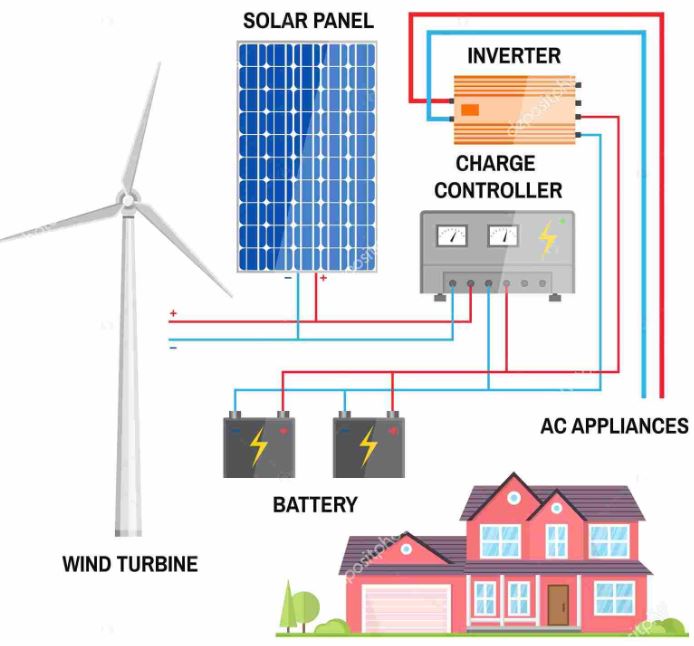 Find out the wattage that you’d like to be able to use among all connected devices, and provide a 20% margin to the calculation. For example, a typical TV may consume 80W, and a Satellite Receiver may consume 20 watts. If those were the only things you wanted to connect to the inverter, you’d want to aim for 120-watts.

Another thing to watch for is higher electrical efficiency. That means the inverter is drawing less battery current, and consequently will run a bit cooler. Efficiency ratings vary quite a bit, but are often between 70-90%.

And finally, pay close attention because wattage ratings can be tricky or misleading. Microwaves which are listed at 600-watts may actually be telling you about their cooking power, not about their total power consumption. Surge power and peak power ratings involves devices which require extra power to start-up, or otherwise have variable power use while they’re on. 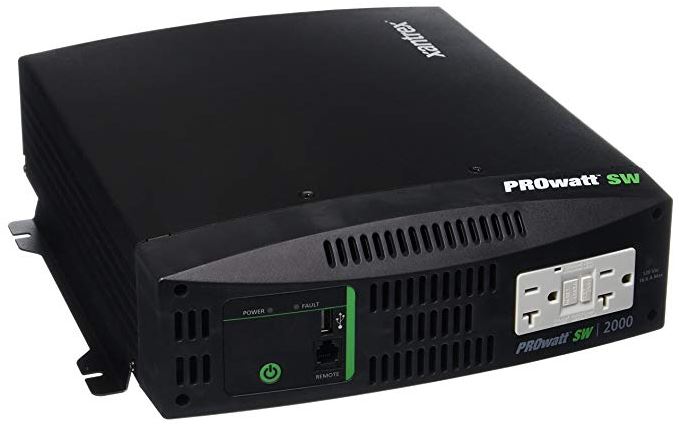 The Xantrex PROWatt 2000 Inverter has many things going for it. With respect to portability, it’s small enough to slide out of the way under a vehicle seat. With respect to capability, it’s a fairly versatile and accessible inverter, offering an expansive range of input and output options. And it even has a few interesting surprises in store for people who are no strangers this type of equipment.

Once you’ve got it set in position, the Xantrex PROWatt 2000 stands 15” tall and about 12” in length, with only 6-inches of depth. It loosely resembles a small computer that’s placed flat on the ground, which allows it to slide comfortably under car seats. This inverter was fairly clearly made with portability in mind. 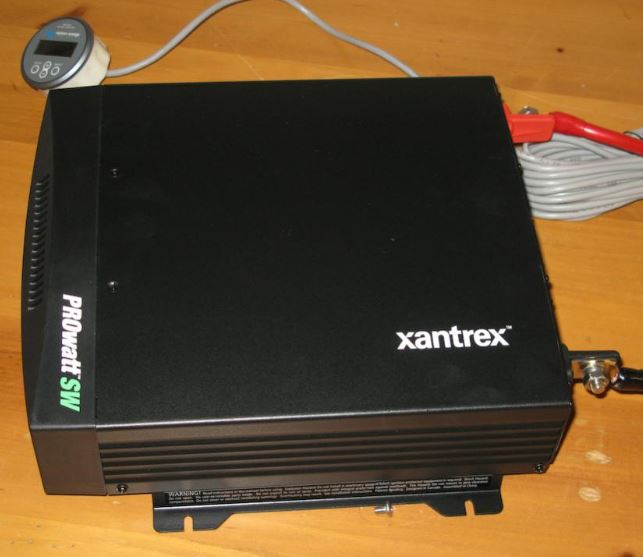 Looking at it, you’ll almost immediately notice the built-in digital display helps you keep an eye in the output power. The Xantrex PROWatt 2000 Inverter is a 2,000-watt inverter. But its surge rating is actually 3,000 watts, with a continuous use rating at 1800W.

Along its face, there are two standard power plugs, the remote port, a power button, and two LEDs to give you information about the status of the inverter. There are also a pair of reset buttons, one for each of the 120V AC 16.6A power plugs. And a built-in USB port allows for rapid USB recharging through 2AC.

Multiple GFCI AC receptacles make for easy and safe use of the inverter, and the topside has heavy terminals you can use for easy battery connections. The on/off remote switch makes things simpler if you plan on operating your system from a distance, and for people who are using their vehicles, it can even be paired with ignition lockout. 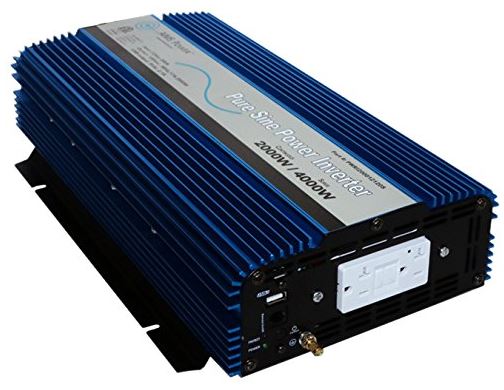 The AIMS 2000 Watt Pure Sine Power Inverter sits 19 x 10 x 5.5-inches, weighing about 12 pounds. The backside is easily wall-mounted with two simple screws, which can be placed into positioned spaces along the inverter. This heavy-duty inverter is ideal for running PCs, appliances, heaters, bright work lights, and similar AC units. 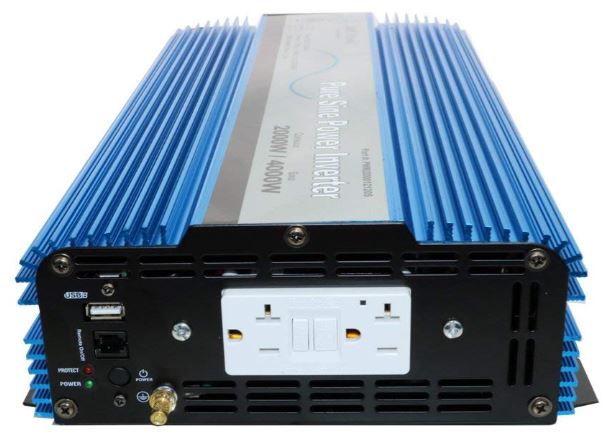 Along the face of the AIMS inverter, you’ll find two standard AC ports, and two reset buttons. There’s also a remote port, on/off button, USB port, and protection-appraisal lighting to keep you informed of the status of your system. The 2,000-watt rating actually refers to continuous power, provided you’re working within 16.6 amps.

This inverter is EPL Certified to meet UL 458 standard. It includes a two-year warranty from Aims. The output frequency is 50 or 60Hz, which means that its current can be adapted for use in many parts of the world, including most of Europe. The remote port can be paired with an optional on/off remote for mobile operation of the system, but that remote isn’t included with this kit. 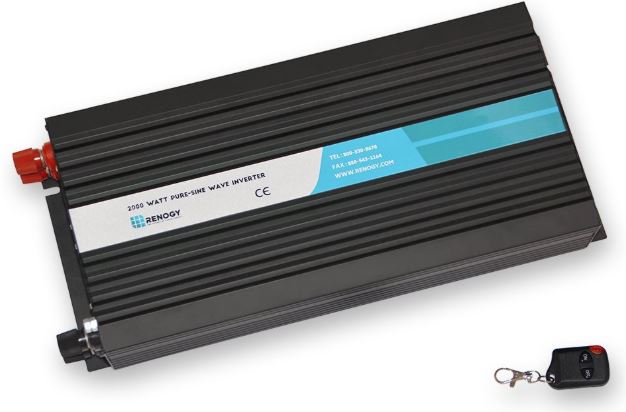 The Renogy 2000W 12V Off-Grid Pure-Sine Wave Battery Inverter is fairly close to what you’d call the standard option. But compared to similar products, this inverter is more oriented towards remote accessibility and multiple users. That may not make it the right choice for individual use, but it’s a much more adaptable choice for groups of people who need access to power.

The end of the inverter is covered in four 110 AC sockets, along with the five LED indicators which are well-labeled. Here’s where you’ll also find the bright red power switch, and a single USB charging slot. The inverter itself measures 17.6 x 7.8 x 3.2-inches, and weighs in just under 13 pounds. While it doesn’t look quite as space-aged as the AIMS inverter, it is equipped with fully adequate cooling thanks to two high-speed ventilation fans. And it’s got a fairly wide operating temperature from 14°F to 122°F. 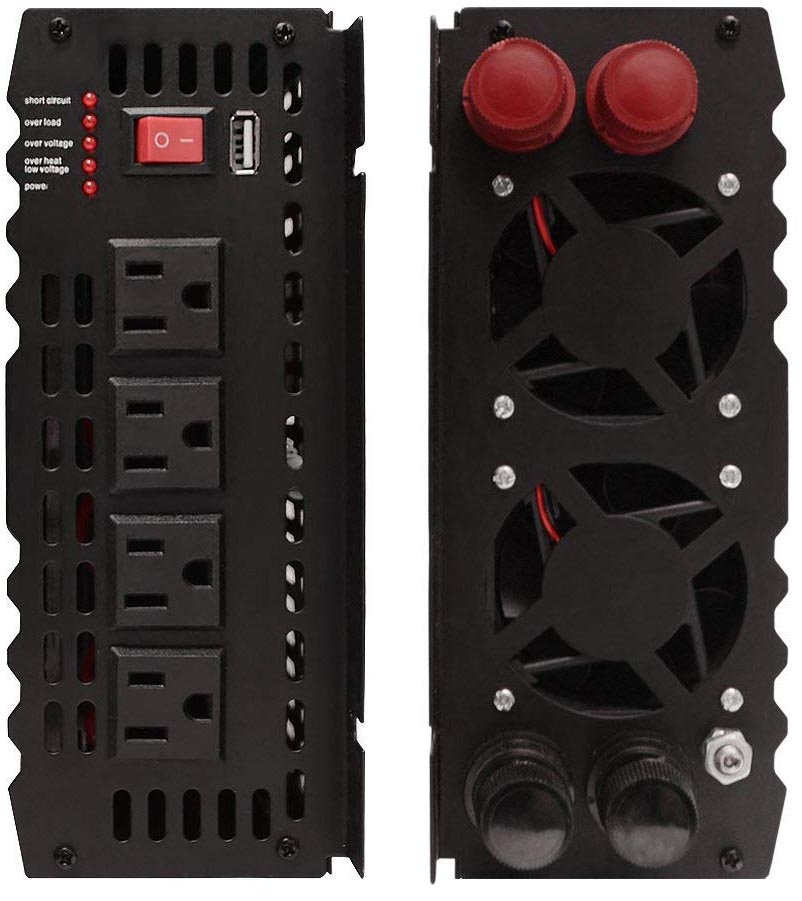 This inverter includes two AWG inverter cables which you can connect to a battery. There’s also a keychain remote, which is included in the kit. The remote has a distance of up to 170 feet, which is fairly impressive for a wireless remote. Its keychain-remote design uses an intuitive on/off button, along with a red light to let you know the command has been received.

It may be worth noting, Renogy printed their telephone and website address on the inverter, just in case you encounter a problem in the middle of nowhere and need support. The Renogy 2000W inverter also includes a 5-year warranty, which excludes the remote and any damage to wiring.

The Renogy 2000W 12V Off-Grid Pure Sine Wave Inverter is a good mobile selection for people who are interested in portability. It has four powerful AC sockets, and is generally one of the more compact inverters on the market. Especially with respect to how easy it is to store or hide-away, the Renogy 2000W inverter is worth a close look.

Finally, the Xantrex PROWatt 2000 is a good choice for someone running high wattage electronics like hair dryers, coffee, makers, microwaves, and so forth. The surge watt and continuous use rating of this enormous, and capable of handling virtually any household device you can throw at it. It’s an excellent choice for someone who’s looking for an inverter that can really support the upper limits of its listed wattage.