The PlayStation 4 is one of the most popular game consoles of all time. With over 116 million in lifetime sales, it’s surpassed only by three other consoles. And as the fourth console in the PlayStation line, its controller is very similar to the original’s. To be fair, there are some noticeable upgrades. The DualShock 4 controller has a touchpad, to begin with. It also has more finely-tuned analog sticks, and extra function buttons. Oh, and the DualShock 4 is wireless, a significant improvement from the wired DualShock 1 and 2. But for the most part, the design has remained the same. The form factor is still slim, the buttons layout is still identical, and the analog sticks are still frustratingly symmetrical.

The PS4 is technically a last-generation console now, but it still has some life left in it. For one thing, supply shortages have slowed the release of the newer PS5. There are still a lot of gamers who want to upgrade, but haven’t been able to get their hands on one. As a result, publishers have been pushing their next-gen exclusives into next year. Currently, there just aren’t that many games you can’t still play on the PlayStation 4. But just because the PS4 is still a viable platform doesn’t mean your individual parts are going to last forever. And one of the first things to go on any game console is the controller. But what if you don’t want to pay full price for a Sony replacement? 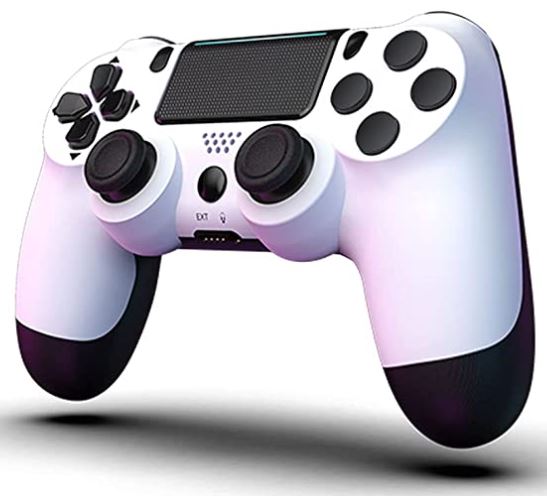 The Medvoe Wireless PS4 Controller is a third-party replacement controller that’s similar to the DualShock 4 in most respects. It comes in two variants, both with a mostly-white housing. One has black buttons, thumb sticks, and highlights, while the other is highlighted in electric blue. Other than that, they’re identical in both form and function.

The buttons are unmarked, without any of the standard triangle, square, circle, and X symbols. This won’t be an issue for veteran PlayStation players. However, it can be annoying if you primarily play an Xbox, since the X button is in a different place. The D-pad is identical to the original DualShock, and consists of four separate buttons in a cross formation. The buttons are all responsive and functional, but they feel a little bit stiff. This isn’t an issue for straightforward presses, but it can be problematic when you need pressure sensitivity. Then again, this controller is far more affordable than a Sony replacement. You can’t expect it to perform at exactly the same level. 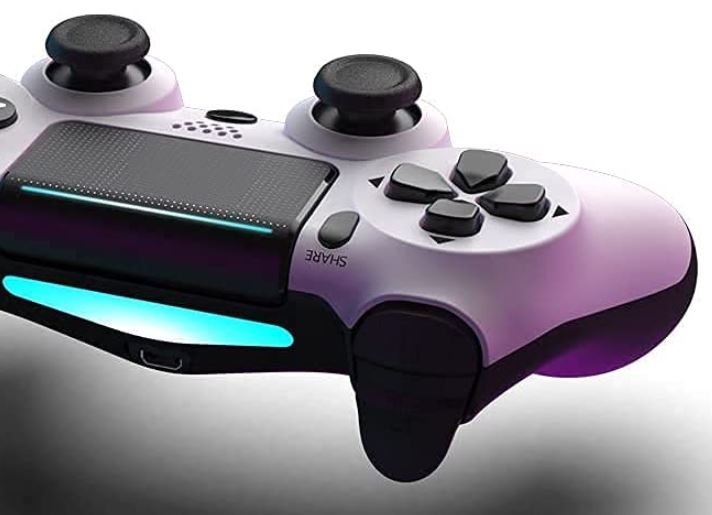 The sticks and triggers have also been slightly modified. The triggers are actually built as single units, with the L1 and L2 buttons combined into one. The same is the case for the R1 and R2 buttons. The design actually works quite well, and the trigger operation feels very smooth. You’ll have no trouble with any of their functions. The thumb sticks are virtually identical to the DualShock 4’s in terms of appearance. They’re lightly textured, with a slight cup on the top face. However, they have a noticeably wider dead zone. This means there’s a lot of play in them. As a result, it can be tougher to get on target in first-person shooters and other games that require precision. Whether or not this is a problem will depend on what types of games you usually play.

The Medvoe controller has the same dual motors as the DualShock 4. These dual motors are actually what the DualShock is named for. They give better tactile feedback than a single motor alone. For example, if there’s an explosion to your character’s right, you’ll feel the sensation from that direction. The textured touch pad is easy to use, and identical to the DualShock. Another identical feature is the integrated light bar on the front of the controller. 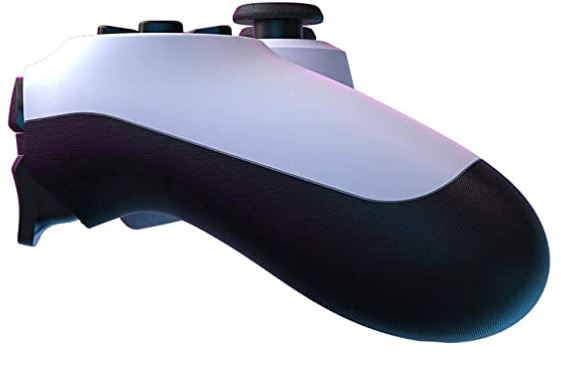 On the back side of the controller, you’ll find a 3.5mm aux jack. This allows you to plug in a pair of wired headphones or a wired headset. The controller sports a set of built-in volume controls. This makes it easy to adjust your volume without taking your hands off of the grips.

This replacement controller will work with any PlayStation 4, including the PS4 Pro and PS4 Slim. That said, it will not work with a MC, Mac, or other game console. It pairs much the same way as the original DualShock 4. You plug it into your PlayStation, press and hold the pair button, and you’re set. After that, it will pair automatically when it’s turned on. There’s a Micro USB cable included in the package, which you can use both for charging and for pairing. 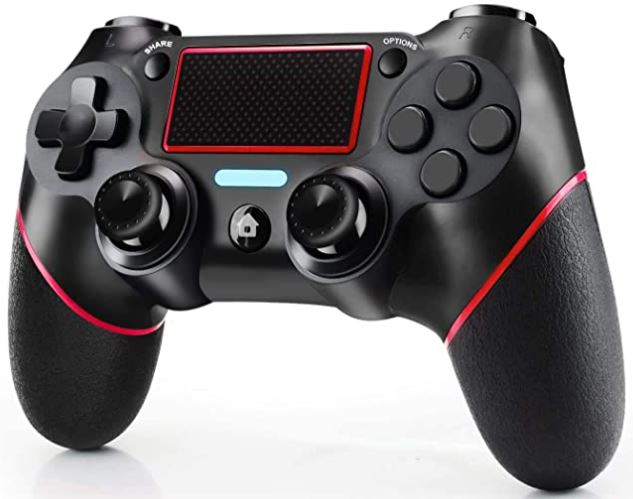 Jusubb is a manufacturer we’ve reviewed a few times in the past. Among their other offerings, we actually reviewed their wired PS4 controller. So it made sense to go back to the well and see how their wireless controller performs.

The Jusubb Wireless PS4 Controller has a sharp-looking aesthetic. The housing is mostly black, but with red highlight rings on the grips and around the touch pad. The grip highlights aren’t just aesthetic, either. They mark the boundary between the main plastic housing and the anti-slip silicone grips. These textured grips are nice and soft, and easy to hold onto when you’ve got sweaty hands. 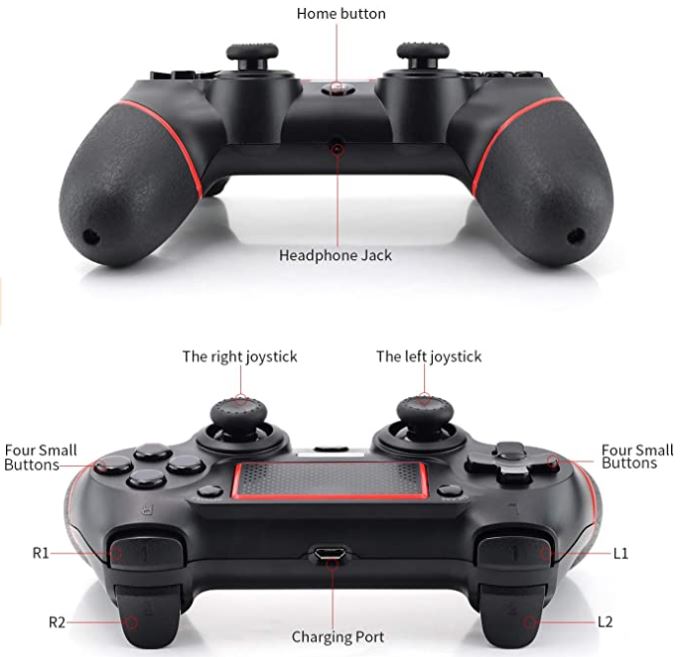 Like the Medvoe controller, there are no markings on the buttons. This is in keeping with the controller’s overall minimalist design. The buttons don’t feel quite as sticky, though, and operate more smoothly. The analog sticks are smooth and glossy, with a textured outer edge that makes them easy to operate. That said, they also have a lot of extra play in them. This won’t be ideal if you play a lot of games that require accuracy. In addition, there’s an identical dual-motor function. You won’t notice any difference between this and the DualShock 4 in terms of haptic feedback.

One area where the controls are vastly different is the design of the D-pad. The DualShock 4 has a split D-pad, consisting of four separate buttons. The Jusubb controller has a cross-shaped, single-piece D-pad, similar to the Xbox. This makes it marginally easier to move the D-pad on a diagonal. But in most cases, you won’t really notice the difference. 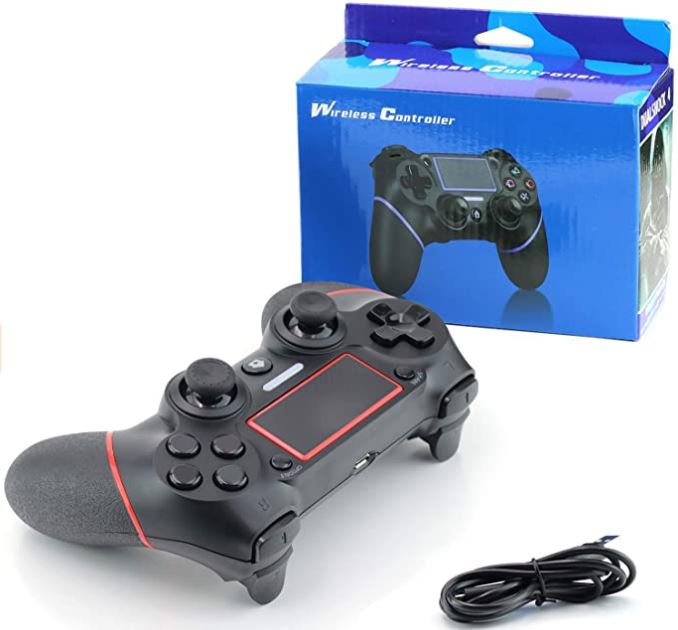 The touchpad is smooth, rather than textured. The light bar is also different. Instead of being located on the front, it’s small and rectangular, and located on the controller’s upper surface. Beneath that, you’ll find the 3.5mm aux jack. This makes it simple to use headphones or a headset.

The Jusubb controller is compatible not just with all versions of PlayStation 4, but also with most PCs. It will work with any version of Windows, starting with Windows 7. It also comes with a Micro USB cable for charging and easy pairing. 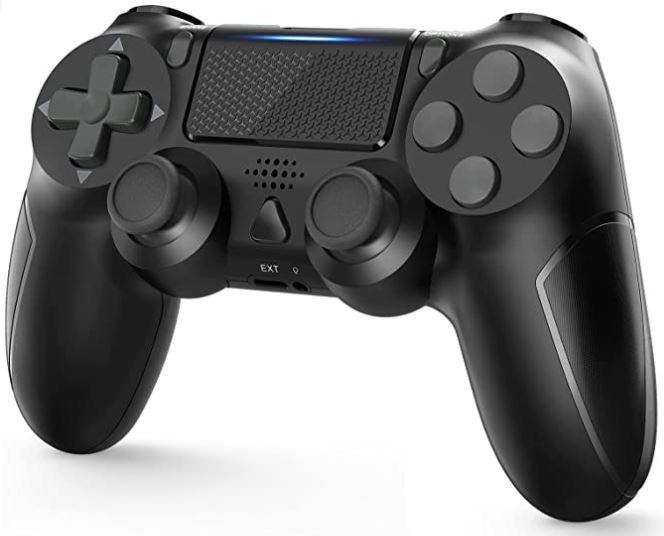 YCCTEAM is another manufacturer we’ve reviewed in the past. They produce a number of accessories, including a well-engineered Nintendo Switch charging stand. The YCCTEAM Wireless PS4 Controller is available in three colors: black, white, and candy apple red. The textured touchpad is always black, providing a slick contrast on the white and red variants. It has the same form factor as a standard DualShock 4, complete with a fingerprint-resistant matte finish. 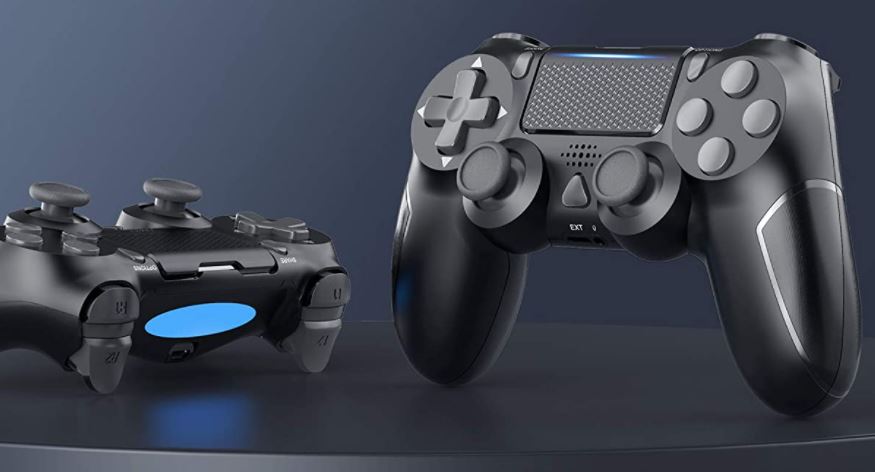 The buttons have a standard layout, with no markings whatsoever. Like the touchpad, they’re also always black. This gives the all-black controller a beautiful look, akin to a blacked-out motorcycle. They feel good under your thumb, and generally work smoothly. As with any inexpensive controller, though, they will occasionally stick. The analog sticks are an ordinary DualShock style, with textured, concave tops on relatively short stems. As with our other replacement controllers, the dead zone allows for a bit of play.

This controller comes with a single-piece, cross-shaped D-pad. It sports a front light bar identical to the standard DualShock 4, and works with all versions of the PS4. The kit includes a USB cable, just as the other two kits do. 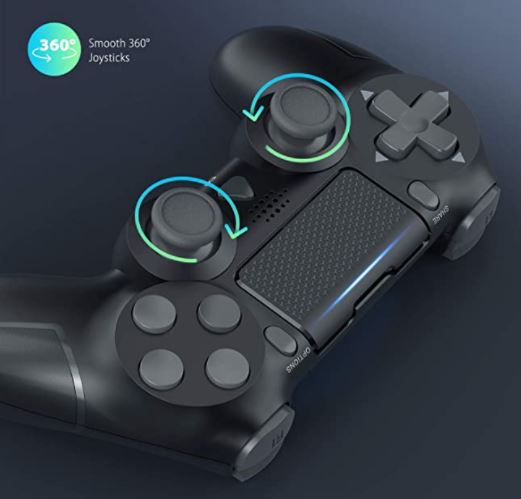 That said, there are a couple of extra features worth mentioning. To begin with, the battery is extraordinarily long-lasting. It will run for 10 hours of normal use, enough for a full day of gaming. In addition to that, there’s a set of speakers built into the top of the housing. They’re not exactly studio quality, but they’re great for relatively quiet gaming situations. They’re also helpful if you’re playing on a bare monitor without any speakers. Of course, if you want better quality, you can just use headphones. There’s a 3.5mm aux jack in the controller for doing just that.

As you can see, each of these aftermarket PS4 controllers has its own unique benefits. If you’re already in love with the DualShock 4 controller, the Medvoe Wireless Controller will be ideal. It’s virtually identical, outside of a few cosmetic details. It also has adjustable volume controls, which is a nice added feature.

The Jusubb Wireless PS4 Controller is a better choice if you prefer a textured grip. It also looks really sharp, and sports a single-piece D-pad. The YCCTEAM Wireless PS4 Controller is the most unique controller of the bunch. With its built-in speakers, it gives you another option for in-game audio. It comes in three colors, each of which looks fantastic. It’s also got a single-piece D-pad, a feature many gamers prefer.