Road safety is no joke. While traffic-related deaths have been steadily on the decline for decades, they’re still tragically common. This is particularly true for children. Despite decades of safety improvements, auto accidents remain the #2 cause of death for American children.

Some of this can be chalked up to the fact that children are more fragile than adults. Their bones haven’t fully fused, and their smaller bodies are more vulnerable to injury. A lot of this also has to do with inexperienced drivers.

Drivers are significantly more likely to get in an accident when they’ve first started driving. And the majority of brand new drivers are teenagers. A brand new, 16-year-old driver is more likely to crash than a 35-year-old who’s been driving for 18 years. This difference in experience no doubt skews the statistics.

But children are also more likely to run out in front of traffic. This is even more true nowadays than it was in the past. 20 years ago, a 14-year-old could be counted on to cross the street without getting distracted. These days, with smartphones and other devices, there are plenty of grown adults who get careless while crossing the street.

That’s why we have “school zones” around our schools, with reduced speed limits. Because there’s a large concentration of kids in the area, we want the roads to be extra safe. This often involves the use of light-up speed limit signs, and even roadside speed monitors. The more signage and visibility, the more people slow down.

Along the same lines, it can make sense to use flashing stop signs in and around school parking lots. The principle here is the same as a lit speed limit sign. You’re drawing prominent attention to it, ensuring that more people come to a full stop. 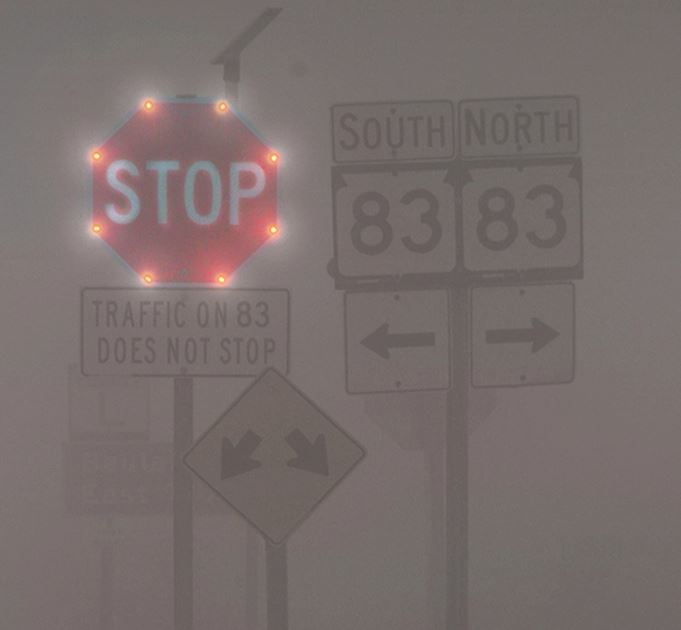 Today, we’re going to review three of the best blinking LED stop signs we could find. These signs are all designed for ultra-high visibility, with built in lights and highly reflective surfaces. They’re also solar-powered, which means you won’t have to worry about running wires to them.

To find out which one is the best, we’ll have to take a deep look into each of our options. We’ll go over the physical design, both of the sign itself and the attached solar panel. We’ll talk about how the lights are operated, and how they function.

Additionally, we’ll look into the battery life, how long it lasts, and other relevant features. After we’ve gone over all of these features, we’ll have a complete picture of each sign. At that point, we’ll sum up what we’ve learned, and deliver our verdict. Let’s begin! 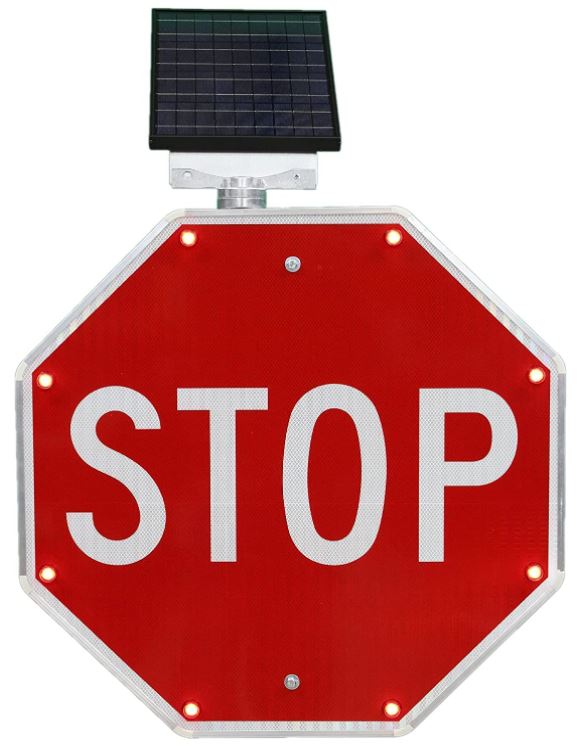 The Stop-Lite LED 30” Solar Stop Sign has a 30-inch diameter, just as the name implies. This is significant, because 30 inches is the standard size for stop signs on U.S. roads. As a result, you get a couple of benefits. For one thing, municipalities can install these signs on roads; they’re not just for private property. For another thing, people will be more likely to notice signs if they’re a standard size. 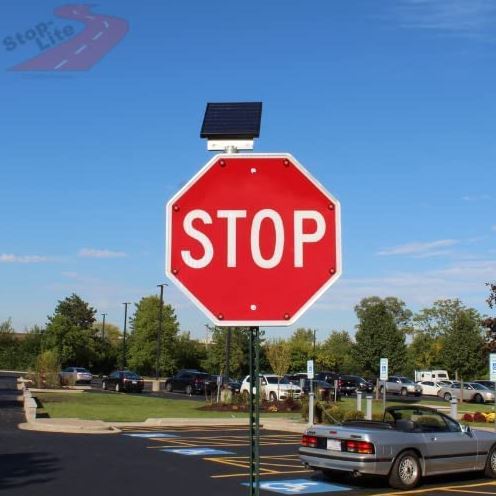 At the top of the sign, there’s a large, 18-watt, 20-volt solar panel. This panel is attached to the back of the sign via a sturdy vertical mount, so it’s surprisingly rigid. Unless your sign is positioned under a tree, you won’t have any trouble getting plenty of power. 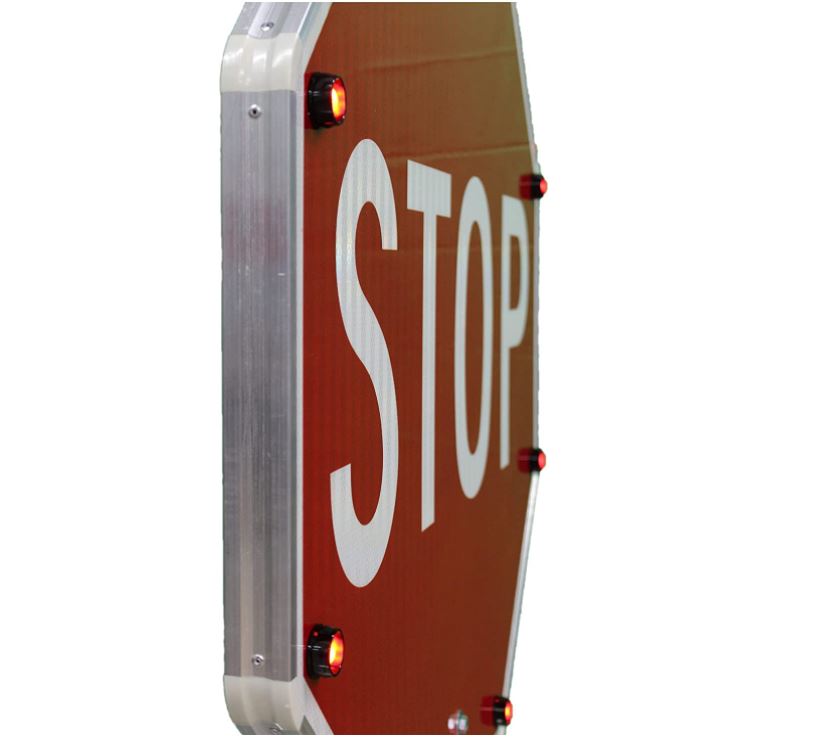 Mounting this stop sign is easy. There’s a vertical rod welded to the back, with a pair of screw-threaded studs protruding at standard spacing. This makes it simple to mount on any standard U-post. Just put the studs through the holes in the post, and secure a pair of nuts to the back. 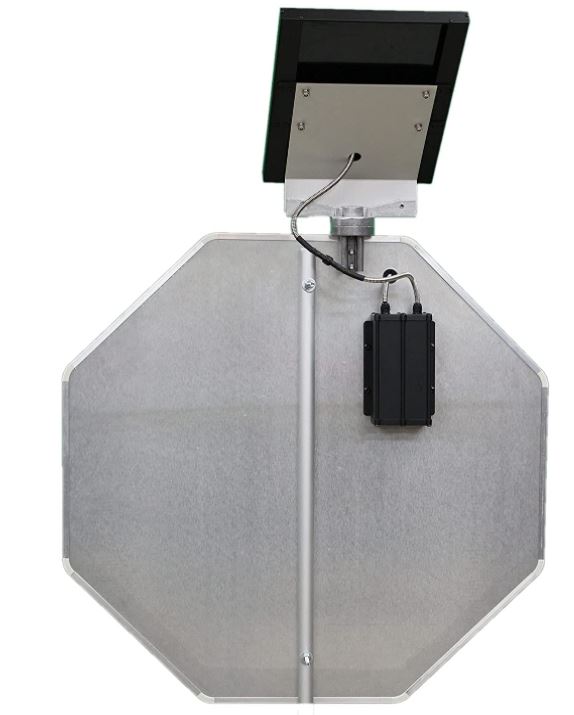 The front surface of the sign has a high-reflective coating. This alone would attract more attention than a sign with a matte finish. But there are also 8 bright red LEDs, one in each corner of the octagon. These provide an additional layer of visibility, especially when it’s dark out.

The Stop-Lite sign has a built-in light detector, which triggers the bulbs when it gets dark out. During daytime, they will turn off, in order to save power. At night, they emit a steady glow, cleanly outlining the sign and making it impossible to miss. 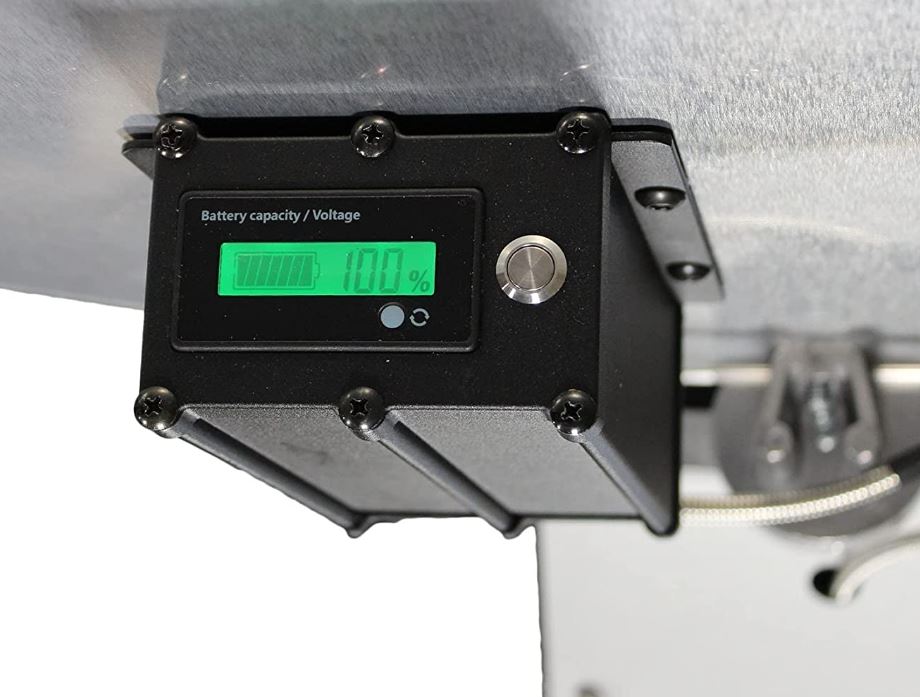 When the sign first arrives, the battery will have almost zero charge. That’s not a problem, though. As soon as sunlight hits the solar panel, it will immediately start charging. The panel produces enough power to fully charge the battery in around 6 to 8 hours. It’s significantly more effective on sunny days than it is on cloudy ones.

On a full charge, the battery will be able to run the lights for 36 to 48 hours without recharging. This will rarely be necessary, since it always charges during daytime. That said, it’s nice to know you have a reserve for cloudy days, when the solar panel is less efficient. 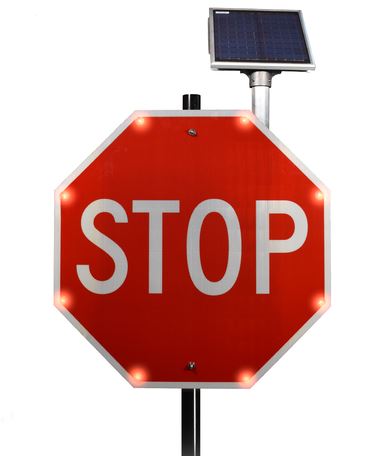 The Tapco BlinkerStop Solar Stop Sign also has a 30-inch diameter, and meets U.S.-standard specifications. This makes it suitable for use on public roadways as well as private property. The solar panel on top is very large, and mounts to a tall post on the right of the sign’s backside.

There are 8 blinking red LEDs, one located at each corner. These provide excellent visibility, and can be seen from 2 miles away in total darkness. Even in broad daylight, they draw a lot of attention to the sign. 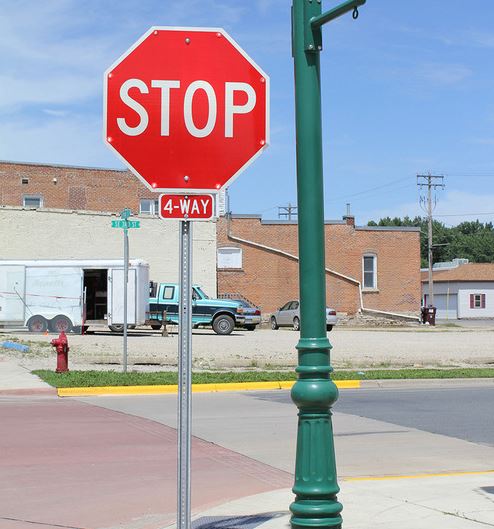 To augment this, the front surface is ultra-reflective, with a honeycomb-style reflective coating. This is an ultra-bright finish, both in sunlight and under headlights. On top of this, there’s an additional anti-graffiti coating. It’s similar to Teflon, so you can easily clean away paint, stickers, and other attempts at vandalism.

There are two holes punched through the BlinkerStop, one near the top and another near the bottom. These can be used to secure the sign to any pre-drilled post. Just use a pair of bolts and some matching nuts, and you’ll have it installed in no time. 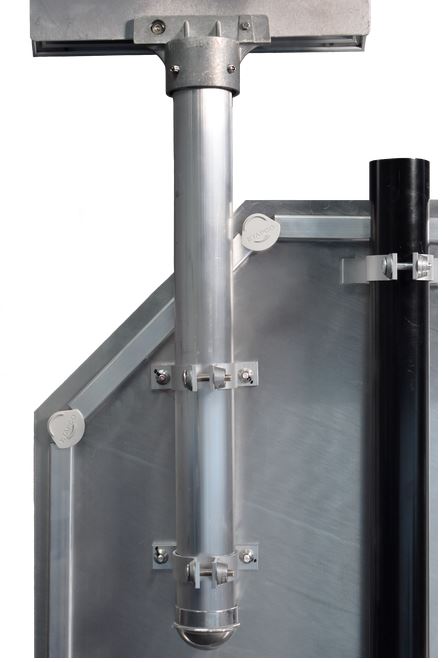 Tapco backs this sign with a 2-year manufacturer’s warranty. If the lights, panel, or batteries fail prematurely, you’ll get a free repair or replacement.

The Tapco BlinkerSTop sign is designed to run 24/7. Because the lights are so bright, they boost visibility by day and night alike. In fact, the sign actually has built-in dimming circuitry and a light sensor. At night, it turns down the brightness to preserve batteries, since less brightness is required. In the daytime, the lights receive more power. This allows them to be clearly visible even under bright sunlight. 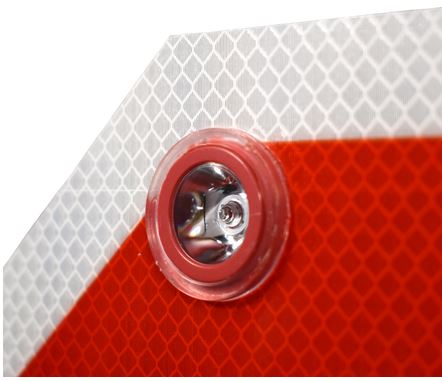 If this sounds like it draws a lot of power, it does. That’s why there’s such a large solar panel. Moreover, the battery pack has an impressive 28,000mAh capacity. That’s enough to run the light for 30 days without recharging. If you’re getting any kind of sunlight, the battery life will be effectively limitless. 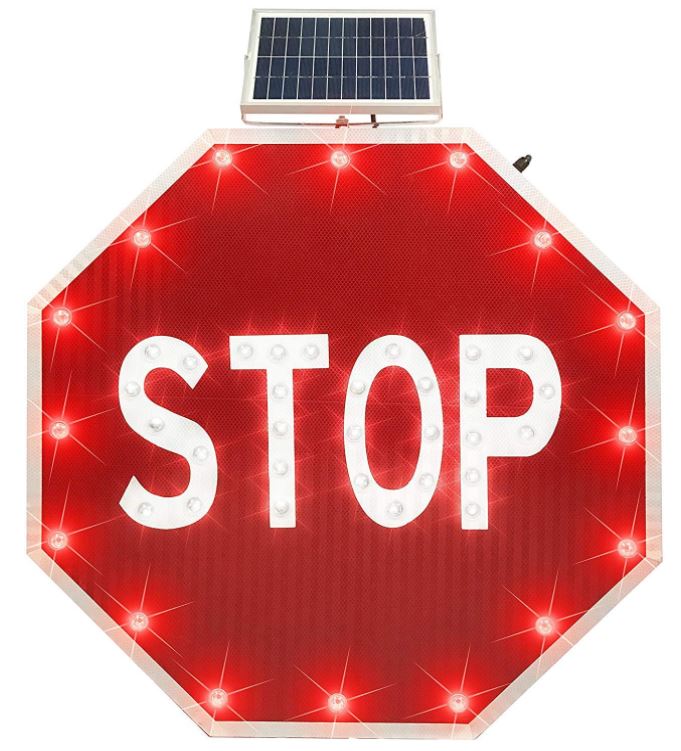 The Allexcent Blinking LED Solar Stop Sign is a bit smaller, at 24 inches in diameter. While it’s too small for public roads, it’s still just fine for use on private property. Not only that, but it’s very easy to mount. There’s a pair of U-shaped hoop mounts at the top and bottom, which easily secure to any post.

The thing that makes this light stand out is how many individual white LED bulbs there are. In addition to lights at each corner, there’s a light in the middle of each side. This gives you a total of 16 lights outlining the sign’s perimeter. If that’s not enough, the letters in the word “STOP” are filled in with 30 additional LEDs. The package also includes a set of replacement bulbs, so you can replace ones that have burned out.

Another thing we liked was the design of the 5-watt, 12-volt solar panel. The mounting bracket is hinged, so you can pitch the panel at any angle. If the sign is pointing north, for example, the panel can still have a southward pitch, to maximize sun exposure. 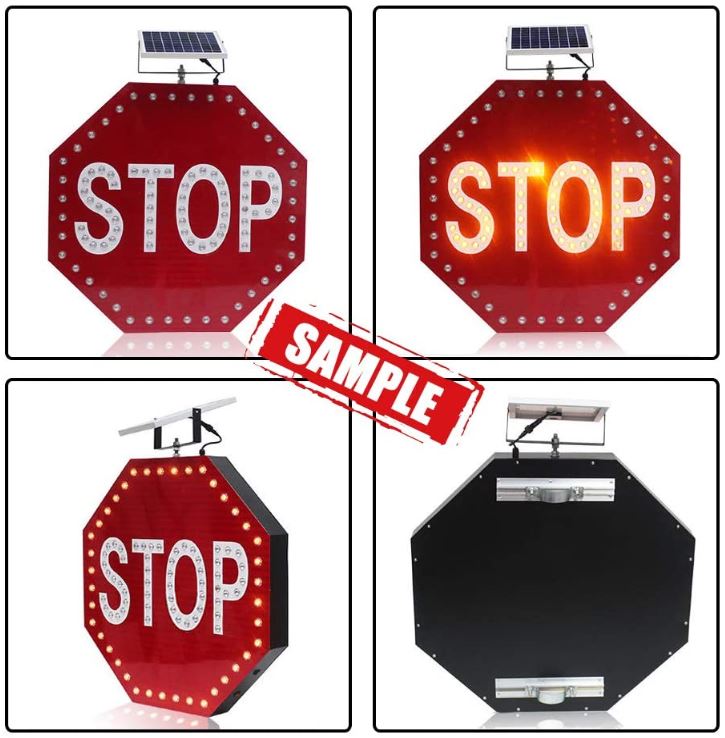 There are a couple of unique controls on the Allexcent sign. First off, you can adjust the flicker frequency between 40 and 60 times per minute. Second, you can use the power button to shut the lights off altogether. This is helpful for storage, so you don’t drain the battery pack.

When fully charged, the battery has enough power for five days. If you have a run of rainy, cloudy weather, you don’t have to worry that your sign will fail. At the same time, the battery has a duty cycle of 2 years. It’s not going to fail as soon as you’ve mounted the sign.

As you can see, these are all well-engineered signs. But which blinking LED stop sign is the right choice for your needs? Here’s what we’ve learned.

We began by looking at the Stop-Lite LED 30″ Solar Stop Sign. This sign is standard-sized, and comes ready to mount to any standard U-post. The LCD display lets you view the battery status at any time. Meanwhile, the power reserve is sufficient for most purposes, and the build itself is very sturdy.

The Tapco BlinkerStop Solar Stop Sign is also full-sized, but it works a bit differently. The 24/7 blinking pattern provides better visibility at all hours. This is important, since children are more likely to be present during the day.

The Allexcent Blinking LED Solar Stop Sign is too small for use on a public roadway. But it excels at customizability, with an adjustable blink frequency and an on/off button. It also has far more LED diodes than the others, so it’s extraordinarily easy to see.