Car radios have been around since the 1920s. In the early days, they were considered a luxury option. A radio could easily raise the cost of your car by 25 percent, which is hard to imagine today. But as technology got cheaper, radios quickly became standard on all automobiles. By the 1960s, you didn’t even have to ask. People just assumed that a new car came with an AM/FM radio. Further innovations included 8-Track players, cassette players, and CD players. Nowadays, you can buy cars with built-in satellite radio, and even play DVDs in the back seat. But even with all of those bells and whistles, the old-fashioned AM/FM radio still remains.

This has led to the creation of some interesting devices. For years, people have been using radio fobs to connect audio sources not already in their car. Didn’t have a CD player? Just plug your portable player into a radio fob and tune your car to the appropriate station. Suddenly, you could listen to CDs, and you could do it without upgrading your sound system. And since not all cars support Bluetooth, people are now doing the same thing. With an affordable transmitter, you can connect your phone wirelessly. This negates the need for a 3.5mm aux cord, or for an adapter cable for iPhones. 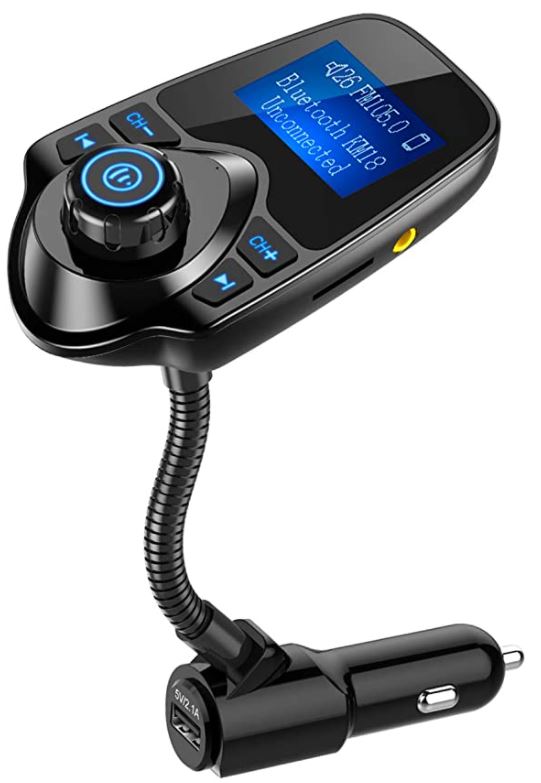 The Nulaxy KM18 Bluetooth FM Transmitter consists of an LCD display and controls, mounted on a gooseneck riser. The riser is only about three inches long, but it’s adjustable enough to point the screen in any direction. It’s also stiff enough that you don’t have to worry about it drooping over time. At the bottom, it connects to a plug, which you insert in your car’s power jack. This plug has a USB port on the back end, so you can still charge your phone while you’re using the transmitter. It’s a 5-volt, 2.1-amp connection, so you’re getting a little over 10 watts instead of a full 12 watts. That’s still more than enough to charge your phone, though. 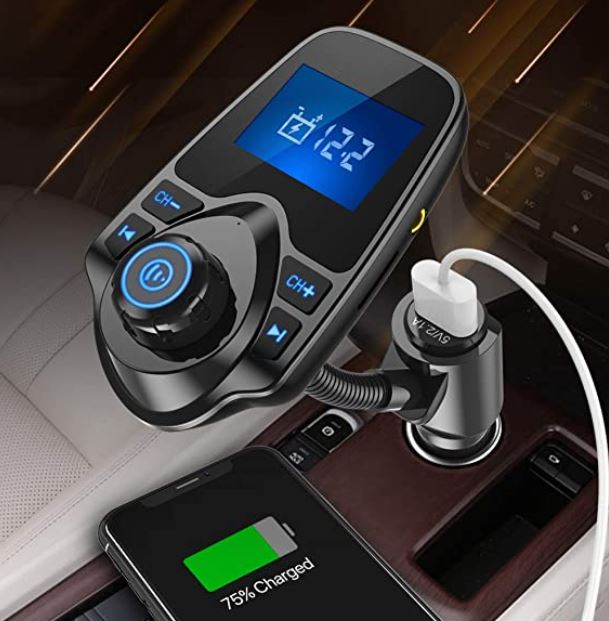 You can order the KM18 in six different colors, including glossy and matte blacks. This gives you a little bit of flexibility to match your transmitter to your car’s interior. The LCD display is fairly small, but it’s still easy to read. At any given time, the screen only shows a small amount of information. As you push buttons and move the dial, the screen will switch to showing the data you need. For example, when you go to adjust the radio station, the station number will be shown. By default, the screen will show your current audio source, and the name of the track that’s playing. 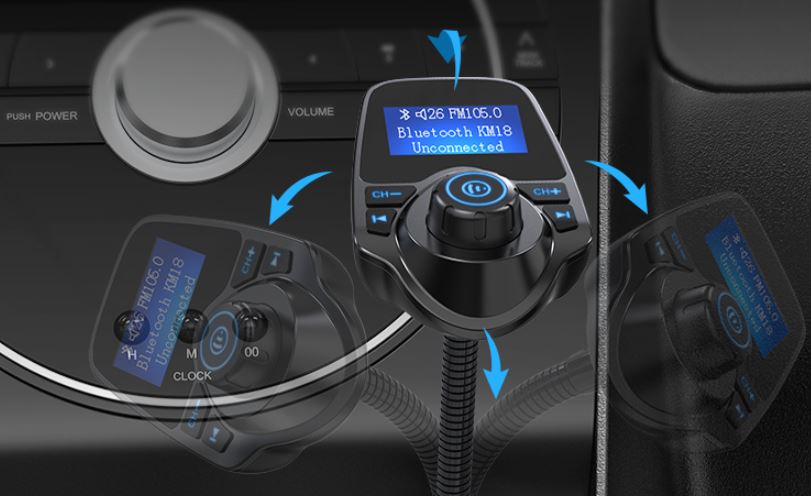 There are four buttons and a dial located beneath the screen. These are used to adjust the station, skip tracks, and choose your audio source. You can also initiate hands-free calling with a single tap. 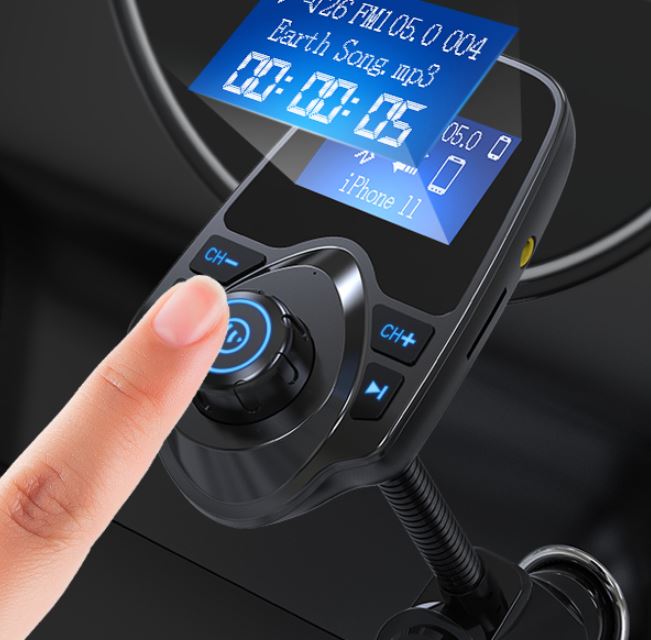 The Nulaxy KM11 supports Bluetooth 5.0 and lower wireless protocols. 5.0 is the current standard, used by most modern smartphones. As a result, you’ll be able to get the best possible connection with almost any phone. Bluetooth 5.0 provides for the lowest latency, highest audio bitrate, and most stable signal. That said, the KM11 will work with Bluetooth 4.2 and earlier should that be necessary. In addition to using Bluetooth, you’ll also have a couple of other options for playing music. You can plug into the transmitter with a 3.5mm aux cable, foregoing a wireless connection altogether. You can also play MP3 files directly from a Micro SD card.

The button on the back of the dial functions as a one-touch button for phone calls and your voice assistant. This makes it easy to access everything on your phone without needing to use your hands. Calls are clean and clear, without a lot of clutter and background noise. The audio quality is similarly good when you’re listening to music. This is because the KM11 has built-in noise-reduction circuitry to prevent interference. It keeps you from getting static as a result of the car radio’s grounding system. 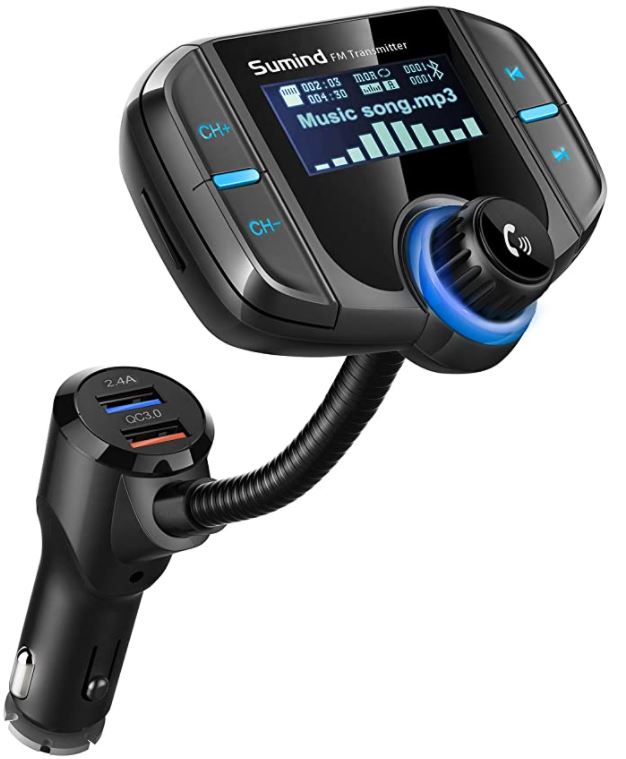 The Sumind Wireless Bluetooth FM Transmitter is superficially similar to the Nulaxy transmitter. It consists of a display and controls mounted on a gooseneck, attached to a plug. That said, there are several differences worth pointing out. To begin with, the plug has a built-in automotive fuse. If there’s a power surge, the fuse will blow rather than damaging your phone or the transmitter. Another important difference is that the back of the plug sports two USB ports instead of one. The top is a standard 12-watt port, but the bottom is a QC 3.0 port that provides up to 18 watts. As a result, you’ll be able to charge your iPhone at its maximum rate. For what it’s worth, you also get five color options instead of six. 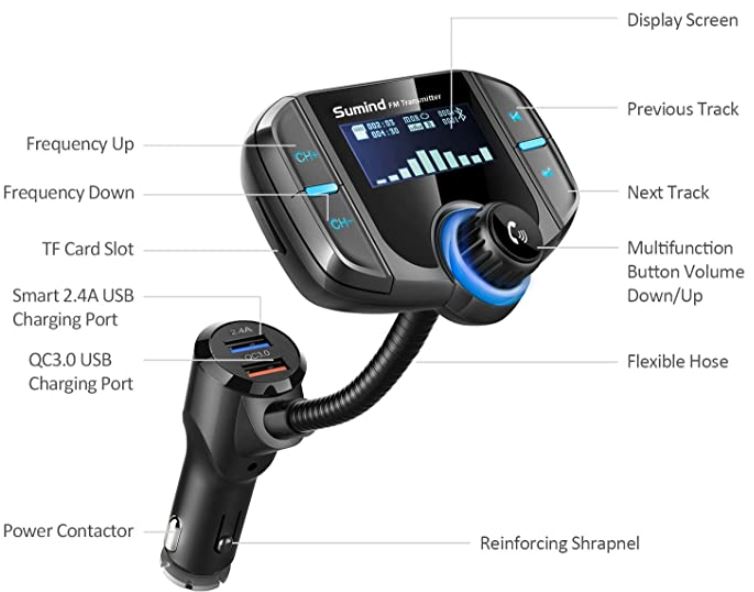 The display is a bit more detailed than the screen on the Nulaxy. It shows more information at once, with much of it spread across the top of the screen. This is possible in large part because the screen is a bit wider, so there’s more space. To the left, you’ll find the buttons for adjusting the radio frequency. To the right, another pair of buttons allows you to advance and reverse tracks. At the bottom, there’s a dial and a push-to-talk button, just like on the previous transmitter. Once again, there’s nothing terribly complicated, so you can learn how to use it in just a few minutes. 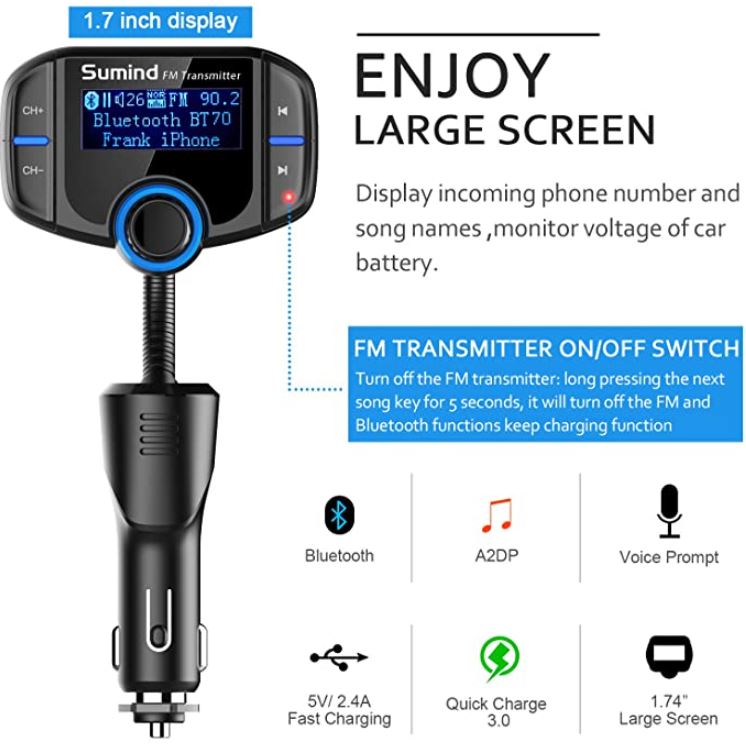 One disappointing feature of the Sumind transmitter is its Bluetooth 4.2 wireless connection. This is an older protocol, so you won’t get the maximum performance from modern devices. Most people won’t notice a difference. But if you’re an audiophile who likes high-bitrate music, you might notice a decrease in quality. That said, Bluetooth 4.2 does have one advantage over the newer 5.0 protocol. It has a longer range of 66 feet, instead of Bluetooth 5.0’s range of only 33 feet. 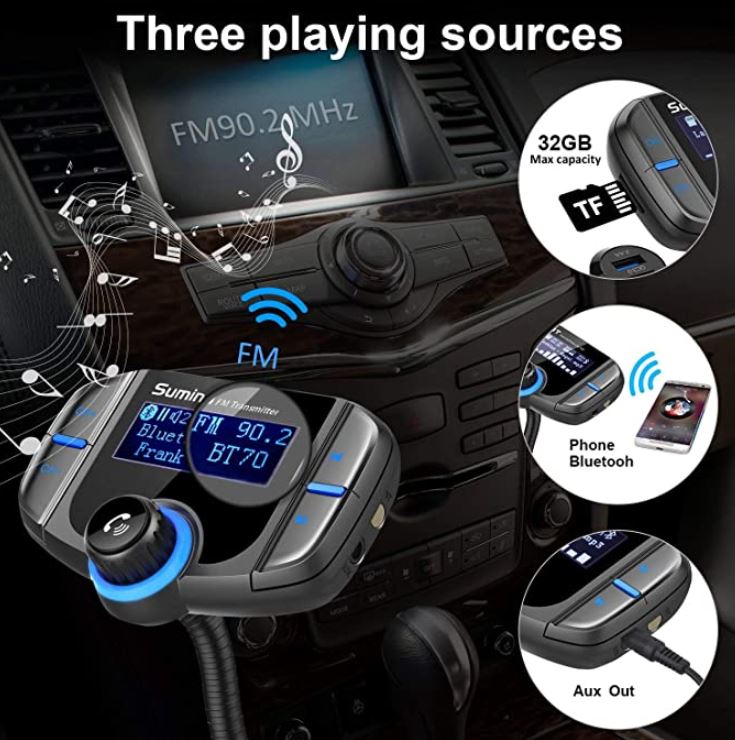 Like the Nulaxy, the Sumind transmitter can also be connected via a 3.5mm aux cable, and accepts Micro SD cards. However, it offers a bit wider compatibility with different audio formats. In addition to MP3s, you can also listen to songs that have been saved in the WMA format. This will be of little use to iPhone users. But the WMA format still has its place on other platforms.

One thing the Sumind transmitter does very well is voice calling. To begin with, it has its own built-in microphones. It doesn’t have to rely on your smartphone mic in order to pick up your voice. This gives you the freedom to keep your phone in your pocket, even when you’re making calls. Moreover, the mics are wired into a Qualcomm CVC 8.0 chipset. This technology analyzes the audio input and focuses on your voice. Then, it eliminates background noise like traffic and wind. It’s not 100 percent perfect, but it makes a major difference in how well the other person can hear you. You won’t have to shout to be heard, and they won’t have to struggle to hear you through the clutter. 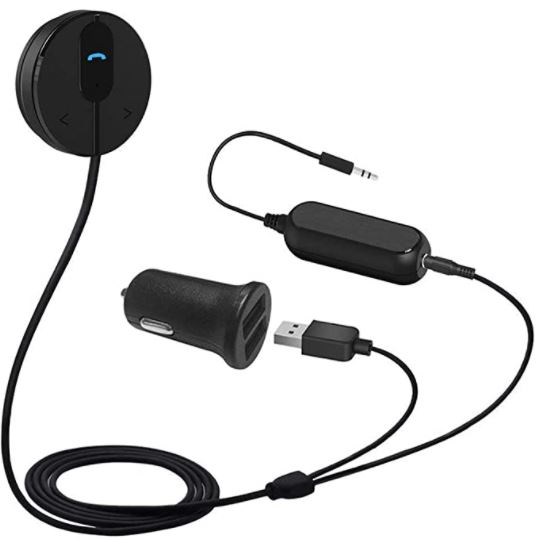 BESIGN is a manufacturer of automotive audio accessories, such as their ground loop noise isolator. It’s a bit different from the last two options because it doesn’t have an FM transmitter. It’s purely a Bluetooth interface for hands-free calling, and it connects into a 3.5mm aux port. As a result, it can still be used to connect to a car that doesn’t support Bluetooth. You’re just doing things a little differently. 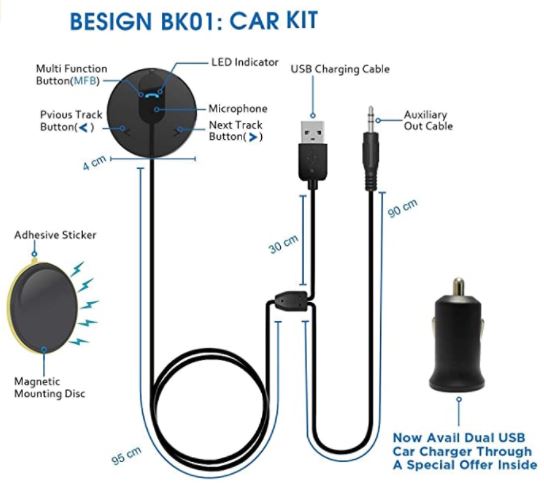 The main component of the BESIGN BK01 is a disc-shaped control surface that also contains the speaker and mics. It measures 1.57 inches in diameter, so it’s fairly compact. The back is magnetic for easy mounting, although the kit also includes a 3M adhesive for attaching to plastic. The front surface of the disc consists of a pair of buttons to either side. These are used for skipping audio tracks, and are easy to manage even when you’re looking at the road. The central button is used for making and answering phone calls. It’s also used for activating your phone’s voice assistant. 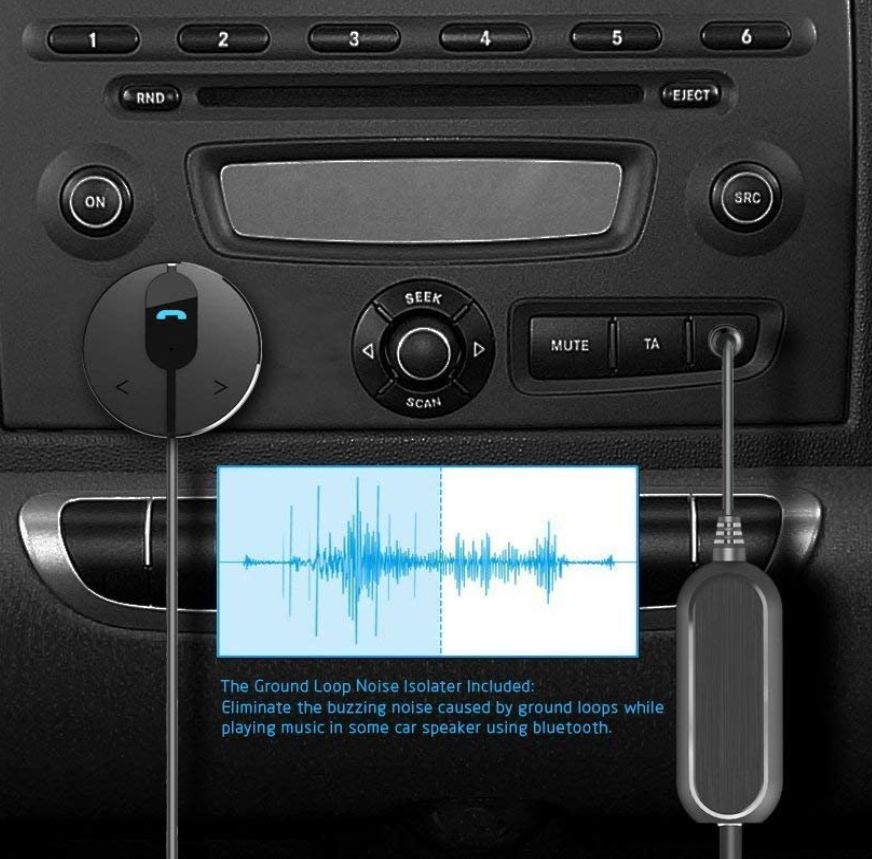 The one major downside of this design is that there’s no actual display. You can’t see what tracks are playing or any other information without picking up your phone. On the other hand, this won’t often be necessary, since you’re not adjusting any radio transmitter. Other than that, anything you really need to look at can wait until you’re stopped. 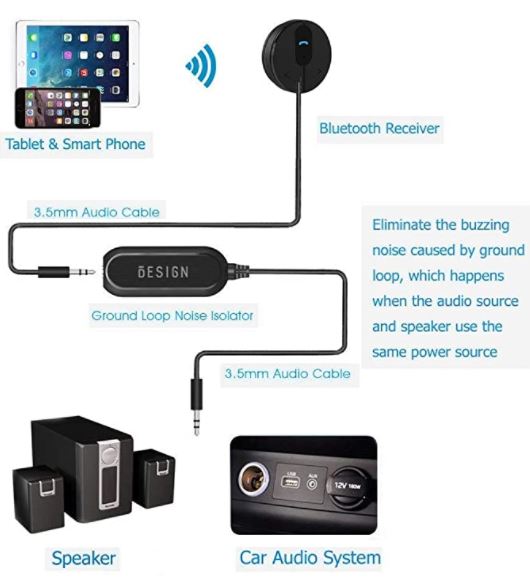 The connecting cable runs out the bottom of the main unit, and measures 37 inches in length. It ends at a splitter, which leads off into two smaller cables. The first is an 11.8-inch USB cord for providing power. The second is a longer, 35-inch 3.5mm aux cord for plugging into your car. The USB cord can be plugged into any USB power source. However, the kit comes with a dual charger for your power port. That way, you can plug in the BK01, and still have a second USB port for your phone.

The BESIGN BK01 connects your Bluetooth device to your car’s 3.5mm aux port. That’s it. There’s no SD card option, and no way to plug anything else into the control unit. The wireless connection is also an older Bluetooth 4.1 protocol. That said, audio quality and call quality are both surprisingly good. Remember how we mentioned that BESIGN is known for their ground loop isolators? Well, there’s one in the middle of the BK01’s 3.5mm aux cord. This cuts out static, and makes the audio sound as clear as if your source was hardwired. You’ll notice a big difference compared to non-isolated transmitters.

So, where does this leave us? Which Bluetooth transmitter is the right choice for you? We started out by looking at the Nulaxy KM18 Bluetooth FM Transmitter. This transmitter gives the best audio quality over the radio waves. Its noise-reduction circuitry makes a big difference here, and puts it a cut above the competition. The design is also nice and sturdy, with a gooseneck that’s neither too stiff nor too loose. Finally, the controls are easy to operate, so there’s not much of a learning curve.

The Sumind Wireless Bluetooth FM Transmitter is the best choice for hands-free calling. It has its own built-in mics, and the CVC 8.0 chipset removes most background noise. The QC 3.0 charging port is also a major plus, since you can charge at a full 18 watts. The only feature we didn’t like was the Bluetooth 4.2 connection, which is a bit dated.

The BESIGN BK01 Bluetooth Car Kit provides the best audio quality of all. The ground loop noise isolator goes a long way to eliminating the maximum amount of static. That said, this isn’t an FM transmitter. You need to plug it into your car’s 3.5mm aux jack. But as long as that’s not a problem, you’ll appreciate the performance.