A good flashlight can be an incredibly useful tool for a wide variety of jobs. But visible light won’t always be sufficient for the task. For example, some stains are invisible to the naked eye, but show up easily under UV light. If you’re a fan of police procedural shows, you’ve already seen this in action. But you can also use UV light as a tool for cleaning your own home. For example, dog and cat urine will show up under ultraviolet light even after it’s dried. This is great news if your animal peed on the carpet and you’re not sure which part to clean.

But that’s just one application of UV light. With the right intensity, it can even be used for sanitization, like with a UV water sterilizer. A flashlight won’t put out that kind of power, since it’s designed for illumination, which uses a different wavelength. But UV flashlights can still be used for cleaning kitchens and bathrooms. You can use them to look for hard-to-find pests like glow-in-the-dark scorpions. They can be used for locating certain types of minerals, which makes them essential for geology enthusiasts. And if you’re casting certain resins, the right bandwidth of UV light can be used to accelerate the setting process. 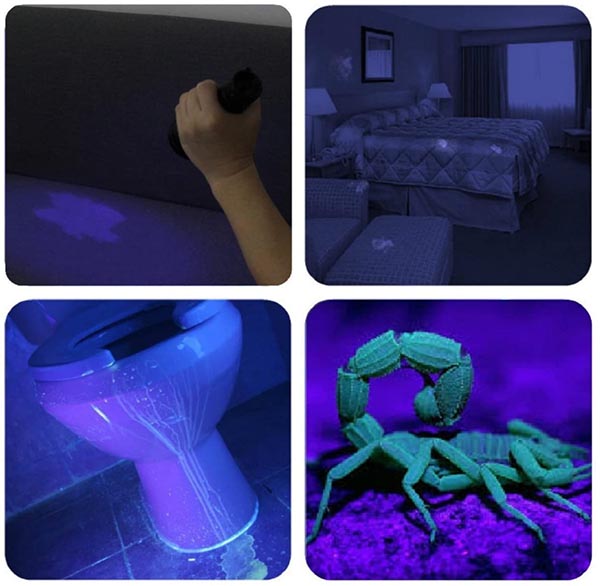 A UV flashlight can be used for many different purposes. One thing you won’t get is a ton of illumination. You’ll generally see some blue or violet light, but not enough to illuminate a large area. If you’re looking for pure illumination, there are better options, such as a magnetic LED work light. That said, there are some other features you should definitely be on the lookout for. Here are a few things to consider before you make your selection.

It goes without saying that you want your flashlight to stand the test of time. A lot of cheaper flashlights are made with a plastic housing, which can break easily. Plastic will also wear down quickly over time, shortening its lifespan. Instead, look for a well-engineered flashlight that’s made from anodized aluminum. Aluminum is almost as lightweight as plastic, but it’s significantly more durable. Aluminum is also corrosion-proof, which makes it superior to steel for water exposure.

The larger the flashlight, the more powerful it will tend to be. This isn’t a hard and fast rule. With modern LED technology, even a smaller light can put out a very strong beam. But in that case, you’ll be drawing a ton of power, which a small battery won’t support for long. A larger flashlight has room for more and larger batteries, as well as more LED emitters. On the other hand, a smaller flashlight takes up less space, and is easier to carry around. Depending on what you’re doing, a larger or smaller light might be ideal. The point is to think about your needs, and choose the right sized light accordingly.

UV light actually covers a fairly wide spectrum. Scientifically speaking, any light with a wavelength between 100nm and 400nm is considered “ultraviolet.” But this spectrum is divided in turn into three different categories. Light from 100 to 280nm is considered UVC, and is totally invisible to the human eye. These short wavelengths are highly energetic, and can kill viruses and bacteria. For example, UV sterilization wands use UVC wavelengths. UVB wavelengths fall between 280nm and 315nm, and are irrelevant to this discussion. UVA wavelengths fall between 315 and 400nm, and that’s what we’ll be looking for.

These longer UV wavelengths aren’t as energetic, and can’t be used for sterilization. However, they can react with fluorescent paints, animal urine, and other things you might want to see. Higher wavelengths, around 390 to 395nm, are ideal for testing currency and checking IDs. Slightly shorter wavelengths in the 365nm range are favored for finding minerals. These shorter wavelengths also have enough energy for curing resin, which is a highly desirable trait. That said, shorter wavelengths will also damage your eyes faster if you accidentally look into the bulb. Make sure to wear safety glasses, regardless of the type of UV wavelength. 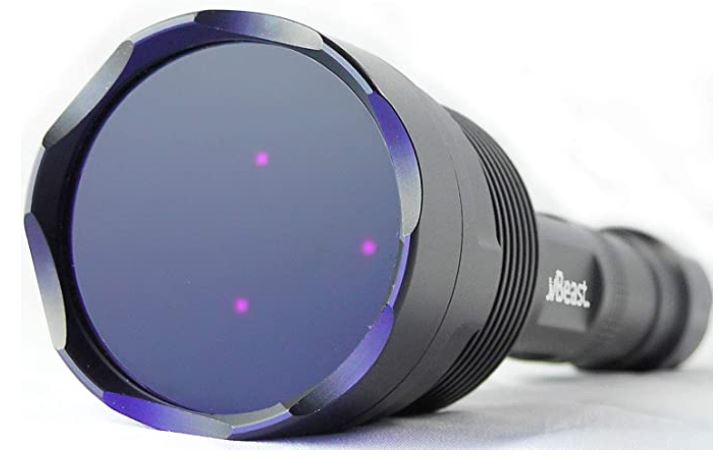 The uvBeast NEW V3 365nm Black Light UV Flashlight is a powerful, 365nm flashlight. It casts a beam further than 60 feet, which is probably more than you’ll ever need. The 365nm light is capable of lighting up most UV-responsive materials, more effectively than longer wavelengths. The light achieves this with the aid of a powerful lens filter, which eliminates most visible light. It’s impossible to eliminate all visible light, but the filter comes very close. All in all this is one of the more powerful UV lights on the market. It’s priced accordingly, but if you’re a professional who’s willing to pay for the best tools, it’s a solid choice. 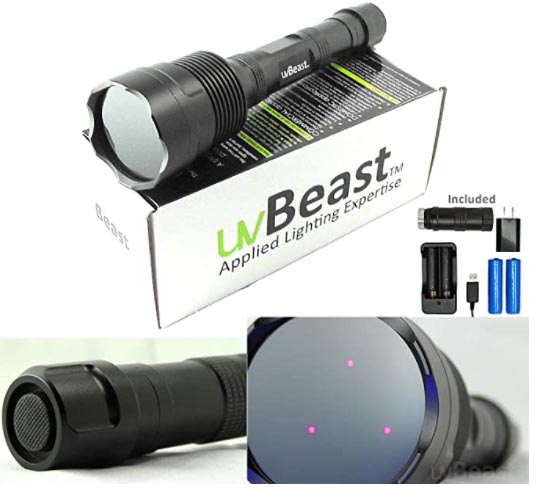 The housing is constructed from black anodized aluminum, and feels very durable. It’s small enough to carry in your pocket, with a lens housing that’s slightly larger than the main body. At the very front, there are a set of teeth around the lens, like on a tactical flashlight. This is mostly just for show, but we suppose you could use the light to break glass if you had to. The handle area is smooth and round, with two textured bands wrapping around it. In between the bands, there’s a flat surface, with a white “uvBeast” imprint. The power button is located on the back, and is made of springy rubber. It’s easy to operate with your thumb, and you can feel when the internal switch engages. 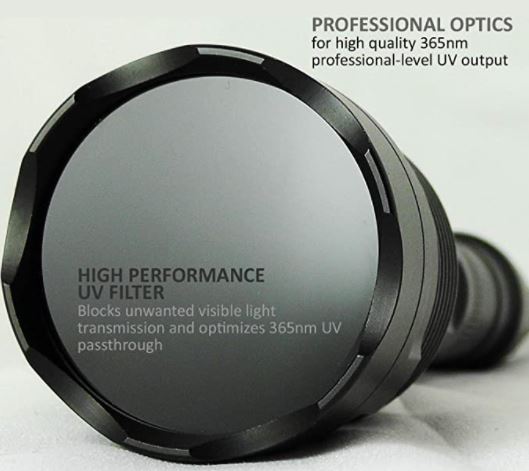 For power, this light relies on a pair of rechargeable 18650 batteries, with a capacity of 2,600mAh. The batteries come with the kit, as does a two-slot charger. The charger comes with its own USB cable and AC adapter, so you’re good to go from the very beginning. On a full charge, you’ll get about four hours of use, which isn’t half bad. That said, you can extend this to six hours by adding an additional battery. There’s a barrel extension in the package, which allows you to add a third battery with ease. However, you’ll have to supply your own battery. You also won’t be able to charge three batteries at once without an aftermarket charger. 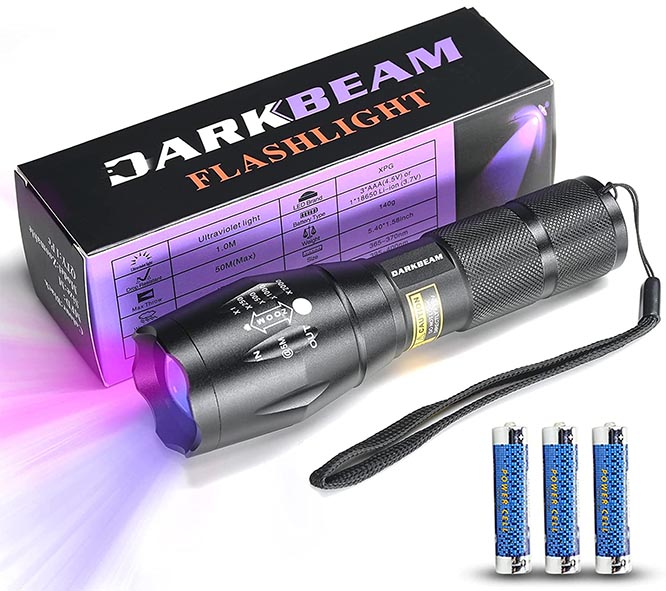 The DARKBEAM Blacklight Flashlight is another rugged aluminum flashlight with a black finish. It’s pocket-sized, only a few inches long, and it’s highly durable. This flashlight is shock-proof, drop-proof, and completely impervious to oxidation. It’s also IPX5-rated for water-resistance. This does not mean it can be submerged in water. However, it can easily stand up to rain, or even being washed off under the faucet. The front of the housing is slightly fattened around the lens. This portion can be pulled out to narrow the beam, or pushed in for a wider focus. It’s basically the difference between a smaller, more intense beam, or a wider, less intense one. 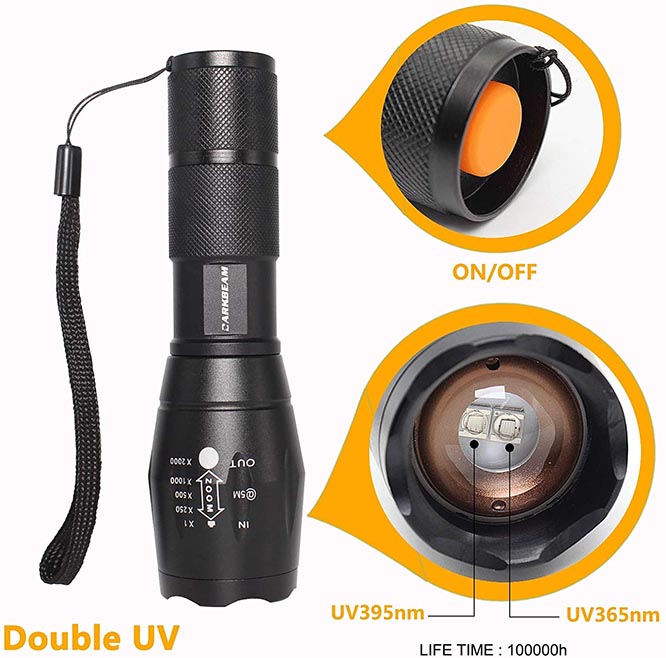 The thing that makes this flashlight stand out is that it uses not one, but two types of UV light. The first diode outputs 365nm light, while the second one shines at 395nm. This makes the DARKBEAM light capable of a wider variety of tasks than most flashlights. It’s great for jobs that require visibility, like looking for dog urine, or lighting up blacklight paint. However, it’s also useful for finding minerals, or even for curing resin. It’s not quite as powerful as the uvBeast light. But for the majority of jobs, you’ll find that it’s capable of the task. For what it’s worth, this light also gives off a fair bit of visual light. 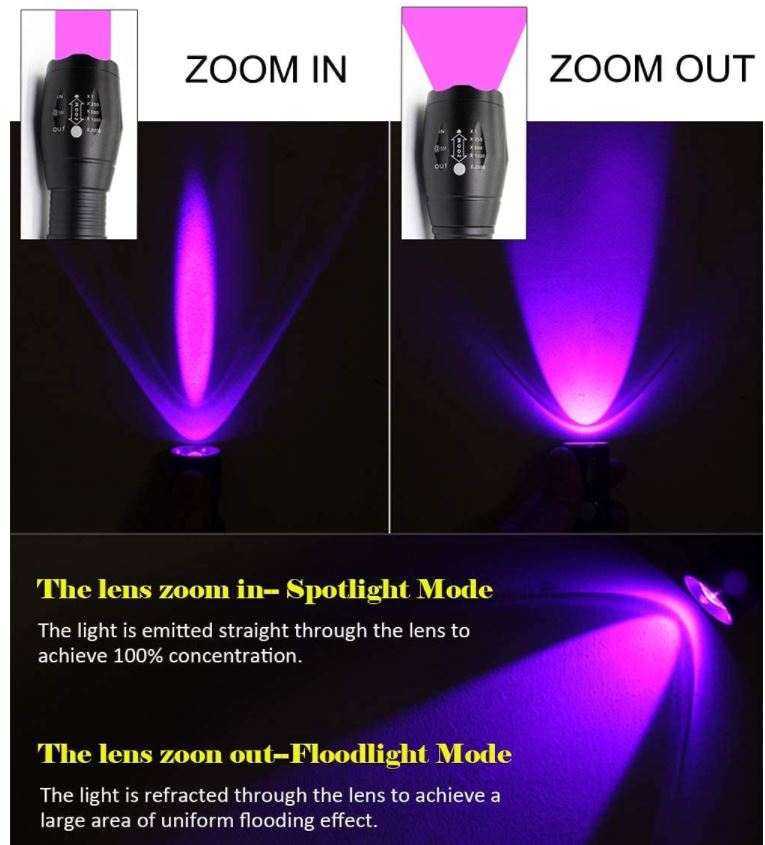 There are two different ways of powering the DARKBEAM light. By default, you would use the three AAA batteries, which are included in the box. These require you to use the adapter, then insert the loaded adapter into the flashlight tube. Alternatively, you can use an 18650 battery without the adapter. There’s none in the kit, but you can buy them at any vape shop. We should also point out that there are different DARKBEAM variants that have an internal rechargeable battery. These plug directly into a USB port for charging. However, there’s no focus adjustment, and they’re not dual-wavelength. You have to select either a 365nm or 395nm variant. 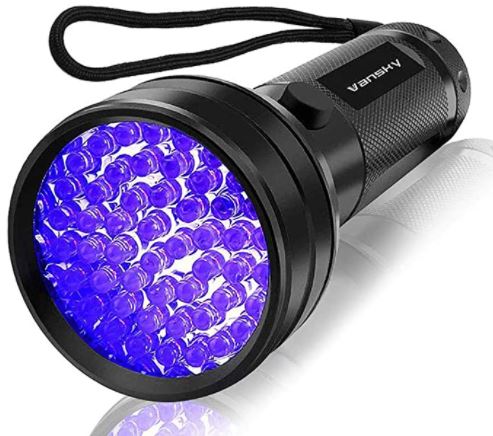 The Vansky 51 LED Blacklight Flashlight is also constructed from aluminum. It’s black and stubby, short enough to hold in the palm of your hands, with a wide, flared lens housing. This wide housing has 51 individual LED diodes inside, which produces a broad, soft light. This isn’t particularly well suited for casting a beam long distances. On the other hand, it’s perfect for short-range work, such as checking cash or IDs for legitimacy. This is borne out by Vansky’s choice of UV wavelength. The bulbs output 390nm light, which is ideal for tasks that don’t require a ton of intensity. 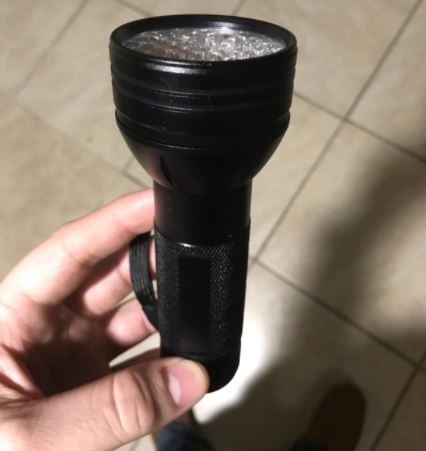 The Vansky light’s housing has a water-resistance rating of IPX4. This isn’t quite as powerful as IPX5, but it still represents a reasonable level of resistance. It’s easy to wash off this flashlight, and a little rain won’t hurt it. Not only that, but the high-quality aluminum won’t corrode due to damp conditions. 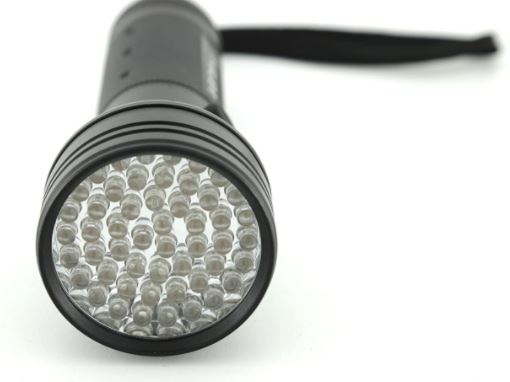 For power, this flashlight uses a trio of AA batteries. They’re not included in the kit, but that’s not really a big deal. Considering the fact that you can buy them at any corner store or gas station, we weren’t upset. Once you’ve got your batteries loaded, you can expect around 4-6 hours of operation. That’s more than enough to get you through almost any task.

So, which one of these UV blacklight flashlights is the best choice for you? Let’s go over what we’ve learned. We started out by reviewing the uvBeast NEW V3 365nm Black Light UV Flashlight. This is undoubtedly the most powerful of the three, with a strong, 60-foot beam. It also has the most intense UV light, with a filtered 365nm wavelength. On the other hand, it’s a bit pricey. If you’re not looking for a powerful light that can dry resin, you might not need this much power.

The DARKBEAM Blacklight Flashlight has a dual-wavelength design that makes it highly versatile. With an adjustable focus, you can have either a narrow or a wide beam. You can also choose to use disposable AAA batteries, or opt for a rechargeable 18650 instead. Add to that a waterproof housing, and you’re looking at a solid light.

Last, we looked at the Vansky 51 LED Blacklight Flashlight. This light isn’t quite as powerful and lacks 365nm UV waves altogether. That said, it’s easy to use, and it’s great for jobs like checking hand stamps, which doesn’t require intense light. It’s an excellent choice if you want a quality UV flashlight that doesn’t break the bank.