The shift from old-school SD displays to HD didn’t just involve a change in display technology. It also required new cable technology. Traditional composite cables just don’t have the bandwidth to handle a high-definition signal, so HDMI was invented. For a while, TVs would have both types of inputs. But if you’re using a TV that was made in the last several years, it probably lacks a composite input.

For modern devices, this isn’t really an issue. Any video player or game console will have an HDMI port. Unfortunately, you won’t be able to connect any older devices. If you have a PlayStation 2, original Xbox, or VCR, it won’t plug directly into your TV. Thankfully, a composite to HDMI converter can bridge the gap between your old device and your new TV.

Today, we’re going to review five of the best RCA to HDMI converters we could get our hands on. There’s a lot to go over, so here’s a quick overview:

Of course, there are many features that go into a good RCA to HDMI converter. Let’s take a closer look at all five, and see how they stack up! 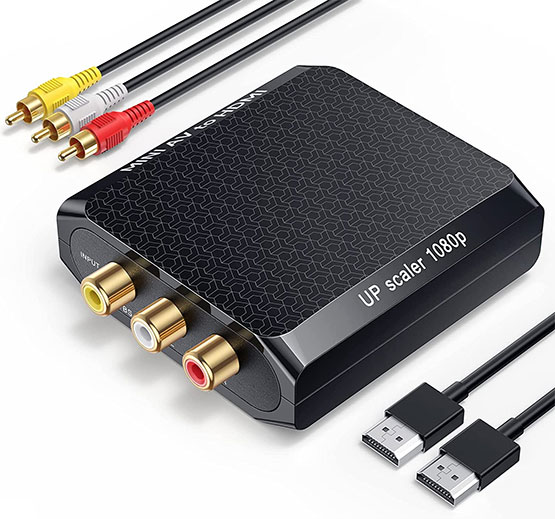 The Wenter RCA to HDMI Converter is a black plastic box that measures 2.6 inches wide and 3 inches long. It’s more or less rectangular, although the sides are beveled at the corners to provide a sleeker profile. There’s a geometric pattern printed on the top, with the words “Mini AV to HDMI UP Scaler 1080p.” If you store it in a box with a bunch of cables and adapters, you won’t forget what it’s for. 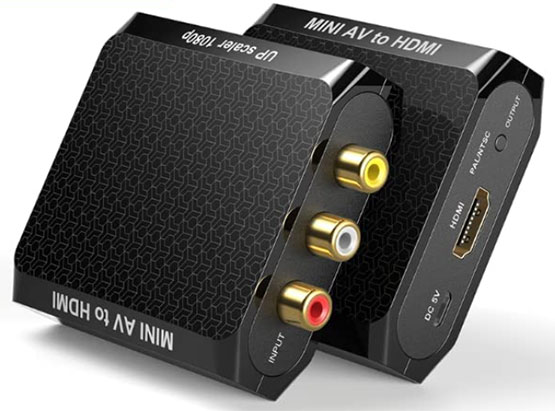 At one end, you’ll see the RCA inputs. These are the yellow, white, and red barrel-shaped ports. At the other end is the HDMI output port. All of these ports have gold-plated contacts, which provide a clean, stable signal with near-zero interference. There’s also a Micro USB power input on the end with the HDMI port.

The kit includes everything you need to connect your devices. Not only is there a Micro USB power cable, but you also get RCA and HDMI cables. All you’ll need is a USB power supply to plug the power cable into. But you can opt to simply plug it into your TV’s USB port. 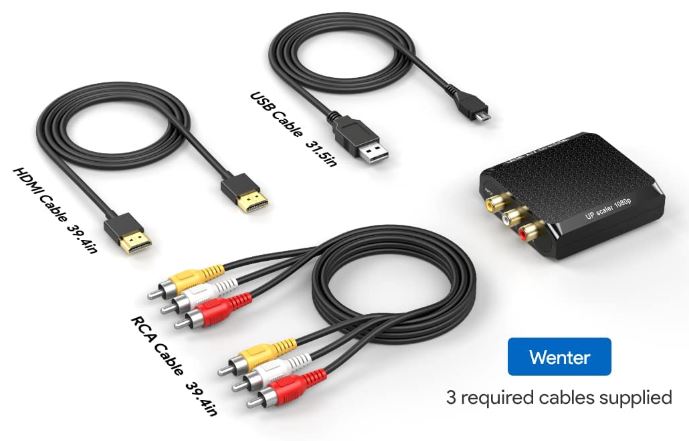 On the side of the converter, you’ll notice a little black slider switch. This switch is used to select 720p or 1080p video output. It works best when you match it to your display type. So, for example, if you’re using a 720p projector, it’s best to use 720p. For your 1080p or 4K TV, you’d want to use 1080p. Regardless of the resolution, video outputs at a framerate of 60Hz. 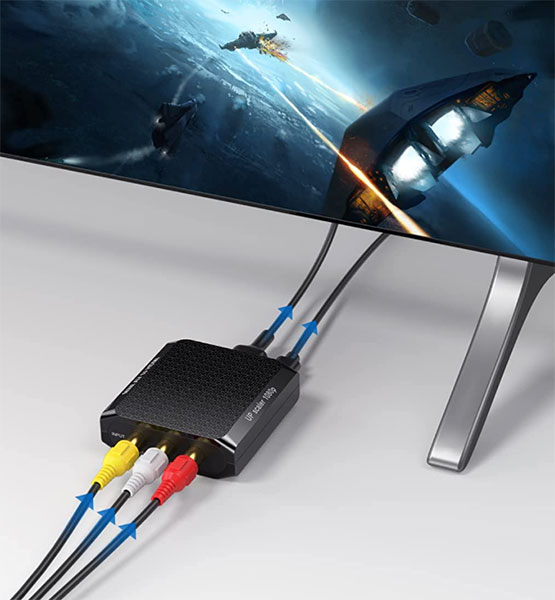 One thing it’s important to point out is that the Wenter converter outputs in 16:9 format only. 4:3 videos will be stretched to fit the screen. This may or may not be an issue. Many TVs and projectors have a setting that can compensate for this. And if you’re playing a DVD with 16:9 video, it won’t be a problem at all.

This converter supports all common TV formats. You get support for NTSC versions 3.58 and 4.43, PAL, PAL/M, PAL/N, and SECAM. If you want to play a Japanese PlayStation 2 console in the US, you can. You also get an 18-month manufacturer’s warranty that covers any defects in parts or labor. 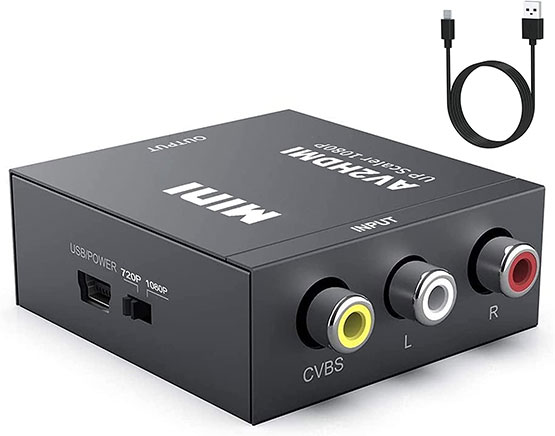 The UPGROW RCA to HDMI Converter is about as small as these converters get. The black housing is 2.6 inches wide and 2.1 inches long, with a thickness of only 0.8-inch. It’s also lightweight, at a mere 3 ounces. That’s light enough to dangle behind your TV without putting stress on any cables. Even so, you’re looking at a durable little device – the housing is constructed from anodized aluminum. 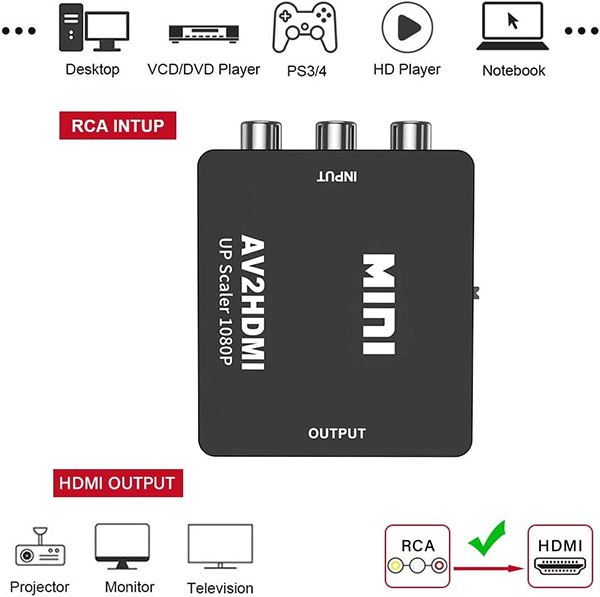 The design is pretty much what you might expect. On one end, you’ll find a set of red, white, and yellow RCA input ports. On the other end is an HDMI output for your display. The Micro USB power port is located on the side of the housing. A USB to Micro USB cable is included in the package.

Next to the power port is the selector switch for choosing between 720p and 1080p outputs. As before, it’s best to use the highest resolution that’s compatible with your display. There are also helpful “Input” and “Output” labels on top of the housing. This might seem like a silly feature, but it can be helpful in the future. It makes it easy to identify exactly which way the converter operates.

One thing we liked about the UPGROW converter is that it outputs video in a 4:3 aspect ratio. The vast majority of old games and SD video recordings are recorded in this ratio. If your TV or projector settings are right, the image will display as intended, with black bars on either side. Just make sure your display is capable of reproducing a 4:3 video. Otherwise, it might stretch the video out to fill the whole screen and distort all your video. 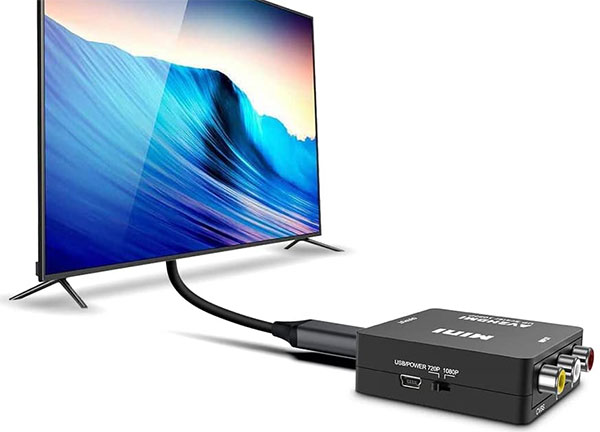 The signal isn’t quite as clear as the Wenter converter. However, you do get the benefit of noise-reduction circuitry. This produces cleaner edges and reduces the aliasing you’ll often get from converters. Your old VHS tapes won’t look like HD, but they’ll look as good as they ever did on your CRT TV.

As for video format, you shouldn’t have any issues. This converter supports NTSC, PAL, SECAM, PAL/M, and PAL/N devices. No matter where your game console or VCR was purchased, it will work just fine. 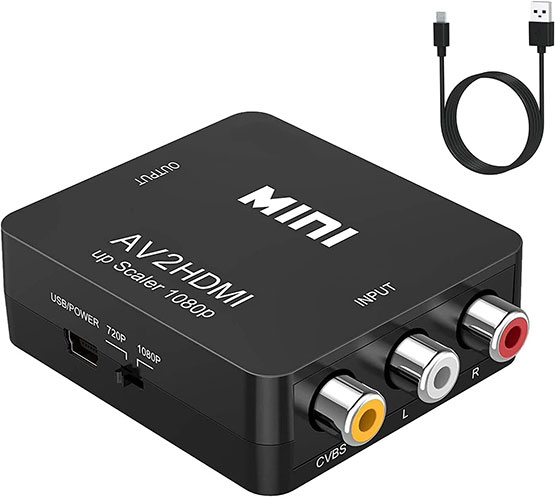 The ABLEWE RCA to HDMI Converter is made from black or white plastic, and has a small rectangular housing. It measures 2.09 inches wide, 2.68 inches deep, and only 0.79-inch thick. The plastic seems reasonably durable, and the corners are rounded off for improved rigidity. 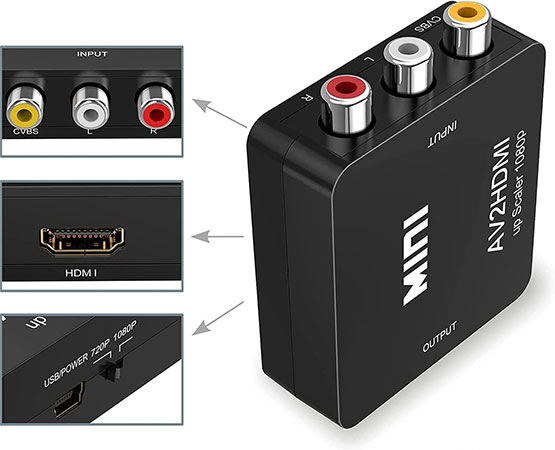 The RCA inputs are located at one end, with an HDMI port at the other. Both ends are labeled “Input” and “Output” respectively for ease of identification. As with all RCA to HDMI converters, you’ll need a power supply. This comes via a Micro USB power port in the side of the housing. A cable is included in the package, so all you need is a powered USB port or charging adapter. 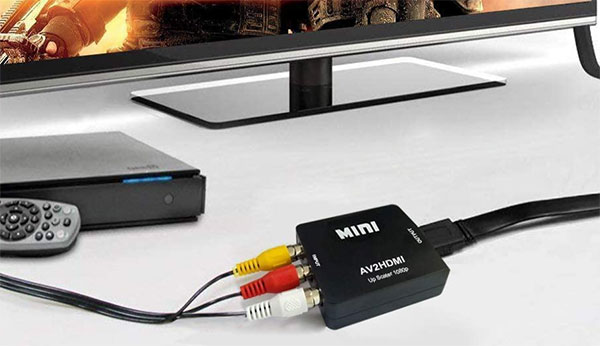 Next to the power port is the 720p/1080p selector switch. Both resolutions output at 60Hz, which is good news for modern displays. Quality is generally good across the board, although at the end of the day you’re looking at a more affordable converter.

Like many converters, this one outputs all video with a 16:9 aspect ratio. As a result, your old 4:3 videos and games may appear stretched. Most TVs will have an option to correct for this. But it’s best to make sure yours does before you try.

The first thing you’ll notice about the TaiHui HDMI to RCA converter is that it’s backwards. Instead of converting a signal from RCA to HDMI, it converts from HDMI to RCA. This allows you to use your newer devices with an older display. For example, you could play your new Xbox or PlayStation on an old 480p projector. 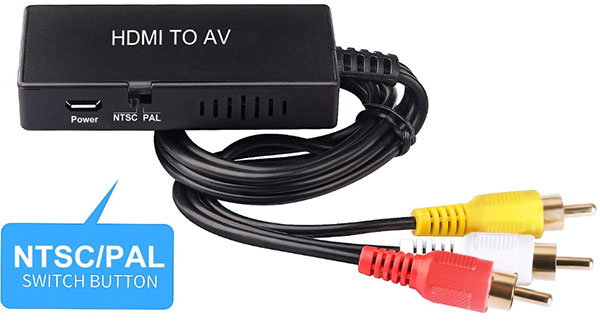 The housing is made from a matte black plastic that doesn’t collect dust and fingerprints. It measures 2.75 inches long, 1.5 inches wide, and just 0.9-inch thick. It’s mostly rectangular, with a slight curve to the top surface. At one end is the HDMI input port. At the other is a short pigtail cord with red, white, and yellow RCA plugs. 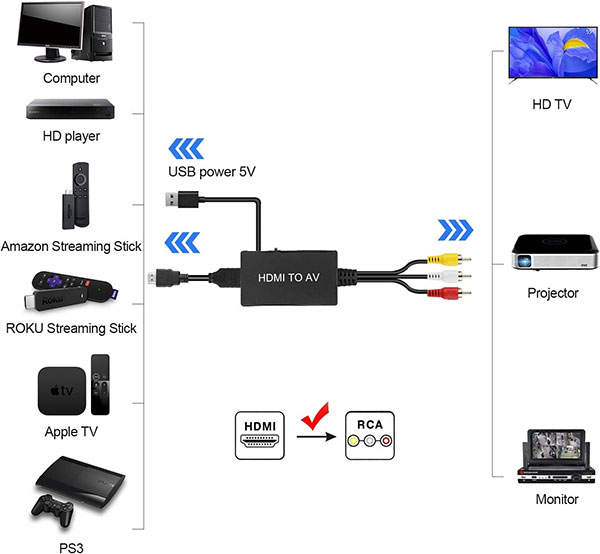 The Micro USB power supply port is located on one side of the housing, and a power cable is included. There’s no resolution switch – it simply works with any resolution from 480i to 1080p. Instead, you’ll find a selector switch for choosing between PAL and NTSC formats. You can use this to connect video sources from other regions that otherwise wouldn’t work with your TV.

One thing to be aware of is that the aspect ratio doesn’t change. If you’re converting a 16:9 video, it will come out in 16:9. On many older displays, you won’t have a way to compensate for this. 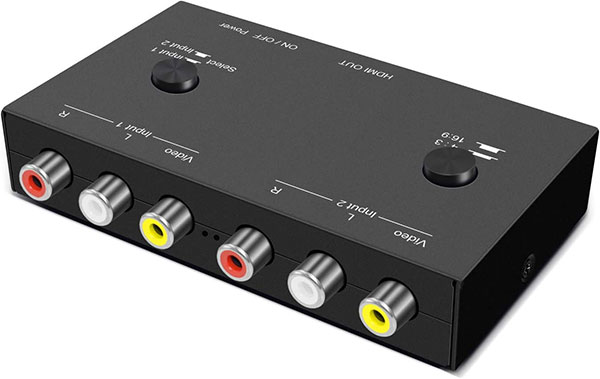 The RuiPuo Dual RCA to HDMI Converter is larger than the others. The black aluminum housing measures 4.1 inches wide, 2.4 inches long, and 0.78-inch thick. It also weighs 9.9 ounces, so it will have to sit on a surface, not hang. 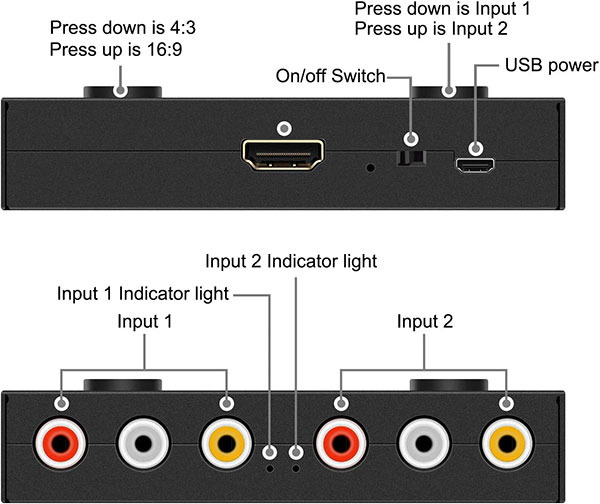 On the front of the housing, you’ll find six RCA input jacks, for a total of two sets. This allows you to connect two devices simultaneously. For example, you could plug in a PlayStation 2 and a VCR. The HDMI port is located on the back of the housing, along with the Micro USB power port. A Micro USB charging cable is included in the package. 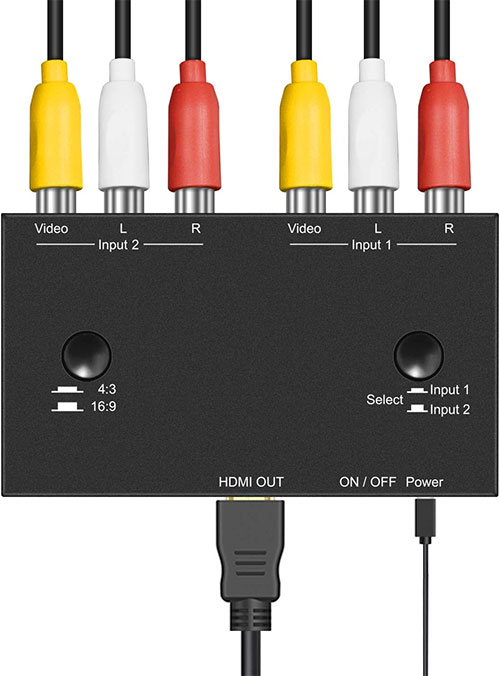 You’ll notice a pair of anodized aluminum buttons on top of the housing. The one on the left toggles between the two inputs. The one on the right is used to switch between 16:9 and 4:3 output aspect ratios. This makes it compatible with pretty much any TV. Even if your TV struggles with one or the other aspect ratio, you’ll be able to make things work.

These are all great RCA to HDMI converters. But which one is the optimal choice? Here’s what we’ve discovered.

We began by looking at the Wenter RCA to HDMI Converter. This converter provides a strong, stable signal, with gold-plated contacts that help prevent static. It outputs in 1080p or 720p, and stretches 4:3 video to fit a 16:9 display. If you want the most stable signal, this is the converter for you.

Next up was the UPGROW RCA to HDMI Converter. This converter doesn’t have quite as stable of a signal, but it does have great anti-noise circuitry. It also outputs 4:3 video, which means it won’t distort your old games and movies.

After that, we checked out the ABLEWE RCA to HDMI Converter. This converter is similar to the Wenter converter in most respects. It doesn’t have the gold-plated contacts, but the power input is located on the side instead of the back. It’s also available in white if you prefer to match all your electronics.

The TaiHui HDMI to RCA Converter is the oddball of the bunch. It converts from HDMI to RCA instead of the other way around. This makes it the perfect choice for connecting modern video sources to older displays. It’s also easy to set up, with a pigtail that plugs right into your TV’s RCA ports.

Finally, we reviewed the RuiPuo Dual RCA to HDMI Converter. This dual-port converter accepts to inputs, and allows you to switch freely between them. You can also change between 16:9 and 4:3 outputs by pressing a button.