Many of the older audio and video formats are dying out. You may have noticed VGA cables becoming less common by the year. Even digital visual interface (DVI) cables are starting to thin out. For the time being, DVI remains one of the last standard monitor cables, and continues to be widely manufactured on a variety of monitors and graphics cards.

But encroaching formats like DisplayPort and HDMI are too simply too ubiquitous. They do everything these other formats do, and then some. It seems we’re moving closer and closer to a world where only one or two types of wires exist. But until such a time occurs, millions of people will find themselves in a pretty tough situation. How do you choose an HDMI to DVI adapter cable?

Fortunately, finding an HDMI to DVI adapter isn’t excessively complicated. You’ll need to know the specific type of DVI and HDMI connections you want to use. You’ll have to think about compatibility issues, and deal with basic quality concerns. The build quality of the cable matters more under certain conditions, like if you plan on using the adapter for several years. But in the very least, you should be confident your adapter isn’t going to fall apart on you.

One of the thing that makes the HDMI format so popular is how much it’s capable of doing. HDMI can handle Ethernet connections, video data, audio data, 3D content, and about a dozen other features you probably don’t even think about. By contrast, DVI cables are basically only good for carrying video. And when you’re adapting between DVI to HDMI, you’re not going to be able to use features supported by only one of those two formats.

When you run your DVI or HDMI cables excessively lengthy distances, you end up with signal problems. With respect to signal degradation, these formats aren’t as bad as many older analog AV cables, but they still suffer from especially long journeys. If you don’ t actually need 15 feet of cable, don’t leap to choosing a 15-foot adapter. And try to stay within 15-feet, which is the maximum recommended length for DVI content.

Sometimes you actually do need some distance between the things you’re trying to connect. If you’re trying to pair a DVI laptop to an HDMI monitor, you’ll probably want more than 2-inches of cabling to make the connection. It’s something to think about, depending on the devices you plan on using.

On a fully loaded HDMI cable, there are 18-pins. Each pin helps chip-in to provide the bandwidth necessary to carry SDTV, HDTV, 4K content, and so forth. Among HDMI cables, there’s also a variety of connection types. The standard type is the one we all know and love, and dual-link HDMI is the version that’s substantially wider, with several more pins. The mini version is slightly smaller than standard, and the micro format is one size smaller than that.

DVI comes in a variety of configurations. DVI-I is the integrated variety, supporting digital and analog connections on the same connection. DVI-D is the digital only variety. DVI-A is the analog only variety. These differences matter because not only do they change the supported content, they reflect differences in the physical plug as well. DVI-D uses a distinct set of pins compared to DVI-A and others.

Choosing the wrong adapter, or a cheap adapter, can quickly drop your video quality. Often times, this occurs in seemingly small quantities that many people do not even notice. From a physical standpoint, making a secure fit between the adapter and your electronics is at least half of the total problem. But you also want to ensure that firm connection can last with the help of quality construction.

Do you want your adapter to last longer than a year or two? Adapters carrying your signal have plenty of chances to drop bits of information. Corrosion on a cable, from water or humid environments, can gradually make your connections worse and worse.

Avoiding corrosion is usually as simple as opting for gold-plated adapter cables. You also want to pay attention to the protections around the cable. Is it a braided fiber cable? Do they use extra layers of shielding? How thick is the cord itself? 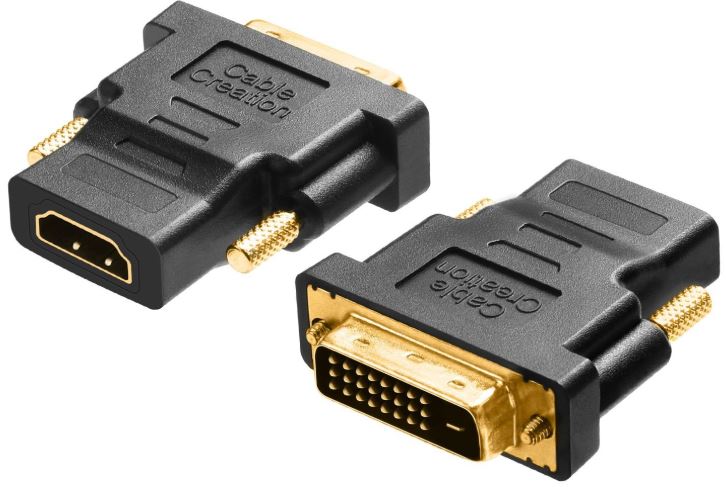 The CableCreation Gold-Plated DVI to HDMI adapter is a bi-directional adapter, which can convert from HDMI to DVI, or DVI to HDMI. It supports flawless transmission of 1080p HD content, but as you would expect, audio content needs to be transmitted separately. This adapter actually provides zero cabling between each connection, making it highly portable, and highly adaptable to your existing equipment. 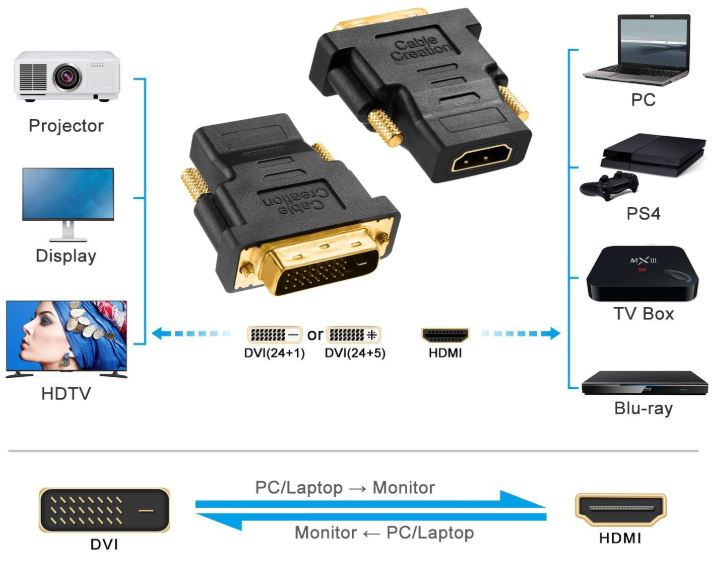 Each end of the adapter is plated with gold, protecting the adapter from corrosion. This is particularly important in the female HDMI portion of this adapter, which is constructed with a recessed cubby which might otherwise be vulnerable to corrosion.

On each end of the adapter, you’ll find two texturized thumb screws you can use to tighten the connection on the adapter. This keeps your cables from being yanked out. The gold threads you roll to tighten the connection have such large texturized bumps, there’s no risk of them wearing out over time. However, these tightening threads are somewhat small compared to most adapters.

The body of the CableCreation DVI to HDMI adapter is composed of PVC molding, and designed with a variety of anti-skid grip spacing placed along the body. This allows you to take a firm grip and pull the adapter in and out. The DVI connection is a standard 24+1 and 24+5 connection, suitable for ordinary graphics cards. Likewise, the HDMI port is constructed to standard dimensions.

This is a cordless, highly minimalistic adapter. It’s great for carrying with you, or quickly adapting a cable you’ve got laying around. But the lack of cabling might also be a detriment, depending on what you’re trying to connect, and if you already have cabling or to adapt or not.

One more thing to notice is how this is actually a 2-pack of adapters. That means you’re able to adapt two separate cables or devices with an adapter, with a cost that’s still less than most single-device adapters. If you can actually make use of the additional HDMI to DVI adapter, the value is nothing short of ridiculous.

The BlueRigger HDMI Input to DVI Adapter Cable provides everything you might expect from the BlueRigger brand. The construction is visibly sturdy and clean. More importantly, this adapter provides cabling, which is available in a huge variety of different lengths. These cable adapters are ideal for setting up a home theater, HDTV, or monitor. 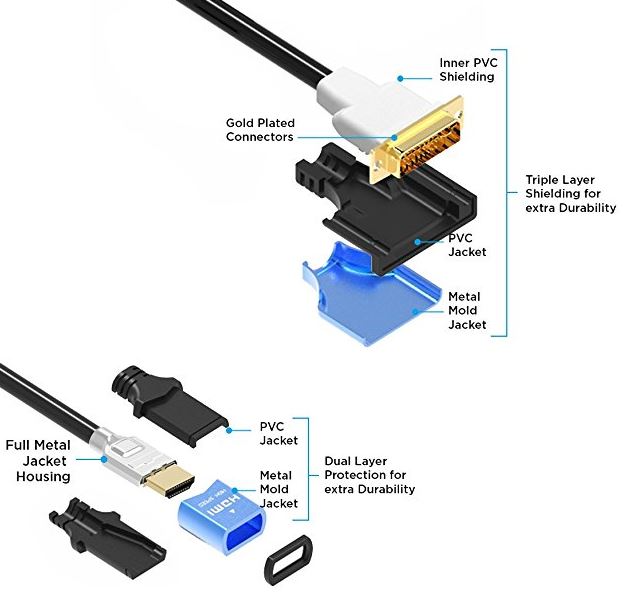 BlueRigger offers their adapter cable in 3, 6, 10, 15, 25, and 35-feet. In each case, the cable uses the same gold-plated connectors, providing excellent signal conductivity and protection from corrosion. On the outside of the cable, a thick CL2 jacket provides additional protection to your signals. That CL2 rating specifies this cable is suitable for the wear-and-tear of a residential building.

It’s worth noticing the DVI end of the cable can be secured with two threaded thumb screws. And those screws are simple to tighten thanks to the use of extra-large plastic threads. They’re virtually twice as large as those offered by CableCreation. 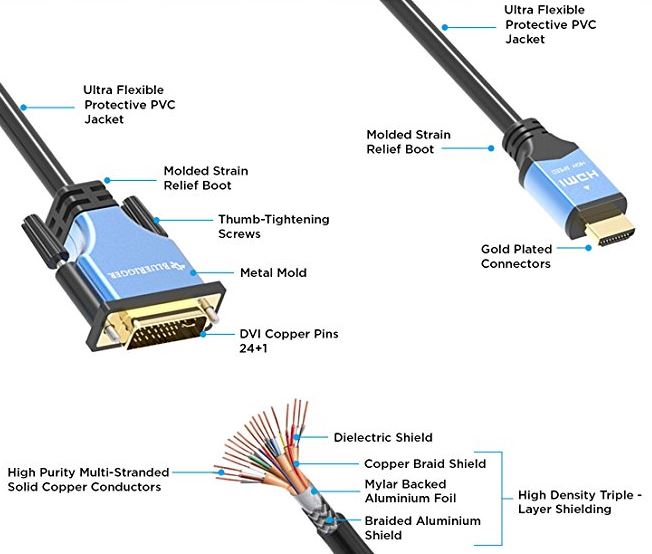 BlueRigger includes a lifetime warranty for their adapter cable. Keep in mind, the DVI end of this cable adapter means audio isn’t going to be carried. You’re going to need a separate audio cable adapter using a Toslink cable, or to find your own solution for sound. But once you’ve got everything screwed-in tight, the connection is quite solid and reliable. 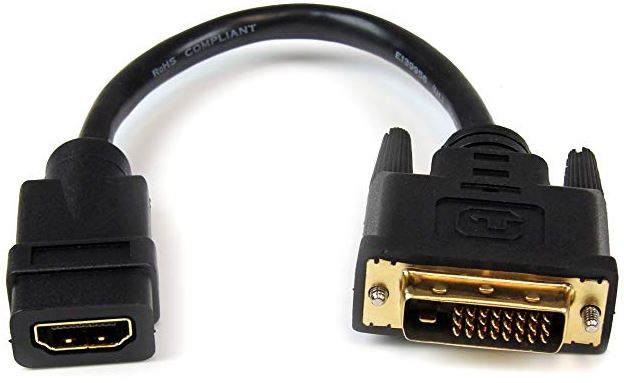 The StarTech 8” HDMI to DVI-D cable is little different. While the BlueRigger adapter uses a male HDMI to male DVI connection, StarTech adapters are available in the slightly unusual male HDMI to male DVI configuration. They still manufacturer the male-to-female variety, but this unique adapter allows you to pair a variety of your laptops, monitors, and similar devices together. 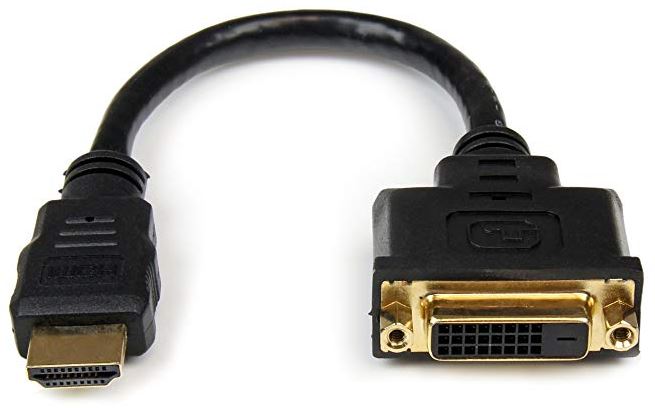 StarTech’s adapter cable runs 8-inches in length, which provides ample distance for your electronics to make a connection. If you’re trying to connect your laptop to a PC monitor, that bit of extra distance can be incredibly important. And it can eliminate the need for several cables, cutting down on clutter.

The cable itself is composed of aluminum Mylar foil, which has been protected by a standard braided shielding. While StarTech doesn’t point it out in their advertising, they do use gold plated connectors. And when you’ve got each end seated, it’s fair to say the overall construction is solid. Moving and removing each connection is butter-smooth, providing an excellent amount of firm resistance in each direction. 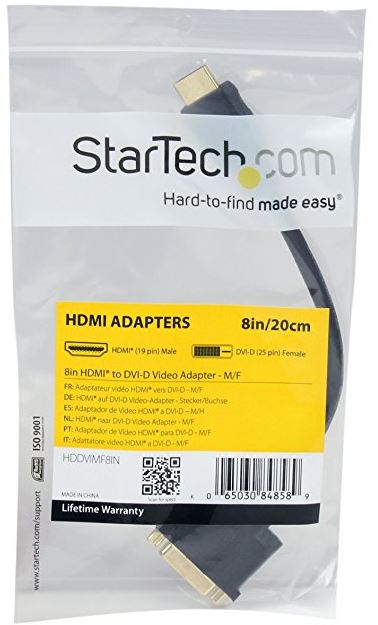 More importantly, using the StarTech 8” HDMI to DVI-D Video Cable Adapter may mean you don’t have to use multiple adapters. Having the option to use the less-common male HDMI to female DVI adapter cable configuration provides a much broader range of devices which can be connected together. That can prevent you from having to use two adapters for one signal, which can produce disastrous results in signal degradation.

You may want to note, this connector uses DVI-D pins, not DVI-I pins. And if you pay close attention to the ends of the connection, on the HDMI end, pins 13 and 14 aren’t present at all. Those pins correlate with the remote control signals and reserved for audio and 100Mbps Ethernet features on HDMI. Because those features don’t exist in the DVI-D format, there was no need to place those pins on the HDMI cable. It will, nevertheless, function like an ordinary HDMI cable.

The StarTech HDMI to DVI-D video cable adapter is good choice for the unique circumstance of HDMI male to DVI female connections. Their cable adapter is sturdy from top to bottom, and provides standard set of DVI-D pins which are appropriate to the HDMI content for which it is adapting. Although you’re limited to about 8-inches of distance between your devices, that’s about all most people will need.

The BlueRigger HDMI to DVI is a simple choice for male DVI to male HDMI connections. For connecting panels to display devices, this adapter would be welcome in essentially any environment. BlueRigger is also the best choice if you happen to need distance for your adapter cable because it offers some of the least expensive, highest quality HDMI to DVI signal conversions you can buy.

The CableCreation Gold-Plated DVI to HDMI adapter is a cable-free design. It’s handy for keeping things clean and minimalistic. Just snap it onto the end of a cable, to the backside of a graphics card, or toss it in your pocket. If you don’t need cabling to add distance between the devices you’re trying to connect, then this 2-pack of HDMI to DVI adapters can be an insane value.