Finding the right nitrogen regulator is both difficult and important. You need to find a regulator that can provide the kind of delivery pressure and application pressure necessary for your application. But you also want a regulator that’s equipped to take on the pressures of contact with pure gasses. To understand exactly what to look for, you’ve first got to take a closer look inside of a basic regulator.

The most fundamental components of a regulator are a loading mechanism, a control element, and a sensing element. They work in conjunction with each-other to help manage and moderate pressure within the device. The loading mechanism is usually spring-based, so you turn a knob to compress the spring. The spring then interacts with the sensing element.

A diaphragm is the sensing element for most regulators, constructed either from metal or an elastomer material. That allows the control element to work as a valve that increases or decreases pressure. As the diaphragm gets displaced, it pushes on the control element to move away from its seated position, resulting in the entry point for gas to become wider.

Obviously this is a system that could fail at many points. One of the most obvious is the elastomer seal. Unless you’re using metallic seals, you’re going to end up with gas impurities. Even if you’re not using a high purity gas (99.995% pure), you’ll still want to protect your system from contaminants. Clearly it’s essential to make the right selection, but what makes for a great regulator?

The standardized fittings system, the CGA system, has established a standard for nitrogen tanks. That standard is the CGA-580, which is made to support non-oxidizing, nonflammable gases like nitrogen. As long as you select a CGA-580 regulator, you’re off to a good start. But there’s much more to finding the right regulator than simply finding the fit.

Material construction should be either casting metal or a bar-stock body made from a machined metal bar. Bar-stock bodies are better adapted for applications involving high purity gasses. Being machined, bar-stock bodies allow a small internal cavity in the device for purging the regulator of contaminants.

Using a cold-drawn metal bar as its starting point, bar-stock bodies can have a tight grain structure that’s excellent at resisting contaminants. But unless you’re dealing with incredibly pure gasses, and you wish to keep them at those levels of purity, you’ll be better served by more ordinary casting metal constructions.

When higher purity gasses are being used, system components need to be diffusion resistant to a greater level. As for the material of the diaphragm, stainless steel is usually the best choice because it doesn’t absorb and release contaminates. Diaphragms that aren’t stainless steel may perform very poorly with high purity gas.

Additionally, stainless steel is great for preventing leakage between the diaphragm and the regulator. By contrast, elastomeric designs may degrade with the passing of time, reducing their integrity until a leak is all but inevitable. They’re also prone to absorbing gas, which can compromise the purity of your system.

Single stage regulators have a slight increase in the pressure of delivered gas in the moments before and after use, which is called decay rise. Two stage regulators keep delivery pressure at a steady constant, which provides greater accuracy and control over pressure. That’s possible because the gas has to go through two valves rather than one. But unless you have specific reasons to control pressure to within extreme margins of error, then you’ll find few reasons to choose a two-stage regulator.

Another regulator to keep an eye out for is a line regulator, which is a type of single stage regulator which has onboard sensors allowing to provide pressure monitoring. They’re great for operations where it’s difficult to measure the pressure of a system directly with the use of an instrument.

It should go without saying, but you want to select a regulator specifically for nitrogen. Compatibility between gasses and the regulator materials is essential for safe operation. Components that contact with wetted surfaces need to be compatible with whatever gasses you use, and regulators built for gasses that aren’t nitrogen won’t necessarily have the construction you need for safe operation.

It should also almost go without saying, but you want the regulator to be equipped to take on the levels of ingoing and outgoing pressure necessary for your tasks. For smaller systems like refrigerators, modestly powered regulators equipped for 300 psi are typically adequate. If you find yourself in need of outlet fittings to adapt your regulator, you’ll want to check to see if the manufacturer’s design is amenable to being adapted. That includes not only the size of the fit between parts, but the materials of each component. 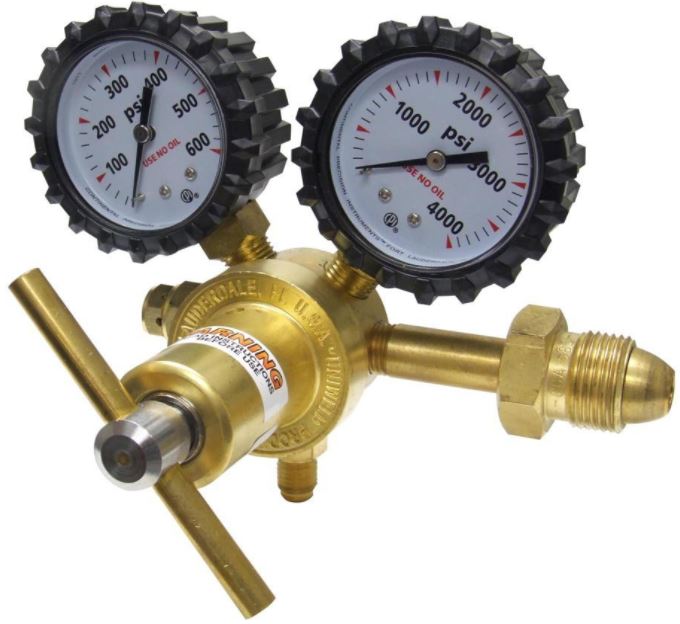 If you’re dealing with a single, ordinary sized nitrogen tank, then you probably won’t need anything more complicated than the Uniweld RHP400. It’s made from sturdy materials that give you little reason to doubt the quality of the construction. And it offers a fairly standard range of inlet pressure spanning 0 to 400 PSI, making it perfectly suited for use on smaller systems like refrigerators and A/C units. 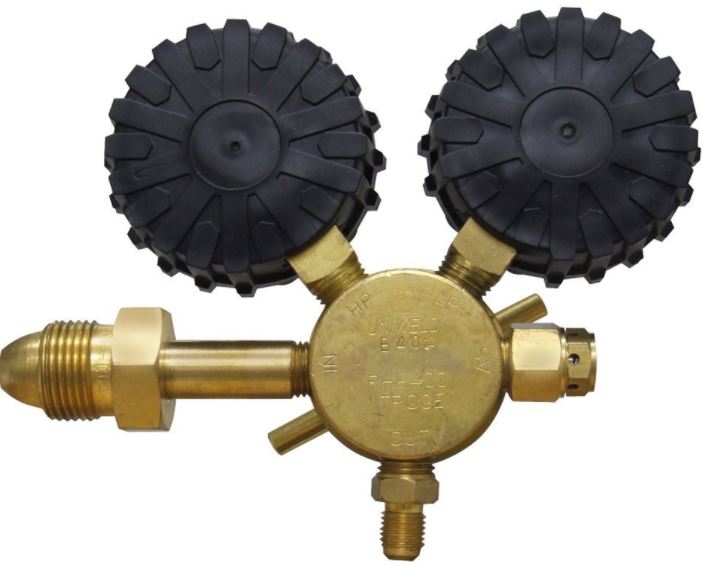 The regulator has two gauges, and both use a highly visible readout. Each gauge is also surrounded by a protective rubber gauge boot. Within the internal construction, you’ll find a durable brass piston diaphragm, made with a self-reseating relief valve. It won’t protect a downstream system, but it will keep your valve operating under heavy loads of pressure. The large brass T-handle uses a fully stainless steel construction, including metallic brushing to prevent galling. 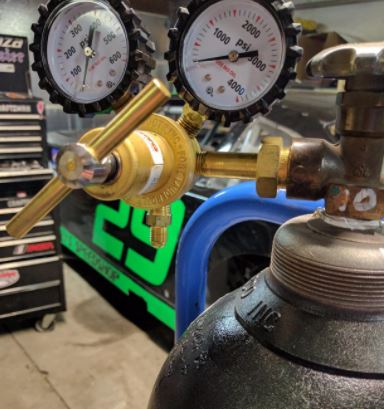 The body of the RHP400 is a typically-sized 5.5 x 4 x 5.2-inch frame, weighing about 2.5 lbs. It uses a CGA-580 inlet connection, paired with a 1/4” male outlet plug. In other words, it uses the standard connections for a nitrogen tank. But with minor adaptations, this regulator can easily be used with CO2. All you need is a Uniweld part adapter to get started.

All in all, this is a high performance regulator at a low price. Compared to extremely expensive regulators, you’re not going to get stability over pressure level, especially when you’re dealing with tiny quantities of gas. But for a nitrogen regulator in this price range, it’s not reasonable to make this kind of complaints. 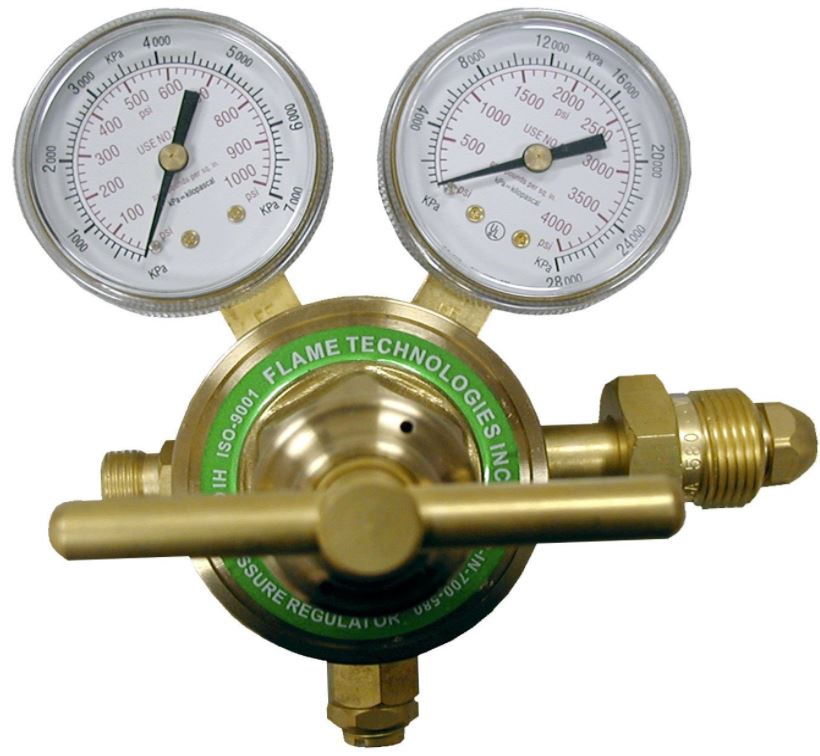 Flame Technologies’ regulator looks and feels every bit of the quality item that it is. Internally, it uses a brass pistol design that provides a greater deal of stability and control than you’ll get from similar nitrogen regulators. The entire bonnet and body is composed of forged brass, so you can have every confidence in the construction materials. And the engineering behind the design is equally solid, using a metal inlet filter that can protect from impurities in the gas. 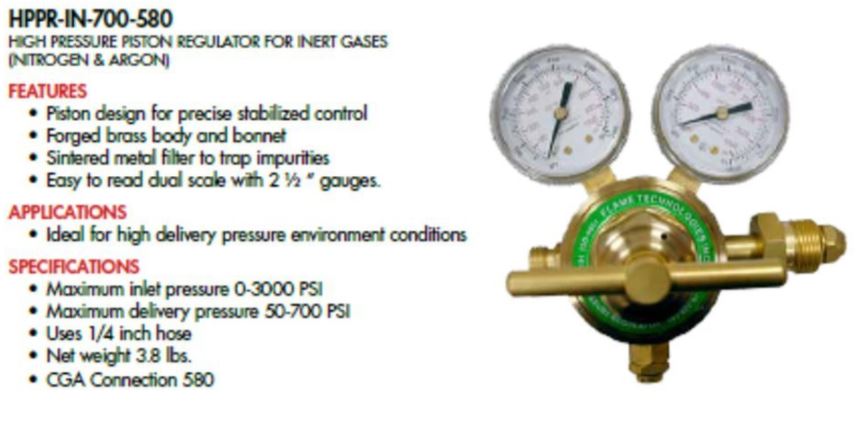 Flame Technologies’ regulator is designed for high pressure delivery, supporting max inlet pressure between 0 and 3,000 PSI. Even the max delivery pressure is fairly high, ranging between 50 and 700 PSI when using the ¼” hose. Putting aside its ability to hold up under pressure, this regulator is much like any other. For instance, it has the same standard nitrogen tank fittings.

It’s 8.1 x 6.7 x 4.9 construction is somewhat large and unwieldly, but remains as lightweight as 3 pounds. On the top of the regulator, each of the ½” gauges are quite clear and easy to read. But notably they’re not protected by any rubber gauging. Aesthetically speaking that’s probably an improvement, but it does make this regulator slightly more vulnerable to damage if it happens to suffer a fall.

Another thing that makes Flame Technologies stand out is their all-American construction. But all you really need to know is that this regulator can offer everything it claims to provide. It doesn’t have the same range of versatility as you’ll find in other gauges because you won’t find many adapter options from Flame Technologies. But the fact this regulator uses standard connections means it won’t be hard to find third party adapters. 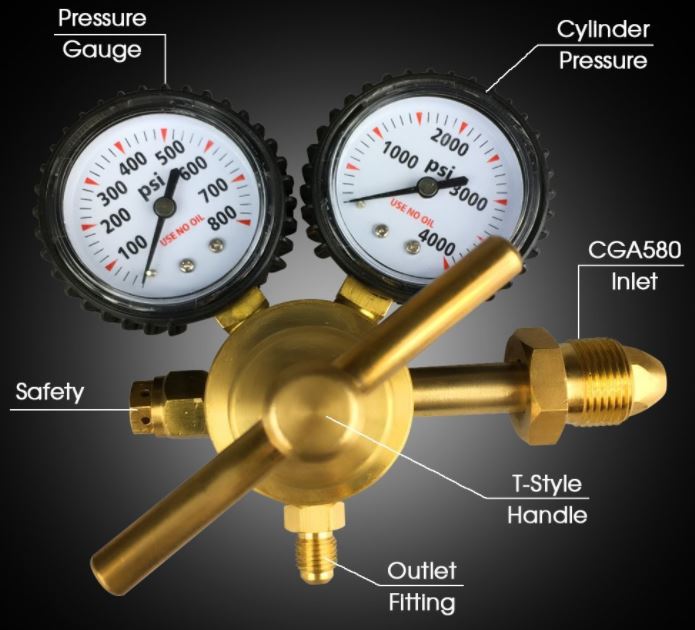 The PRO CO2 Nitrogen Regulator is for people who need a regulator that’s stronger than the most basic designs on the market, but not quite so powerful that they’re ready to be installed in an industrial setting. It supports a moderately wide range of inlet pressure, spanning 0 to 800 psi. Like with similar regulators, the readings are provided on two separate gauges. But Pro CO2’s gauges are likely the easiest to read of any regulator on the market, using extra-large bolt print for every dial. You should be able to tell what the readings are from a glance, even from a small distance. 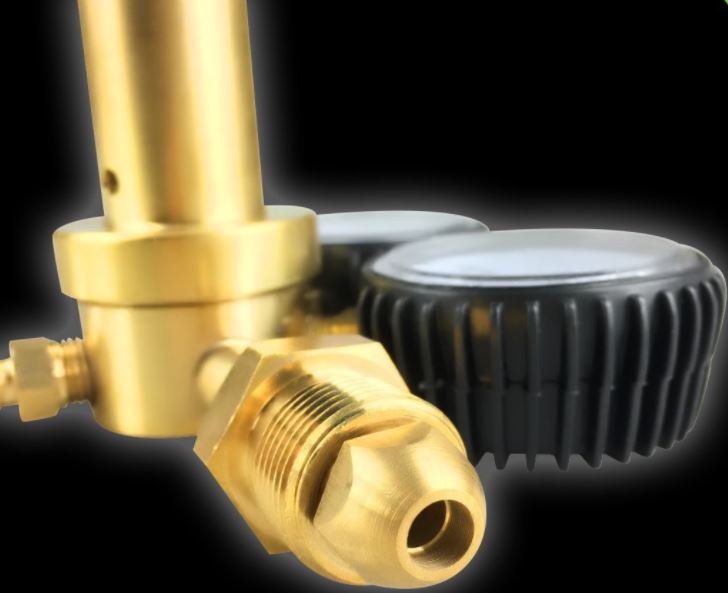 This regulator has a chunky 7 x 6.1 x 4.3-inch construction, and weighs nearly three pounds. Relative to its cost, this is an incredibly high quality piece of equipment. You’ll have a hard time finding a regulator that can comfortably handle 800 PSI within this price range, or at least one you can easily trust to handle high ranges of pressure. That’s thanks to a highly durable build which is largely composed of brass, allowing the PRO CO2 nitrogen regulator to work efficiently and accurately under straining circumstances.

Another thing to note is the T-style handle, which is ideal for making one-handed adjustments. That handle also makes it easier to deliver pressure with precision, either raising or lowering slightly with ease. Like many regulators, each gauge is protected with a rubber bumper that’s shock resistant. And this regulator uses standard CGA-580 inlet connections, paired with a ¼” male outlet connection, making it ready for any standard nitrogen tank. 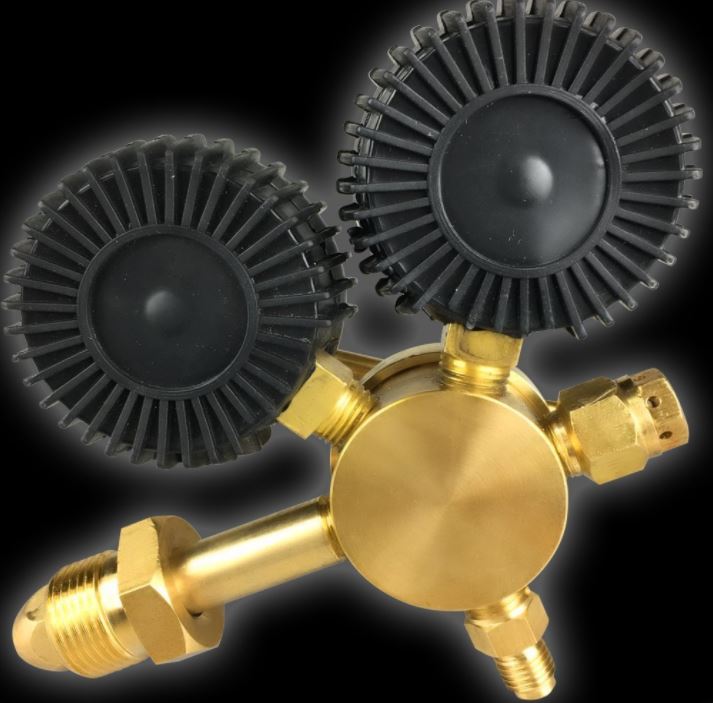 As far as nitrogen regulators go, this one is on the inexpensive side of things. Combined with the fact that aesthetically it doesn’t look particularly impressive, it’s easy to make the mistake of thinking this isn’t a sturdy piece of equipment. But its brass construction can easily take on the kind of pressures that they’ve advertised, so there’s no reason to be deceived by appearances.

If you’re looking for a regulator that can be adapted to other gasses, then the Uniweld RHP400 is a great pick. Its primary weakness is that it supports a relatively small range of PSI. The RHP400 is a fairly inexpensive regulator, and it’s might not hold up well under maximum load perpetually. But if you’re not pushing it to its limits, the RHP400 is an inexpensive way to get a reliable regulator for gas systems that are on the smaller side.

The Flame Technologies nitrogen regulator is a great choice for someone dealing with very high pressure forces. For up to 3,000 PSI of inlet pressure it will hold strong without budging, all the while providing you with a high level of control over pressure release. The construction is rock solid, which is unfortunately also reflected in its price. Although Flame Technologies isn’t a household name, their American-based construction does provide parts you can believe in.

Finally, the PRO CO2 regulator is a middle ground between the RHP400 and the Flame Technologies regulator. It has a much wider range of inlet pressure than Uniweld, but not quite the industrial-levels of support that you’ll find with Flame Technologies. If you’re looking for more than the RHP400 can offer, but you’re not trying to regulate a massive system, then the PRO CO2 is a great choice. And if you need more precision with respect to inlet pressure than you can get with other regulators, then PRO CO2 is again a wonderful pick.