If you want to protect your home and your loved ones, a good security camera is a useful tool. But there’s an obvious problem with most security cameras: they’re easy to spot. If you’re going for deterrence, that’s not a bad thing. As a matter of fact, many businesses use fake security cameras for exactly this purpose. But a fake security camera can only do you so much good. If someone sees it and they’re not deterred, you won’t actually gather any video. Moreover, they may simply evade the camera altogether.

Another solution is to use a well-hidden camera. For example, there are a number of nanny cams available that can be concealed in stuffed animals. In this way, you can keep an eye on babysitters and watch out for intruders. And with today’s technology, a security camera can be concealed in just about any device. Today, we’ll be looking at cameras that are disguised as smoke detectors. One advantage of this type of hidden camera is that it’s suitable for just about any situation. Not only can you use one at home, but you can use it at your business. Since every building needs smoke detectors, they’ll never look out of place. 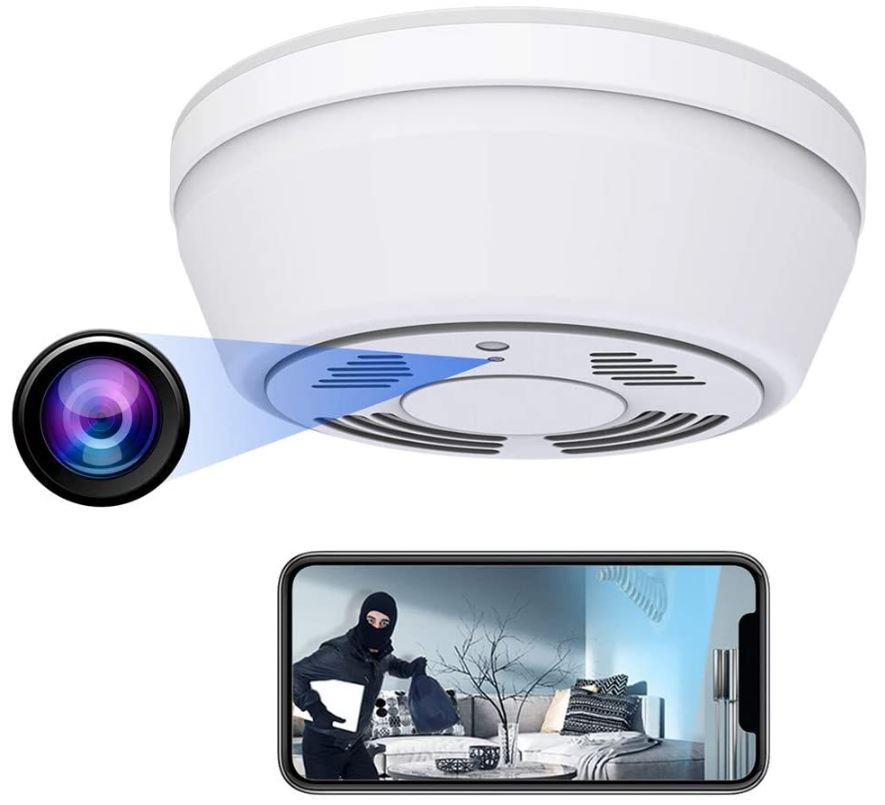 The WNAT Hidden Camera Smoke Detector, as you might expect, looks like a smoke detector. It’s off white in color, and has a sloped shape that’s not just functional, but attractive. It measures 1.96 inches in thickness, and 5.12 inches in diameter. One feature we should note is that unlike the other options on our list, it’s actually a working smoke detector. Unfortunately, WNAT does not state what kind of smoke detector it is. So we can’t say for sure whether it’s most suitable for kitchens, bedrooms, or other purposes. Still, it’s nice to know that there’s a multi-function unit available.

On the front of the unit, there’s a set of vents, which both look realistic and make the smoke detector functional. There’s a small reset button, just as you’d expect for a smoke detector. Next to the reset button, you’ll see a small camera lens. From more than a couple feet away, it just looks like an inactive LED bulb, so it’s nice and stealthy. It has a 125-degree field of view, so with smart positioning you can capture most of a room. The video quality is 720p, which means it’s well-suited for home use. That said, at longer ranges, you’re going to miss some details, so commercial use is an iffy proposition. 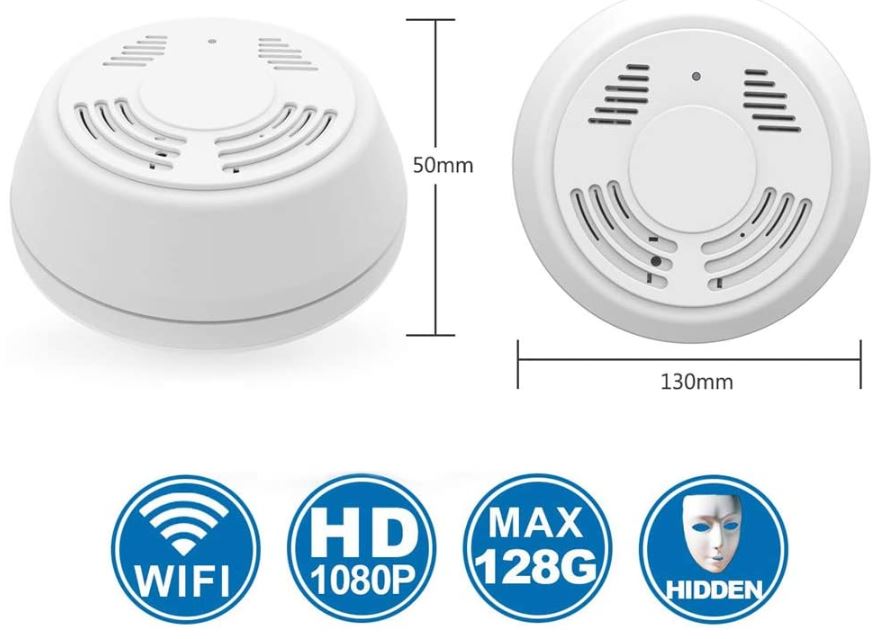 In addition to daytime use, the WNAT camera also works at night. It uses passive infrared technology, which doesn’t require an infrared light to function. That said, it won’t work in a truly pitch black space. At least some bare minimum of light, even moonlight, is required to get a picture.

The internal battery has a capacity of 5,500mAh. This supports 180 days of standby time and 20 hours of recording time. Of course, you’re going to need to recharge it periodically. If you’re using the camera in your home, you may even need to recharge it frequently. Thankfully, it recharges via USB in just a few hours, which makes the process relatively painless. 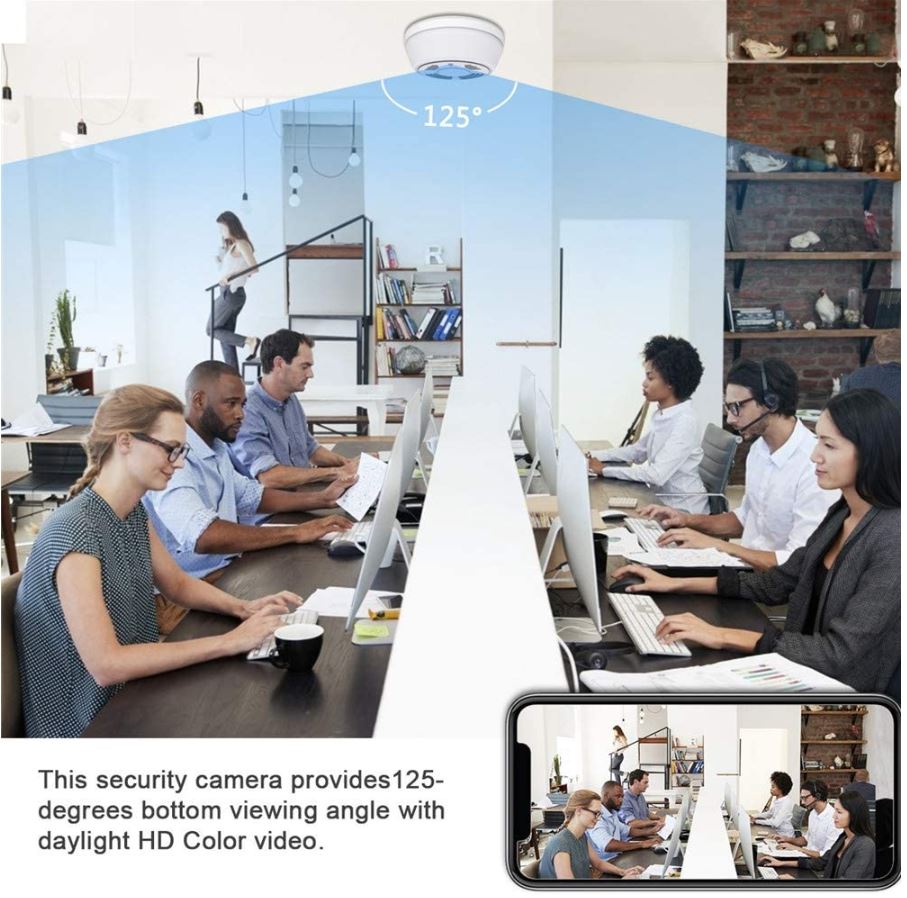 The WNAT security camera also uses passive infrared for motion detection. When it detects movement, it will immediately begin recording. When the movement ends, it will stop recording. This ensures that it will spend most of its time in standby mode, maximizing your battery life. When the motion detector activates, you’ll receive an alert on your smartphone. You can click on the alert to view the live video, or dismiss the alert and get back to what you were doing. Keep in mind that for this to work, you’ll need to install WNAT’s mobile app. It’s available for free on the Apple Store and Google Play. Simply use the app to pair your phone with your camera, and you’re ready to go.

You can also use the app to bring up a live feed anytime, anywhere. If you have kids or a babysitter, you can keep an eye on them whenever you like. All of the wireless features require a 2.4GHz connection. This means that the camera will need to be relatively close to your wireless router. Exactly how close is going to depend on your router. Check your router’s spec sheet to see what the range is for your make and model.

The video itself is recorded locally, not in the cloud. The WNAT camera accepts a standard SD card, which makes storage easy and simple. You can use up to a 128GB SD card, so you’ll have plenty of space for storage. Alternatively, you can simply record the video to your phone or tablet through the app. Keep in mind that this will fill up your local storage relatively quickly, so it’s not a long-term solution. 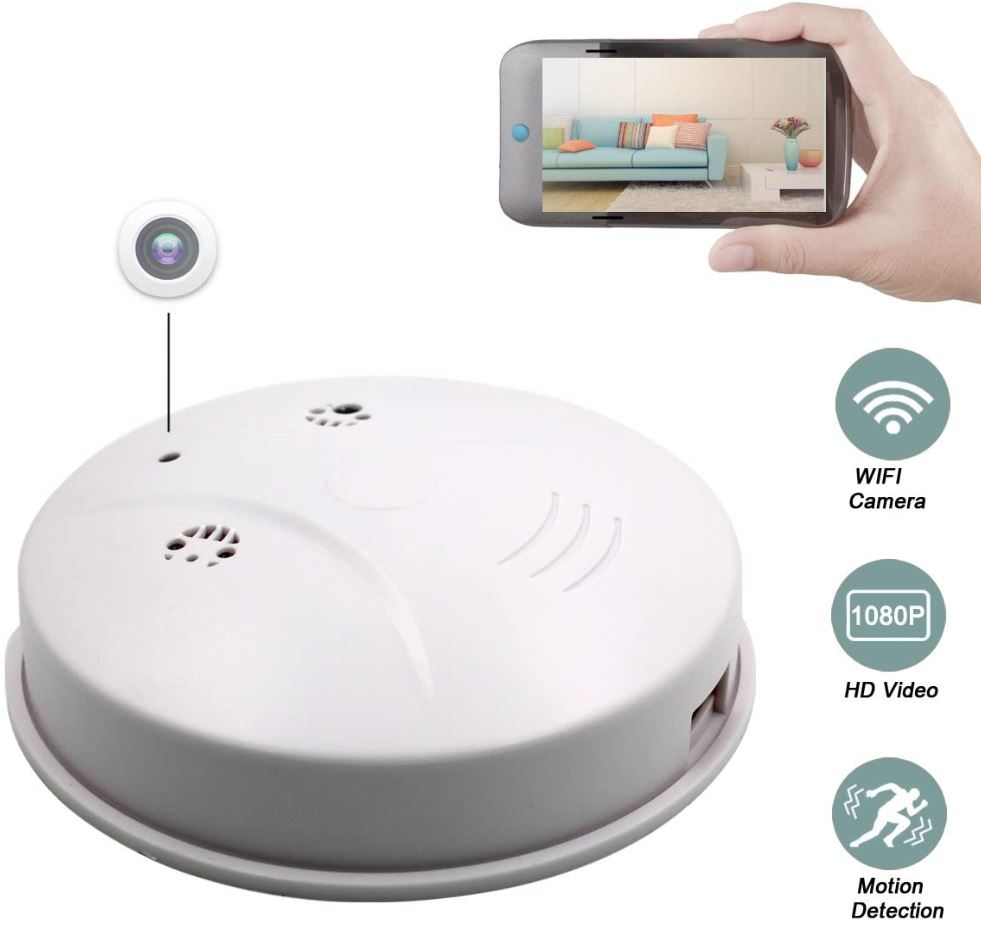 The Sunsome Upgrade WiFi Hidden Spy Camera Smoke Detector is a bit slimmer than the last option. It has a hockey puck shape, but a similar off white finish. There’s an LED light on the surface, which can be turned on or off to match other smoke detectors. This makes it a bit more versatile than some of the other options on the market. It also comes with a relatively robust warranty. Within 3 months of purchase, you get your choice of a refund or a replacement. Within 1 year of purchase, you get a replacement if anything goes wrong. For a small, inexpensive device, this isn’t bad.

The Sunsome camera records in 1080p. This makes it well suited for commercial use. Even on a high warehouse ceiling, you’re not going to miss any details at ground level. On the other hand, there’s no night vision capability. If the camera is located in a dark room, you’re not going to get any useful footage. 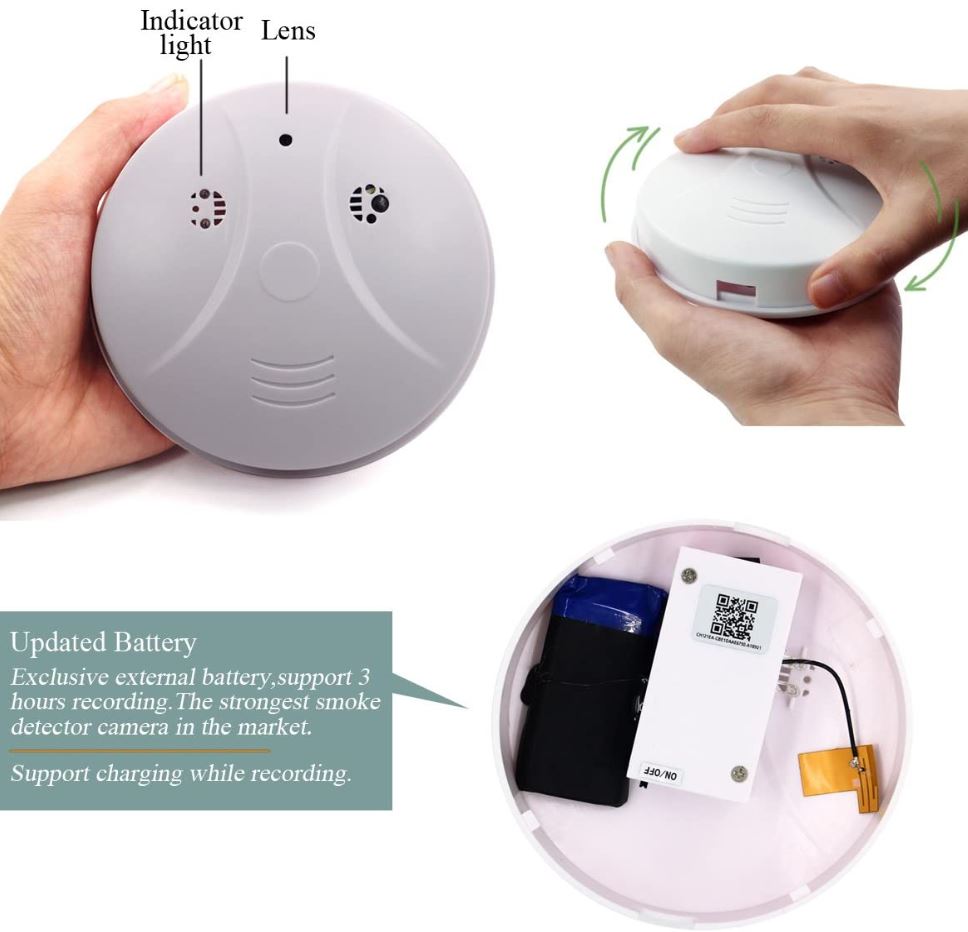 The internal battery has a capacity of 2750mAh. This is less than most comparable smoke detector camera batteries. As a result, you’re looking at a relatively limited record time of 4 hours. That said, the battery can be charged while the camera is in use. If you’re willing to install a USB power supply behind your camera, you effectively have infinite battery life. Otherwise, you’re looking at about a 4-hour charge time.

Like the WNAT camera, the Sunsome uses a motion detection system to start recording. As soon as motion is detected, the camera will automatically begin recording. The camera needs to pair with a smartphone app, which is available for free on iOS and Android. You’ll need to use the app to enable motion detection. Otherwise, the camera won’t function. Once your phone has been paired with the camera, you’ll also get mobile alerts. You can either click the alert to view the live feed, or dismiss the alert and watch the video later. You can also view a live feed whenever you like. Simply open up the app and bring up the live feed to see what’s going on. In this mode, you can activate recording manually, without the need for motion detection. 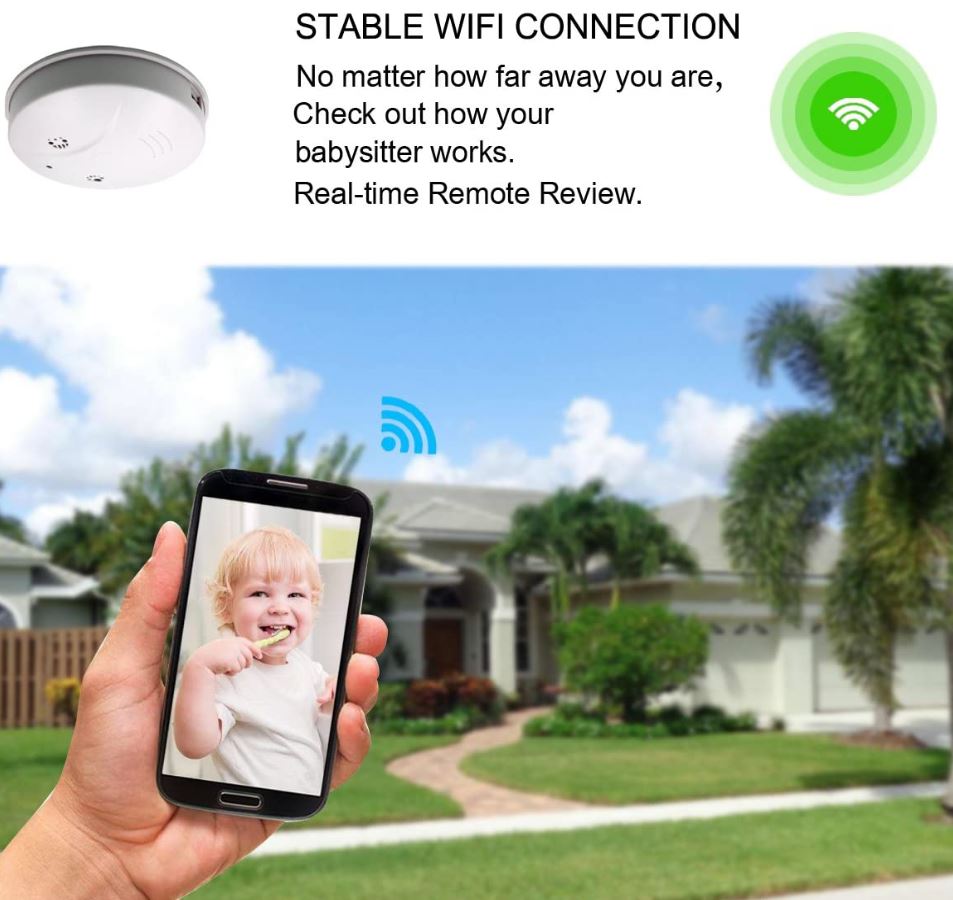 The Sunsome camera records video to an SD card, and supports card sizes of up to 64GB. It utilizes loop recording, so newer video will record over older video. This means you won’t have to manually delete video when the card gets full. All video is timestamped for archival purposes. Also, for any wireless features to work, you’ll need a 2.4GHz connection. Check your router specs for 2.4GHz range and plan your camera placement accordingly.

One thing a smoke detector camera lacks is portability. They’re easy to conceal, but you can’t carry one around inconspicuously. If you need a portable spy camera, check out our review of the best spy pens. Put one in your breast pocket, and no one will think twice. 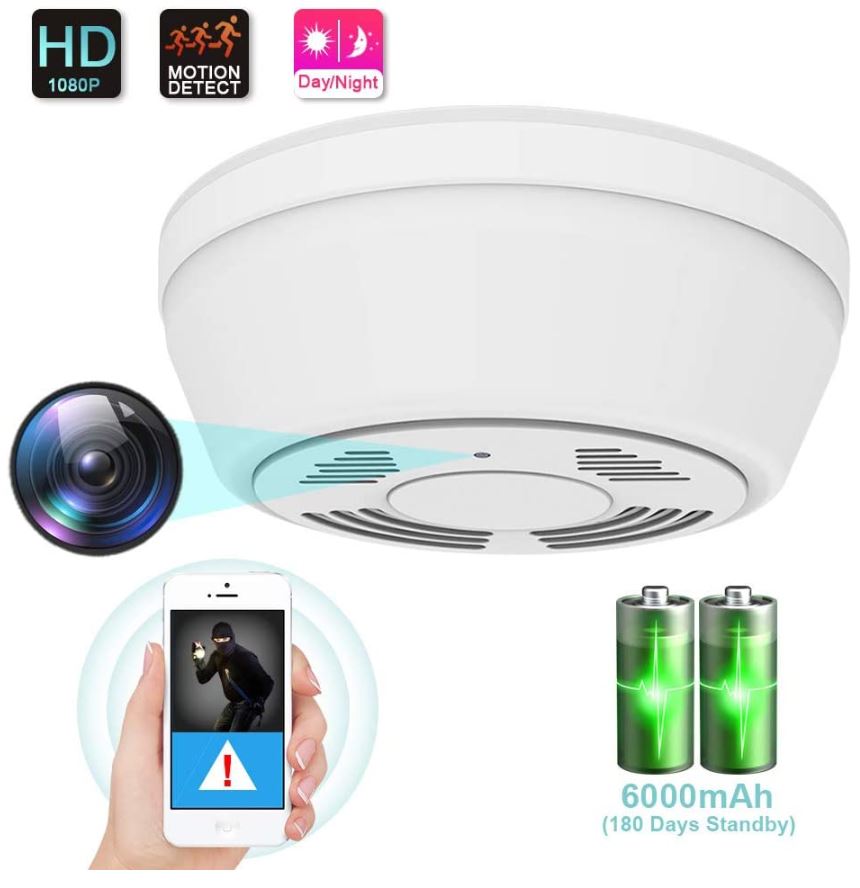 The Nanshiba 1080p Hidden Camera Smoke Detector has a sloped design, similar to the WNAT camera. It’s a bit thicker, though, at 2.5 inches, with a 5.5-inch diameter. It has a pale white finish, lighter than the last two cameras, so it should match most white ceiling paint. The front has a series of round vents, but they’re just there for show. This is strictly a security camera, not a functioning smoke detector. The lens is disguised to look like a smoke detector button, so it blends in well. The Nanshiba camera has a 6,000mAh battery, with a 180-day standby life. When you do need to recharge it, it takes just a few hours to charge via USB. 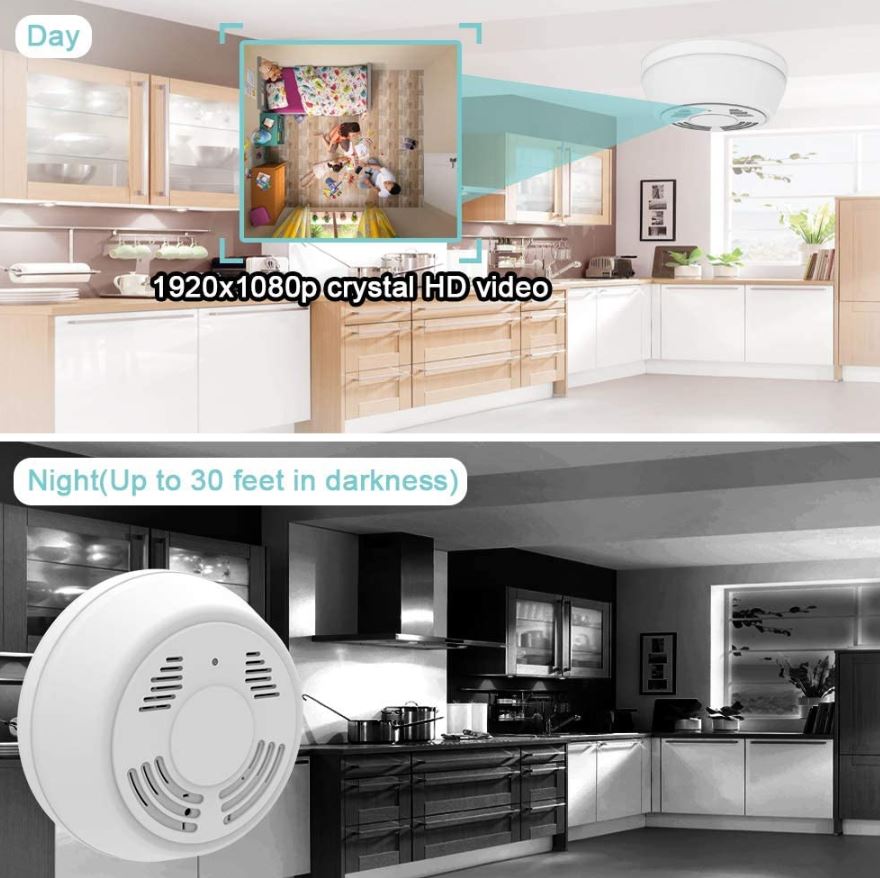 The camera resolution, as the name implies, is 1080p. This is good enough for commercial use, with a 125-degree viewing angle that covers a large area. Use it at home, at a retail store, or a warehouse, and it will perform equally well. There are also built-in LEDs for night vision. This means it can operate in pitch blackness, with a range of up to 30 feet. If you need excellent night vision, this is where it’s at. 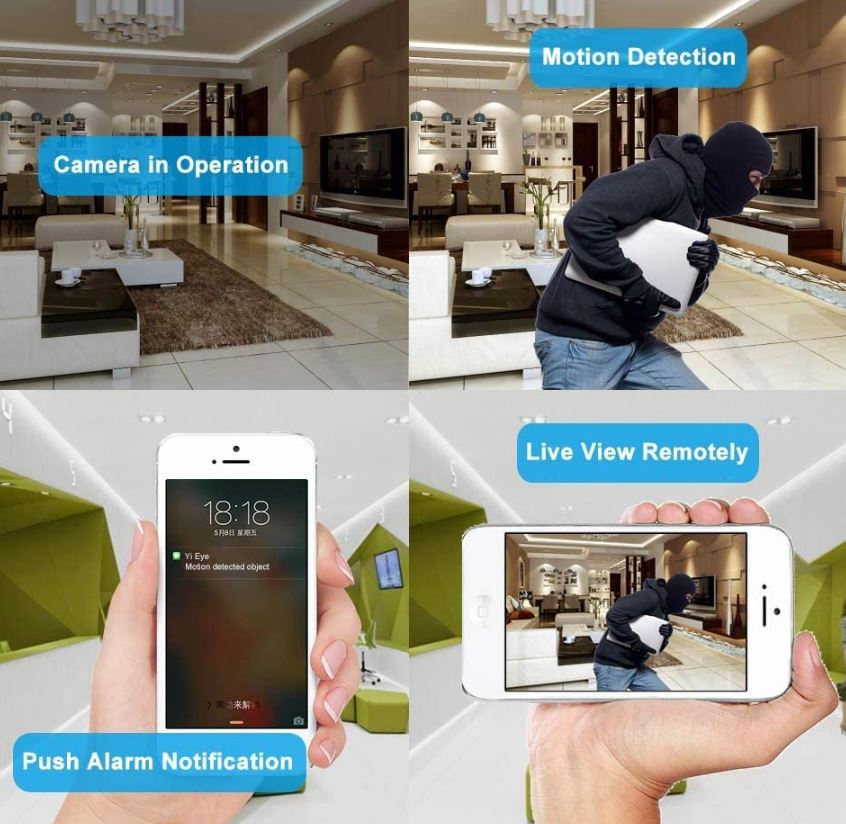 Like the other cameras on our list, the Nanshiba uses a smartphone app for most of its functions. This requires a 2.4GHz connection, with the accompanying range issues. That said, you can still use the camera without wireless access. You’ll just have to remove the SD card to view it. The Nanshiba camera accepts up to a 128GB SD card, so capacity is not an issue. If you do have the app enabled, you’ll be able to take advantage of motion detector alerts. You can also view a live feed with a tap of your finger.

As we mentioned, there are plenty of ways to conceal a security camera. Since a smoke detector might not be ideal for all rooms, how do you protect your entire home? One way is to use a photo frame hidden camera. These can be concealed virtually anywhere, and double as a piece of home décor!

So, which one of these smoke detector hidden security cameras is the best? As with most gadgets, the best product is going to depend on your needs. The WNAT Hidden Camera Smoke Detector is an ideal choice for home use. With 720p resolution, it’s not absurdly powerful, but it’s good enough for close ranges. Not to mention, it has night vision, and it even doubles as a functioning smoke detector.

The Sunsome Upgrade WiFi Hidden Spy Camera Smoke Detector is a better choice for commercial use. You can essentially hardwire it, which means you don’t have to deal with taking it down for charging. The 1080p resolution is good enough for high commercial ceilings, so placement is not an issue. On the downside, it doesn’t have night vision, so it’s not suitable for all applications.

The Nanshiba 1080p Hidden Camera Smoke Detector is a more versatile option. With 1080p resolution, it’s suitable for just about any placement you can imagine. And with active infrared night vision, you can capture footage under any lighting conditions. On the downside, the battery does need to be charged periodically. This might cause issues for commercial uses, depending on your needs.