When your television is mounted close to the wall, getting a regular HDMI cable to fit can be tough. It can even be impossible. Even if you get it to work, stress on the end of the cable can gradually wear it down until you need a replacement. Many people buy expensive HDMI cables only to have them ruined by the bending pressures placed on the cable after they’re installed.

Whether it’s a matter of convenience, space, or lasting power, using right-angle adapters can alleviate all of these problems without requiring you replace your cables.

Choosing the right adapter is usually a matter of considering the size of the adapter, the physical orientation of the adapter, the HDMI format it supports, and the general quality of its construction. Going through this list, you can identify your own priorities and match them with the right equipment.

You want to be certain the adapter will fit in the space you’re trying to place it. In most cases, smaller is better. The largest adapters you want to consider will usually be not much later than one inch in any single dimension. For people who are working with televisions positioned directly against the wall, or in similar tight spaces, it can be particularly important to look for smaller adapters.

Just because the adapter uses a right angle doesn’t mean you know the direction the plug will come out! In addition to being built in a number of different sizes and styles, right-angle adapters have two common types: the 270° adapter and the 90° adapter.

If it’s been a few years since you’ve taken geometry, a 270° adapter is basically a 90° adapter that’s been flipped. Some people aren’t very good when it comes to spatial orientation, it can be useful to choose adapter kits that include both angles, so you always have the right option at your disposal. 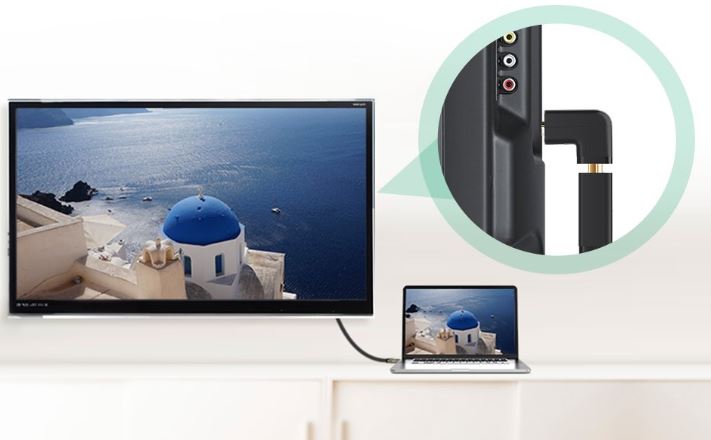 Are you using cables that take advantage of features from HDMI 1.4 or HDMI 2.0? Then you’ll want an adapter capable of handling those formats. HDMI is backwards compatible, which works by lowering itself to the lowest common shared format among all connected components. If you’re using HDMI 2.0 cables and HDMI 1.4 adapters, then you’re going to end up with an HDMI 1.4 signal.

You’ll want HDMI 1.4 if you intend to take advantage of higher refresh rates, 3D support, and expanded audio channels. HDMI 2.0 provides the deeper color bitrates necessary for HDR content, and is more optimal for 4K content. More often than not, your best bet is choosing an adapter that supports HDMI 2.0 because it means you’re ready for the future.

Even if you don’t need to make use of these kinds of features currently, having an adapter that’s ready for modern generations of HDMI equipment doesn’t hurt. Because once again, HDMI is backwards compatible, so any good adapter should be able to last for years.

When it comes to the physical HDMI connection terminals, gold plating is typically the way to go. It resists corrosion quite well, which keeps the adapter working overtime. That can be particularly important if you happen to use the adapter in a mobile capacity.

If the adapter is going to end up connected to the backside of your TV, and then never seen again, you really just want to make sure it’s built to basic levels of sturdiness. You won’t even have to be concerned about using gold plating, provided the adapter won’t spend its entire lifetime in high humidity environments.

If you’re actually going to make use of the adapter on a somewhat regular basis, plugging and unplugging it, then you’ll have to pay more attention to construction quality. Tiny adapters can be tough to pull apart once they’re in place.

For people who are intent on using their right angle HDMI adapters for mobile applications, it can be useful to look at the texture of the adapter. Does anything about the design help you get a firm grip against the adapter, so you can pull it free? If there aren’t any bumps or ridges you can use to pull against, then the adapter can become stuck quite easily. 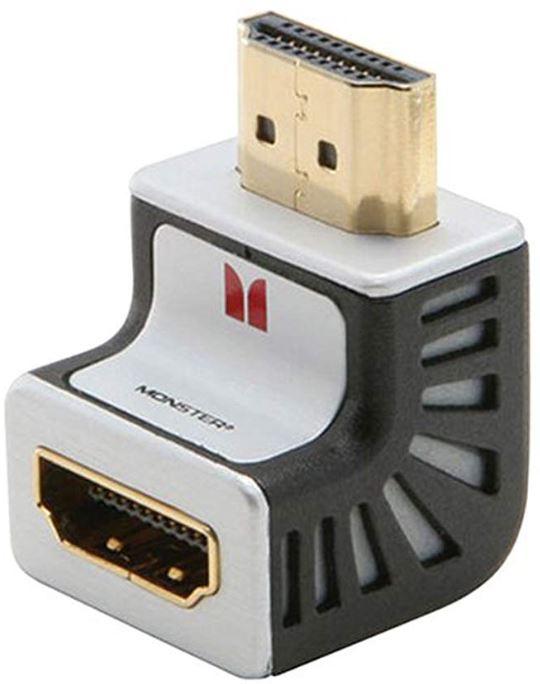 The Monster brand makes a number of value-oriented cables and adapters. None of them scream top-of-the-line, but they’re usually a pretty good bargain. With the Monster Ultra-High Performance HDMI Right-Angle Adapter, a pure copper construction allows for lower resistance from the signal passing through the adapter.

Combined with several similar simple but smart design decisions, this adapter will probably be the right choice for most people with non-specific applications in mind.

Monster Ultra-High Performance Adapters are available in packs of two, four, and eight. Each option is more economical than the last, which makes them a pretty good choice for someone who needs several adapters. Each adapter weighs about an ounce, while the adapter itself is roughly 0.6 x 0.5 x 0.8-inches. In short, you’ll have no trouble sticking these adapters in almost any place you might want to place an adapter. 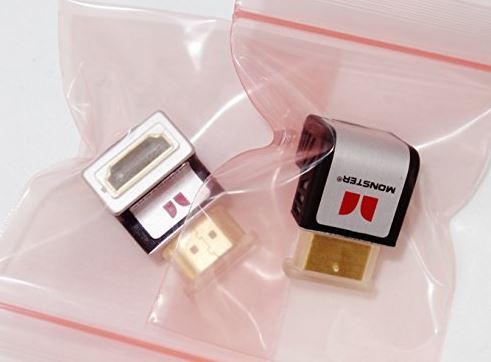 Though it’s a little hard to tell, each adapter has an aesthetic that’s actually distinctive of the Monster brand. It’s a mixture of gray and black, that’s probably intended to seem bland yet professional. What’s a little more interesting is the outside edges of the adapter are covered with small grooves, which allow you to get a firm grip. For someone who plans on eventually unplugging their adapter, these grooves can be an enormous help.

Though it should almost go without saying, each adapter was specially designed to be used in tight spaces, and to adapt horizontal cables to a vertical output. Unfortunately, one thing the Monster brand isn’t known for is amazing warranties. But their customer service has a reputation for being pretty cooperative, and the odds you’d end up with a dud are pretty low to begin with. 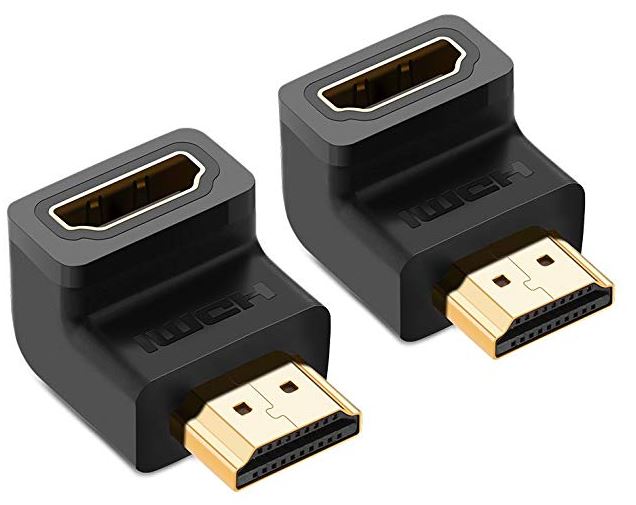 Apart from their orientation, both adapters are essentially identical, and both provide the flexibility necessary to connect with your HDMI devices without having to damage your equipment. Both support 2K and 4K resolution, and are backwards compatible for lower resolutions all the way down to 480p. 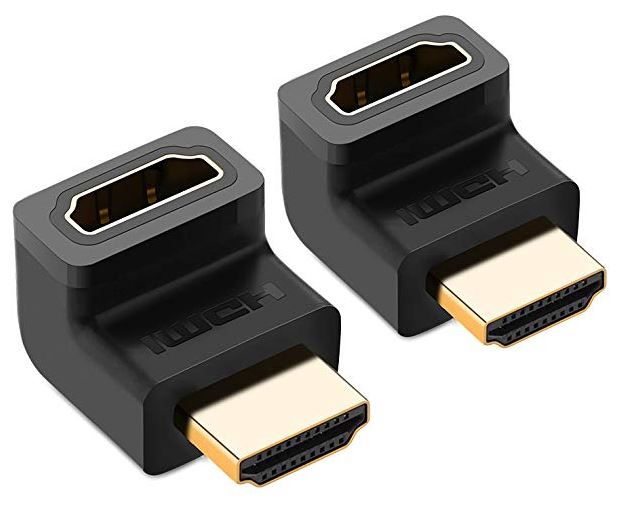 Similar to the Monster adapter, each UGREEN adapter has a utilitarian look. It’s combination of gray and a lighter gray, highlighted only by the red Monster logo and gold-plated connection terminals. The outer edges of each adapter has several large rubberized spots. Though it’s easy to overlook tiny details like this, these spots help provide a firm grip for your fingers as you insert or retract the adapter.

Both styles of adapter measure roughly 0.8 x 0.43 x 0.66 inches. Because these adapters were made to expect sharp angles, the internal lining of each adapter has been fixed for performance stability, along with an internal PCB welding to keep the 19-core wiring in place. Apart from looking pretty, the 24k gold plated connection terminals really do help resist corrosion and help keep your adapter going. 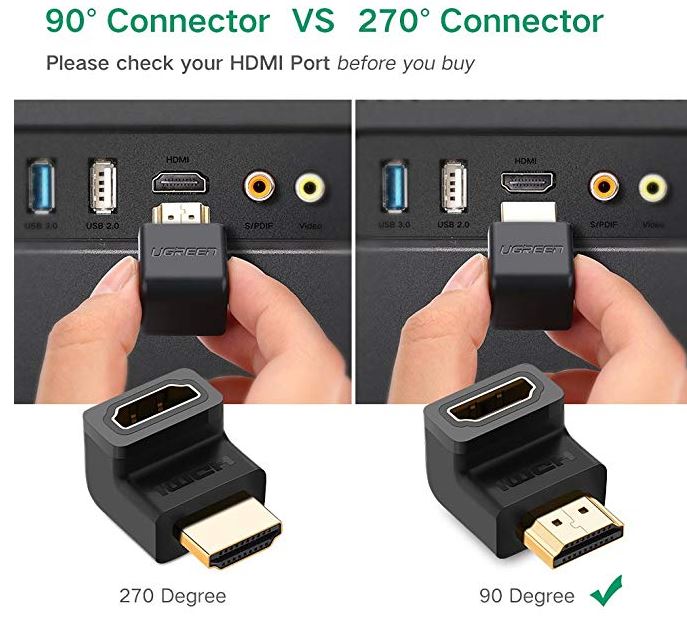 This adapter supports ARC and HED for both Ethernet and audio return capacity. It carries 48-bit color, supports 32-channel audio, HDCP, Dolby True, and 3D video. The UGREEN Right Angle HDMI adapter also supports Roku Stick, Xbox, PS4, PS3, Chromecast, and just about anything else you might want to connect.

The matte black plastic used by these adapters is terribly vulnerable to scratches, scrapes, and fingerprints. This isn’t much of an issue because these types of adapters are usually positioned well out of sight. As long as you don’t plan on using this adapter in a mobile capacity, the beautiful exterior should never be placed in any real jeopardy.

UGREEN includes a lifetime warranty for both adapters. Given the thoroughly rugged construction of these adapters, it seems easy to trust that warranty. 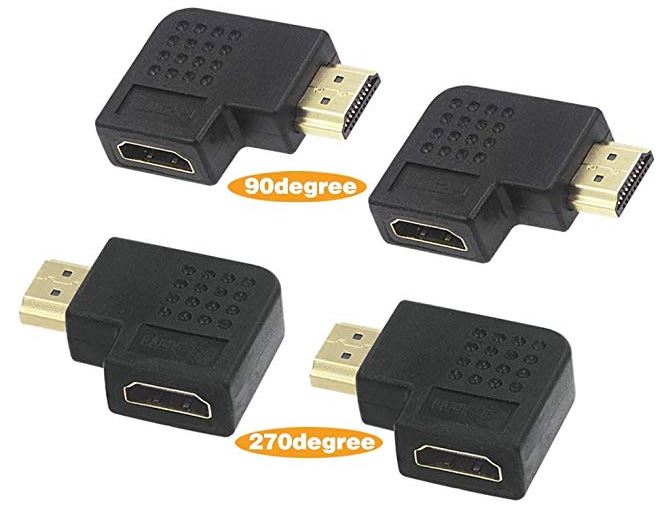 Unlike UGREEN adapters, the VCE Vertical Flat HDMI Adapters kit doesn’t make you choose between one angle or another. This kit includes one 90-degree adapter and one 270-degree adapter. Both run male-to-female HDMI connections, or are otherwise comparable to the other adapters on this list.

Though these adapters look as though they were made 20-years ago, they’re actually quite modern. VCE Vertical Flat HDMI Adapters are made to support the HDMI 2.0 format. That makes them ideal for 4K content, content high higher color bitrates, greater refresh rates, and so forth. Whether you’re interested in using those kinds of features or not, it’s nice to know your adapter won’t be the thing holding you back. 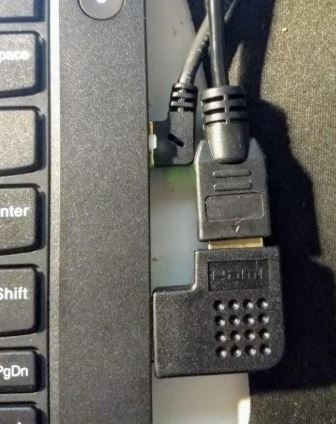 Each VCE adapter measures 0.9 x 0.93 x 0.33-inches, making them quite thin. That can be especially useful for connecting HDMI cables that are directly adjacent to the wall. Similar to the other adapters on this list, the VCE Vertical Flat HDMI Adapters are made with gold plated connection terminals for corrosion resistance.

Another mark of quality can be found on the face of the adapter. Both sides are covered with 16 texturized bumps, or 32 bumps in all. These little bumps might look like a style decision, but they’re actually great for helping you establish a firm grip against the adapter. Because once a small adapter is secured in place, unplugging it can be as challenging as unsticking Lego bricks. 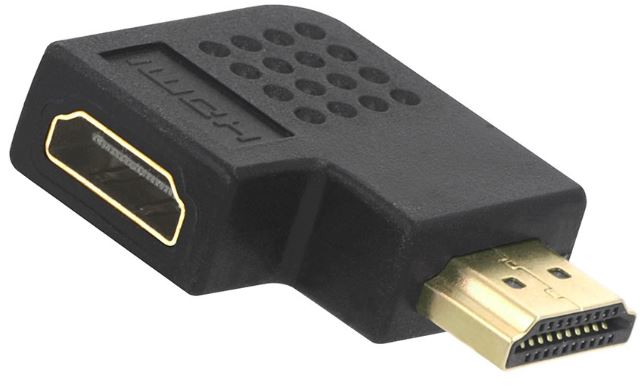 If there’s something to hate about this adapter, it’s the look. The plastic looks like they pulled it out of a dumpster full of products that were also made from ugly plastic. But the hideous nature of this adapter doesn’t seem to have affected its ability to get the job done. And once it’s in position, you won’t have to look at it anyway.

Not everyone is great at spatial thinking. Not everyone wants to plan out the precise way every cable will end up running. Because this kit includes both a 90-degree adapter and a 270-degree adapter, it prepares you for all circumstances. Decide you move your TV to the other side of the room, and suddenly you need your cable to run the opposite direction? You’re covered.

Choosing Between 3 of the Best Right Angle HDMI Adapters

The Monster Ultra-High Performance Adapter is easy to like. Each Monster adapter is made reasonably well. Though the Monster aesthetic is unremarkable, the texturized portions on the size of this adapter make it easy to work with. And being available in larger packs, Monster provides some of the best options for people who need several adapters.

VCE Vertical Flat HDMI Adapters are great for someone who’s looking for an adapter that’s as flat as possible. They’re ideal for sitting flush against the wall or against your television. Though these adapters look like they’re made from garbage, you can forget about that once they’re out of sight. VCE adapters are also the best choice for someone who isn’t certain about the kind of angles they’re going to need to use.