If you’re installing sensitive electronics, a surge protector is a must. For instance, rackmount surge protectors have been standard on server installations for decades. Similarly, pretty much everybody uses a surge protecting power strip for their PC and game console. But when you’re working outdoors, you run into an additional wrinkle. Your surge protector needs to be as weatherproof as whatever it’s protecting. Otherwise, it’s not going to do much good. This means setting aside your old interior surge protector, and investing in something new.

Today, we’ll be reviewing three of the best outdoor waterproof power strip surge protectors available on today’s market. We’ll start with the EIGSO Outdoor Power Strip. This looks like a traditional power strip, but it’s rated for outdoor use. Next, we’ll look at the BESTTEN Outdoor Power Strip. This is a vertical, pole-mounted strip that’s designed to be used in your garden. Finally, we’ll review the SOCKiTBOX Waterproof Connection Box. This is a protective, waterproof box that allows you to temporarily use an indoor power strip outdoors.
Which one is the right choice for you? We’re about to take a closer look at the benefits, features, and drawbacks of each option. After that, we’ll know enough to render a final verdict.

What is a Power Surge?

Before we start reviewing any surge protectors, we first need to understand what they do. At first glance, this seems obvious. They protect you from power surges. It’s in the product name! But what is a power surge? And why are they so dangerous to our electronics?

A power surge, or spike, happens when the voltage on a circuit increases far above standard. In the US, this is normally 120 volts on a household circuit. If the voltage goes above that, it can damage electronics that are connected and powered on. There’s actually a technical difference between spikes and surges. A spike is a very brief increase in voltage that lasts less than three nanoseconds. If the increase lasts longer than that, it’s considered a surge. Most surge protectors won’t protect against spikes, only surges. That said, a true power “spike” of such short duration only poses a danger to the most sensitive electronics. 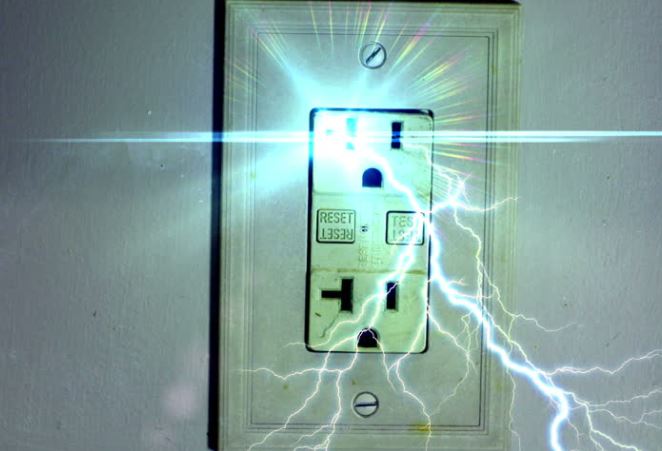 To understand why a power surge can damage your electronics, let’s use a mechanical example. Suppose you’re filling a water balloon. You turn the spigot on a low setting, and gently fill the balloon. If you were instead to turn the water up all the way, the balloon would explode. It’s not designed to deal with that kind of pressure. It’s supposed to explode under pressure and soak your friends! In this case, the water pressure is equivalent to voltage. Turning the water up (a power surge) causes the balloon to explode (your electronics fail). Worse, surges can cause damage over time. Your computer may not fail today when hit by a power surge. But its circuits can become degraded, slower, and more vulnerable to the next power surge.

Power surges can be caused by a wide variety of factors. However, in residential power, they’re generally caused by accidents. Lightning strikes, for example, are the most common cause of residential power surges. Other common causes include local subsystem failures, where excess current is errantly sent down one line. In modern power systems with computer controls, surges generally last for less than a second, usually only milliseconds. But that’s enough to degrade your electronics if they’re not protected. 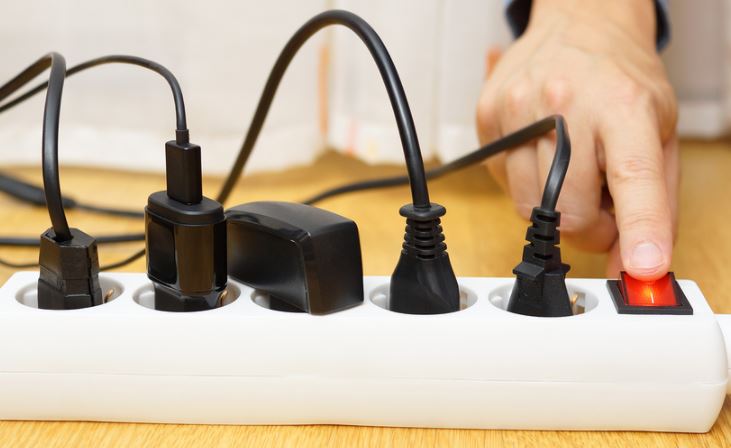 How Does a Surge Protector Help? 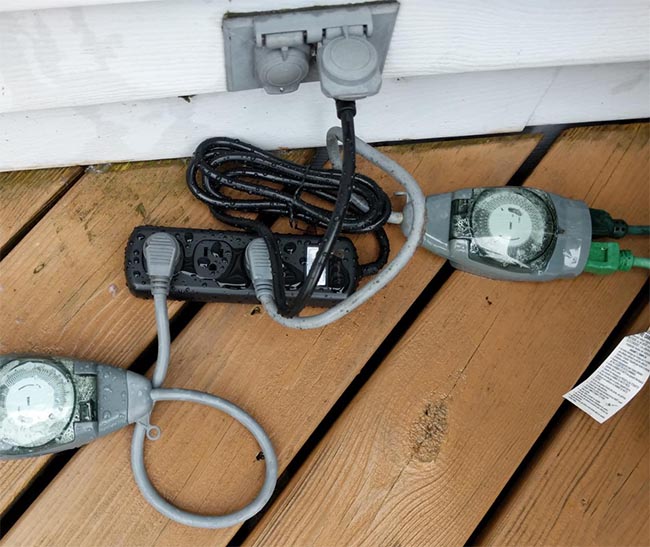 To divert the current, surge protectors use several different technologies. However, the most common variety uses a part called a metal oxide varistor (MOV). An MOV sits between the hot wire and the ground wire. The main circuit is made of highly-conductive metal oxide. Joining it to the power and ground line, there are variable-resistance semiconductors on both ends.

Variable-resistance semiconductors are engineered to change their resistance depending on the voltage. When the voltage is at 120 volts or lower, they have a very high resistance. Virtually zero power will flow across the MOV and into the ground line. As the voltage rises higher, the semiconductors open up new pathways, allowing more and more voltage to flow through. As a result, an MOV allows your devices to run normally when there’s a power surge. When a surge happens, it can accommodate a large flow of extra power to keep everything safe.

Once the excess voltage has been diverted to the ground wire, the main circuit’s voltage returns to 120 volts. When the surge ends, there’s no excess current, and the MOV becomes highly-resistant again. To extend our water pressure analogy from earlier, an MOV acts like a pressure-sensitive valve. Normally, it does nothing. But if there’s too much pressure, it gives the extra water (voltage) somewhere to go. Other types of surge protectors use different components, but they all work on the same general principle. Any extra current gets diverted to the ground. 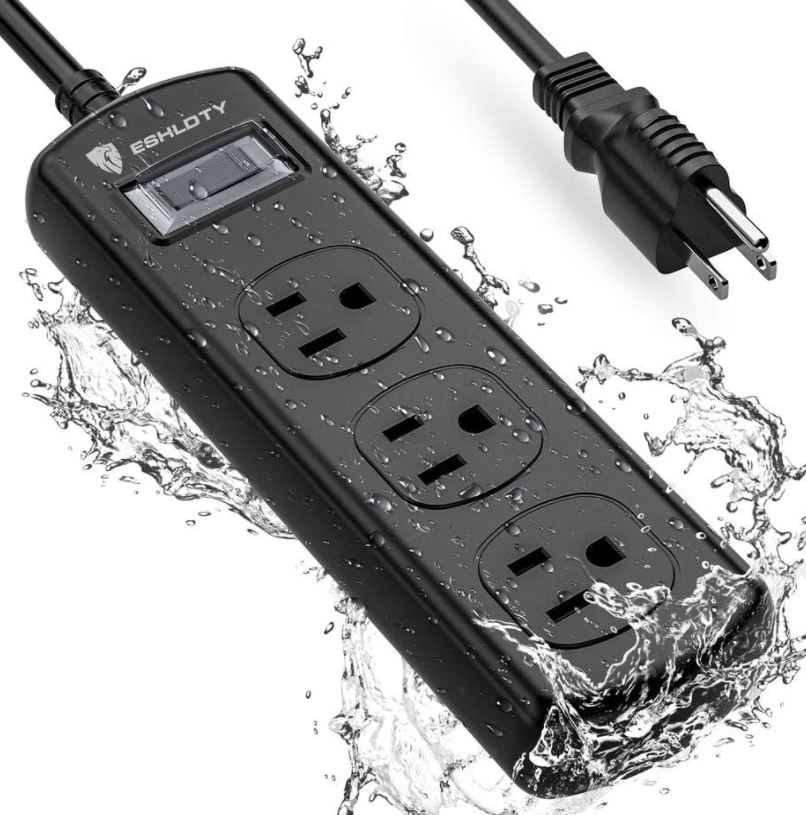 Of all three of our options, the EIGSO Outdoor Power Strip is the closest to a traditional power strip. It’s about seven inches long, with a trio of three-prong outlets sitting side by side. The shell is fire-resistant black polycarbonate, with rounded edges that look as modern as any interior power strip. Alongside the three power outlets, there’s a safety shutoff switch with a red indicator light. This allows you to flick a single switch and turn all three outlets on or off. Attached to the switch side of the power strip is the cord. The cord is available in six or 9.2 feet, depending on the variant you buy. But considering the marginal price difference, the 9.2-foot cord is a better value. 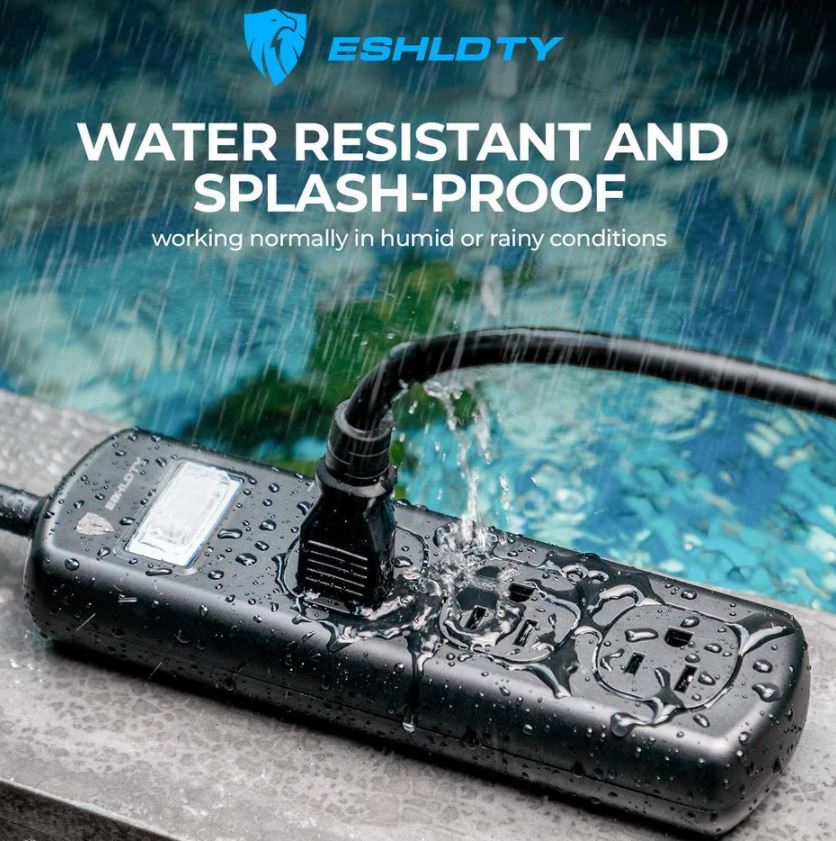 The internal surge protector is designed to protect against even the most powerful of surges. It’s rated to withstand up to 1,500 joules of energy. In mechanical terms, that’s roughly the amount of energy delivered by an assault rifle. The EIGSO surge protector might not be literally bulletproof, but it’s the electrical equipment. Not only that, but it’s safe for kids. Each outlet has internal doors covering the electrical elements. Unless a standard US plug is inserted, no power will be delivered. This is a great safety feature, but it also makes it harder to insert plugs. Don’t worry if you have to push a little harder than you expect to get a plug seated. 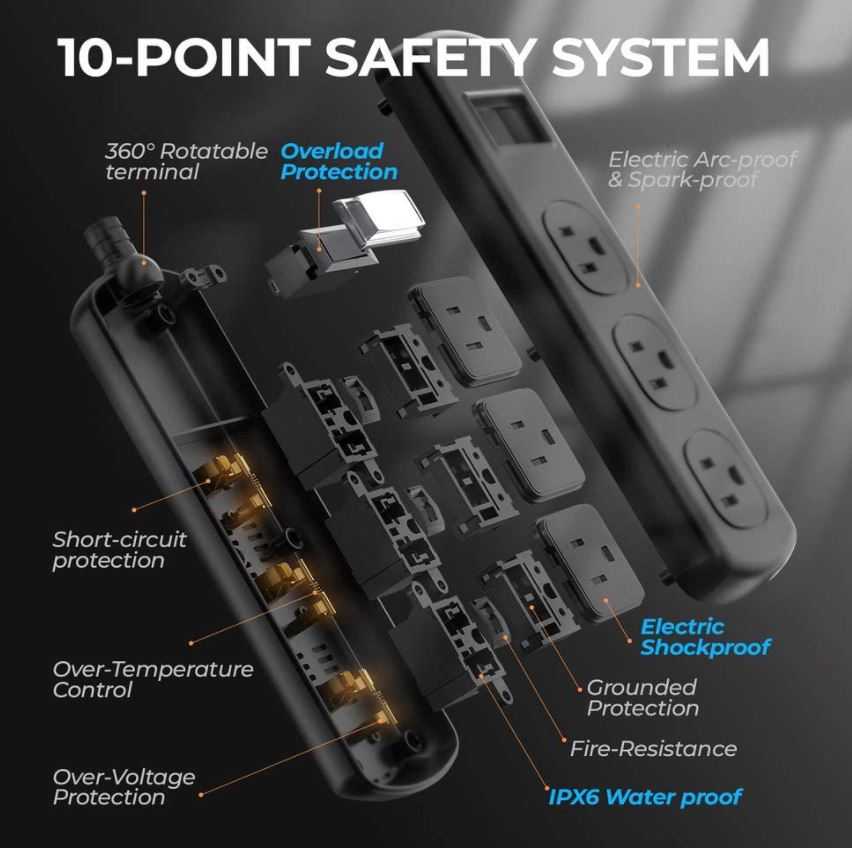 The EIGSO surge protector is IPX6-rated for water-resistance. This is as water-resistant as a piece of electronics can get without being submersion-proof. Even the hardest rain storm won’t cause damage in the outdoors. All of this comes backed by a 12-month manufacturer’s warranty. This is long enough to let you know whether or not the EIGSO power strip works for your purposes. 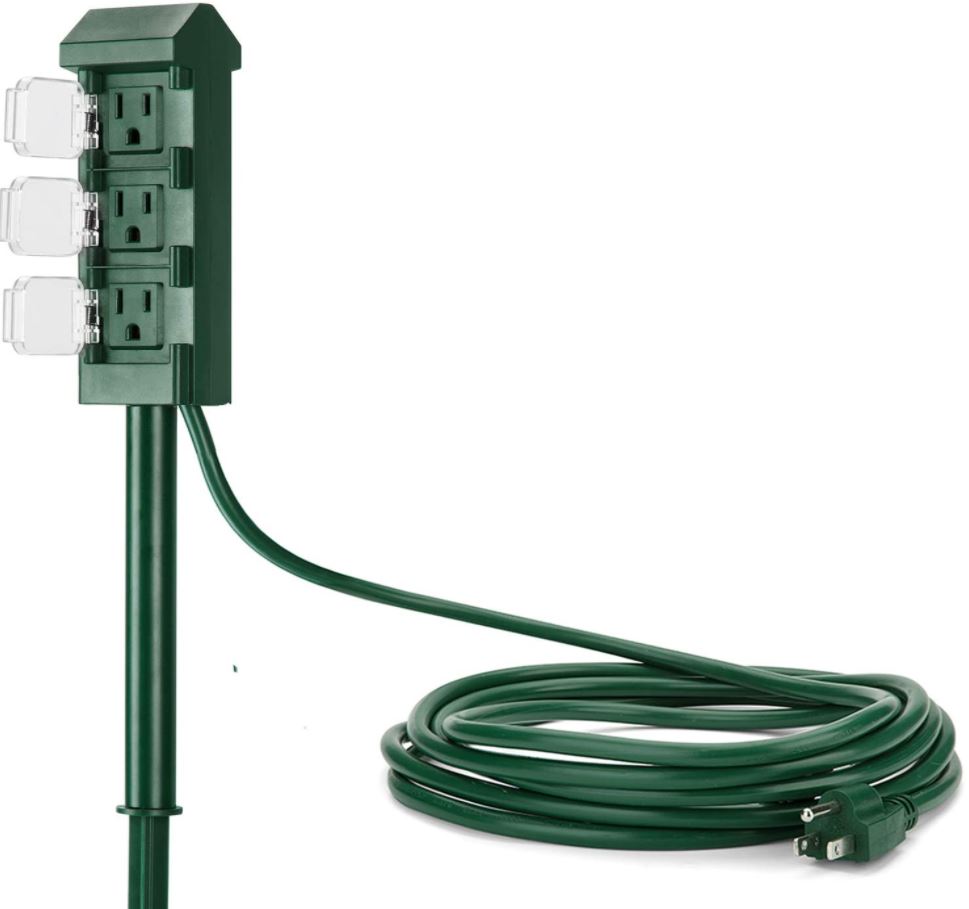 The BESTTEN Outdoor Power Strip is built to blend into your garden. It comes as a three-part unit, which needs to be assembled upon arrival. Thankfully, the three parts simply slide together, so “assembly” takes all of about a minute. The main part of the unit is a three-outlet power strip, with an attractive, birdhouse-style top. Beneath that, there’s a six-inch vertical pole, along with a six-inch ground stake. Put the strip on the pole, put the pole on the stake, and push the stake into the ground wherever it’s needed. Thanks to a 12-foot power cord, placement is easier than many other outdoor power strips. There’s even a spare stake in the package in case you break the first one. 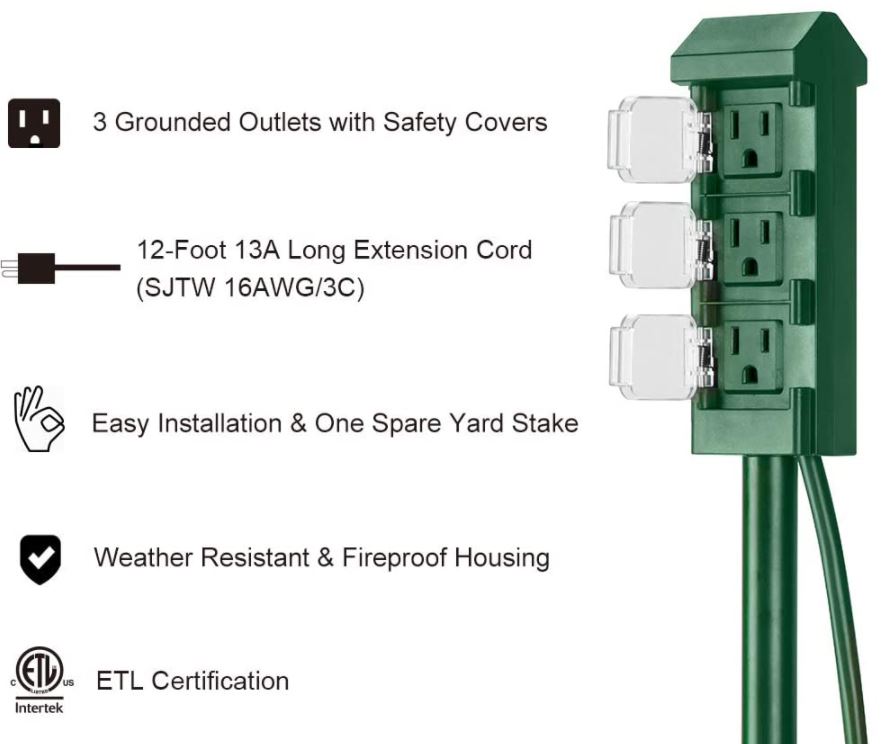 One thing we really liked about the BESTTEN Outdoor Power Strip is its attractive design. It’s green in color, to match your foliage. Even the cord is green, which makes it a great choice for concealing in bushes or a flower bed. If you want to run Christmas lights, but don’t want a bright orange extension cord, you’re likely to be pleased.

Each outlet has its own individual clear plastic safety cover. These covers are spring-loaded, so they stay shut whenever an outlet isn’t in use. As a result, you don’t have to worry much about water infiltration. Moreover, the BESTTEN strip is water-resistant to begin with. On the downside, BESTTEN doesn’t actually provide an IP rating. IP ratings are standard in modern electronics, and it was disappointing not to see one. That said, we haven’t heard about anyone who’s had issues with normal outdoor use. Unless you’re submerging the power strip in water, you shouldn’t have any issues. 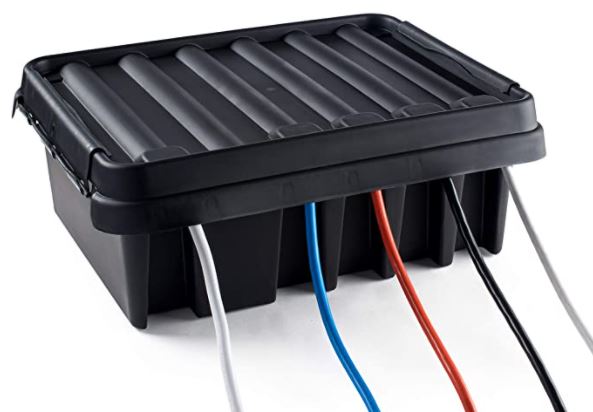 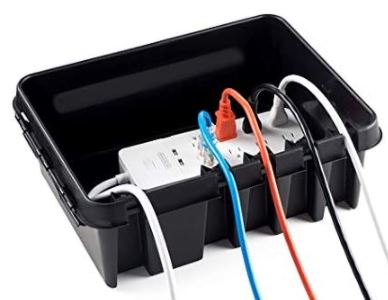 The box is IP55-rated for dust and water-resistance, so it’s safe for ordinary outdoor use. That said, according to the instructions, it’s only designed to be used for “temporary installations.” We’re not sure what that means. A dinner party? A month-long Christmas light display? The most likely guess is that the plastic construction will break down in UV light. After about a year, it starts to get brittle. That said, this itself is a general guideline. It makes a big difference if your box is sitting in the shade versus the sun, for example. 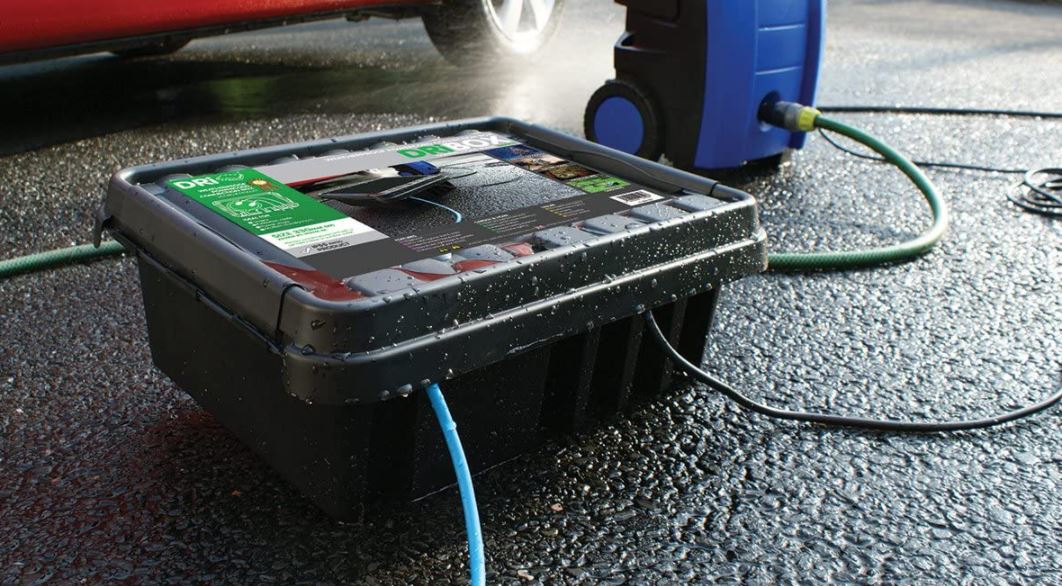 The case is available in black or green, both of which will blend in on the ground in most gardens. The gap under the lid is designed with molded openings to allow you to run cords in and out. The openings are shielded by a shroud that extends down from the top of the lid.
The SOCKiTBOX is available in three sizes. The first two, Large and Medium, will accommodate up to five cables: one incoming, and four outgoing. The only difference is the size.

As you can see, these are all great ways to protect your outdoor electronics. However, they all have their own strengths and weaknesses. We started by looking at the EIGSO Outdoor Power Strip. It’s the closest we saw to an ordinary power strip, so it’s cosmetically-suited for indoor use. On the other hand, the bright red LED can stand out in your garden.

The BESTTEN Outdoor Power Strip is the most concealable of the bunch. With its green color and stake-like design, it’s easy to position and camouflage. The outlet covers are well-engineered, but an official IP rating would have been even better. Last, we looked at the SOCKiTBOX Waterproof Connection Box. It’s not a surge protector, and it’s not even a power strip. But it will protect your indoor surge protector or extension cord connection. For short-term or occasional use, that’s just as good.