In a few months, it’s going to be summer. Time to hit the road and enjoy a family vacation. Of course, this begs an obvious question: how do you keep your kids quiet in the back seat? One way is to use a portable DVD and Blu-ray player, so you can enjoy peace and quiet. But a portable player isn’t just useful for watching the latest Pixar movie. It’s also a great choice if you travel frequently for business. Sure, you could just use your laptop. But you probably need your laptop for work, and want to save batteries. Using a separate device can alleviate this problem.

But how do you choose a well-designed portable DVD and Blu-ray player? You want to look for a few different things. First, you want to look for a rugged, well-engineered design. By nature, this type of device needs to be able to handle the rigors of the road. Secondly, you want compatibility with other devices. This isn’t strictly necessary, but it will make your portable device useful at home as well as on the road. Finally, you want a good battery. If you’re just using it in the car for your kids, you won’t need this. But if you’re on an airplane, you’re going to want to get through at least one or two movies. 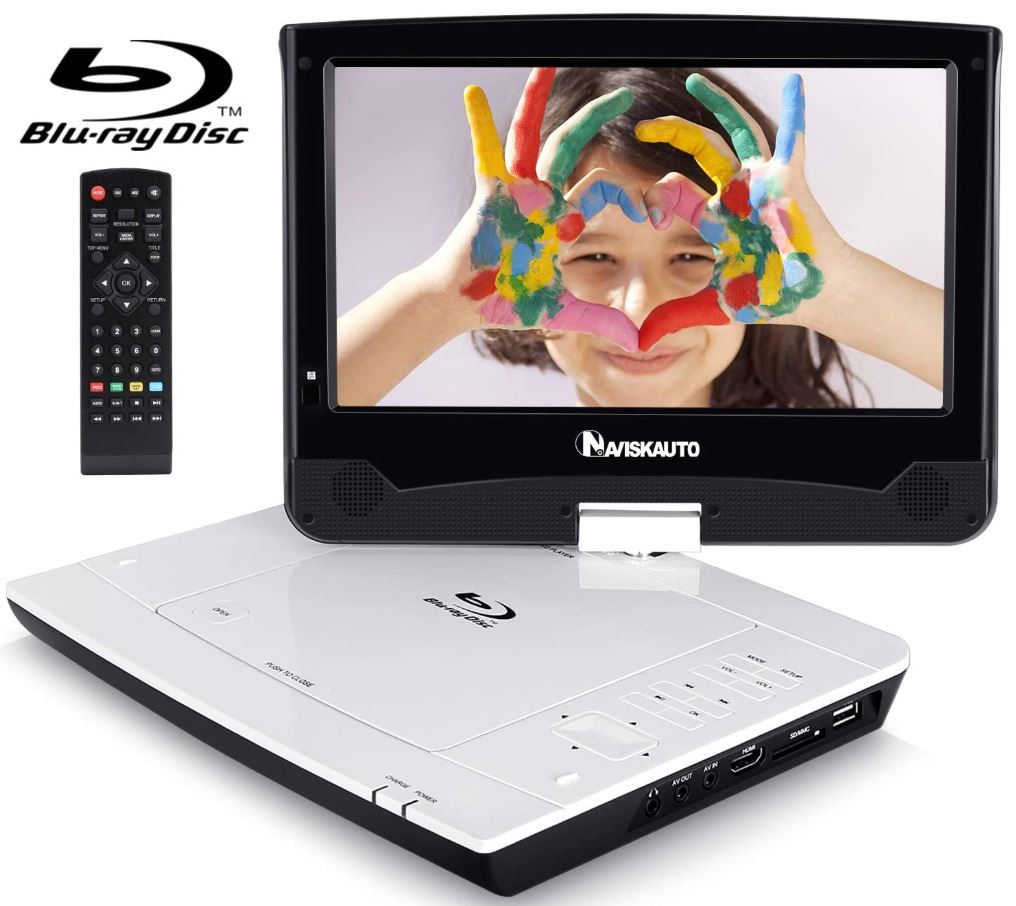 The NAVISKAUTO 12″ Portable Blu Ray Player is designed specifically to be used in your car. This isn’t to say it’s no good for other purposes. It’s simply that it’s ideal for kids to use in the back seat. In addition to a long-lasting battery, there’s also an optional headset mount available. In addition, tabletop or desktop use is also easy. The built-in screen can be rotated 270 degrees, which allows for easy positioning under almost any circumstances. The screen can even be flipped 180 degrees and used like a tablet.

The overall dimensions of the device are roughly 15 inches wide, 10 inches long, and 3 inches thick. These are closed dimensions, not opened dimensions. But for transport and carrying in your carry-on bag, the small size is helpful. The total weight is 4.21 pounds. This is a bit beefy, but not terrible. It’s like carrying a second large laptop along with your supplies.

The design is intuitive and easy to use, with several control buttons located on the surface. These allow for quick, easy operation. If you want to use the player in tablet mode, you won’t have to worry about the controls being obstructed. There’s a remote control included in the kit. In addition, the kit also includes a DC adapter for wall charging, as well as a 12-volt car charger. There’s even an AV cable for connecting to your TV or monitor. NAVISKAUTO guarantees the player for 18 months, so you don’t have to worry about any manufacturer defects. 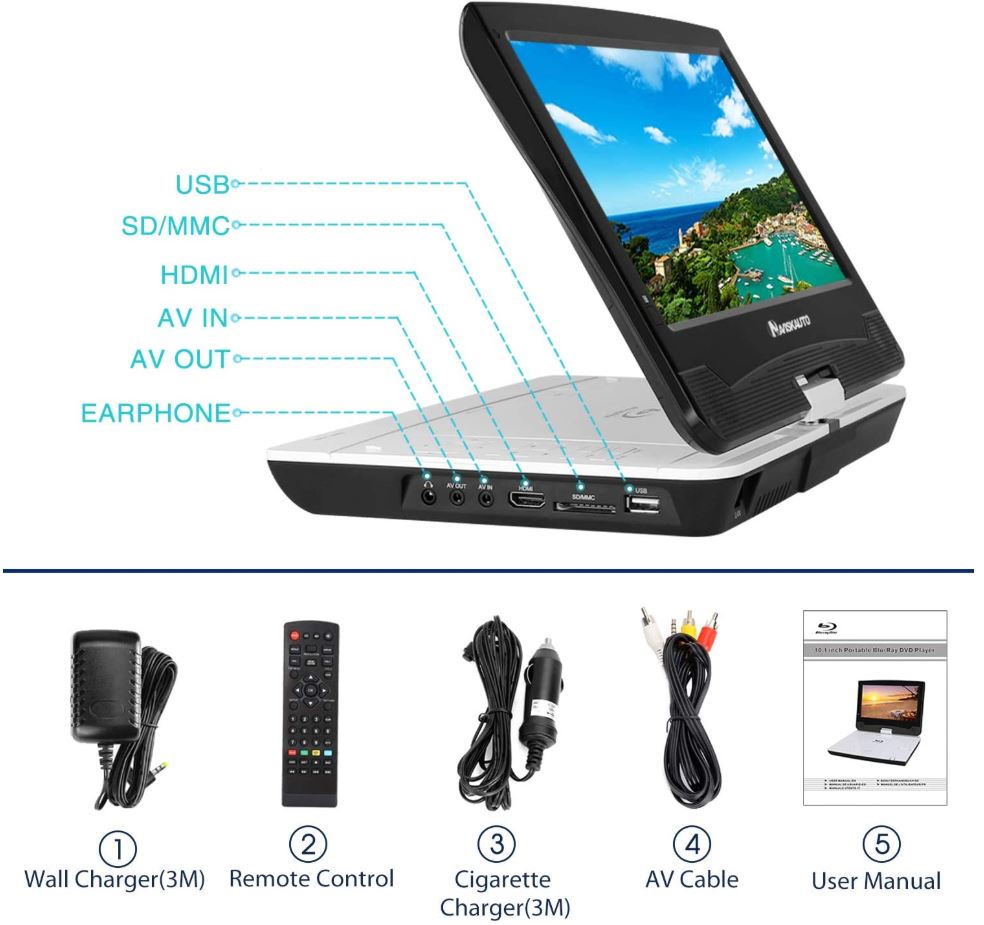 Many portable DVD and Blu-ray players don’t have the same capabilities as a home player. The most annoying feature that’s often missing is the memory/resume function. With the NAVISKAUTO, this is a non-issue. Remove the disc, turn off the player, and it will remember where you stopped. When you turn the player back on, you can resume playing from the same point.

No DVD player is worth buying if the screen quality is sub-par. So how does the NAVISKAUTO stack up? It has a 1024 x 600-pixel display, which is quite good for the size. It would have been nice to see 720p, but in practice, there’s not much difference here. Given the relatively small screen size, it might as well be true HD. The audio quality is reasonably good, not just stereo, but Dolby. As you might expect from a small unit, the speakers are fairly small, and have limited quality. That said, when you plug in a pair of decent headphones, you’ll be blown away by the quality of the audio. 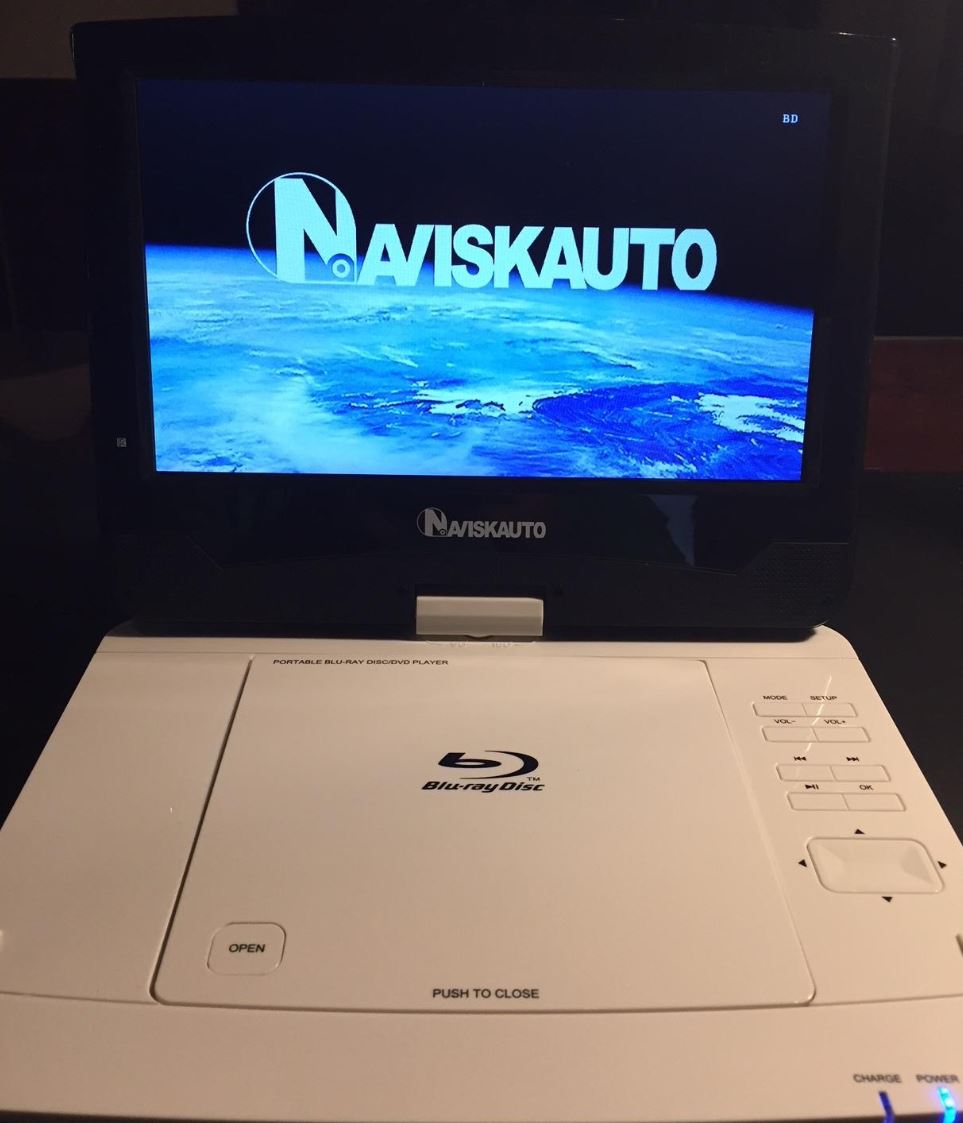 When it comes to compatibility, the NAVISKAUTO player performs very well. It’s not locked to any region for DVDs. For most people, this won’t make much of a difference. But if you’re a fan of foreign films, you’ll be able to watch all the Japanese anime DVDs you want. Blu-ray discs are limited to Region A. This covers North America, most of South America, Japan, and parts of Southeast Asia. That said, you won’t be able to play 4K or 3D Blu-ray discs. In addition to playing videos from discs, you can also play videos and music from a USB or SD card. The card size is limited to 128GB, but that leaves space for plenty of movies.

But suppose you want to watch movies on your TV? No problem. Use an HDMI cable, and you’ll get full 1080p HD on your living room or hotel room TV. You can also connect two NAVISKAUTO players together with the AV cable. This allows you to play the same disc on both screens at the same time. If you have two kids in the back seat, this will keep them from fighting over a single screen. 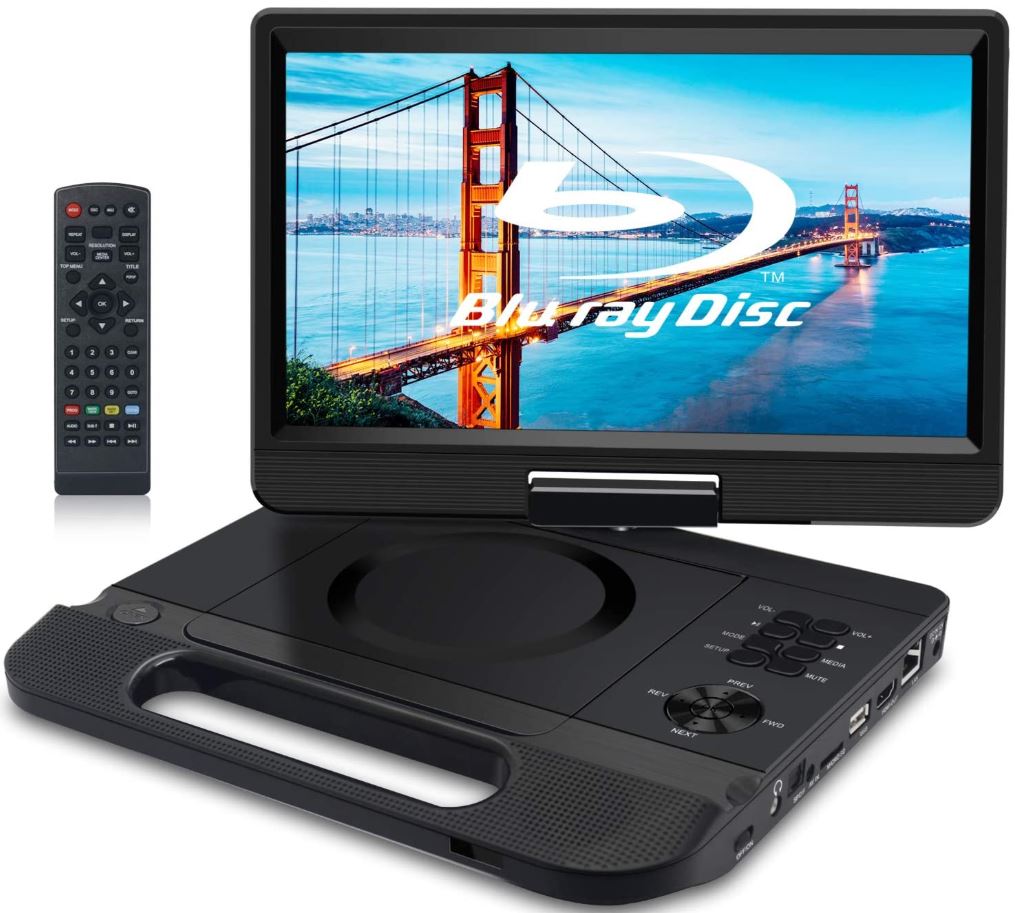 The FANGOR 10.1” Portable Blu-Ray Player is a bit bulkier than the NAVISKAUTO player. It measures 14.2 inches wide, 10 inches deep, and 2.9 inches thick. That said, the overall weight is actually light, at slightly less than 4 pounds. And part of the expanded size adds extra functionality. There’s a built-in handle on the front, which makes the FANGOR easy to carry. Like the NAVISKAUTO, the FANGOR can be used in a variety of configurations. The screen swivels 270 degrees, which makes it easy to position for viewing from any angle. And like the NAVISKAUTO, it can be flipped 180 degrees and used like a tablet.

The case is constructed from sturdy black ABS plastic, with speakers towards the front by the handle. In addition to manual controls, you also get a remote control. The kit also includes a DC power adapter, car charger, AV able, and an owner’s manual. Throw in a 12-month manufacturer’s warranty to protect you from defects, and you’ve got an excellent product package. Not that you’ll need the warranty. The FANGOR is shock-resistant. 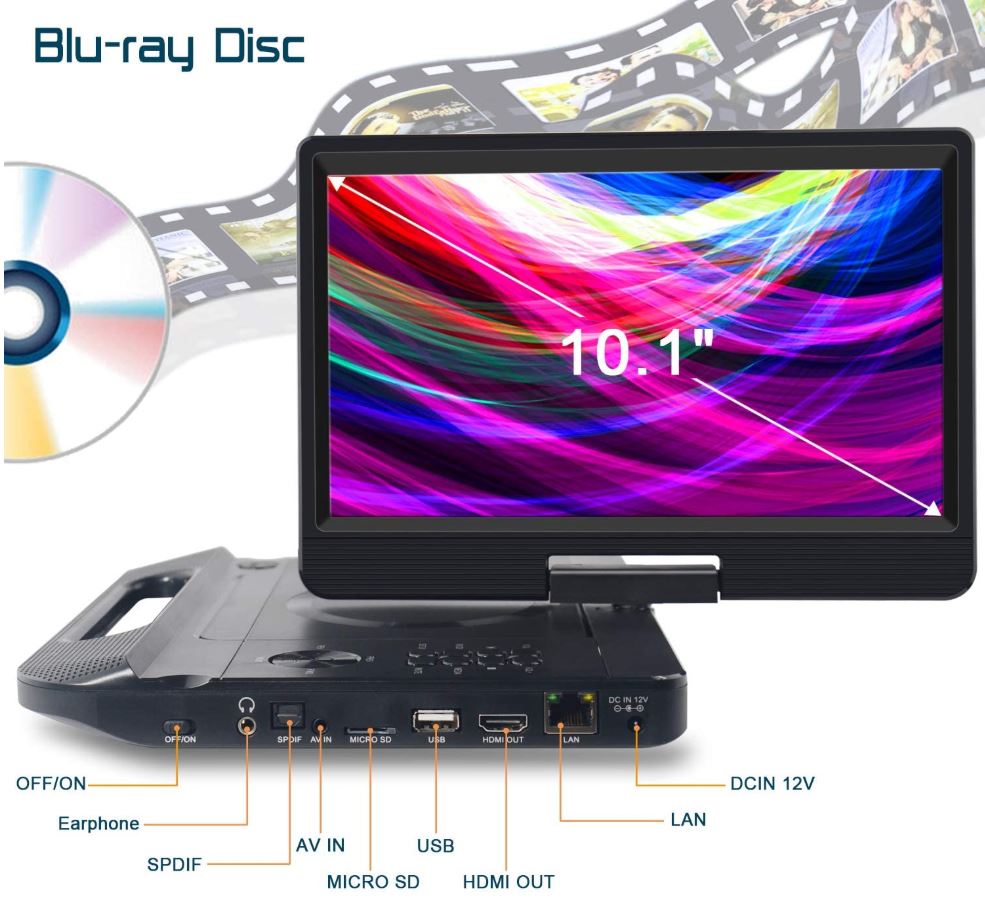 In addition to standard playback, the FANGOR also provides several extra options. There’s a slow-motion function, as well as a zoom function. There’s also a memory function, much like the NAVISKAUTO offers. If you have to stop playback in the middle of a movie, you won’t have to fast forward to find your place.

Like the NAVISKAUTO player, the FANGOR’s screen has a resolution of 1024 x 600 pixels. Once again, at this size, that’s essentially the same as HD. You’ll think you were watching a gorgeous big screen TV. The audio quality is about what you’d expect from a small set of speakers. That says, there’s only basic 2-channel stereo. If you’re wearing headphones, you’ll get louder volume, but the quality won’t be as good as Dolby. 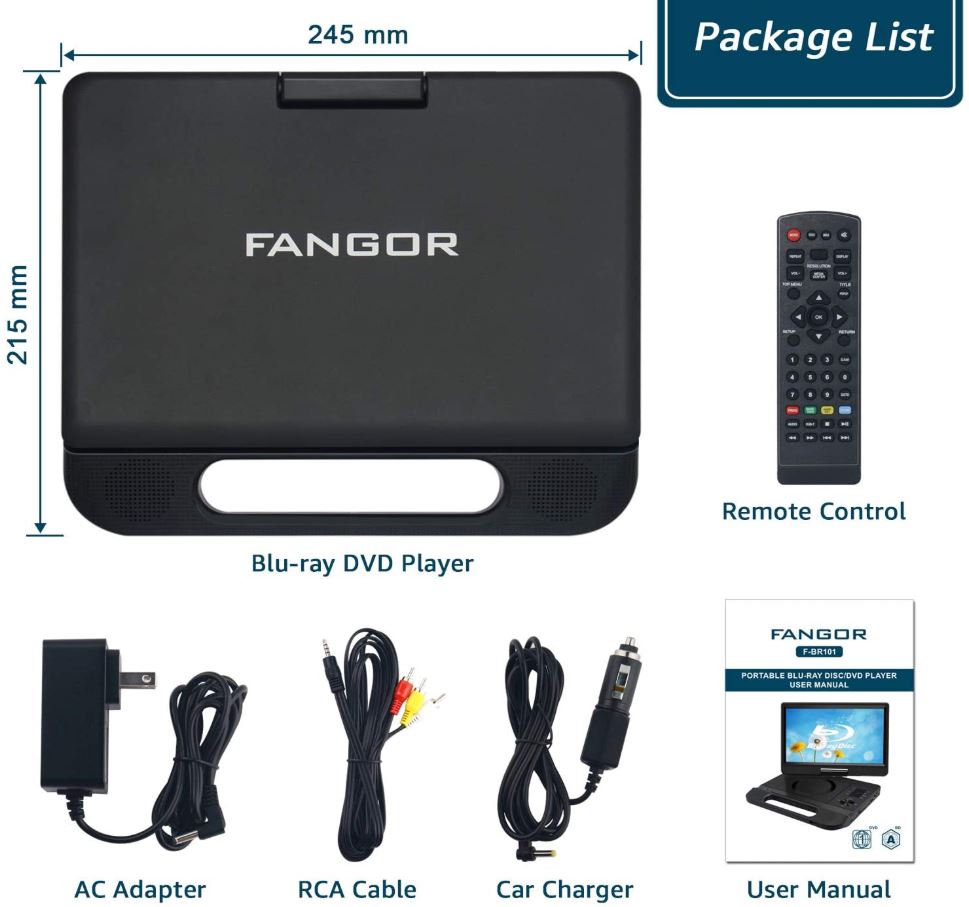 The FANGOR player offers region-free DVD playback, as well as Region A Blu-ray playback. Like the NAVISKAUTO, it doesn’t support 4K or 3D Blu-ray discs. It does support USB and SD cards, although the maximum size is limited to 32GB. When connected to a TV via HDMI cable, it will play video in full 1080p.

The FANGOR 10.1” Portable Blu-Ray Player has a built-in 3,800mAh battery. This will get you up to 3 hours of DVD playback, which is a bit underwhelming. Blu-ray playback times are a bit shorter, but still long enough that you can get through most movies. And when you’re plugged in, you can watch for as long as you like. 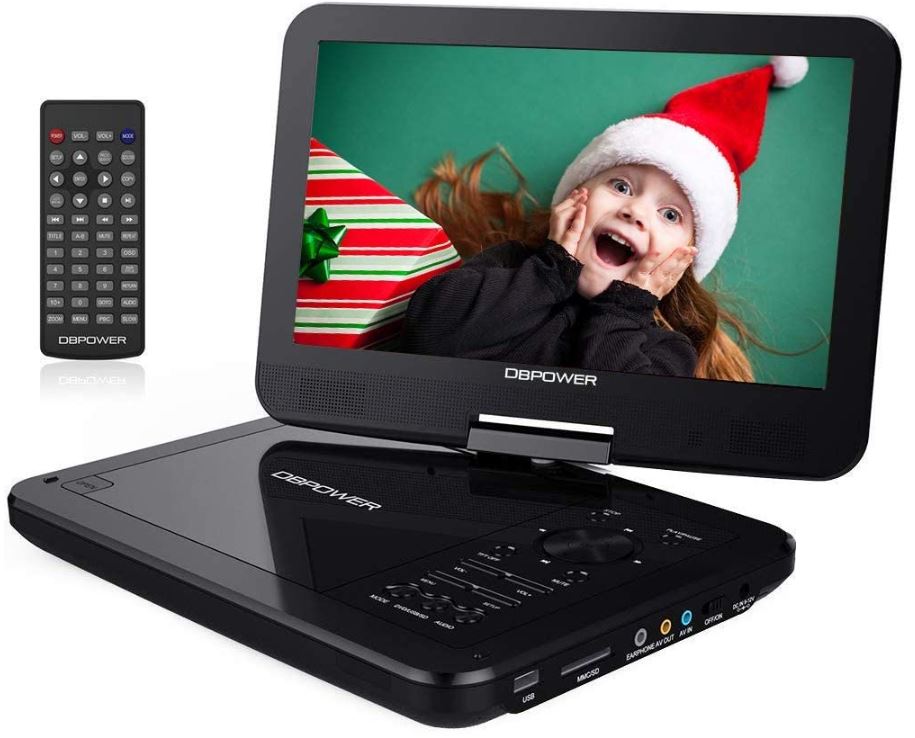 The DBPOWER 12” Portable DVD Player is designed to be an affordable alternative to other options. On the one hand, this means you can save money while prepping for your family vacation. On the other hand, it means you’ll get fewer features. The case is available both in black and in a fun blue finish. It measures 12 inches wide, 7.2 inches deep, and 1.6 inches thick, and weighs 3.25 pounds.

The 10-inch screen swivels 270 degrees, and can also be flipped over like a tablet. In addition to the player itself, you’ll receive a DC adapter and a car charger. Battery life is no issue when you can stay plugged in. You also get a 1-year manufacturer’s warranty that covers defects in parts and labor. This ensures you’ll be protected from any factory defects. 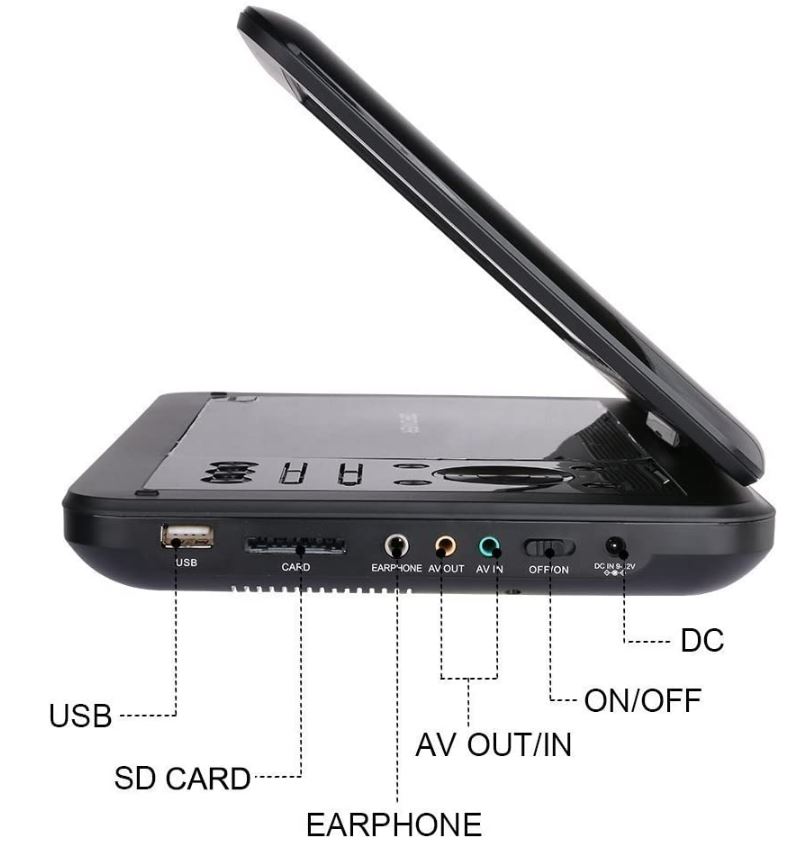 Like the other DVD players on our list, the DBPOWER has a screen resolution of 1024 x 600 pixels. This is more than good enough for the size, and you won’t have any complaints. That said, the speakers have a very low maximum volume. Even when it’s cranked all the way up, it can be tough to hear over traffic noise. Make sure to buy a pair of headphones for your kid. 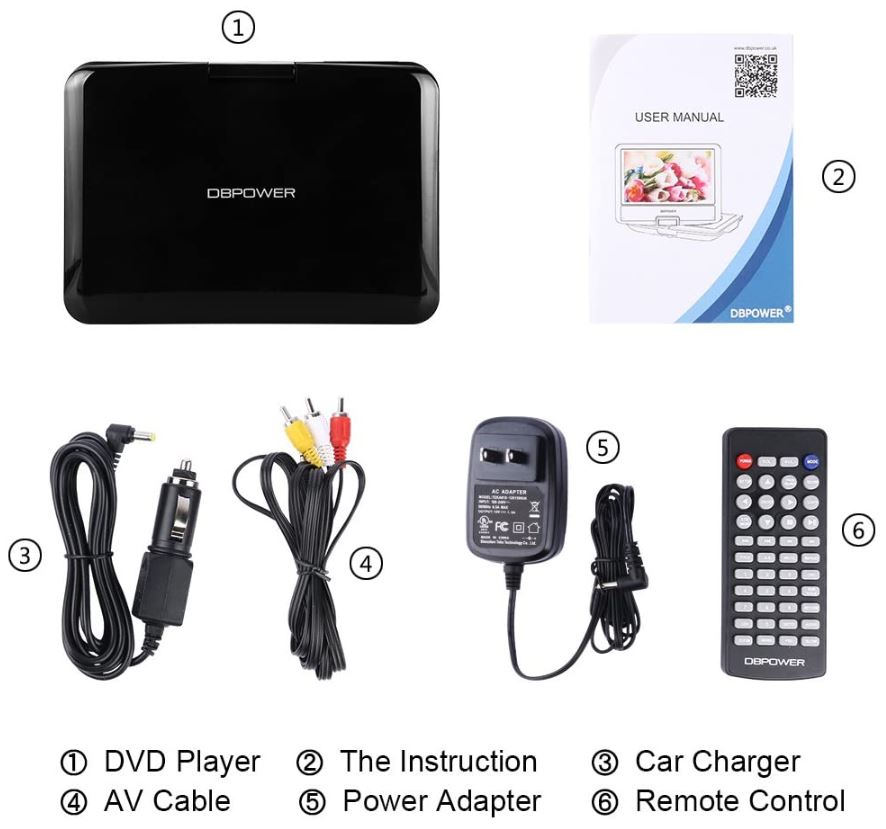 The DBPOWER player supports playback of CDs, DVDs, and even CD-R/RW and DVD +/-R/RW. However, you won’t be able to play back Blu-ray discs. DVD playback is region-free, so you don’t need to worry about restrictions on foreign films. If you prefer different formats, you can also play back video from a USB or SD card. Keep in mind, though, that the maximum size is 32GB, and the maximum resolution is 720 x 576.

So, which one of these players is the best of the bunch? If you want maximum compatibility, the NAVISKAUTO 12″ Portable Blu Ray Player is our choice. It supports HD upscaling as well as shared playback. And the support for 128GB USB players is a nice touch.

For portability, the FANGOR 10.1″ Portable Blu-Ray Player is the best choice. The built-in handle makes it easy to carry. And it still supports Blu-ray playback, although the battery life is relatively limited.

Finally, there’s the DBPOWER 12″ Portable DVD Player, which is very affordable. That said, it comes with commensurately fewer features. For example, there’s no HDMI port, and there’s no support for Blu-ray playback. But if you want to save a few bucks, it’s a great choice.