The PlayStation 4 is the fourth best-selling video game console of all time. First released in 2013, it sold 117.2 million units over the course of its production.

And while it’s since been replaced in Sony’s lineup by the PlayStation 5, it still has a lot of life in it. Games like God of War, Ghosts of Tsushima, and The Witcher 3 remain incredibly relevant.

But it’s probably been a few years since your PS4 rolled off the assembly line. In the interim, it’s experienced wear and tear. Eventually, individual components will begin to fail. The disc drive is a common point of failure, because it has moving parts.

But the HDMI port can also fail well before the rest of the system. Each time you plug or unplug a cable, it puts a bit of strain on the port.

Do this enough times, and one of the pins will fail. At that point, your HDMI port will be broken. And without your HDMI port, you have no way to connect your PS4 to your TV. 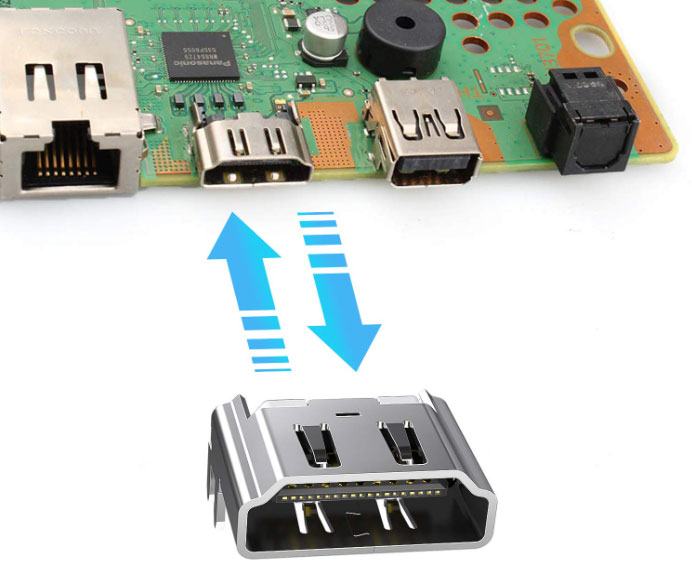 Thankfully, you don’t have to throw out your console and buy a replacement. Instead, you can replace your old, broken HDMI port with a brand new one, and save a bundle of cash.

We’re about to review four of the best replacement HDMI ports for your PS4, PS4 Slim, or PS4 Pro. We’ll also talk about how to diagnose your PS4 in the first place, and determine whether your port is broken. Let’s get started! 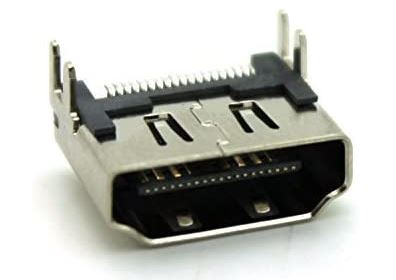 The Mcdectech Replacement PS4 HDMI Port is a single female port that’s designed for the PlayStation 4. It has an all-metal frame and housing, so there are no cheap plastic parts to break.

It also has a set of flanges for mounting to the motherboard. This makes it (relatively) easy to install compared to a generic HDMI port. Just keep in mind that you’ll still have to do some soldering. It may be wise to have a professional do the job. 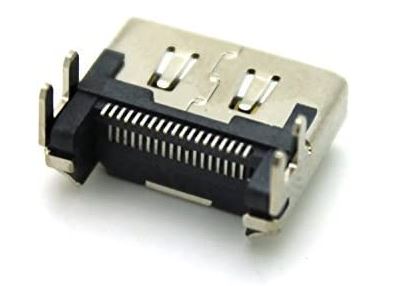 This HDMI port is designed specifically for the original PlayStation 4. In theory, you could jury rig it to work in a PS4 Slim or PS4 Pro, but it wouldn’t be worth it. You’d also risk causing further damage to your system. Just stick with the ports that are designed for your specific PS4. 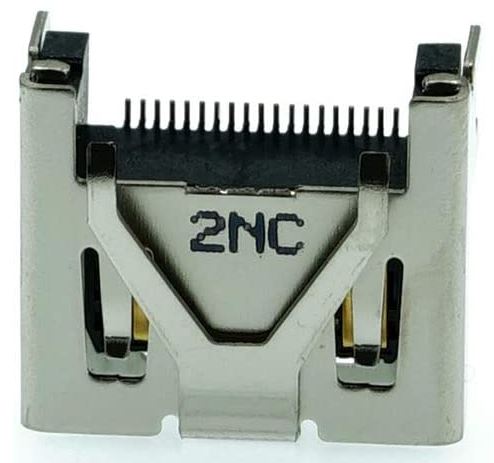 The PartEGG Replacement PS4 Slim & Pro HDMI Socket Port is superficially similar. It has an all-metal frame, with the same mounting flanges and pins for the motherboard.

However, if you look closer, you’ll see that the frame is a bit different. On the top side, it has a Y-shaped tab, rather than two parallel ridges. It’s a minor detail, but it affects how the port fits into your console. 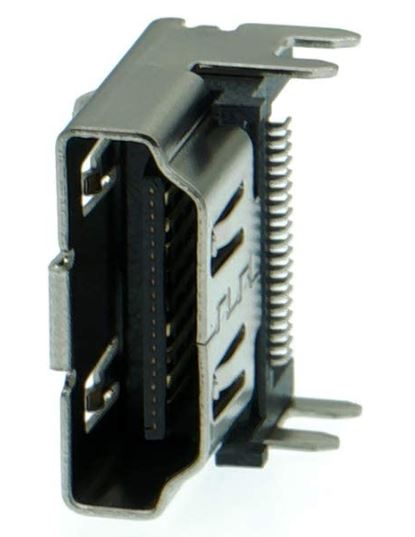 The reason for this difference is that the PartEGG port is designed for the PS4 Slim and PS4 Pro. You’d have to modify it to get it to fit in a regular PS4 console, which would be less than ideal. It’s not a true OEM HDMI port, but it comes pretty close. 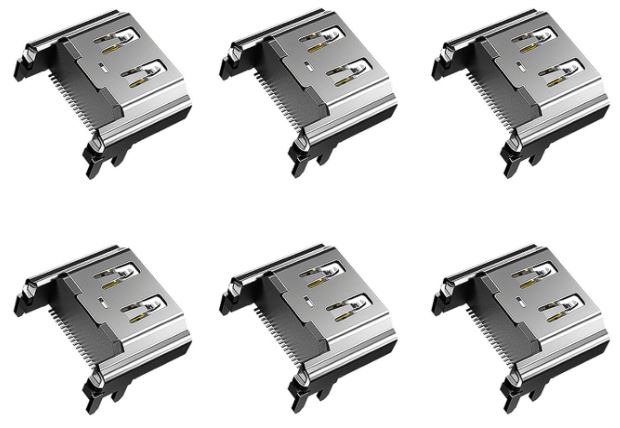 ZIYUETEK is well-known for their ports and cables. Not long ago, we reviewed their USB data blocker. It’s a little USB charging cable that prevents data transfer to keep your phone safe. It left us impressed, so we were eager to find out what else they were capable of.

As it turns out, they manufacture the OEM HDMI port for the original PlayStation 4. It’s designed specifically for that system, and will be indistinguishable from the factory port. That said, it will not fin in your PS4 Slim or PS4 Pro. It’s too fat. 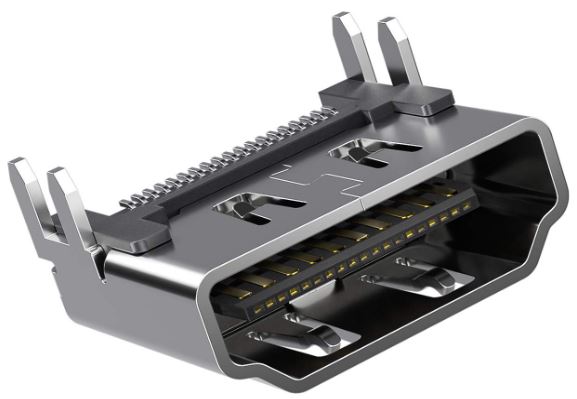 The ZIYUETEK PS4 HDMI Port Socket 6-pack isn’t just a single port, either. As the name implies, you get six ports, which makes them extremely affordable. That’s great news if you’re a professional – or a hobbyist who works on a lot of consoles. But if you’re just trying to fix your own console, six HDMI ports is probably overkill. 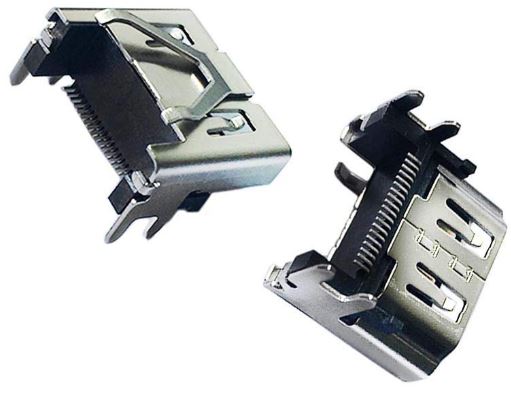 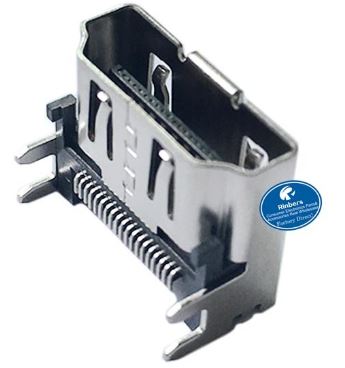 Because it’s OEM, it will perform identically to your original HDMI port. Note that it will not work with your original PS4. But that’s what some of the other ports are for!

How to Diagnose Your PS4 HDMI Port

Replacing your PS4’s HDMI port is a pain. Before you go to those lengths, you probably want to make sure that your HDMI port is actually defective. First things first. If your TV is black, distorted, or says something like “no signal,” check the light on the console.

If the light is blue, there’s nothing wrong with your HDMI port. It could be any number of things, including a defective HDMI cable. It could also mean that your display doesn’t support your PlayStation 4. For example, you might be sending a 1080p signal to a 720p TV that doesn’t support downscaling.

If your console’s light is white, you’re seeing the White Light of Death. It means that either your HDMI port or HDMI controller chip has failed. So, how do you know which it is?

The good news is that damage to the HDMI port will typically be visible. Use a flashlight to check your port for dust and debris. Check the condition of the pins, and make sure they’re all intact. And make sure you’re able to fully insert your cable. If the metal housing has become deformed, your cable may not be able to make good contact.

There may also be physical damage on the inside of the machine. You’ll have to open your PS4 housing and check the pins on the back of the port where they meet the motherboard. If none of the pins are burnt out and the solder is intact, the issue is probably your HDMI controller chip.

What Causes Damage to a PS4’s HDMI Port?

The main cause of damage to the HDMI port is the design itself. Sony is known for their engineering genius, but they dropped the ball on this one.

The HDMI port on the PS4 isn’t very sturdy, and wears out more easily than most HDMI ports. This problem is particularly bad on first-generation PlayStation 4 consoles. That said, here are some factors that could cause premature wear: 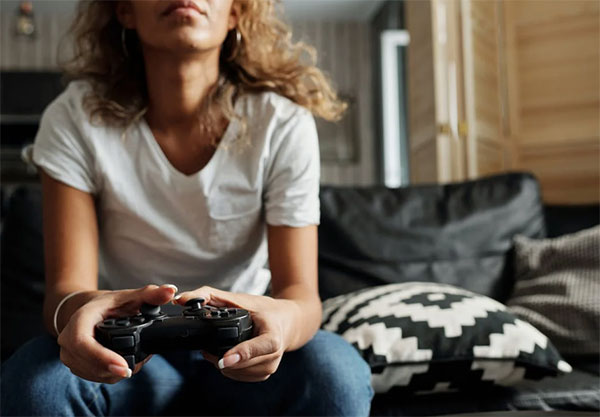 Can You Replace Your Own PS4 HDMI Port?

You can replace your own PS4 HDMI port if you want to. But you’ll need access to a soldering iron and good quality flux core solder. You’ll also need to have steady hands and good soldering skills.

It’s not a challenging job in the sense of being complicated. You just have to solder a row of matching pins together. But if your soldering game isn’t top-notch, it’s easy to damage your circuit board. One slip of the iron, and your whole console could be bricked.

If you’re inexperienced, you’d be best served taking your console to a local repair shop. Then again, maybe you’re trying to learn and you don’t care if you brick your console. In that case, there’s nothing wrong with giving it a try for yourself.

So, which one of these replacement PS4 HDMI ports is the ideal choice for you? As you can see, it largely depends on which version of the PS4 you’re using. That said, there are a few differences worth pointing out.

We started out by looking at the Mcdectech Replacement PS4 HDMI Port. This port more or less mimics the design of the OEM PS4 HDMI port. We had some concerns about the brand’s quality control, but our port worked just fine. Besides which, it’s an incredibly affordable part.

Next, we reviewed the PartEGG Replacement PS4 Slim & Pro HDMI Socket Port. This is similar to the Mcdectech port in that it’s meant to copy the OEM port. It does a great job and works well once it’s installed. But it’s designed for the PS4 Slim and Pro, not the original console.

After that, we evaluated the ZIYUETEK PS4 HDMI Port Socket 6-pack. This is the OEM replacement port for the original PS4, and offers identical performance. Since it comes in a six-pack, it’s a great value for people who are working on multiple consoles. But if you’re just fixing one console, it might be a bit much.

Finally, we checked out the Rinbers PS4 Pro & Slim HDMI Port. As the official OEM port for the PS4 Pro and PS4 Slim, this is the optimal choice for those systems. It’s marginally more costly than the PartEGG port, but at these prices, we’re talking about an inconsequential difference.