Creative implementation of Raspberry Pi can be incredibly cool. You might use Pi for something as simple as running a word processor. Or you might use it to help coordinate your garage door with a Wi-Fi network, to connect with a DSLR camera, or even for animatronics.

Whatever project you have in mind, a smartly rigged Raspberry Pi kit has few limits. Whether you’re learning to code, exploring applied computing, or trying to achieve some type of practical effect, Pi presents literally millions of different opportunities.

Having narrowed your selection to a Model B+, you’ve already made a number of decisions about the speed and memory capacity of your build. For a project that didn’t require networking capabilities, you’d want to move to Model A. For a project with extreme cost restraints, you’d want a model Zero. 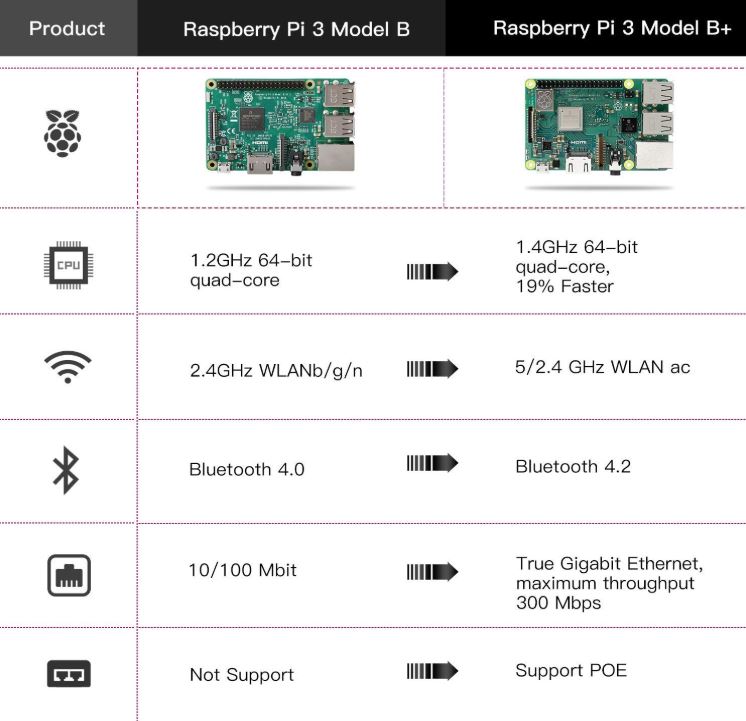 There are some emergent differences when you start to look at I/O ports. The Raspberry Pi 3 Model B+ is pretty good when it comes to connectivity and networking power. But occasionally you’ll find a starter kit is built with extra connection headers, or even with fewer than expected. You have to keep your eyes out for that kind of thing, especially when looking for cheaper Pi 3 starter kits.

Materials in the Kit

Starter kits tend to be pretty inexpensive. But once you start to think about the kind of extras you’ll need for your project, the cost of Model B+ kits can go way up. Think of it this way. Starter kits are not all-in-one kits. Instead, they’re made to help you get started.

Consequently, don’t look for starter kits to contain something like a display unit. If your project requires a display, or requires some kind of extra hub, then you’ll probably need to get it separately. That’s where your costs can start to increase, and where some people are driven to try a Pi Zero instead.

Having to do your data transfer through SD cards or wired connections isn’t that bad. But it’s much more convenient to be able to connect with your Raspberry Pi through a wireless network connection. Fortunately, absolutely all of the best Raspberry Pi 3 Model B+ Starter Kits will include a solid wireless card. Though if you’re not paying attention, you may end up purchasing a slightly older Wi-Fi chipset based on architecture from 2017. 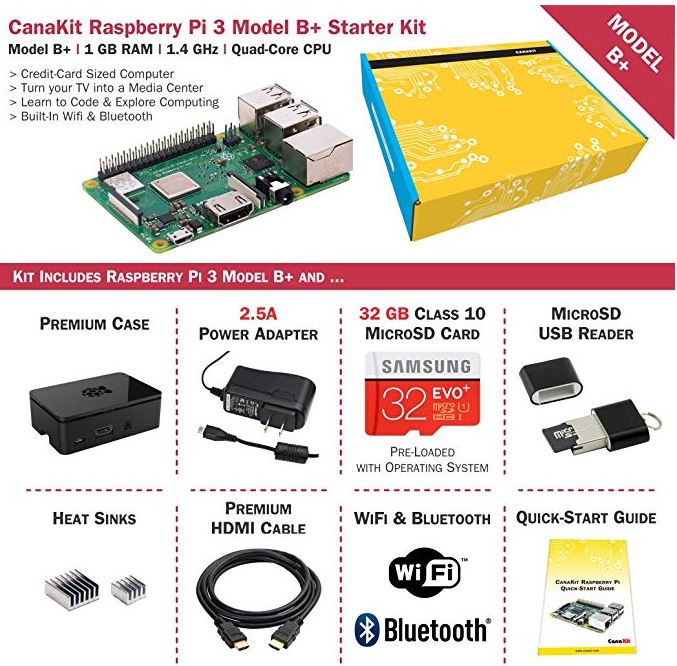 The CannaKit Raspberry Pi 3 B+ Starter Kit is a pretty basic starter kit. Around the $100 price point, you’ll only find about half a dozen kits that can really compare to this one. Dollar for dollar, it’s easy to see how much value is in this kit.

True to its nature as a starter kit, it includes the B+ case, a pair of heat sinks, HDMI cable, GPIO reference card, and a CanaKit Full Color Quick Start Guide. It also includes a 32GB microSD card and microSD card reader. The SD card is actually a Samsung EVO+ Class 10 card that’s been pre-loaded with NOOBS, but you can replace that with another OS as needed. 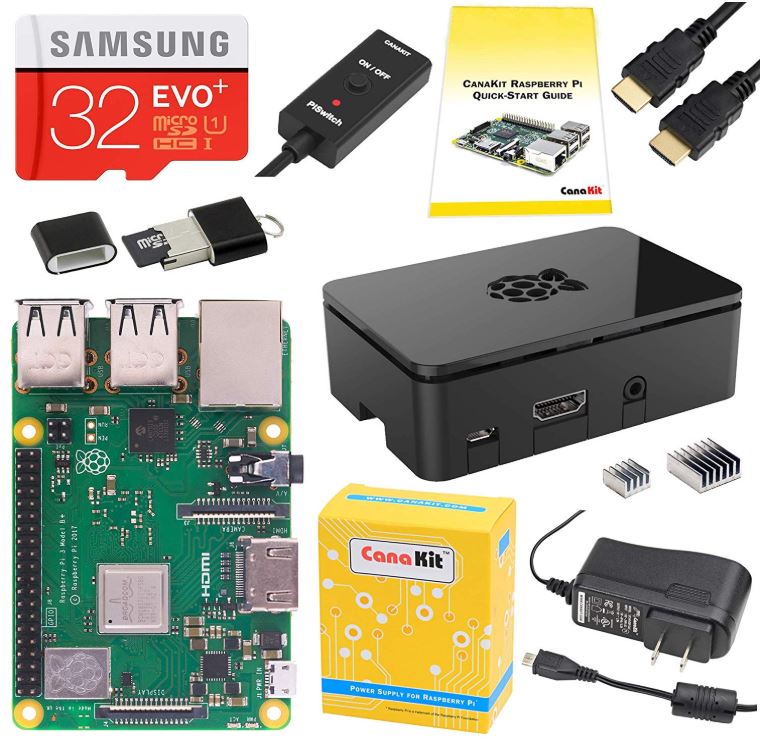 If you couldn’t tell from its name, the CanaKit includes a Raspberry Pi 3 B+. The hardware is everything you’d expect from Model B+ starter kit. More specifically, you’re looking at a 1.4 GHz quad core processor that’s been paired with 1GB RAM. Just enough power to drive content through the included HDMI port — though perhaps not HD content at higher frame rates.

The aluminum case has a shiny black exterior. The topside uses a glossy finish, while the bottom is mostly matte plastic. This particularly mixture of components is pretty good at dissipating heat, which can be necessary for really taking advantage of this kind of computing power. But admittedly, the glossy components are pretty bad about collecting fingerprints. 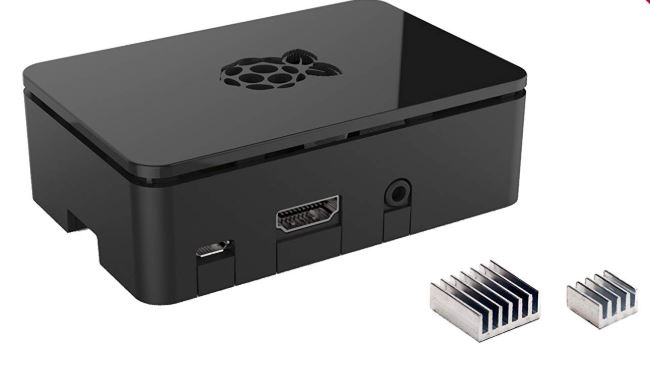 Adjacent to the processor and memory module, you’ll find a network hub. From there, you can use a dual band 2.4GHz wireless connection to get full wireless speeds. That includes support for the 5G band. But people who want wired connection through Ethernet will need to purchase a PoE hat separately.

As mentioned earlier, the CanaKit includes a quick start guide. If you’ve built a couple Raspberry Pi projects before, then you probably won’t need to use the guide. But it can be quite informative for people who are constructing their first project with a Model B+. 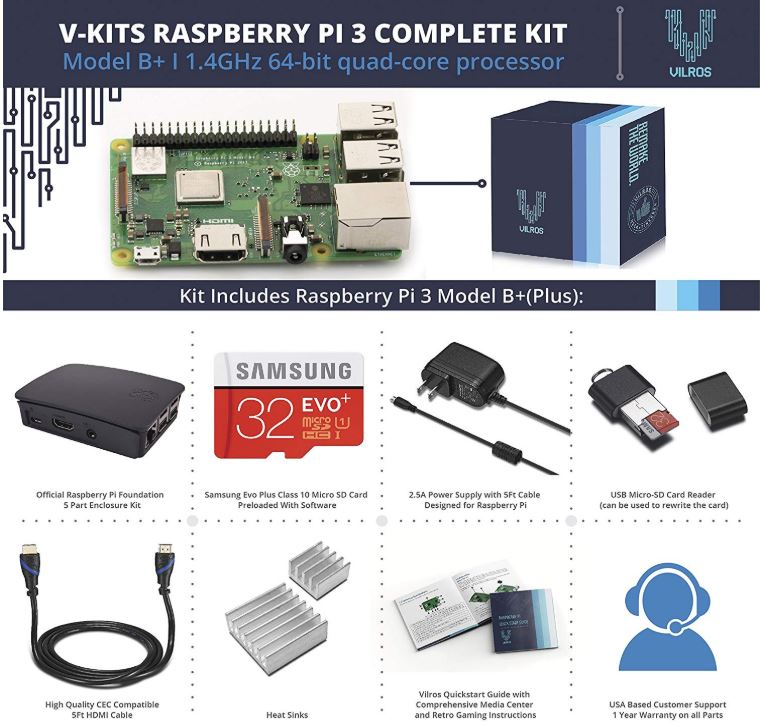 Vilros V-Kits Raspberry Pi 3 Starter Kit doesn’t get much glory. It certainly doesn’t get as much credit as it deserves. But similar to the CanaKit, dollar for dollar, this is one of the cheapest ways to start a Raspberry Pi project. But as usual, you may need to get some extra accessories on your own, depending on the kind of project you are looking to pursue.

This kit includes a UL certified 2.5A USB power supply, HDMI cable, and micro USB cable. All of those components were made specifically for the Raspberry Pi 3, which means the USB cable can actually carry 2.5A. It also includes a pair of heatsinks. The heatsinks don’t include much thermal paste for application. But on the bright side, there’s some adhesive on their bottom side that works pretty well. 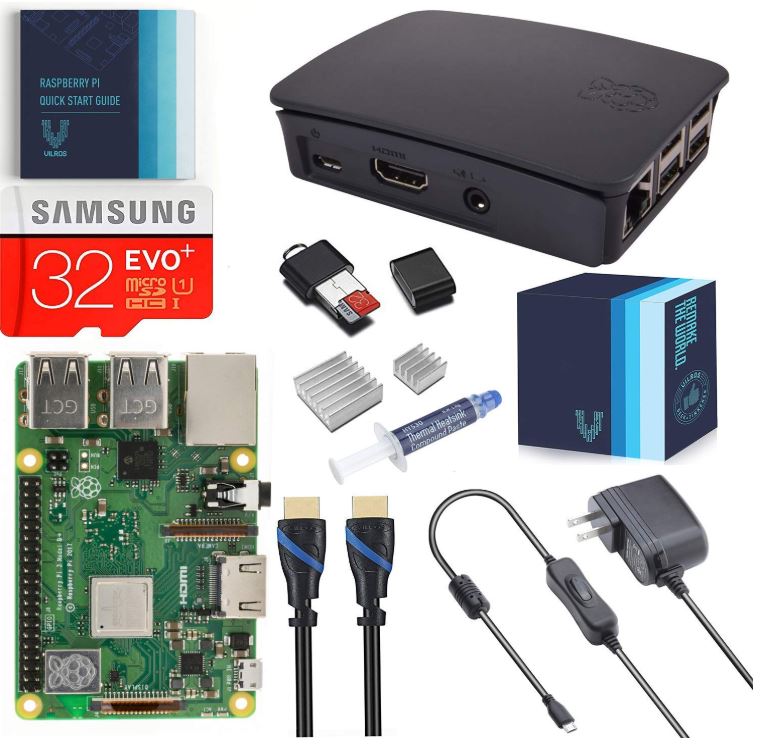 For storage, this kit includes 32GB Samsung EVO Plus SD card. It’s a class ten card, built for being written and rewritten continuously. For an operating system, the card comes preloaded with a copy of NOOBS. But the USB adapter can be used to re-write the SD card as needed.

You may remember the Model B+ was originally released back towards the start of 2018. V-Kits includes a Raspberry Pi 3 Model B+ constructed with all the latest digital architecture. It’s built around a formidable Broadcom BCM2837B0 and Cortex-AF3. Compete with a 1.4GHz processor, this kit is capable of driving any number of different projects.

The official Raspberry Pi black enclosure was made with plenty of thought. The port placement is quite smart. If you’re looking through the spec sheet and you find yourself thinking that 1GB LPDDR2 SDRAM doesn’t sound like much, don’t fret. These components were selected they’re all pretty proportional to each other. You aren’t going to encounter many unilateral bottlenecks from a Raspberry Pi 3 Model B+.

However, you may encounter some limitations when trying to move large quantities of data. Support for four USB 2.0 ports means data throughput is effectively caped at 300Mbps. You’ll find similar limits when moving data across wireless connections, unless you’re taking advantage of 5G. Fortunately, this kit does support 5G connections for people who need it. 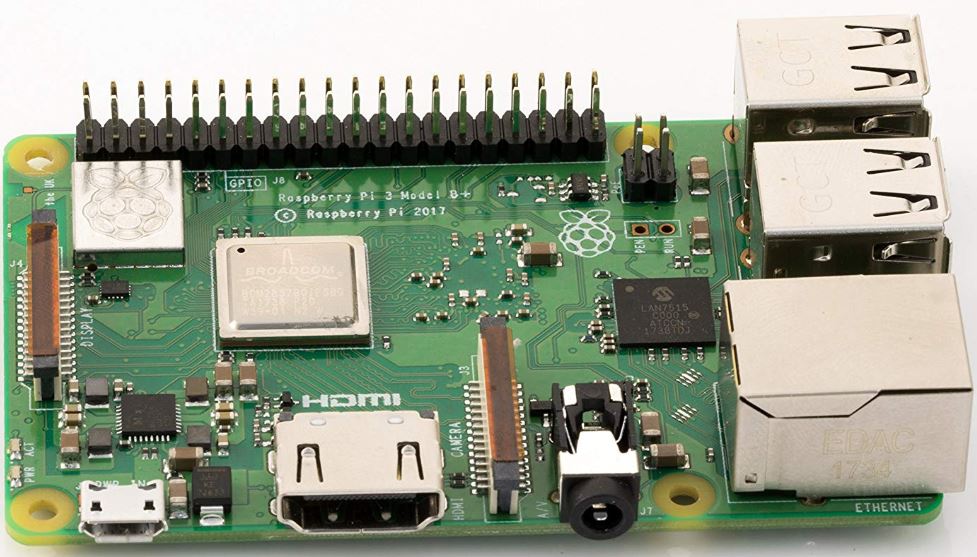 Input power for this kit is a 5V/2.5A DC power connection made using a USB wire. Internally, a 5V DC GPIO header can power everything up. Alternatively, you can use Power over Ethernet. But you’ll need a separate PoE HAT capable of running 3B+.

Depending on your project, you might need a display. A display is not included. Given this device includes HDMI cable, you might assume it could handle pushing 1080p HDMI signals. But in reality, not so much. You need to drop your signal’s framerate towards 30fps, or lower the output to 720p resolution. From there, you can start to make use of the HDMI connection.

The Vilros V-Kits Starter Kit includes a one-year warranty. They also include unlimited support from their tech support staff. Their support staff is American based, for people who care about that sort of thing. 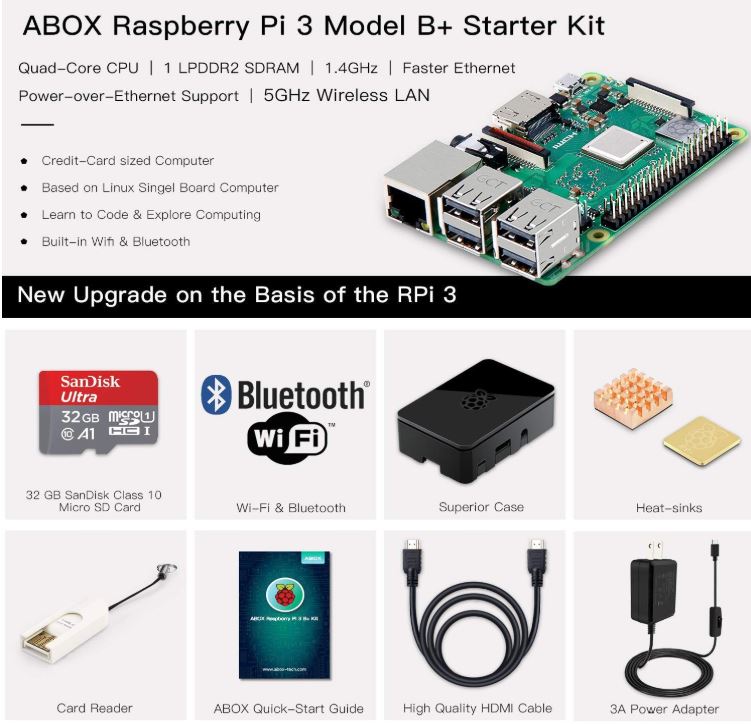 The ABOX kit includes a Raspberry Pi 3B+ along with all the essential trimmings. For instance, it comes with 32GB SanDisk Micro SD card that’s been preloaded with NOOBS. There’s also a microSD card reader that uses a USB-A and USB-C interface, allowing you to move data in and out of this system at 5Gbps.

You also get a case, a pair of heat sinks, an HDMI cable, and 3A power adapter that terminates in a USB connection. The ABOX 5V 3A USB power supply is complete with electrical noise filtering to ensure your components are running properly. And there’s an on/off switch on the 3A power supply, which is pretty convenient. 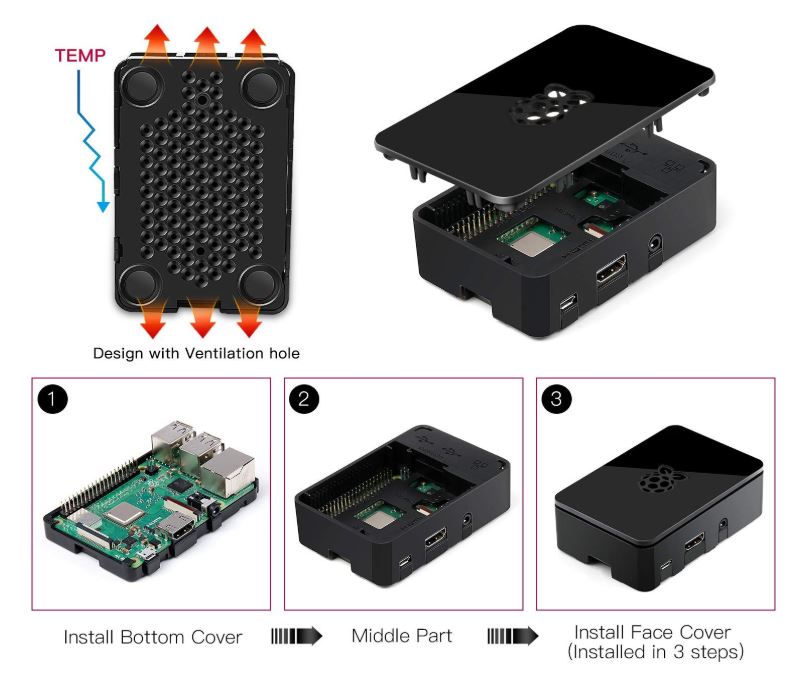 Using the official black case, you’ll find the chassis is pretty easy to work with. It’s a basic gray-black box with a glossy finish on the topside. ABS plastic was made to be impact resistant, which is why it’s so commonly used to protect electronics like the ABOX. One of the many improvements in the design of this kit has to do with its thermal management.

There are actually little feet along the bottom of the unit, which allows for better heat dissipation. The primarily aluminum build of the box, and some smartly positioned venting, also helps to keep things cool. Additionally, the included pair of heatsinks are made from copper. Another good choice.

You’ll be glad for the thermal management if you try and run a video. This kit supports MPEG decoding and OpenGL graphics, so all kinds of visual presentation options are on the table. In addition to having easy access to your AV needs, you can connect to LAN, USB, MicroSD, DSI display adapters, and of course cameras.

What about wireless? For 2.4GHz Wi-Fi, 5G, and Bluetooth, you’ll find simple connections across the board. You need a separate PoE HAT to access the PoE capability, however. 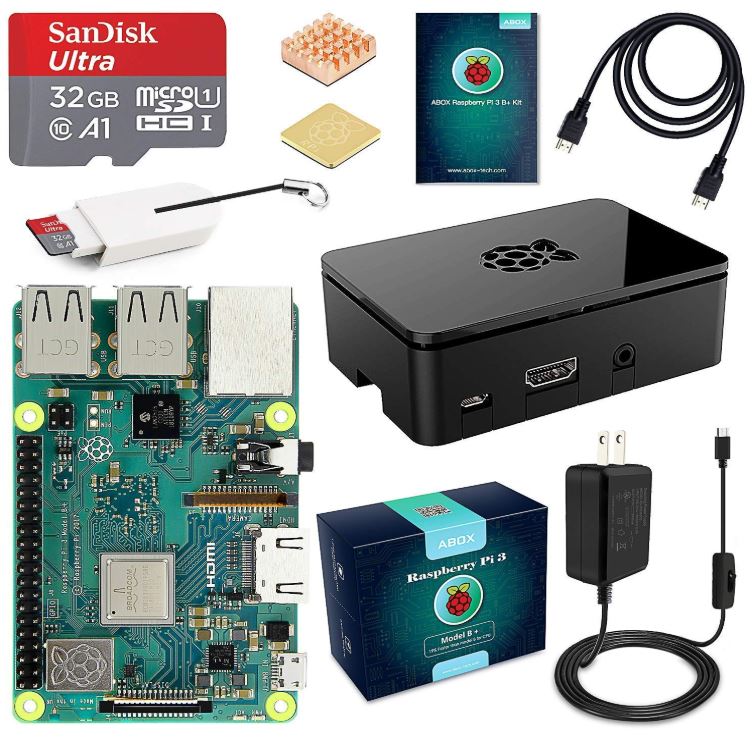 If you want an OS that loads quickly, and can handle simple tasks like data storage, NOOBS is fairly convenient. But it’s nice you’re able to change the OS without much trouble.

Because this kit uses the style of an official black case, it has wall-shaped mounted slots on the box. Thus the slight curvature to the box.

Best Raspberry Pi 3 Model B+ (B Plus) Starter Kit

The CanaKit Raspberry Pi 3 B+ Starter Kit and the ABOX Starter Kit share an enormous amount in common. In fact, these two kits are nearly identical in every way. Some people might argue that CanaKit has slightly better tech support. Others might point out that the ABOX Starter Kit includes a SanDisk SD card, while the CannaKit uses a Samsung SD card. But honestly, you could flip a coin. No matter what way it came up, you’d end up with enormous value.

What about the Vilros V-Kits Raspberry Pi 3 Model B+ Complete Starter Kit? Those kits are slightly different. The included case isn’t glossy. The topside has a pleasant curvature because it’s designed to be wall mounted. And this kit includes enough thermal paste for both of the included heatsinks. These kind of differences don’t sound like much, but they’re good tiebreakers when you’re struggling to pick between some of the best Model B+ starter kits.