If you’ve been considering building your own external SSD drive, you’ve got your choice of cases. Are you looking for something big and beefy? Probably not, or you wouldn’t be using an M.2 interface. But that can lead you into some trouble: specifically, a lot of M.2 cases aren’t very durable. They’re designed to slip into your pocket, not to take a serious beating.

To help you out of this bind, we’ve put together an overview of three of the best rugged M.2 NVMe enclosures available online. We’ll be looking first and foremost for durability, but we’ll also be looking for quality connections and fast transfer speeds. If rugged construction is less important to you than some of these other features, check out to the Guide to the Best USB Type-C Enclosure for M.2 NVMe SSD that we did last January. We had some great selections, and a lot of helpful info. For everyone else, let’s get started!

Before we begin, let’s start with your SSD enclosure’s most basic attribute: what type of interface it’s set up for. Now, you probably already know this if you were searching for M.2 NVMe enclosures, but if you stumbled across this while looking for general SSD enclosures, here’s a quick overview of what the different types of interfaces are:

SATA: Short for Serial AT Attachment, SATA is a mass storage drive connection that has been standard since the year 2000. It’s commonly used for internal drives like DVD and HDD drives, as well as internal SSDs. Most factory-built external hard drives use a SATA interface.

M.2 NVMe: Short for Mini2 Non Volatile Memory Express, M.2 NVMe is a smaller interface that’s identical to Mini PCI connecting pins. This allows M.2 NVMe hardware to be easily mounted on larger chipsets, making it a common interface for a variety of applications. However, it’s also well-suited to small peripherals, such as thumb drives and smaller SSD drives. 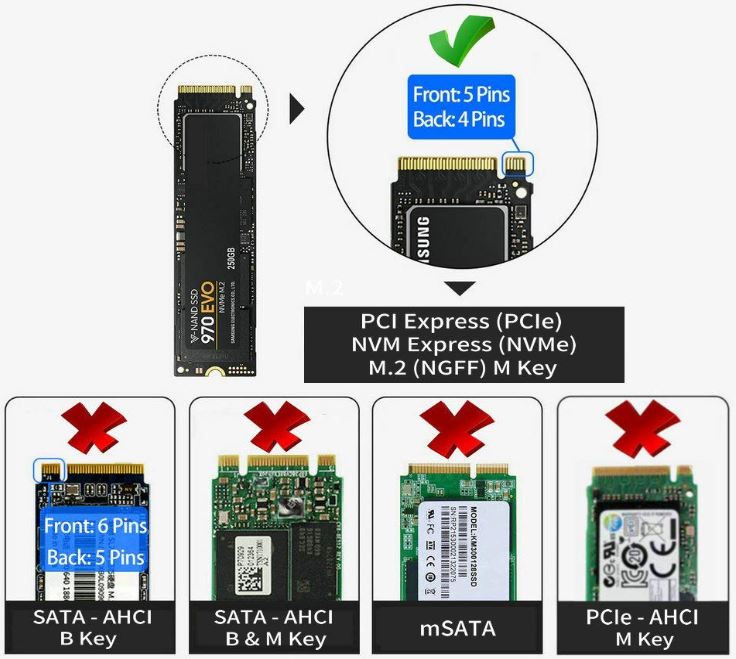 If you were considering building your own SATA drive, there are plenty of options. But why not just buy one? There’s really no point in building your own SATA external drive from scratch when there are so many well-designed, premade options. On the other hand, a homebrew M.2 NVMe drive can offer a lot of advantages, particularly since it can be significantly smaller than a SATA drive without sacrificing too much in the way of capacity.

One more thing. Don’t try to take a premade SATA external drive apart to use it as an internal drive, unless you’re 100 percent sure about the specifications. Most modern SATA external drives use a modified SATA SSD connection, which won’t be compatible with internal SATA ribbons.

Once you’ve chosen an interface (presumably M.2 NVMe) the next step is to choose what type of USB connection you’re going to use. If you’re confused, here’s a quick explanation: the interface is the type of pin connector on the drive itself. The enclosure’s interface will convert the data from the drive into useable data on the USB cable, and vice-versa. However, not all USB types are created equally.

Now, you’re probably familiar with the basic USB types: A, B, and C, and you’re probably aware that Type-C is the fastest. If you weren’t aware, then now you are. But even different USB Type-C variants offer significantly different speeds. Here are a few of the different current standards along with their maximum transfer speeds: 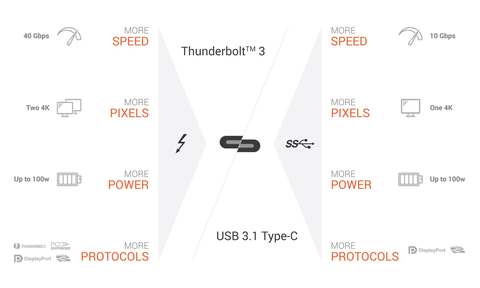 Now, PC and laptop ports are backwards compatible, which means that your Mac’s Thunderbolt 3 port will support any kind of device, a PC with USB 3.1 Gen 2 will support devices with the Gen 1 standard as well, and so on. However, older ports will not support a newer device. So if you haven’t added any USB controllers to your PC case since 2012, you might want to stick with an older protocol just to be safe.

Here’s the thing, though. All of these speeds are significantly faster than the maximum read/write speed of any hard drive on the market, even a blazing fast SSD drive. We’ll make note of USB connections as a matter of course, since we want you to be able to make an informed decision. Just keep in mind that a lot of manufacturers like to make advertising hay out of using the most advanced USB protocol. And while that can be helpful for powered devices, it doesn’t make much of a difference on a relatively small SSD.

Of course, your case material is also an important consideration. While cosmetics are often a concern for larger external drives that are designed to sit on your desk all the time, they’re a less important consideration for an M.2 NVMe drive, since this drive is more likely to be spending time in your pocket than it is to be anywhere people will see it.
That said, the material your case is manufactured from is important from a durability perspective, as well as for your drive’s longevity. There are three materials that are most commonly used for manufacturing external cases. Here’s a quick overview of each of them:

Plastic cases are generally constructed from ABS, although certain heavy-duty cases can be constructed from more durable nylon. Plastic is the most affordable choice, and can be tougher than you’d think, particularly if there’s a rubberized finish or if there’s an internal frame of some sort. That said, plastic doesn’t offer much heat transfer, so it can be a poor choice for cooling.

Metal cases are typically made of anodized or aircraft grade aluminum. They’re exceptionally sturdy, and can sport either a polished or a brushed finish. They also offer some amount of heat transfer, although this also means they can become warm to the touch with extended use.

Finally, some SSD cases are constructed from polycarbonate, sometimes called PC. These cases are easy to manufacture in a variety of colors, including most varieties of transparent SSD cases. Because polycarbonate tends to be more brittle than aluminum, we haven’t included any PC cases on our list. 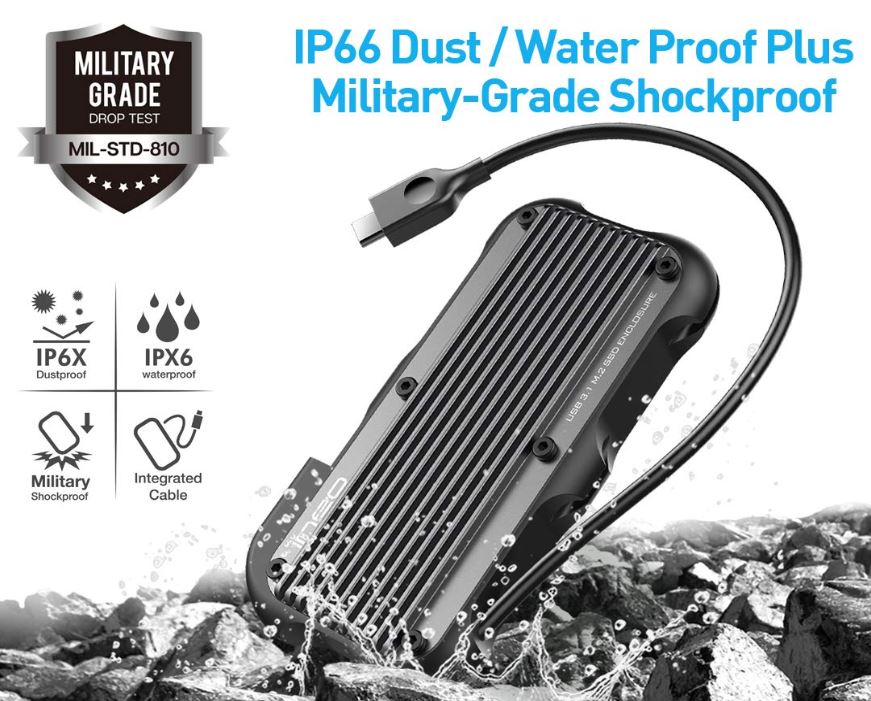 The ineo is a mid-sized SSD enclosure that measure’s 6.6 inches long, 3.9 inches wide, and 1.4 inches in thickness. Its outer aluminum case has a brushed black finish, with a sturdy, ribbed panel on the front and back to take the damage from any drops. The ribbing on the panel also increases the surface area of the case, which allows for more efficient heat dissipation even during periods of heavy reading and writing. A set of six hex screws hold the case together. 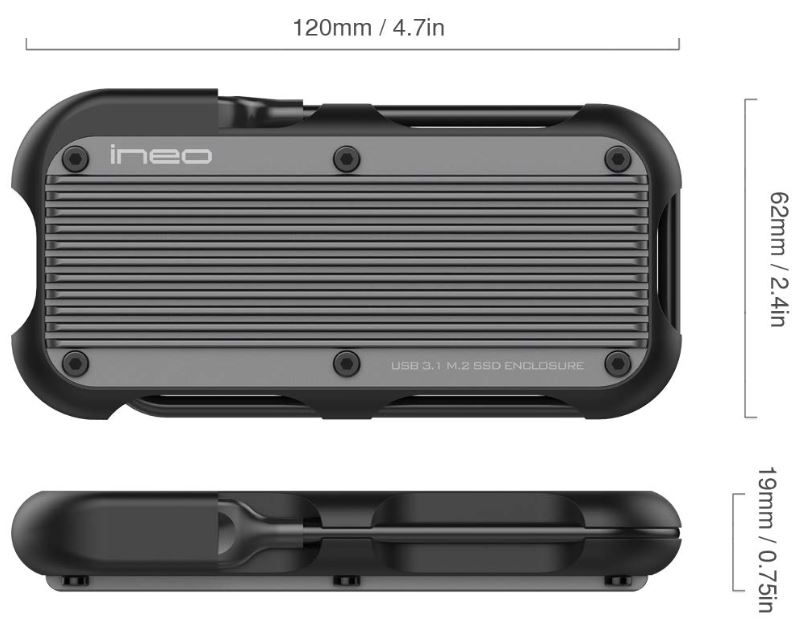 An internal silicone frame provides some protection from shock. Your SSD chip will fit securely into the channel in the middle of the frame, and won’t scratch your chip like a solid frame might do during installation. The silicone will also act as a thermal transfer, helping dissipate heat away from the inner SSD and into the outer case. In addition, there’s a dedicated silicone heat sink, to further reduce the thermal load on your SSD. 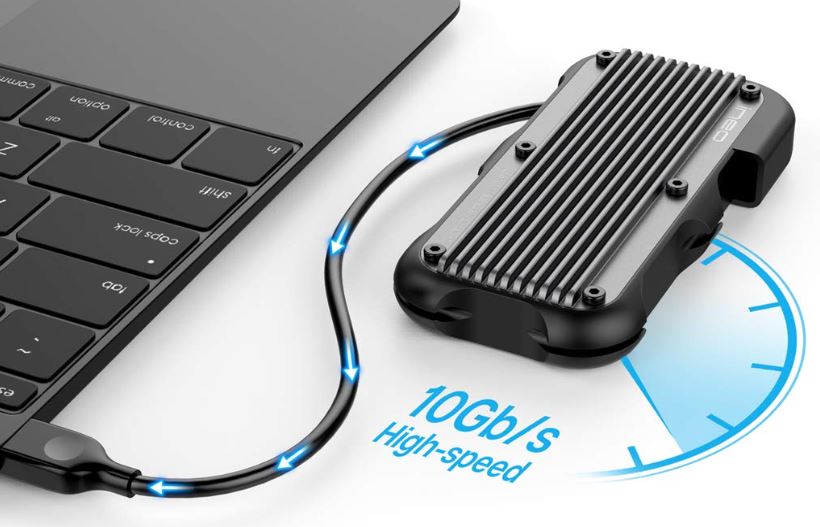 The USB C pigtail is integrated into the ineo’s case, and stores conveniently in a clip on one side of the drive. It supports USB 3.1 Gen 2, with a maximum transfer speed of 10Gbps. Like most USB drives, it can also be hot-swapped on any system, provided your SSD card supports this feature. Without the card, it weighs 5.6 ounces, so it’s light enough to carry easily but still beefy enough to let you know you’re carrying it. 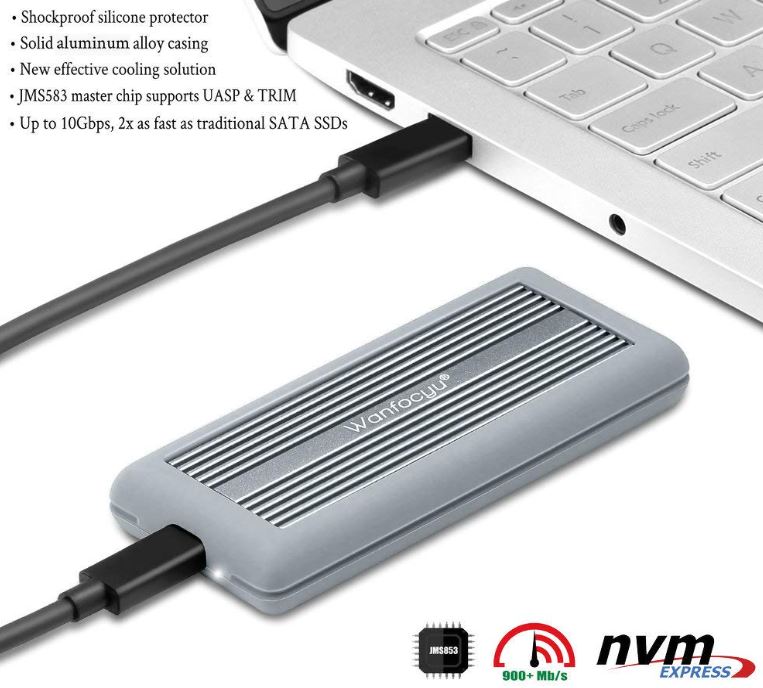 Wanfocyu’s enclosure could be easily explained as an inside-out version of the ineo. Rather than an aluminum outer case and a silicone inner case, Wanfocyu designed theirs with the aluminum frame on the inside and an outer shell constructed from silicone. It measures 4.7 inches in length, 2.0 inches in width, and is less than an inch thick (only 0.8 inches). The design also cuts down on the weight, with this little puppy tipping the scales at only 4.1 ounces. As a result, the Wanfocyu is easy to carry in your pocket, or in the tiny extra compartment at the end of your backpack. 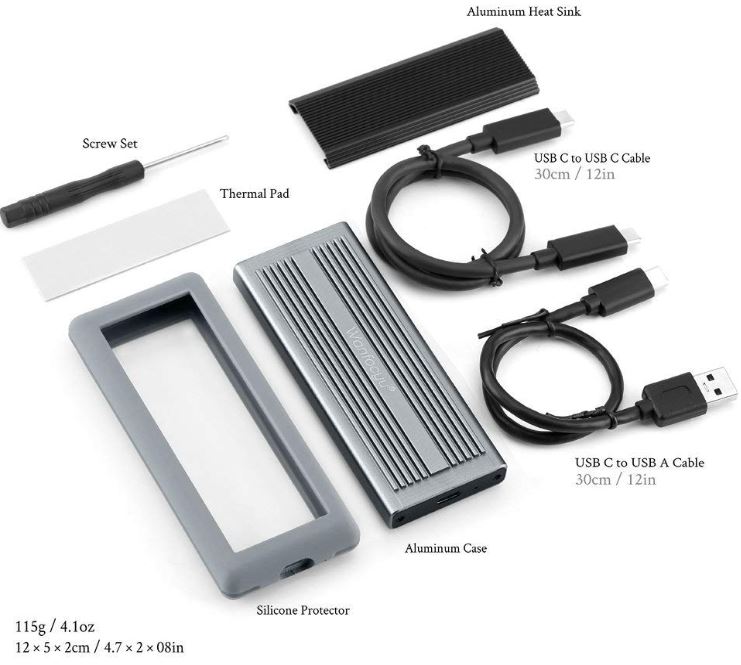 The purpose of the Wanfocyu’s inside-out design is to provide as much shock-resistance as possible. Drop this drive on the ground, and the SSD card inside won’t even recognize that anything has happened to it. It also provides a modicum of cooling. While it doesn’t cool as quickly as the ineo, the metal inner frame is efficient at dissipating heat to the outer shell, although the shell is not as efficient as aluminum at transferring heat to the air. 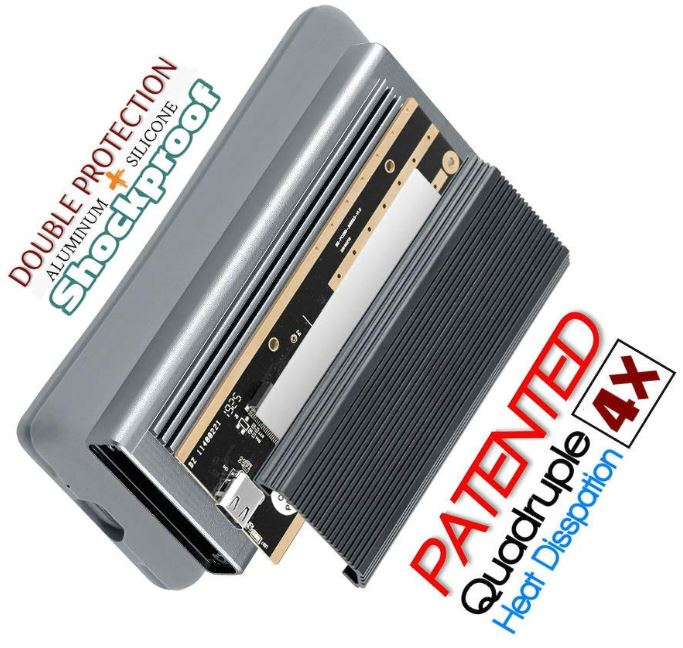 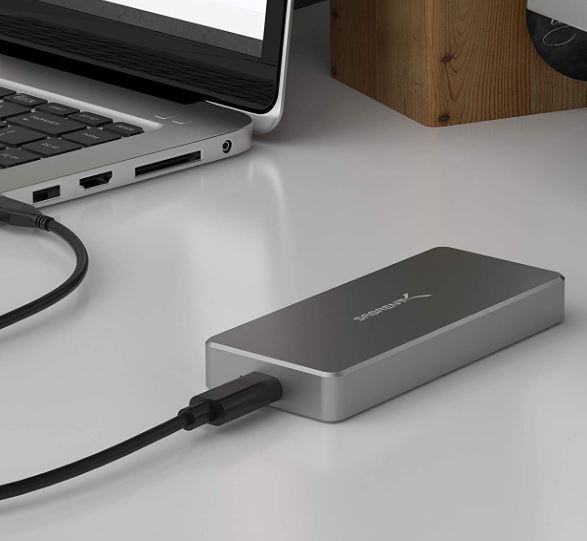 The Sabrent Enclosure is a rectangular SSD case that measures 7.5 inches in length and 2.5 inches in width. While it’s relatively flat, at only 0.7 inches thick, it’s also fairly long, which may make it awkward to carry in your pocket. At 7.8 ounces, it’s also on the heavy size, but it’s built like a brick and it’s capable of handling a lot of abuse. The aluminum outer shell is quite sturdy, and has a powder-coated finish with a beveled edge that won’t create a pressure point in your luggage or backpack pocket. We should point out that the Sabrent is also available in 7 colors, so you can get one to match any fashion taste. 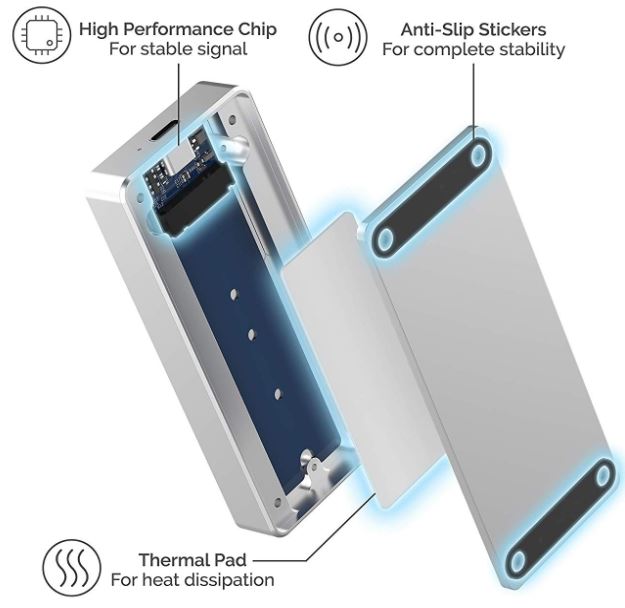 This case has an inner silicone heat transfer pad, that’s engineered to provide plenty of heat transfer to the outer case. While this is more than effective enough for everyday use, it may not be enough for heat buildup from continuous use – for example, if you’re streaming an entire marathon session of Game of Thrones. It’s also not as shock absorbent as the case on the Wanfocyu, although it does provide some protection. 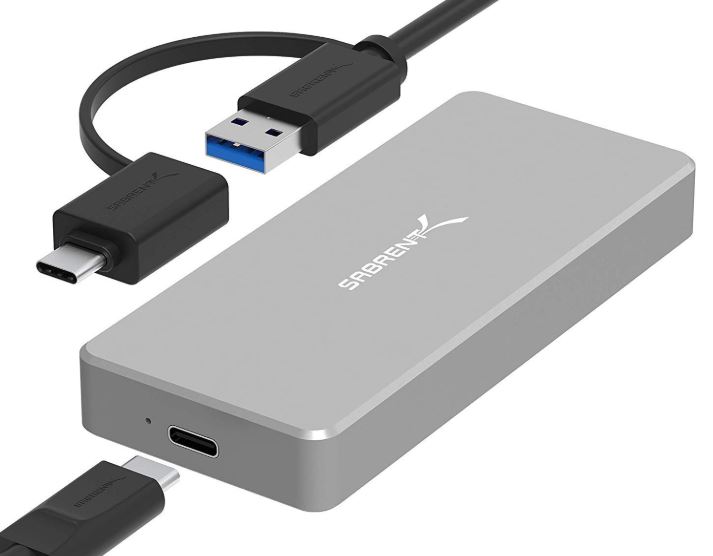 As with every case on our list, the Sabrent supports a USB 3.1 Gen 2 connection, with speeds up to 10Gbps. The cable has a built-in USB Type-A adapter, so you won’t need to carry a second cable if you want to connect different types of devices.

As you can see, each of these rugged USB Type-C M.2 NVMe enclosures has a lot to offer. They’re all well engineered, and each of them supports the latest USB protocols, although as we mentioned that’s not a major concern for data transfer.

However, the ineo stood out to us for a couple of reasons. To begin with, the aluminum case was on the outside. This puts it a cut above the Wanfocyu, which, while well-made, has an outer silicone shell that’s vulnerable to more wear and tear than the ineo or the Sabrent.

But why did we choose the ineo Enclosure over the Sabrent Enclosure, which also has an aluminum outer case? It was a tough choice, but the ribbing on the ineo’s case was a significant improvement over the Sabrent in terms of heat transfer. Now, the Sabrent should be fine, but there’s no such thing as having too much heat transfer on a hard drive. To us, that’s more important than the Sabrent’s large color selection.

That said, the Wanfocyu Enclosure has a major edge in one department: shock resistance. While the silicone shell is a concern from a wear-and-tear perspective, it’s exceptionally well-suited to absorbing the damage from any drops. If you’ve got butter fingers, it may be the better choice.