When you think about cutting edge technology, you probably don’t think about robot vacuums. After all, they’ve been on the market for something like 20 years. How much more can they really do? As it turns out, quite a lot. Modern robot vacuums don’t just randomly roll around your floor like an old-school Roomba. They map your home, and vacuum in a logical pattern. With app controls, you can even create artificial boundaries, and other advanced functions. So if you haven’t shopped for a robot vacuum in the last decade, now might be a good time to do so.

So, how do you find a worthwhile robot vacuum? There are a number of ways to go about it, but one way is to go with a brand you already trust. In that case, it’s tough to go wrong with Yeedi. They’ve manufactured a number of popular robot vacuums, and we’ve liked most of them. As a result, when we see that they’ve brought out a new vacuum, we’re excited to get a look.

Today, we’re going to review three different Yeedi vacuum options. These represent a new flagship series for the brand, but each has its own strengths and weaknesses. We’ll begin by reviewing the base model Yeedi Vac. This is a lightweight vacuum that’s reasonably powerful, and which comes with all of Yeedi’s app features. Next, we’ll look at the Yeedi Vac Max. This is an enhanced version, with a more powerful motor, longer-lasting battery, and mop function. Finally, we’ll check out the Yeedi Vac Station. This is similar to the Vac Max in most respects, but it includes a large base for its self-emptying hopper.

Which one of these vacuums is right for you? To find out, we’ll have to look a little deeper at each of their features. We’ll need to talk about their suction power, mapping features, and battery life. We’ll also need to look at the overall ease of use, as well as any extra features. Let’s get started! 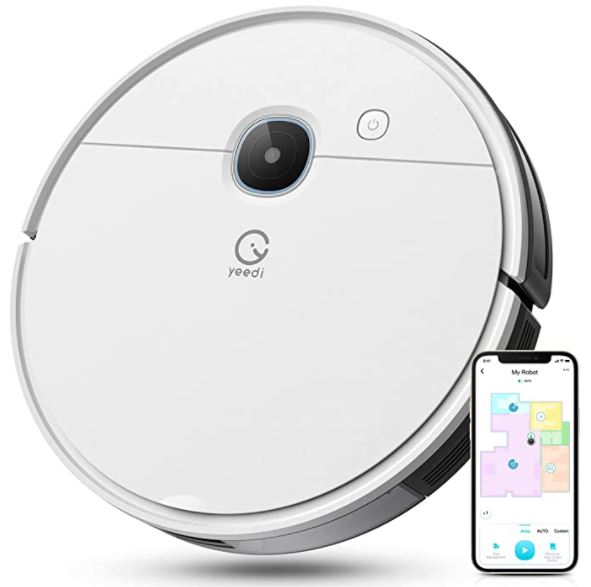 Before we talk about the larger models in Yeedi’s new flagship series, let’s talk about the base model. The Yeedi Vac is a dinner plate-sized robot vacuum with a white ABS housing. This material is reasonably durable, and there are bumpers on the sides to protect against kicking. There’s also a tempered glass panel on the top, which provides additional protection. In the top of the housing, there’s a small black panel, which houses the remote’s IR sensor. It also houses sensors for mapping your home. Near that sensor, there’s a white power button. This is used to send the vacuum on a cleaning cycle without using the app. 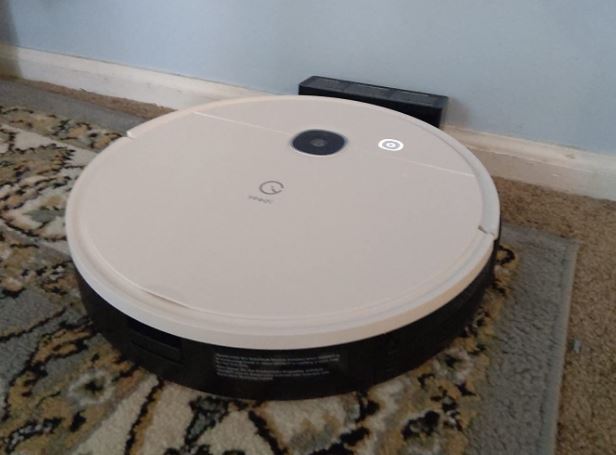 On the underside of the vacuum, the most visible feature is the main roller brush. This is a composite-style brush, with both nylon bristles and rubber flaps. The combination makes it serviceable for larger and smaller debris, and for floors as well as carpets. To the front right, there’s a horizontal brush, which spins horizontally like an upside-down helicopter. This is designed to sweep debris in from the side, and draw it towards the center of the vacuum. As you might imagine, it doesn’t do much on carpets, and it can even be removed if you want. On the other hand, it’s great on solid floors, and makes a noticeable difference in the vacuum’s efficiency.

To the sides of the large roller brush, you’ll find a pair of beefy rubber wheels. These wheels are designed to traverse most floor transitions. As a result, you won’t have issues with going from one surface to another, even with a small bump. Towards the front of the bottom, there’s an additional wheel, which pivots to provide steering. This wheel is smaller than the others, but that’s not a big deal. It’s not the drive wheel, so it will simply ride over a transition.

The dust bin is located in the front portion of the housing. It has a capacity of 450ml, which is a bit disappointing. Most robot vacuums have a half-liter dust bin, with many that are even larger. The result is that you have to empty the bin more often than you would with some other vacuums. That said, it’s relatively easy to access. 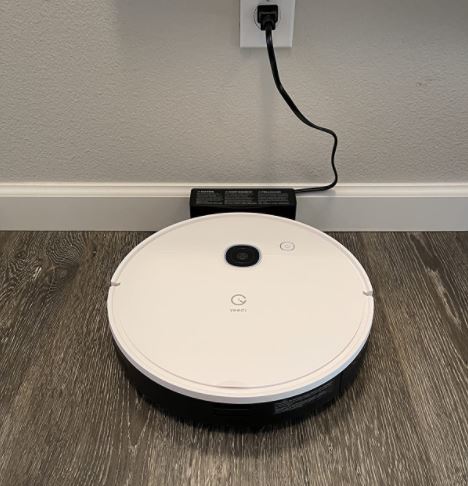 Two things you won’t have are a mopping function and a self-emptying function. You can purchase these as add-ons later on, but it’s cheaper to buy the Yeedi Vac Station to begin with.

The Yeedi Vac has a suction power of 2,500 Pascals (Pa). This is a bit more powerful than the average robot vac, which offers an even 2,000Pa. That said, keep in mind that robot vacuums in general are much weaker than full-sized vacuums. The typical upright vac, for example, provides 14,000Pa of suction.

So, what is 2,500Pa good for? Put simply, it’s perfect for everyday cleaning. Ordinary dirt and dust that gets tracked in from outside are not an issue. If you’ve spilled a little salt or even some cat food, the Yeedi Vac will pick it up. Just keep in mind that it’s not a shop vac, nor is it designed for cleaning deep pile carpets. 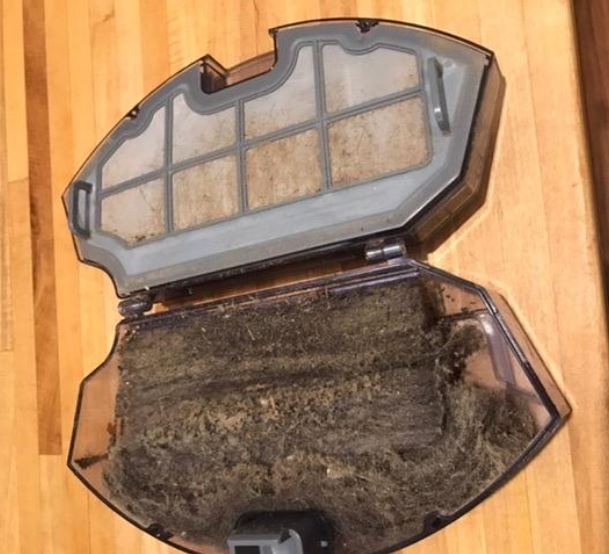 The internal battery will run for 110 hours when fully charged. This is enough for 1,100 square feet, so it can clean any apartment without the need to recharge. For houses, you may have to run it more than once. But that’s not a big deal, since the vacuum monitors itself and goes back to the charging base on its own. Once it’s recharged, it will resume the cleaning cycle right where it left off. The only time you’ll have to get involved is when the dust bin is full. When that happens, you need to dump the bin out before you can resume cleaning.

The built-in sensors will map your house as the vacuum runs. The first time it operates, it might seem to be moving oddly, but that’s no big deal. It’s just creating an accurate map. After it’s mapped your home for the first time, it will know where it’s going. When that happens, the Yeedi Vac will move back and forth in a standard “lawnmower” pattern. 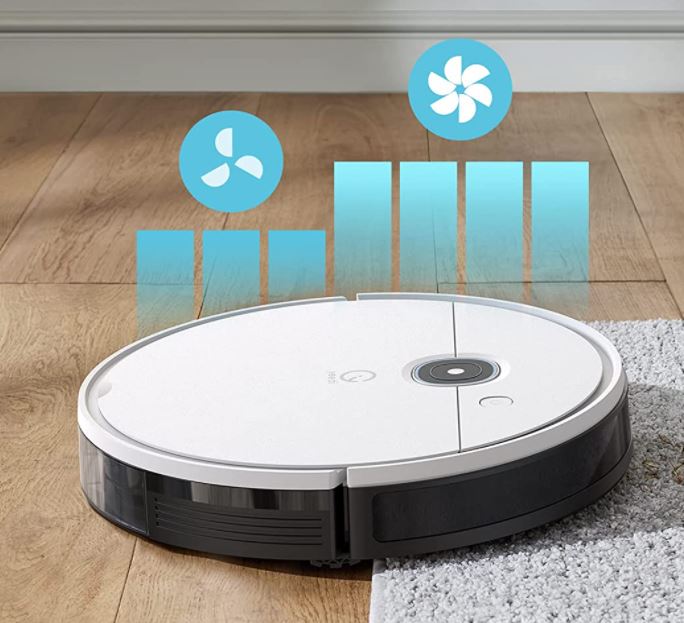 The primary method of control is through the Yeedi app. Within the app, you can view the map of your home that the vacuum has created. You can then select specific rooms for spot cleaning, or designate areas as “no go” zones your vacuum will avoid. You can also schedule regular cleanings, on a weekly or even daily basis. Finally, you can pair your vacuum with Amazon Alexa and Google Assistant. Both of these platforms can be used to adjust your schedule or perform an impromptu cleaning.

If you want a different Yeedi vacuum, take a look at the Yeedi K650. It’s almost as powerful as the Yeedi Vac, but it’s more affordable. On the downside, there’s no smart mapping feature. All it does is vacuum your home while avoiding obstacles. 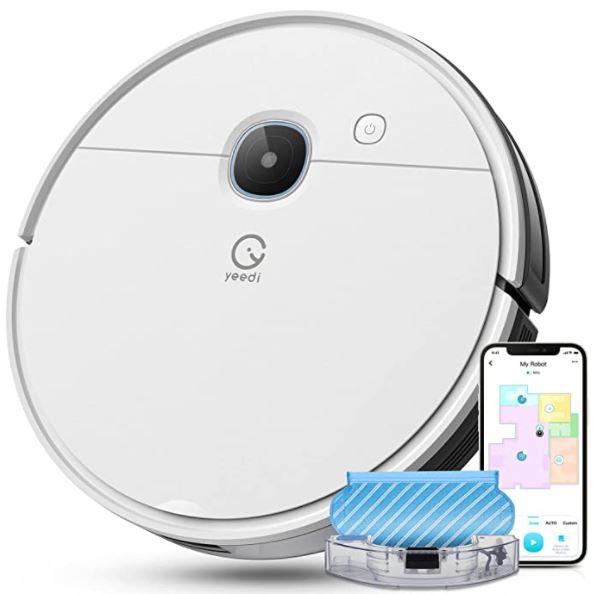 The Yeedi Vac Max, as its name implies, is designed as a premium version of the standard vac. In terms of overall design and appearance, it’s more or less the same. It’s the same size, with the same wheels, roller, and brush. That said, there’s a mopping pad located directly behind the main roller. There’s also a 240ml water tank. This can be used to clean about 600 square feet of hardwood or tile. On the downside, it also has the same small, 450mL dust bin. If you want a larger one, the Yeedi K700 is a better choice. It has a 600mL dust bin, 33% larger, but there are no app controls. 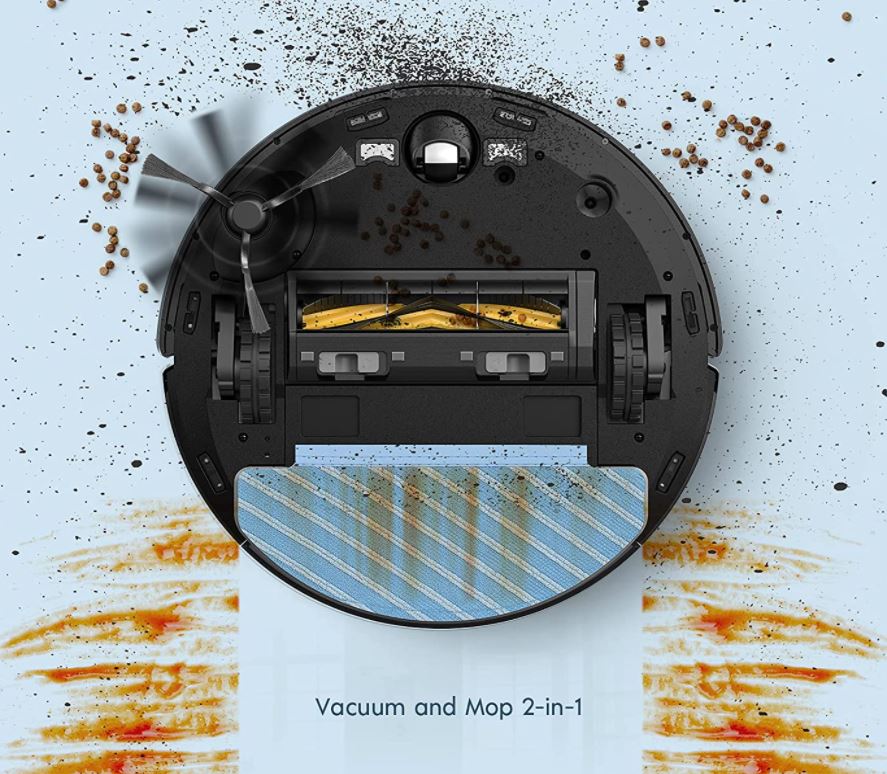 One major area of improvement in the Vac Max is a beefed-up motor. This motor provides 3,000Pa of suction, 20% more than the basic Yeedi Vac. You won’t notice much of a difference on hardwoods or tile. But on medium pile carpets in particular, you’ll notice a significant boost in power. Along the same lines, the Vac Max has a more powerful battery. Even with the bigger motor, it lasts almost twice as long, with a full 200 minutes of runtime. This is enough to vacuum a 2,000 square foot area, enough for most residential homes.

All of this comes with the same smart features as the base model Yeedi Vac. You have the same easy-to-use app, with the same features, including Alexa and Google compatibility. 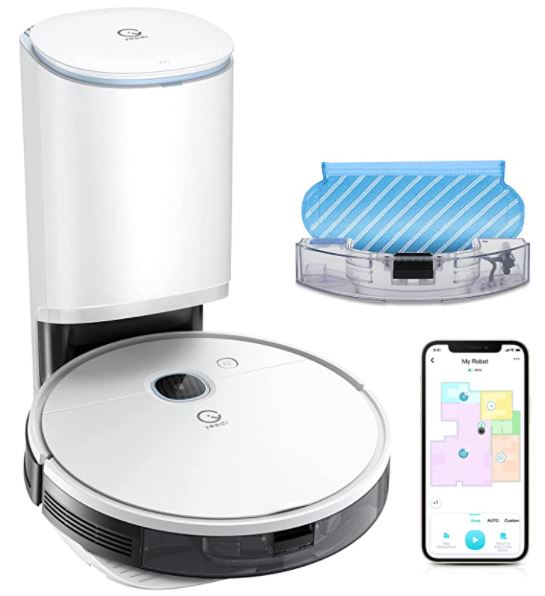 The Yeedi Vac Station is the same as the Vac Max in most respects. In fact, the vacuum itself is literally a Vac Max vacuum. However, it includes a much larger base station that contains a standard vacuum bag. When the vacuum’s built-in hopper gets full, it will return to station just as if the battery is dead. Then, the station’s own built-in motor will suck the debris out of the dust bin and into the bag. After that, the vacuum itself will return to cleaning your floor. So instead of changing a dust bin every few days, you’re emptying a dirt bag once a month or less. 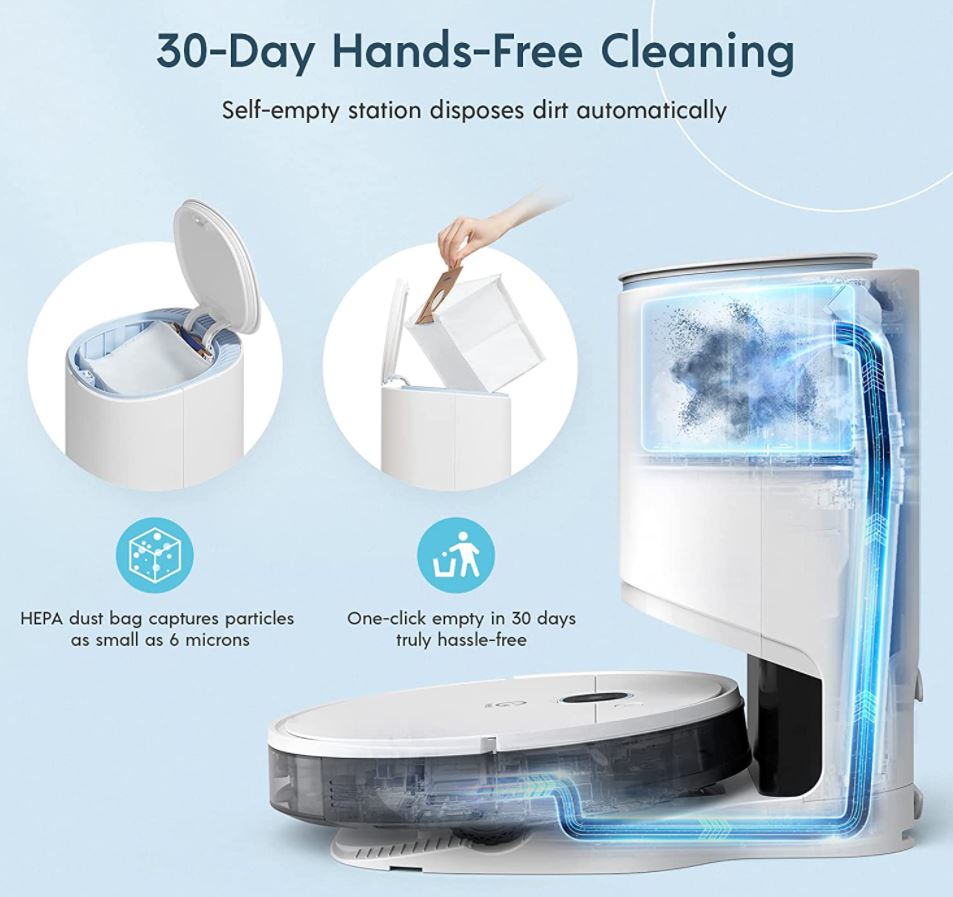 Moreover, the base station has a built-in HEPA filter. When it’s sucking out your vacuum, almost all the allergens are getting trapped in the filter. Another Yeedi option with a HEPA filter is the Yeedi K600. It’s a standalone vacuum with the HEPA filter inside the housing, instead of in a base station.

So, which Yeedi vacuum should you get? Between the three options, the Yeedi Vac is the most affordable. That said, it’s also the most limited. It only has 2,500Pa of suction, and about 1,100 square feet of coverage. But it also supports all of Yeedi’s app features, which is a huge benefit. If you want those features with more powerful suction, the Yeedi Vac Max is a better choice. It also comes with a mopping function for solid surfaces, as well as a stronger battery. The Yeedi Vac Station comes with all of those benefits, plus a self-emptying dust hopper. If you’re willing to spend more to automate your vacuuming as much as possible, it’s a great choice.