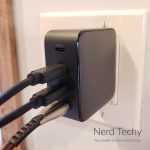 These days, it’s important to keep your electronics charged. The fact is, we rely on our devices for a lot of tasks, many of which are essential. Let’s say you work outside the home; if your phone doesn’t work, you’re out of the loop with your job. But there are other reasons you need to stay charged up, too. What if you want to order dinner, or check your bank account balance? What if you need to hail a rideshare, or keep tabs on your kids? And those are just things you do with your smartphone. Extend the same logic to your tablet and laptop, and it’s easy to understand why you need a good charger.

But how do you find a reliable USB charger? There are a ton of features you should look for, but the most important is compatibility. Look at the devices you need to plug in, and think about the kinds of plugs you need. Then, choose a charger with the appropriate types of connection. Another consideration is the total amount of wattage. It makes a big difference whether you’re trying to charge a smartphone or a full-sized laptop.

Beyond that, it helps to look at a brand you’re already familiar with. For example, you could consider a charger from UGREEN. UGREEN is a popular electronics brand that makes a variety of products. They’re probably best known for their wireless earbuds, but that’s far from the limit of their expertise. They also make some well-engineered chargers.

Today, we’ll be reviewing the UGREEN 100W 3C1A GaN Fast Charger. This charger is designed to deliver up to 100 watts of power continuously. It can supply up to four devices simultaneously, so it’s good for the whole family. And with its collapsible prongs, it’s a solid choice for travelers. But what else does it have to offer? And is it going to be the optimum choice for your needs? To answer those questions, we’ll need to take a closer look at its various functions. Once we’ve given it a thorough evaluation, we’ll be able to wrap up with a fair verdict. Let’s begin! 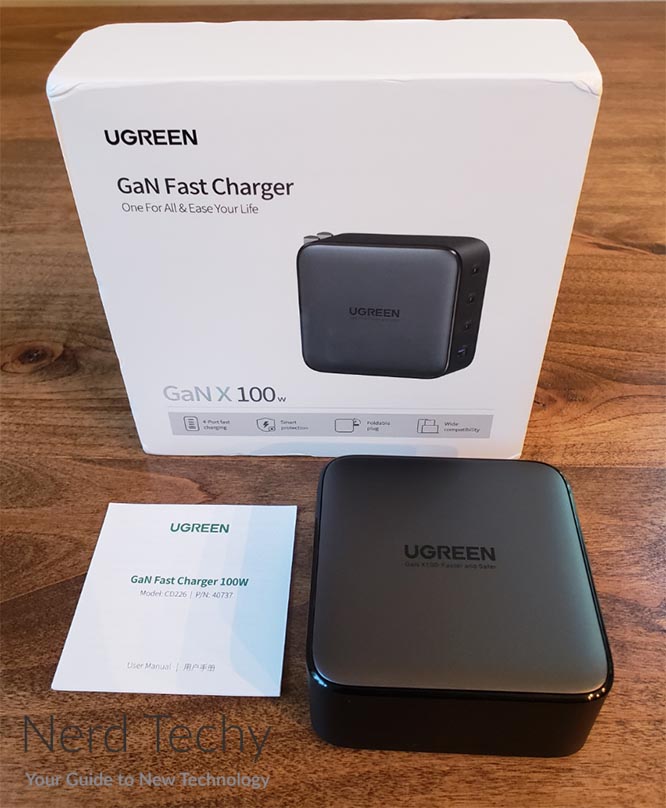 What is PD Power?

So, what does it mean when we talk about a fast charger? Exactly how fast is “fast”? To understand that, we’ll need to talk a little bit about Power Delivery (PD) technology. This is a faster, higher-wattage version of USB charging that’s designed for today’s high-powered devices. However, PD actually encompasses a range of different products, not all of which are equally capable. Here’s a quick overview.

When USB was first designed, nobody was even thinking about power transfer. The USB Promoters Group, the creators of USB, are a group of hardware manufacturers. Their goal was to replace a bunch of wildly-different data transfer cables with a single standard. That’s how USB gets its name; it stands for “universal serial bus.” That said, any set of copper wires is technically capable of carrying a current. A handful of manufacturers jumped at the opportunity, and started making USB-powered devices. These were simple, low-voltage items like USB thumb drives with LED lights. But the USB Promoters Group saw the opportunity, and added more capacity to the USB standard. 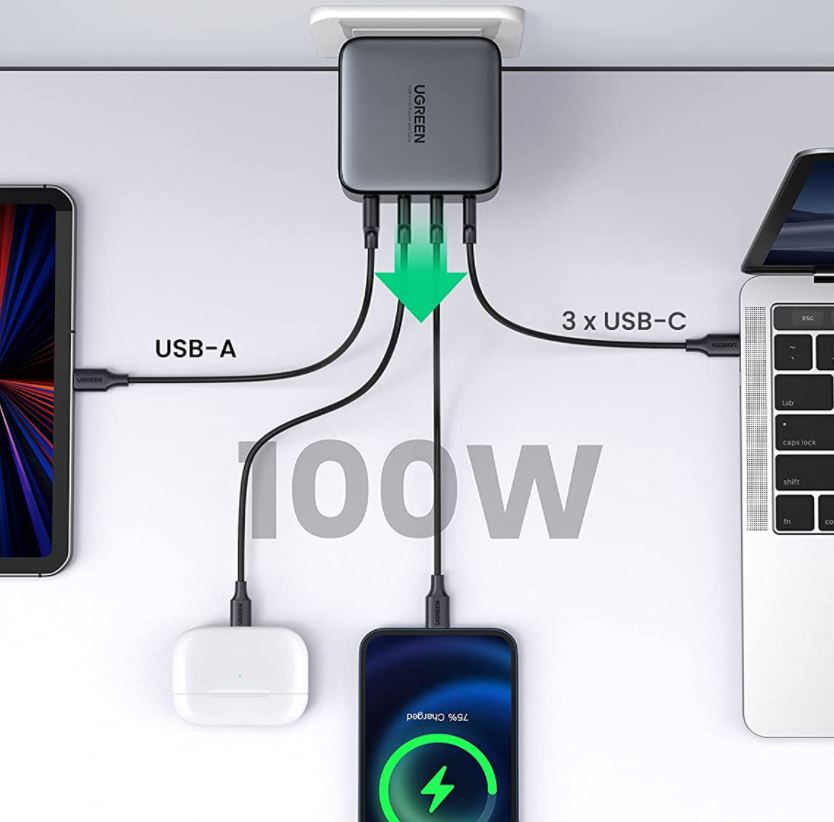 Nowadays, most devices utilize the USB 3.0 standard. This standard calls for a current of 5 volts at 2.4 amps, which works out to 12 watts. The standard was set with smartphones in mind, and 12 watts is plenty of power for most phones. But there are some devices that won’t run on 12 watts. Take, for example, a large laptop. You can forget about running a MacBook Pro on any low wattage cable. And even if you’re just using the cable for charging, it takes a while to fill the large battery. In other words, you won’t be able to use the laptop during the charging process. Clearly, more power is required for running these larger devices.

The USB Promoters Group has known this for a while. In fact, USB Power Delivery has been around since 2012, as a higher-powered standard. But in practice, USB PD failed to deliver for a long time. Early “PD” standards only offered a few watts more than the USB 3.0 standard. But with the newer USB 3.1 standard, developers were able to push PD to its limit. Since 2018, PD power has technically supported up to 100 watts of power. This isn’t universal; different PD chargers provide different wattages. But 100 watts is the maximum over a single connection. That’s enough for large laptops, and even for the Nintendo Switch.

In order to achieve this, USB PD ports and cables need to be of the Type-C variety. The reasons are complicated, and outside the scope of this article. But the point is that USB Type-A and Micro USB devices won’t support PD power. They’re also not likely to in the future. The industry is slowly but inexorably moving towards Type-C as the new norm, and it makes sense. It’s faster, it’s more powerful, and the plugs are reversible.

That said, PD power ports are intelligent – they can be used with both PD and non-PD-compatible devices. When you plug something into them, they’ll detect how much wattage is required, and deliver the right amount. This means that a single charger can be used for multiple devices that require different amounts of power. In turn, you get a very safe system, where your devices aren’t going to get overcharged or leech unnecessary power.

Beyond that, PD power ports can also send and receive power through the same port. Now, we should put a giant asterisk here, because this capability is far from universal. For example, the ports on today’s fast charger are “exit only” and cannot receive power. But why would they ever need to? You’re using the charger to charge your devices, and not vice-versa. But there are applications for this. For example, many of the newer Android smartphones can double as power banks. This way, they can be used to charge your earbuds and other accessories. 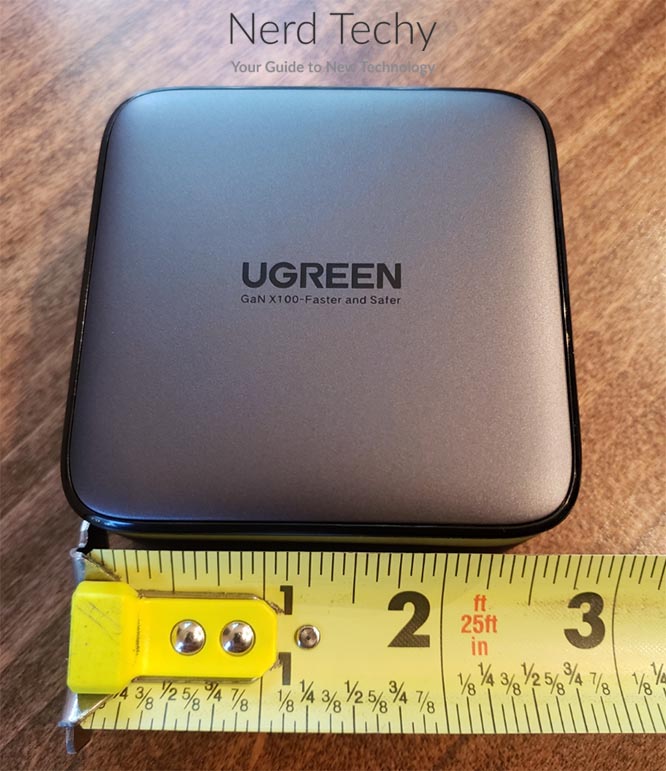 The UGREEN 100W 3C1A GaN Fast Charger is a simple, rectangular charger that plugs into your power outlet. The housing is constructed from black ABS plastic, which is reasonably sturdy and crack-resistant. It’s easy to keep clean, and doesn’t collect a lot of fingerprints from repeat handling. It measures 2.72 inches square, and 1.3 inches in thickness. This is small enough to fit in the palm of your hand, and it’s easy to transport. You can drop it in a bag or purse and carry it wherever you like. Moreover, the plug is collapsible. This means you can keep the prongs safe when you’re travelling. 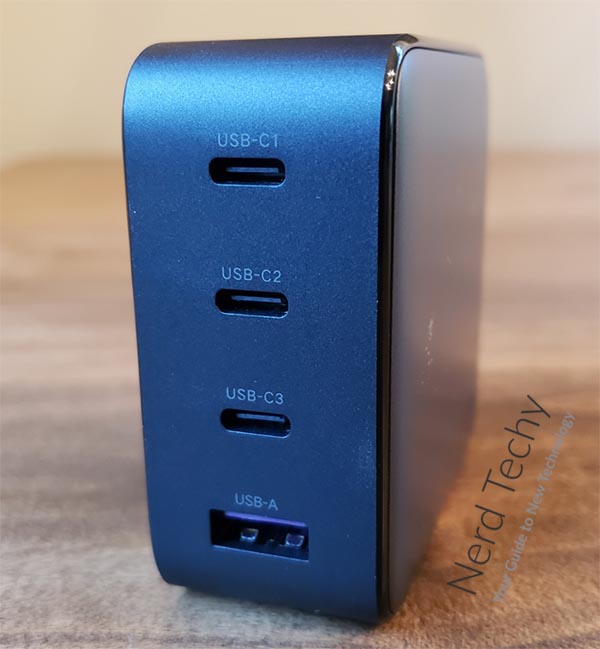 On the front face of the charger, you’ll find the four charging ports. The three USB ports are at the top, and are clearly labeled. Beneath these, there’s the single USB Type-A port. This port has a bright blue internal tab, which makes it easy to insert your plug. You won’t have a hard time figuring out which way it needs to go in. Other than that, there’s no decoration on the housing. There’s just an understated embossed UGREEN logo on each side.

If you want a USB charger with more panache, consider the VogDUO Charger. It’s tough and sturdy, with an orange leather sleeve that wraps around the sides. This doesn’t necessarily make it any tougher, but it’s a little easier on the eyes. 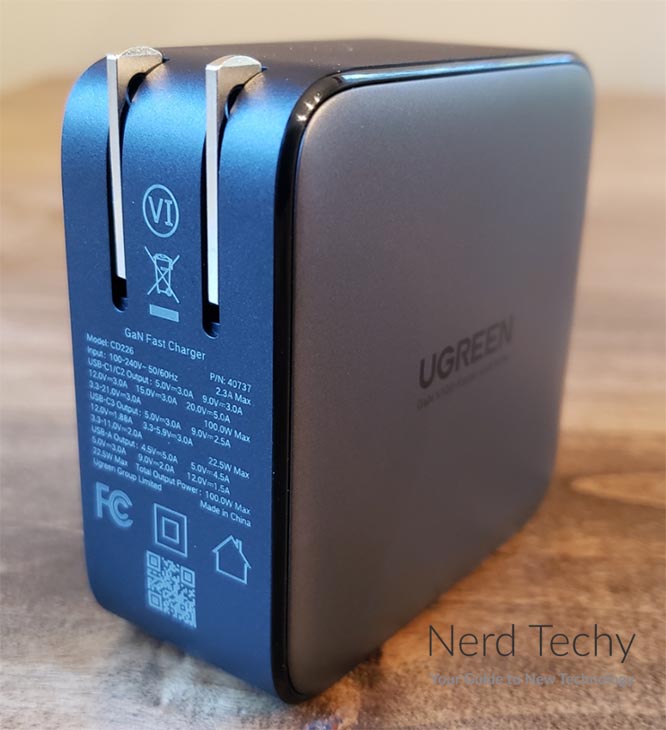 The UGREEN charger contains an ultra-modern Gallium-Nitride (GaN) circuit board. This is a significant improvement over traditional silicon circuitry for a couple of reasons. To begin with, it’s much more efficient. It keeps you from wasting energy during the charge cycle, and delivers the most possible power to your device. For another thing, GaN circuitry is safer than silicon. It’s less prone to overheating, which reduces the risk of fire or damage to the charger. 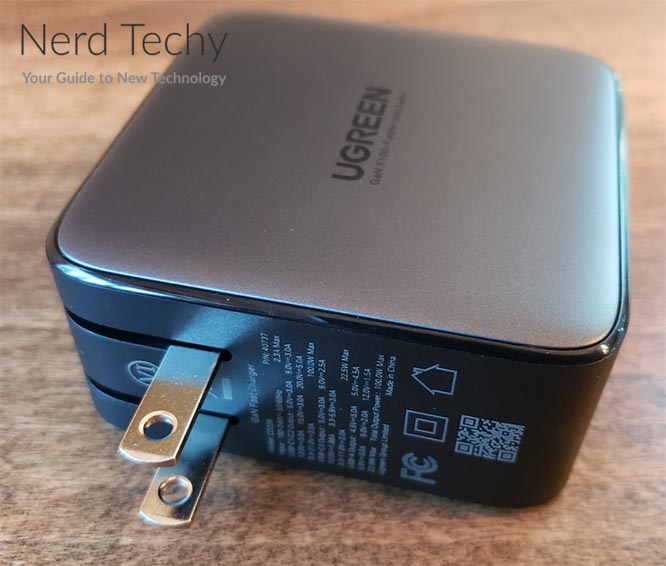 This charger is capable of 100 watts of total power output. That’s the maximum possible for PD power, and it’s fairly impressive. That said, you’ll have to keep in mind that 100 watts is the maximum total power. So if you’re using one PD device, it will get a full 100 watts. If you’re using a second device, they’ll have to share. The charger will intelligently distribute power as best as possible, but there are limits. For example, there’s no way you’ll run three MacBook Pro 16” laptops simultaneously. 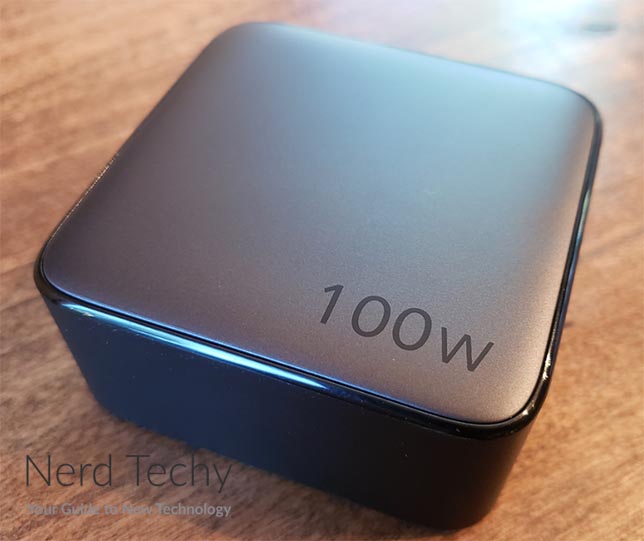 Another thing to be aware of is that not all cables are capable of delivering PD power. If you want to get the most out of this charger, you’ll need a quality USB Type-C charging cable. 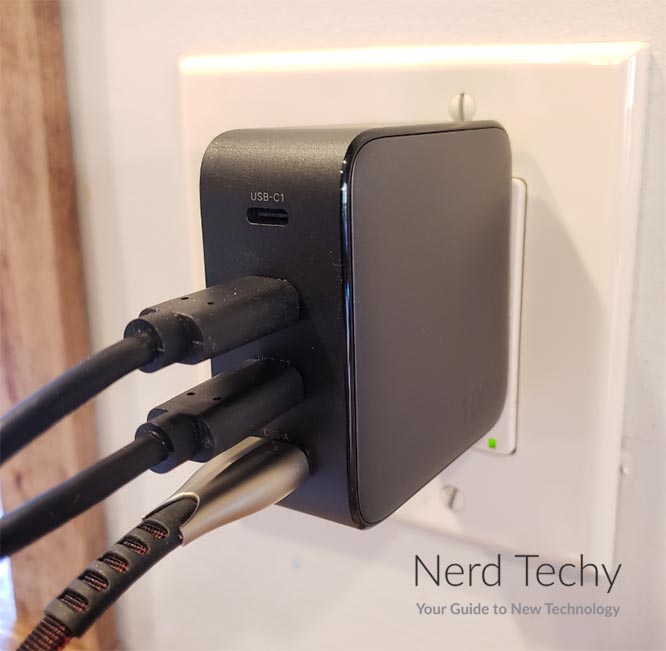 This UGREEN charger provides all the safety and security features you expect from a modern USB charger. To begin with, it protects you from overvoltage, so your device won’t get overloaded. Overcurrent and short-circuit protection both provide a similar benefit. Meanwhile, overheating protection further improves on the GaN circuitry’s safety. 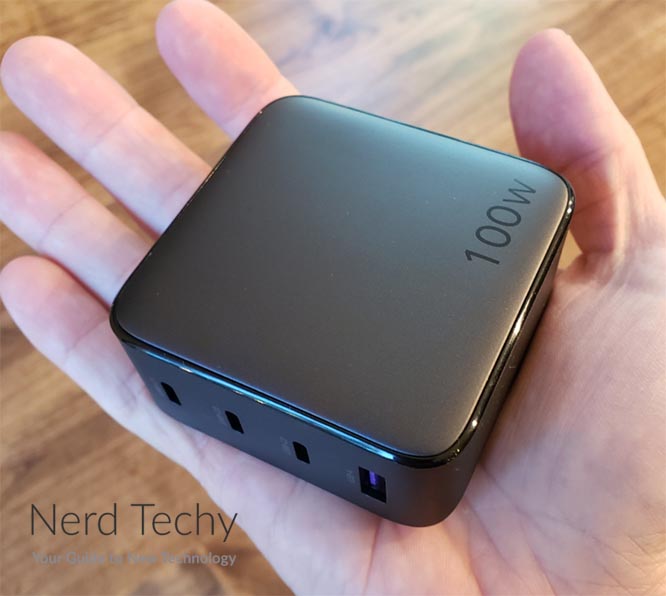 In addition, the UGREEN charger comes with both US and EU plugs. Make sure to select the right one when you place your order. That said, both versions are worldwide-compatible. All you need is an international adapter, and you can use the EU charger in the US, and vice-versa. 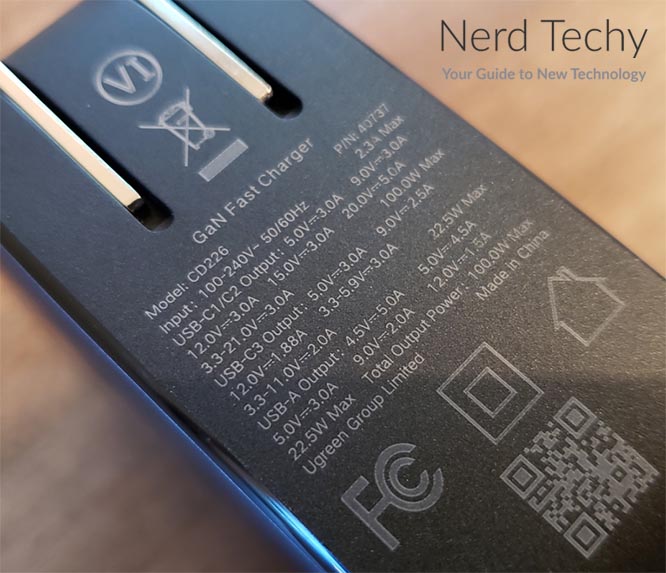 So, is the UGREEN 100W 3C1A GaN Fast Charger a good investment? For most people, it’s tough to see why you wouldn’t want it. To begin with, the maximum power of 100 watts is the highest possible for a PD charger. For another thing, you get four charging ports, so you can charge four devices. If that’s not enough, you get a full slew of safety features, and the most efficient GaN circuitry available. The only reason you might want to look elsewhere is if you need more than one USB Type-A port. Otherwise, it’s a top-tier PD charger.