Waking up to an alarm clock can be unpleasant. It’s one of the most common TV tropes, bad days always seem to start with the annoying sound of a blaring alarm clock. But over the past decade, a lot of alternative styles of alarm clock have been popping up. These new styles might use vibration, pulsating light, or some combination of similar effects.

If at all possible, it’s usually better to ease out of your sleep cycle, rather than be torn awake by a sudden noise. The shift from sleep to awareness is far more pleasant when taken over several seconds. And that becomes an understatement after you get to be a certain age. A loud alarm clock is the kind of thing that could bring on a cardiac event.

But no matter you age, getting stressed out by an alarm clock is a terrible way to start your day. It starts a physiological response in your brain that prepares you for conflict. Perhaps this is why some people don’t feel normal until they clear their heads with the help of a shower and some coffee.

Sunrise wake-up clocks have a unique advantage over other types of alarm clocks. The difference is right in their name – sunrise clocks are able to use light. And light has a special relationship with the human brain that noise does not. The color temperature of light helps feed your brain information about whether it should be waking up, or going to bed. 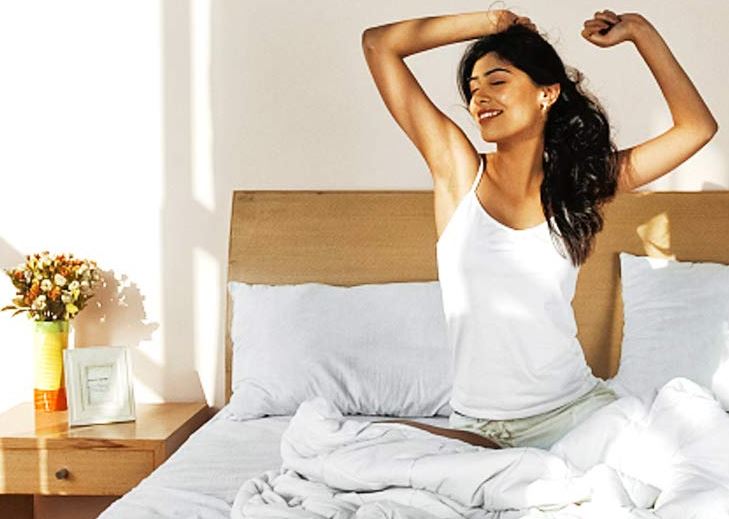 Cooler light temperatures, meaning bright white light, is great for helping wake a person up. However, it’s terrible to get exposed to this light before bed, and is known to cause sleeping problems. Warmer temperatures, meaning orange-white light, is great for the hours before you go to bed. It doesn’t have the blue light that’s found in the cooler whites, so it won’t keep you up before bed.

The best sunlight alarm clock will be capable of using cool white light in the morning, and warm white light in the evening. Lights that can only do one or the other aren’t necessarily a bad choice, but they’re possibly sub-optimal.

Most sunrise gentle wake-up alarm clocks don’t rely on light alone. Most will allow you to use a wake-up sound, similar to an ordinary alarm clock. If you plan on using sound, then you should look at all your options.

If the alarm clock is going to be part of the aesthetic of your bedroom, then most people will agree, it’s better if it doesn’t look like garbage. And if it’s going to make use of light to wake you up, then you’re going to want to think about how long those lights will last, and if it’s possible to replace them.

These considerations usually aren’t critically important because any decent sunrise wake-up alarm clock should be made with a light that will last half a decade with ease. But it’s something to keep in the back of your mind. 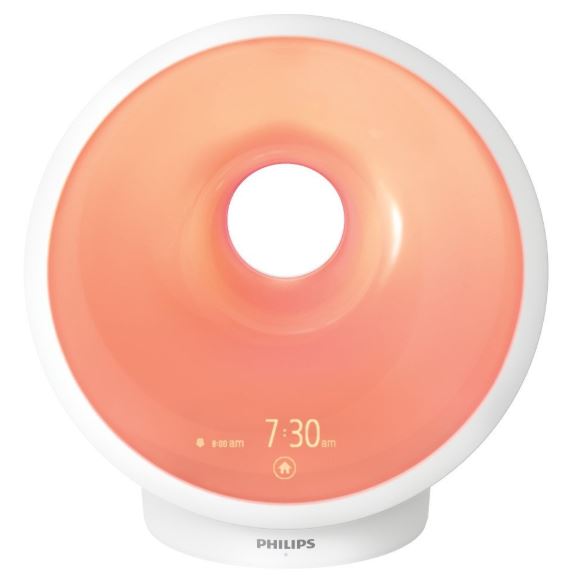 The Philips Somneo is among the best of the best. If you’re looking for an alarm clock that’s truly at the top of its game, it certainly has to be in the conversation. Like you may expect, Somneo’s light gradually brightens before you’re supposed to wake up.

By the time the alarm goes off, you’ll find your room has been filled with a bright white light. In addition to being an alarm clock, the Somneo is actually a therapy lamp. For going to bed, its sunset simulation will gradually decrease the light and sound output, helping ease you to sleep. 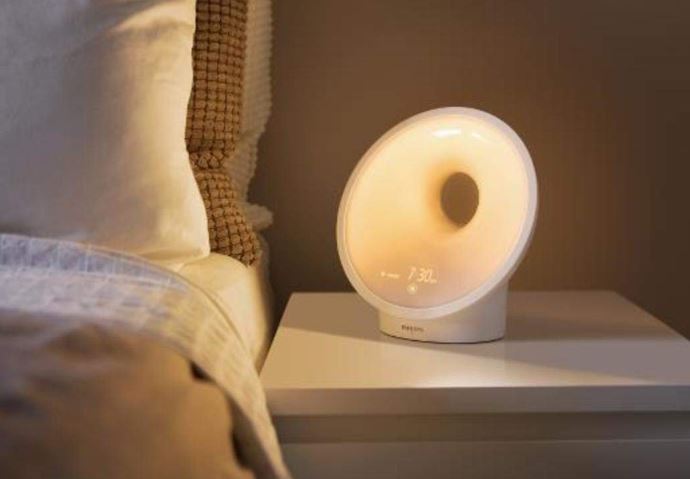 Somneo measures 12 x 8.8 x 4.7 inches, and weighs roughly three pounds. It has a bizarre construction that resembles either a donut, or some kind of new-age chair. You can really only tell it’s an alarm clock because the bottom side of the “chair” lets you know what time it is.

Though the materials which make the lamp aren’t terribly special, they are terribly beautiful when the Philips Somneo lights up. Its glossy finish gives the Somneo a pleasant aesthetic when struck by the sun, as well.

Throughout the course of a day, the entire front face of the Somneo is a color changing display, which gradually shifts from orange to yellow. Inside Somneo is a RelaxBreathe bulb, which works in conjunction with a wind-like noise. The output of the bulb peaks at 320-lux, which is actually quite bright.

According to one set of lab tests, roughly four out of five Somneo users reported falling asleep easier with the help of the RelaxBreathe noise. There’s reasons to doubt this test was vigorous, but the Somneo beats placebo, which means it’s certain to help some people fall asleep. 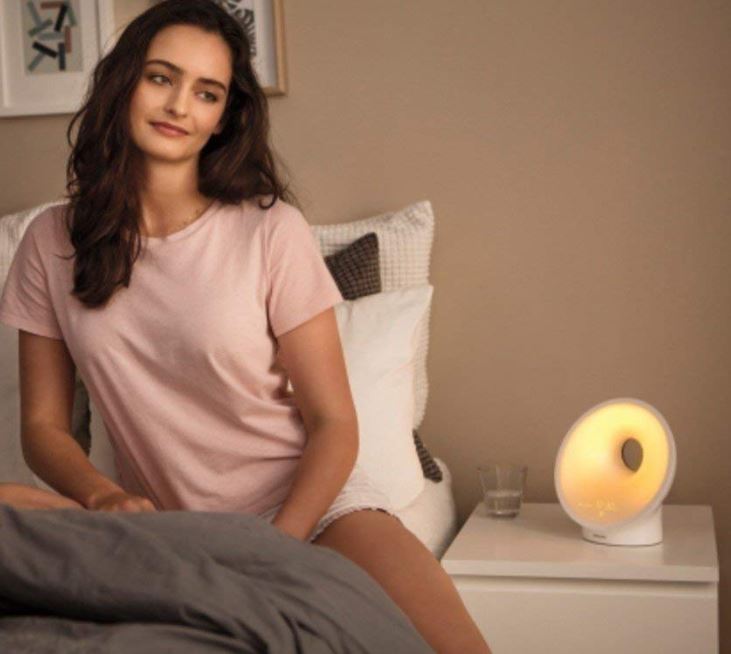 In addition to the basics, Somneo offers multiple brightness settings, and a power snooze feature that can help you avoid snooze cycles. It offers unlimited options for music and sounds to pick between, including radio stations and sound files from your phone.

Though powered by an outlet, Somneo contains a power backup feature, a small battery that keeps the unit alive for eight hours after a power failure. That ought to be helpful, unless the power goes out immediately after you fall asleep, and you sleep for nine hours. But outside of being extremely unlucky, the battery ought to be very useful. 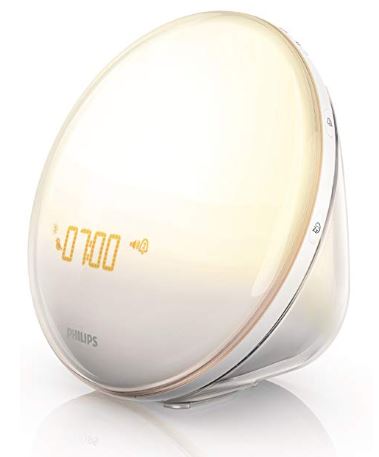 The Philips Wake-Up Light Alarm Clock is a more traditional looking alarm clock. At the center, you’ll find a number of buttons you can use to check the temperature, or configure the alarm with touch controls.

Around a central console, you’ll find a large disc-shaped lamp, which changes colors depending on the alarm. All in all, Wake-Up works like a fairly ordinary sunrise alarm clock. But being rooted in Philips technology, it does have quite a bit to offer. 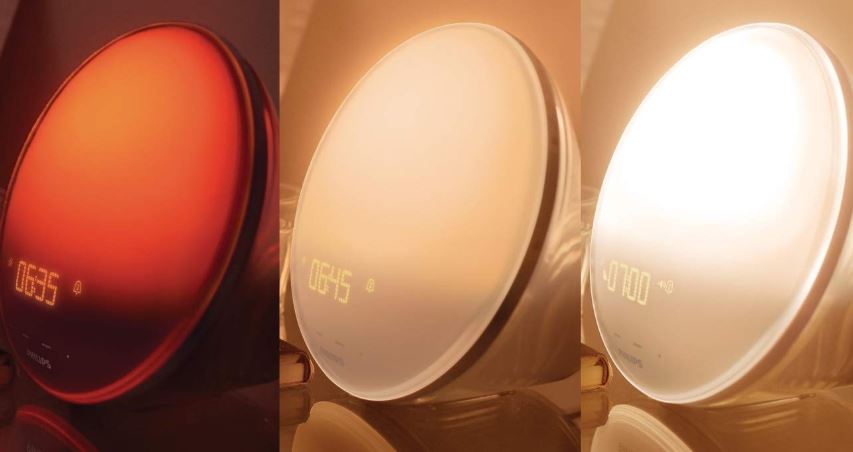 The Philips Wake-up Light Alarm Clock measures 5 x 7.2 x 7.2-inches, and weighs about one pound. The stand on its backside is fairly narrow, so it’s generally out of sight when it’s in view. When it’s turned off, it basically looks like a clock with a kickstand behind it. When you power it up, its luminescence gives it a totally different character.

It doesn’t have the same sunset features you’ll find inside the Somneo, but it does work as a bedside reading lamp that can be used before you call it a night. That’s because the lamp has up to ten brightness settings. And the light peaks around 200-lux. That allows this alarm clock to become pretty bright, but never places it at risk of becoming hot. 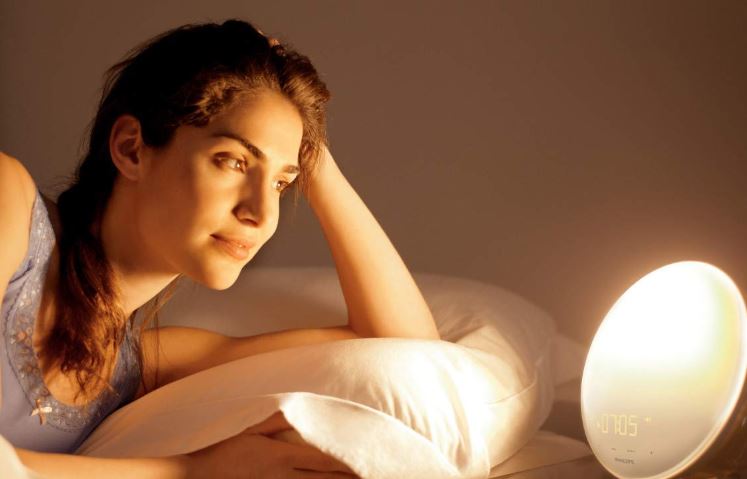 Similar to Somneo, this alarm clock works by gradually increasing the light it generates, until eventually the entire room is bright yellow. Though this alarm clock doesn’t have as many features as Somneo, it does use the same proven methods for helping wake people up with better moods.

The tap-to-snooze feature works in conjunction with a beeping sound, to let you know you’ve actually initiated the snooze. The display isn’t adjustable; you’re stuck with the default alarm clock format. With respect to music, there’s no FM radio, and there’s only one alarm sound and one wake-up sound.

The Philips Wake-Up Light Alarm Clock includes a 90-day guarantee, and a one-year warranty. Pretty nice for some extra peace of mind. 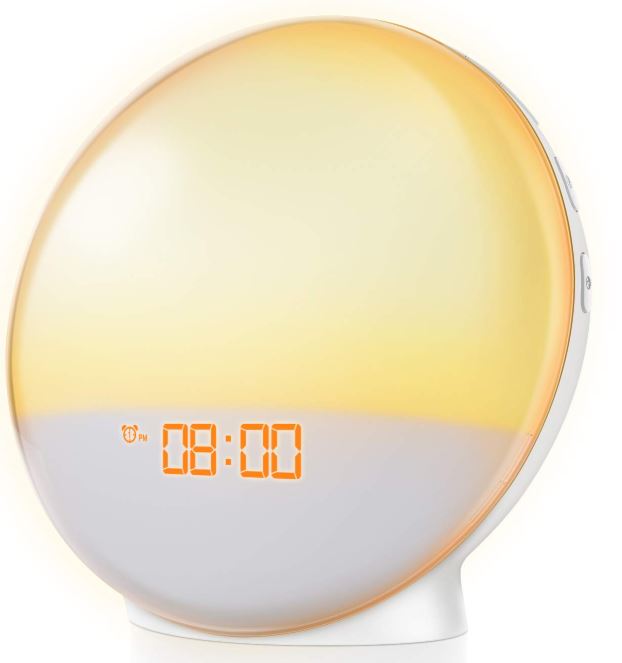 Sometimes you don’t have an outlet where you can plug your alarm clock. For times like that, you need what other sunrise alarm clocks can’t offer. Inside the AMIR Wake-Up Light is a fairly large 3600mAh rechargeable battery for wireless operation, and that’s really what makes this wake-up light stand out.

Another distinguishing thing about the AMIR is its multi-color design. While most wake-up lights restrict you to just one or two colors, AMIR can offer 256 RGB colors. Whatever the atmosphere in your room, you can change the AMIR to match. 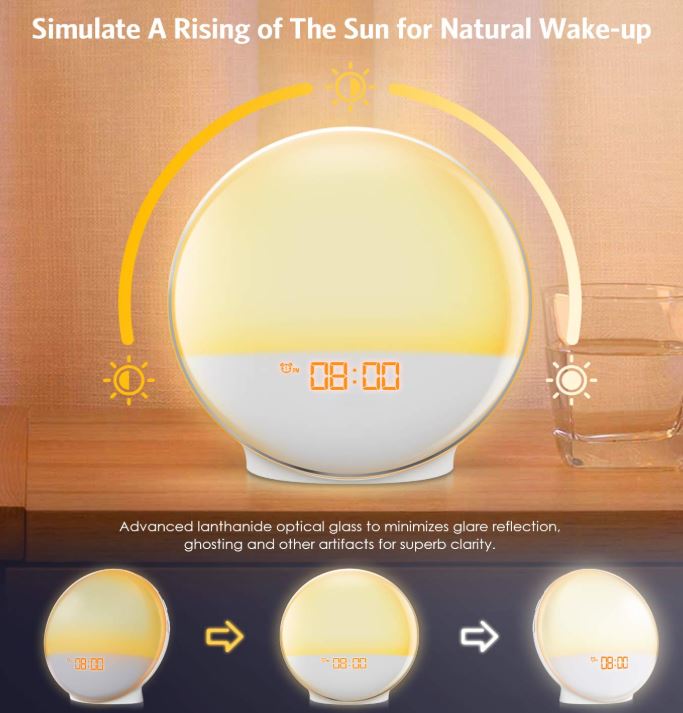 The AMIR Wake-Up Light measures 8.6 x 5 x 4.8-inches, and weighs about a pound. Its rectangular body stretches upwards, like a large glass of water. The AMIR Wake-Up Light supports five natural sounds. It has three brightness modes. And it uses a touch sensor to make operation in the dark pretty easy.

A single gray button, positioned near the top-center of the device, can be tapped to initiate one of three modes. Those include dim mode, mid mode, and bright mode.

The dim mode is pretty good using as a night light, or providing a small amount of ambient lighting for the room. The mid mode is more like a mood light. And if you tap to the bright mode, you’ll find it’s pretty good as a reading light. And even the brightest light isn’t so bright it will become disruptive to sleep patterns.

You may not have noticed at first, but like any alarm clock, the time is readable on the base of the light. Another thing that’s easy to miss is the speaker hidden away on the backside of the unit, while the bottom side hides the four touch buttons that allow you to adjust the clock’s settings. 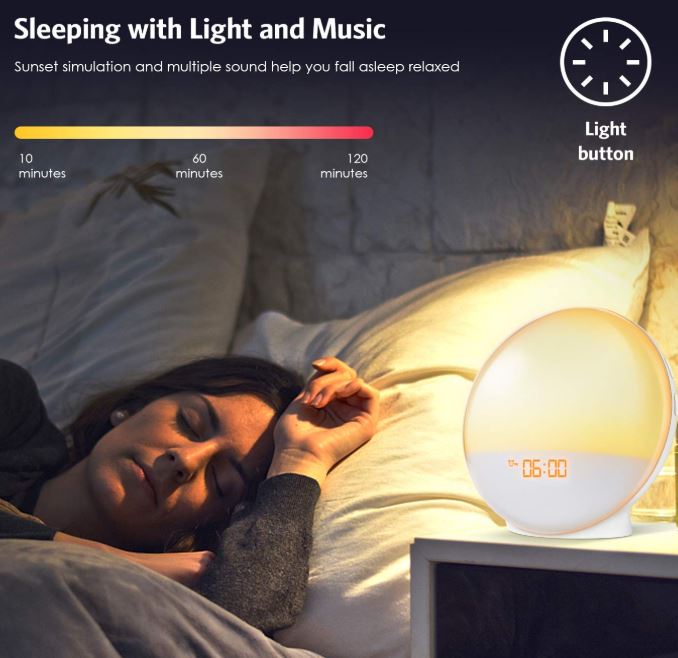 The AMIR can accommodate 20 level of adjustable brightness. When maximum brightness is achieved, after about thirty minutes of gently raising the intensity of the light, that’s when this alarm springs the audio alarms on you. AMIR’s bulb is estimated to have a lifespan of around 20,000 hours.

AMIR actually uses two separate bulbs in this clock. One is a warm white light, running at 3-watts. The other is an RGB light, also running at 3-watts. It’s worth noting its color temperature of the white bulb is 2900-3100K, which is on the warmer side. It’s a little suboptimal for waking up because you really want blue-white light when you’re waking up.

You charge this clock with a micro-USB cable, which is included. However, there isn’t a USB adapter included. You’ll need to connect the AMIR to a USB port from an adapter you already have, or from one of your devices.

The Philips Somneo is the right choice for someone who wants everything. It uses the right colors for waking people up, and it has a sunset feature to help you fall asleep. The aesthetic is incredibly modern. The sound options at your disposal are essentially limitless. The only thing to really dislike about this clock is it’s on the expensive side.

The Philips Wake-Up Light Alarm Clock is basically a lighter version of the Somneo. It has the same core functionality, helping gently bring someone from a sleeping state to consciousness with the use of light. But it has nowhere near the same level of sound support. If that’s fine with you, then the Philips Wake-Up Light Alarm Clock is an excellent bargain considering all the research and technology behind it.

Finally, the AMIR Wake-Up Light is inexpensive and functional. Though not as research oriented as the two Philips gentle wake-up alarm clocks, this alarm clock is the right choice for someone who needs a device that can function without an outlet. It’s also a great choice for someone interested in aesthetic because of all its color options. For affordability, style, and portability, the AMIR Wake-Up Light is the way to go.