Tesla was the first company to market a truly successful electric vehicle. Being the first to market, they faced a unique challenge: there was no charging infrastructure. They had to install thousands of charging stations all around the country. To this day, Tesla continues installing new charging stations and upgrading their existing hardware.

This was all great news for Tesla owners. But now that other companies are getting into the full-electric market, it presents a problem. Tesla’s charging technology was proprietary, so GM, Ford, and others needed to invent their own standard. The American car industry eventually settled on J1772, but most charging stations have a Tesla plug. That’s why you need a Tesla to J1772 adapter.

We’re about to review four of the best Tesla to J1772 charging adapters on the market. If you want a quick and dirty summary, here it is:

Of course, there are various other details that we’ll have to look at to render a fair verdict. Let’s get started, and see what we find out! 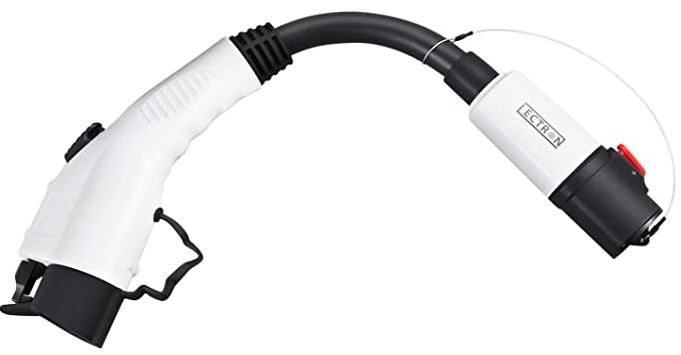 The Lectron Tesla to J1772 Adapter has a pigtail-style design. Instead of a solid adapter, it’s a short power cord with a Tesla female socket on one end. On the other end is a J1772 male socket. The total length is 17.2 inches, which can help you get a little more reach out of a charging cord. And at only 1.83 pounds, it’s not excessively heavy despite the cord. 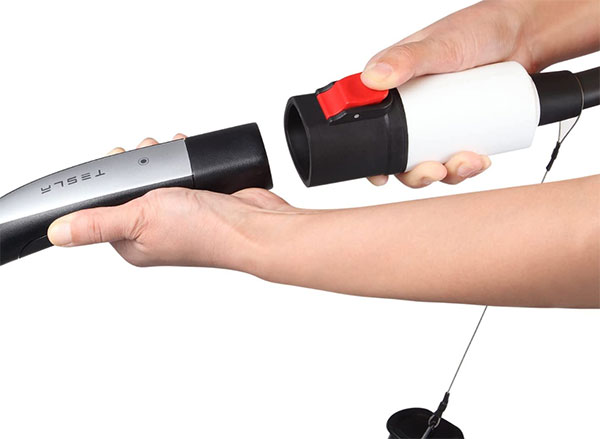 You can order it in two different variants. Both have a black cord, but the socket and plug can be black or white.

Using the Lectron adapter is straightforward. Plug the Tesla charger into the socket, and plug the J1772 plug into your car. Both will lock into place, and your car will begin to charge. The Tesla end of the adapter releases with a red button, and the J1772 end releases with a similar black button. 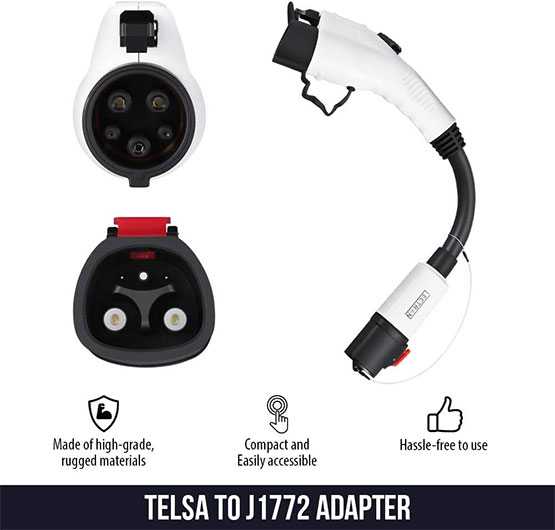 While this adapter has no official IP rating, it works fine in the rain. Use common sense and don’t leave it lying in a puddle. But as far as getting rained on, you won’t have any issues. There’s even a pair of rubber plugs to cover the openings at each end. The plugs are both tethered to the cable, so you don’t have to worry about losing them.

The power transfer rate of 40 amps and 250 volts is reasonably power. That’s as much power as you can get from the Tesla Destination Charger. It actually exceeds the maximum possible charge rate of the Tesla Mobile Connector. However, you’ll have a slightly reduced charge speed if you’re using the Tesla High Powered Connector.

Speaking of charging stations, this adapter will work with any 240-volt Tesla charger. The only system it won’t work with is the Tesla Supercharger, which outputs 480 volts. 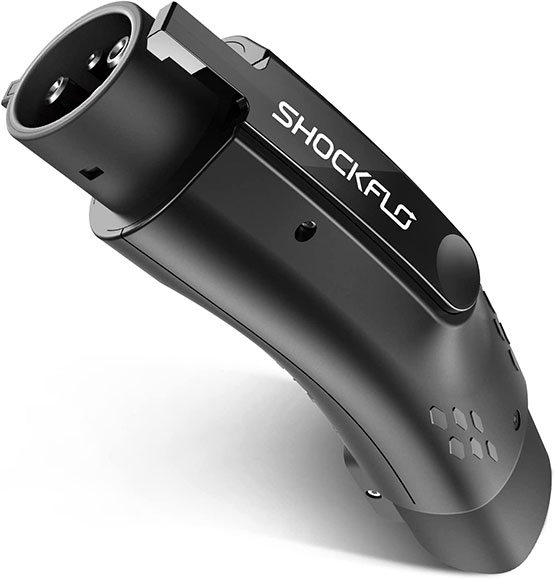 The ShockFlo J1772 EVs Adapter is a single-piece adapter that’s constructed from a matte black plastic. The profile is curved, with a total length of 9.25 inches and a diameter of 3.25 inches. At 0.95 pound, it’s so light that the weight is negligible. 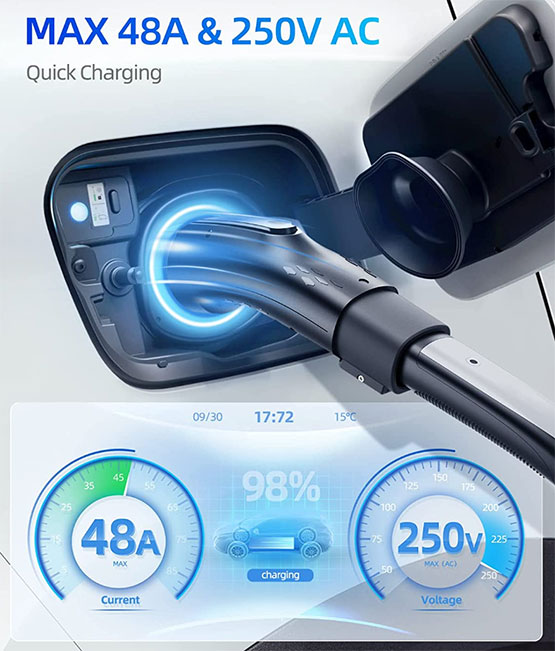 At the back end is a female Tesla charging socket, with a J1772 male plug on the front. At the charger end of the adapter, you’ll notice a small plastic slide. This is the locking mechanism, and it’s designed not to release by accident when you grab the adapter. The J1772 end has a standard release lever.

The housing is IP65-rated for weather-resistance. Not only does it stand up well to rain, but it’s entirely impervious to dust. 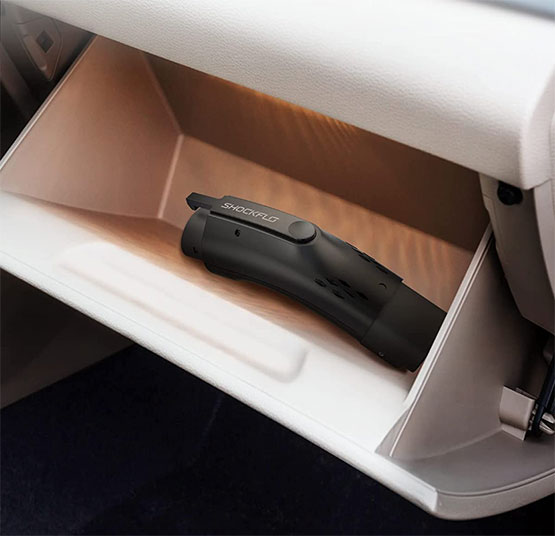 The ShockFlo adapter is capable of transferring 48 amps of power at 250 volts. That’s more than enough for any Tesla charger, with the exception of the Supercharger. You’ll be able to charge at full speed, and get back on the road as soon as possible.

You also get a 12-month manufacturer’s warranty. If the adapter fails prematurely, you’ll get a full refund or a replacement. 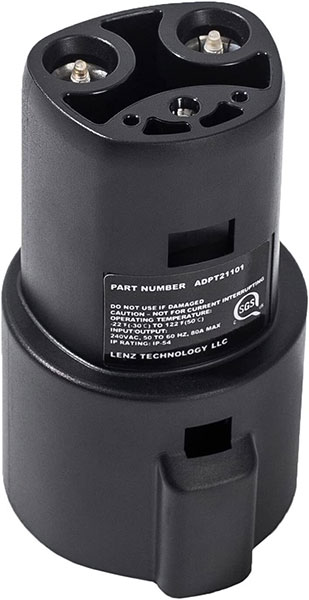 The LENZ J1772 to Tesla Charging Adapter is the oddball on our list. Instead of converting from a Tesla charger to a J1772 plug, it converts from J1772 to Tesla. This won’t help you charge your non-Tesla vehicle. But it’s a great way to charge your Tesla from a non-Tesla charger. And it’s compatible with all four tesla models: 3, Y, S, and X. You won’t run into any compatibility issues. 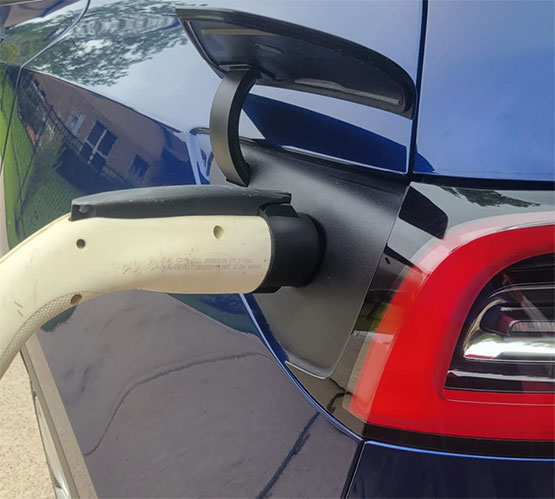 This adapter has the simplest design. The black plastic housing is straight and cylindrical, and it’s just about as short as physically possible. You can even keep it in your glove box if you want to. With a weather-resistance rating of IP54, you don’t have to worry about rain. And with a two-year manufacturer’s warranty, you don’t have to worry about any factory defects.

Both sides of the adapter have a standard locking mechanism, and it’s easy to hook up. First, plug it into your Tesla’s charging port. Then push the charging cable into the adapter until it clicks. If everything is working correctly, your car’s charging indicator should turn from blue to green. 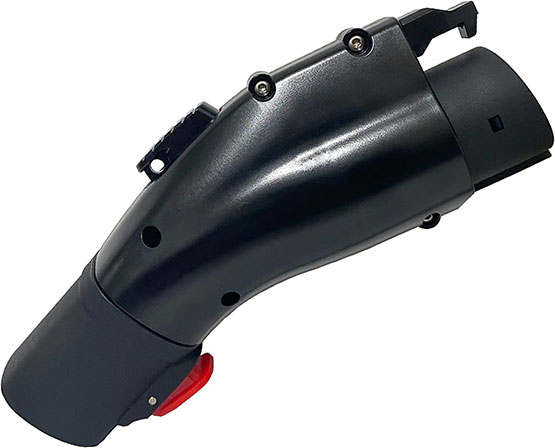 The HUUPRO Tesla to J1772 Adapter has a similar curved design to the ShockFlo adapter. It’s also roughly similar in size, at 9.25 inches long, 3.74 inches tall, and 2.36 inches wide. It sports a low-gloss black plastic housing, and weighs in at just 16.9 ounces. 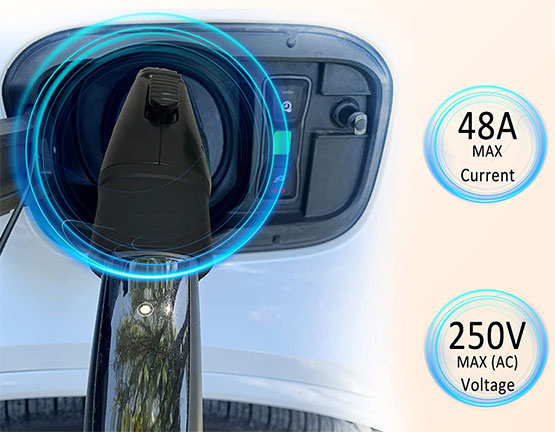 The IP55 weather-resistance will keep your adapter safe under any realistic conditions. It also has a secure locking mechanism. There’s a black lever release near the front on the top. The release lever for the female Tesla socket is located on the bottom, and is colored bright red for visibility.

This adapter can deliver 48 amps of power at 250 volts. As a result, it can work with any Level 1 or Level 2 Tesla charger. And with a 12-month manufacturer’s warranty, you’re covered in the event that it fails prematurely.

If your home car charger plugs into a regular wall outlet, you’re not getting the fastest possible charging. To speed things up, consider the Autel MaxiCharger. It’s a powerful Level 2 home charger that operates at 240 volts. It even has a J1772 tip, so you can plug it directly into your non-Tesla EV.

Until recently, Tesla’s charging technology has been proprietary. Since they were the first to market, they wanted people to have an incentive to buy their cars. Being able to use the most common type of public charger with no adapter was a big advantage.

In fact, it wasn’t until November 11th of 2022 that Tesla opened their technology for licensing. They’ve even renamed it the “North American Charging Standard,” or NACS. So you’ll probably start seeing non-Tesla cars with Tesla chargers in the near future. 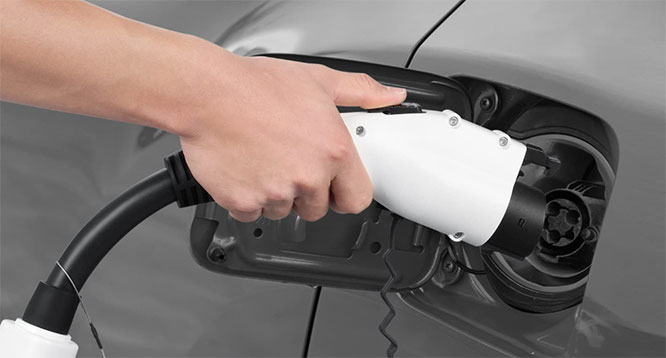 J1772, meanwhile, has been the default standard for North American automakers not named Tesla. It’s capable of providing slow charging in households or at public stations. Many locations like hotels choose J1772 connectors because of their universal nature. Tesla’s cars come with a J1772 adapter, so they’re still easy for Tesla owners to use.

That said, Tesla’s standard – or the NACS, if you want to call it that – is objectively better. For one thing, it offers faster slow charging capability. That’s especially important for home chargers, which need to run on 240 volts or less.

For another thing, fast charging is considerably easier. The J1772 standard requires a special connector, the CCS, which has been modified with an extra set of pins. It works, but it’s inconvenient, and the plug is also bulky. That’s why you’re likely to see a shift to the NACS in the near future. But in the mean time, it’s good to have an adapter.

All of these Tesla to J1772 charging adapters has something to bring to the table. But which one is the best choice for you? Here’s what we’ve learned today:

The Lectron Tesla to J1772 Adapter has the best physical design. The tips seem fairly rugged, and the rubber watertight plugs are a nice extra touch. We would have liked to see a little more amperage. You can’t get the most out of the Tesla High Powered Connector. But you’ll get full-speed charging on Tesla’s other 120- and 240-volt chargers. And the flexible cord in the middle makes it more convenient to plug everything in.

The ShockFlo J1772 EVs Adapter has slightly higher amperage. This allows you to get maximum-speed charging from the Tesla High Powered Connector. The design itself is pretty straightforward, but there’s one noteworthy feature. The slide lock on the Tesla socket makes it easy to handle the charger cable after it’s connected. It won’t accidentally pop loose while you’re plugging into your car.

The LENZ J1772 to Tesla Charging Adapter is different from the other choices. It’s designed for Tesla owners who want to charge from non-Tesla charging stations. The design is pretty basic, but it works as advertised and it’s easy to hook up. We also appreciated the ultra-compact form factor that’s small enough for your glovebox or center console.

Finally, we reviewed the HUUPRO Tesla to J1772 Adapter. This adapter is similar in most respects to the ShockFlo adapter. It has a near-identical form factor and the same charging performance. However, it has a more straightforward set of release buttons. If you value ease of use over a super-secure connection, you’ll be happy.