LEDs are inexpensive, powerful, and versatile. Compared to traditional bulbs, they take almost no electricity to operate. They’re often RGB compatible, giving you a customizable and cool aesthetic that’s hard to otherwise achieve. And that’s just the tip of the iceberg of reasons why LEDs are seeing implementation in everything from commercial housing to computer cases.

Cool aesthetic isn’t everything LEDs and to offer. They’ve also got plenty of practical applications, like helping illuminate under counters and other hard-to-see places. Whatever unique application you have in mind, there’s a set of flexible LED light strips out there suited to the task. But you have to know what you’re getting into. There’s no two ways about it; some LEDs aren’t built well. Plenty of cheap LED chips exist, and it’s not always obvious the ways in which they’re poorly designed.

You’ll want to begin by asking some basic questions. What is it you want to light? Where is the installation taking place? Do you want dim controls, remotes? Do you need any special coloring? What kind of materials are you lighting up? Even the presence of other lights in the area may affect your decision.

Lumens is a measure of how bright something seems to our eyes. For choosing the brightness of a strip, lumens and watts cannot be used interchangeably, but they do tend to correlate well. When possible, pay attention to lumens over watts. Lumens allow you to make comparisons from one strip to another. And you always need to contextualize that information. Lumens per foot? Per reel? Be sure you know precisely what’s being measured. 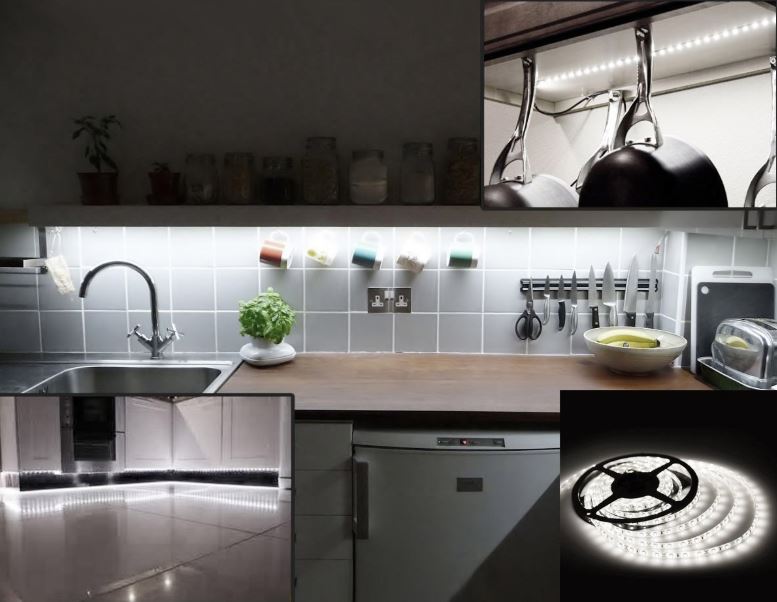 But frankly, few manufacturers bother to provide information about lumens, so you’ll be hard-pressed to find real comparisons. For people doing projects that require exceptionally bright lighting, you’ll have to take some extra steps.

In most cases, you’ll end up relying on wattage and anecdotal user reviews to help you learn more about brightness. When in doubt, it’s best to go brighter than you need because you can always run your equipment a little dimmer. Operating slightly under full power may even increase the lifespan of your bulbs.

Because most LED manufacturers aren’t going to provide figures for the amount of lumens produced by their strips, it’s not necessary to learn the specific lumen ranges for different types of application. As a good baseline of comparison, typical LED strips offer somewhere in the area of 300 lumens.

That’s great for accents, mood lighting, cabinet safety lighting, and essentially anything short of fully lighting an entire room. If you intend on using your flexible LED light strips as industrial lighting or task lighting, you’ll want to pay extra attention to lumen output. Others may need not be concerned.

If you plan on using white light, you’re going to have to think about color temperature. The color temperature of light is measured in Kelvin. It’s covers the range of cool orange-whites used in most homes to the sterile whites you find in hospitals. The correct choice depends entirely on the mood and atmosphere you’re trying to establish. For a board meeting where everyone should be alert, bright daylight 6,500K is generally optimal. For lighting a bedroom or relaxing evening atmosphere, a warmer 3,000K would be suitable.

Look specifically at the size of the strip relative to the number of LEDs on the strip. That gives you a foot per LED ratio, letting you know about the density of the light. Power consumption for all LEDs is relatively low, but that doesn’t mean you can ignore it. Look for wattage per foot. You may look at a reel that says 20-watts, only to discover they meant per foot of cord. It’s easy to get tricked by overlooking small details.

When it comes to installation, think carefully about how you intend to mount or setup the strips. Often it’s as simple as removing adhesive backing on the strips, and slapping them on a surface you’ve wiped down. But sometimes you may encounter more difficult installation requiring screwing or wiring strips, and for that you’ll want to know if instructions are present. You’ll also want to pay attention to the length of the strips, the voltage requirements, the general flexibility of the strips. Often times LED kits include installation screws and other extras, keep an eye out for those.

LEDs have the capability of lasting for years of steady use. But it depends on the quality of the build. Heat kills LEDs. Thermal management is the difference between getting 50,000 hours or 10,000 hours of your LED. And much of thermal management is achieved on the level of the LED chip itself, not solely on the heatsinks which surround it. In other words, the quality of the manufacturing matters. That’s hard to rate in an objective sense without getting deep into engineering, but it’s something usually well-reflected in user reviews. 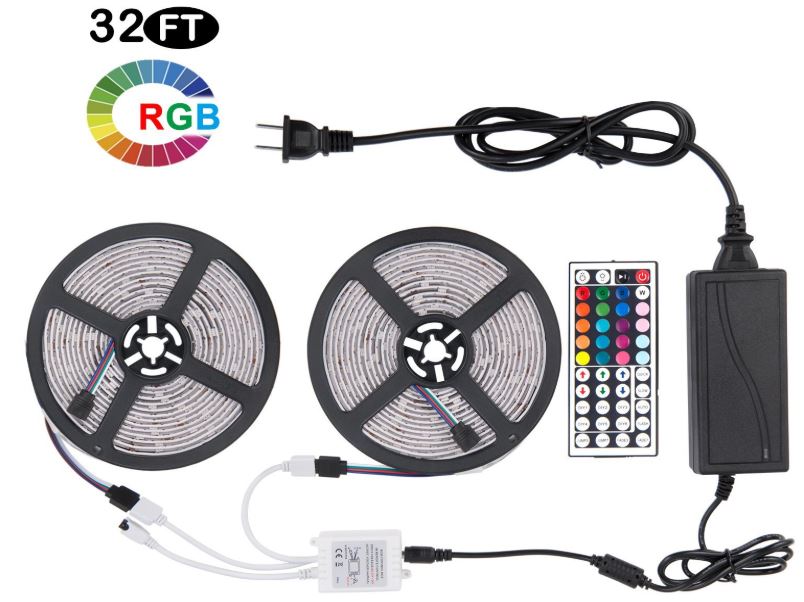 The Sunnest flexible LED strip light kit includes two 16.4 foot reels, totaling 32.8 feet lf LED strips. Each strip contains 300 LEDs, providing enough illumination for everything short of task lighting. Power consumption is about what you’d expect from a kit of this size, taking 120 watts to fully power both strips. From color to strip length, these strips are fully customizable. And their highly flexible design makes them easy to install even in tight spaces, like within a vehicle or PC case. 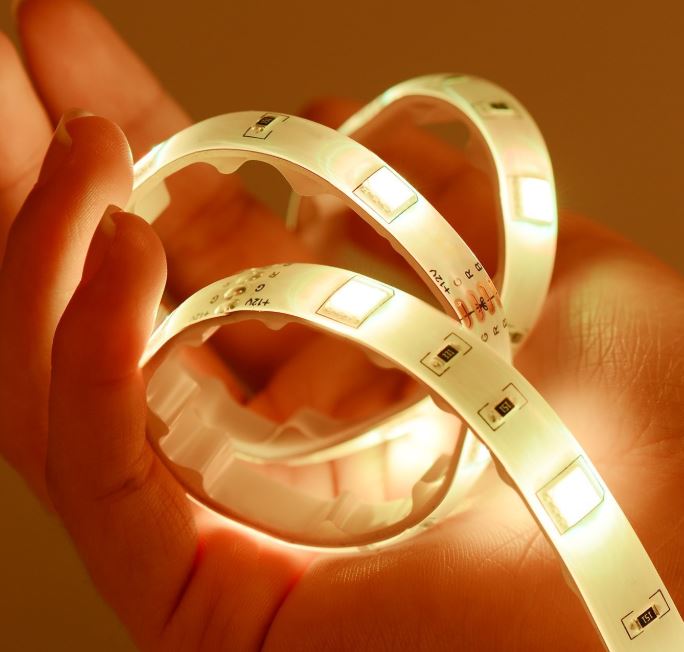 These strips can be sliced every 3 LEDs for a fully flexible install, provided only that you’re ready to start wiring a few connections together. Installation is as simple as sticking to a surface. And Sunnest strips are IP65 waterproof, making them perfectly suitable for use outdoor use. But the IP65 rating doesn’t mean these strips are necessarily going to hold up to submersion, so don’t plan on putting in your pool or aquarium. Furthermore, the included power adapter and 44-key IR remote aren’t waterproof, so plan accordingly.

On the remote, you’ll find 20 preprogrammed color options which can be viewed through 8 play modes. The play modes are more or less what you’d expect, including strobing, flash patterns, and so forth. You can also toggle between 8 brightness levels, for a relatively wide degree of control over the visual presentation, and electric use of your setup. 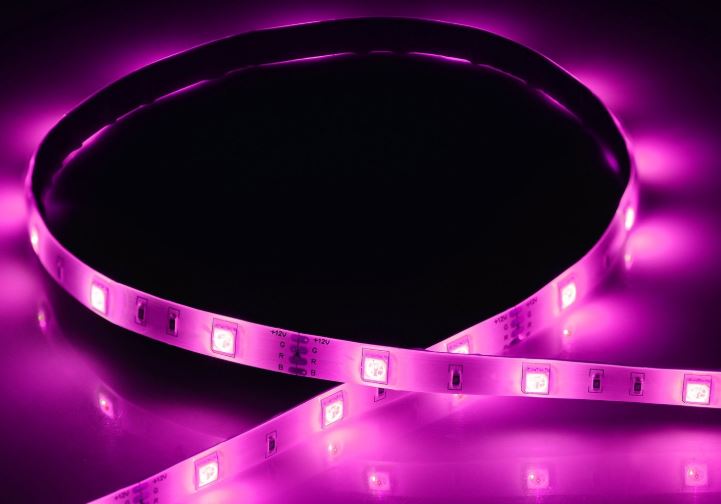 But the remote’s range is relatively limited, sitting at only 23-feet. And since it’s an IR remote, you’ll need direct line of sight between the remote and the sensor to make adjustments. The remote might be best compared to an old TV remote because it’s essentially the same technology. Thankfully, the remote uses very little battery power, so you won’t find yourself dealing with batteries very often.

Sunnest strips are great for decoration or practical lighting, and they’ve got highly effective heat disputation. The otherwise standard 12V LED strips are paired with a thermally conductive adhesive, which enhances safety along with ease of use. 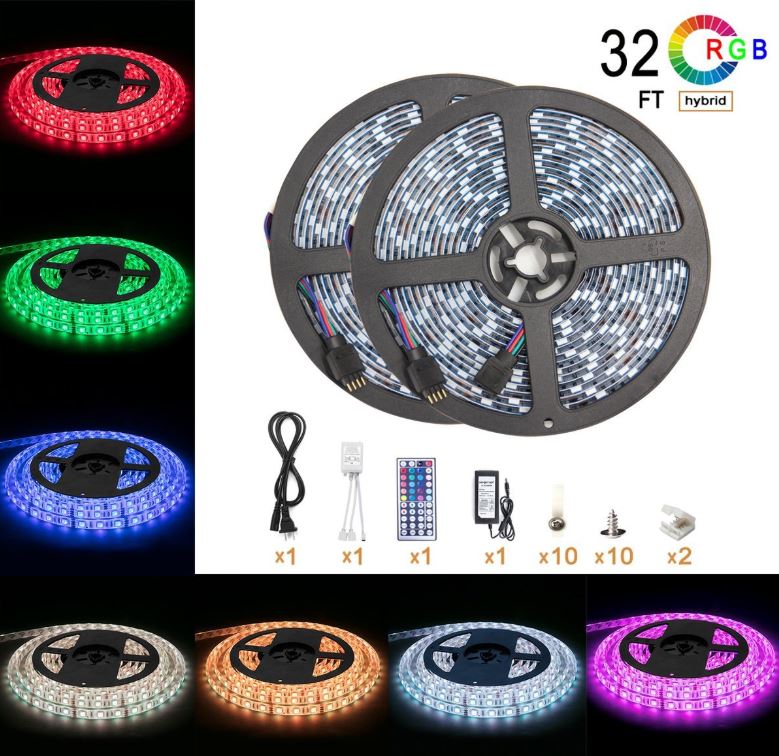 Rather than breaking into two separate strips, Daybetter’s LED strips are 600 LEDs rolled into one lengthy 32.8-feet of strips. Within the strip you’ll find color changing RGB LEDs, and which are noticeably brighter than most strips in this range. As with Sunnest strips, these Daybetter LED lights enjoy IP65 waterproof protection, making them good for setting up outdoors. 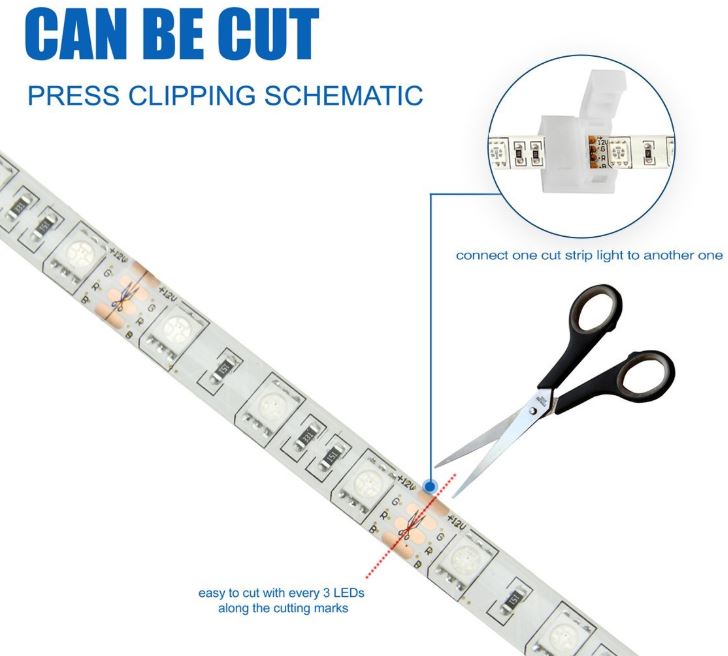 Much of what you’ll find about these strips is on the higher end of what should be considered standard. These LEDs offer a 50,000-hour lifespan, which is optimal for people concerned about maintenance. Each LED is cut-able and linkable with the standard 3-LED strip distance. And you can control most aspects of the presentation with the included 44 key IR remote. 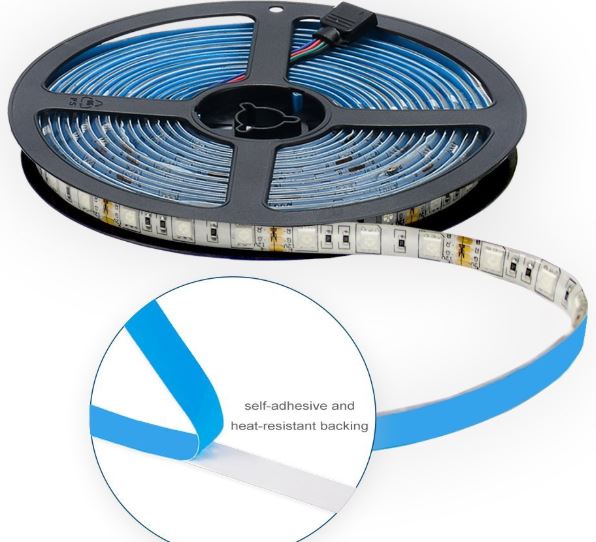 Getting started is hardly any more difficult than plugging in the included 12V power supply. The installation of these strips is largely easy, thanks to their adhesive backing. And this kit also includes a handful of screws and card clamps that can the used for installation

It’s worth noting that the 32.8-feet strip is delivered on a single roll. That can be mildly convenient or inconvenient, depending on the size of the project you have in mind. The included instructions aren’t very good, so you’ll want to know what you’re doing, be willing to look elsewhere for instruction, or be ready to struggle through the setup on your own. 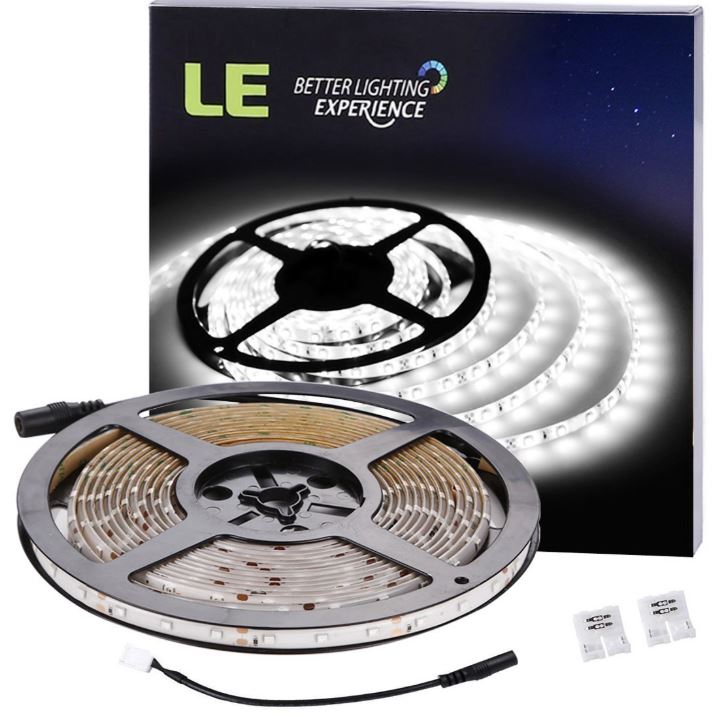 Much of the Lighting EVER Flexible LED kit is ordinary. It includes a single 16.4-foot strip of RGB LEDs, composed of 300 individual LEDs. That works out to about 18 LEDs per foot, which is about average for LED light strips. Power consumption is ordinary as well, with a typical 12V construction. But what makes these strips stand out are their use of 6000K daylight white LEDs, providing the brilliant white light that warmer-colored strips can’t provide. 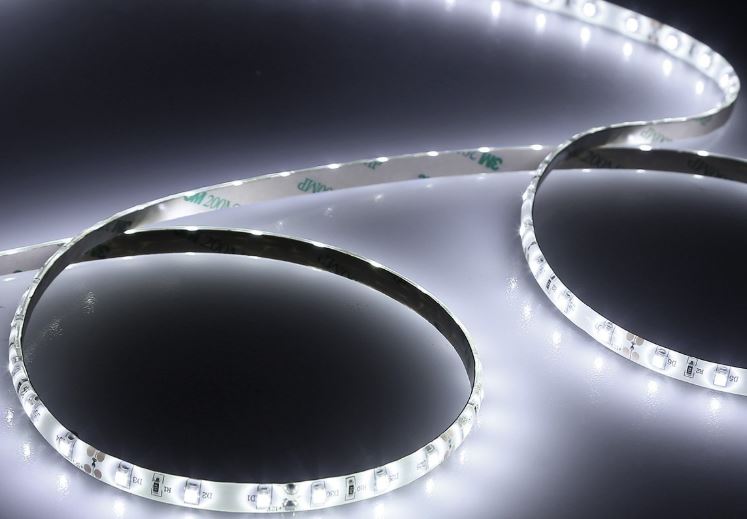 Color temperature aside, Lighting EVER Flexible strips are highly flexible, making them great for designing around bendable and angled patterns. Each strip is built to be fully IP65 waterproof, ready to handle the elements wherever you might apply them. Making things even simpler, the self-adhesive back for installation, allowing the process to be safe and easy. And the strips can be cut every 3 LEDs, like most flexible LED light strips. 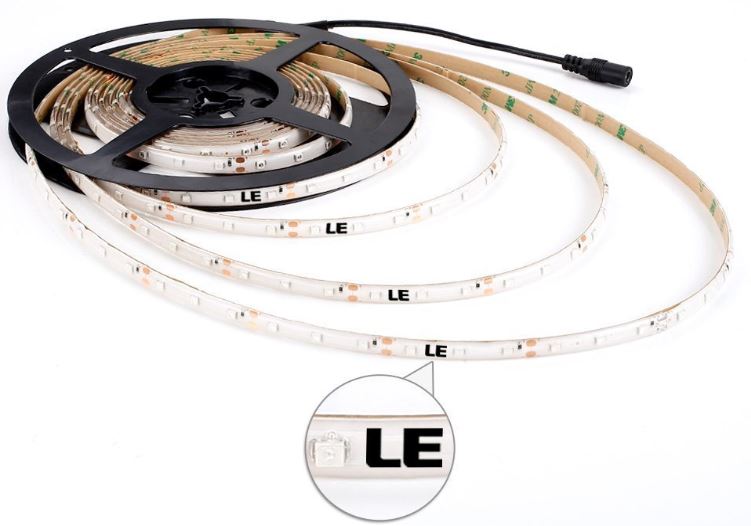 You may notice the Lighting EVER Flexible LED kit is incredibly cheap. Part of the reason why is because no power adapter is included in this kit. That makes this setup an excellent value for anyone who doesn’t need a power adapter, or only needs extra lights to add to an existing configuration. But even for people who don’t have a power adapter, Lighting EVER has an adapter that can be purchased separately.

Sunnest Waterproof Flexible LED strips have enough colors and play modes to for most people to find what they want. They’re especially good at thermal dissipation, making these the perfect choice for people who are extra safety-minded, or otherwise have a reason to be worried about heat.

Daybetter LED strips are exceptionally bright and long-lasting. The options color patterns are extensive, and the LEDs themselves are distinctly high quality. The quality of the LEDs alone warrants Daybetter a spot amongst this list, their construction has an excellent price to performance ratio. You get all the essential features with none of the fluff, making these the strips for bargain seekers.

Finally, Lighting EVER Flexible strips are good for people who have a power adapter already, or are adding on to an existing LED kit. If you’re looking for daylight whites around 6000K, you have even more reason to pick these strips. They’re particularly flexible strips, and ideal for people who are using angled, bendy patterns with their LED designs.