We spend a lot of time reviewing the latest technology. It’s what we do. But every once in a while, something comes along that surprises even us. Flash memory was one of those advances.

Now that flash memory has been around for years, it seems like something we take for granted. But not that long ago, storing more than a few megabytes — yes, megabytes, not gigabytes — required a HDD. This was clunky solution, particularly as files started to get larger. Manufacturers like iOmega tried innovative technology like the Zip Drive. At the time, getting 750 megabytes of storage on a floppy disk was as impressive as, well, the technology we’re about to talk about.

But then came flash memory. Using quantum technology, we can now store tens of gigabytes on a small SD card. In itself, this has been a huge advance, as anyone with a digital camera will gladly tell you. Being able to snap pictures all day without worrying about silly things like memory is very convenient.

Nowadays, some manufacturers have taken SD card technology a step further. They’ve begun to include WiFi technology in their cards. For many devices, this is unnecessary. For example, modern smartphones invariably support WiFi technology. But many cameras don’t, and adding this capability can allow you to take advantage of additional features.

Since WiFi SD cards have started to become popular, we’ve done our own reviews. Most recently, back in January, we updated this article. But even in these few short months, manufacturers have been adding new features. Today, we’re going to take a look at two WiFi SD cards that have been upgraded since our last review. 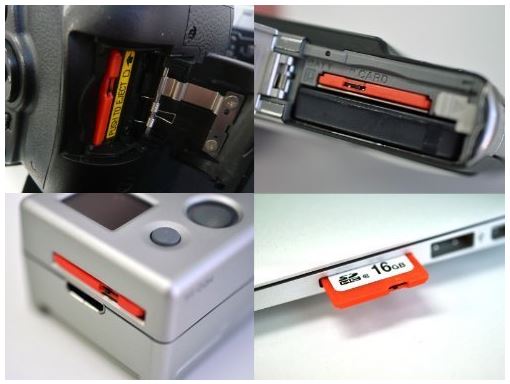 When Can I Use a WiFi SD Card?

One important thing to keep in mind is that we’re talking about SD cards, not Micro SD cards. While full-sized SD cards can use WiFi technology, it’s not yet available on Micro SD cards. This is an important distinction, since many SD-enabled devices actually use Micro SD. That said, depending on your device, all hope is not lost.

For larger devices, one option is to use a USB WiFi adapter. These are a bit clunky to use with your cell phone or camera, but they can get your old laptop connected in a jiffy. And they don’t occupy an SD card slot. So if you’re actually using your SD card for transferring data, you won’t have to worry about losing connectivity while you’re swapping your card.

Another problem many people face is that it’s impossible to use their wireless device on the road. If portability is your biggest concern, consider a car WiFi system. These systems allow you to connect to the internet any time you’re in range of your car. They may not work for everybody, but if your job requires you to drive a lot, they’re a solid choice.

Now that we’ve looked at some alternative options, it’s time to get into the meat of our review. Let’s take a look at the Toshiba FlashAir and the ez Share. We’ve reviewed earlier versions of both of these offerings. But in that time, a lot has changed, and there are several new features, including enhanced memory capacity. Now, we’re going to take a deep dive into their features, benefits, and drawbacks. Let’s get ready to rumble! 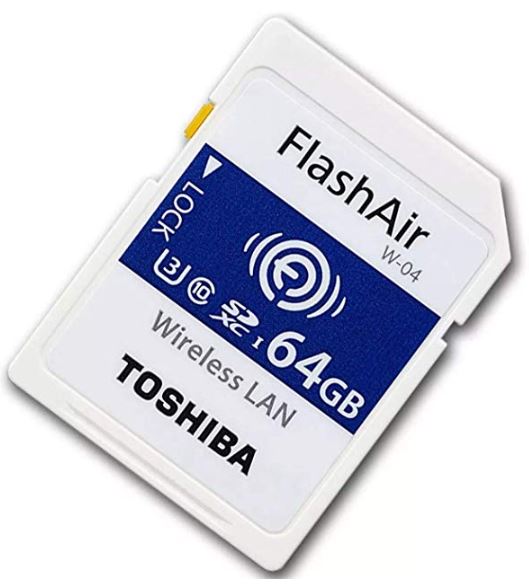 The Toshiba FlashAir is an SD card with a maximum 64GB capacity. It weighs only 2 grams, and at first glance it looks like only a regular SD card. And, in a sense, it is. Even if you have no WiFi needs, you can still use the FlashAir to store your data. With a write speed of 70 MB/s and a write speed of 90 MB/s, it’s certainly no slouch. However, there are plenty of SD cards on the market that offer fast read/write times. Far more important for our purposes is how the FlashAir performs on a wireless connection. Let’s take a closer look at what it’s capable of.

To begin with, the FlashAir is advertised as a plug-and-play solution. And, to be fair, it comes pre-formatted in exFAT format, which is compatible with both Windows and iOS. In this sense, it’s truly plug-and-play. Insert it in a Windows, iOS, or Android device, and you’ll instantly be able to use it for data storage. Additional steps are necessary if you’re trying to use the FlashAir for its intended purpose. To activate the WiFi, you’ll have to utilize the FlashAir app to get the FlashAir to pair with your device.

The FlashAir app is available on both iOS and Android. To install it, you simply need to download it for free from Google Play or the Apple Store. From there, if you want to use the FlashAir as a wireless adapter, you’ll need to have the app loaded. You can still use the FlashAir for storage without the app running, but it won’t connect to the internet. However, there are several other advantages to running to the app. 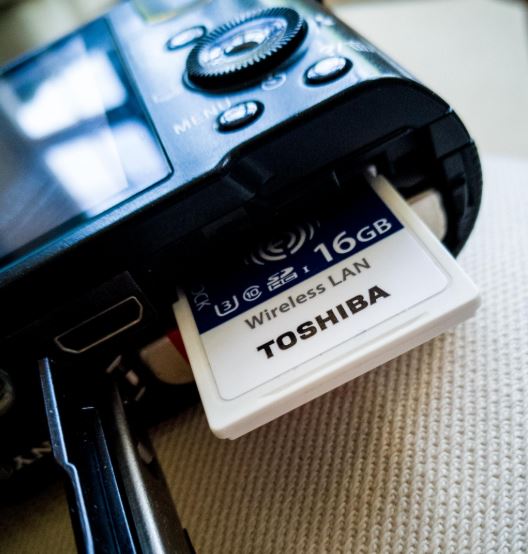 These go above and beyond the value of using the FlashAir for WiFi. As a result, it’s a good idea to install the app, whether or not you actually need the wireless connection. That said, there’s really no reason to use the FlashAir as a standard SD card. So the app is basically part of the package if you want full functionality.

One useful function of the FlashAir app is that it can be installed on multiple devices simultaneously. This is the case even for devices that don’t utilize the FlashAir SD card. The app allows you to automatically share photos, instantly, in real time. What this means is that if you snap a picture on a device with the FlashAir installed, the photo can be viewed instantly on your other devices. All in all, you can install the FlashAir app on seven different devices. So sharing photos with family will be easier and more painless than ever. 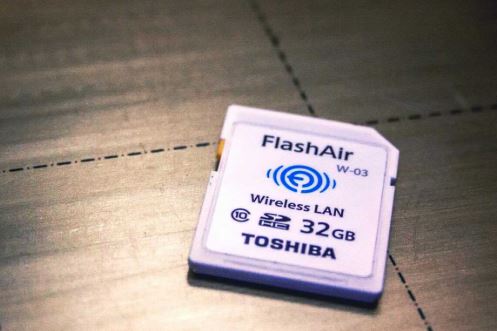 The FlashAir is compatible with multiple browsers, including Internet Explorer, Safari, and Google Chrome. As a result, it’s a solid choice for just about any device. However, check with your manufacturer to make sure you’re running the correct browser. Depending on your exact device, using the wrong browser can result in some finicky behavior. Pass-thru mode sounds fancy, but it’s just another way of saying you can use your FlashAir as an SD card and a WiFi card at the same time. This means you can continue to snap pictures even as you share them. And your connection won’t drop or lag just because you’re reading or writing.

The FlashAir also supports “Eyefi Connected” mode. This is yet another simple feature with a fancy name. What is means is that it will prevent your camera from powering off while you’re on a wireless connection. So you don’t have to worry about your camera automatically powering down while you’re in the middle of uploading. The FlashAir also comes with an impressive 5-year manufacturer’s warranty. It covers all errors in parts and workmanship. Be aware, though, that it does not cover accidental damage or abuse. 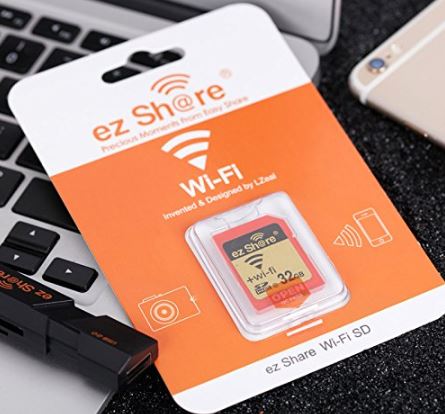 While Toshiba is a well-known, established brand, ez Share is somewhat less well-known. This brand is owned by LZEAL Information Technology Company, a Chinese computer parts firm. But despite being made in China, there’s still plenty to like. The first thing you’ll notice is the unique orange color of their SD cards, as opposed to the standard black. This is a throwback to EYE-Fi, the original WiFi SD card manufacturer, and it’s a worthwhile tribute. But color and design don’t tell us much about overall quality. To determine that, we need to look under the hood and see what the ez Share is actually capable of.

In terms of raw storage, the ez Share comes in several sizes. In addition to the base 16GB version, there are also 32, 64, and 128GB versions available. While this might not be as impressive as some newer, 256GB SD cards, it’s important to keep things in perspective. WiFi SD technology is a marvel, but it’s not a miracle. The WiFi hardware needs to fit somewhere, and this limits how much space can be dedicated for storage. Still, 128GB is a lot of space, and many amateur photographers make do with a 64 or even 32GB card. 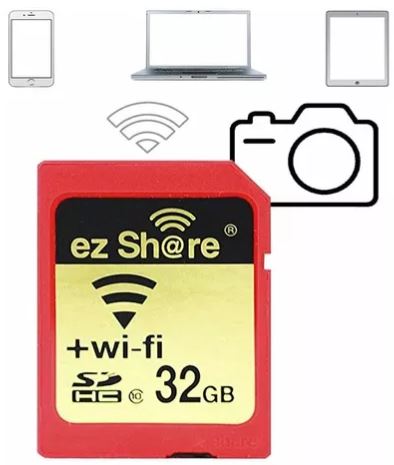 Read speeds come in at about 19 MB/s and writing clocks in at about 10 MB/s. This is fairly slow for a modern SD card, but it’s still – barely – fast enough to maintain a designation as a Class 10 storage device. Nonetheless, this is an important metric. A Class 10 storage device is capable of recording 1080p video, while lower classes are not. By meeting this threshold, the ez Share ensures that it will remain relevant for all your recording needs.

The free ez Share app is available on Android, iOS, and Windows. This means it’s capable of working on just about any device on the market. And that’s fortunate, since you won’t be able to get the most out of your ez Share without the app. Once it’s installed, you’ll be able to access several worthwhile features, in addition to basic WiFi. You’ll be able to edit your photos directly on your device. And you’ll have far more options than you’d get from a standard cell phone or camera photo app. 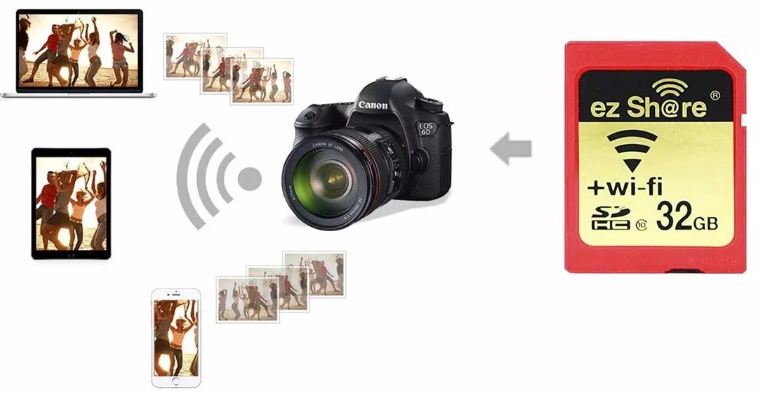 By default, the ez Share is always on. However, there’s a physical on/off switch, which can be used to disable the WiFi when battery life is a concern. You can also turn push notifications off if you desire. This won’t deactivate your ez Share WiFi hotspot. However, it will keep your phone from pinging every time you take a photo.

Also, there’s one thing you should be aware of regarding the connection. The ez Share will only sync with your phone or other devices if they’re connected directly through the on-board WiFi. This may be a concern if you prefer to use your phone’s data connection for other things. For example, social media, MMS messaging, and other basic features will suddenly depend on your ez Share’s connection.

So, which WiFi SD card is the best? At first glance, it’s tough to make a decision. There’s only so much one of these products can do to differentiate themselves. And they’re both very well designed, so we’re basically counting angels dancing on the head of a pin. Still, there are a couple of differences that are well worth considering.

To begin with the FlashAir’s app has an edge, but only by a hair. While the ez Share can connect to 5 devices simultaneously, the FlashAir WiFi SD Card can connect to 7. Their app is also more intuitive and easy to use. That said, “intuitive” is a subjective term. Suffice it to say that for most people, the FlashAir app will have an easier learning curve. But either way, the apps are more or less equivalent, especially in terms of functionality.

However, the ez Share WiFi SD Card wins out on capacity. While the FlashAir is limited to 64GB, the ez Share is available with up to 128GB of space. Obviously, this depends on which size you decide to buy. Still, if you’re a serious photo bug who needs lots of memory, the ez Share is a better choice.