Everyone wants the fastest, most reliable, and best performing computing power available. Having a high-end motherboard is crucial if you want to play all the latest games and applications without lag or performance issues. Before we get into looking at three best z97 motherboards of 2016-2017, for the purposes of those who may just be starting out or need a refresher on motherboards, we’re going to cover what they are and why they are all so different. 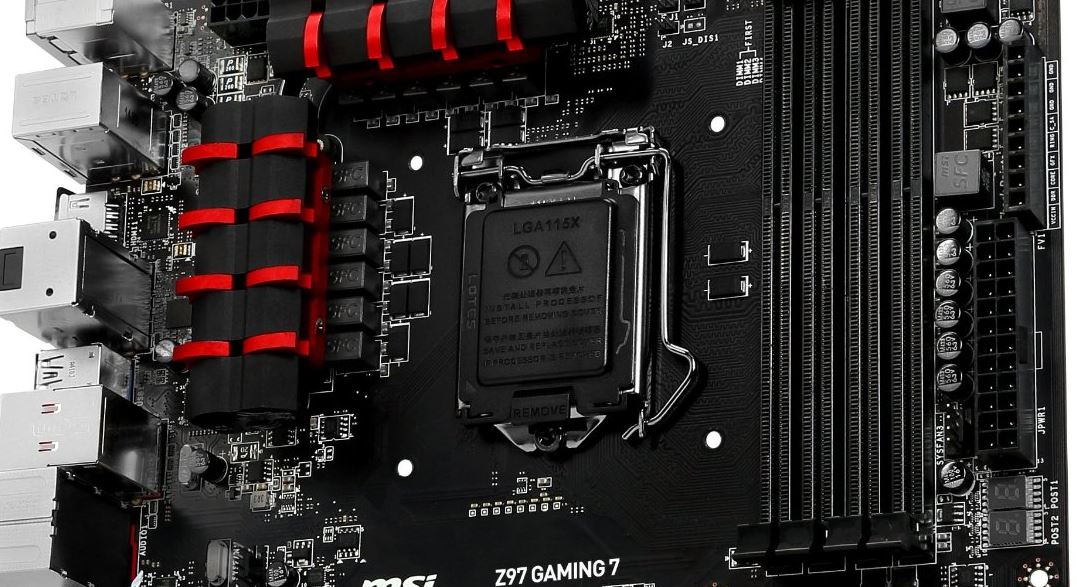 First, let’s go back in time before motherboards, when a computers main parts were connected through multiple individual printed circuit boards (PCB) which is basically a term for a circuit board that has been etched or built in a way to allow connections between the parts. However before motherboards all of the parts such as the Central Processing Unit (CPU), peripherals and memory were housed on different printed circuit boards and connected to each other by a backplane which, prior to the inclusion of microprocessors, was the most efficient way of doing it prior to the late 1980s.

Towards the end of 1980 and the start of the 1990s, through the introduction of the personal computer and many other innovations in computer technology, the size of the backplane became uneconomical to run the functions of the computer. Also, the motherboard was introduced as a smaller but still functional backplane, with the purpose of connecting all the peripherals, CPU and other parts of the computer together.

Flipping the pages to computers today, motherboards have played a very important role in improving gaming and computer graphics due to its ability to house all the parts required such as graphics card, video cards, etc without the need of wasting space on expansion cards. The z97 of 9 series, have a number of new benefits with the most major being upgrades in speed of storage and communication between parts of the computer as well as the obvious ability of being able to handle the better CPUs and RAM of today. For gamers, having a good motherboard does not have immediate impact, it is more around what is used through the motherboard and having a good motherboard means your computer will be able to handle the most complicated messages it gets thrown as quick and efficiently as possible. Now let’s compare some of the best rated, fastest z97 motherboards for 2015-2016. 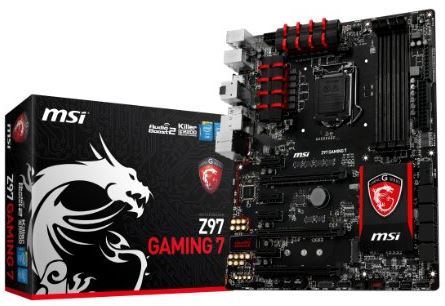 After all that information you’re probably thinking, what really can a motherboard offer my gaming that other parts can just do themselves. As we touched on earlier, it is the bundling of functions to save space for other parts that is the main benefit of a motherboard and this is seen through the MSI ATX DDR3 2600 LGA 1150 Z97 Motherboard.

Audio Boost 2
The MSI Audio Boost 2 is great for gaming for a couple of reasons. The first being that the way it is built minimizes the distortion of sound by the electromagnetic signals coming from other parts of the computer, so the Audio Boost 2 acts as a dedicated sound card through the separation of the path on the circuit board. Sound Blaster have also got a part on here with their SB Cinema 2 for that excellent surround sound experience. The inclusion of a dedicated power input, dual headphone amplifiers, high quality audio capacitors and golden audio connecters all guarantees better sound quality.

E2200 Game Networking
The E2200’s primary function in the MSI Gaming 7 motherboard is to detect traffic on the network that belongs to gaming and accelerate it ahead of other traffic ensuring no lag and latency for the ultimate gaming experience. 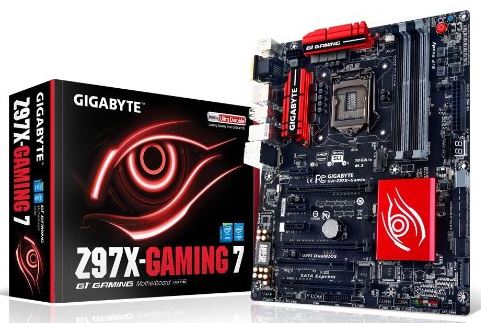 AMP-UP Audio Technology
Similar to the MSI Gaming 7, sound quality is something that motherboards will need to drive in order to compete with other brands. So how do you beat other audio tech in the market? Well we saw with the MSI Gaming 7 motherboard they had Sound Blaster tech included, but the Gigabyte GA-Z97X-GAMING 7 goes a step further and includes a full software suite with the Sound Blaster X-Fi MB3 to enhance the audio from your gaming. Other than this, the audio for the Gigabyte Gaming 7 is almost identical to MSI’s.

E2200 Game Networking
Any motherboard without the E2200 almost fails in comparison to these motherboards purely from a gaming perspective. You’d be crazy not to purchase a motherboard for gaming without this great feature.

Overclocking Technology
The MSI Gaming 7 had an overclocking function but not like the Gigabyte Gaming 7. The Gigabyte App centre which includes EasyTune and Cloud Station are two added functions we love about this motherboard. The EasyTune Application removes the hassle of overclocking your motherboard externally and allows you to adjust system and memory clocks and voltages in a windows environment. The Cloud Station allows you to connect all your other devices to the computer. 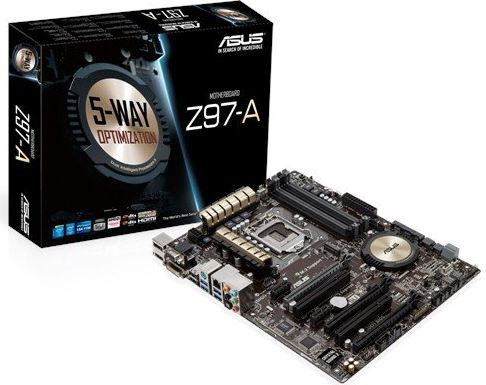 The standard between many of the previously mentioned motherboards in the 9 series, is that sound quality is a must, networking booster, the inclusion of M.2 and SATA Express to get the most out of your SSD card an utilize the motherboards speed and we believe that the ASUS Z97-A ATX DDR3 2600 LGA 1150 Motherboard sits somewhere in between the two above.

Software
The software that stems from the ASUS z97 is a selling point for the product. With software suites that include ‘Remote GO’ which is a cloud platform for PC mobility, Turbo LAN functionality which allows users to control the traffic on a PC claiming 1.4 times better than competitors and the media-acclaimed UEFI BIOS which is their overclocking software which has both the beginner and advance availabilities for those who have never overclocked the motherboard before and those that invented it.

Build-it-Yourself Made Very Easy
ASUS has made building your gaming PC extremely easy with this motherboard. The motherboard is set up knowing what you’re going to put into it with the intention of build-it-yourself gamers. We also love the inclusion of the Q-Connector plug which connects all the Power, Reset and other wires into one plug, which fits smugly in its designated slot. They have made this motherboard for both the budget conscious as well as the build-it-yourself gamer. 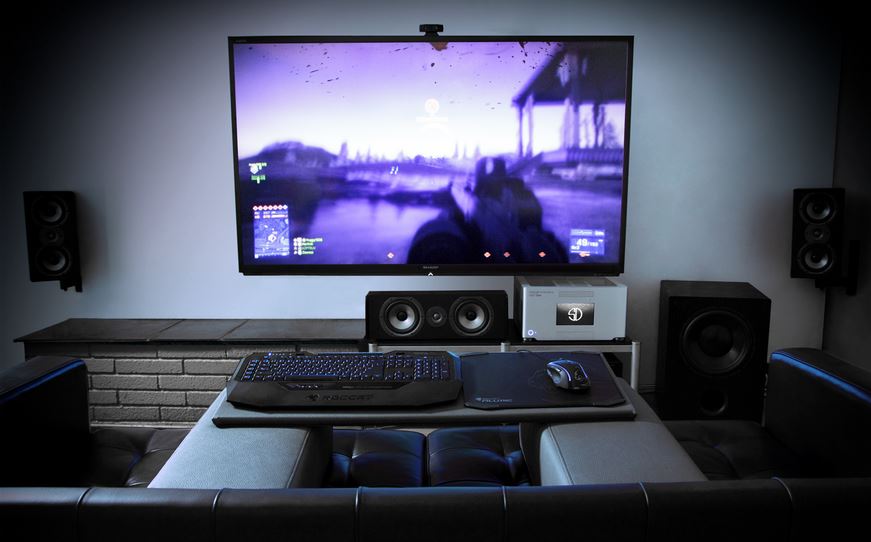 If you’re a gamer, there are certain features you can’t do without, which all of the above do such as audio quality, utilization of speed and overclocking tech, so it really comes down to what you’re purchasing the motherboard for. Budget conscious would stick to the MSI, build-it-yourself would go with ASUS and the gamer who wants the ultimate gaming experience would pay extra for the GIGABYTE’s z97.