It doesn’t take much to understand the appeal of mobile gaming. But playing from your smartphone, or playing from a handheld device, isn’t quite the same as playing from a console. The graphics are toned down, the size and scope of the games are limited, and the titles you can play aren’t the same.

Even if you’re not a dedicated console gamer, and you’re willing to look at laptops and similar devices for your gaming interests, there are reasons to hesitate. Gaming laptops are grossly expensive, and they have a lifespan that’s often embarrassingly worse than the lifespan of a console.

So it’s no mystery why a number of different brands have tried to help transform gaming consoles into something a little more portable. That includes Buddah Tek. Though they’re not exactly a household name, but these days a lot of lesser known brands are releasing some pretty powerful gaming tech. 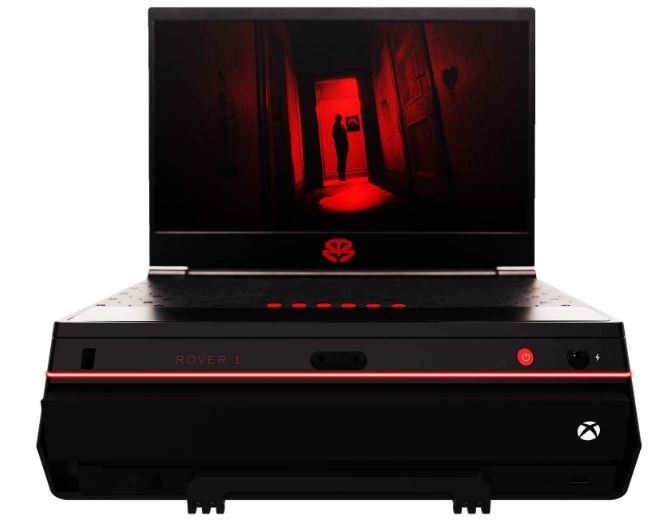 Insert your gaming console, connect it up with an DMI cable, and power things with USB. From there, you’re ready to open the top of the Rover and reveal the large LED based display. That’s supposed to allow you to play your games anywhere you want, basically.

The Rover 1 is basically a big box with a screen on top, allowing you to transform your gaming console into something that’s a bit more like a portable gaming station. It would be an exaggeration to say this is a laptop, but it’s certainly in the same neighborhood as laptops. But what really makes the Rover 1 such an intriguing idea is that this box is capable of multi-platform support. But how well does it really work in practice? 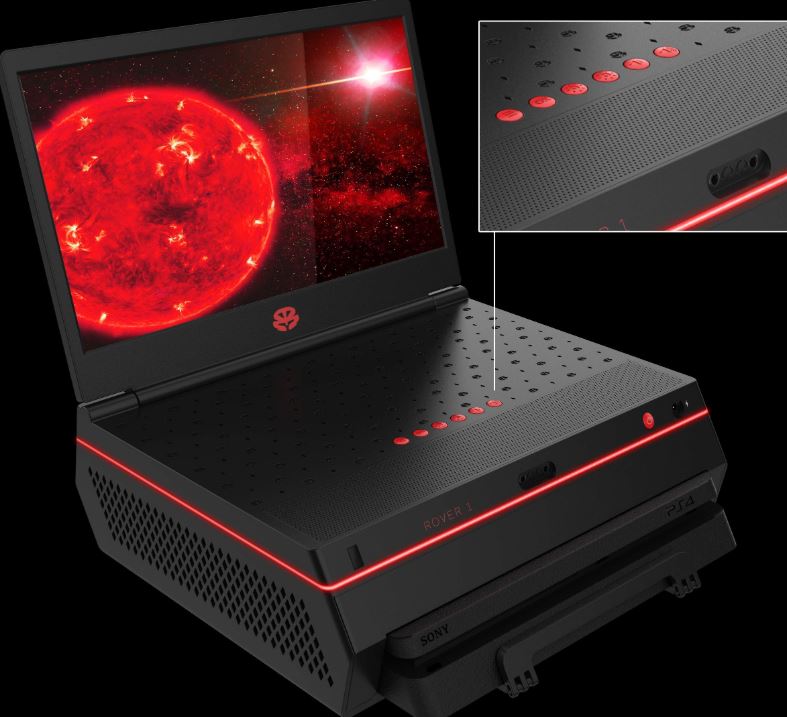 The Rover 1 Personal Gaming Station measures 4 x 12.1 x 10.5 inches. Though that’s reasonably small and compact, it’s still large enough to shove a variety of different consoles inside. More specifically, the chassis is large enough to fit an Xbox One X, PS4 Pro. And since it can also fit the larger PS4, it can naturally fit the slimmer PS4 Slim.

Rover weighs about 4.5lbs. Of course, after you’ve stuffed your console inside, that weight will basically double and run closer to 8lbs. That’s actually still pretty lightweight, and comparable to the kind of weight you’d be hauling around if you were using a gaming laptop. Placed on your lap, the weight also feels pretty much like a gaming laptop. It can get a little warm, but it doesn’t get so warm that you need to be concerned about it. Consoles are actually surprisingly good at dealing with thermal stress.

Much of the weight is the result of the Rover 1 providing shielding. Because the first thing the Rover does is provide a protective place for your console to be, making it a little more travel friendly. Since it’s a hard shell chassis, you can actually expect the Rover 1 to be able to take a couple of light beatings without having to worry too much about your console. Though you still want to be protective of the topside that houses the display.

With respect to portability, this box is clearly much easier than carrying around a console independently. Additionally, it may be worth pointing out that the size and dimensions of this gaming station allow it to be a TSA approved device, which really helps make it more of a universally supported gaming chassis. 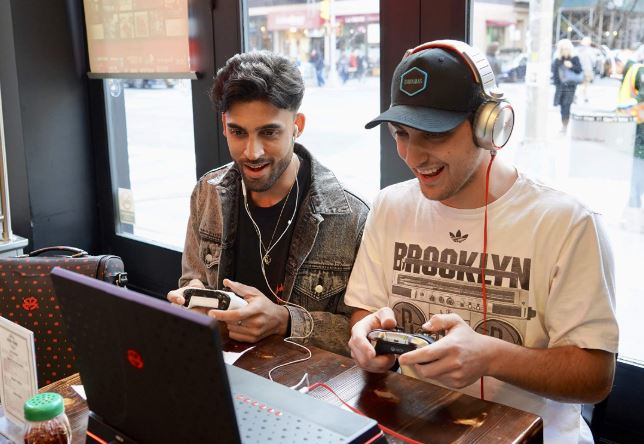 Apart from providing protection, the display is actually the second big thing that the Rover 1 is supposed to deliver. Because it’s what lets you actually transform your gaming console into something a little bit more special. Though if you’ve been keeping a close watch on the portable display market, you’ve probably noticed it’s pretty much exploded over the past two years.

In this case, you’ll find the display is a 13.3” FHD 1080p screen. Since it’s around 13”, the 1080p actually has a pixel density that looks far greater than you might otherwise expect. It’s great for clarity. But it does mean you typically want to be within three feet of the screen while playing for the best view. In fact, if possible, you’ll get the best view with the box right on your lap.

Another thing this display does right is with respect to refresh rates. More specifically,
60Hz support is present. Those refresh rates aren’t going to appeal much to a PC gamer, but they’re certainly well suited for the console gaming that this station is intended to support. Basically all console games are played around 60fps, especially if you’re playing on a television. 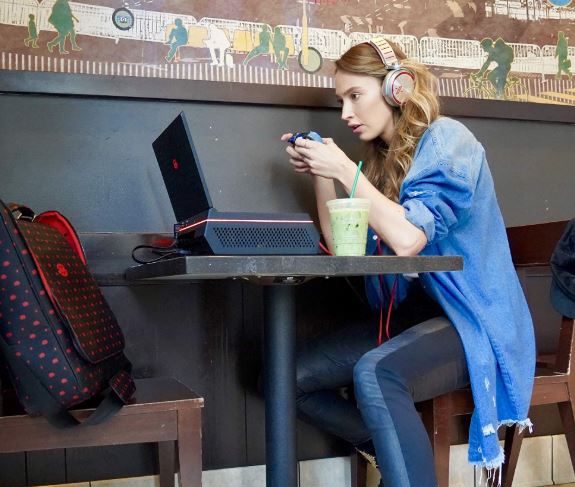 And then there’s the finish they’ve used on the display itself. Rather than using a glossy screen, the Tek Luxury Gaming Rover was made with an anti-glare finish. That’s definitely the right way to go for a screen that’s supposed to see portable use because you have no guarantees about the lighting conditions of wherever you end up playing. The glossy would’ve been alienating for a lot of people, though it would’ve definitely helped boost the colors from their current state.

Speaking of colors, the panel used inside the Rover 1 is a pretty basic TN panel. These panels used to be pretty standard for gaming, but over the past two or three years, IPS panels have really started to take market share away from TN panels. That’s because their comparative advantages have gotten much weaker as other technologies have improved.

Still, you’ll find lots of less-expensive or portable-oriented panels are constructed with a TN panel, so it’s not surprising to see one inside the Rover 1. And if you’re looking to find a portable gaming station that’s made to help save you a couple of bucks, this is really the only way to go. If you threw some kind of IPS panel onto a box like this, you could very nearly double the price of the station. 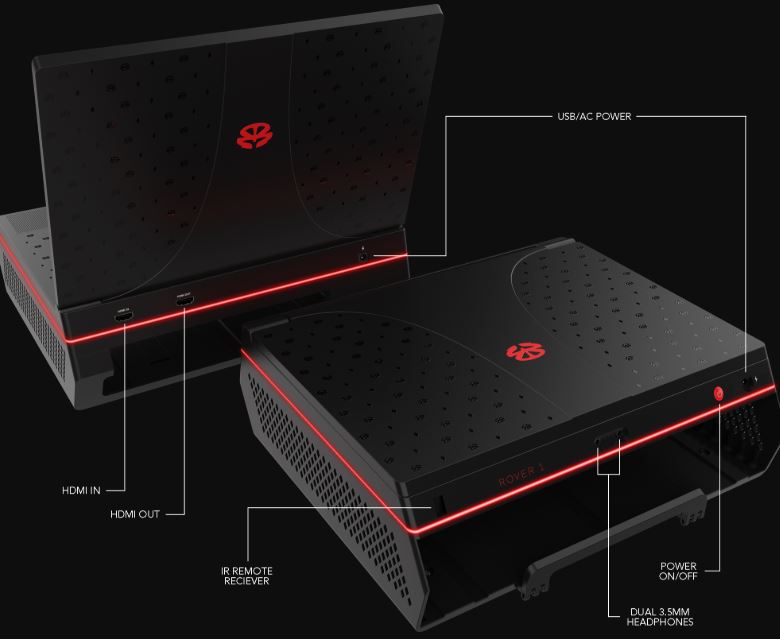 Every display constructed to draw power from USB will run into the same problem. You probably don’t think about how much power is used by a computer monitor. But in order to get the brightness and vivacity we’re all used to by now, you need more juice than you can draw from a typical USB. The display here isn’t exactly high-powered, so the 1:1000 contrast ratio isn’t about to knock your socks off if you try and watch a movie on this screen. But it certainly comes through when it comes to clarity, which is really what matters the most.

If you do end up in an environment with a larger screen, it’s possible to use the onboard HDMI-in port and an HDMI-out port, and then pass content to an external monitor or television. That kind of expandability and flexibility really helps make the Rover 1 a lot more versatile.

With respect to the onboard speakers, you should find this gaming station sounds pretty much like any other portable television-like device on the market. Perhaps the best comparison to make would be a laptop. You’re not going to be overwhelmed with the sound performance. But there are some high points.

The 3-watt dynamic speakers inside the chassis are actually powered pretty similarly to PC monitor speakers. Except the slightly larger size of this chassis allows you to get a little bit more done with the sound design. More specifically, the Buddah Tek Rover 1 uses a cylindrical design around the audio drivers to help develop greater bass tones. 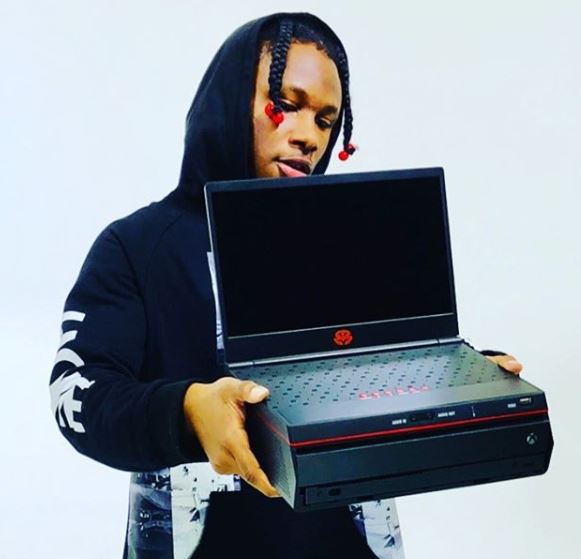 Of course, you don’t actually have to rely on the speakers if you don’t want to. Alternatively, you can connect with a pair of 3.5mm headphone jacks for audio connections. That is probably the preferential option for people who are interested in playing some kind of multiplayer game, or people who don’t want to disturb others around them while playing their games.

Mostly, this gaming station is reliant on hard wired connections. The chassis itself draws power through USB, or alternatively, through the included 15V DC power plug. However, one exception is with the audio connectivity, which can actually be done through Bluetooth 4.2. That allows you to run your own audio source through speakers while enjoying a game or movie.

The Buddah Tek Luxury Gaming Rover includes a dual USB to 15V power cable, a 4” HDMI cable, and a 12V DC wall power supply. In terms of longevity, it’s hard to predict how long the Buddah Tek Gaming Station is really expected to last. It also partially depends on how well you take care of it. That’s because the display is actually a little fragile, not totally unlike carrying around a laptop.

But as long as you don’t go throwing this gaming station off of a building, you can probably anticipate it will outlast the consoles you’ve placed inside of it. Though there are no guarantees that future generations of consoles will be sized to fit inside, that possibility is always open, which is actually pretty cool. 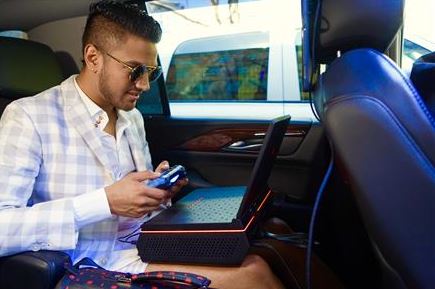 If you’re a console gamer and you’re always finding yourself on the road or traveling, then you can probably make good use of the Buddah Tek Rover 1. It does a lot of things that similar gaming stations won’t do, like support for full 60Hz refresh rates.

The Buddah Tek Luxury Gaming Rover 1 probably won’t be right for someone who doesn’t travel that often. But for travelers, this is a pretty protective and lightweight design that just might be worth checking out.