Sometimes picking between projectors is tough because they have disparate types of features. Sometimes they’ll even use different presentation technologies all together. But much of the time, it’s far more straightforward than that. Especially when you’re comparing two projectors around the same price range.

For instance, when you’re comparing the Poyank TP-01 and the Jinhoo WiFi projector, you’re basically looking at two machines that are trying to do the same thing. It’s close to an apples to apples comparison, so even minor differences between one or the other could really give an advantage to one side.

The Poyank TP-01 is actually a tad small for a projector. It’s not quite small enough to really be considered a mini-projector. But then again, there are projectors out there which are larger than the TP-01 and still consider themselves to be mini units. In this case, you’ll find the TP-01 measures 10.5 x 9.2 x 4.7 inches and weighs around 3.5lbs. 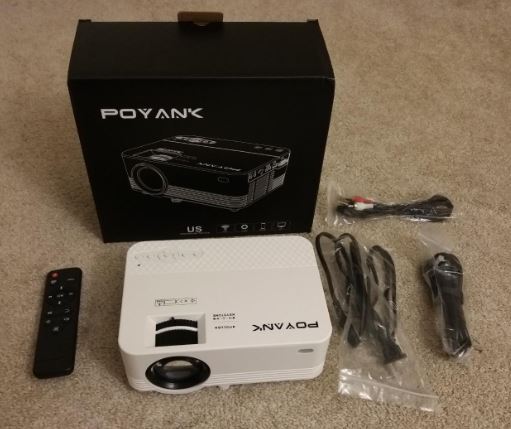 The white chassis looks like almost every other projector on the market, with a couple of small exceptions. Most notably, they’ve positioned the AV inputs on the side of the projector instead of the back. This configuration is actually far more common in certain regions of the world, like China. Among the inputs, you’ll find a VGA connection, HDMI connection, SD port, headphone and AV cable ports, and a USB port to help round things out.

Since there’s a USB port, you can use Chromecast, Fire TV, or a similar streaming service along with the TP-01. It’s worth keeping in mind that there’s only a single USB port, however. That means if you end up using Chromecast, the USB port is basically no longer a good avenue for you to connect other data storage devices. 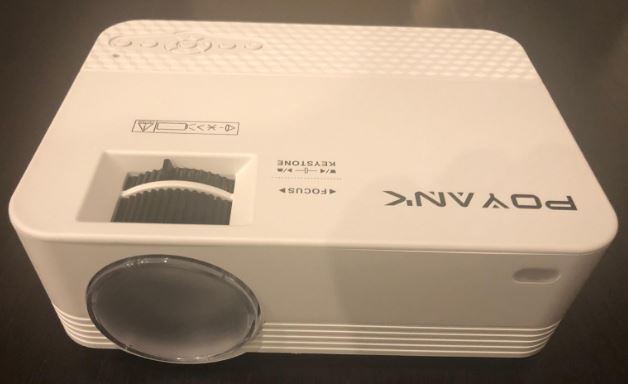 Since this isn’t totally a full-sized machine, Poyank has included a tripod to help balance everything. Additionally, they have included a large screwcap you can twist on the bottom side of the TP-01 to help adjust the angle of your projection. At maximum extension, you can change the pitch of your projection by around 15-degrees.

Using the tripod is usually a better idea when the surface you’re placing the projector on might be vulnerable to shaking when touched. Being able to raise your presentation several inches off the table can also be quite useful for finding the right angles. 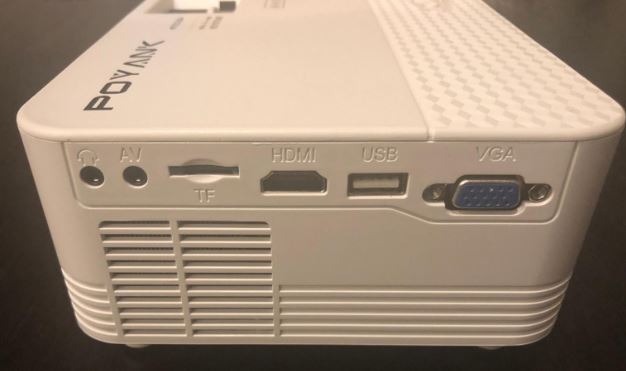 When you’re shopping for entry-level projectors, you pretty much have to resign yourself to the fact you’re going to end up viewing 480p. Because 720p projectors are still pretty pricy, and 1080p projectors basically require you to double your budget. So in this case, you’re looking at a native 800×480 resolution. That’s pretty much the kind of clarity that you used to get from old broadcast TV. Naturally, you can run 1080p content on a projector like this, but it will be downscaled to 480p. 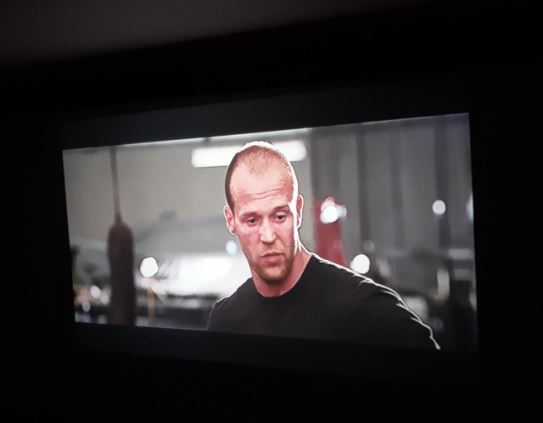 Of course, once you start stretching the screen out to larger sizes, the pixel-density of the image will start to shrink lower than 480p. By the time you’ve stretched out to the maximum 176” size, you’re left with a pale shade of the initially strong performance. The smaller 32” screen size actually looks fantastic, and performance remains pretty steady out towards the 100” mark. But going well beyond that and you’ll encounter some issues with vivacity. Especially in environments where you don’t have total control of your lighting conditions.

Because this is only a 2800 lumen projector. Compared to a number of entry-level units, that’s still pretty bright. But it’s also about half as bright as the next projector up the food-chain, so you still have some common sense limits in place here. You’re still going to want to use the TP-01 while inside darker room conditions, and with minimal ambient lighting. 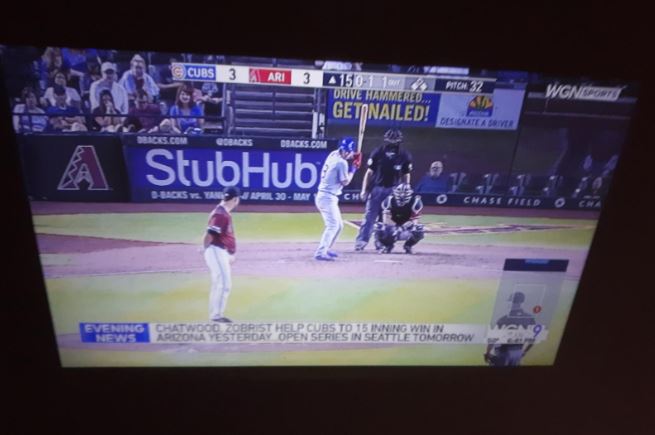 Since the brightness is only a tad above average, the contrast ratio is actually a tad surprising, running at a wide 2000:1 ratio. That’s basically doubling the capacity of similar entry level projectors. Though again, that contrast ratio won’t hold up as well if you end up trying to take your projection out towards supermassive screen sizes.

In any case, the TP-01 uses a standard 16:9 aspect ratio, so you don’t get those black bars around your screen while watching content with a standard format. Though this projector probably isn’t a great choice for business presentations due to its lack of clarity in large screen sizes, it’s otherwise got plenty of strengths.

The Jinhoo WiFi Projector measures 9.7 x 9.4 x 4.5 inches and weighs around 3.1 lbs. That’s just a tad smaller and lighter than the TP-01, but they’re otherwise quite close in size and weight. And aesthetically speaking, the Jinhoo WiFi Projector is quite similar to the TP-01. It even uses the same side-positioning for the AV ports. And those ports are an identical laying, including USB, VGA, HDMI, SD card, and two spaces for audio. 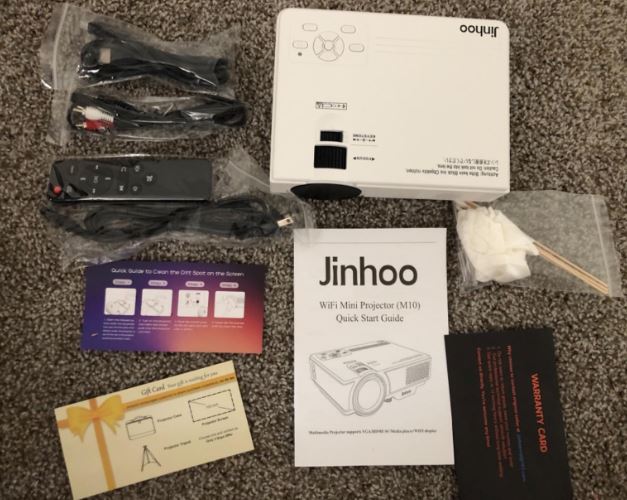 Another thing that’s virtually identical is the user interface. The topside allows you to navigate through menus with simple arrow keys and well-labeled icons. It’s actually tough to tell these projectors apart at times. But for some reason, Jinhoo printed a bunch of safety information atop their projector, which actually is probably the only big visual distinction between them.

Usually, this kind of safety information would be placed on the bottom somewhere, or hidden away on a sticker. It’s not that unsightly, and since you don’t end up looking at the projector itself all that often, it shouldn’t be a bother. It’s just a little strange.

The native resolution is 840×480, matching the 480p presentation of the TP-01. You can also play 720p or 1080p content, but it will of course be downscaled to the supported 480p screen. In other words, both projectors are visually equipped to do basically the same thing. But not exactly the same thing. 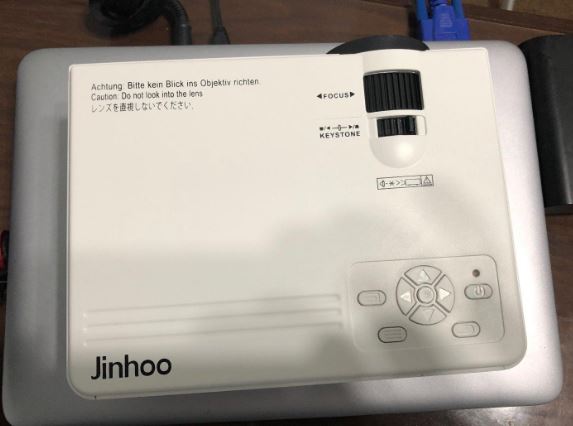 Because the Jinhoo WiFi projector has a peak brightness of 2400 lumens. If you’ve been keeping track, then you’ll know that’s a few hundred points lower than the TP-01. Of course, in most circumstances, that difference won’t matter. It’s something that’s perceptible, but only faintly. Though it does give a slight edge to the TP-01 for people who are struggling with controlling lighting conditions.

The similarity between their brightness is even clearer witnessed in the 2000:1 contrast ratio. If nothing else, that should make it clear this projector looks quite similar to the TP-01 in a side by side comparison. Likewise, you can move between 32” and 176” screen sizes, which matches nicely with the capabilities of the TP-01. However, since you’re working with less overall brightness than the TP-01, those larger screen sizes are going to be even more difficult to get to perform well. 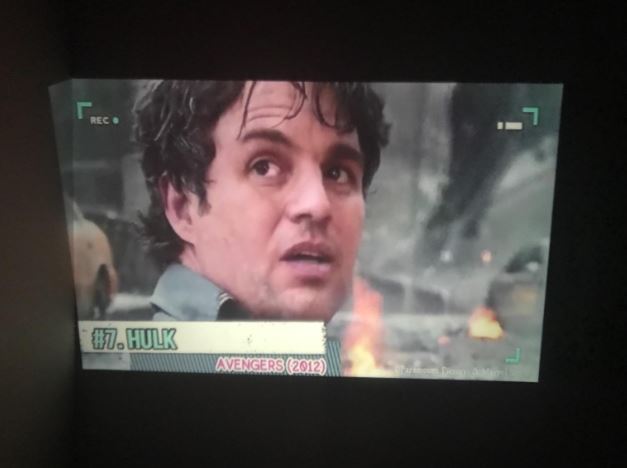 Onboard you’ll find a pair of 2W audio speakers. Since there are two speakers, the result as at least stereo sound. But if you’re looking for something more than the bare minimum with your audio experience, then you’ll definitely want to pair this projector up with some kind of aftermarket speaker or soundbar. It all depends on whether you’re looking for something more portable, how much space you need to fill with the sound, and so forth.

You can tell right from its name that this equipment is going to have Wi-Fi connectivity. In this case, you’ll find the app connectivity is pretty important competent as well. Since the developers were clearly Chinese, there’s a small amount of non-grammatical English. But it’s nothing that gets in the way of navigating through the menus and otherwise setting up your display. 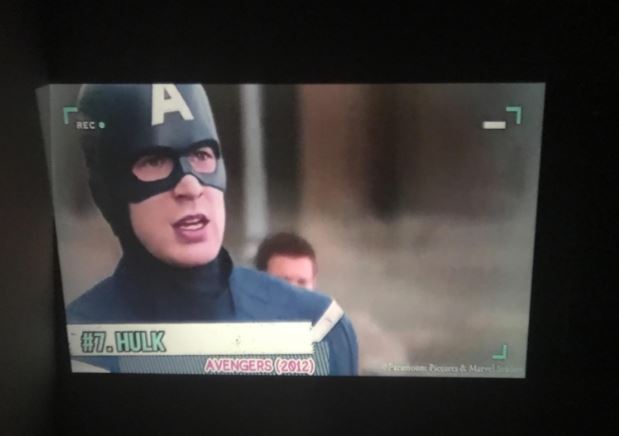 As with the TP-01, the bulb is supposed to last 50,000 hours. Reaching the 50k mark is increasingly common these days. And with a bulb that’s hardly cracking 2600 lumens, that’s not exactly a huge milestone. So you can’t give this projector extra credit for longevity, but it’s nice to know that you won’t have to worry about the bulb for literal decades. Though the Jinhoo WiFi doesn’t have support for decades, it does include a three-year warranty.

POYANK TP-01 vs. Jinhoo WiFi Projector Review – Which One Is Better?

In a side by side comparison, these two projectors have an enormous amount in common. They’re both about equal with respect to their portability, range of adjustment, and installation options. Both make good use if Wi-Fi to make it easier to connect your stuff to the projector, and both are capable of the same range when it comes to screen sizes. Sharing only those things in common, you could already just about flip a coin and end up with a good unit.

But when it comes to audio, there’s another tie. Both are using the same type of 2W onboard speakers, and both use two audio drivers for stereo sound. They even have identical support for extending your audio out towards headphones or speakers.

There are some significant differences between these units, but you do have to strain to look for them. Notably, the TP-01 is marginally less bright, making it less favorable for people who are trying to reach the 176” maximum size. If you’re mostly sticking to a smaller 70” display, you probably couldn’t tell the difference between these two projectors played side by side. However, if have poor control over your lighting conditions, or you aspire to reach those super large screen sizes, then you’re slightly better off with the Poyank TP-01.

It’s got more power at a very similar price, which really makes it a better all-around choice and a clear winner for someone who’s trying to pick up a more portable projector around this price range. But again, the Jinhoo WiFi Projector is only marginally worse than the TP-01, so you could honestly flip a coin to pick, and you’d probably be happy with what you get.