A directional microphone for your DSLR camera can provide many advantages, from hearing clearer, more defined recordings of the human voice, to increasing the overall audio quality of recordings. One of the major issues that such microphones must overcome first and foremost, is the way that it attaches to your camera.

In order to use a directional microphone like the new Canon DM-E1, no matter how well it performs, there must not only be a connection method available, either directly or via a hot shoe adapter, but it must also complement the hardware. Additionally, it needs to be easy to use and adjust, providing a desirable amount of versatility.

Overall performance is nonetheless a critical part of what makes a camera’s directional microphone valuable, and part of this quality is how well the battery operates, and how durable it is over long term, continuous use. 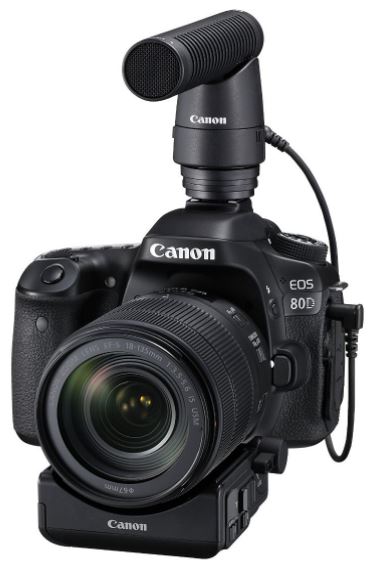 In this review you’ll find a complete breakdown of the Canon DM-E1‘s qualities, some of which not already mentioned being economy and appearance. We’ll go over its most impressive and essential features and give you some added insight to each one.

As you know, it’s important that a directional microphone will work with the camera that you’re using. The issue of compatibility is something that’s not unique to Canon or any other brand, as manufacturers not only want to make products that are viable with one another, but are specially designed to blend seamlessly and comprehensively.

Considering this, the DM-E1 does very well in having two basic denominators in being compatible with Canon EOS series DSLR cameras. First, they must have a movie option in order to actually use the microphone technology, and secondly must have a microphone input jack. All Canon EOS series cameras have the former component, but not all have the latter, leaving some question to how well it will work for you, however most high and low-end DSLR cameras from Canon have this feature.

Looking into its design further, it measures 3.8 by 5.3 by 3.2 inches in size and only weighs 9.6 ounces, making it an exceptional candidate for even the compact Canon EOS M series. 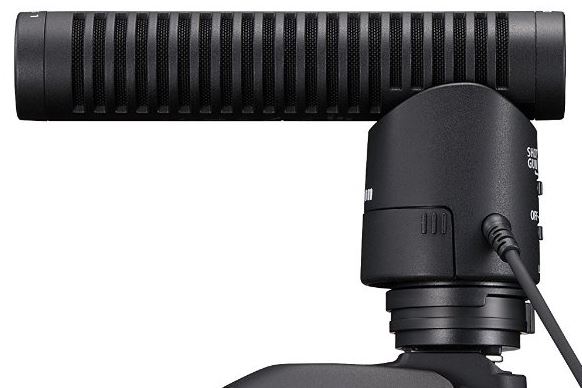 When you’re recording video and would like to record audio as well, it’s not always as simple as point and shoot. One of the dynamics of recording sound, just like video, is positioning and angles. This is what makes multi-directional or versatile microphones like the DM-E1 valuable, in terms of getting your ideal shot.

The first mode we’re going to cover is called shotgun mode, which may sound counter-intuitive if you’re unfamiliar with the terminology. It’s particularly valuable for capturing exceptionally clear audio with a fine band directly in front of the camera. Being useful for picking up the sound of a human voice or musical instrument, it blocks out environmental noise beyond this area and focuses on a particular subject. It’s also capable of picking up desired subtle sounds.

The next two modes are recorded in stereo with the difference between them being the angle of sound pickup.

With the 90 degree option you’re capable of capturing the sounds of a particular concentrated subject or group, as well as some background noise so that if there are multiple people talking for example, you’ll be able to hear all of their voices.

The 120 degree stereo setting is designed for picking up sound from a wide area in front of the camera, meanwhile blocking out additional noise from behind or directly beside the camera. 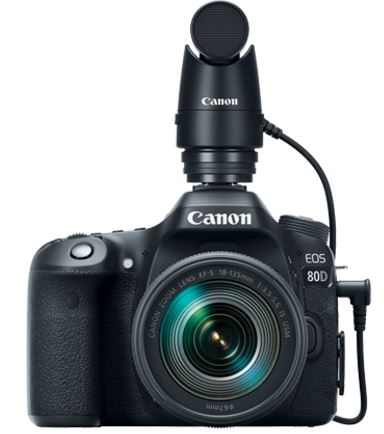 Wide Frequency Range and Ease of Use

We mentioned overall performance of a higher quality camera, and there are several points to be made that go beyond versatility. One of the most important features of any microphone for a musician, or someone who wishes to capture detailed sound with as much clarity and volume as possible, is the frequency range associated with it.

What this means is being able to pick up low frequencies like those found when recording a bass guitar or the low frequencies of a symphony. Also, medium and high frequencies such as normal sound and the light chirp of a distant bird.

The DM-E1 is capable of reproducing sounds of between 50 hertz and 16 kilohertz which is low enough to pick up deep bass notes and ambient sounds from the natural environment. It provides the same maximum frequency range as is capable on YouTube. 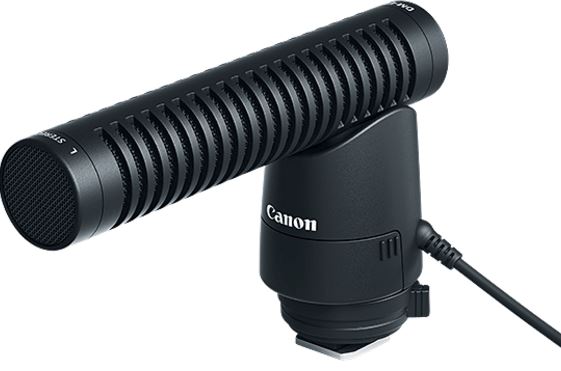 Ease of Use Features

One of the features that users will find easy to use is the existence of a built in battery component, which we’ll review in the next section. Another simple aspect is the mechanism used to switch between the audio recording modes. It’s located right on the back of the microphone facing the user, with the three modes presented in an easy to view way. It’s the first manual setting with the shot gun and stereo modes clearly labeled, so that you simply switch between the three and you know which one you’re using.

Built in Battery with Power Options

The battery itself has some useful functions, including a power switch located directly below the pickup angle options. Included are three power modes, which are simply on, off and auto, the last of which allows you to turn the microphone on and off automatically when connected to your camera, depending on your camera’s power setting.

Looking at the battery itself, its beneficial just having one considering the performance of this microphone. You don’t have the resultant power consumption limitations of relying entirely on your camera’s battery.

It’s a lithium button cell battery, and because of the automatic powering feature and independent power source, the microphone is capable of running for longer periods of time on a single cell. There’s also an energy indicator located above the power switch on the back of the microphone. It uses a light source so that you can know its status, and whether or not you’ll have enough battery life for your next shot. 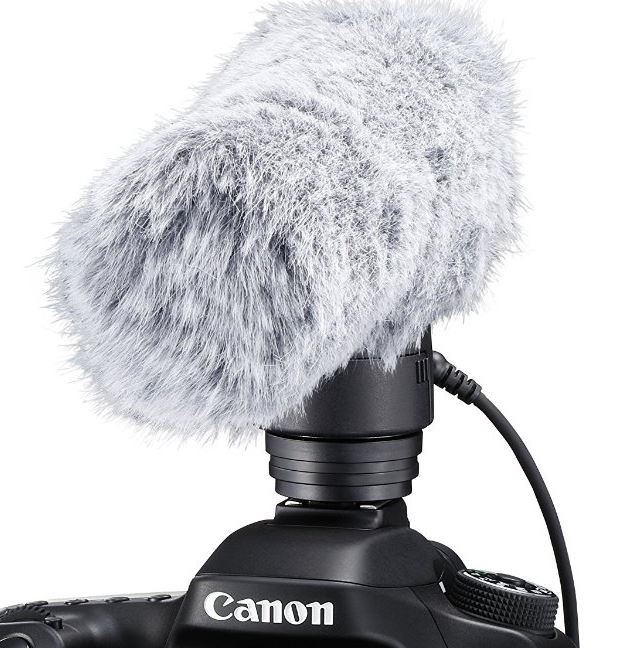 Going back to the performance potential of a specifically designed and compatible directional microphone, the shock mount system contributes a significant amount of quality. Because modern camera technology, including high end processors, CMOS sensors and advanced lenses can vibrate and produce noise. Much of it is picked up by the microphone and can cause audio disturbance.

The resultant vibration of the microphone chassis mounted to the camera can also produce a significant amount of noise as well, which is why a shock mount construction is valuable. What the shock mount construction on the DM-E1 does is suppresses all of these sources of vibration and limits unwanted noise by fitting properly with a wide variety of compatible digital cameras. Also providing an elastic connection.

Some noise cannot be avoided in this way, which is a major oversight for many directional microphone manufacturers, especially since many users don’t require advanced telephoto lenses or noisy processors and sensors that operate in low light settings.

If you’ve ever taken an outdoor shot in the presence of wind, or breathed directly into a microphone, you know how loud, disruptive and difficult to avoid it can be. Because this type of noise is so loud and present, it also limits a microphone’s ability to focus effectively on its subject, thus lowering its performance even further and potentially ruining an otherwise perfect shot.

For these reasons, Canon has included a thick wind screen that fits over the DM-E1. It’s capable of both picking up subtle audio clearly, and also block out much of the effects of wind. 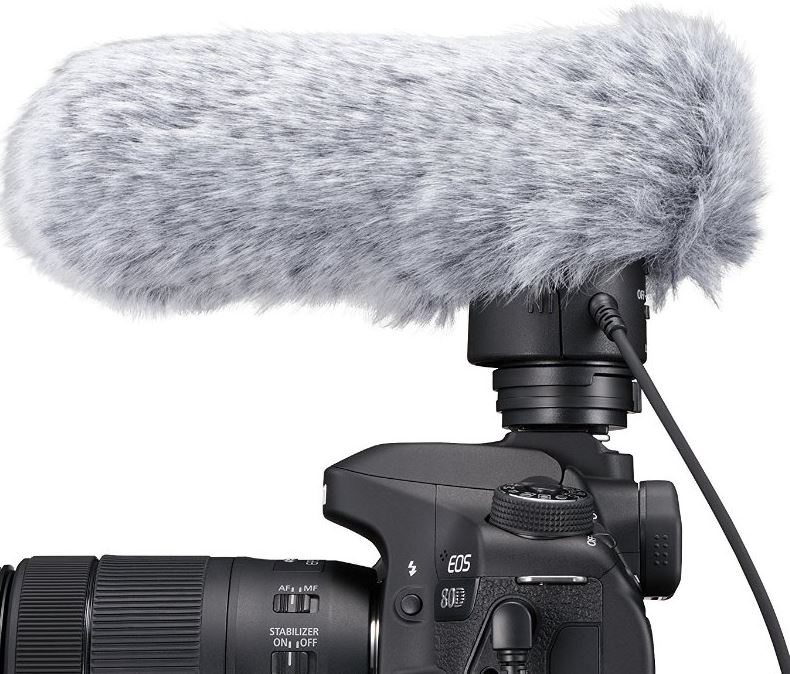 The DM-E1 is designed to be compact and effective, even when the wind screen is being used, which helps provide quality in ease of use and appearance. On the other hand, it comes at a high price than other microphones with the same basic audio recording capabilities, which is justified by its compatibility with many different camera models, however limited the choice may be.

The existence of a built in replaceable battery provides durability value in that it’s easy and cost effective to replace, and keeping your camera from overexerting itself.

The Canon DM-E1 Directional Microphone provides an opportunity to take advantage of a higher quality microphone in a variety of situations, with enough ease of use for a total novice to understand and begin using it. If you’re using a compatible EOS digital camera with a microphone jack and want to record intimate interviews as well as live concerts, it will work well for you, however it will come at a considerable price.

Overall, it seems to be built well and provide plenty of performance upgrades for those needing fantastic audio clarity for all of their professional recordings.