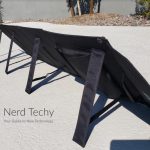 Not too long ago, it was considered normal to go off the grid for a week every now and then. It’s called “taking a vacation,” and in the days before smartphones, it meant you weren’t taking calls. But with the ubiquitous availability of smartphones, many of us are expected to be reachable 24/7. This means that even when you’re in the wilderness, you’re going to need a cell phone charge. Not only that, but keeping your phone charged is a good idea for safety, as well. If you get lost or injured, you want to be able to call for help.

One obvious way to make sure you have a good charge is to carry a power bank. This is great for shorter trips. But power banks, by their very nature, have a limited capacity. If you need enough power for a long trip, this can mean carrying an impractically large power bank. In this situation, a solar panel charger is a good alternative. There’s no battery in this kind of system, but none is required. After all, there’s no limit to how much energy you can get from the sun.

Of course, not all solar panel chargers are the same. Some are bigger, some are smaller. Some produce higher wattages, others produce lower wattages. Similarly, not all are equally well-engineered. If you want to get good quality, it’s a good idea to stick with a manufacturer that has a track record. CHOETECH is well-known for producing a variety of charging equipment, such as USB chargers. Now, we’re going to look at the CHOETECH 80w Portable Solar Panel Charger. We’ll take a look at the design and materials, the wattage produced, and what types of device you can charge. We’ll also look at the CHOETECH charger’s safety features. After all that, we’ll be able to render our verdict. 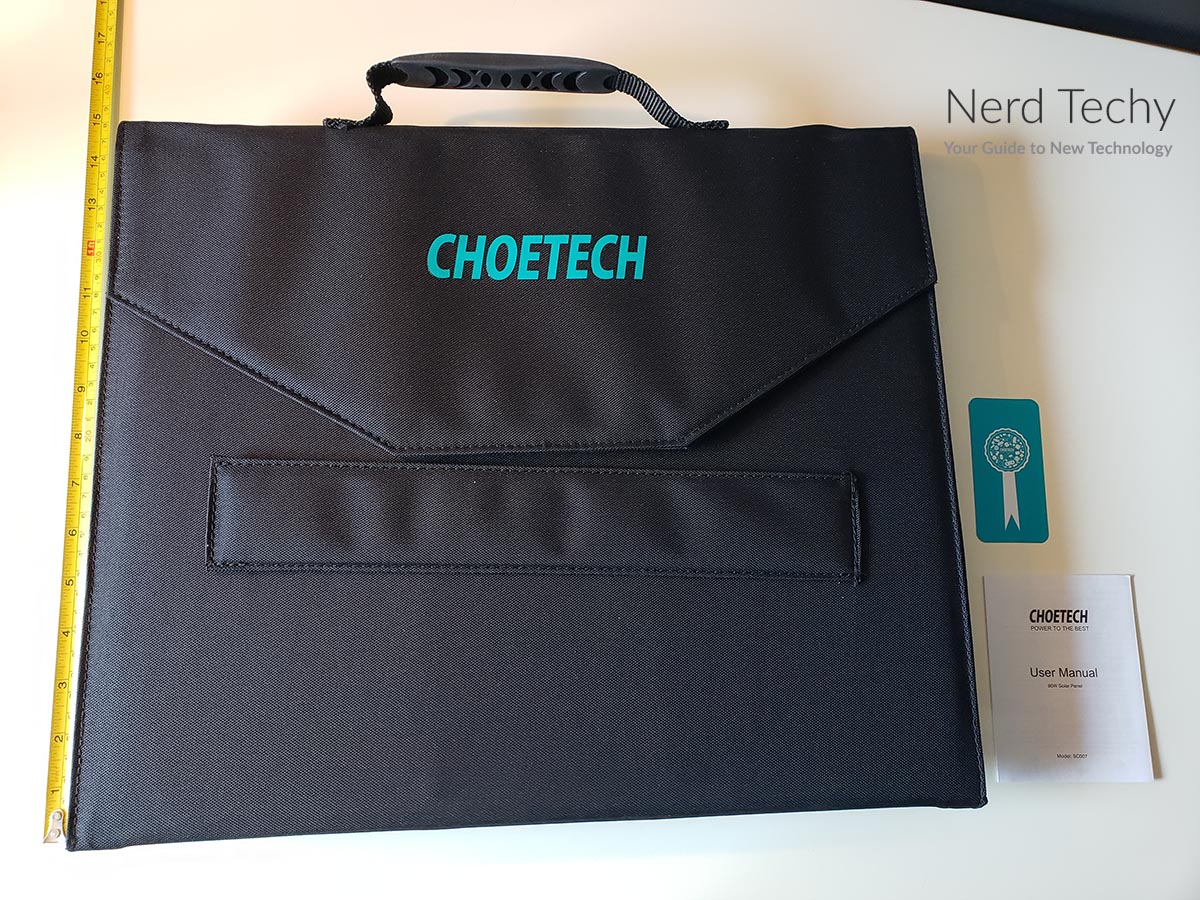 CHOETECH 80w Portable Solar Panel Charger is a collapsible solar panel that’s designed for easy transport. When collapsed, it measures just 14 inches tall, 16 inches wide, and an inch thick. This makes it similar in size to many collapsible camp chairs. While we’re comparing it to chairs, think of a metal-framed chair in terms of weight. The CHOETECH charger weighs in at 8.73 pounds, which is a bit hefty for a long hike or backpacking trip. It’s better for short day trips, or for state campgrounds where you can walk from your car to your tent. For those short carries, it’s very well-engineered. There’s even a convenient carry handle on top, with an ergonomic nylon handle. 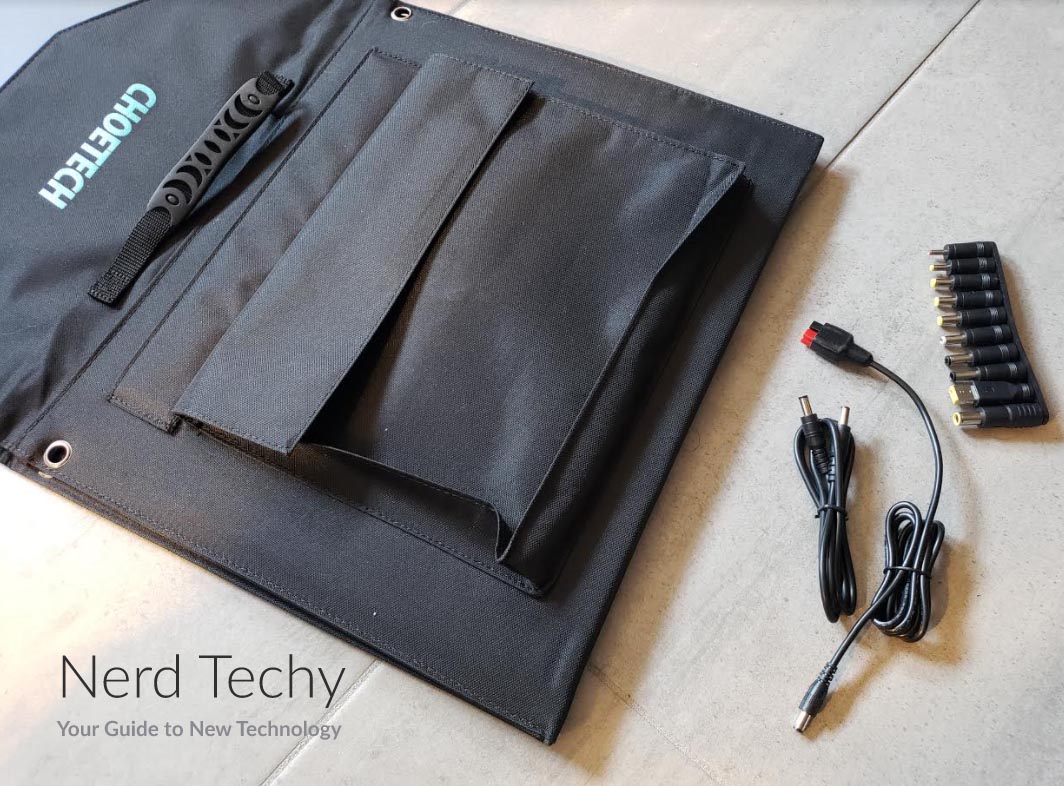 The charger is black in color, and has a slick outer shell that wicks away water. When you want to use it, simply open the velcro closure on the top, just under the handle. Next, unfold the panel. It opens to more than four times its original size, and measures more than five feet long when fully extended. By default, you would simply lay it on the ground and plug in your devices. However, there’s a set of four adjustable kickstands on the backs of the panels. They can open as wide as 45 degrees, so you can prop the solar panels up easily. This means you can get a better angle on the sun, which means faster, more efficient charging. In addition, there’s a set of six grommets around the outer edge of the panel. It can be hung from an RV awning or even from a tree branch. You can also fold it in half and carry it on the outside of a backpack for on-the-go charging. 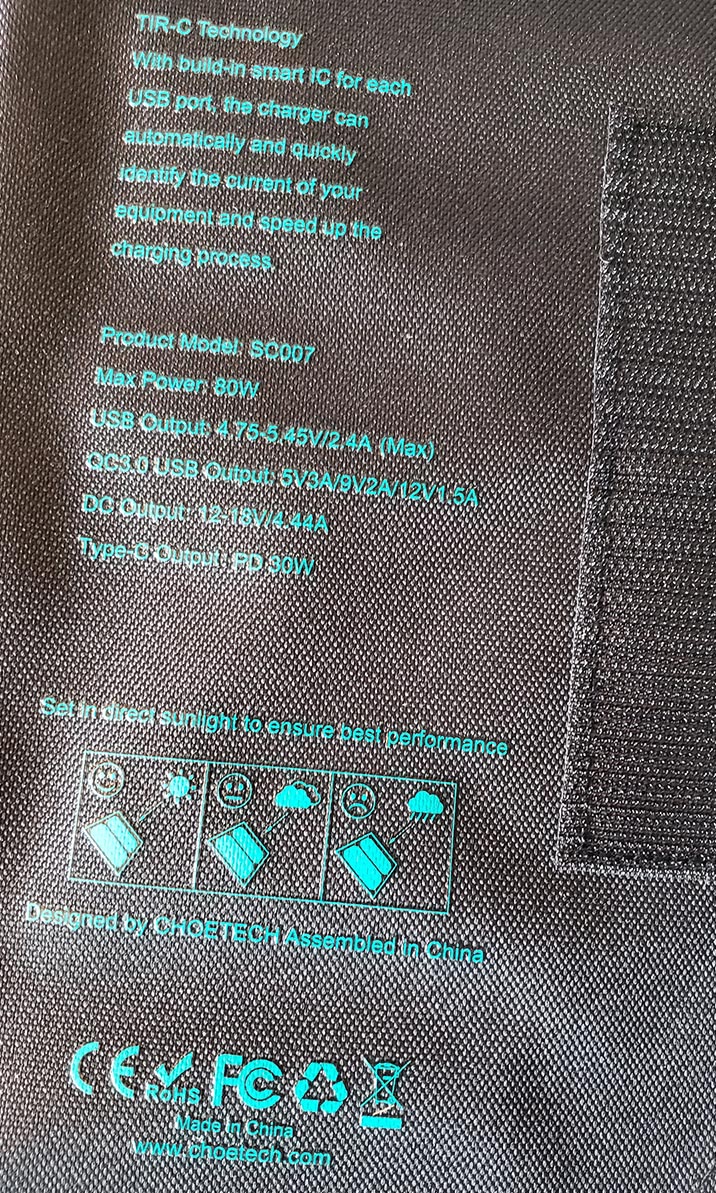 Even with all this versatility, the CHOETECH 80w charger is still somewhat bulky. If you need a smaller, more portable solar panel, consider the CHOETECH 24w Portable Solar Charger. It has a compact design that’s perfect for hiking and backpacking. However, as its name implies, it only provides 24 watts of power. 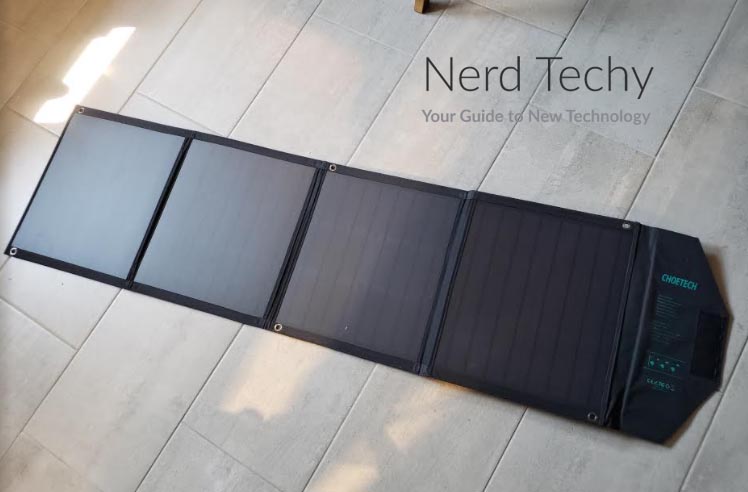 The surface of the solar panels is constructed from durable PET plastic. PET is one of the preferred materials for solar panel construction, since it allows for very high efficiency. It can also withstand high temperatures, and because it’s plastic, there’s nothing in the system that can rust. Even if there were, the system is IPX4-rated for water resistance, so water won’t penetrate. We should clarify that IPX4 means the panels are splash-resistant, not submersion-proof. If you drop the solar panels in a pond, they’re likely to fail. But if it starts to rain while you’re charging, they’ll be just fine when the sun starts shining again.

Your devices plug directly into power ports that are located on a small block on the back of the panel. This block is housed in a small velcro pocket. Look carefully, since it can be easy to miss if you don’t know what you’re looking for. As we noted already, there’s no battery power on the CHOETECH 80w Solar Panel Charger. As a result, the glossy ABS plastic block is really the only other hardware you need to worry about. All four ports are lined up neatly in a row and are easy to access.

The CHOETECH 80w charger is backed by a 24-month manufacturer’s warranty. As a result, you don’t have to worry about any manufacturer’s defects. If anything is wrong, it will be more than apparent during this time.

The CHOETECH 80w Portable Solar Panel Charger has a maximum power output of 80 watts. In theory, this is sufficient for charging just about anything. However, keep in mind that this rating assumes that you’re getting the maximum amount of sunlight. In practice, your performance will depend on cloud cover, as well as how direct the sunlight is. Under poor conditions, you’ll still be able to charge; it will just be slower than it would under ideal conditions. 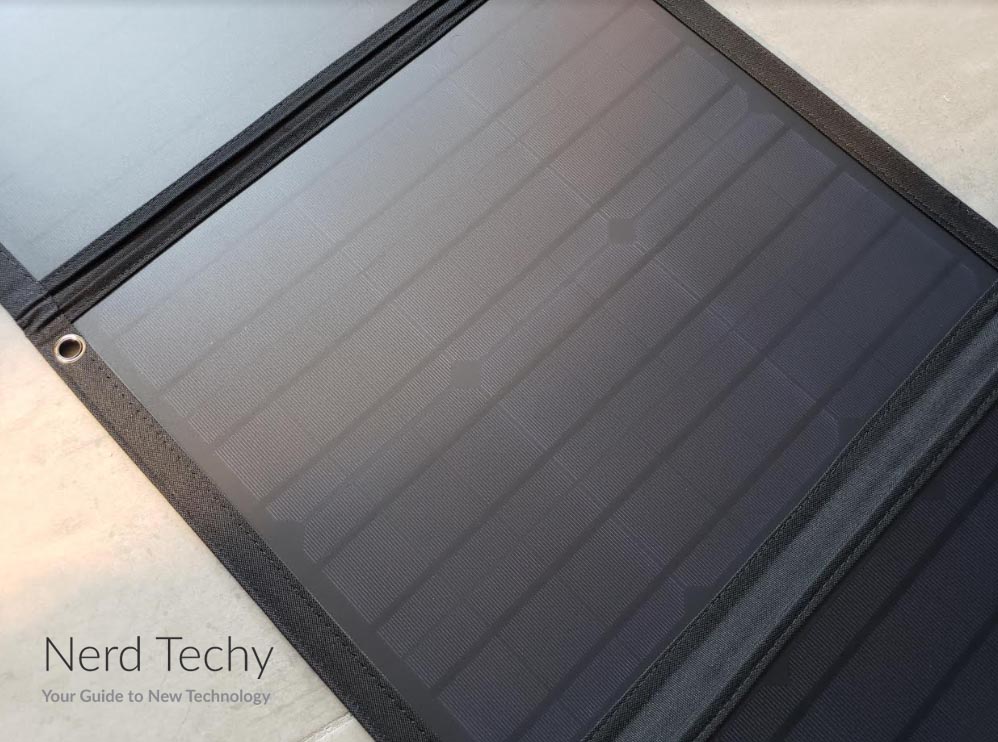 The first charging port is a simple barrel-shaped DC output port. Now, you might be thinking to yourself that this port isn’t very useful without an adapter, and you’d be right. That’s why CHOETECH includes an adapter kit in the package. In fact, there are 10 different connectors that connect to almost any DC barrel plug. This means you can use it to charge portable power banks, car batteries, and most laptops. The DC port has an output of 18 volts at 4.44 amps, or a total of 79.92 watts.

Next in line, you’ll find a USB Type-C PD charging port. This is designed for PD charging devices at a rate of up to 30 watts. To be clear, this isn’t enough to use a laptop while it’s charging. But it’s significantly faster than an ordinary USB cable, so you’ll be back in business in a few hours. On a PD-capable smartphone like newer iPhones and Samsung Galaxies, 30 watts is exceptional. You’ll be able to use your phone, even while it’s charging. This is also assuming, of course, that your solar panel is getting a reasonable amount of sun. 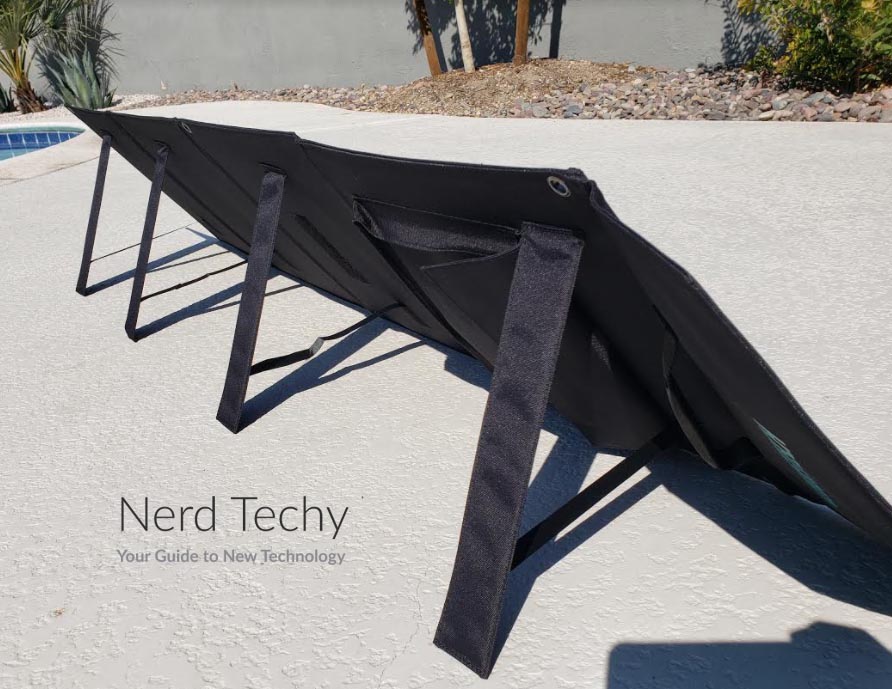 The third port is a USB Type-A QC 3.0 port. This port charges at up to 18 watts, and intelligently matches your device’s needs on QC-capable devices. Keep in mind that both PD and QC charging requires a compatible charging cable. Finally, the fourth port is a simple USB Type-A port. It charges at 12 watts, which is the maximum possible for a standard USB 3.0 port. If you’ve been paying attention so far, you’ll notice that the total wattage of the ports is nearly 140 watts. Since the maximum total system output is 80 watts, you can’t max out all your ports at once.

Needless to say, any good charger should be safe. It should not only be safe for your phone, but also for you and your supplies. Thankfully, the CHOETECH 80w Portable Solar Panel Charger has plenty of safety features to keep you protected. To begin with, it provides safe power flow, as well as overcharge protection. How exactly this works depends on which port you’re using. 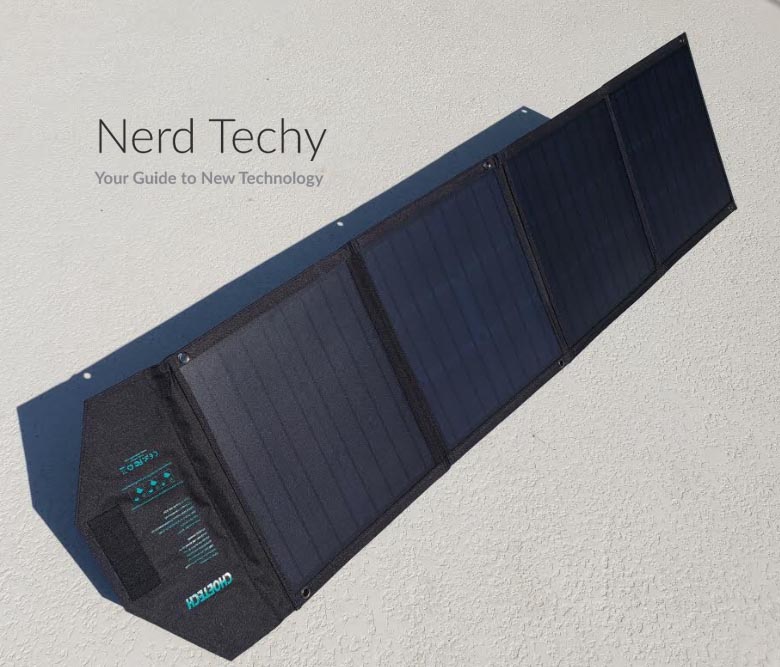 For example, the simple USB Type-A port is safe because it delivers standard wattage that works with any USB device. The PD port, on the other hand, is safe because of the intelligent PD technology that changes wattage as needed. Regardless, you don’t have to worry about your devices getting too much wattage and becoming damaged. Your devices will also be safe from overcharging. When a battery is full, the CHOETECH 80w Solar Panel will automatically cut off the flow. 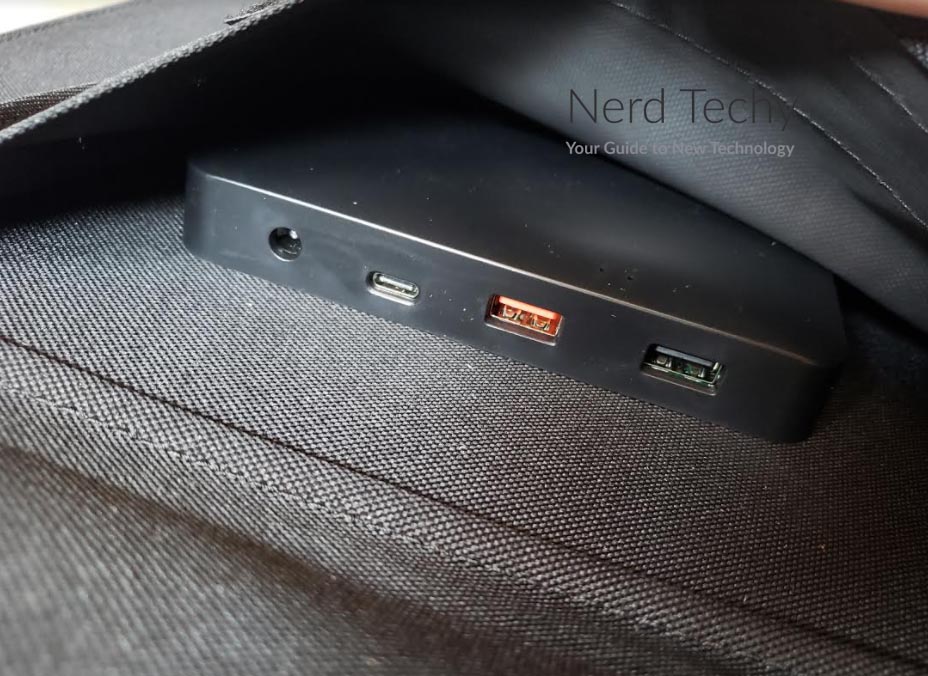 In addition, the charger provides short circuit protection. If there’s a short or a bad wire, the charger will automatically turn off rather than damaging your device. Not only that, but the CHOETECH 80w charger itself has an internal temperature sensor. If it starts to get too hot — you guessed it! — the charger will automatically turn off. This way, you don’t have to worry about it causing a fire or becoming hot enough to burn you.

On top of all of that, the CHOETECH 80w solar panel has an efficiency of between 21 and 23.5 percent. If you don’t know much about solar panels, that might sound terrible. In fact, it’s slightly better than industry average. That means you’ll get more wattage per square inch than you will from most solar panels currently available. 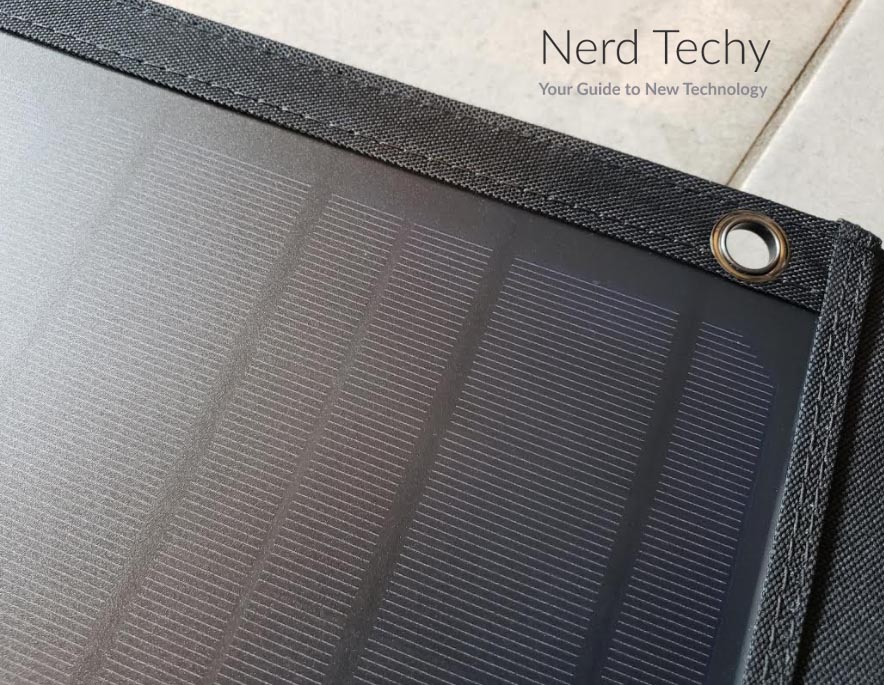 So, does the CHOETECH 80w Portable Solar Panel Charger pull its weight? In most regards, absolutely! It’s a bit bulky if you’re looking for a compact charger. But if you want plenty of power, it’s an excellent choice. You get a total of 80 watts of output, more than enough for most portable purposes.

Moreover, you get wide compatibility with almost any device. The DC output and adapter kit makes it exceptionally versatile, and a viable option for emergency backup. Finally, it’s durably constructed, and it’s safe for all your devices. In the end analysis, it’s one of the better solar chargers that we’ve seen.