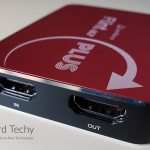 If you’re considering going into streaming, you’re not alone. More people are streaming games and videos than ever before. In part, this is because we’ve all been spending a lot more time at home lately. But it’s also a natural continuation of an already-existing trend. After all, streaming is a relatively new technology, and it’s still in its infancy. It’s only natural that it’s been a growing hobby.

But like any hobby, you’re going to need some equipment before you get started. One of the most important pieces of equipment is a capture card. A capture card takes the video from your video source and makes it useful for your PC. As a result, this is a pretty important decision. Your video quality depends in large part on how good your capture card is.

We’re about to review the ClonerAlliance Flint 4KP Plus capture card. We’ve already reviewed the original Flint 4KP, but the newer version has gotten a couple of upgrades. We were already happy with the original, but the newer version’s upgrades are mostly in the design. The ports are more clearly labeled, and the case has a more attractive profile. So, does that mean it’s worth buying for a few dollars more than the original? We’re going to take a close look, and tell you everything we’ve learned. Let’s get started! 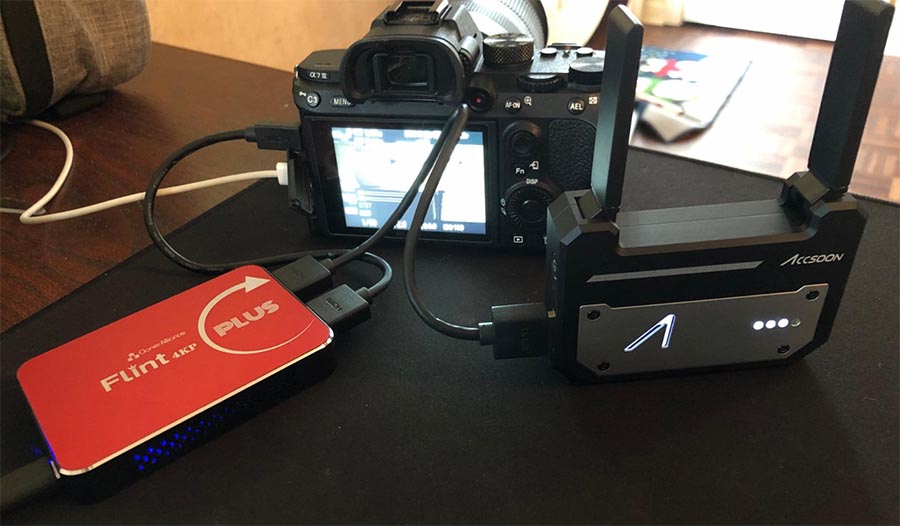 What is a Capture Card and Why do I Need One?

Before we talk about the Flint 4KP Plus, it’s important to understand just what we’re dealing with here. What does a capture card actually do, and why is it important to use one? This relates to how your computer works when you’re streaming or recording. When your computer or console plays a game, the GPU needs to render the raw game data into a usable video signal. This signal can then be displayed on a monitor, TV, or any other kind of display. Conversely, the GPU also needs to encode that rendered video back into an ordinary video file.

As you can imagine, this can push your GPU beyond its capacity, especially if you’re playing a newer game. The result will be a laggy stream, choppy stream quality, or even a game crash. The solution is to use two different systems. For PC gaming, this means using one machine for playing your game, and another machine for encoding your video. But how do you get the raw signal from one computer to the other, while still displaying it as you play? The solution is to use a video capture card. The same principle applies when you’re streaming a console game. The capture card transmits a raw signal to your computer, while simultaneously sending the image to your display. Capture cards can even be used for cameras, particularly high-end cameras with HDMI outputs.

There’s a popular myth that capture cards capture the video and encode it, reducing your GPU load. This is not the case. The capture card simply transmits the signal. Note that there are some high-end capture cards that do encoding, but even then, most of them are low quality. You’ll get better performance even from a PC with a midrange GPU. There’s another myth that capture cards reduce the load on your CPU. They do not. The CPU is used for entirely different functions, and does not have a role in rendering video. 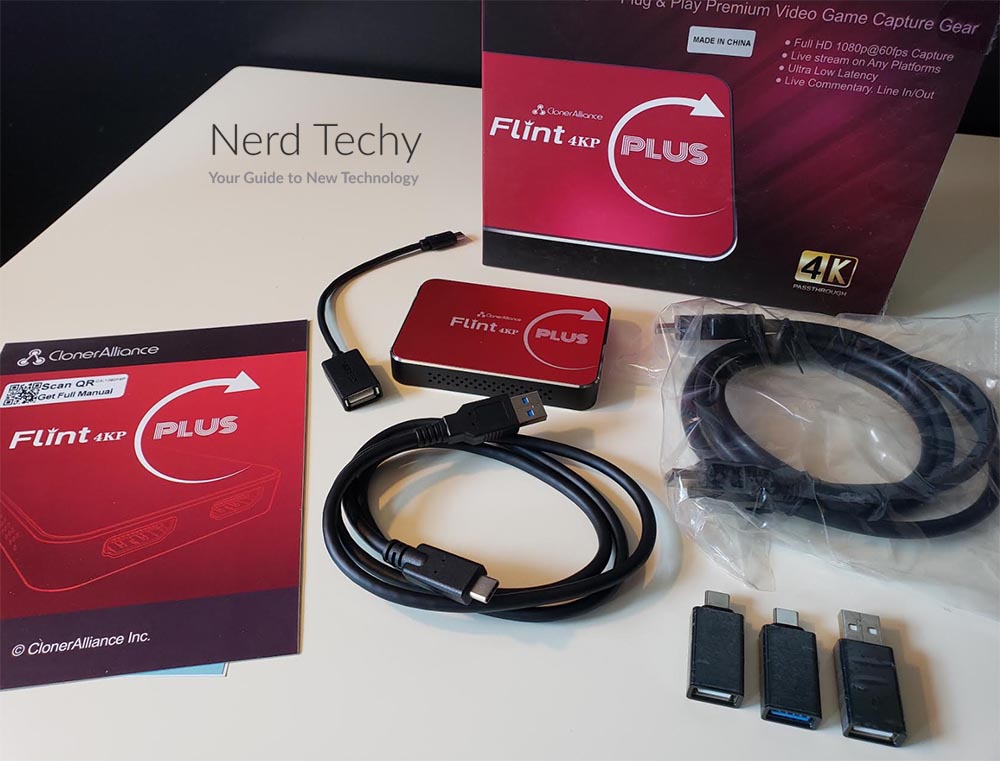 When we reviewed the original Flint 4KP, we liked most of its features. However, the overall design, look, and configuration left us underwhelmed. Apparently, we weren’t alone, because ClonerAlliance has significantly overhauled the 4KP Plus’ design. Instead of the squarish, matte appearance of the old version, the new version has a slick rectangular design. The top plate is a satin red, with a white Flint 4KP logo emblazoned on it. The sides of the unit are black, similar to the original. However, they have a smoother look, with a slight outward bulge.

The overall size of the Flint 4KP Plus is 3.54 inches long, 2.48 inches wide, and 0.59 inches thick. If you’ve only seen the marketing pictures, you’ll be surprised at how small it is in your hand. It’s also lightweight, at only 0.53 pounds. This makes placement easy, even if you’re packing two full-sized PCs into your desk. Even at this small size, the 4KP Plus stays nice and cool. The sides are vented, which allows for plenty of air flow. Moreover, the case is constructed from metal, not cheap plastic, providing superior heat dissipation. 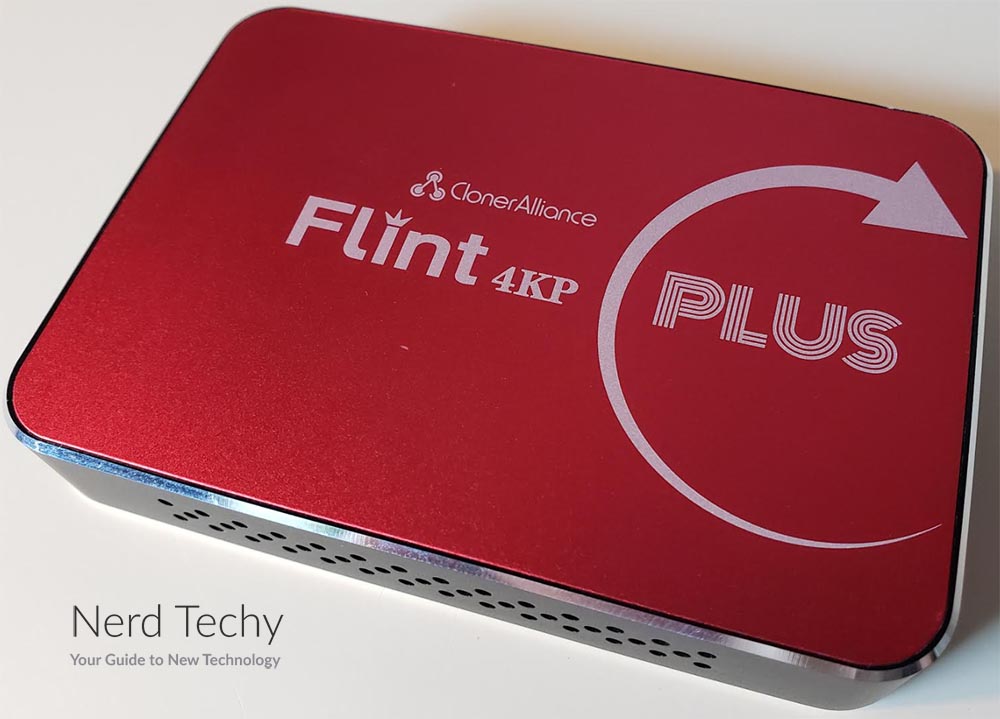 The input and pass-through HDMI port are located on the same end of the case. On the other end, you’ll find a USB Type-C port for sending the output signal to your streaming computer. There’s also a mic port, and a line in and line out audio port for speakers or headphones. The kit includes all the cables you need to get started. To begin with, you get a short HDMI cable. You also get a USB Type-C to Type-A cable with a pair of Type-A to Type-C adapters. Unfortunately, the Type-C cable has a loose fit. An ordinary iPhone Type-C charge cable fit just fine, so it seems to just be a cheap cable. If you’re on a Mac and you’re getting a “USB device using too much power” error, try using a different cable.

If you prefer not to mess around with cables, consider the ClonerAlliance Chert 4KC. This is a more minimalist capture card, with a built-in USB Type-C pigtail. That said, it doesn’t have HDMI pass-through for using a primary display. In other words, it’s only really useful for recording reviews or lets plays. 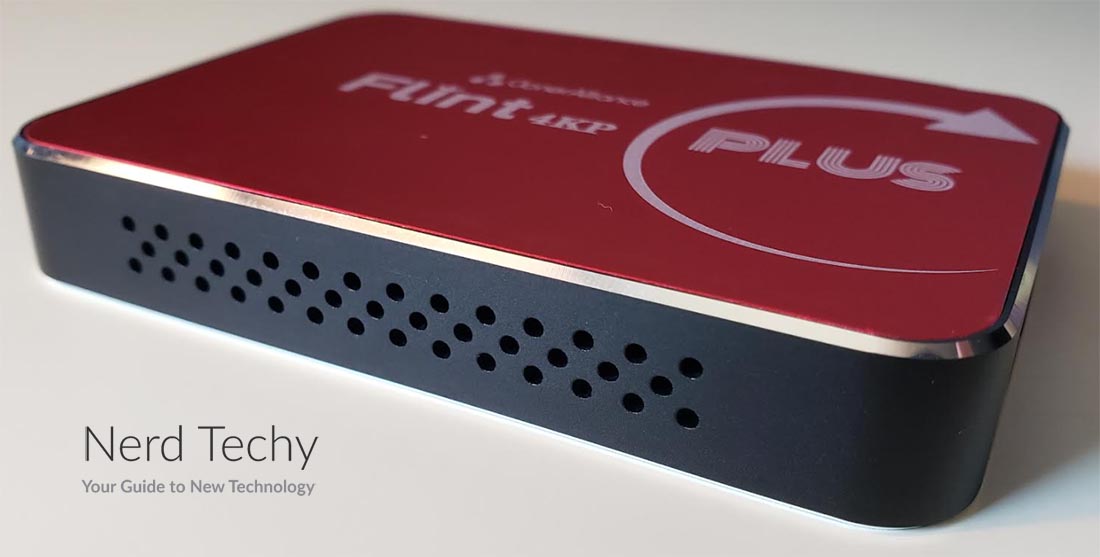 Setting up the Flint 4KP Plus is simple. First, use an HDMI cable to connect your source device to the 4KP Plus “in” port. Next, connect the 4KP Plus to your streaming or recording computer with the USB cable. If you want pass-through signal for a main display, connect the 4KP Plus’ “out” HDMI port to that display. If you want to record voiceover information or a commentary. You can even use the Line Out connection to plug in a set of speakers. The speakers will play your game or video sound, along with your own voiceover. 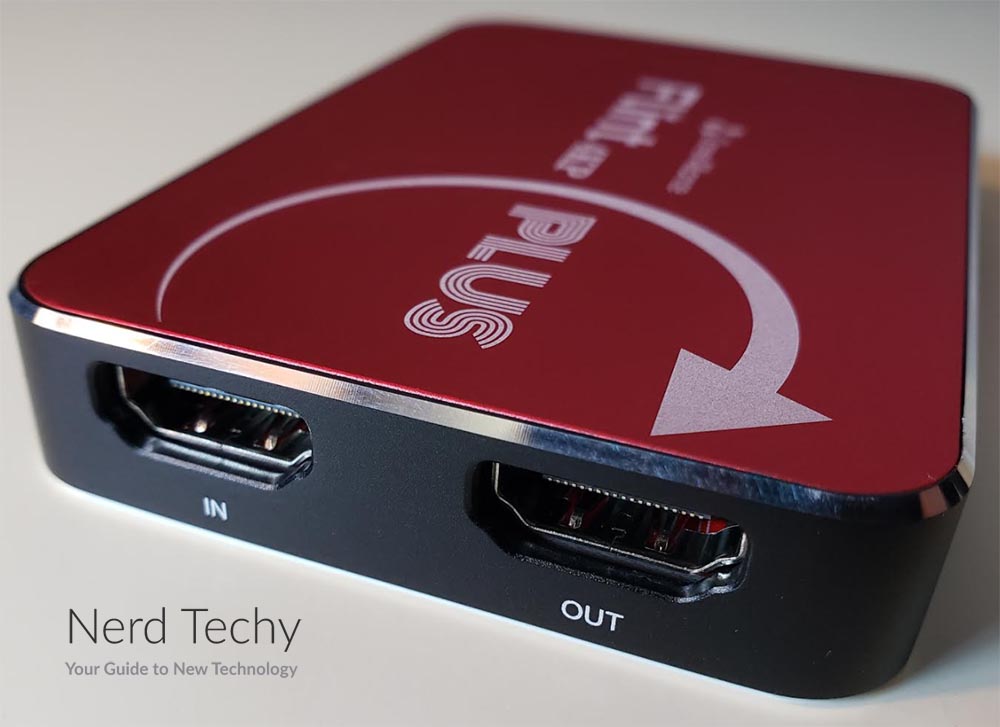 The Flint 4KP Plus is compatible with pretty much every computer. It uses the UVC standard, so it should theoretically be driver-free on any system. You can use it with all versions of Windows, all versions of MacOS, and any Linux version with a GUI. It’s even compatible with a wide variety of third-party streaming software. You can use the 4KP Plus with OBS, Wirecast, QuickTime, XSplit, VLC, and several other popular programs.

One thing we should note is that the audio input must be set to either Stereo or PCM. The 4KP Plus will not support Dolby, or indeed anything other than Stereo or PCM. As long as your output device is set to one of those options, you’re good to go. If it’s not, your stream is not going to have any audio. Unfortunately, this isn’t in the setup instructions, so it can cause trouble if you’re not prepared. We would have liked if ClonerAlliance included this basic information in their packaging. 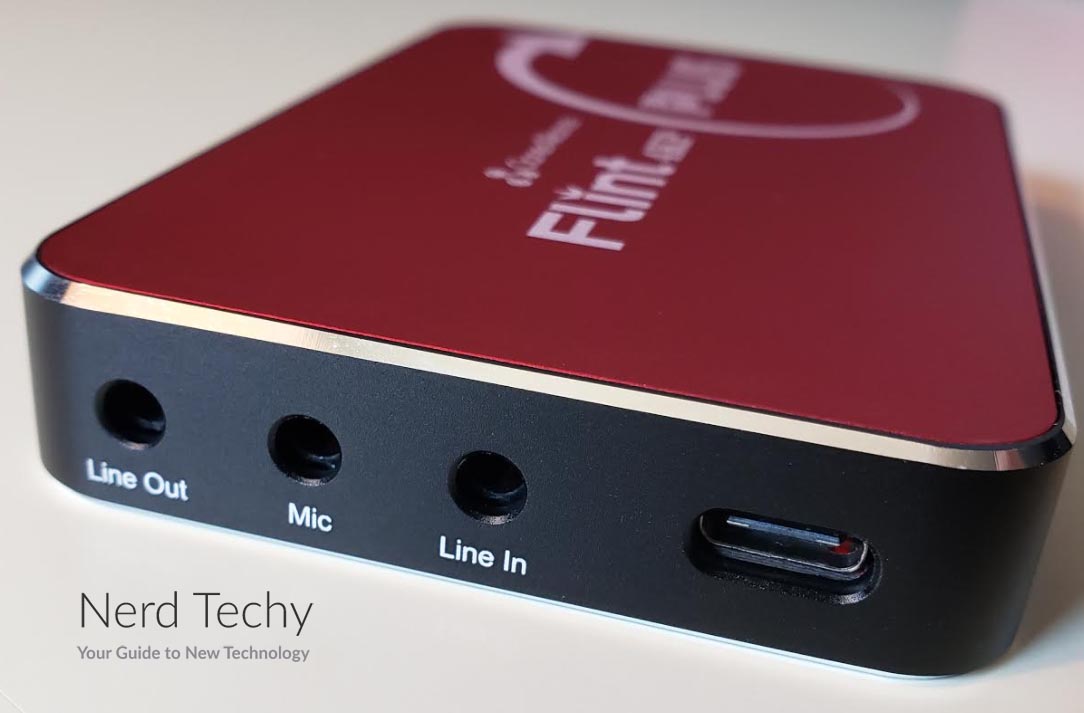 When it comes to video performance, the 4KP lives up to its name. It supports pass-through in 4K at 60 frames per second. It also supports streaming at 1080p and 60 frames per second. Currently, this is about as good as you can expect without some seriously expensive pro-grade equipment. Besides, few customers have fast enough internet to stream in 4K, and fewer social media services offer that resolution. In practice, if you’re getting 1080p and 60 frames per second, you’re getting plenty of quality for streaming. Moreover, the performance of the capture card is virtually zero latency. This is essential for gaming streamers. 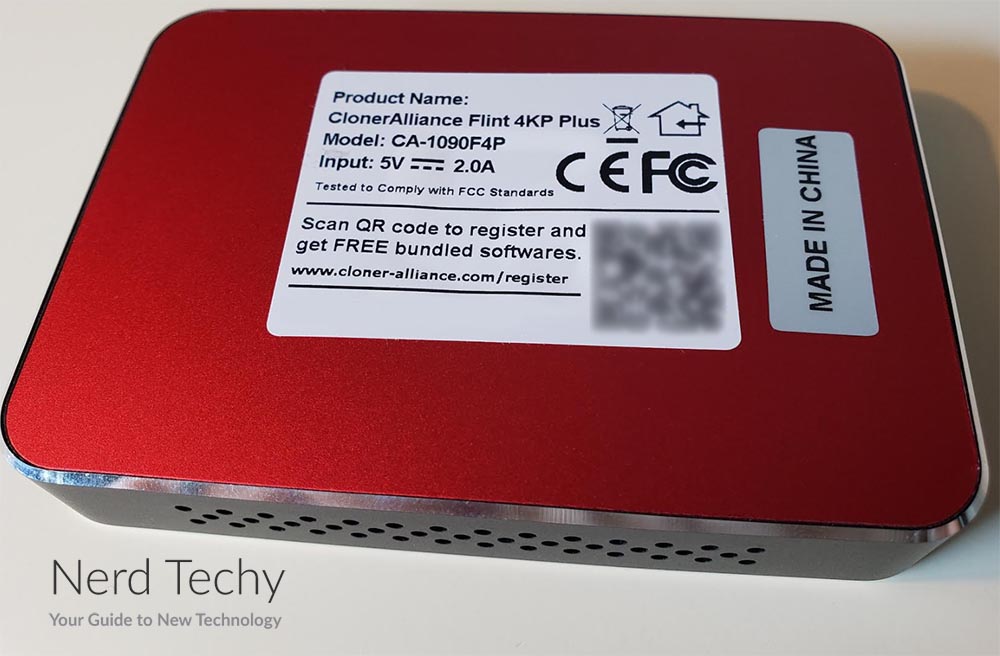 The 4K recording option is useful if you’re going to edit your material. For instance, if you’re doing a review or a lets play, you’re probably going to tinker with your video. In this case, you’ll still probably only offer it in 1080p. But by recording in 4K, you ensure that you get the maximum possible quality in the finished project. 4K is also useful if you’re a photographer or videographer. You can get very high quality video transfer for producing professional Blu-Rays.

Along with the capture card itself, ClonerAlliance includes a few pieces of software to get you started. Most notably, HDML-Cloner Pro Helper will let you record scheduled TV shows. Basically, it’s like a DVR for your gaming PC. The rest of the software suite consists of a few basic editing tools. It’s nothing fancy, and you can get better software for the cost of a few bucks. Still, considering that it’s free, it’s not a bad thing.

As you can see, the ClonerAlliance Flint 4KP Plus is a very well-engineered capture card. It’s compact, lightweight, and powerful, with a durable metal design. It also runs cool, even when you’re using all of the ports. Be warned, this same quality of construction doesn’t apply to the cables. You’ll probably want your own USB Type-C cable at a bare minimum. We also would have liked to see better instructions. If your capture card requires a particular audio type, it should say that.

Even so, the performance left us very satisfied. We particularly liked the built-in line in port for audio. This gives you the option to record voiceovers seamlessly even if you’re not in your game’s voice chat. We also appreciated the quality of the signal itself. You get full 1080p at 60 frames per second for streaming. For other applications, you get an even better 4K signal at the same framerate. Equally as important, there’s almost zero latency in the signal. So you won’t see your K/D ratio drop every time you fire up your streaming app.