Radar ahead can mean danger. It could mean you’re being sighted by the radar gun of a police officer, or are coming up on the radar of a traffic light camera. It could be worse. Whatever the case may be, it helps to know what’s on the road ahead of you. Which is precisely why a lot of people are drawn to radar laser detectors.

The technology underlying the Cobra DualPro was originally engineered by the US Escort Carrier engineers. Applied outside of a military capacity, the DualPro mostly exists to help alert drivers about upcoming traffic enforcements. That includes red light cameras, sensors that are trying to clock your speed, and similar roadside threats. 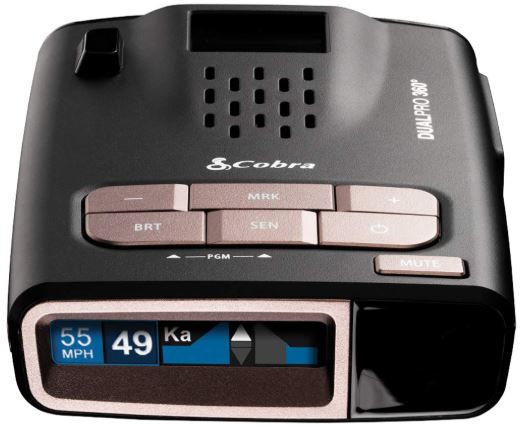 But these days, radar detectors do more than detect radar. For instance, the DualPro uses in-vehicle technology to filter out false alerts. That way, you don’t get an alert every time you drive past a grocery store, or some other store that’s using radar to automate their front doors. Additionally, DualPro makes use of fairly cutting edge Auto Learn tech, paired alongside GPS filtering to gradually improve the accuracy of your readings over time.

Inside the unit, you’ll find there are actually two separate antennas. These dual antennas are critical to helping allow the detection radius of the unit to hit that advertised 360-degree mark. But great hardware can actually be underwhelming if not paired with great software services as well. So how does the Cobra DualPro work when put to the test? 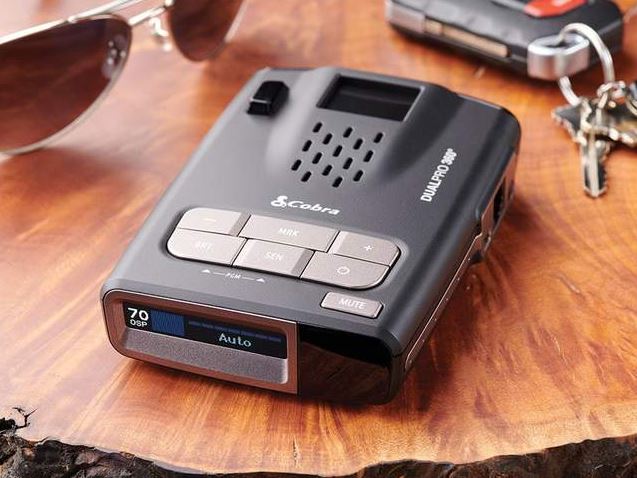 Physically speaking, the DualPro Radar Laser Detector measures roughly 5 x 3.5 x 1.2 inches, and weighs the better part of 9 ounces. That makes it a little bit hefty, but not too hefty to safely secure on or near your windshield. Likewise, the relatively small size of the unit means you don’t have to worry about it obstruction your view of the road if you decide to go with a windshield mounted installation position.

For installation, you’ll find the DualPro can securely attach alongside the EZ Mag windshield mount. It also includes a smart-cord, intended to be connected with the USB charging port on the unit. Once you’ve stuck the detector in place and ran the cord, you’re pretty much done with installation. The process is quite quick and smooth. 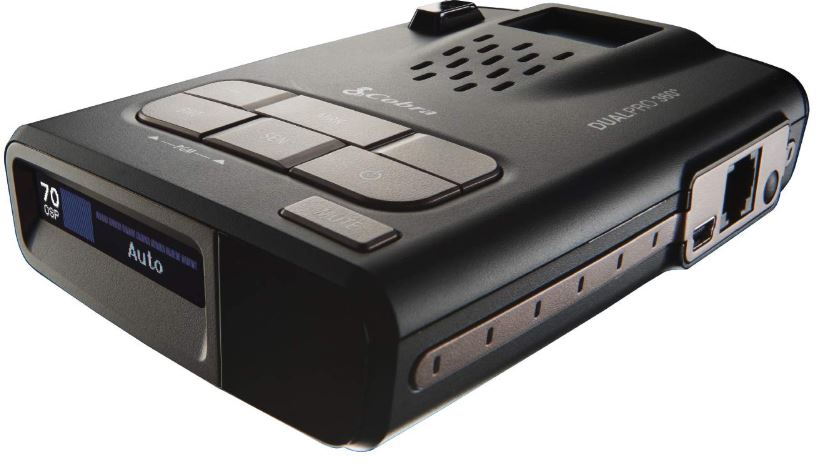 Likewise, the topside of the unit isn’t exactly complicated. You’ll find a total of six different buttons, most of which are very intuitively labeled. There’s a plus and minus button, which allows you to move between different menu options. There’s a power button, a button that allows you to adapt the sensor settings, and of course a mute bottom.

The mute button is actually pretty handy if you happen to drive through an area with a ton of radar, and you get tired of hearing the machine beeping at you every few seconds. But since there are also features to restrict false detections, you don’t end up needing the mute button very often.

Anytime you’re selecting a piece of hardware with a companion app, and the app is critical to the management of your system, it’s pretty important to take a moment to look inside and see how well the app performs. Here you’ll find, for the most part, the app is pretty straightforward and easy to understand. For instance, you navigate around a screen that’s based on a Google Maps layout, which should give you a better idea of what to expect.

Across the map, you’ll find a number of locations highlighted where you’ve spotted cameras in the past, or where other users have identified the location of cameras. That way, you can tell if a camera is coming up, even without the radar running. Every year, roughly 100 million sensor reports are submitted through the iRadar app, allowing you to make use of other driver’s data as well.

For configuration, the settings window provides a couple of cool options as well. There’s standard stuff, like being able to micromanage the Bluetooth and Wi-Fi settings, and there’s a number of detailed alert types and audio alert settings. For instance, if you find the audio alerts are playing a little too loudly or obnoxiously, you can raise or lower the volume. There’s also a car finder feature for people who have lost their vehicle and need to track it, though being able to use that feature requires you have an operational GPS connected with the DualPro.

As a radar detector, this device is built around a superheterodyne, and varactor-tuned VCO. As such, operational bands include the X-band at 10.525 GHz ± 25 MHz, the K-band at 24.150 GHz ± 100 MHz, and the Ka-band at 34.700 GHz ± 1300MHz. Similarly, like you can tell from its name, the DualPro also handles laser detection, at 904nm and 33MHz bandwidth. And as mentioned earlier, this design uses both front and rear sensors, allowing it to detect in a wide 360° radii around the unit.

Having unlimited access to the area around you, these dual antennas allow for lightning fast detection. That’s also due to the included DSP tech, which helps find potential threats with a greater degree of accuracy and speed. Again, that’s largely because both the front and rear antennas are working to scan in the area around you, allowing you to more accurately pinpoint the signal and its location.

Another thing the DualPro does exceptionally well is it helps reduce or otherwise eliminate false alerts. But at least part of that is on you to manage from inside the app, changing the sensitivity thresholds of your detector. With a little configuration, you really can receive fewer false alerts, and so make more informed decisions.

Additionally, these sensors are based on an AutoLearn algorithm, capable of providing a total of five levels of filtering, so you can always hear or see threats on the road. That’s because it’s possible to connect the Cobra DualPro to an iRadar system, allowing you to better pinpoint upcoming threat alerts, including the location of red light cameras and police.
The iRadar app is free, and included with the DualPro. If you decide to use it, it’s supposed to deliver better crowd-sourced alerts through Bluetooth. That way, you can use the alerts that have been established by other users. So if there’s a red light camera on the road ahead of you, and you’ve never seen it before, the DualPro will know about it before it’s even detected the radar! 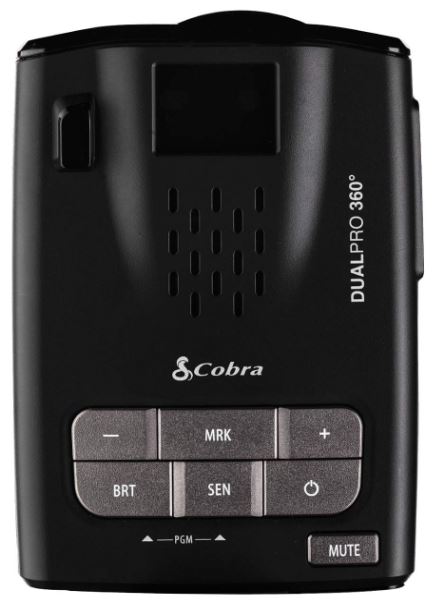 To make things even more configurable, you can use an optional Defender Database subscription. That way, if there’s a cop who always parks behind a billboard at the end of the road, user data can help you locate those potential threats without actually having to detect the radar. So even if they’re not running radar until the last moment, you can still predict and avoid them.

The user display is surprisingly very readable, partially because it uses a multi-color graphical interface, and partially because it’s actually an OLED display. OLED screens can deliver brighter-brights and darker darks. Speaking of brightness, it’s possible to adjust the display through five brightness settings, or move to the full dark mode. The dark mode is great for driving at night, if you don’t want the screen to be a distraction. 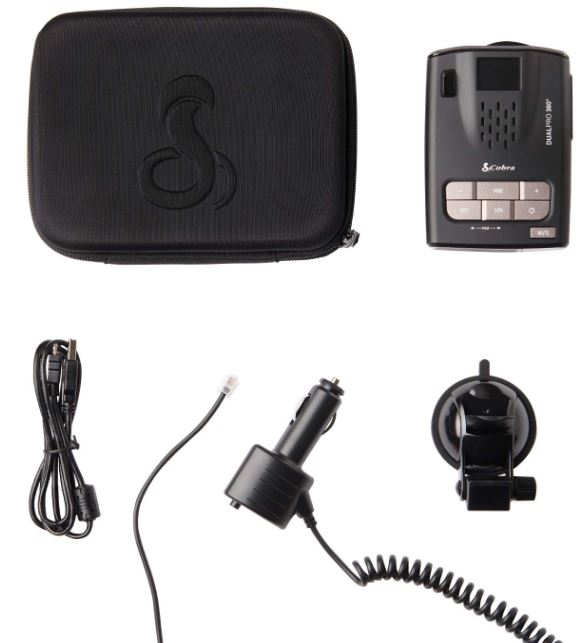 The DualPro allows for much simpler communication between the detector, the app, and yourself, allowing you to keep the operation of your radar detector basically an effortless process. On the display, directional arrows can help point you in the direction of potential threats, as well as helping you narrow down the type of threat that lies ahead.

Naturally, if you’re driving, you’re probably not looking at the radar detector all that often, especially if you’re being a responsible driver. Which is why the DualPro includes voice alerts to help make things even more effortless. Those voice alerts are available in two languages. You’ve got to pick between English and Spanish, which isn’t exactly an endless selection. But it’s nice to have options.

The Cobra DualPro includes an EZ-mag mount, a Smart-Cord USB cable, a carrying case, and a quick start guide. The smart cord cable is basically just a cigarette lighter jack that terminates in a USB connection. The EZ mag mount is fairly fancy because it allows you to attach and reattach the unit as needed. So if you need to take it out of your vehicle at night, or to put it into your glovebox between sessions, doing so is about as simple as attaching and reattaching a suction cup to your windshield or dashboard.

There are also some optional accessories you can pick up from the DualPro. For instance, the jump starter allows you to stay on the road without needing a boost from someone else, should something happen to the battery.

Finally, it’s worth noting that there are two locations where radar detectors are not legal in the United States. The first location is the state of Virginia, the second location is Washington D.C.

Who Should Choose the Cobra DualPro 360° Radar Laser Detector?

The Cobra DualPro 360° does considerably more than an entry-level radar laser detector can offer. It has the ability to detect essentially all commonly used forms of radar and laser detection. And even when you’re not using the actual radar detector, it’s possible to navigate almost equally effectively using the data stored inside the free app. Between the two, you should be able to nearly always spot threats on the road before you actually see them with your eyes.

With that said, not everybody needs a unit that’s quite this powerful. If you could get by with an entry-level unit, you would still be able to detect most types of radar, in most situations. But the occasional signal would slip through, and you’d end up getting more false alarms. Perhaps that’s the one event that would result in you ending up getting a ticket or otherwise having an issue. Which makes the DualPro a good choice for someone who’s actually serious about radar detection.