Air pollution is a big deal. Calling it pollution is really a bit of a euphemism because there are some pretty terrible health consequences to breathing polluted air. And those consequences apply to every person, whether they have allergies, asthma, or no health conditions at all.

In fact, studies have found pollution causes a person to age faster on the biological level, especially young children. People who live near highways have been found to have a significantly reduced lifespan, which is partially believed to be the result of brake dust particles that are found in the air.

Of course, people have a hard time becoming convinced of preventive medicine. Everybody thinks that the worst will never happen to them, which is why we don’t care about prevention, we only care about cures. But the facts are quite clear. Air pollution is dangerous. It has a concrete health impact on virtually all people exposed to it. And it’s possible to make minor efforts to circumvent unnecessarily exposure

Sadly, it can actually be difficult to protect yourself from pollution. Because with pollen or dust, you’re actually looking at a fairly large particle, which is easily caught by average filters. But the smaller the particle, the more you have to be worried about. And smaller particles are rarely caught by standard filters because they’re simply too small. 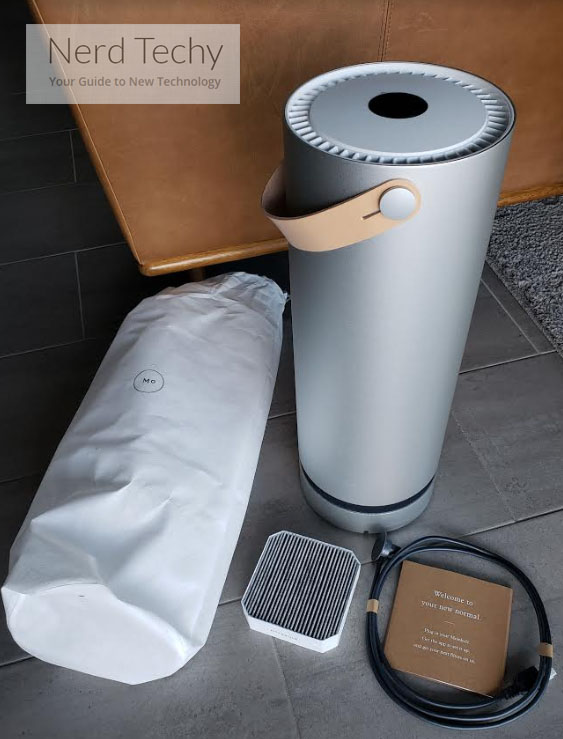 Another big problem with regular air purifiers is they mostly work by collecting pollutants into one place. This design isn’t bad, but it does have some problems. Namely, you can continue to spread those pollutants through the air after you’ve collected them. As such, the Molekule Air Purifier was made to use of nanotechnology in order to help destroy pollutants instead of merely collecting them. 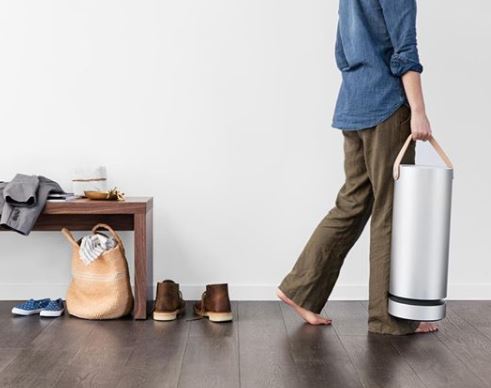 Because collecting bacteria and disease into one place can backfire. As filters gradually collect spores and dirt, those particles never actually go anywhere. They just sit in the filter, and have the opportunity to expand and grow. Meanwhile, air that you’re breathing is being passed through the filter.

The filter itself is constructed quite similarly to a regular HEPA filter. It’s stuffed inside of a cylindrical body, which stands upright. And during operation, the Molekule Air Purifier is mostly silent, though if you place your ear directly next to the machine you may be able to hear the whirring of a small fan.

The outside of the purifier is largely made from machined aluminum, which looks pretty high class. Though this air filter does vaguely resemble a garbage can, it doesn’t quite have the diameter of one. And the beige handle on the topside makes it possible to lift and move the unit as needed, making it portable from one area your home to another. 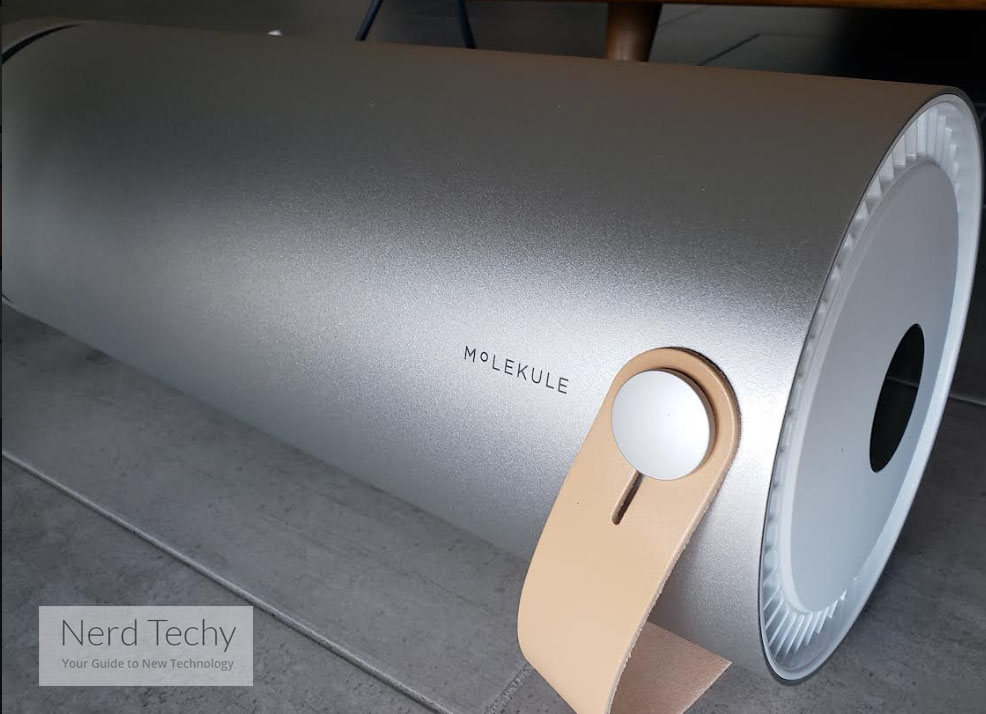 Additionally, it’s possible to connect and control the Molekule with a touch screen display. That display as positioned atop the unit for easy access. Though most people will probably end up using their smartphones to connect with the free app. The app lets you change power modes and monitor filter life. For instance, you could set Molekule to Boost Mode while you’re not actually at your home, and then enter Auto or Silent Mode when you are.

The idea of destroying the stuff collected by an air filter isn’t totally new or innovative. People have been trying to do it for literally decades. The difference is that in the past, people have gone about that primarily with the aid of UV-C. By battering your filter with ultraviolet light, you can do a great job of killing the bacteria and mold that become trapped inside. 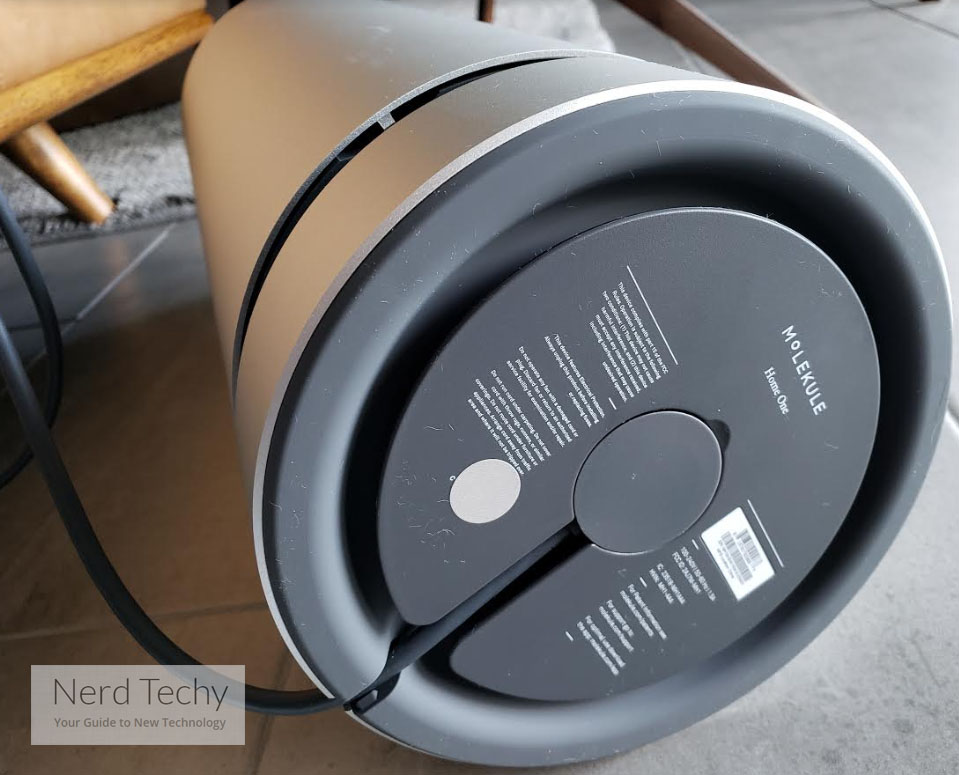 However, the tradeoff is that this process leads to the creation of ozone. And even though ozone is great when it’s up in the sky protecting you from the sun, but it’s not so great when it’s something you’re breathing in. So the Molekule Air Purifier works without generating ozone. So how does it work?

For starters, air circulates through a pre-filter, where it’s able to capture larger pieces of debris. Or at least, larger debris from the perspective of a human. It’s in the pre-filter that you’ll find dust and pollen being captured. Smaller particles that move through the pre-filter will head on to what they’re calling the PECO filter, as opposed to a regular HEPA filter.

HEPA filters are typically unable to take care of the smallest pollutants, especially when they become smaller than 0.3 microns. Of course, there are some filters you can find that specialize in getting smaller particles. But even though they cost more, they still can’t get the tiniest particles, which are the ones you want to get the most. 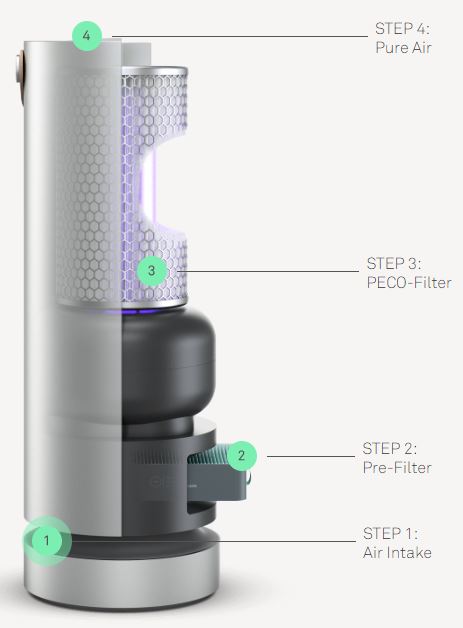 That’s because it’s the teeny-tiny particles that our bodies have the hardest time processing. When a tiny particle gets trapped in your body, there’s a good chance that it’s never coming out. Which is precisely the danger when it comes to things like asbestos. An asbestos fiber that gets lodged in your lungs probably won’t be dangerous for the first five or ten years it’s in there. It’s because the particles stay in there forever that they become an issue.

Again, the Molekule Air Purifier makes use of a PECO filter instead of a HEPA filter, and the big difference is that the PECO filter oxidizes captured pollutants. This allows the PECO filters to destroy pollutants that are roughly a thousand times smaller than the kind of particles you can pick-up using standard HEPA filters. The free radicles that are used to attack the stuff captured in your filter is destroyed, resulting in the production of water, CO2, and some trace elements. 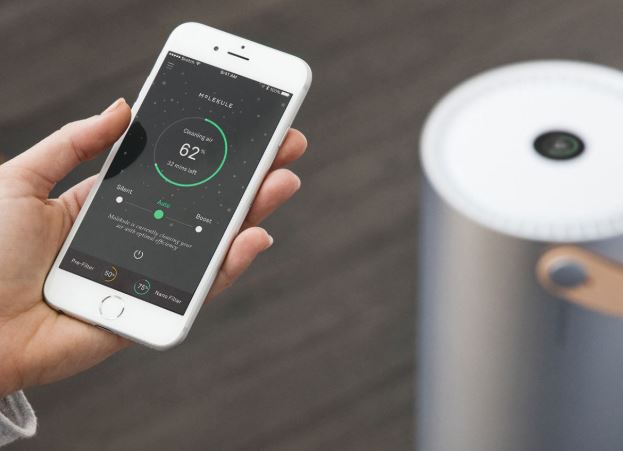 The reason why you’re supposed to swap your HEPA filters every few months is largely because they become filthy. At some point, you’re no longer effectively filtering the air. Instead, you’re simply passing all your air through a bunch of dirt and disease. By contrast, the Molekule’s PECO technology is supposed to be able to destroy 3.4 million mold spores in under an hour. Meanwhile, those mold spores would just remain trapped in HEPA filters. For people with asthma or allergies, mold allergies, or chemical sensitivity, that can be really bad news.

You’re supposed to be able to get around six months of filtration from the included PECO filters. The total cost of PECO filters, replaced on a regular schedule, is marginally smaller than the cost of HEPA filters. But the costs are actually quite close. It should be noted you actually do have to swap the pre-filter every 3-4 months or so. 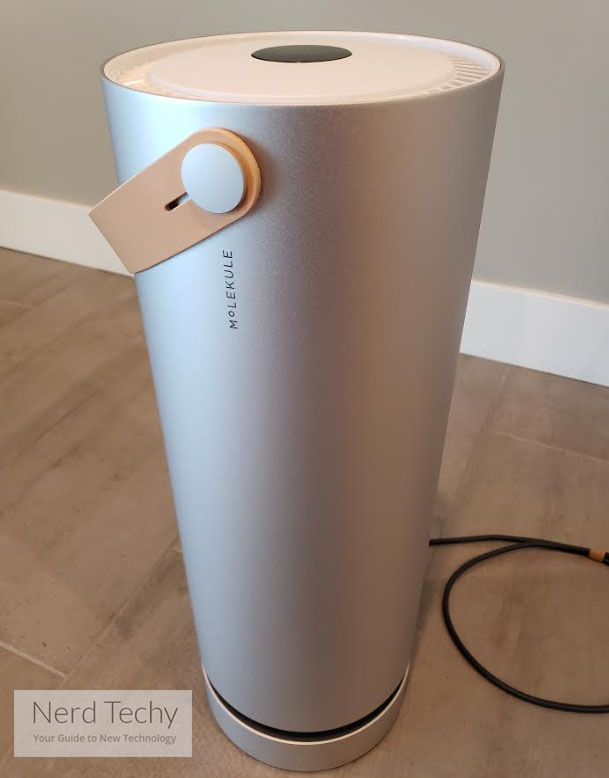 Installing and removing the filters is also quite simple. You pretty much just lift the old filter out of position, then gently drop a new one into place. Molekule allows you to get a new filter pack every 6 months, on schedule, through their subscription service. By contrast, HEPA filters are supposed to be swapped every 3 months or so, which means you need to swap them literally twice as often. That requires you to actually remember the filters need to be swapped, and then to go through with it. And it’s pretty easy to forget to swap them on time, which is one of the appeals of only having to do it twice a year instead of four times or more.

One problem with air purifiers is that size matters. In order to clean an extremely large volume of air, you need an air purifier rated to handle that area. So there are trade-offs to size. Since you’re looking at a unit with a smaller internal fan, you’re going to be able to expect around 600 square feet of cleaning. In other words, this filter is about good enough for a small apartment. 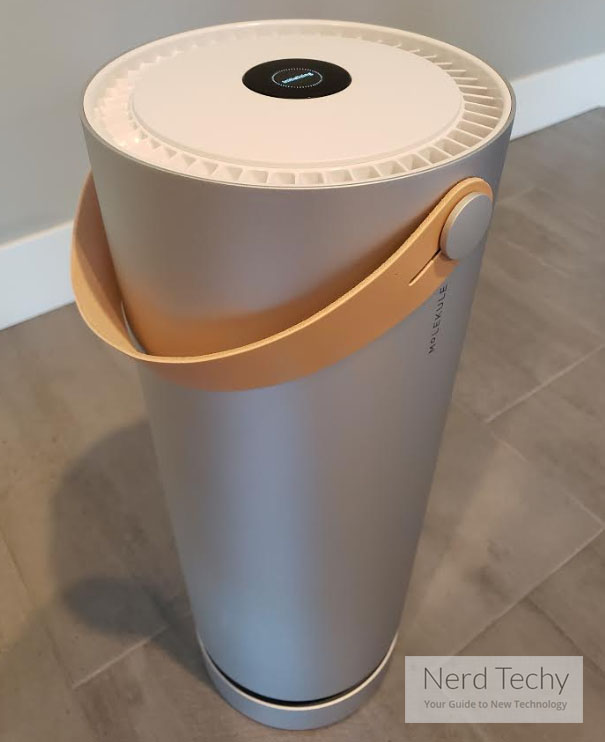 Another thing to notice is the Molekule was designed with a 360-degree air intake system, allowing it to suck in air from all sides, and then evenly project clean air to all sides of the device. As such, there’s no great need to think about placement of the unit. Though some people like to place filters next to their desktop computers because it can prevent dust from becoming trapped inside your PC.

Who Should Choose the Molekule Air Purifier?

The Molekule does a pretty good job at destroying pollutants and allergens. For people who have issues with allergies, that can make it an excellent alternative to traditional air filters. But for those types of concerns, it’s really chemical absorption that helps distinguish the Molekule from other air filters. This filter is fantastic at trapping the various chemicals and chemical odors that may be flushed through your air supply. 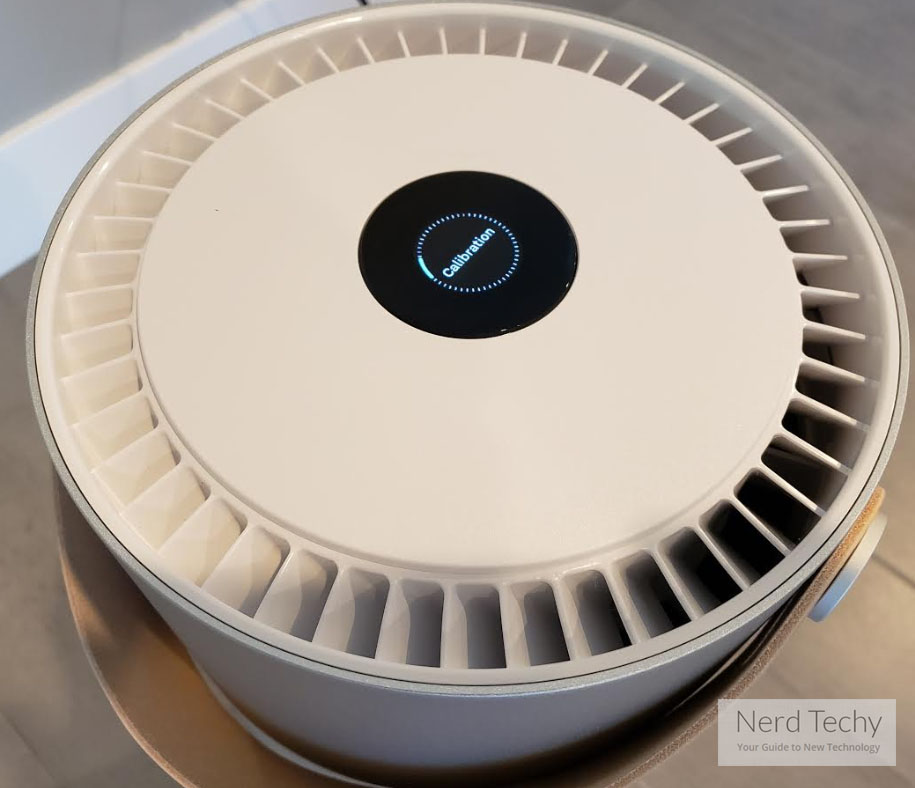 For people who don’t have allergy issues or sensitivities, Molekule may still make some sense. It partially depends on where you live, and what kind of pollutants you’re being exposed to. If you’re someone who lives in the city, or near a popular road, then you have some good reasons to consider purifying your air. Especially if you’re around a city that has higher levels of air pollution. 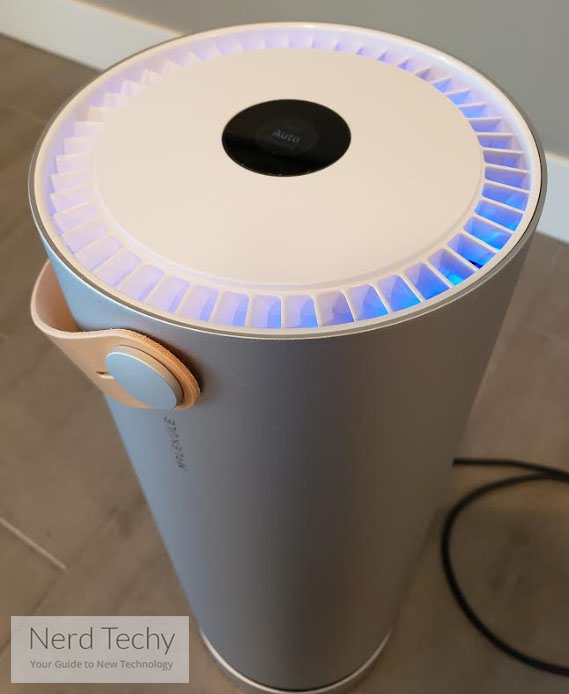 There’s one dark cloud on the horizon. The Molekule Air Purifier will cost you two or three times as much as a decent air filter. And since the cost of filters is comparable to the cost of HEPA filters, it’s not like this purifier will gradually pay for itself. Unless you start to put a high financial value on the convenience of only having to swap your filters occasionally.