Instax cameras can be pretty fun. But as more and more have hit the market, it’s been tougher to choose between them. Some have compelling shooting features; others are aimed more at higher quality prints. Where does that leave the average user? It can be hard to tell. But picking a solid Instax Camera is mostly about managing your expectations.

In a lot of ways, the only reason why anyone still cares about Fujifilm really comes down to Instax cameras. Instant cameras can be a lot of fun, but they can also be a lot of trouble if you don’t end up with the right one. In this instance, the Mini LiPlay is the latest among Fujifilm’s rather long line of Instax cameras. 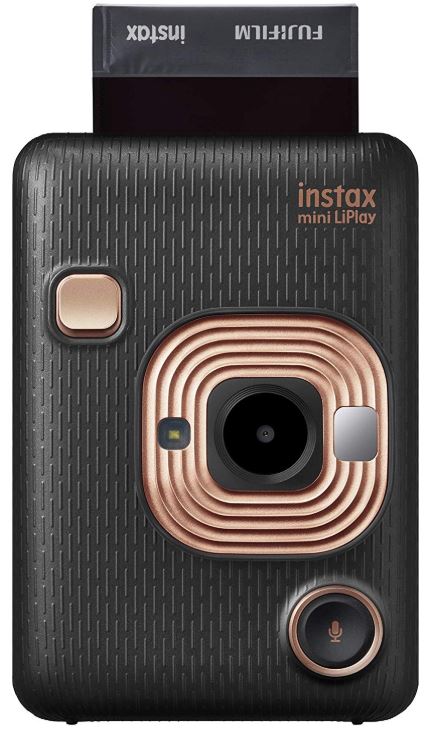 As you should expect, the LiPlay isn’t just a camera, it’s also a printer. It’s basically an Instax Share printer that’s had a digital camera stapled to the front side, and an LCD screen positioned towards the back. So in a lot of ways, this design is like cheating the idea of an instant film camera.

Because the film isn’t actually being exposed to the lens, similar to Polaroid Snap cameras. Since this kind of “cheat” is being used, the LiPlay is a far more practical device, both with respect to its size and the cost of regularly using it. Outside of cost, you ought to find the LiPlay is also quite fun to use. That’s partially because they’ve taken the Instax experience and refined it beyond that you may expect from other instant cameras — even though it doesn’t have all of the very high end features you might find on other Instax models. 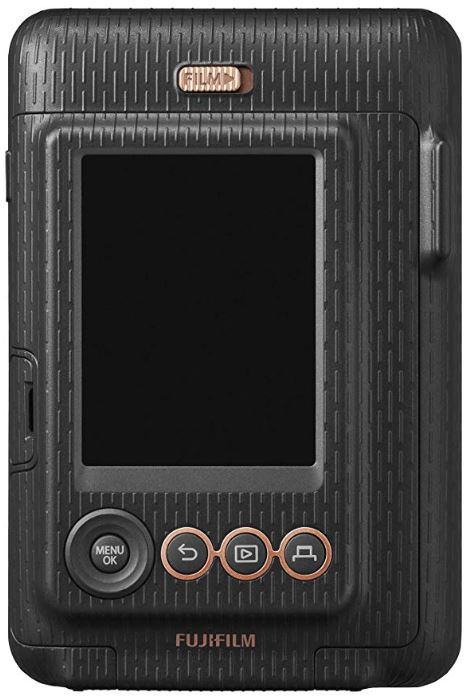 Admittedly, a large part of what makes this camera so functional is the companion app. The mobile app is fairly smartly designed and just as approachable as previous generations of the software, and the audio recording tools are adaptable, and the QR-code playback features are almost endlessly entertaining. But how does the Mini LiPlay compare with previous generations?

LiPlay is available in a couple of different colors, including stone white and standard black. In terms of size, the camera is pretty similar to a bar of soap, with a couple of stylish accents around the edges to give the device more of a retro feel. Though the surface of the camera is quite slippery, which isn’t totally optimal for holding it, especially if you happen to have wet hands at the time. 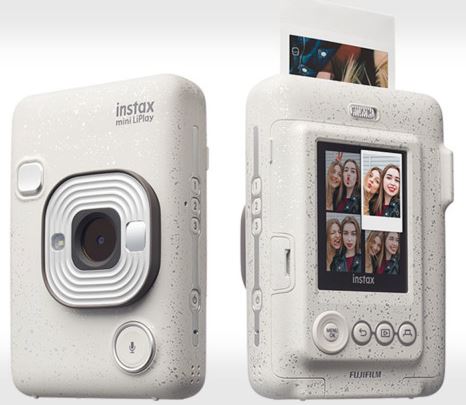 Unfortunately, the arrangement of the buttons doesn’t help you much in that respect, either. On the front right, you’ll find the shutter button in a fairly standard positioning. But it’s tough to reach without your other fingers covering the lens or the flash. Likewise, the audio recording button is found on the front, but positioned over towards the side corner.

There are also three shortcut buttons and a power button off towards the left side of the chassis. This positioning doesn’t really seem to make any sense, but it is something that you can adapt to with a little bit of time using the camera. In any case, the shortcut buttons allow you to rapidly apply frames to your shots, and to see a preview of the shoot before you actually snap the photo. It’s also possible to apply a frame after you’ve taken the shots, or to add speech bubbles, color effects, and a variety of similar stuff right from the mobile app. These kind of extras might not see a lot of use, but they can be a bit of fun, and are likely to be entertaining to younger users. 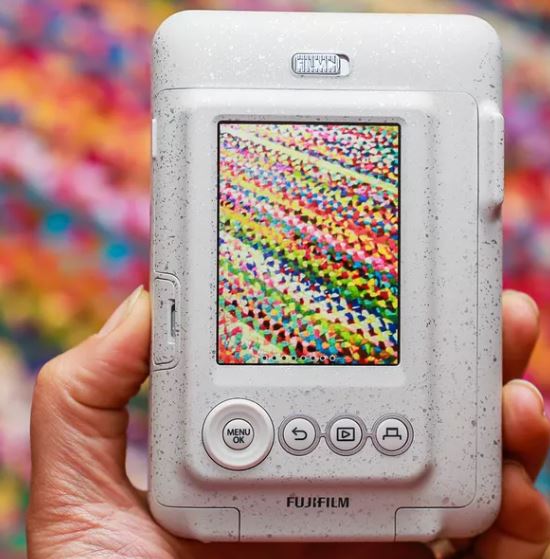 Additionally, those buttons let you access an exposure compensation suite, or to mandate the flash is turned on or off. This kind of simple design can be a good thing in some circumstances, and a bad thing in others. For instance, having the focus point towards the center of your frame requires you to recompose and focus every off-center shot, and the autofocus is fairly slow. That’s not ideal for taking quick shots, like you might at a sports game.

The LCD display isn’t anything special. It’s a lower resolution display, and the compared to a nice smartphone screen, the display certainly looks a little washed out. But for an Instax camera, that’s really not a big deal. What could be more of a big deal is that the screen isn’t a touchscreen. Skipping the touchscreen was probably in order to reduce the cost of the camera, but it probably would’ve made more sense, and might’ve alleviated some of the strangeness associated with the positioning of the analogue buttons.

For the most part, images get saved to internal memory, but you can alternatively use an SD card. You can get around 50 shots with the internal memory before you run out of space, and if you need to make some space, you can print photos and delete them off your drive, or you can just pull them over to an SD card.

As with shooting, the printing process is also pretty fun. While you’ve got shots printing, the screen will play an animation of the photo you’re printing out, sliding gradually in the direction of the film slot. The image on your screen then gradually becomes the print that slides out of the camera, which is very stylish. Even though this is just a silly gimmick, it’s pretty cool to watch.

For all its merits as a camera, the LiPlay is an even better printer. If you’ve got photos you’ve taken on a smartphone or another camera, it’s possible to send them over to the LiPlay for printing instead of shooting with the LiPlay. You’ll generally end up with marginally better results when you do this, at least, if you’re a person who’s using a higher end smartphone with a nicer camera inside. 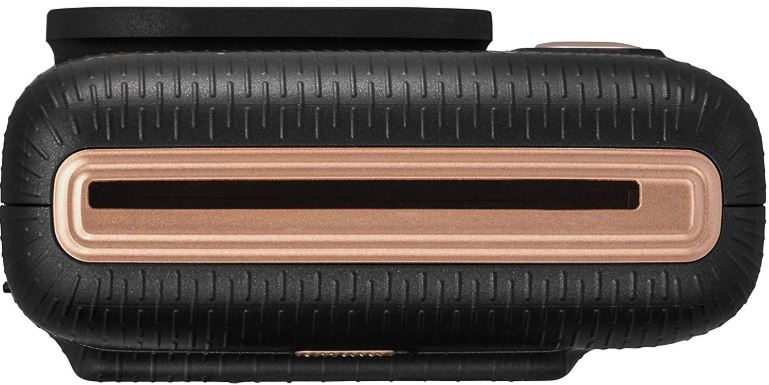 Admittedly, even if you’re using a fancy DSLR camera, your shots are going to come out looking like instant pictures, not like flawless masterpieces that were made in a professional print shop. However, that’s sort of the point of these cameras.

One thing to keep in mind is that printing from your phone can be a bit addictive. As mentioned earlier, it’s plausible the Mini LiPlay could end up saving you money because you’re able to be more selective about the things you decide to print. But at the same time, the opportunity to rapidly print things from your phone can be tempting. If you have hundreds or thousands of photos saved on your phone, the desire to print them may be overwhelming, which could easily become costly pretty quick.

There is at least one downside to the Mini LiPlay working with a fully digital camera – and that is you end up with a marginally worse battery lifespan. You can typically expect to shoot around two dozen photos, and print about two dozen photos, and that’s it. The battery light will pop on, and you’ll need to go recharge. That’s really not as good as you can expect from a variety of other Instax cameras. It’s even worse because you’re not allowed to remove the battery to swap it to another one. 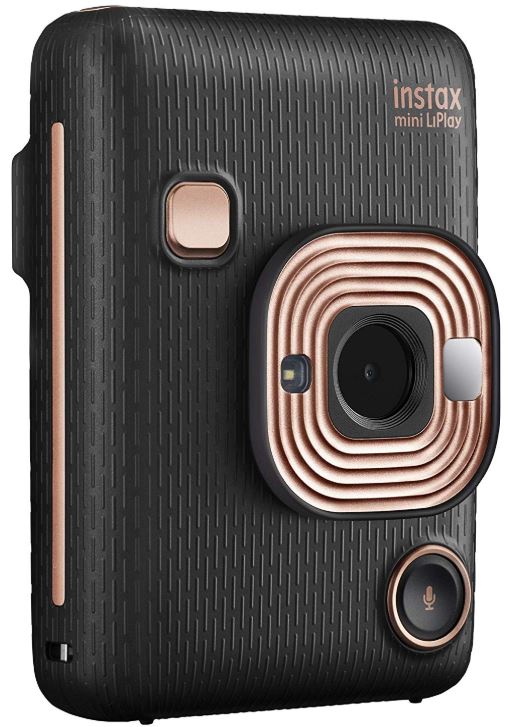 There’s some good news, though. You can recharge with USB, so you’re able to use traveling power stations like the Roamproof PWR27 to top-off your camera. And if you’re not stopping to print each and every shot you take, you’ll end up with better performance than a mere 24-shots.

Unsurprisingly, Instax cameras are often used for selfies. As such, these cameras are also usually made with a couple of cool selfie features. In this case, you’ll find the LiPlay allows you to use a built-in mirror adjacent to the lens, making it much easier to frame yourself while taking self-shots. And the audio recording can be handy, too. 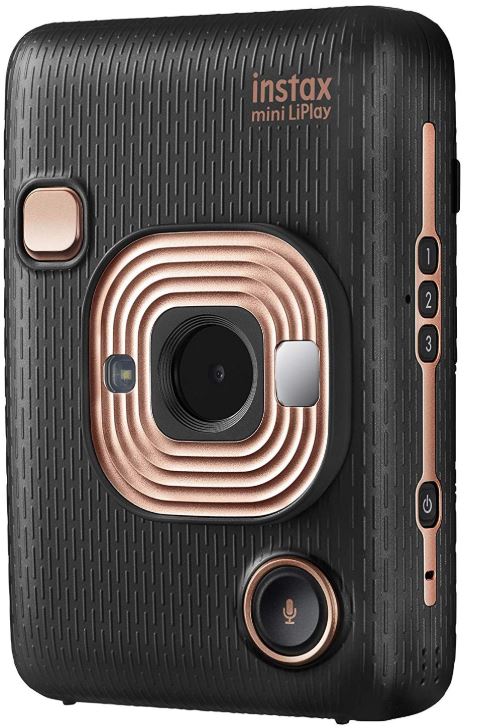 There’s a large microphone button which is positioned towards the front side of the camera, you press it to activate a 10-second audio recording. This feature is mostly for taking voice annotations, or making messages or loved ones. So how do people hear what you’ve said? When you hit the print button for an audio photo, you have the ability to select “print with sound.”

This works by creating a QR code that’s then overlaid atop the print. And you can position that code in the corner, or anywhere else that the framing of the shot will allow. Then someone can scan the photo with their smartphone, and see the original image along with the recorded audio message. The audio gets stored through a uniquely generated link on the Instax website. 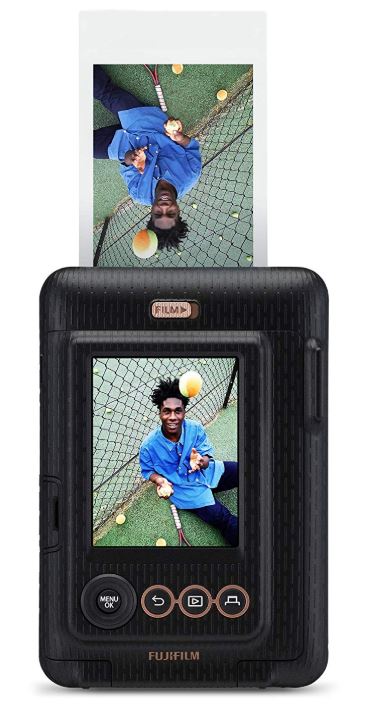 So hypothetically, in 15 years’ time, this feature may no longer work if Instax pulls support from their site. Additionally, you’ll need your camera to be connected to your smartphone for this to work because an internet connection is necessary, and you’ll need to leave both the LiPlay and your phone on while the image gets uploaded. But it all happens pretty fast.

Who Should Pick the Mini LiPlay Hybrid Instant Camera?

Instax cameras are mostly about the novelty of being able to print on the go. The Mini LiPlay does a good job of keeping that novelty feeling fresh with their sound recording features, strong app support, and generally strong functionality in the areas where it matters most. The app is every bit as solid as the camera itself. 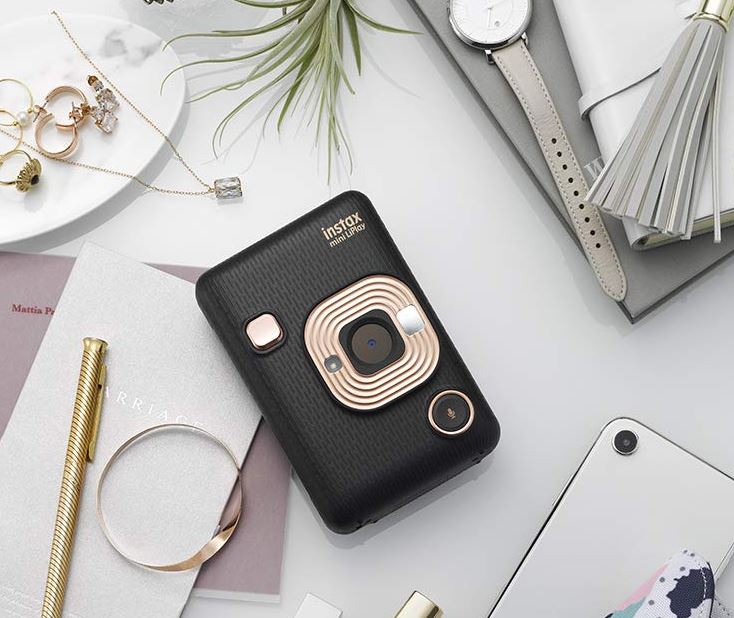 The physical buttons are a little clumsily positioned, and it would’ve been nice if this camera had a removable battery, or perhaps a touchscreen. But given its price, it’s hard to complain about those things. The 2.4 x 1.8 inch prints aren’t fundamentally different from the kind of prints you’ll get from other Instax cameras, but the digital-hybrid design behind the LiPlay certainly makes it at least a little bit unique. Though these cameras tend to be aimed at younger people, just about anyone should be able to have some fun with the LiPlay.