People have been using bike computers for decades. But as technology has improved a lot over the past couple of years, a modern bike computer can do much, much more than its predecessors. It can even take on some tasks that your smartphone is incapable of handing. At least, depending on how often you end up riding, and where you end up going.

The original SmartHalo launched on Kickstarter back in 2005. Since then, they’ve made a number of advancements in preparation for the SmartHalo 2. What kind of advancements? Well, compared to the first, you’re not only looking at a device with added features, but a device with a far more streamlined design. It’s thinner, lighter, and stronger across the board. 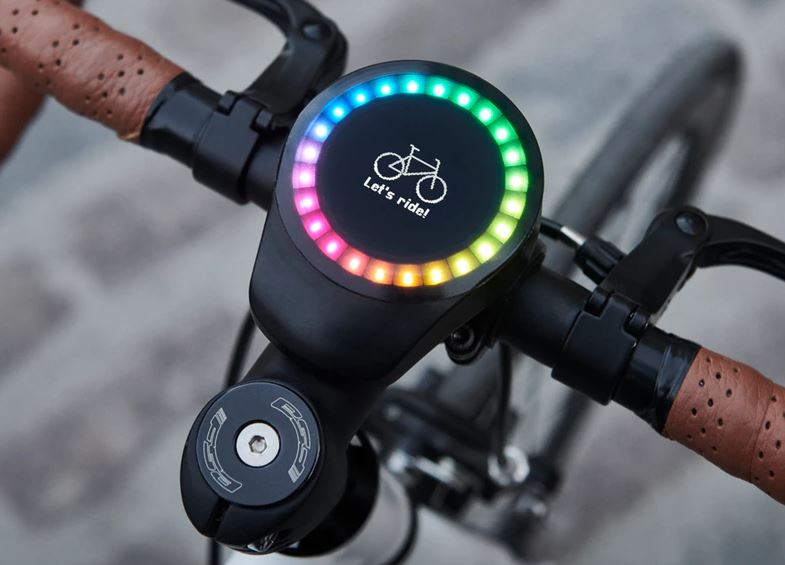 At the same time, the SmartHalo 2 isn’t supposed to be overly complicated. Rather, it’s supposed to show you what’s out there on your path without distracting you in the process. How well does it get that job done?

If you’re not familiar with the original SmartHalo, it might be worth starting with the basics. As this is a biking tool, it shouldn’t surprise you to find the unit is pretty much totally waterproof. You don’t have to worry about rain, sleet, snow, or mud. 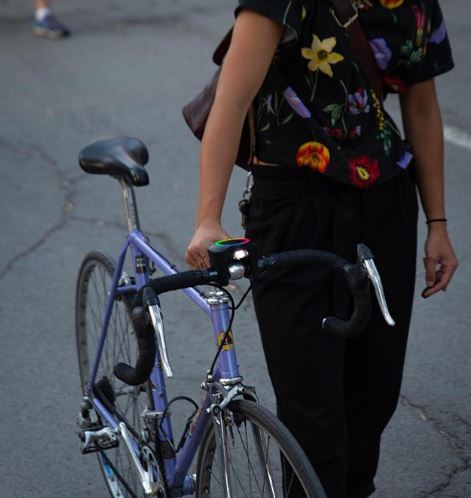 The center of the device has a PeekDisplay unit. Contrary to your expectations, this display is not actually a touchscreen. But it does allow you to keep a close and detailed look at your metrics while riding. The outside around the PeekDisplay is called the Light Halo, which is basically just a ring of LEDs that can help animate the data that’s available on various viewing screens.

It’s below the screen and light-halo where you’ll find a touch surface. The touch surface actually looks like nothing at all – merely like a piece of plastic that’s sticking out of the bottom of the display. But it’s here where you’ll tap, swipe, or otherwise interact with the display and the various metrics it can track.

For positioning, the SmartHalo 2 is locked onto your handlebar. The only way to remove it is a unique HaloKey. Since the locks are a little atypical, and the device is strapped to the handlebars, it’s actually pretty tough to steal or extract the device. Since it’s fairly subtle, the device also won’t draw much attention from passersby. 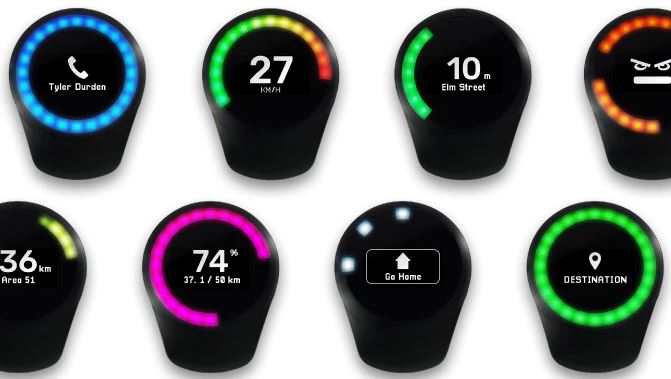 Of course, it’s important to remember that if your bike is stolen, the SmartHalo will be going with it. So even though the unit can’t easily be removed from the bike without the special key, you’ll still need to think about protecting the bike itself with whatever traditional locks you have available. Or with the included locking system.

Because it’s actually possible to use the SmartHalo on two separate mounting devices. The first is the SmartHalo anti-theft mount, which is included. It works by wrapping around your handlebars, and creating a round platform for the SmartHalo 2 atop your bike. The second mount is actually sold separately, but it’s a quarter-lock mount. These mounts are much smaller and easier to add or remove. That makes them better suited for rental bikes, shared bikes, or road bikes. Though the quarter lock mount will not protect your bike against theft, it will protect the SmartHalo device. 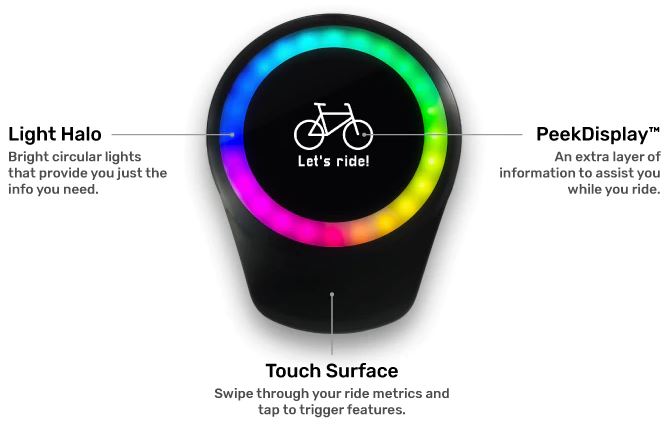 For additional protection, the alarm function can protect your bike with a 110dB noise alarm. Similar to a car alarm, this alarm is set-off whenever people touch your bike. There are also a number of sensitivity protections you can use, so your alarm won’t necessarily start screaming the moment a dog bumps into it.

In order to turn off the alarm, you usually need to use the SmartHalo app. But if you don’t have your phone on you, then you’ll be unable to enter a tap-code and shut things down. The tap-code actually works similar to inputting Morse code. You use your finger to tap for different periods of time on the base of the unit.

One of the most frustrating parts of using any bike computer is navigation. That’s because navigation is usually pretty clunky. But the SmartHalo 2 has done a pretty good job of smoothing things out. You basically just open the app, select your destination from a Google Maps layout, and then shove your phone into your pocket. That’s it – you’ll be on your way in no time. 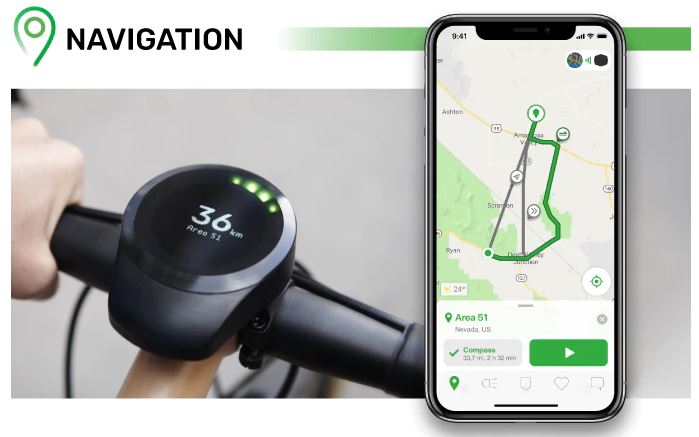 You’ve also got access to what they’re calling HaloRoute, which lets you select between alternate routes that are offered to you by the computer. You’re able to take the recommended route, the safest route, the flattest route, or the fastest route. You can also sort through paths by considering how hilly they are, what kind of roads are available, and the smoothness of the surfaces.

For instance, if you’re good biking over gravel and paved, but not cobblestones, you can sort that out in the app. Since everything is being done through Google, you don’t have to download special maps. And you can expect those maps to be updated with the same regularity Google puts into updating all of their maps.

For additional navigation, the compass mode will point you in the general direction of where you’re headed by using the halo’s lights to indicate where you should be going. For someone who doesn’t need to take a specific route to where they’re going, that can be quite convenient. Because it means you won’t get lost while exploring, or at least not hopelessly lost. 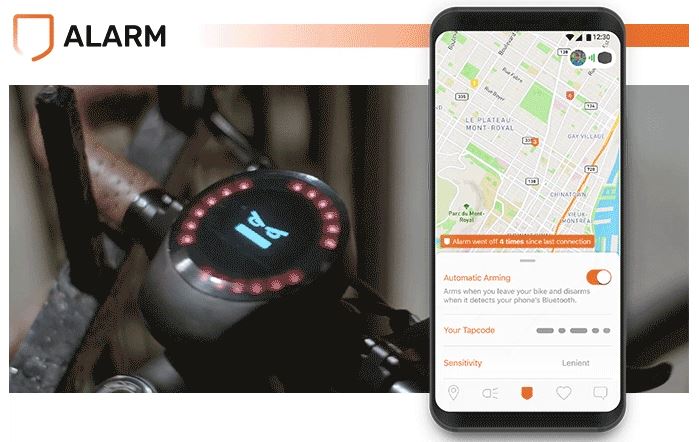 While you’re biking along, measured metrics include distance, speed, elevation, calories, time, and CO2 saved. Those are tracked along with every bit of pedaling you do, and without any need to initiate or stop the SmartHalo 2 from counting. Once collected, it’s possible to share your rides through Apple Health, GoogleFit, Strava, and similar apps.

Navigating the display is also quite simple. Just swipe on the base of the SmartHalo 2, similar to swiping on a phone screen. This will allow you to move between the various metrics placed on the front of the display, and without having to interact with analogue buttons or memorize tap-patterns.

Modes & Ease of Use

One of the best things about the SmartHalo2 is actually one of the easiest to overlook. After you’ve spent some time using your bike, and you’ve parked it, you can use a parking reminder feature. That way, you’ll never have to forget where you’ve placed your bike. That’s not really the same as a low-jack because the parking reminder won’t update itself. After all, it doesn’t possess any GPS information. Though you can use GPX imports alongside the SmartHalo to import GPX into the app, as well as mark waypoints along your map. 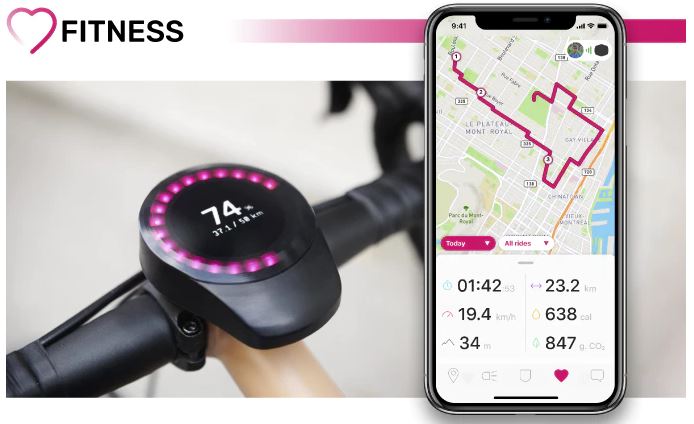 The SmartHalo 2 can be used to help you find new routes; or it can help you navigate better. It’s able to track metrics while displaying your cycling progress, and without you having to push buttons to do it. You can also sync between whatever fitness apps you’re already using to push your fitness data in in a timely an automatic manner.

As mentioned earlier, the display offers a couple of neat navigational features. More specifically, it’s possible to see which direction you’re supposed to head using a little turn-signal light that will appear in the upper right or upper left corners of the screen.

The fitness features inside this unit works similar to the fitness apps you’ll find in smartphones. For instance, if you’ve got a 30-mile ride ahead of you, the bottom of the display can be made to tell you about your progress. After 15-miles it can let you know that you’re currently at 15/30, and you don’t have to keep track of the small digits on the screen to check your progress.

In the fitness mode, the halo light which runs around the outside of the SmartHalo 2 will light-up in a circular fashion. When the circle is 25% lit, it means you’ve completed 25% of your trip. And that progress bar can gradually build as you keep moving forward, it’s actually pretty motivational. 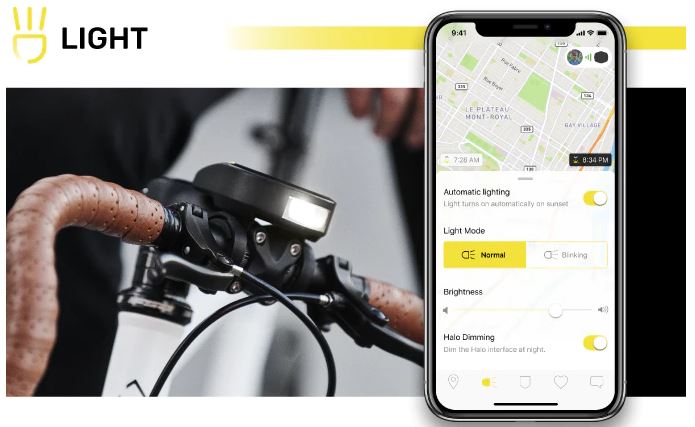 Another thing the SmartHalo 2 can provide is light. Similar to a smartphone, you’re able to turn on the light mode and squeeze about 250 lumens out of the device. That’s the equivalent of roughly a 20-watt incandescent bulb. So the brightness isn’t about to light up an entire room. But it is enough to help with keys, or to help motorists see you in the darkness.

The light on the original SmartHalo was pretty weak, but this one is roughly five times as bright. It also has a couple of different modes you can use, including blinking, pulse, and normal. For people who are worried about being visible to other people on the road, blinking and pulse can be pretty handy. Another thing to note is that the light will automatically shut down when you’re finished riding, so you don’t have to worry about forgetting it and coming back to a dead battery. 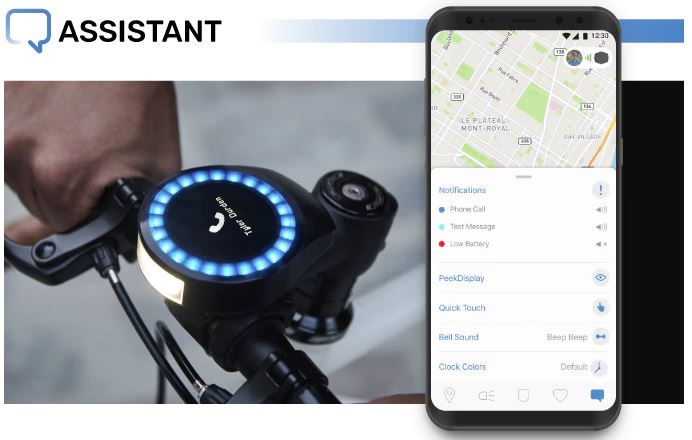 The assistant feature works pretty much like a smart-watch. It allows you to check the weather, interact with your smart-home devices, look ahead for road hazards, or otherwise stay informed about your trip. The assistant can also be connected alongside WeChat, Slack, WhatsApp, and similar messaging services. That way, your bike can alert you the next time you’re getting a text or a call from someone. It’s kind of like having caller ID on your bike.

For staying charged, the battery is supposed to be able to last for several weeks between trips. When it does come time for a charge, you’ll need to undock your device using the HaloKey and recharge it with a USB cable. It’s pretty much no more complicated than recharging a phone. 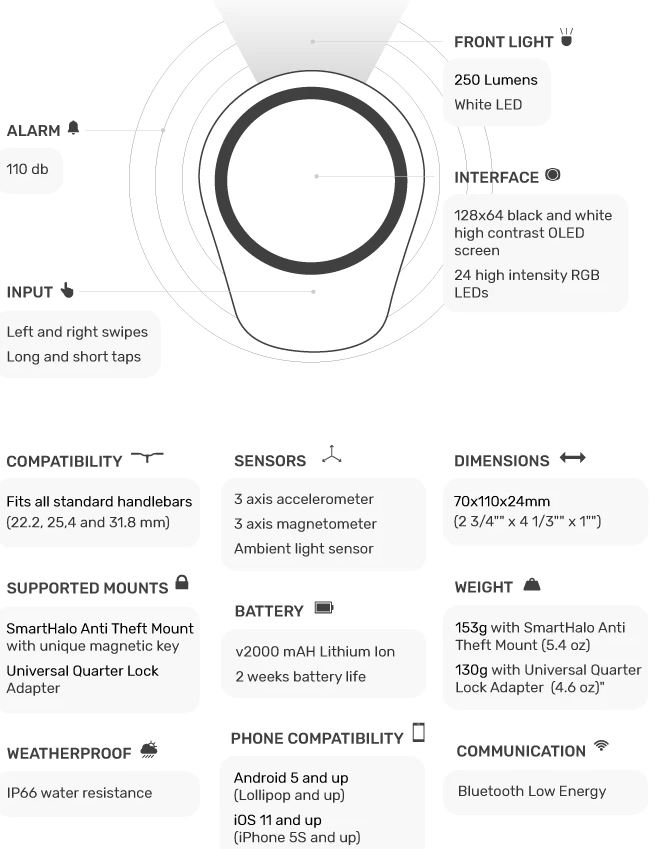 Who Should Choose the SmartHalo 2?

The SmartHalo 2 brings a lot to the table. It’s got a great degree of customization options. It’s got great support for Google maps. It’s got a much better light than the previous SmartHalo. Many of its best features are things you can still get using your current smartphone with a couple of fitness apps, but not all of them.

For people who spend a lot of time on their bike, the SmartHalo 2 can be pretty handy. It probably won’t change the way you use your bike, but it just might make your trips a little easier and more convenient. You might also find some new routes along the way.