There’s really no middle ground when it comes to mechanical keyboards. Most computer users still have never heard the term and may react with annoyance at the “incessant clacking” coming from the next room or office. At least that’s what our co-workers say.

However, it doesn’t take a very sophisticated typist to immediately feel the difference and get hooked. Though many don’t give a second thought to the budget, $10 keyboard that’s sat in front of them for years, one brief session typing on a quality keyboard with real mechanical switches can change your view forever.

Suddenly, the keyboard that was fine just a day ago now feels like typing on a slow, sludgy, cheap imposter. Once you feel the speed, accuracy, and satisfying snap of the keys on a mechanical board, nothing else will do.

Then, as if the first experience wasn’t convincing enough, you discover a whole host of different key switch varieties to choose from. The ability to choose the particular switch that suits your typing style and preference may have you studying switch charts or even purchasing multiple keyboards for different scenarios. Then the transformation is complete. You’re a keyboard elitist.

Whether you type frequently, play games, or just appreciate superior technology, a mechanical keyboard makes a dramatic difference to the way you interact with your PC. The MasterKeys MK750 Mechanical Gaming Keyboard demonstrates Cooler Master’s extensive experience and deep understanding of the features their customers look for in a quality keyboard. Let’s dive in and see if the MK750 presses your buttons. 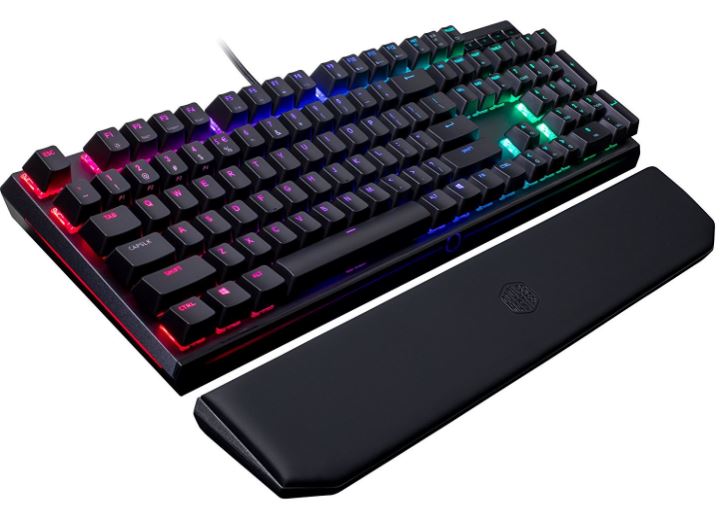 The Problem With Budget Keyboards

Before we look at the MK750 specifically, it’s important to ensure you understand what actually makes mechanical keyboards different.

While not uncommon in older computers, keyboards with mechanical switches were hard to find in the 1990s and earlier 2000s. Heavy and expensive, manufacturers ditched mechanical keyboards and substituted with cheaper rubber dome technology. Even today, the vast majority of keyboards use rubber domes.

Essentially, the plastic keycap rests on top of a dome shaped piece of rubber. When you press a key, the rubber dome collapses, allowing the switch to activate, then snaps back into position thereby raising the key.

It works, and it’s extremely inexpensive, however the soft squish of the rubber and the time required for the key to return to position cause a slow feeling often described as “muddy.” Now, if you’re a “hunt and peck” typist that only uses two fingers, you may never really notice the difference. However, if you have a high words-per-minute rate or you’re a gamer who frequently needs to press the same key in rapid succession, you’re certainly familiar with the effect.

Instead of the rubber domes, mechanical switches are true switches with metal springs. These switches actuate quickly and return to position rapidly, creating a fast, clean feeling as opposed to the “muddy” rubber domes.

Switch manufacturers also have a high degree of control over the particular behavior of their switches. You can choose switches based on actuation force required, actuation travel distance, or force profile. Some switches are “linear,” indicating they require a fairly steady amount of force that increases linearly as you press the switch lower. Others are “tactile,” meaning the required force increases and then drops off at a certain point, creating a palpable activation point that many typists prefer.

Though up for heated debate, the German company Cherry is generally considered the most prominent keyboard switch maker with their MX line of switches. These switches are identified by different colors, and the Cooler Master MasterKeys MK750 comes available in the most popular Cherry MX Red, Blue, and Brown varieties. 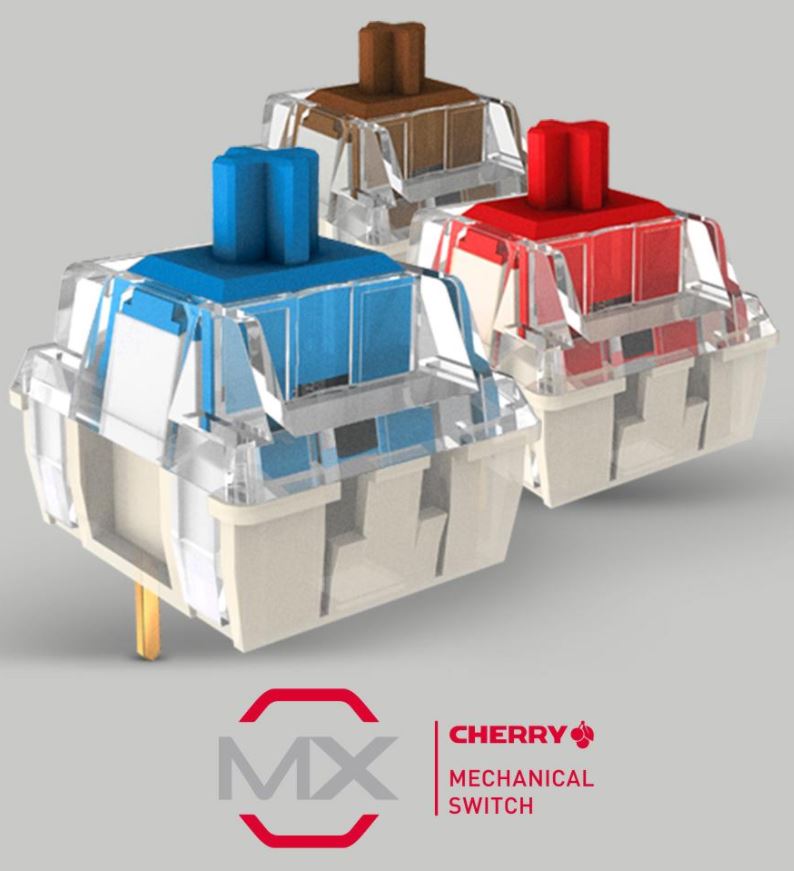 Cherry MX Red switches feature a linear profile with no tactile bump. They have an extremely light actuation force requiring only 45 centi-Newtons. These factors make them popular gaming keyboards since gamers often need to hit the same key in rapid succession.

Cherry MX Blue switches have a higher 50 cN actuation requirement, a very tactile bump with an audible click. This makes them less ideal for gaming but desirable for some typists who enjoy more feedback from the keys.

Cherry MX Brown switches represent a bit of a midpoint between the two. They have the same lighter 45 cN actuation force as the MX Reds, and although they do have a bit of a tactile bump, they lack the louder click of the MX Blues. This makes them ideal for typists who like some feedback but may also play games or use their keyboard around other people who don’t appreciate the loud clacking of the MX Blues. 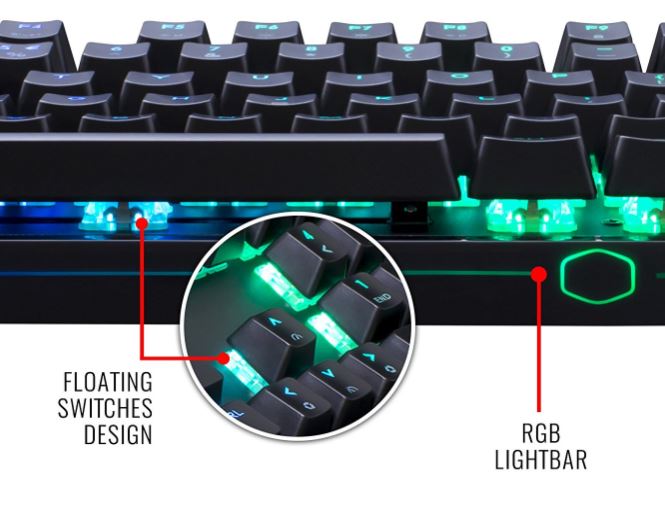 Now that you’ve had a crash course in mechanical switches, let’s look at the MK750.

Cooler Master uses a black on black design with etched plastic keycaps over an anodized cobalt-aluminum surface. While the design itself has a very clean, minimalistic look, Cooler Master allows you to make the MK750 your own through the use of customizable RGB lighting.

To enhance comfort, Cooler Master includes a detachable wrist rest. Unlike older or lesser models that use plastic clips, the MK750 features a premium magnetic latching system to ensure quick and secure attachment. The wrist rest has a comfortable, polyurethane leather covering.

A detachable, braided, 6-foot-long, USB type – C cable connects underneath the keyboard. This smart design ensures you won’t have to scrap your valuable keyboard simply because you run over a cable with your desk chair or a pet decides it needs to nibble on something.

While some keyboards eliminate the 10 – key pad on the right side to save space, the MK750 includes the standard full 10 – key pad and 4 dedicated media keys above. It doesn’t, however, include any dedicated programable macro keys, so it keeps a slim, standard size of 17.25 x 5.2 x 1.65 inches.

Like all mechanical keyboards, the extra hardware adds to the weight. While a typical rubber dome model may weigh just over 1 pound, the MK750 tips the scales at 2.2 pounds. Of course, once you place it on a desk or keyboard tray, you’re unlikely to give the weight a second thought. 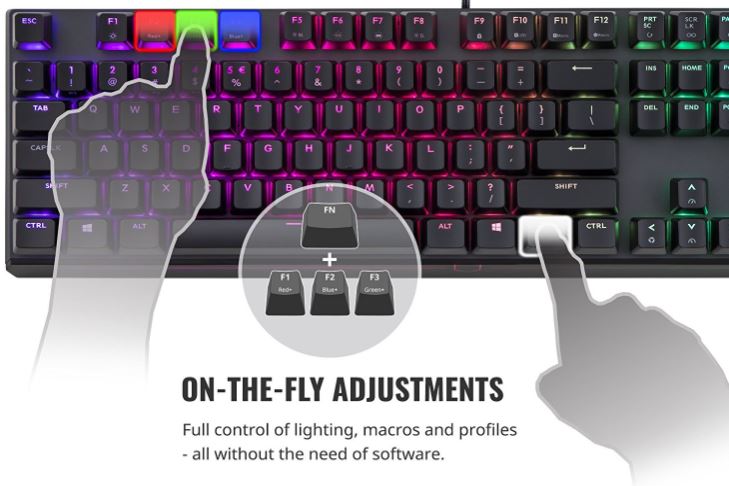 It’s hard not to notice the RGB lighting first. In case you’re unfamiliar, RGB lighting refers to the fact that the keyboard has red, green, and blue LED lights that you can customize. Some keyboards only allow you to set the color for the entire backlight, but Cooler Master ups the game with per-key RGB on the MK750 as well as an accent lightbar around the bottom and sides.

Per-key RGB enables host of impressive effects like Rainbow, Starburst, Ripple, and more. Additionally, you can customize up to 16.7 million colors on individual keys. You may want a certain color to match your computer or to highlight or accent particular keys you use most while gaming.

Aside from the colors, Cooler Master packs the MK750 with premium keyboard technology. A 32-bit ARM Cortex M3 CPU and 512KB of onboard RAM make up the brains behind the operation. A lighting fast polling rate of 1,000 Hertz means the MK750 will respond to your keystrokes within 1 millisecond. N-key plus 6-key rollover ensures that the keyboard will respond properly regardless of how many keys you strike at once.

While Cooler Master’s software provides you a tremendous degree of control, they know you can’t always leave a game to make the adjustments you’d like to make. That’s where the on-the-fly system steps in. With multi-media buttons, macro recording, and lighting adjustments available directly via the keyboard, you won’t have to miss any of the action to make sure the MK750 does exactly what you need it to do.

Judging mechanical keyboard performance can present a challenge. Since the MK750 uses common Cherry MX switches, the actual feel of typing on the keys should remain quite similar to any other keyboard using the same switches.

We tested the MK750 with MX Blue switches, and although we generally use the MX Browns in our keyboards, we’re very familiar with the different types. Typing provided an extremely satisfyingly, click-filled experience, to the chagrin of everyone in the area. Cooler Master’s keycaps felt solid to the touch with no wiggle or shake, and the wrist rest was very comfortable even during extended use.

The Cooler Master management software provided a great deal of configuration and control while remaining intuitive enough to use. We did appreciate the on-the-fly adjustments as jumping into the software for simple adjustments can prove slightly annoying.

The RGB lighting effects were smooth with adjustable brightness. Although you could easily turn the lighting into a gaudy show deserving of the Las Vegas strip, it’s also possible to choose subtle effects that provide backlighting while staying classy and understated.

No review would be complete without mentioning you can play the classic game Snake with the keyboard backlights. That’s a small but clever tip of the cap to the gaming community. 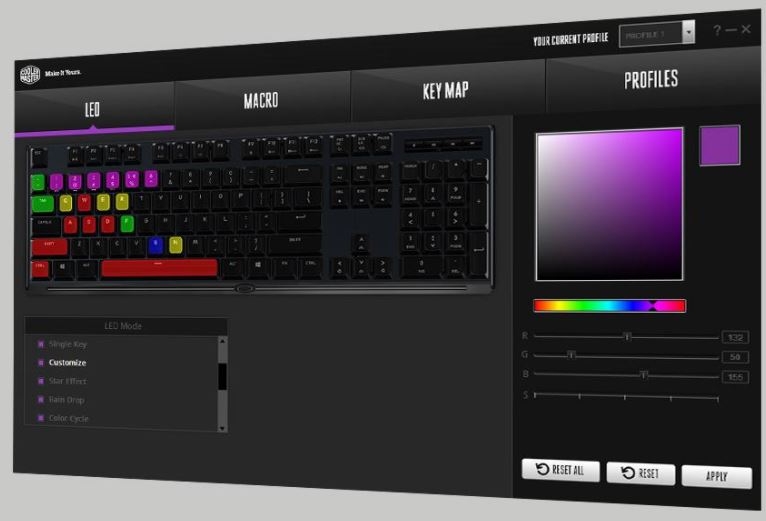 Whether you’re a typist or gamer, experiencing a mechanical keyboard for the first time will make a profound impact. Like many things in life, once you experience quality, it’s hard to return to the inferior item. While mechanical keyboards can get pricey, it’s certainly not as detrimental to your wallet as developing a taste for fine wine or cars.

Lately, many gaming peripheral manufacturers have been developing their own switches to avoid the costs and potential supply constraints from Cherry. While these may prove adequate, we appreciate Cooler Master’s decision to stick with the proven reliability that Cherry provides. Time has shown Cherry’s switches to be incredibly durable and reliable, rated to maintain performance up to 50 million keystrokes. With regular use, you’re unlikely to hit that mark before 40 years.

Cooler Master builds on Cherry’s tremendous quality with smart internals, sleek styling, and helpful software. Though there aren’t rows of additional specialized keys or other unique additions, we like the simple design. Just because you’re a gamer doesn’t mean you want your keyboard to look like it came out of a science fiction movie or a night club. As long as you don’t switch on the flashing light show, the MasterKeys MK750 would blend in seamlessly in any professional setting.