Trying to run HDMI cables over any significant distance can be pretty tedious. In order to not become tripping hazards, or horrible eyesores, those cables need to be tucked away somehow. Some people can avoid the problem with in-wall installations.

But with resolution standards on the rise, those people will have to worry about replacing their cables in the next five or ten years. That makes it less convenient in the long term, which is one of the reasons why so many people turn to wireless solutions.

However, running a wireless HDMI extender comes with its own challenges. If you can manage those challenges, then you can also get around all the trouble associated with running cables. It’s all a matter of having the right equipment for your own unique circumstances.

The Diamond VS50 is what could be called a barebones wireless HDMI USB extender kit. It’s supposed to provide you with everything necessary to run an elegant, portable, and fully wireless HDMI extension. Wireless is slightly misleading because you end up having to run a couple of short cables to power the sender and receiver, but the simplicity involved with this setup is hard to beat. 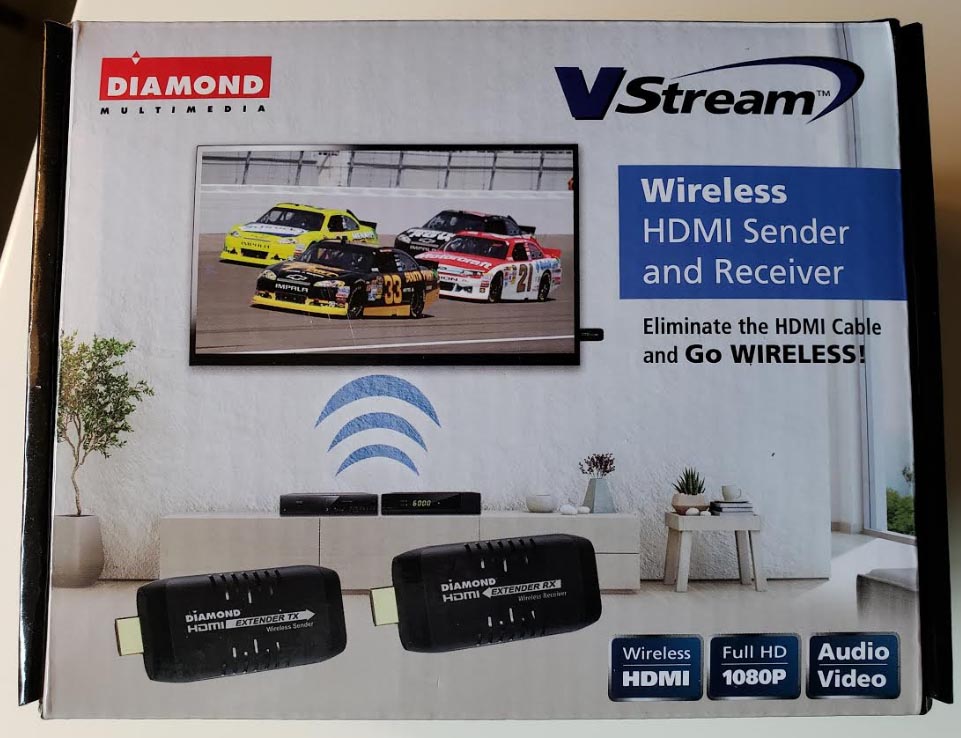 Like most tech products, it’s important to be able to match your expectations with reality. It can be tough to get a good read on the capabilities of hardware like the VS50 without personally handling it. But in terms of its capabilities, the VS50 is usually a pretty good choice for conference rooms and home entertainment settings.

It’s not something you’d want to try to use over great distances, which means it’s not necessarily the right equipment for outdoor settings. But outside of that, the VS50 does deliver what it promises. Though this unit has a slight emphasis on entertainment features, this kit actually has a number of crowd-pleasing features. 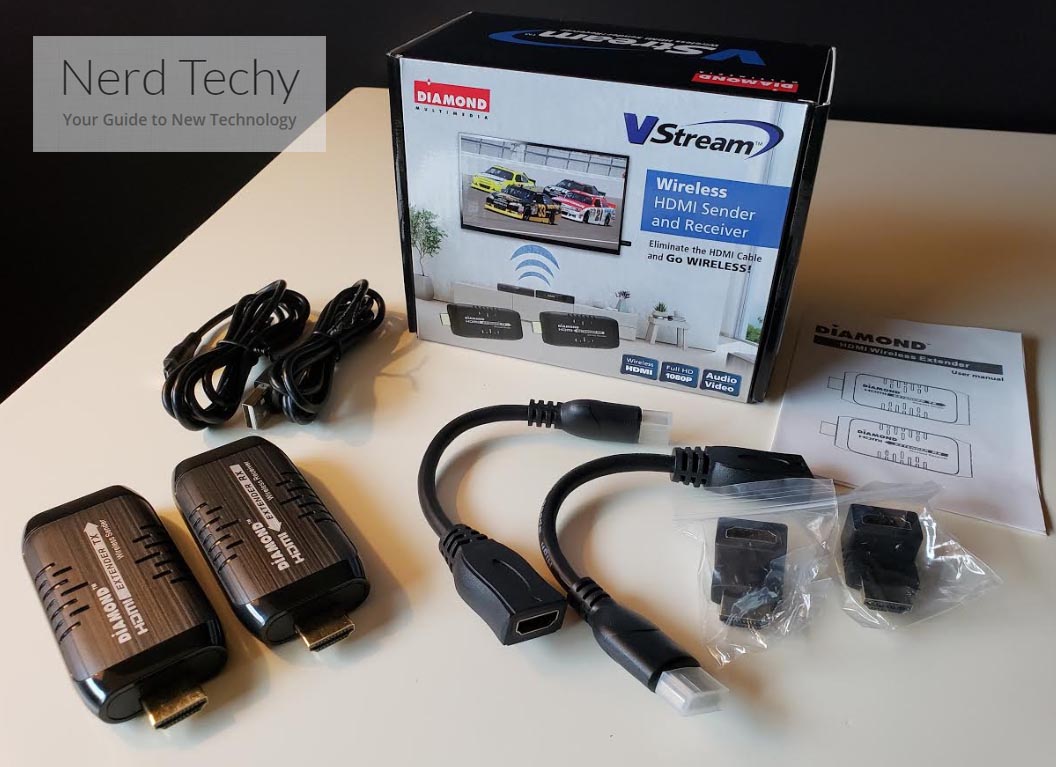 The VS50 includes a wireless receiver and a wireless sender. From one look, it’s hard to tell them apart. Physically speaking, they are basically clones of each other. Each measures roughly 3.1 x 0.9 x 0.5-inches, which is the standard dimensions of a USB thumb drive. While these units are slightly bulkier than a standard thumb drive, the difference is marginal at best.

Having them look so similar is slightly problematic. Using the same black chassis, and nearly an identical layout on their backside, it’s easy to get them mixed up. One of the only ways to tell them apart is a single word beneath their logo. The receiver as a wireless receiver, while the transmitter is marked as a wireless sender. 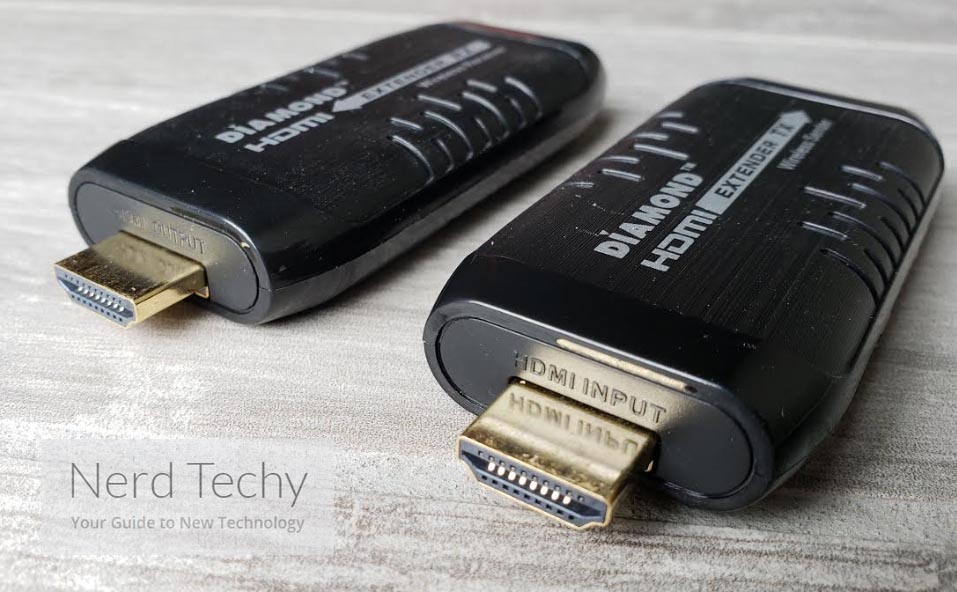 The text is small enough that some people may struggle to read it. With the passage of time, the text could easily wear away. It would’ve been more convenient if there was some kind of color coordination. Even if the sender/receiver labeling was written in a large font, that would’ve helped considerably.

But provided you don’t end up confusing the two units, thanks to the support of universal formats like HDMI and USB, this gear is literally plug and play. You don’t need to download any special software, app, or management tools. There isn’t even any form of Wi-Fi setup. You do have to take a moment to run a power cable to each unit, but beyond that, there’s no extra configuration involved. 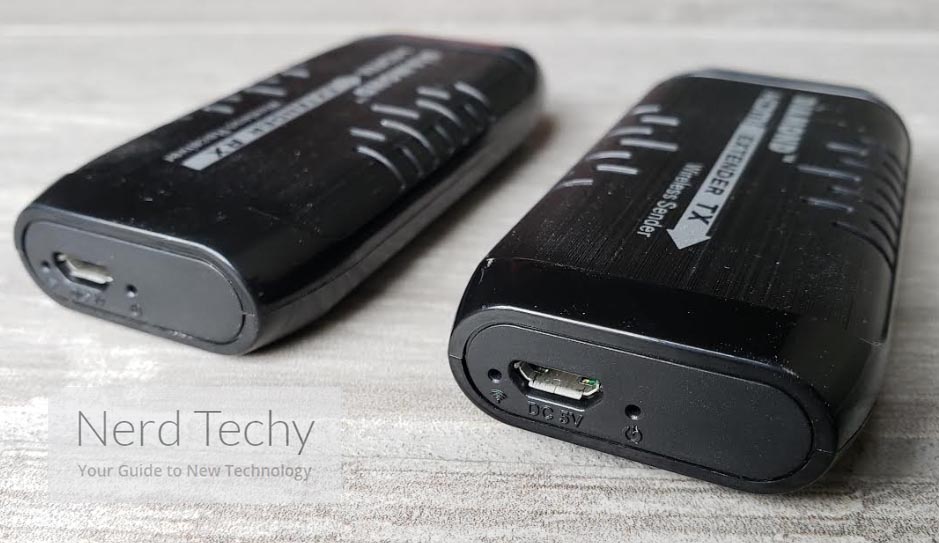 The VS50 supports HDMI 1.3 and is compatible with HDCP 1.2, which allows this kit to stream content which has been piracy protected. Because the signal involves an older version of the HDMI format, you’re not able to carry over features like 3D content through the signal.

But audio and video come through fine, which is all that most people care about anyway. Having a basic layer of universal compatibility ensures you’re able to wirelessly stream Hulu, Netflix, YouTube, and so forth. While the VS50 has a couple of these kinds of limitations, they’re generally only applicable to unusual cases. Not many people play 3D content, let alone would let that feature make-or-break their selection of a wireless extender kit. 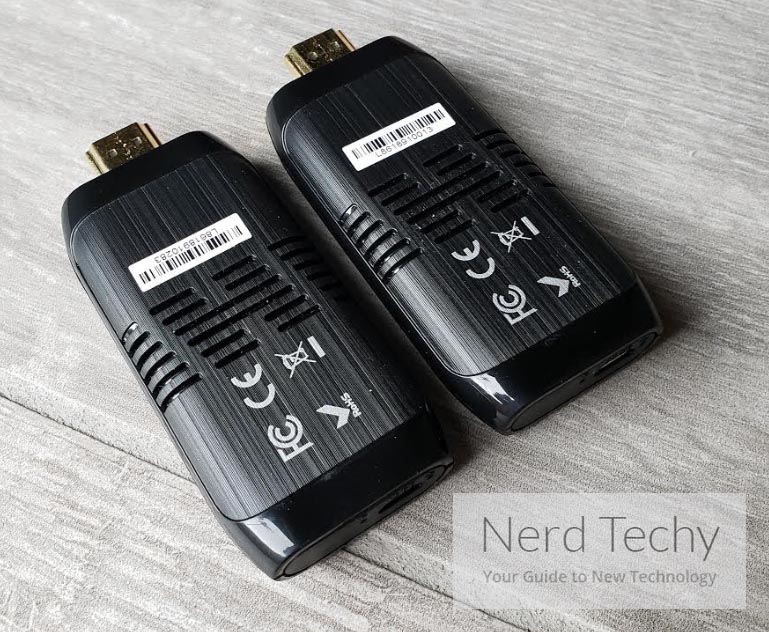 The Diamond VS50 allows you to move 1080p signals across a radius of about 30ft. That range assumes a clear line of sight between the sender and receiver. When you’re trying to move a signal from one room to another, or move it from one end of a room to another, 30ft is all that most people will need.

Greatly increasing beyond 30ft becomes expensive quickly because you need stronger antennas. But don’t be fooled by the fact this kit caps out at 30ft – this isn’t exactly entry level equipment. The connection is made without lag because it supports an anti-interference technology which requires the use of the 5 GHz band.

And the VS50 provides about the same level of adaptability as more elaborate HDMI extender kits. Much of that adaptability is possible with the included accessories, which we’ll get to in a moment. 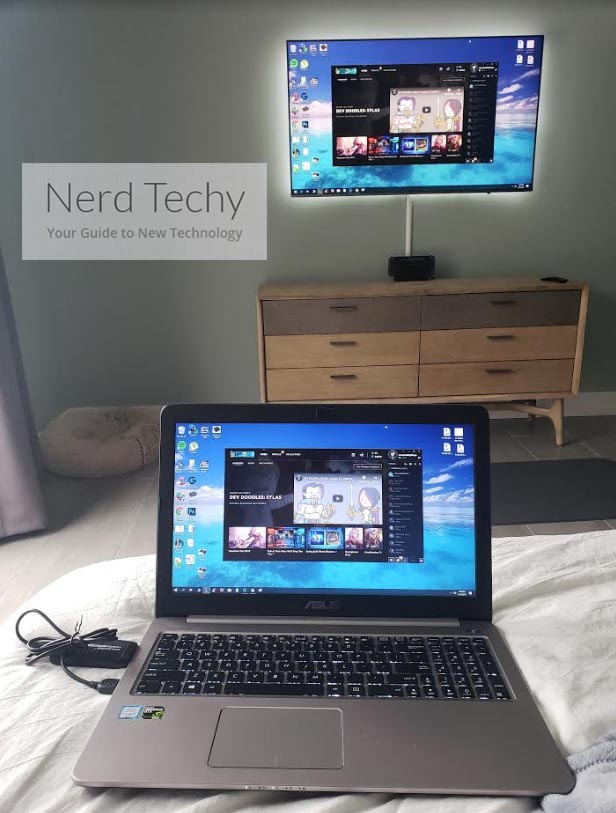 There are pros and cons to the transmitter using 5G. Because it’s using the infrared band, you don’t have to worry about encountering issues in environments with have lots of 2.4 GHz Wi-Fi signal traffic. It’s also much better at carrying very large amounts of data. When people start streaming 4K content wirelessly with extender kits similar to this one, those kits will certainly be using IR technology as well.

But there are downsides, too. The 5G band does not work like the 2.4 GHz Wi-Fi band. Your signals don’t bounce around very well. Rather, you need actual line of sight between the transmitter and receiver. Anytime more than a couple of trivial objects pass through the signal, you’ll find it won’t be able to maintain integrity.

With a 30ft signal like this, you may be able to pass through a thin wall, but you’re not going to have much signal strength left on the other side of the wall. It could easily chop 15ft off your total signal distance. People who end up in that circumstance can alleviate the problem by dropping their signal to 30fps, though that’s bound to be an unacceptable solution for gamers. 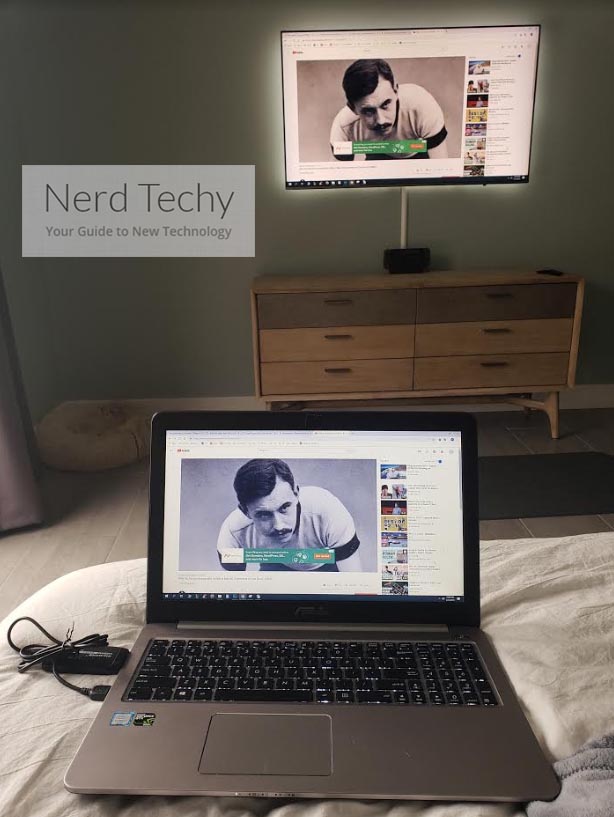 If you’re interested in playing gaming across a wireless connection, then you’re bound to wonder about latency. Fortunately, the VS50 is actually surprisingly good when it comes to that. The majority of HDMI transmitters provide signals which languish between 300ms and 500ms. Not everyone would consider that unplayable, but it would be universally recognized as slow.

The VS50 delivers latency which is slightly below 200ms. That is still high enough to where you probably wouldn’t want to play competitive games at a competitive level. Because though it’s scarcely perceptible, it’s perceptible enough to affect gameplay for certain types of gamers.

Especially when it comes to fast-paced action games, where you need to be responding to the screen within a fraction of a second. For casual players, or people who are playing slower paced content, it’s fair to say this wireless kit feels like it runs pretty smoothly.

However, if you’re using a sensationally large television, and the HDMI ports happen to be positioned towards the center of the screen, you’re out of luck. These short 5” extension cables are not sufficient for moving the receiver away from the backside of the television and into line of sight. That being the case, you’d have to invest in a separate HDMI cable, probably one which runs about 12-inches, and then use that cable to help stretch the receiver into a better position.

That shouldn’t affect many people because it’s increasingly common to position HDMI ports near the edges of a display. And even if you do have to solve the problem getting a slightly longer HDMI cable to use as an extension cord should only set you back about $15, assuming you don’t have one laying around already. 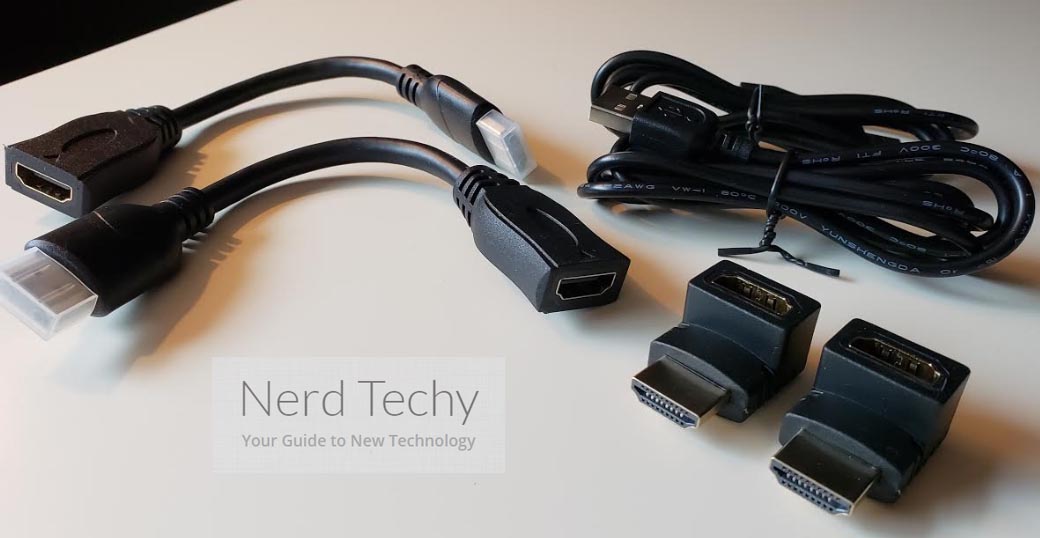 Diamond Multimedia provides a one-year warranty for their HDMI extender kit. They also provide American based tech support on a toll free number, which American tech support ready to help people who encounter issues. The VS50 is reasonably simple to setup, but it’s nice to know you’re covered if you do encounter a problem.

Who Should Choose the Diamond VS50 Wireless HDMI USB Extender Kit?

Extender kits which are aimed at smaller areas, like the VS50, tend to provide far less. The VS50 was built to broadcast about 30ft because that’s all that most people need. But it has the actual adaptability of equipment made to broadcast five times that distance. You can add on an HDMI extension cable to place the transmitter/receiver in a better position, or you can utilize the included right angle adapters to make the whole thing run smoothly. 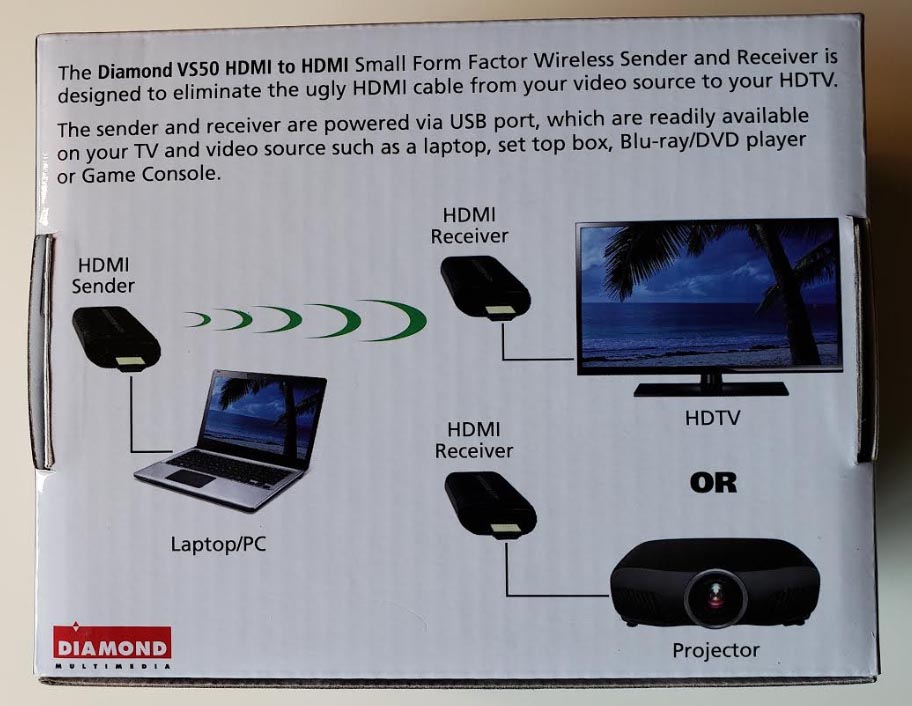 For wirelessly extending your screen, this adapter is suitable for most workspaces, conference rooms, classrooms, and offices. If you’re trying to move a signal through walls, you’re out of luck unless the wall is tremendously thin. For some people that means, finally, a reason to be thankful for having thin walls.

Small form factor almost speaks for itself. Both the transmitter and the receiver use a small form factor. They’re basically the size of a USB thumb drive. The plug and play nature of this kit makes it easy to use, and easy to take with you on the go. And that makes the VS50 Wireless HDMI USB Powered Extender Kit is a good choice for someone who needs a portable kit that’s easy to setup, and can provide an effective signal for about 30ft.