How fast is too fast? When it comes to computing, that’s actually a pretty complicated question. Suffice to say, the speeds provided by next generation drives aren’t right for everyone. If you’re just using a PC to check your email and read the news, then you really don’t need to rush to upgrade from a traditional SATA SSD.

Who should be grabbing NVMe SSDs? Putting aside social status, and how it can be nice to have the latest and greatest stuff, there are a number of situations where it actually makes sense to run a PCIe SSD. It really hinges on the amount of data you are handling.

Technology is moving fast. If you talk to people who don’t know much about computers, you’ll find most people aren’t even aware that SATA SSDs have effectively replaced HHDs in many circumstances. Meanwhile, drives like the Lexar NM600 have begun to silently replace SATA SSDs.

Many people remain oblivious of this passage from one technology to another, and they’ll likely remain that way. How can that be? Well, it’s partially because the Lexar NM600 isn’t a huge leap. At least, when compared to the leap between using an HHD and SATA SSD.

The Lexar NM600 can read up to 2100 MB/s and write up to 1600MB/s. Head to head with a SATA SSD, that’s anywhere between three and five times faster. That kind of intense bandwidth was clearly designed to help elevate your experience dealing with large file transfer. But outside of encounters with large files, you’re not going to feel much of a difference in speed. At least, not in most circumstances. 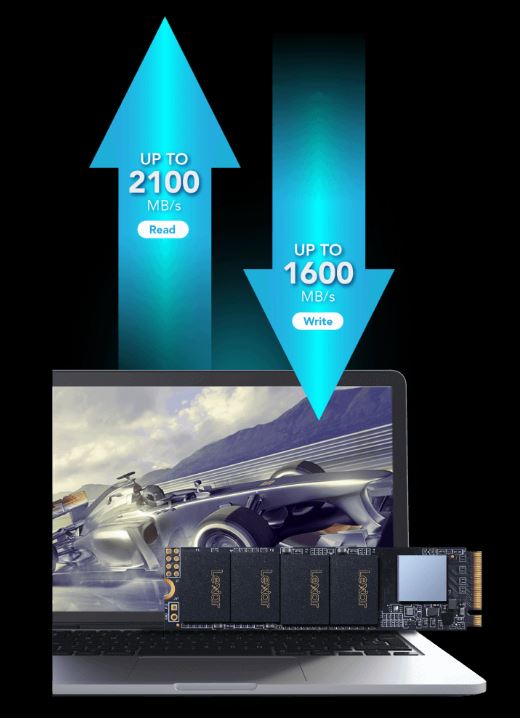 The card weighs about nine grams, which means its weight and dimensions are very similar to a stick of RAM. Sometimes RAM can be a little tricky to install, depending on the tightness of the case and the user’s dexterity. But the NM600 should really be no more difficult than the trickiest RAM installation.

Similar to a SATA SSD, the Lexar NM600 is built without any moving parts. It’s terrifically unlikely to fail. Even though early SATA SSD technology had a few issues where drives saw spotty survivability rates, NVMe drives are basically just SATA drives that make a connection through the PCIe interface. You don’t have to worry about your drives being likely to fail because SSDs are already a developed technology, it’s only the interface that’s really changed here. 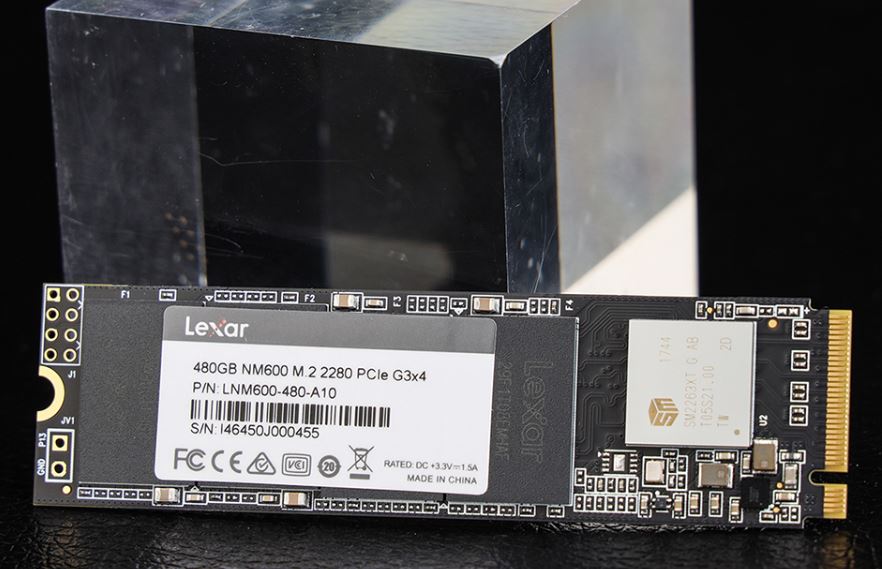 Speaking of longevity, the Lexar NM600 actually is resistant to shock and vibration, making it certainly one of the more robust drives NVMe drives out there. The shock resistance taps out around 1500G. Which basically means you shouldn’t drop this drive off a stairwell, or toss it into the air and watch it land on concrete. It’s much better prepared to resist the kind of small shocks it may experience inside of a PC case, or even a short tumble from hand to floor.

Lexar anticipates the longevity of this drive to be 1.5 million hours, which translates into a literal lifetime of operation. Of course, that’s just assuming you turn on the drive and read from it. When you’re doing lots of reading and writing, or when your case is running hot, you might find the actual lifespan of a drive like this to be closer to one decade.

Technically speaking, this drive can operate as high as 70°C, and as cool as freezing. But in the interests of longevity, you really don’t want to push your drive past 45°C if at all possible. When you start running your drive night and day, in extreme conditions, that’s when you’ll find the 1.5-million-hour estimate can actually be worn down to 10-years. 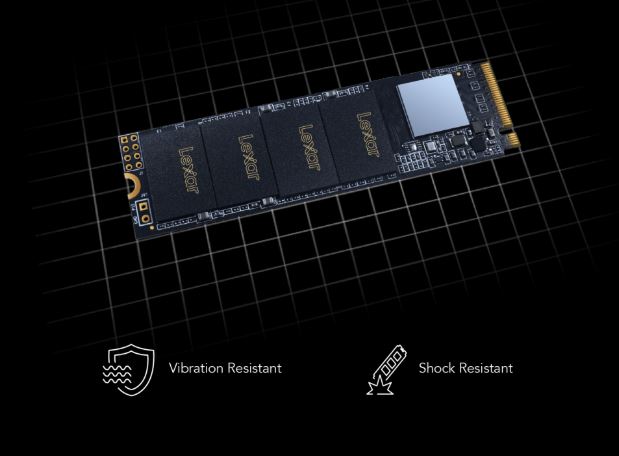 Like with SATA SSDs, when NVMe SSDs were first released, the costs were pretty silly. You could easily spend $6 per gigabyte. Fortunately, those costs ended up falling pretty quickly, and the same has been true for PCIe type drives. Before too long, they’ll cost the same as SATA drives, at which point it will be game-over for those devices.

When people started using SATA SSDs, one of the most visible benefits of the switch was operating system boot times. Naturally, when NVMe SSDs began to pick up traction, many people assumed that boot times would increase even further. That’s not necessarily the case.

In fact, anyone who already has a SATA SSD will find their boot times basically identical to the boot times provided by a drive like the Lexar NM600. Because when you’re using a SSD, the bottleneck on boot times is no longer how quickly your drive can feed information to the rest of your system. The bottleneck will exist in other components, or the software itself.

With that in mind, who should use a drive like this? Drives like the NM600 are suited for quickly accessing and writing huge quantities of data. Utilizing SATA based speeds, you’re pretty limited with respect to the kind of bandwidth you can access. When you move over to the NVMe PCIe interface, you’ve got essentially 3.5x the speed waiting for you.

For certain types of content creators, it’s possible to feel those differences in speed. For example, if you’re into video production, rendering a video might run smoother because you can read and write content much faster. 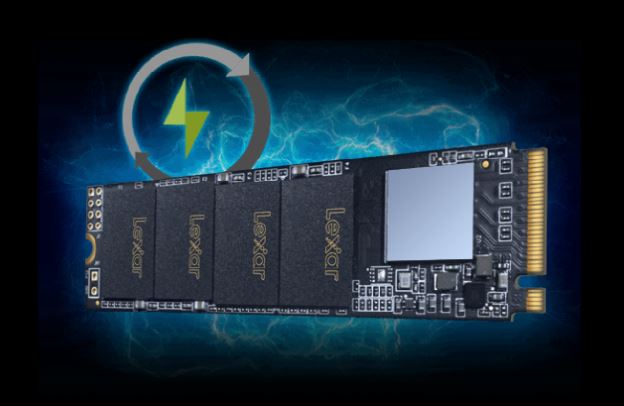 If you need far more than 2100 MB/s, it’s worth noting NVMe drives can get even faster than this. For instance, you’d want to check out the Sabrent Rocket NVMe SSD. It’s got about one third more raw power than this drive, but these drives are considerably more cost effective.

How about gaming? Some gamers don’t consider their hard drive to be a gaming device. And they’re not totally wrong, at least, for certain types of games. Because all your drive does is contain files that need to be loaded into memory for your game to play. Once you’ve got those files loaded into memory, it doesn’t matter if you’ve got a speedy hard drive or a slow one.

But that’s only after you’ve got those files loaded. What about before? That’s another story entirely, and that’s where you might find a couple good reasons to try using something like the NM600 M.2 2280 NVMe Solid State Drive.

Suppose you’re playing a battle royal game, and you want to load in before your opponents so you can get started sooner. Quicker on the ground, quicker to grab a weapon, quicker to get to where you want to be. Not every game has a loading-based advantage, but once you’re loading faster than everybody else, a couple of advantages can be found.

This drive also includes a free app, the Lexar SSD Dash app. It lets you view disinformation, including the temperature and interface of your drive. It can also estimate the lifespan left on your drive with the help of low density parity checking, and permanently erase all your data when you want to do a security wipe. Much of this involves operating the basic S.M.A.R.T scan function for health checkups, and other basic functions. 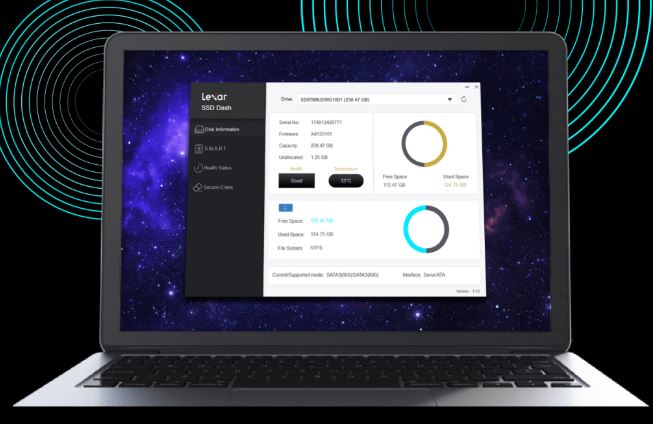 Nothing terribly innovative, and you can actually get many of those features from free software online. But if you don’t already have tools that can monitor your drives, getting them from Lexar is much easier, and for some people, certainly much safer than trying to get your own drive monitoring software from the internet.

Lexar includes a three-year warranty. As mentioned earlier, it’s pretty unlikely you’re going to need to use that warranty. Unlike HHDs, these drives have a failure rate that you’d need a microscope to see. But it’s nice to know you’re covered just in case something bad happens.

How many people really need this kind of power? Not that many. At least, not yet. To a large extent, these kinds of devices are still made for enthusiasts. Even as their pricing becomes more and more affordable, and even though they perform much better than SATA SSD drives, there won’t be a huge rush up towards drives like the Lexar NM600. Because basic SATA drives are still a bit cheaper, and for the purposes of most people, just as functional. 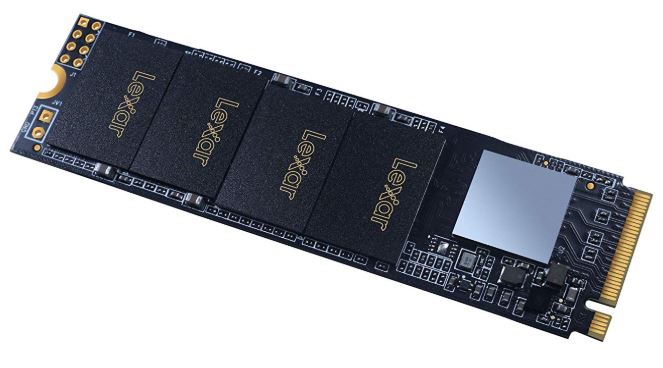 If you’re someone who was early to adopt 4K content, or you do professional media editing and have a reason to use a beast of a PC, then the NM600 might be a good choice. It’s got the power necessary to hurl around massive 4K media files as though they were smaller 720p content, and it’s got the ability to keep up with workstations that have powerhouse processors.

Not everyone should be rushing to adopt this technology. But the Lexar NM600 shows that these drives are getting cheap enough that sooner or later, they’ll replace SATA drives — without many people ever noticing. For someone who’s interested in getting ahead of the curve with a partially futureproofed drive, the NM600 is worth grabbing.