When new technologies are released, they tend to be pretty expensive. But over time, they do get more affordable. The earliest NVMe drives had consumers paying prices similar to the earliest SSDs, but costs are finally starting to level out. It will still be years until NVMe drives will make good choices for bulk storage, but you no longer have to be an enthusiast to be able to make practical use of an NVMe SSD.

Finding the right NVMe drive can be slightly more difficult than choosing an SSD or HHD. It mostly depends on if you’re trying to take advantage of a specific high-end features, if you have specific speed limits you’re trying to achieve, or if you’re just looking for a fast SSD.

The difference between ordinary SSDs and NVMe SSDs really comes down to speed. NVMe drives are capable of taking advantage of speeds that put ordinary SSDs to shame. The Sabrent Rocket NVMe PCIe Internal SSD is a new line Rocket SSD, intended to directly compete with Samsung. Though far more affordable than Samsung’s Pro series, that affordability won’t cost you in performance features.

The Sabrent Rocket NVMe PCIe Internal SSD comes in two varieties, the 256GB version and the 512GB version. Neither version is really more economical than the other. In either case, you get something like four gigabytes per dollar, which is actually pretty good. It certainly shows the price of NVMe drives has come down quickly.

Of course, SSDs can have their own issues. Not only when it comes to compatibility issues, but with sudden hardware death. Even highly respectable brands like Corsair have released several SSDs with serious issues or enormously high failure rates. Consequently, it’s always worth investigating failure rates specifically. If the information isn’t available, you can often gauge it from user reviews.

It can be important to read SSD reviews in context. SSDs typically have a failure rate between 1% and 3%. In other words, for every 100 people who buy a drive, at least one or two are going to get a dud. Understandably upset, those people will nearly always rush to leave a 1-star review, proclaiming their drive failed.

In other words, the only thing more certain than failure will be user reviews mentioning failure. But what you really need to be concerned with is how high the failure rate is, and also what you can do if you get unlucky. The failure rate for the Sabrent Rocket NVMe PCIe Internal SSD seems just below average. But for any new product that hasn’t seen a year of sales, it can be tough to be certain. 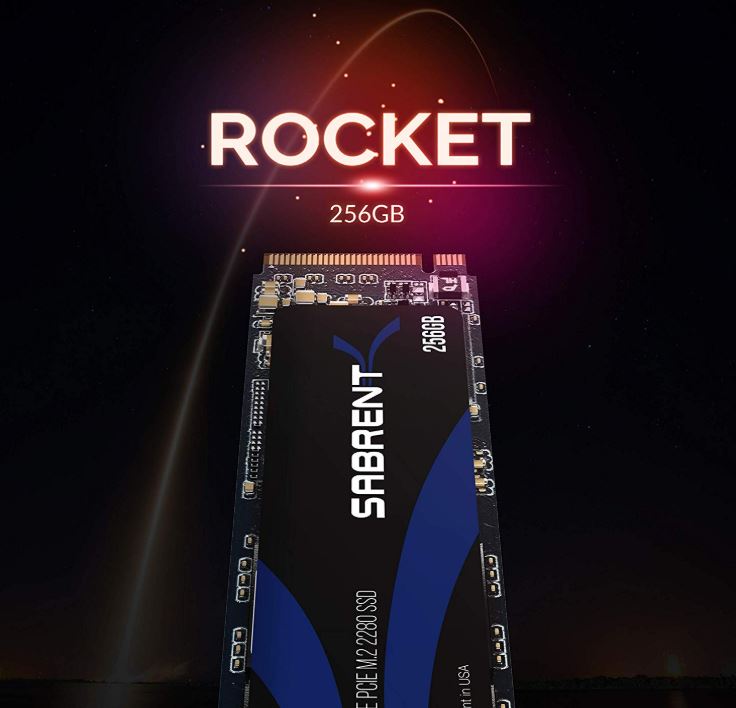 They have about the same dimensions as a stick of RAM, measuring 0.8 x 2.8 x 0.6-inches, and weighing less than a single ounce. Physically speaking, the drive actually looks like a stick of RAM as well.

Both versions of the Sabrent Rocket NVMe PCIe Internal SSD are based on Toshiba’s NAND flash memory. Each drive meets the specifications of the 2080 form factor, which means you’ll be able to pop either drive into external casing with little effort.

The Sabrent logo is largely printed across a cooling plate, which covers the majority of the drive. It doesn’t exactly make these drives look attractive, but it at least partially disguises the bare chipboard you would otherwise be staring at. And the cooling plate is actually pretty effective at keeping your drive in the right temperature range, at least provided it has appropriate airflow.

Though they may be branded as Sabrent drives, these drives are actually based on Toshiba’s NAND flash memory. Which is also why these drives can offer performance capabilities that compare with the major brands. The Rocket NVMe PCIe Internal SSD can read at 3450Mb/s, and have an equally impressive write speed of 3000MB/s. True to its name, those speeds really do move your files around like a rocket.

For the sake of comparison, a fairly standard HHD will have a read and write speed in the neighborhood of 300MB/s. A fairly standard SATA SSD will have read and write speeds around 600 MB/s. The leap in speed is pretty easy to spot. While a basic SATA SSD is about three or four times faster than an old HHD, the Sabrent Rocket NVMe PCIe Internal SSD is about ten times greater.

According to Sabrent, the read/write of the 256GB is 3090/1050 and the 512GB is 3400/2000. This very slight difference will likely be hard to distinguish for most users – both rated speeds are quite impressive. 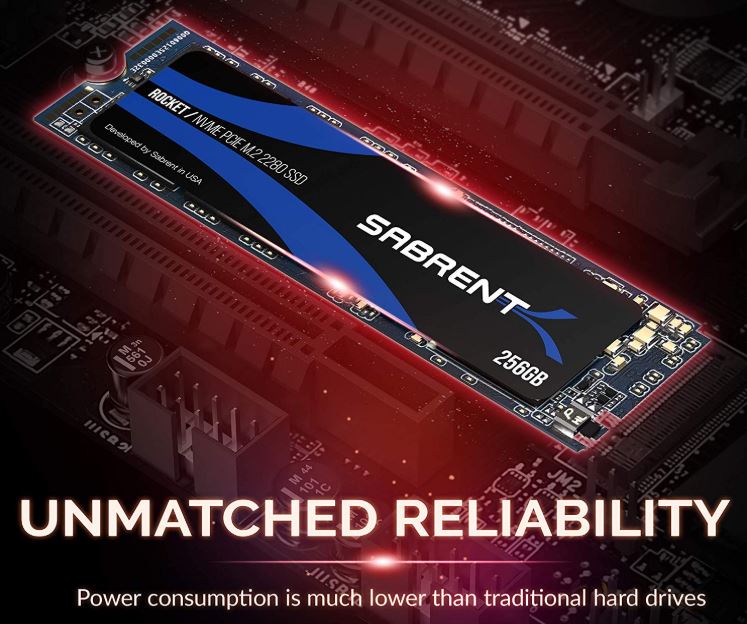 The majority of the performance benefits to be found from NVMe PCIe drives only exist when you’re dealing with huge quantities of data. If your operating system is already on a SATA SSD, switching to a PCIe SSD isn’t going to speed up your boot times. That’s because the limiting factor isn’t your drive speed anymore, it’s essentially the software itself.

Think about it for a moment. What would be the difference between a drive that could read/write at 500,000 MB/s, and a drive that was twice as fast? For the purposes of most people in most circumstances, there would be no difference at all. Their system could blaze along with a read/write speed of around 1,000 MB/s without issues.

If you’re heading to 3,000 MB/s, it should be because you need to handle extremely large files, or you care about small load times. The Sabrent Rocket NVMe PCIe Internal SSD is great for streaming 4K or 8K media because it can handle that kind of bandwidth without breaking a sweat. Similarly, it’s great for recording high resolution files without choking your system in the process. 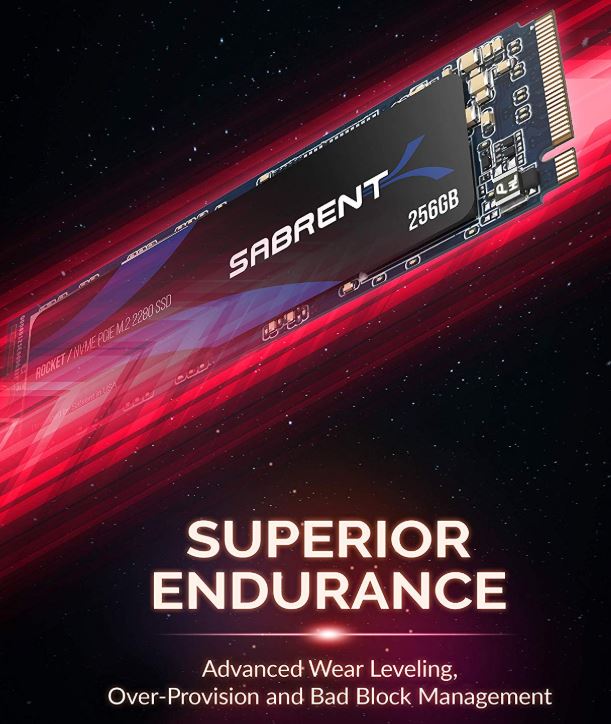 Many people do not consider using an SSD important for gaming. Because once your game files are loaded into memory, your hard drive really does very little for gaming performance. Close to nothing.

But your game files do have to be loaded into memory. That translates into load times. Though using a fast drive like the Sabrent Rocket NVMe PCIe Internal SSD would be totally useless in many circumstances, there are plenty of examples where gamers really can take advantage of these speeds.

Apart from their basic storage capacity, both versions of the Sabrent Rocket NVMe PCIe Internal SSD share essentially all the same features. They’re PCI-e 3.1 compliant and NVMe 1.3 compliant. They use the same power management options to keep down the power consumption of your system. And they support advanced trim and smart commands, as well as onfi 2.3, onfi 3.0, onfi 3.2, and onfi 4.0.

If you’re not already familiar with these features, there’s no need for a terribly detailed introduction. They’re essentially present to help to keep your drives running smoothly, and helping to ensure you don’t encounter any compatibility issues.

Sabrent Rocket NVMe PCIe Internal SSD provides over-provision protection, bad block management, and wear-leveling features. It’s really just a bunch of hangover features pulled from Toshiba’s hardware, but this collection gives you all the essential things you need to keep your drive running smoothly. And with as much or as little micromanagement involved as you’d like. 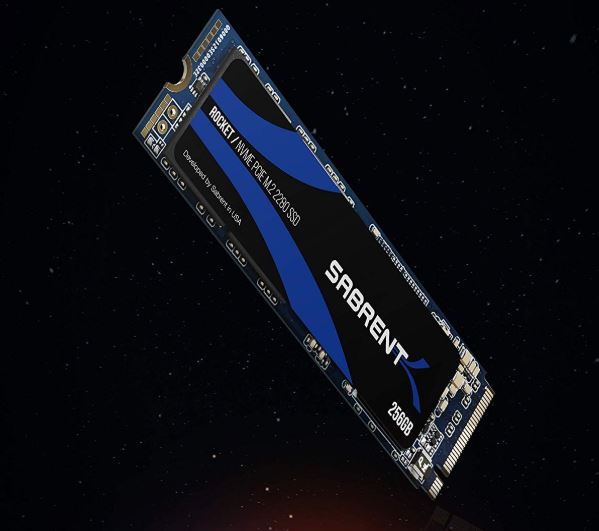 When you’re choosing a HHD, it can be important to be skeptical about the brand you go with. It’s often worth spending an extra $20 or $30 to get something from the bigger brands. When you’re choosing an SSD, it’s a good idea to make sure the brand is at least as respectable as Sabrent, but you don’t have to be quite as cautious because SSDs have comparatively low rates of failure. If you receive your drive and it turns on once, it’s extremely unlikely you’ll face further issues in the future.

Although this isn’t an OEM part, it certainly does feel like it. When you open the package, you’ll find it only contains the drive itself. You don’t get any extra mounting equipment, screws, connection cables, or even stickers.

It may also be worth noting that Sabrent makes a variety of hard drive enclosures that are suitable to a drive like the Rocket NVMe PCIe Internal SSD. Though few people will find it necessary to use an enclosure for their internal SSD, it’s always worth knowing the option is present.

Who Should Choose the Sabrent Rocket?

The Sabrent Rocket NVMe PCIe Internal SSD has a professional presentation. It’s not lit-up with LEDs or otherwise dressed to impress. But the hardware speaks for itself. Read and write speeds in excess of 3,000 MB/s make this drive about six times as fast as most SATA SSDs.

When you’re trying to move a 4K movie from one device to another, you might find the size of that movie to be in excess of 50GB. With the speed of a regular SATA SSD, it can feel like traveling back to 1995 and using a fax machine. It can feel like you’re using a regular HHD again. It just becomes terribly slow, which is why people who can actually use these speeds should absolutely take advantage of them.

The 256GB version is a good choice for someone looking for a basic boot drive, or a smaller storage drive for launching games. Though 256GB means you won’t be running much more than your operating system and a couple of programs, it’s an excellent way to take advantage of NVMe PCIe Internal SSD speeds without having to make a big investment.

The 512GB version offers more storage space, making it more suitable for storing UHD content and similar large files. It provides more breathing room than a smaller 256GB boot drive, and you don’t pay a premium for it. Provided you can actually make use of the speed, either of the Sabrent Rocket NVMe PCIe Internal SSDs could be a worthy upgrade.