While money may make the world go around, as the saying goes, these days data comes in a close second.

With the rapid rise of cloud storage technology, many people have lost track of the fact that ultimately data needs to reside on a physical device. “The Cloud” seems like some mysterious futuristic technology, but at the end of the day it’s really just someone else’s server. Whether you store data on your own devices or someone else’s, it all ends up on a hard drive.

As cloud storage costs drop, more users and business have moved to abandon local, physical backups for the cloud, but there are still countless reasons to have local storage. Whether you’re concerned about speed of data access, security, disaster recovery, or any number of other issues, it’s extremely important to have a local, physical copy of your data even if you also utilize cloud storage.

The Drobo 5N2 Platinum Edition Network Attached Storage array brings an impressive number of advanced data storage features to the home or small office user. While larger businesses have big budgets and IT staff, home and small business users need a solution to store data without the complexity or expense of some corporate solutions. Let’s explore what this feature-packed black box has to offer. 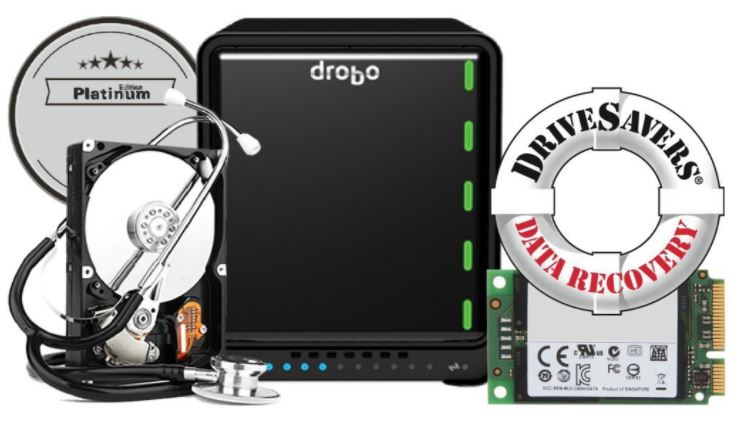 What Makes a Backup Secure?

First, we need to establish what makes a backup secure. The term “backup” gets applied to everything from an old burned CD shoved in drawer to a complex, hot-swappable, fully-redundant, geographically separated storage array.

First, there’s very rarely a “perfect” backup solution. Whether you’re securing personal photos or mission critical business data, you need to decide your risk and downtime tolerance and balance that with the cost of each solution.

For example, a home user utilizing a cloud-based solution may feel confident in the company they’ve selected and comfortable with a downtime of multiple days or weeks in the event of a crash. This same solution could be completely unacceptable to a business which could lose exorbitant amounts of money daily.

Here’s what it boils down to. An acceptable backup solution places your data on more than one physical device in more than one geographic location, and it allows you to retrieve that data in an amount of downtime tolerable to your situation.

Many users overlook the need for separate physical locations and keep backups at the same home or office where the primary data resides. This makes it especially vulnerable to fire, flood, theft, or other catastrophic events. 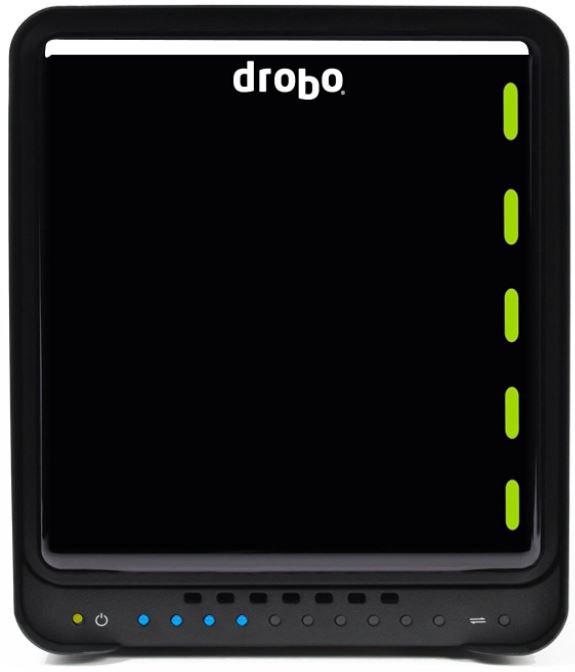 The Drobo 5N2 has a minimalistic, technical look. This isn’t a device designed to sit on your coffee table and attract attention but get tucked away in a back room or server closet and rarely accessed. Still, the black, toaster-sized box looks professional and has a host of informative LED lights. Green lights up the right side indicate which drive bays contain drives while capacity and status lights provide further info at a glance.

The 5N2 measures 5.9 x 7.3 x 10.3 inches and weighs 8.5 pounds before being populated with hard drives. Since the Drobo ships without drives, you’ll need to check specifics on the drives you intend to use to calculate a firm, final weight. On the rear of the unit you’ll find simply a power input, power button, and two Gigabit Ethernet ports.

Unlike some drive bays that require time-consuming mounting of the hard drives inside rails or sleds, Drobo uses extremely efficient carrier-less drive bays. Given the ease of drive changes, which we’ll cover next, this feature greatly helps anyone who plans to swap drives regularly.

Not visible externally, the Drobo 5N2 contains an internal battery backup system. While the battery capacity isn’t adequate to run the array for any significant time in the event of a power failure, it’s enough to write cached data to disk if an outage happens. This enterprise-grade feature protects key data from loss or corruption since disaster doesn’t wait for your data operations to complete successfully. 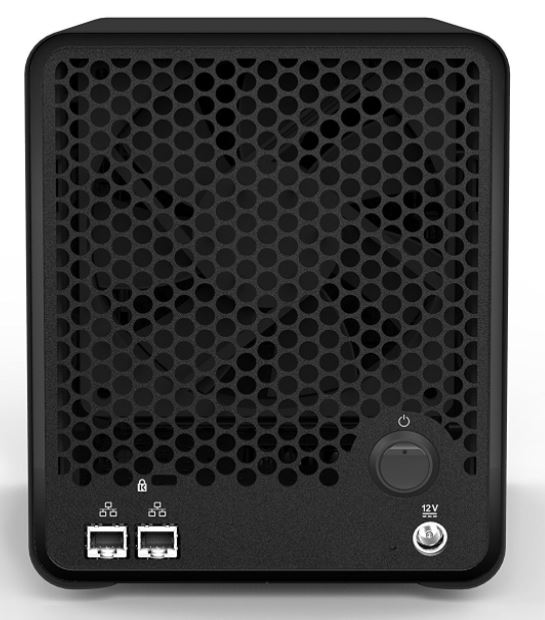 RAID stands for Redundant Array of Independent (or inexpensive) Disks. While most outside the IT field have little to no exposure to this technology, the basics aren’t hard to grasp.

Using multiple hard drives, a technology professional can enable different types of RAID configurations to achieve different purposes. Some RAID options duplicate data on multiple drives to protect against failure. Others split data into multiple parts on different drives to increase read and write speed. Some RAID levels consist of more complex combinations of both.

That’s where Drobo’s BeyondRAID comes into play. This award-winning technology makes setup, modification, and recovery unbelievably flexible and simple. First, you can load drives of any size and specification in the Drobo’s bays. Then, with the Drobo management software, you can enable single or dual-disk redundancy with a single click. If a drive does fail, Drobo will automatically attempt to self-heal by redistributing data to the remaining drives. If you need to expand the capacity of your array you can swap out your smallest drive for a larger one and have access to the increased capacity within seconds.

This level of flexibility is unheard of via the use of traditional RAID controllers and makes it easy for even less experienced users to feel like an IT pro. 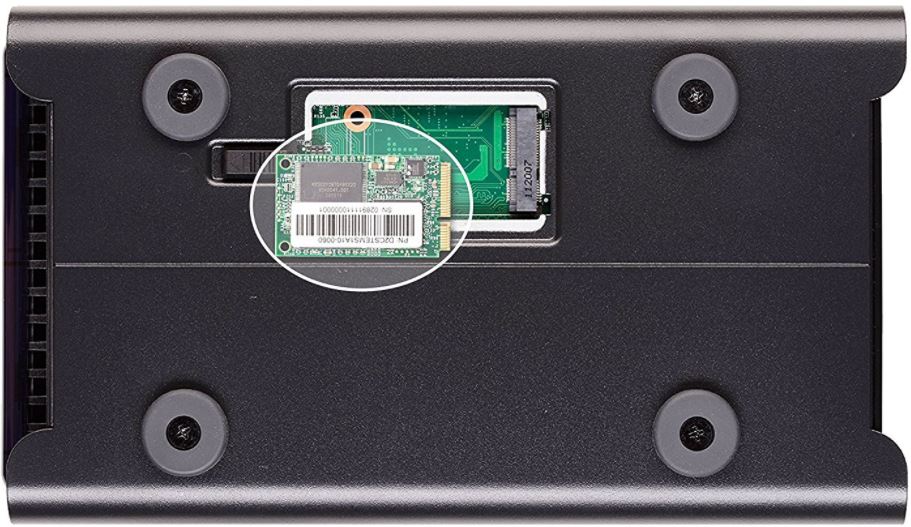 We found the Drobo software was a breeze to use. We loaded up the unit with 5 spare hard drives of different sizes. With a background in IT and experience configuring traditional RAID, BeyondRAID’s ease of use was nearly unbelievable.

Changing redundancy levels, creating Smart Volumes that automatically pull from a central pool of data, and upgrading disks, all on the fly, is something you just plain can’t do with standard RAID. The 5N2 is, by far, the most feature-rich and flexible NAS we’ve ever configured while remaining remarkably easy to use.

Performance proves challenging to measure since it depends highly on your selection of drives and BeyondRAID configuration. If you load every bay with enterprise-grade Solid State Drives and no redundancy, your performance numbers will far exceed someone who tosses in a bunch of low speed, energy efficient magnetic drives with dual redundancy.

Since network speed can limit performance, it’s nice to see dual Gigabit ethernet ports. You can bond these so they work together or even connect to separate routers for failover purposes. In our testing, we managed to get 80 – 120 MB/s reads and writes depending on the which tests and file sizes we ran.

The only way to avoid network bottlenecking would be the use of iSCSI which uses different transfer protocols to avoid the inherent performance penalties that result from standard network transfers. While Drobo includes iSCSI in their B810i product, unfortunately the 5N2 lacks this feature.

The 5N2 performs very well for a network storage device, but if you demand faster transfer performance you’ll need to look for a device with iSCSI. 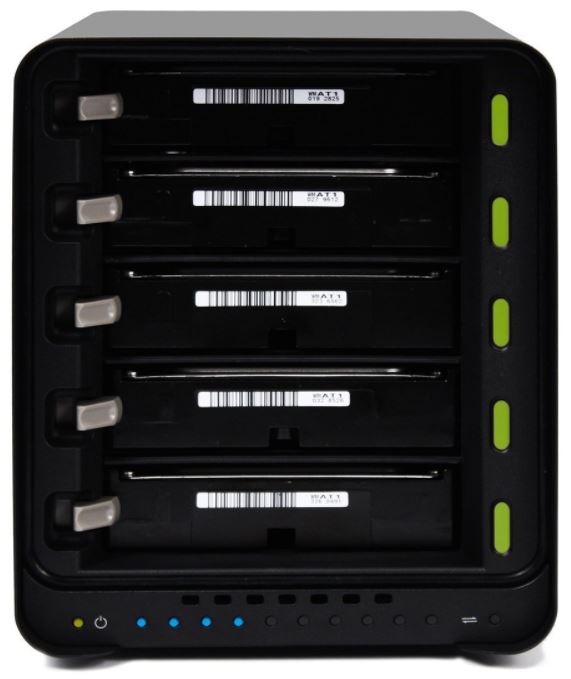 We began this review by explaining what makes a secure backup. We did this because many users, whether home or business, develop a false sense of security once they place data on a network or USB drive. While the Drobo 5N2 has a number of brilliant features to protect you from single or dual drive failure, it’s important to understand that it functions as a storage device and not a backup device.

If you keep the 5N2 in your office and have all PCs scripted to backup or store data on it, your office remains extremely vulnerable to fire, flood, theft, or other catastrophe. This isn’t some kind of deficiency in the Drobo. Every storage device, whether local or cloud, always ends with physical drives. If you don’t have copies of your data in two different geographic areas, you are not backed up.

Drobo recognizes this and included DroboDR software in the 5N2. By purchasing two 5N2s, you can easily configure seamless replication of your data to an offsite location. This provides a nearly bulletproof backup plan that also lets you get up and running extremely quickly in the event of any disaster.

The 5N2 Platinum Edition takes support one step further by including DriveSavers data recovery service for 5 years. If you don’t have your Drobo backed up and you lose more drives simultaneously than your redundancy level allows, DriveSavers is the leading data recovery lab in the nation. Typically recovery can cost many thousands of dollars from a multi-drive array, so this coverage could save you a lot of money down the road. 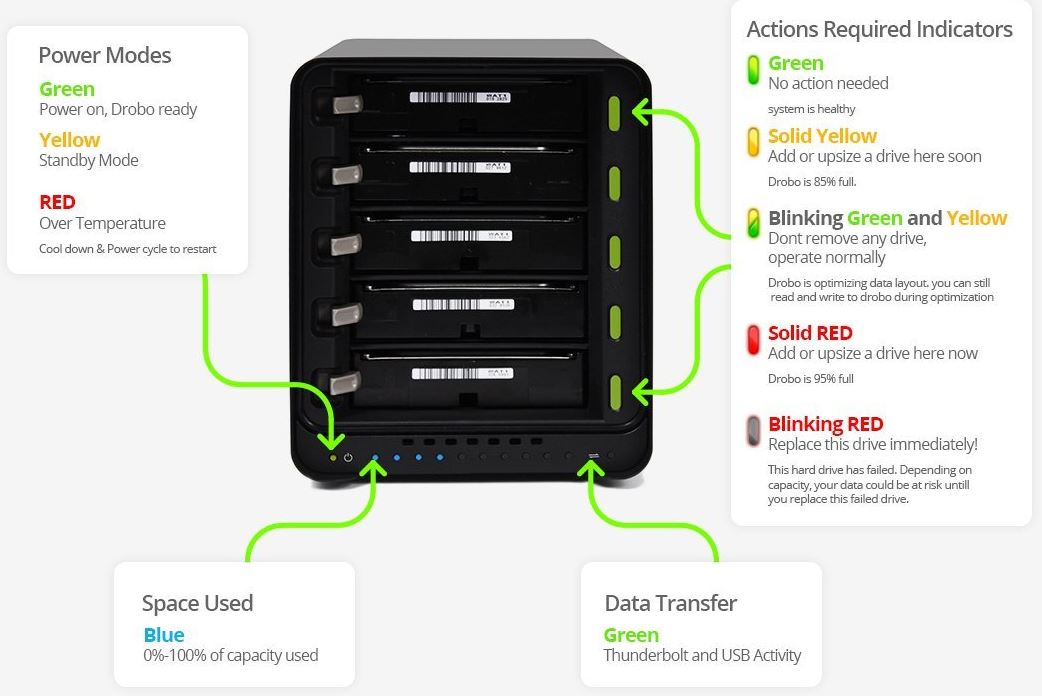 The Drobo 5N2 Platinum Edition is so much more than just a network attached storage device. While a basic NAS may get the job done, particularly if you have an IT department to support it, Drobo’s advanced software and BeyondRAID technology enable a degree of power and flexibility unmatched by lesser devices.

While these features remain compelling enough on their own, Drobo takes it to another level with DroboDR and other apps on the myDrobo platform. Instead of just a dumb storage destination, Drobo created a highly functional, easy to use ecosystem that allows astonishingly simple setup, remote access, backup, and recovery.

If you don’t have a technical background, the Drobo will have you feeling like an IT genius. If you’re already an IT genius, Drobo makes things so easy you’ll feel like you’re cheating. When it comes to IT, things are rarely simple, so it’s refreshing to find a device that does exactly what it’s supposed to do and much more while remaining accessible to users of all experience levels.

The Drobo 5N2 Platinum Edition sets the bar far above all other Network Attached Storage devices.