What does a router do? In simple terms, it broadcasts internet to all of your connected devices. But when Eero launched their first Mesh Router, our answer to this question changed.

Mesh networking became a trend in the home networking industry, and companies like Google and Linksys hopped on the bandwagon, releasing their own hardware.

For a while, Eero was no longer the best router on the market. Instead, they were one of a few different options, each of which provided the same service.

Their second generation hardware added a whole new layer of functionality, allowing the router to act more as your gatekeeper for your whole network. Which devices can access your network, how they access it, and how your bandwidth is distributed was all managed by a single piece of hardware. Today, we’ll be revisiting Eero’s networking platform by testing out their Eero Pro system. This is the highest end package they sell, designed to create a powerful network that can work even in the most challenging conditions. We went hands on to find out exactly what this router can do, and this guide will help you decide if this is a networking system that can improve your home network. 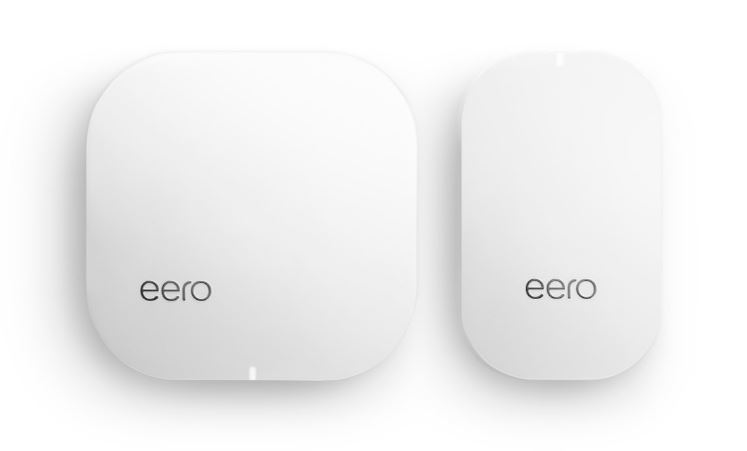 Currently, Eero has two modern products on the market. They’ve got the Eero itself – a tri-band mesh networking router with Ethernet ports, a processor, and an advanced quality of service system. They also have the beacon. The beacon comes with a built in night light, and is a little more compact than the Eero. But other than those two points, it’s much simpler than the full-size model, and only used as an expansion.

The Eero Pro WiFi System contains three Eeros, and is the most powerful system that Eero performs. If you live in an apartment, you might be able to get away with just a single unit. But by putting this model to the test, we’re able to find out the best of what Eero has to offer.

This is one of the most complete WiFi systems we’ve come across. It’s designed to completely replace your router and all of it’s extenders, increasing your single or dual point connection to a tri-band tri-point system. 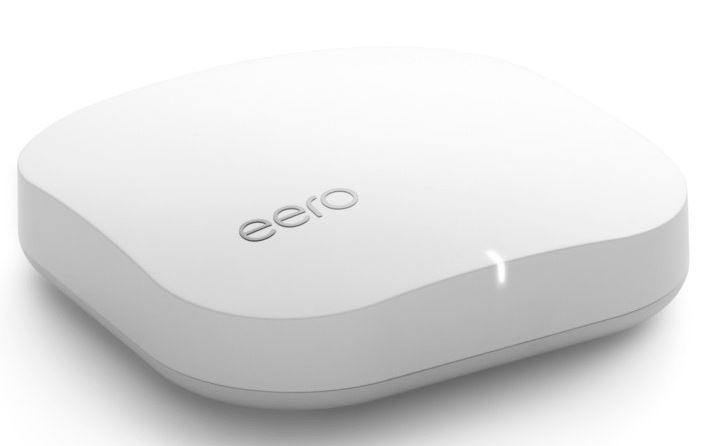 Being as this router promises so much more than your common system, it would make sense that the technology is unique in design. The most noteworthy feature is the dedicated backhaul line. We mentioned that this is a Tri-band router. Only two of those bands are consumer facing – the standard 2.4 and 5 Ghz channels used for 802.11ac. But the third band is 5.8 Ghz, something that isn’t commonly supported with consumer networking equipment. This is actually a huge advantage. Your Eero units are going to be the only things in your home using this channel. It covers a wide range, has a ton of bandwidth, and is rarely crowded.

This means that each device in your home will connect to the closest Eero as if it’s the first router in your system. And thanks to the backhaul channel, your wireless connection will be as if every single Eero unit in your home has it’s own dedicated hardwired line.

Before you can realize the benefits of the Eero system, you’ll first have to get it up and running. Fortunately, Eero has taken a great deal of care to ensure that the process is simple, straightforward, and easy for consumers to follow. 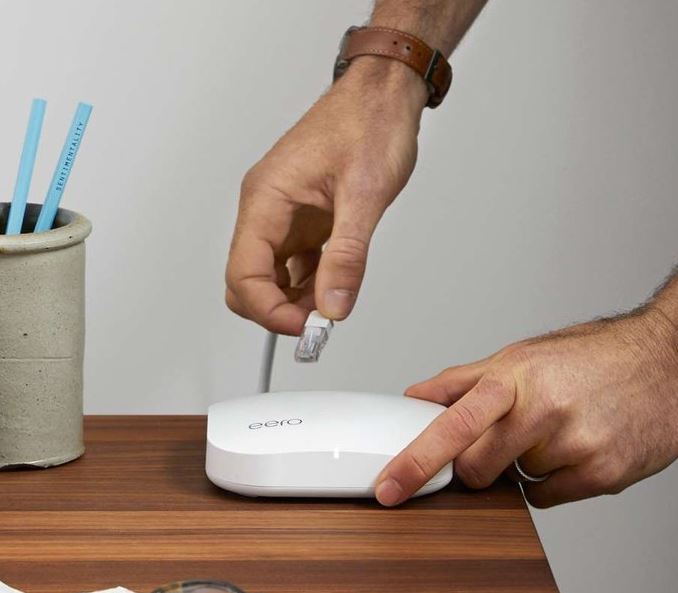 In order to get it up and running, you’ll first need to fire up your smartphone. After plugging in your first Eero to both a power outlet and your modem, your phone will connect to it via Bluetooth, and initiate the setup procedure.

The first questions you’re asked is about your home. You tell it how many square feet it is, how many stories, and select from a list of pre-configured layouts. This line of questioning is a first for whole-home WiFi systems, and helps Eero determine how your network should best be setup. 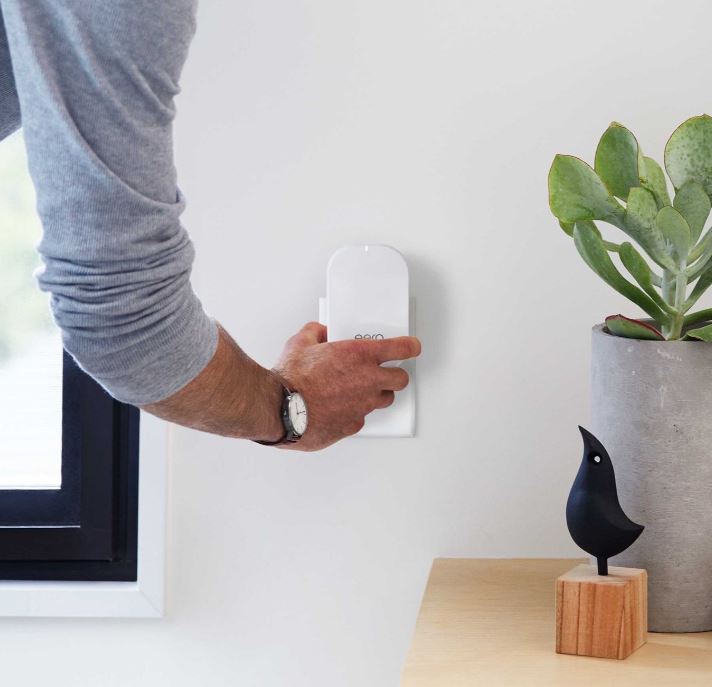 Once entering this information, selecting “next” causes your phone to look for your first Eero over the Bluetooth network. You can then answer a series of questions including your network name, and configure some initial access restrictions, should you desire.

After the first model is set up, the app will recommend the places you should install the other Eero modules. They are easy to mount, requiring only a flat surface. Table or wall, the choice is yours. You’re then greeted with confetti, and an announcement that enthusiastically reads, “Boom! Your network has been created”. 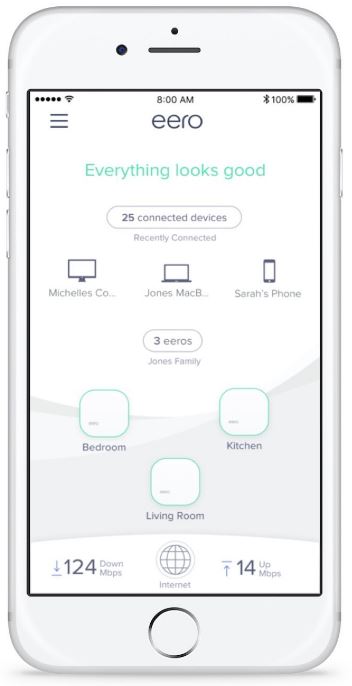 Once we got our network up and running, the next step was to see how it performs. There are two technologies that can improve both bandwidth, as well as coverage. Generally speaking, wireless routers are omnidirectional – they broadcast your network equally in all directions. But the Eero has beamforming. This is a number of directional antennas that can only broadcast in a specific direction. With power being distributed to the antennas equally, you’ll get the same coverage as an omnidirectional antenna. But when the entire family is playing on their phones in the living room, you’ve got a hotspot of data use. Beam forming can reduce power to antennas facing in unused directions, and improve the signal in fixed areas.

Up next, you’ve got MIMO technology. This stands for multiple input, multiple output. We’ve all encountered a scenario in the past where one person is downloading an entire season of their favorite TV show, which causes your ping time to make your online gaming session almost unplayable. With MIMO, this is a thing of the past. Each Eero module can have two separate WiFi networks running at the same time. If one gets bogged down, users are moved to the other. Across three modules, this is six separate connections. Technically there are nine connections, but three are reserved for communication between Eeros, keeping your backbone up and running.

How does it work in the real world? In a word, excellent! With 802.11ac enabled, we were able to hit speeds of up to a gigabit on WiFi. The router competently covered 4000 square feet of space, with virtually no dead zones or drop-offs to speak of. This might be overkill for some users, but if you’re looking for the ultimate in coverage than the Eero Pro may be for you. 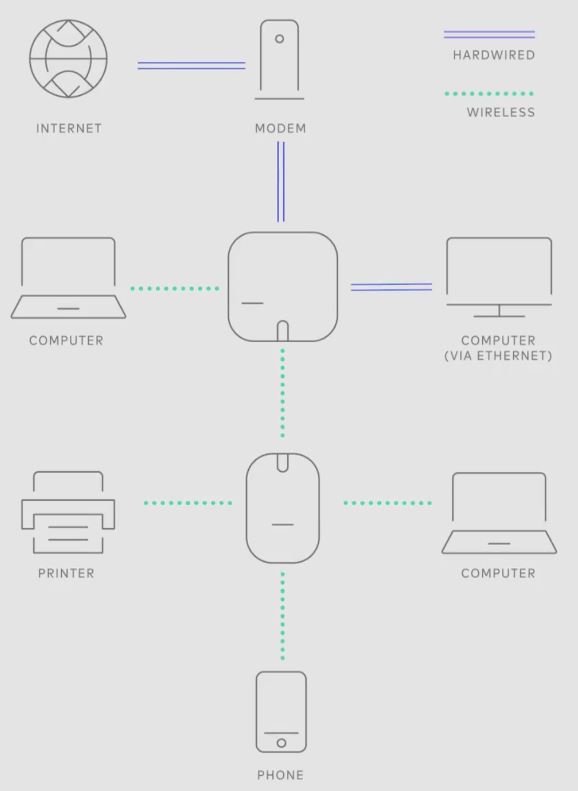 Beyond providing you with unparalleled internet access, there are a few other key features that help set this WiFi system apart from the pack. The first key advantage is security. Eero is designed to automatically detect security holes and patch them. Your Eero always has an internet connection, and all security updates are performed automatically, and in the background.

You also have a whole suite of privacy and parental control features. You can set up a separate guest network, allowing users who don’t have the password to access the internet, but with restrictions on how much bandwidth they can use, and what times they can access it. You can set device specific content filters, as well as time. This means that your kids won’t be up all night on their phones, and they won’t come across anything you don’t want them to see. 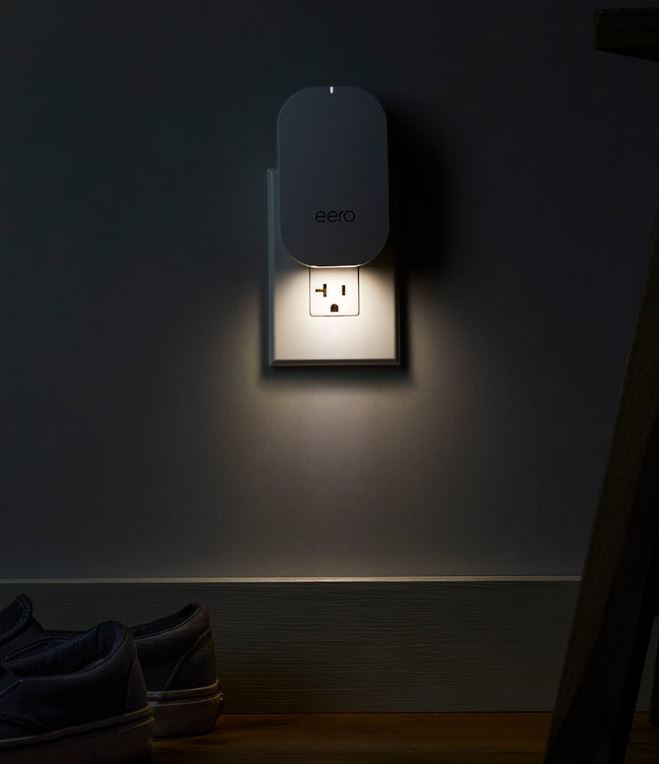 The Eero Pro is a powerful system, and covers a huge area. For many users, this will be overkill. If your home is less than 3 bedrooms, or less than 2500 square feet, we’d instead recommend that you go with a smaller system. Unfortunately, when you’re only buying one or two Eero modules, you don’t get as good of a deal. For now, those of us with massive square footage to cover can get pretty good bang for your buck. But if you have a smaller home, you’ll have to swallow a higher per-unit cost if you want the same advanced features offered by one or two Eero devices. 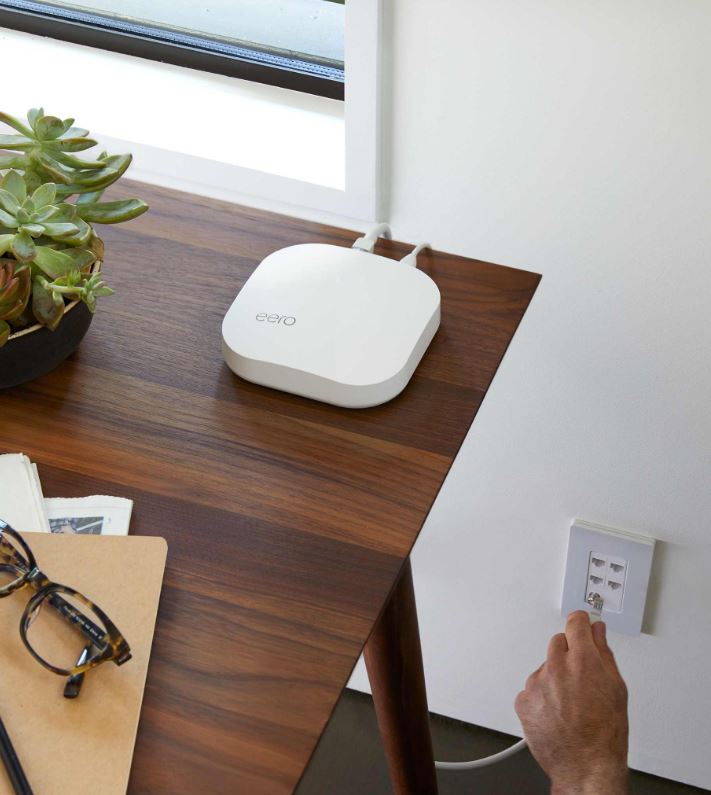 If you’re struggling to get the coverage you need in a larger home, a whole-home WiFi system is the solution you’ve been looking for. And in this regard, we feel that the Eero Pro is the best of them all. Featuring a dedicated back-haul channel, MIMO, beamforming, and a whole lotta bandwidth, there are very few systems that can come close to approaching what the Eero Pro offers.

The question is, is it worth it? If you’ve tried other systems and found them lackluster, absolutely! But just because you have the occasional dead spot in your home doesn’t mean that you should get something this beefy. For homes under 2500 square feet, one or two Eeros should work fine. But if you have a large home and an even larger appetite for bandwidth, then the Eero Pro is for you.