Years ago, you wouldn’t hear people talking about home air filtration. But nowadays, it’s all the rage. There are a couple of reasons for this. The first reason is that we’ve become more health-conscious as a society. Back in 1950, we still had to worry about diseases like Polio and Smallpox. So little things like air quality took a back seat to more significant concerns. Similarly, cigarette smoking used to be the norm. Now, fewer Americans are smoking than ever. And smokers are seeking out alternatives like vapes and nicotine patches to help them kick the habit. So it makes sense that people are becoming more aware of other contaminants we may be breathing in.

The other reason is that the quality of our indoor air has actually gotten worse. Newer houses have better insulation and better windows. These features help us stay cool in the summer and warm in the winter without wasting energy. However, they also keep the same old stale air circulating around your home. Dust, pollen, mold spores, and other irritants have no way to escape. It should come as no surprise that indoor air filters are becoming more popular by the day.

Today, we’ll be reviewing the Elechomes EPI081. This compact, easy-to-use filter cleans out contaminants from your air, helping you to breathe better. But how well does it compare to the competition? To find out, we put it to the test. Here’s what we learned. 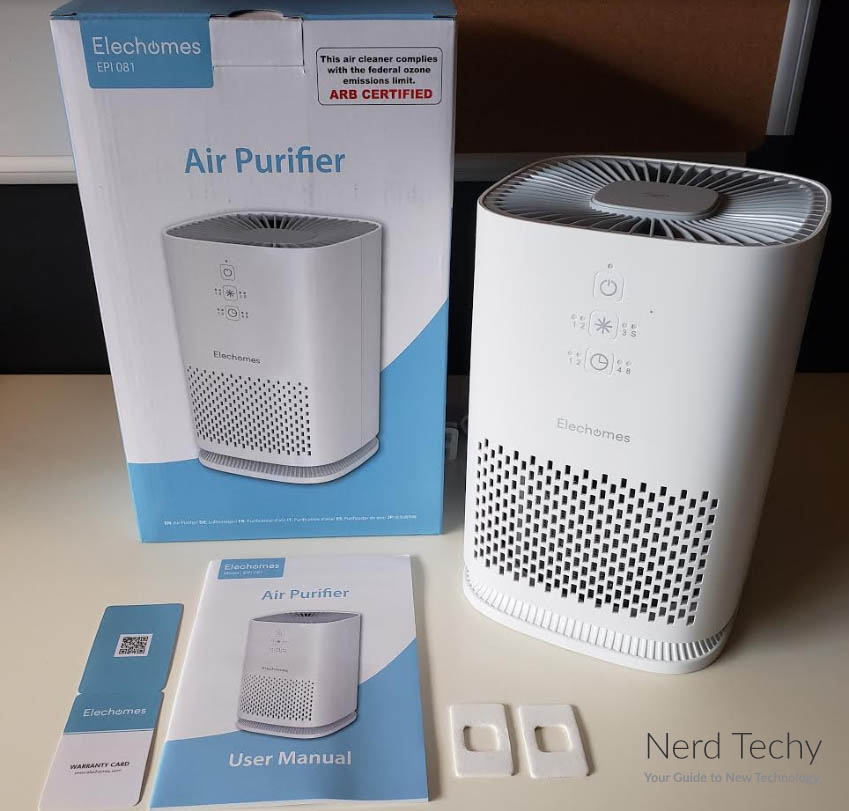 The Elechomes EPI081 is a small air filter, designed to be placed on a desk or a dresser. It’s only 9.3 inches tall, with a square shape and rounded corners. It measures 6.3 inches on each side, so it’s small enough to fit on a relatively small surface. For the size, it’s fairly lightweight, tipping the scales at 3.4 pounds. The outer shell is constructed from white ABS plastic, which matches many modern electronics. 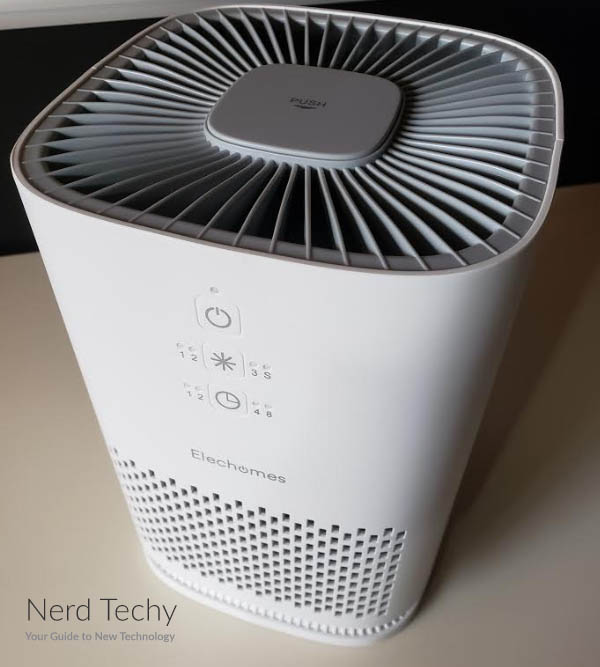 Around the bottom of the case, a 360-degree vent pulls in air from all directions. On the front of the unit, additional perforations allow for even more airflow. The outflow vent is on the top of the unit, with ribbing that extends outwards from the center. Three soft-touch buttons are located on the front of the EPI081. The top is a simple power button, while the second allows you to switch between four different fan levels. The bottom button lets you set the timer, which we’ll discuss more in a bit.

Along with the EPI081 Air Purifier itself, you’ll also receive an owner’s manual and a warranty card. Make sure to fill out the warranty card and mail it in. Otherwise, you won’t be able to take advantage of Elechomes’ 12-month manufacturer’s warranty. 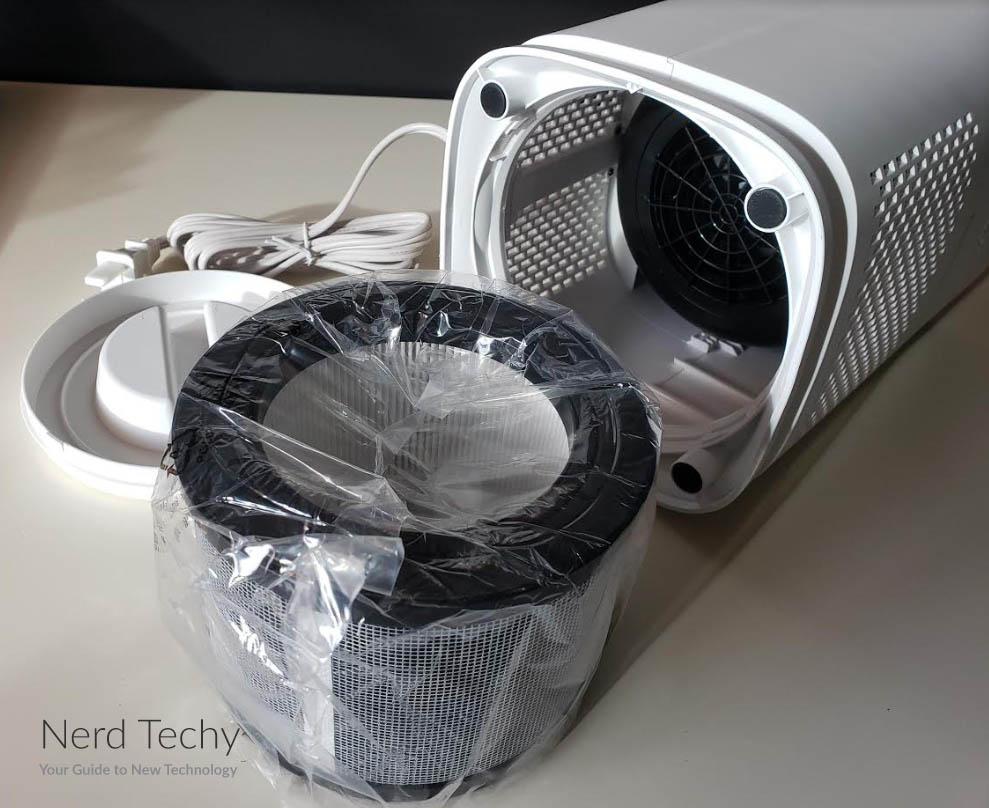 Inside of the EPI081, you’ll find a 3-stage filter. Air is drawn from the outside to the inside, then expelled through the top of the unit. The outer pre-filter is constructed from a heavy mesh weave, which catches large particles like pet hair. This will keep the inner filters from getting clogged. It also enables you to clean the outer filter by hand if need be. For instance, if your cat is shedding, you may want to clean away large hairs to extend your filter life. 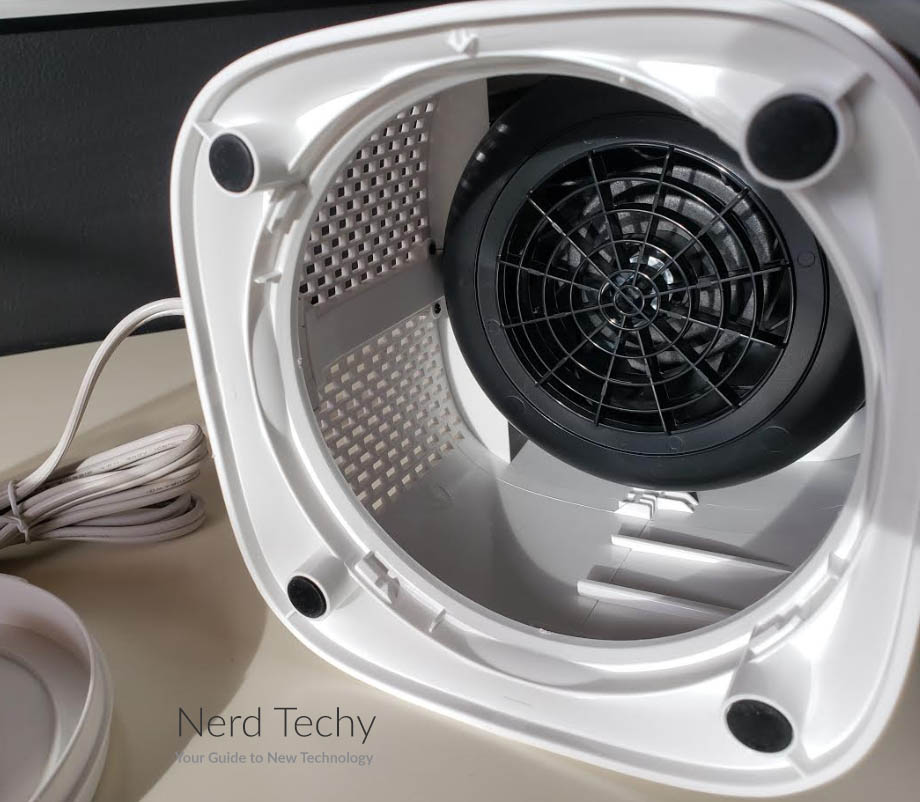 The next layer consists of a standard, accordion-style HEPA filter. This is where most of the action happens. The HEPA filter will catch particles as small as 2.5 picometers in diameter. This is enough to clean out 99.97 percent of all airborne contaminants. As such, you’re getting fairly standard HEPA performance at a very reasonable price. 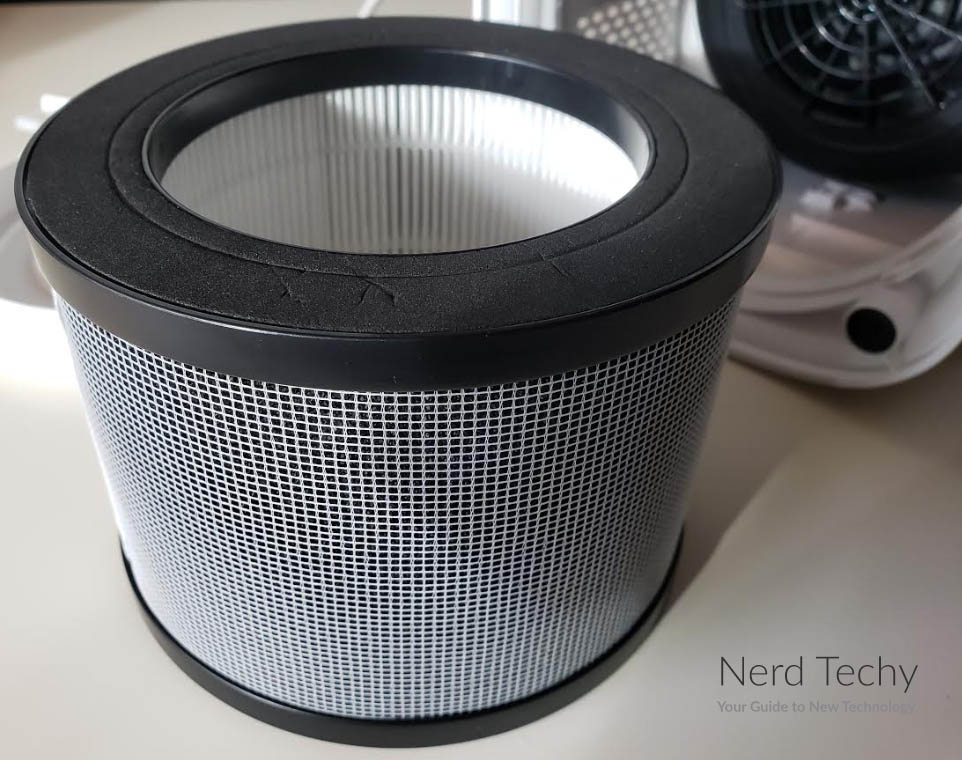 The innermost layer of the filter is made of activated charcoal. This doesn’t remove many particles, but it absorbs odors, as well as chemicals like formaldehyde and benzene. Synthetic furniture — most furniture these days — often outgasses these chemicals, particularly when it’s new. You wouldn’t walk into a chemistry lab, pour out a bunch of chemicals, and inhale the fumes. So why would you want to breathe those same fumes inside your own home? 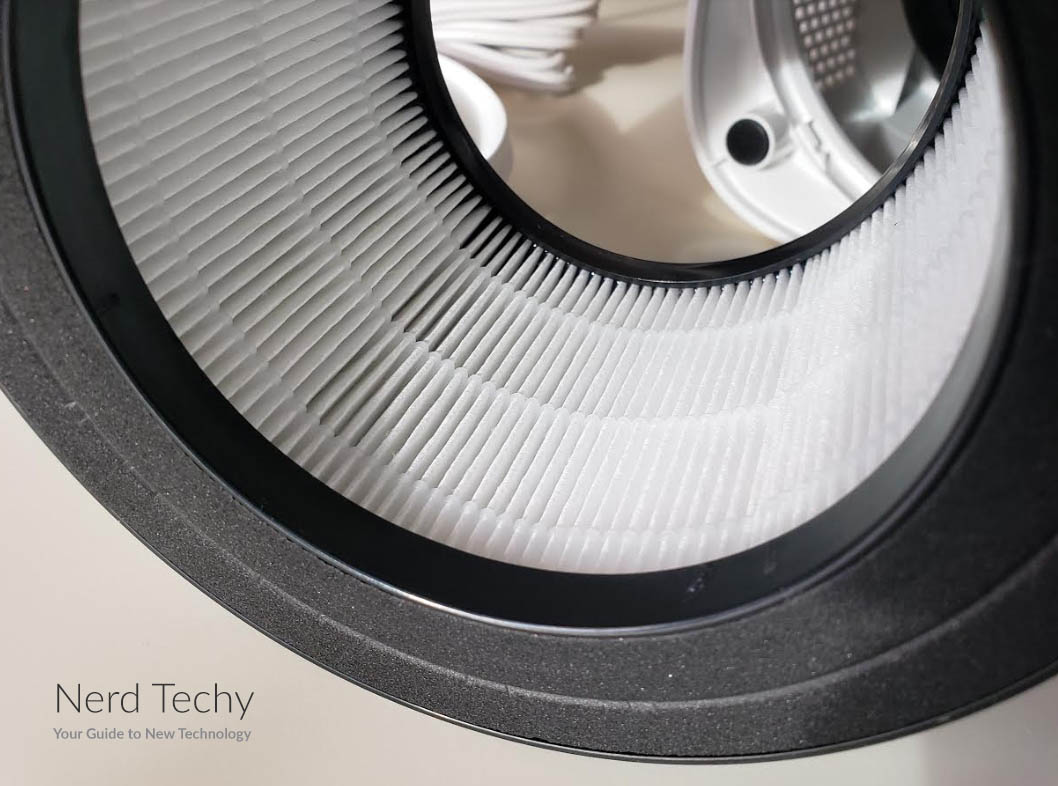 The EPI081 is rated to treat up to 215 square feet of space. However, this rating assumes that you’ve got standard 8-foot ceilings. If you happen to have a cathedral ceiling, the effective area is going to be smaller. Either way, you’re looking at a filter that’s designed for a single room. It will easily keep a bedroom clean. But you’re not going to be able to use the EPI081 to treat your entire home.

For even better filtration, check out our review of the PARTU BS-08. This is a powerful, 5-stage filter that removes a whopping 99.99 of contaminants. 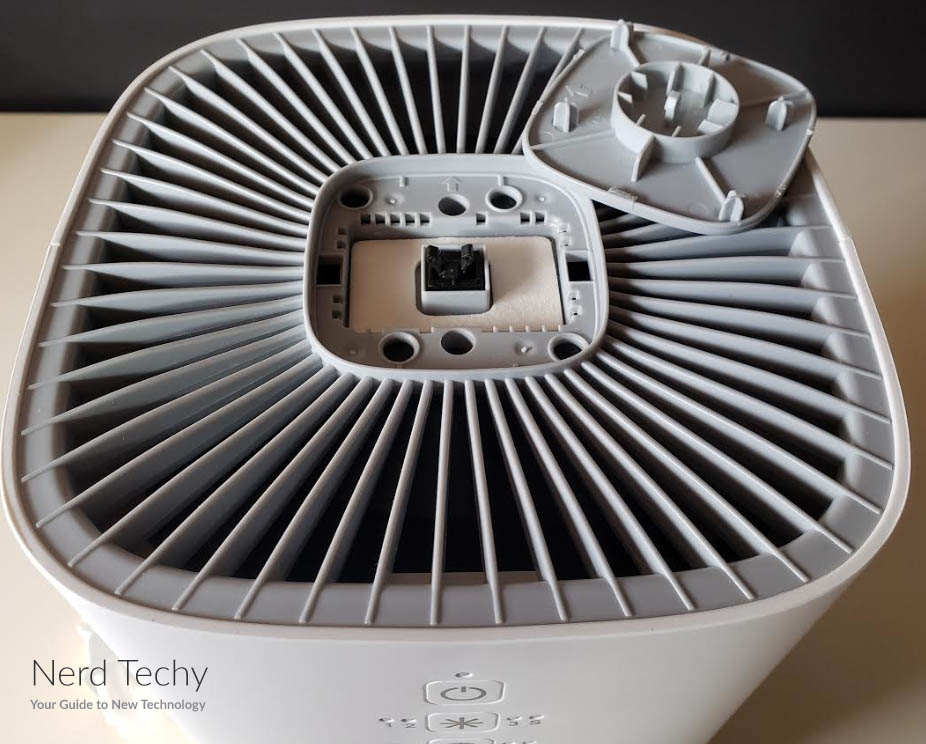 The EPI081 allows for a few different types of control. The most basic option is the simple on/off switch. Turn your filter on, and it will continue to clean the air as long as it’s running. However, this isn’t always desirable. Because of the small square footage that the EPI081 covers, it’s oftentimes wise to turn it off during the day. Then you can turn it on overnight, while your bedroom door is closed and it can do the most good. Alternatively, the EPI081 also runs on a timer. Using the bottom button, you can set it to run for 1, 2, 4, or 8 hours. 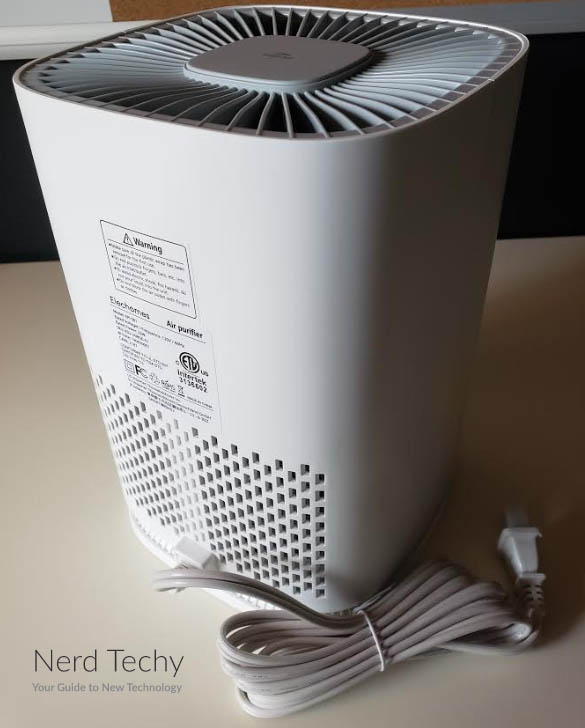 The fan can run on four different settings. The three primary settings are fairly fast, but they produce an audible whoosh that can make it hard to sleep. Thankfully, the EPI081 also offers a sleep mode. In this setting, it operates at 33 decibels. That’s literally whisper quiet, so you won’t need to worry about your air filter keeping you up at night.

For even quieter operation, consider the Bulex Hepa Air Purifier. The Bulex uses an unusual pure copper motor, which is quieter and more efficient than standard coil motors.

When the filter needs to be replaced, an LED will blink to alert you. This happens after 3,000 hours of operation. As a result, your results may vary. If you’re running the EPI081 on high all the time, you may want to change the filter more frequently. Conversely, if you’re only using it in sleep mode, you can get away with going a little bit longer. Regardless of usage, Elechomes recommends changing the filter every 6 months at minimum.

The ease of changing the EPI081’s filter reminds us of the Levoit LV-H132. The Levoit is similarly easy to change, and also has a built-in LED nightlight.

Replacing the EPI081’s filter is a simple process. First, unplug the unit, and turn it upside down to reveal the filter cap. Twist the cap to the open position, and pull it off. Next, simply pull the filter out. All three stages are contained in a single composite unit, so you won’t need to cut and fit a new pre-filter. Once you’ve removed the original filter, insert the replacement, and ensure that the seal is properly seated. Then, close the filter cap. There’s a triangular marker on the cap. Make sure it’s aligned with the arrow on the filter, which will ensure proper seating. Then, turn the EPI081 over, plug it in, and hold the on/off button for 3 seconds. This will reset the filter timer, so you’ll be notified next time you need a change.

The EPI081 also has an aromatherapy option. Simply add a few drops of essential oil, and it will permeate the air. 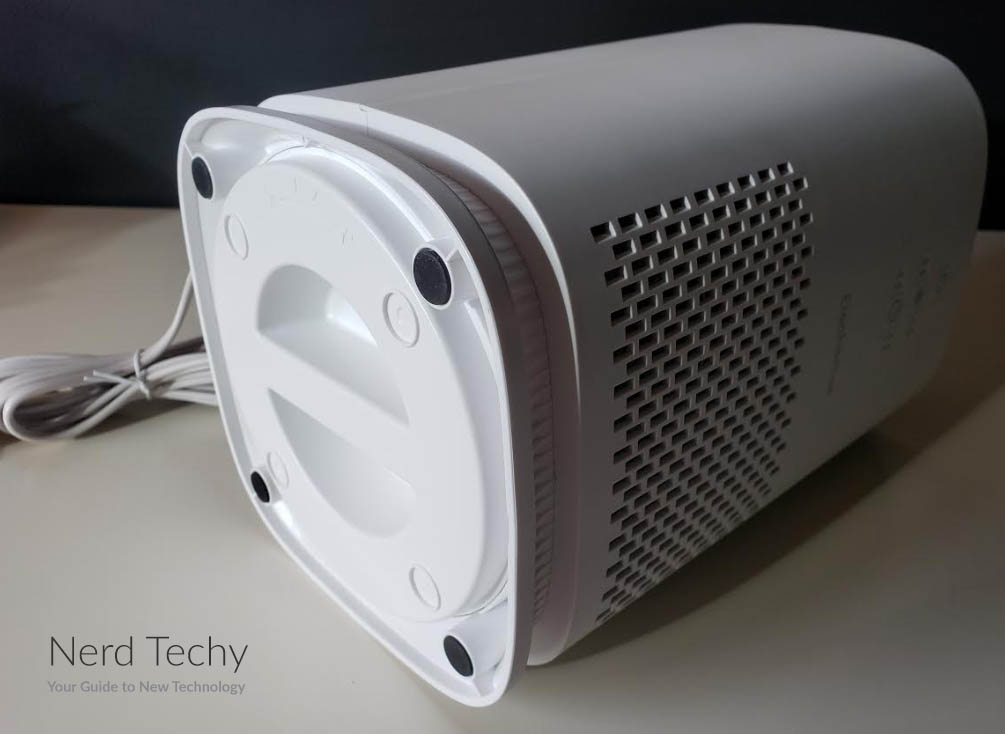 What Does the Elechomes EPI081 Remove?

So, what can you expect to achieve with the EPI081? Numbers like “99.97 percent” may sound impressive, but they don’t tell you the full story. And like you, we appreciate specifics.

The outer layer will trap large contaminants, such as pet hair. This is basically designed to keep the inner filter free of debris. Normally, you shouldn’t need to worry about the pre-filter. However, if there’s a lot of hair or dust clogging it up, it’s possible to wipe off the gunk without damaging the filter.

The next layer is the main attraction. The HEPA filter will collect mold spores, pollen, and other fine contaminants. If you suffer from seasonal allergies, you won’t need to worry about these kinds of allergens. Finally, the inner activated charcoal layer will remove odors. Whether you’re concerned about cooking smells or cigarette smoke, the smell will be long gone when the air leaves the filter. 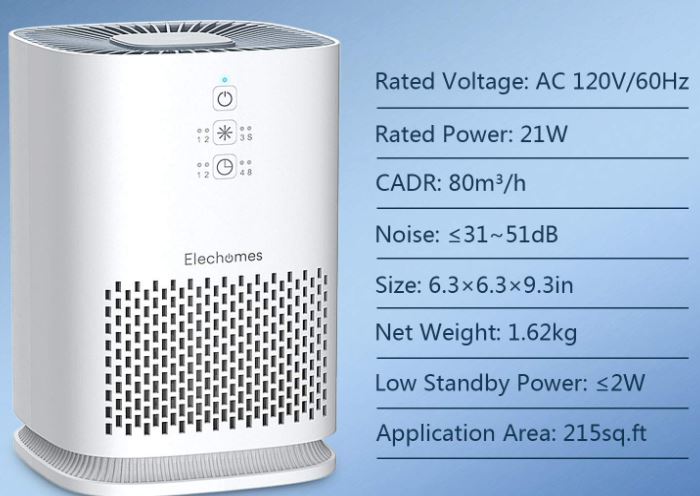 So, how does the Elechomes EPI081 stack up to the competition? It does just fine. With the ability to remove 99.97 percent of particulates, it’s right in line with HEPA standards. But that’s just the bare minimum. What really stands out to us is how easy the EPI081 is to use. The timer and sleep modes combine to create the perfect bedroom air filter. The filter itself is easy to change, and you don’t have to futz around with trimming a pre-filter. Best of all, the EPI081 is compact. There’s plenty of room on your dresser or desk for this little beast.