These days, you can’t be too careful about the quality of your home’s indoor air. This is a natural side effect of the way we build our homes. As recently as 50 years ago, air conditioning was unusual in residential homes. And a hundred years ago, “central heating” meant having a big fireplace in the center of your house. To say the least, people got a lot more fresh air. But nowadays, the same air gets circulated over and over throughout your home, keeping the same contaminants in a vicious cycle. This is especially problematic with contaminants like mold spores, which can actually be coming from inside your house. While in the old days the spores would have vented out, they can continue building in your home until they reach toxic levels.

Today, we’ll be taking a close look at the Levoit LV-H132 True HEPA Air Purifier. This is a miniature air purifier that packs a lot of power into a small package. If you’re looking for a small air purifier for your bedroom or another single room, it’s a great way to keep you breathing free and clear. But is it worth the investment, compared to other filters on the market? We’re about to take a close look, and find out. 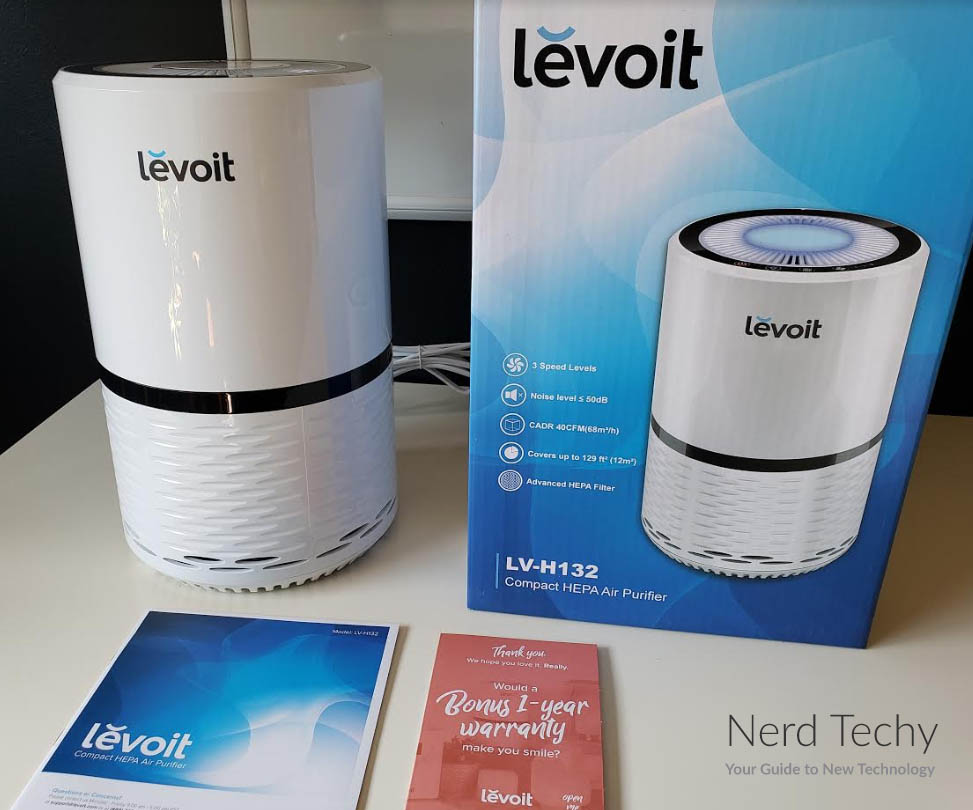 If you’re looking for an air filter that’s easy on the eyes, the LV-H132 is sure to get your attention. It’s a compact cylinder, measuring 12.6 inches high and 7.5 inches in diameter. The shell is available in black or white, with contrasting tops and an opposite-color band around the center. On top, you’ll find a soft-touch control panel, which we’ll talk about later in more detail, as well as a nightlight. The light glows a soft, appealing blue, and can be turned on or off at the touch of a button. It’s worth keeping off to save power, but it’s also attractive to leave on during the night, or even just to brighten a dull room during the daytime.

The bottom half of the cylinder is cut with horizontal oval hashes, which allow for easy air intake. The 360-degree intake allows the LV-H132 to draw air in from all around the room, so no areas will be left out. However, if it’s put in a corner or near a way, its efficiency will be reduced. The manufacturer recommends placing the purifier at least 15 inches from any obstacles, and that seems like sound advice. 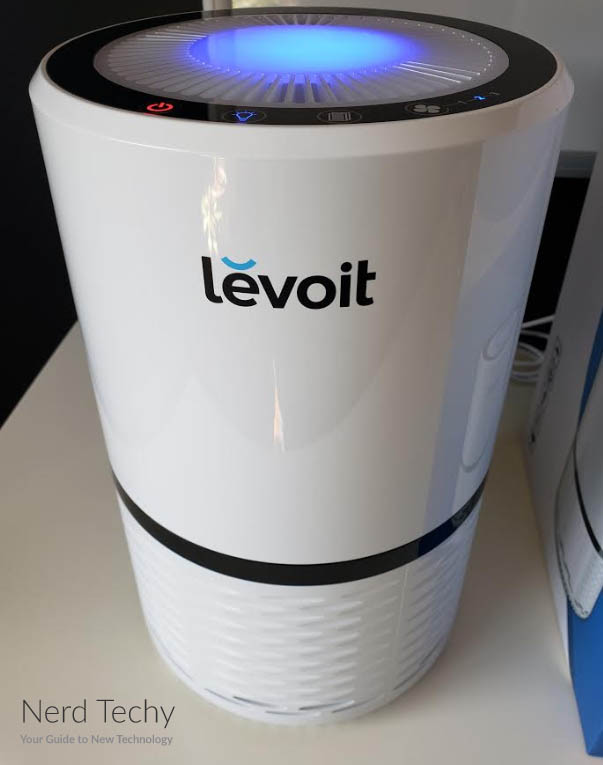 Besides which, there’s no reason to keep the LV-H132 out of sight. While some air filters aren’t very attractive, this one has a slick, modern look that will match most current electronics. The upper half of the case has a smooth ABS plastic finish that is similarly attractive. On the top, around the blue nightlight, outflow vents are arranged in a star pattern, like the spokes on a bicycle wheel. They vent in a 360-degree pattern, much like the intake vents, which allows for even distribution of fresh air throughout the room.

One thing to keep in mind if you’re considering the LV-H132 is that it’s not a good idea to put it on the floor. It’s so short, you could easily trip over it. It’s best positioned on a dresser, a nightstand, or another piece of furniture with easy access to a power outlet. That said, if you do have any issues, Levoit offers a 12-month manufacturer’s warranty. This will be more than sufficient to cover any ordinary failures. 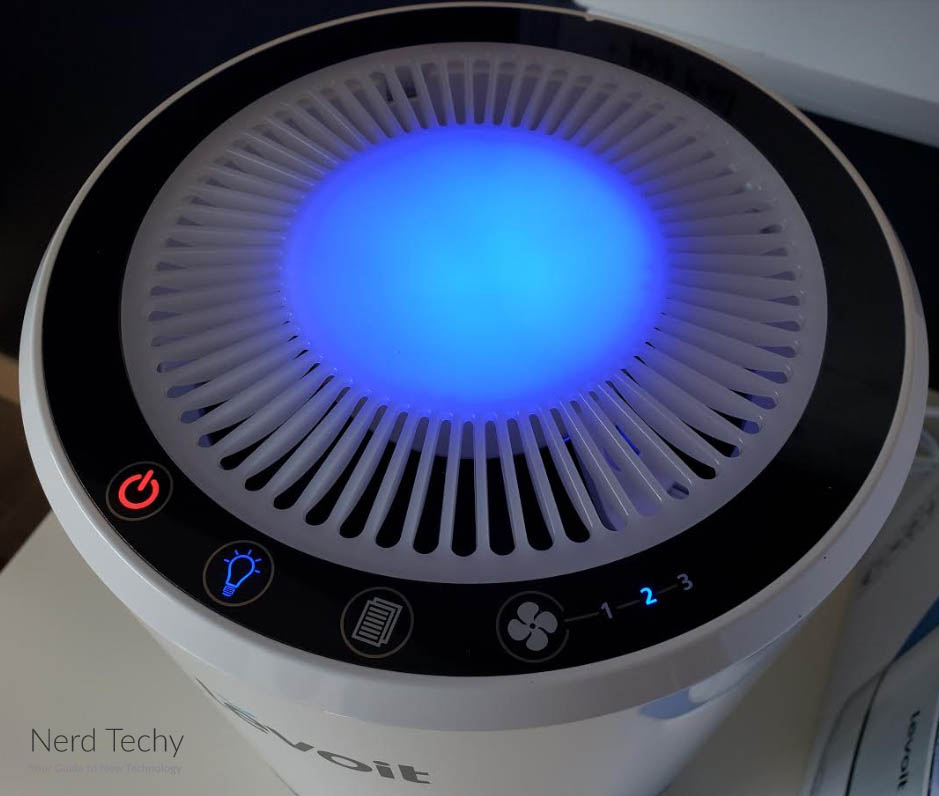 Like most HEPA filters, the LV-H132 has multiple filtration stages to remove progressively smaller particles. This helps to prolong filter life by preventing fine filters from getting clogged up with large particles. However, the downside of such a system is that when you do need to replace your filters, you need to replace the entire set. This is exacerbated by the LV-H132’s reliance on a single filter cartridge that incorporates all three layers. It’s frustrating not to be able to remove the pre-filter and wash it by hand. But at the end of the day, considering the small size and low cost of replacement filter cartridges, this is a minor complaint.

The LV-H132’s three filter stages include a coarse outer filter, an inner, ribbed HEPA filter, and an inner activated carbon filter. Altogether, these filters will remove particles as small as 0.3 microns, or about 99.97 percent of all airborne particles, as well as most household odors. 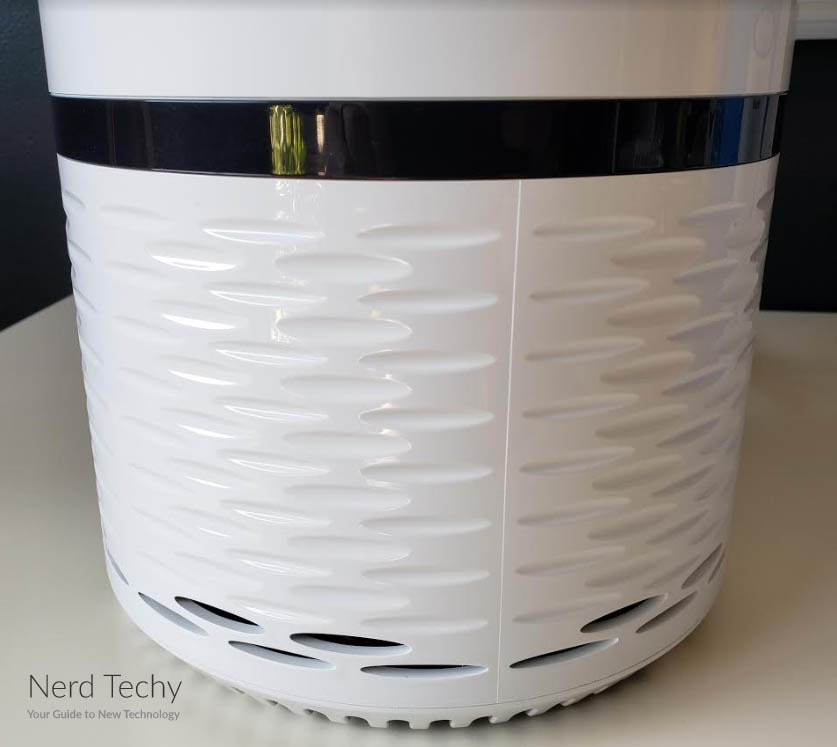 The outer pre-filter captures larger particles, and prevents them from getting sucked into the inner HEPA filter. It collects animal dander, most dust, and even large mold spores that like to stick to various surfaces. As we mentioned, this filter isn’t washable, but it’s more than sturdy enough to last as long as the primary filter. One thing that does help if you have animals is to brush large bunches of hair off the outside of the filter and throw them in the trash. This fur can cause air flow problems, but it usually collects right on the intake vents, so it’s easy to remove.

The middle, ribbed filter is the main particle filter, and it’s the part that earns HEPA’s official designation. This filter removes finer particles like dust mites, mold spores, pollen, and particles from smoke. These contaminants form the bulk of irritants in modern indoor air, and a well-maintained HEPA filter will keep them out of your lungs.

The inner activated carbon filter isn’t designed for removing particles, which is why it comes last, after those particles have been cleared. Instead, it removes odors from the air. This includes not only odors from food, but also from household cleaning products. 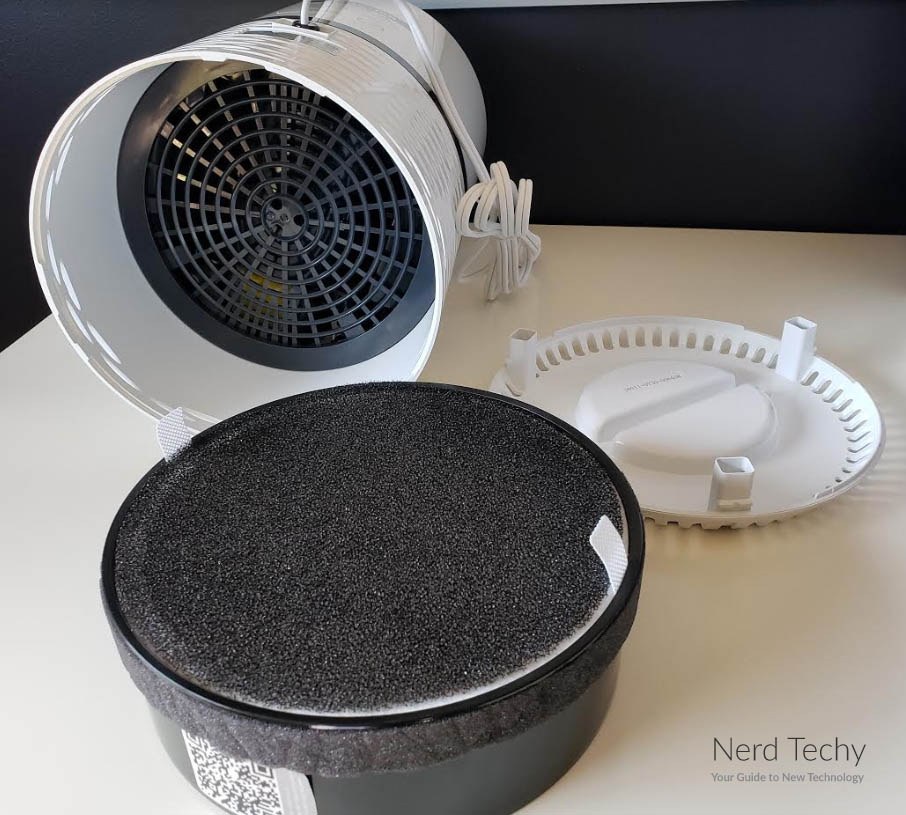 One thing the LV-H132 does not offer is an ionizer. This may or may not be a good thing, since there’s significant debate over whether or not ionizers are even healthy. However, if you’re looking for a small filter that produces no ozone, the LV-H132 is a solid choice.

For even more powerful filtration, read our review of the Bulex HEPA Air Purifier. This is an exceptionally powerful filter that removes particles all the way down to 0.1 microns, which is small enough to remove even airborne viruses. 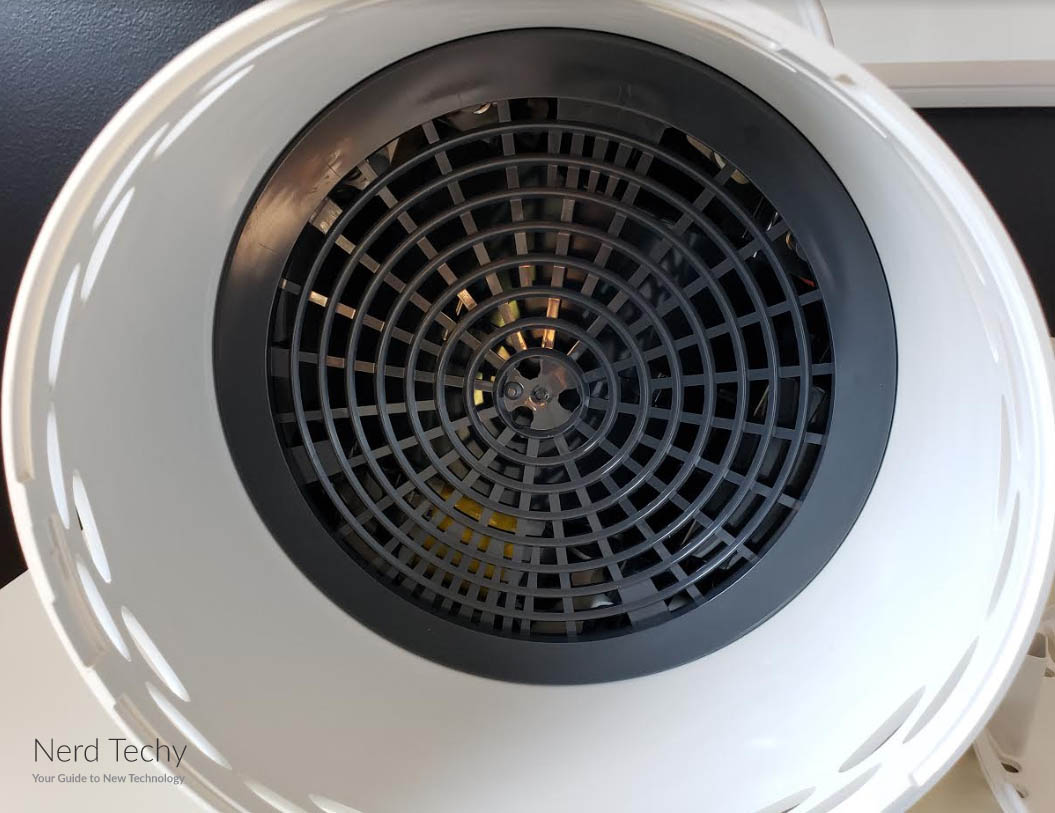 What Does the Levoit LV-H132 Remove?

As we’ve mentioned, the Levoit LV-H132 removes particles as small as small as 0.3 microns. While this isn’t small enough to remove most airborne viruses or small bacteria, it’s more than powerful enough to remove most sources of irritation. Smoke particles, pollen, and mold spores will be easily filtered out, which handles the vast majority of seasonal allergens. The charcoal filter also does an efficient job of removing odors, which may not be a health benefit, but nonetheless improves your quality of life.

That said, the LV-H132 is a small unit, and only handles about 100 square, about as much floor space as an average-sized bedroom. If you want to cover a larger area, consider the TruSens Air Purifier. This powerful little machine can handle up to 750 square feet of standard-height interior space, which is a significant area for a single, compact air purifier. 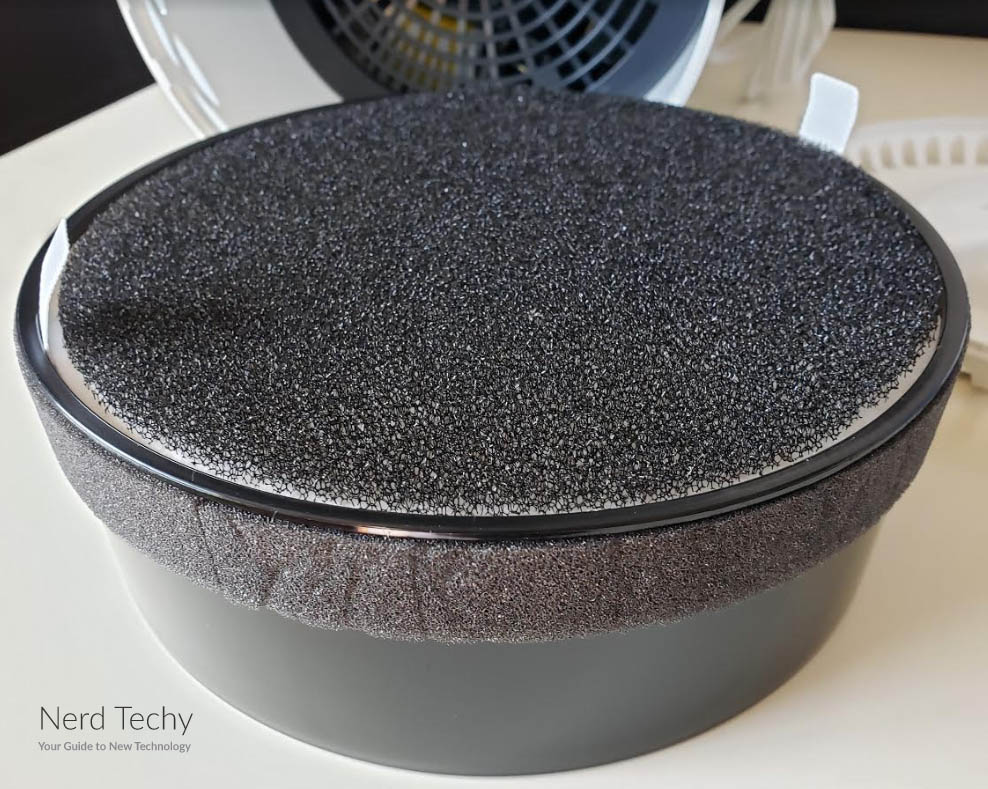 One nice thing about the LV-H132’s small size and simplicity is that there just isn’t much to operating it. There are four buttons on the control panel, which perform four different functions, all of which are easy to understand. The first is a power button, which does exactly what you’d expect. The second button controls the night light, which we’ve already discussed. 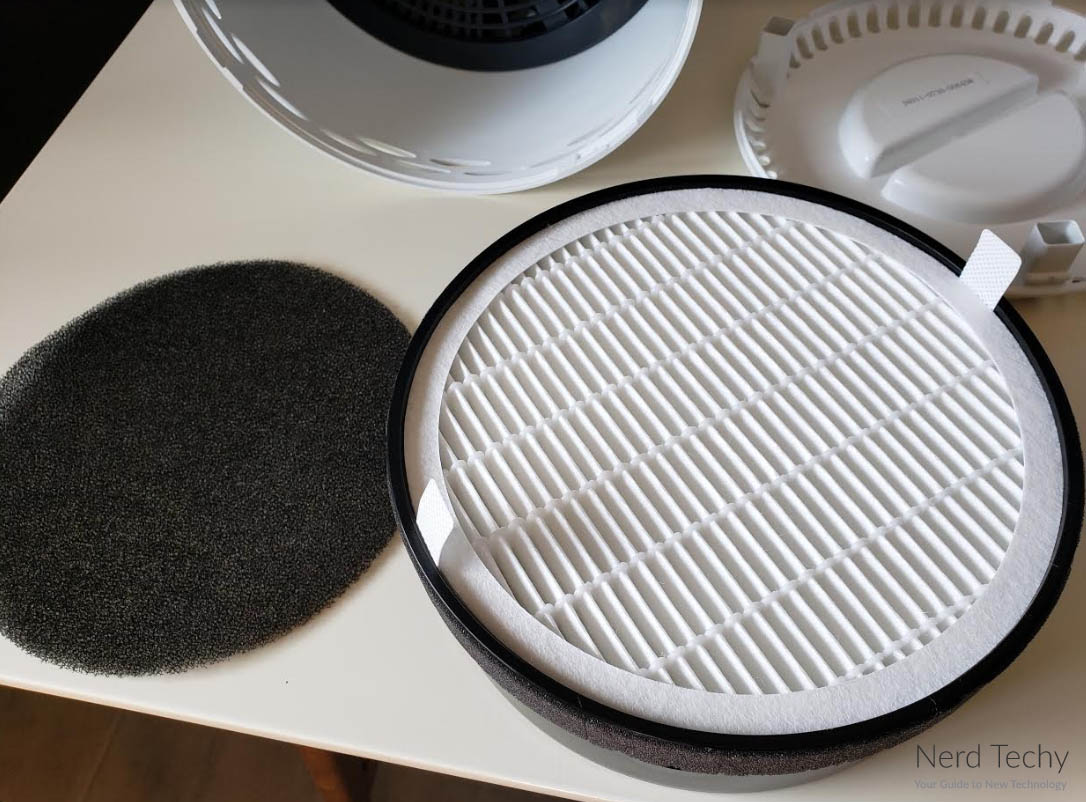 The third button is the reset button for the filter. Normally, it will just sit there, unused. However, when the filter is dirty, the button will light up. At this time, you’ll need to replace your filters. All three filters come in a kit, and need to be replaced together. Once you’ve done this, press and hold the reset button for 3 seconds. The light will turn off, indicating that the machine now recognizes that there’s a new filter in place. Keep in mind that there’s no smart sensor involved in this process. The machine simply keeps track of how long it’s been running, and asks for a new filter accordingly. So you may need to change the filter a bit sooner if it’s seen a lot of abuse, and you may be able to get away with stretching a lightly-used filter for a bit.

Finally, the fourth button controls the fan speed. Pressing the button once will turn the fan on, and pressing it again will cause the fan speed to increase. Pressing the button when the fan is on the highest speed will reset it back to the lowest speed. A helpful set of LED lights indicates the current setting, so you’ll be able to tell how fast the fan is running just by looking at it. 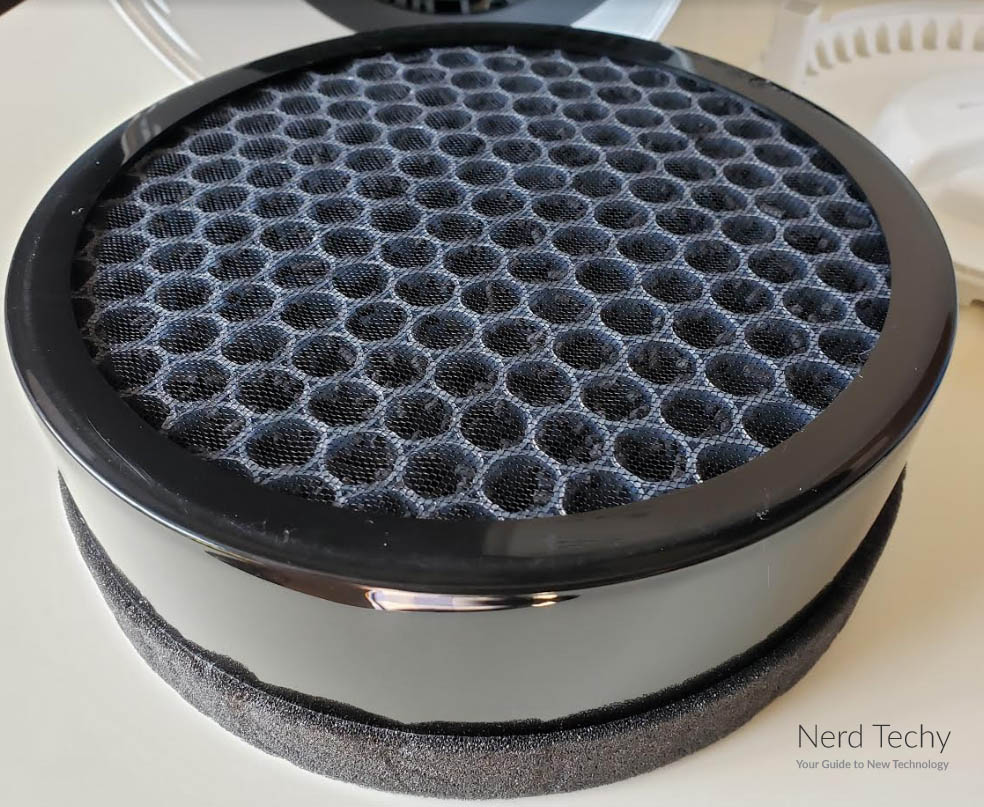 So how does the Levoit LV-H132 compare to other HEPA filters in its price range? It depends on what features you expect. In terms of particle filtration, it meets the HEPA standard of 0.3 microns, which means it’s good enough for virtually any purpose, but still not the most powerful possible filter on the market. The odor filtration, however, is very good, although it’s hard to judge when the filter treats such a small space. Still, if you close your bedroom door overnight with the filter running, you’ll notice a distinct difference between the filtered air and the air outside, particularly if you cooked a smelly dinner that evening. 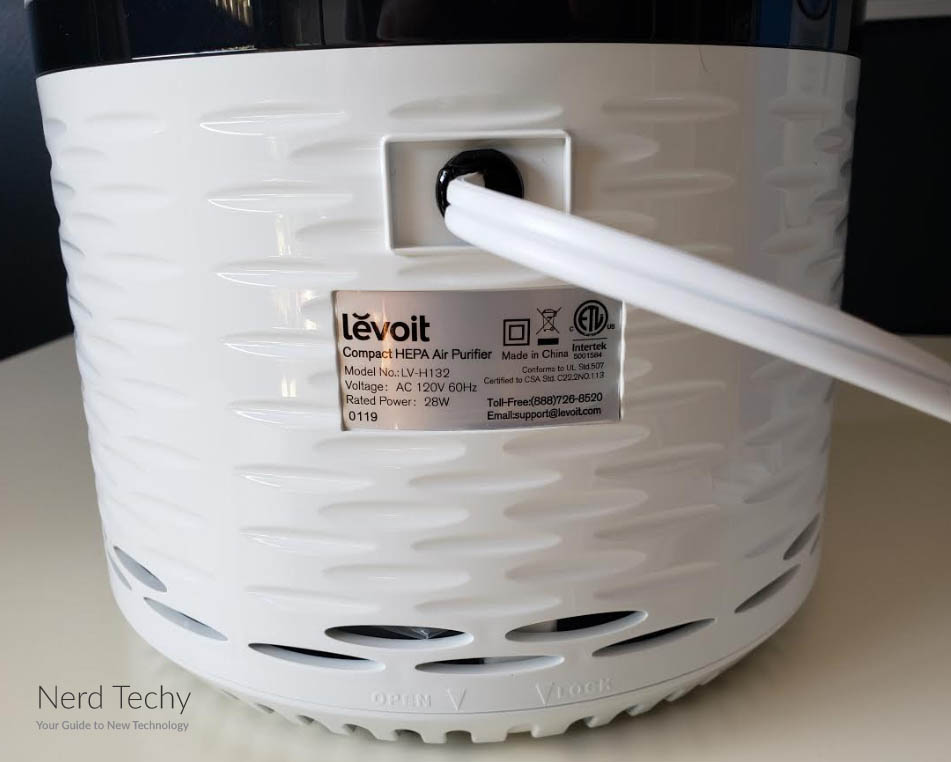 As far as extras go, the LV-H132 brings a lot to the table. The built-in nightlight isn’t exciting and doesn’t change colors, but it gets the job done, and it’s easy to control, with a simple on/off operation that other manufacturers would do well to imitate. The only real disappointment was the small effective area of 100 square feat. This means the LV-H132 is better suited for individual rooms than it is for treating half the house.

At the end of the day, this air filter provides excellent value. We can happily recommend the LV-H132 for ensuring that you get experience good air quality while you’re getting a night’s sleep. For that purpose, it’s ideal.