Picking an air purifier can really be broken down into a couple of main concerns. One category of concern relates to noise. You don’t want to hear the machine buzzing away while it works, especially if it’s positioned in a bedroom. Another category involves more practical considerations; like the size of the room you want to clean. But once you’ve got those kinds of essentials worked out, finding a reliable air purifier is actually not that tough.

The TruSens Air Purifier has a lot of distinct traits. For starters, it’s adopted the increasingly popular circular design that you see across the industry. They’ve also gone with touch controls. Even though there may not be a huge difference between the functionality of touch controls and analogue controls, there is a big difference when it comes to style. And if you’re going to shove an air purifier into the center of your home, it may as well look nice, right?

The TruSens also seems to have things thought through when it comes to filtration. This is actually a four filter system. In addition to the three standard filters that you’ll find with almost any air purifier, they’ve thrown on an extra layer of filtering aimed at destroying germs. So instead of just trapping bacteria, you can actually eliminate it. 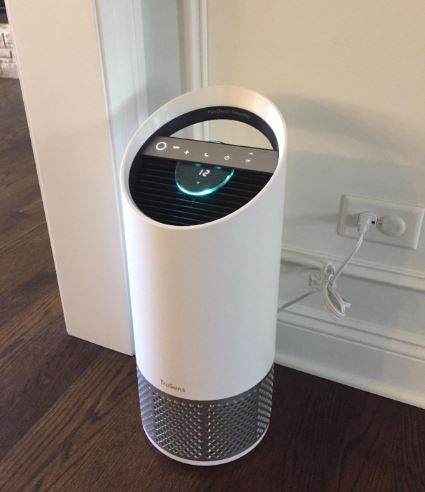 Going form medium to large is a bit like adding another small unit to the medium unit, or is akin to running three small units. It’s also another 15% leap in size. So to put that simply, bigger rooms will need bigger purifiers. And in any case, you’ll need to find a suitable location for the purifier. That also means you want a location that’s at least 18” away from a wall, which sort of adds to the overall size of each unit. At least, in terms of the amount of space it takes up within a room.

The difference between these units is mostly their room coverage. The small purifier can handle 250 square feet, the medium handles 375 square feet, and the large can take on 750 square feet. But there are a handful of differences in their features that help set the smaller unit apart from the larger ones.

Notably, the small version of the TruSens Air Purifier doesn’t have an automatic mode because it lacks an environmental sensor. That’s just a reflection of scope and cost. One thing you might lament is the lack of a night mode. But that isn’t actually a detriment because the unit is already so quiet when you’re running it on the lowest speed. 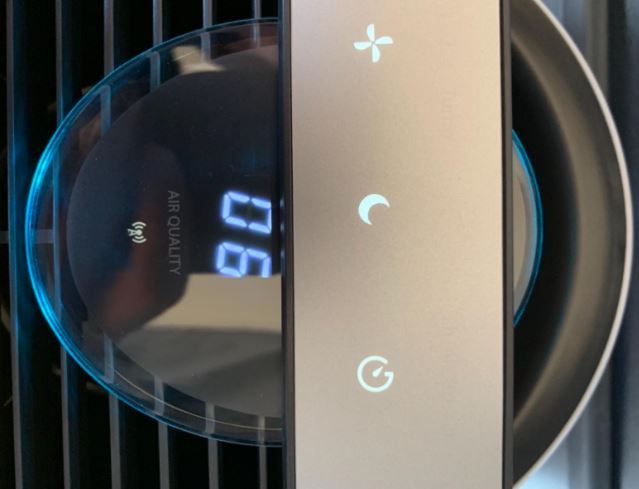 Another thing that’s potentially problematic about the small unit is that it doesn’t offer any timer settings. So you can’t decide to run the fan a bit faster for a few hours. But at the very least, you can still move through several levels of speed control for the fan.

Notably, the 360-degree design is aimed at capturing air in a full radius around the unit. That allows for a more efficient air dispersal as well. This can be useful because it allows more modestly sized fans to do the work of much larger fans. So positioning alone can do a lot for an air purifier. And the actual placement of the unit will also help determine whether or not you’re getting the amount of square footage that you expect. 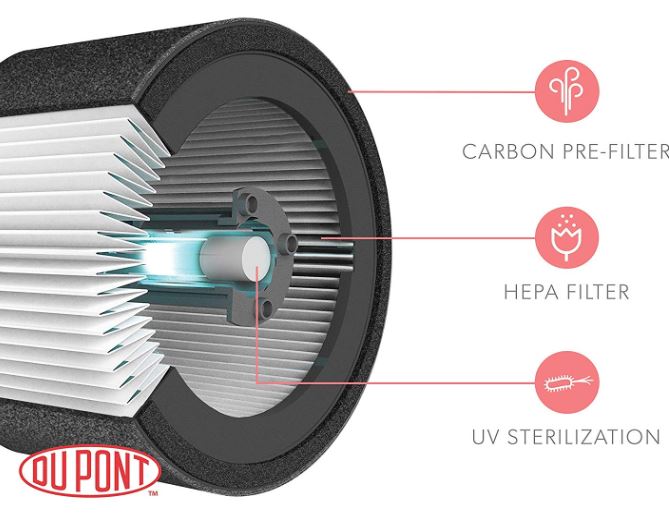 For instance, if you take the 750 sq. ft. model and shove it into the corner of a room, do you know what’s going to happen? You’re going to carve its efficiency down by at least a third. An air purifier is really best positioned towards the center of a room, which is exactly the point behind these sort of circular designs.

There are a total of four levels of purification. The first three layers of filtration are pretty standard stuff; the kind of thing you’ll find on almost any air purifier that’s worth using. The very first layer is a pre-filter which is there to capture hairs and large flecks of dust. And the second filter is a carbon pre-filter, which is there to scrub smells out of the air. For chemical smells, kitchen burning smells, and so forth. The carbon does work fairly well.

Third and most important, there’s a HEPA filter. Here they’ve gone with a higher-class HEPA filter capable of capturing particles smaller than one micron. But the filter can’t actually do anything with those tiny particles after they’ve been captured. And that’s where the fourth layer comes in — ultraviolet sterilization. This layer will destroy viruses and germs that collect on the filter, which prevents them from becoming recirculated through the air. 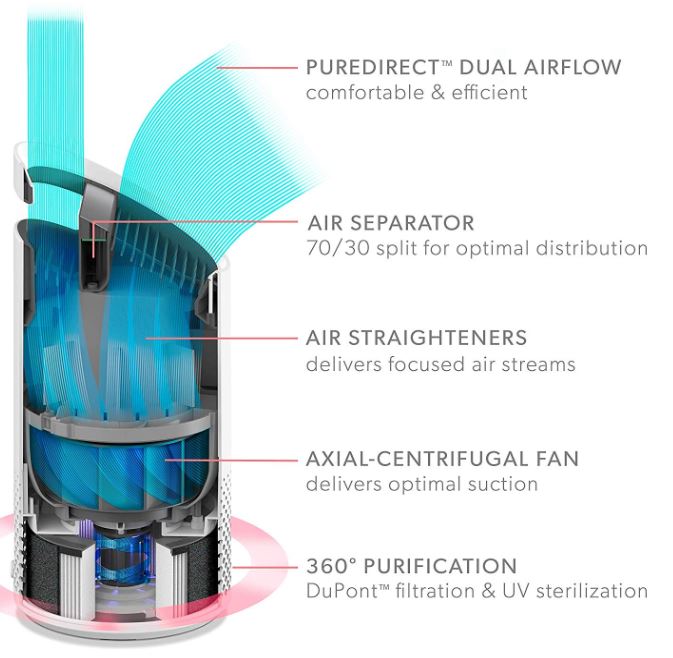 The top of the unit has a dual airflow design. That’s basically a fancy way of saying you can affect the direction which the air is ejected from the machine. The Dual airflow design allows the air to be separated into two independent streams. This lets you deliver purified air in a more efficient manner through the room. So instead of the air all ending up blasted in one direction, it ends up going in two or more.

Craftsmanship is no small part of what makes for a good air filter. Because what’s the difference between using an air filter taped to the side of a box-fan, and an air purifier like this? Well, air will always take the path of least resistance. So if there are even small spaces where air can manage to get around the filter instead of passing through it, then air is going to prefer doing just that.

Which means you really need a smooth and tight design inside the machine. And outside the machine, naturally, you want something that looks like it might belong inside a home or professional space. In this case, you’ll find a machine that was clearly assembled with tight seals in mind. Though they have gone out of their way to ensure that you’ll only be able to use their filters inside the unit. 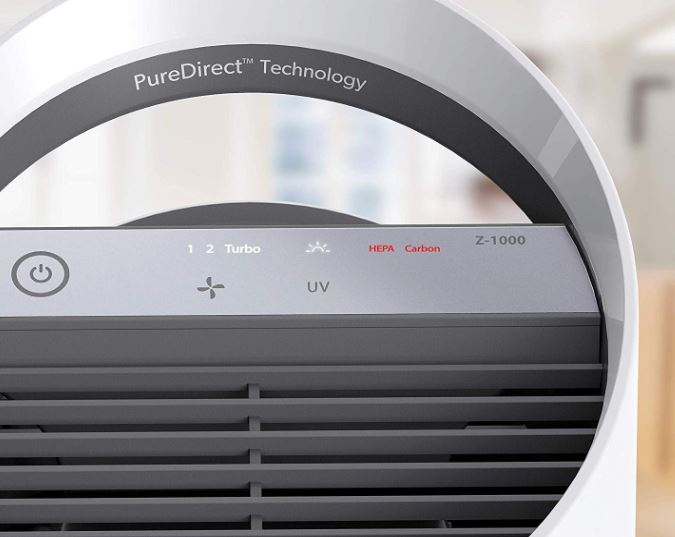 Actually managing the machine is quite simple. Touch controls are extremely common among the past few generations of air purifiers. This TruSens purifier is no exception. The top controls include the ability to manage every aspect of the unit. That includes fan speeds, auto–timer, filter replacement indicators, and activating the UV mode.

As is almost always the case, the replacement indicator can’t be trusted on sight. When it shows up, don’t think of it as a guarantee that your filter needs to be replaced. Think of it more like a suggestion to check the filter. If your filter looks clean, you can keep it running a while longer. Then you might want to set a timer on your phone to check the filter again in two months. This is an especially effective strategy because the inclusion of UV means that you’re not going to run the risk of spreading certain contaminates back into your environment over time.

Among air purifiers like the TruSens, white is far and away the most common color. Because white objects have no trouble blending into a home. And that’s pretty much why this unit uses a white chassis. Since so many places use white walls, they do tend to fit right in. Though it is possible to still find a few black chassis units, those really have fallen out of style.

This purifier has some limitations. Some of the most impressive air purifiers on the market right now are starting to integrate app control. That’s actually a bit expensive to add to a purifier, placing a Wi-Fi chipset onboard can easily increase the price of an air purifier by 20% or more.
The TruSens Air Purifier didn’t go that route. Everything is done with the touch controls. And those are enough in most cases, especially if you happen to have one of the models with an auto-mode. 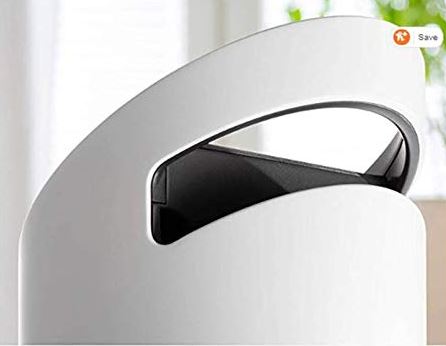 Another limitation is that these purifiers do not work with Alexa or any other voice assistants. For people who have been making good use of voice-commands with smart-home devices, that can be a minor drawback. But then again, with the auto-mode, that is a minor drawback indeed. It becomes more of a drawback on the smaller unit because it doesn’t have the auto-mode, but not so much that it would really interfere with operation. 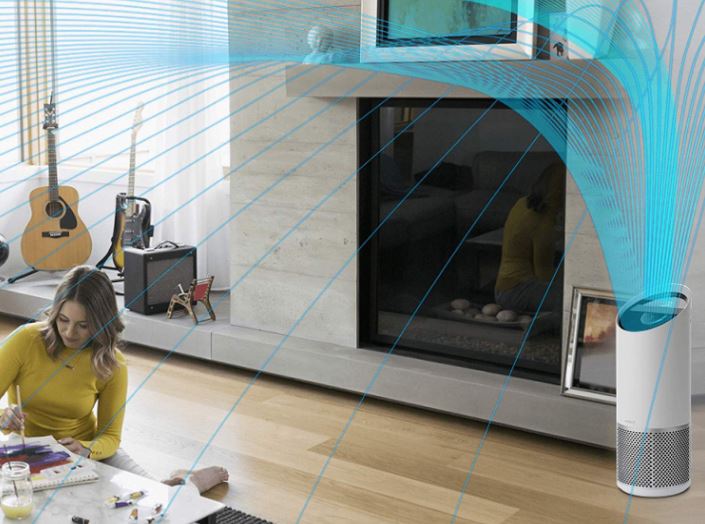 Who Should Choose TruSens Air Purifier?

There are a million different air purifiers out there. And a lot of them are pretty good. The TruSens has some distinct strengths and weaknesses. The inclusion of UV will raise eyebrows for some. But the fact you can turn the UV on and off as needed is a great middle-ground between having it and not having it. That way you can basically eliminate concerns about ozone exposure by only flipping it on for a few minutes at a time, every once in a while. 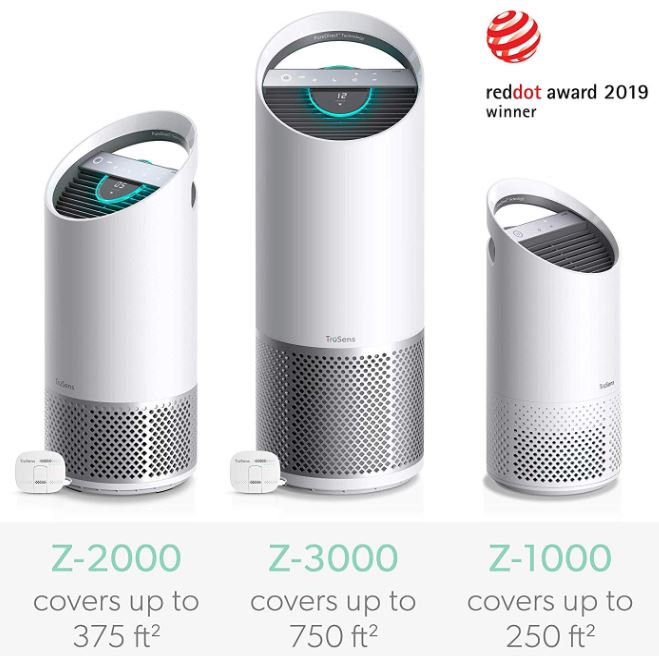 If you really want app support, you can get it on a fancier purifier. It would add to the cost of the unit in a considerable way, but it’s possible. The same is true with smart-home integration through voice assistants. But for someone who’s looking for something a little more set-and-forget, the TruSens Air Purifier should make sense.