TechGuru May 26, 2017 Electronics No Comments

With 4K content now available on Blu-Ray, Netflix, and even through your cable provider, more consumers than ever are choosing to upgrade their home television sets.

UHD just may be the hot feature that everyone wants, but ‘smart’ functionality can improve your TV watching experience, allowing you to access content from anywhere you like, at any time.

For a long time, only high end TVs had both of these features. But today, there are a few models hitting the market that provide high end functionality at a low end price.

Element Electronics is the latest manufacturer to introduce a high end TV for the budget conscious. With a list of features that would commonly be found on televisions that cost many times the price, many prospective buyers are left wondering what the catch is. You can’t judge a book by it’s cover, so we decided to go hands-on to find out. 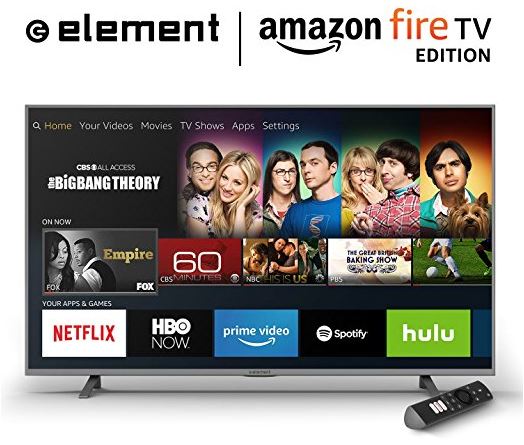 Element Electronics’ newest 4K televisions are available in four different sizes. 43-inch, 50-inch, and 65-inch TVs are all on the larger end of the spectrum, making them appealing to consumers who want a more cinematic experience. This is a true 4K set, and smart-TV functionality is provided by the integrated Amazon Fire TV system.

Resolution is one of the main selling features of most televisions, but it isn’t really the only determining factor in what makes your video look good. However, this television has all the technical features that we look for in a higher end model. Not only is it a true 4K television, but it’s direct lit as well. 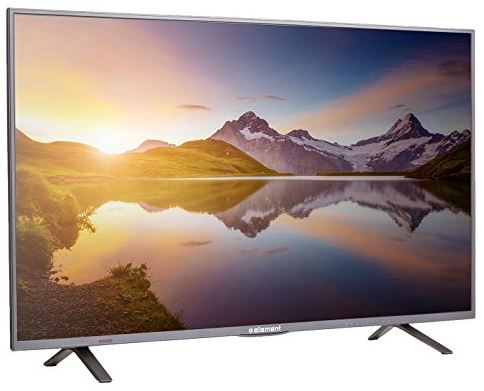 What this means is that each individual pixel has an RGB LED that illuminates it. Many inexpensive TVs are passively lit. This means that they have a large backlight in the back, with several shutters behind it that allow the light to come through. The advantage of a direct lit TV is images that are sharper, more vibrant, and have higher contrast.

We have to admit, we were really impressed with the TV when we first turned it on. It definitely has a “wow” factor, caused primarily by it’s incredibly vivid colors.

The saturation is definitely a bit higher than usual. If you were to edit photos or do graphic design work on it, we probably wouldn’t recommend this TV as it isn’t a true to life recreation. But for movies and TV shows, the picture is extremely engaging.

Smart TV’s have been, historically speaking, very expensive. Consumers often spend an additional $250 on a TV with software-driven features, when compared with a standard model. For a long time, this makes sense. It cost vendors a lot of money to develop these systems, and this cost was passed onto consumers. 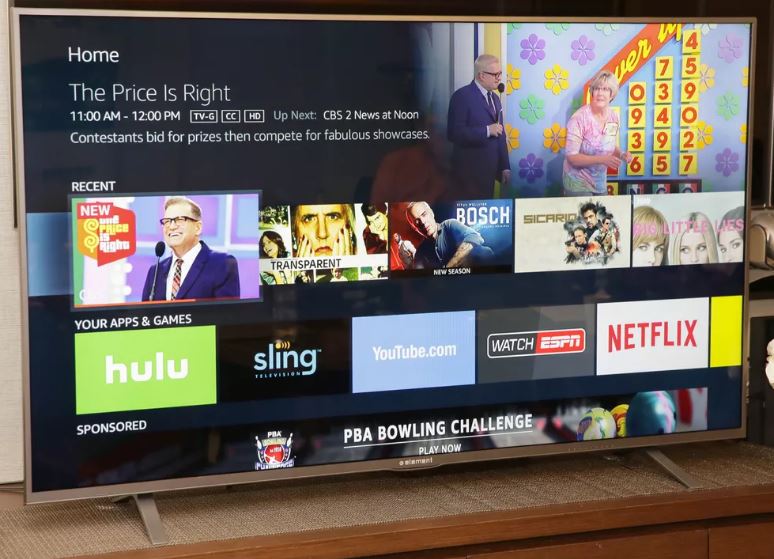 But this isn’t your ordinary smart TV. Element Electronics did not develop their own system. The licensed the Amazon Fire TV software and integrated it directly into their platform.

What can you do with Fire TV? The most obvious feature is watch Netflix. 4K streaming is supported by Netflix, as well as Amazon’s own Prime Video service, both of which have a decent library of 4K content.

But that isn’t all that you can access through fire TV. You can watch YouTube, Vimeo, and a number of other video services. Music streaming is supported through both Spotify and Amazon Music.
There are a ton of other apps available as well. The library isn’t quite as developed as Android based TVs, but you still get access to social media, the internet, and a number of other brand-oriented services. We couldn’t find a copy of angry birds, but we did manage to order a Pizza from Dominoes.

One of our favorite features about Fire TV was the interface. We’re not talking about the video interface. It was certainly easy to use, but really nothing particularly remarkable. We’re talking about the voice interface. All you have to do is hold down a little button on the remote, and say a command. Saying things like “Open Netflix”, “Switch to HDMI”, or “Turn Off” all performed the actions exactly as you’d expect. 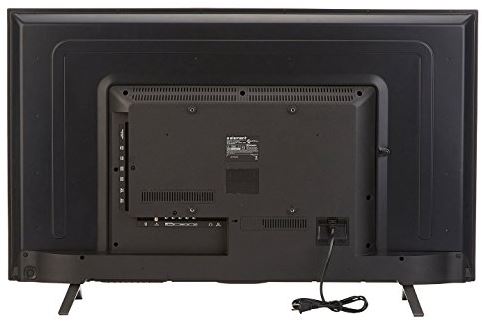 The voice feature is controlled through Amazon’s Alexa service. Alexa makes it easy to control you TV just by speaking naturally to it, but the benefits don’t end there. Alexa can integrate with anything else in your home that supports it, and can also access several web services.

Want to know the weather? Set an alarm for the morning? Start a load of laundry in your smart washer? All of these things can easily be controlled through Alexa. This service has been on the market for a while, and it’s heavily integrated into almost any piece of smart hardware you have in your home.

You need to use WiFi to connect with all these features, but as long as you’ve got that then you’re all set up to control your environment from the comfort of your couch.

Although some consumers use Netflix exclusively for their content, most of us have at least one other video source. But even if your TV stand is loaded with equipment, you’ll have enough ports to connect everything you own.

There are four HDMI ports. All of them support HDMI 2.0 and HDCP 2.2, which allows the playback of 4K content. One of the ports supports ARC. ARC stands for Audio Return Channel, and is commonly used for sound bars and amplifiers. It allows you to use a single HDMI cable to connect your sources. The ARC port outputs only sound to your speakers, so you don’t have to have cables running everywhere.

There are also two USB ports available. One of them is USB 3.0, which allows you to load data off an external hard drive, or any other high bandwidth application. The HDMI 2.0 port is generally used to supply power to devices like a Chromecast, but you can also transmit files – although at a slightly slower rate. 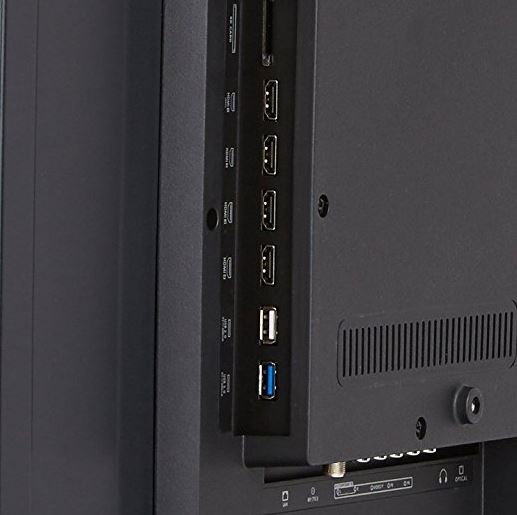 An Ethernet port is provided for internet, although 802.11 AC is supported. The wireless chipset does support MIMO, which allows you to transfer tons of data (such as 4K content) without slowing down the rest of your home network.

Bluetooth 4.1 is supported for connection to peripherals. A2DP, HID, and SPP are all supported, so you can use Bluetooth remotes, speakers, and video sources where available.

Visually, Element designed this TV to be appealing, but unassuming. The bezel around the display is incredibly thin, and the low profile stand definitely has a minimalist feel to it. Other than a single Element logo on the bottom, the enclosure is fairly plain. 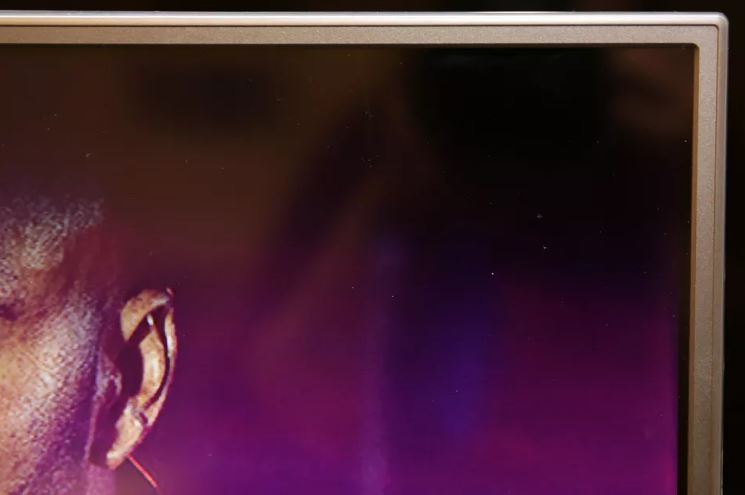 The TV isn’t the thinnest on the market, but it definitely gives off the appearance. The edges of the TV are ultra-slip. All of the hardware is housed in a box on the back, that sticks out a few inches.

The back of the TV is also pretty clean looking. There are a few vents, and some screw holes for a TV wall mount. The ports are side-mounted, so you’re able to place this TV somewhere where the back is visible, and not have a huge mess of cables showing.

For the most part, we’re getting everything we could ask for at a very low price. But there is one feature missing that we would have liked to see – HDR. HDR is increasingly common, providing vivid colors that can’t typically be reproduced on a TV. The screen does produce an image that’s more vivid than usual, but it’s a false HDR. You’re still viewing content on the standard color space, and there is no visible advantage when playing back HDR content. 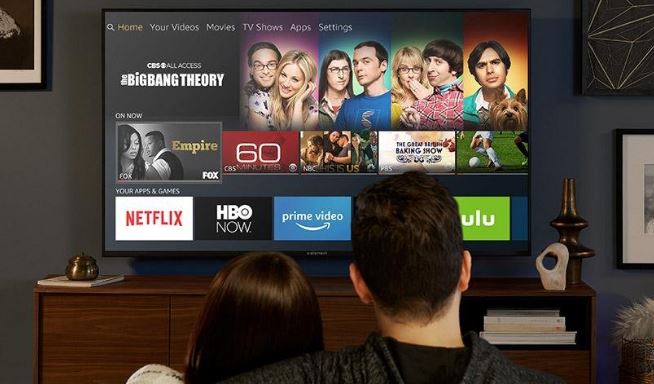 If you’re only looking at the dollars and cents, the Element Electronics 4K Smart LED TV isn’t the cheapest option on the market. But in our eyes, it is one of the best values around. Cheaper TVs tend to make some pretty significant compromises. Often, increasing your budget by $100 can result in significant improvements. But in this case, you really are getting great value.

The video is extremely clear and vivid, and the software interface is well designed and easy to use. You’d probably pay at least 40% more for a name brand version, and wouldn’t necessarily get a better deal.

Whether you’re just looking for a simple way to watch Netflix at home, or a high end Smart TV that can integrate with the rest of your home, we’d highly recommend the Element Electronics 4K TV. In both basic functionality and advanced features, this TV checked all of our boxes. Once you start to dive in to what this TV really can do, you’ll be happy that you upgraded.